Here I am, finally getting around to writing about my walk on the Pennine Way. I finished the 268-mile trail about four weeks ago (!!), and I have so much to say, so I figured I should probably get started.

I didn’t really think I’d blog while on the walk, and mostly because I didn’t have a computer or iPad or keyboard with me. But even if I had, I think it still would have been challenging. My days of walking were long, and usually rather exhausting. Many of my evenings were solo, but it was all I could do to go find dinner, return to my bunkhouse/hostel/tent, read a few chapters of my book and then go to bed… usually by 9:30 (if not earlier). So these reports are, sadly, not coming to you in real time (spoiler: I finished the walk! I made it out alive!!). 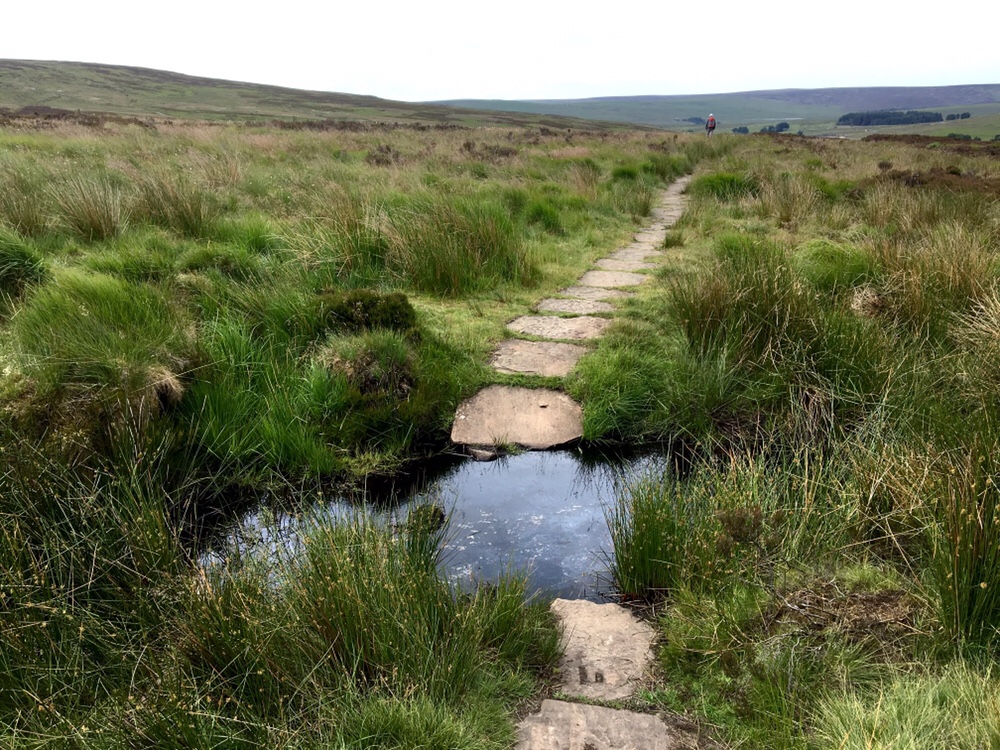 So, let’s begin. My first thought is this, and I probably say it with every trip: travel amazes me. It throws you into these new situations and suddenly you are having coffee with someone you met on your flight, or are now friends with the bus driver, or are sharing a cab with a couple you’d met only minutes before. This kind of sums up my first day of travel, as I left the US for England: I had all of these really wonderful, friendly, helpful connections with the people around me. I lucked out on my flight; I had the aisle seat, a man from Goa, India, had the window seat, and no one was in the middle (otherwise it was a pretty full flight). The man (whose name I now forget) made a few comments throughout the flight, but we mostly kept to ourselves. But when we landed in Dublin and had a two-hour layover, he suggested we go find some coffee together, and I agreed. Just like that I had a new friend, and we spent the time talking about travel. He was intrigued by my long walks and I answered lots of questions, and it was the perfect thing to help with my transition from regular life into my summer adventures.

Next step: getting to London and catching a train to Edale. I’d made the train reservation months before but for some reason I didn’t give myself much time to get from the airport to my train, especially not with all of the errands I needed to do: ship a box of extra luggage up to Scotland, purchase a SIM card for my phone, find a grocery store to stock up on food for the first few days of the walk. The only thing I managed to do was ship my extra luggage, and I made it just in time for my train. One of these years I’ll remember what it’s like to not sleep on the flight and to arrive in Europe with jet lag, and maybe I’ll actually give myself an extra day of adjustment before I start a long walk. (One can hope). 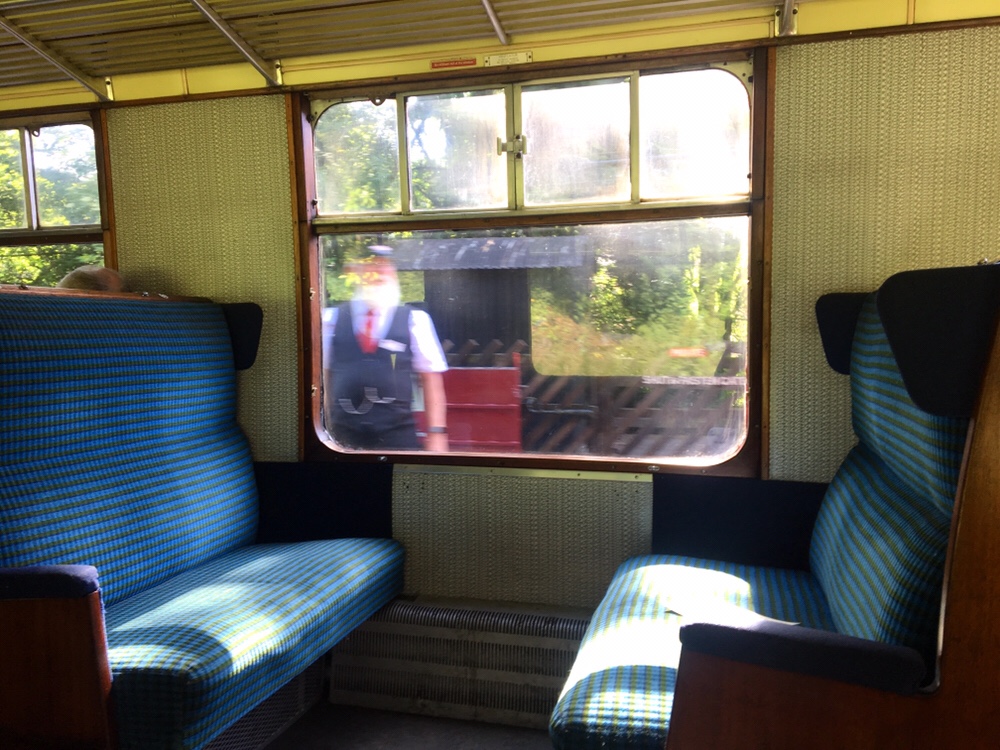 This is a good place to note that, in the flurry of shipping some of my things ahead to Scotland, a few items got a bit mixed up. I had my backpack and smaller day pack and packing cubes and gallon-sized ziplock bags spread out in the corner of a small post office, trying to very quickly load my pack with my hiking stuff. I was sweating from the heat and anxious about catching my train, and for the most part I got things where they needed to be, with a few exceptions: all of my pens went in the box to Scotland (this would prove to be very annoying over the next few days, not having a pen). So did my bag of Sour Patch Kids (my hiking candy!!). On the other hand, in my hiking pack was a navy blue men’s sweater, that I was returning to a friend later in my travels once I got to my writer’s retreat. That’s a bit of a story in itself, but I realized that I’d forgotten to remove the sweater once it was already too late, so it meant that I’d need to carry it across England.

In the end, I made my train and arrived in Sheffield, where I had to get off and make a connection to go the rest of the way to Edale. But when I looked at the displayed timetable I didn’t see my train posted. It turns out there was a strike (happening on that particular Tuesday, along with Thursday and Saturday), so my train wasn’t running. Ahh, my first challenge! I was directed to a bus station and a couple of very friendly workers helped me figure out the two buses I would need to take that would hopefully get me to Edale. The first one, the #272 from Sheffield to Castleton was fine, but when I arrived in Castleton there were no other buses in sight. 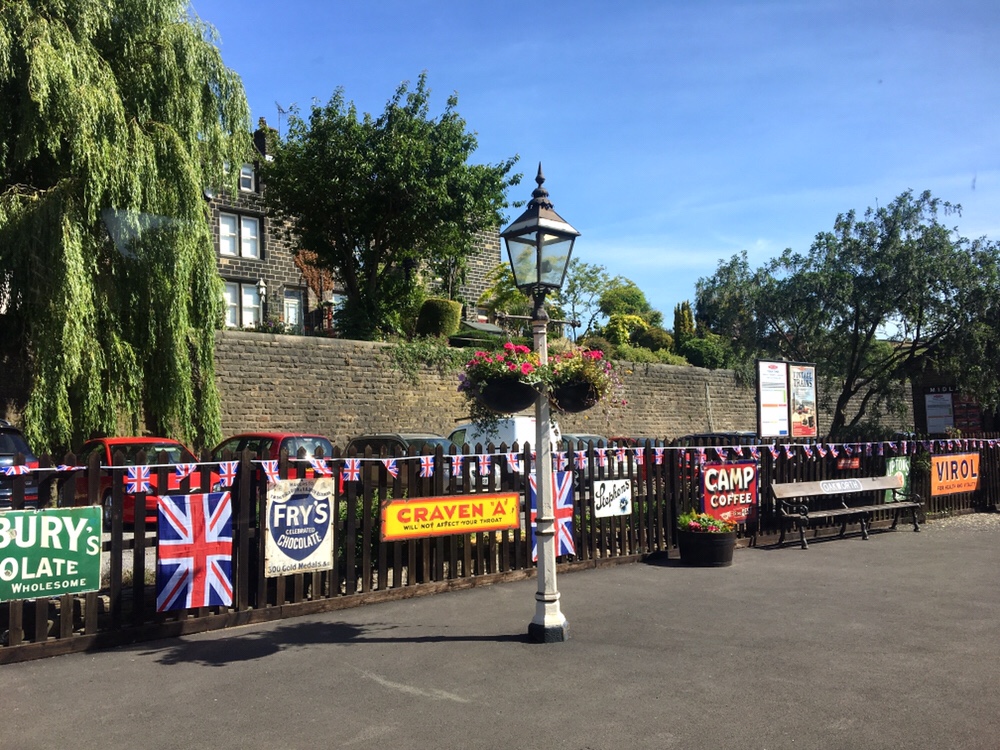 My bus driver, who was waiting around until he could leave for his next run, suggested I look up time tables on my phone. I explained that my phone didn’t have any data (the first time on this trip that a SIM card would have come in handy!!), and after a few minutes he came over with his phone and tried to help me find my bus. We looked and looked and finally he said, “I’ve been driving buses for 30 years, and if I can’t figure this out then I think you’re out of luck.”

There were two people waiting nearby, they had backpacks and were reading signs and scrolling through their phones. They’d been on the first bus with me and I thought I overheard one of them mention the Pennine Way, so I walked over and asked if they were trying to get to Edale.

“We are!” exclaimed the man, whose name was Nigel. “We’re going to walk the Pennine Way.” He was with his wife, Judy, and the three of us talked about the walk and then how we were going to get to Edale. Eventually, Nigel found a cab company that was willing to drive out and pick us up, and before long (and after I ran into a small shop and bought a sandwich and a large bottle of water for the next day), we were on our way. 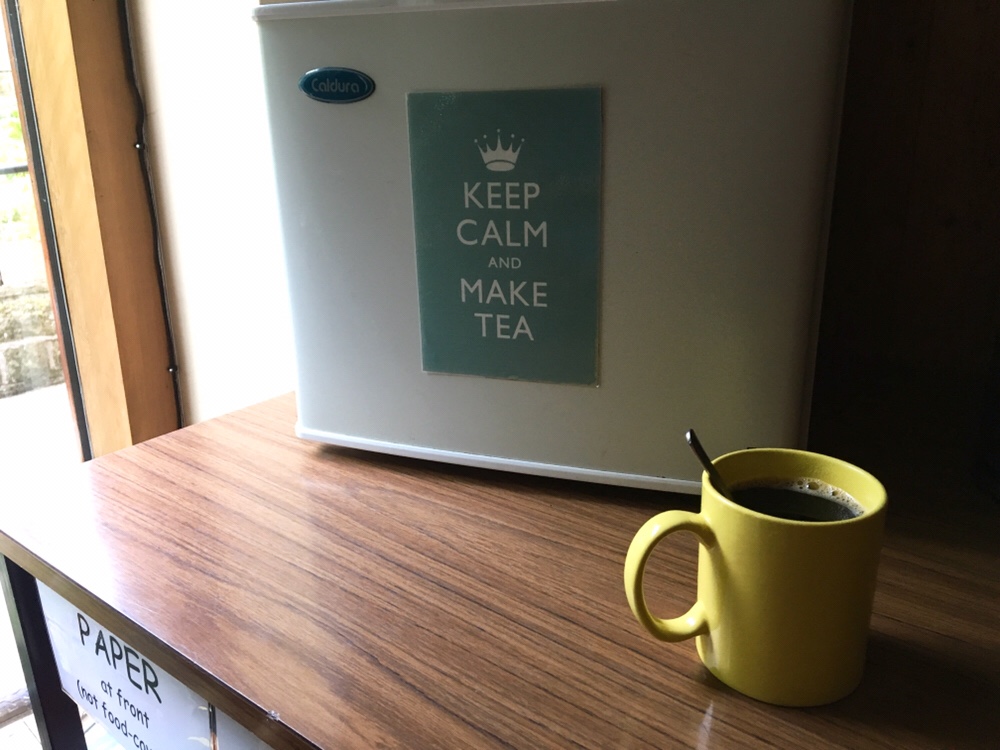 I was tired when I finally arrived in Edale but I had the adrenaline that travel and a new adventure always seem to provide. Our taxi driver was very concerned about the fact that I needed to walk an additional 10 minutes down a small path to get to my bunkhouse; she suggested that she could drive me there but I insisted on walking. After all, soon enough I’d be starting a much longer walk. 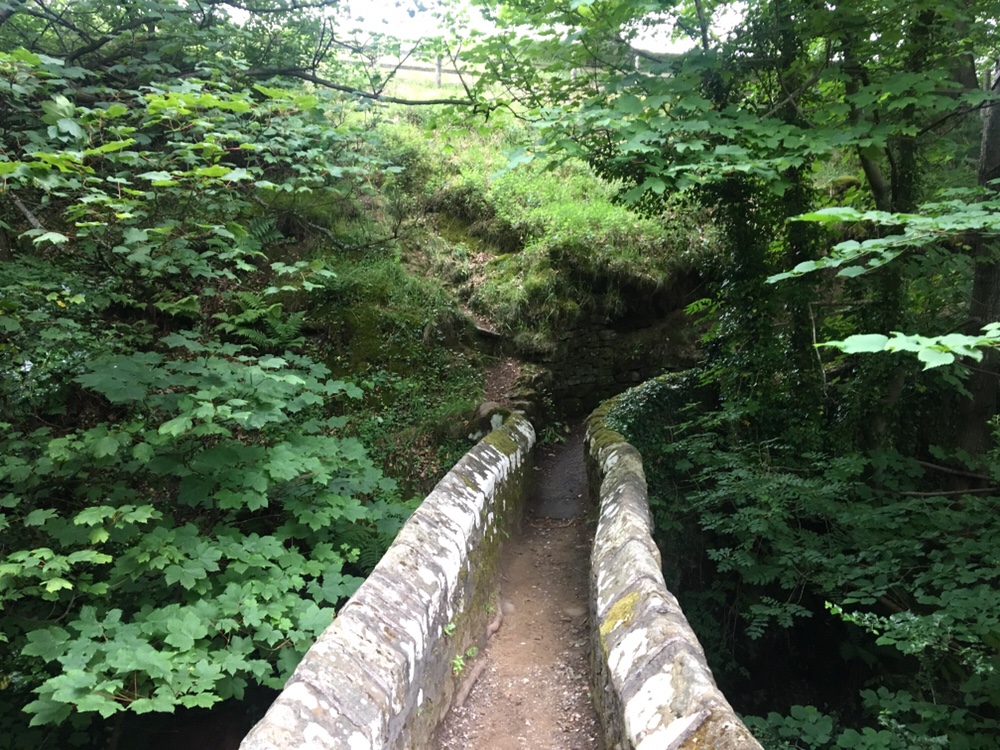 I’d made a reservation for the Stables Bunkhouse at Ollerbrook Farms, and I had the place to myself (something I would soon discover to be a trend on the Pennine Way… I think bunkhouses are the way to go!). My room had a window that looked onto a field of cows and the hillside beyond, and the kitchen had a fridge where I could keep my breakfast and lunch cold for the next day. I grabbed dinner in a nearby pub and ate to the sounds of a World Cup game on TV (Russian vs Egypt), then made my way back to the bunkhouse and was in bed by 9pm. 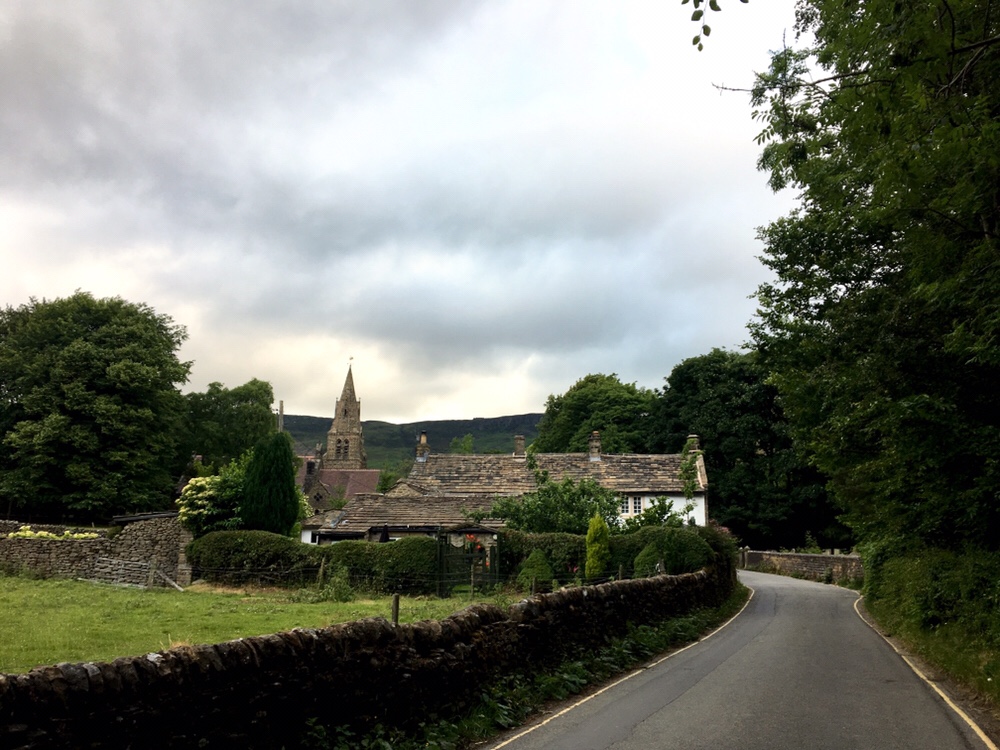 Despite the challenges, I thought this first day was a really good way to kick off my adventure. Things hadn’t gone quite according to plan, but it all worked out okay, especially with the help of others. I thought that maybe it was all a bit of an omen- would my walk have more challenges ahead? (For sure). Would I meet kind people, would I rely on them for help? (Yes, and yes). Would I have to sometimes readjust, and come up with a Plan B? (Oh yeah).

And these are all reasons that I travel. Real life has some challenges, but for the most part I know what to expect. I have my routines, I have my people. Sometimes, it’s just really good to shake things up, to go some place new, to throw yourself into the unknown. To go off, and have an adventure.

And this one had just begun. 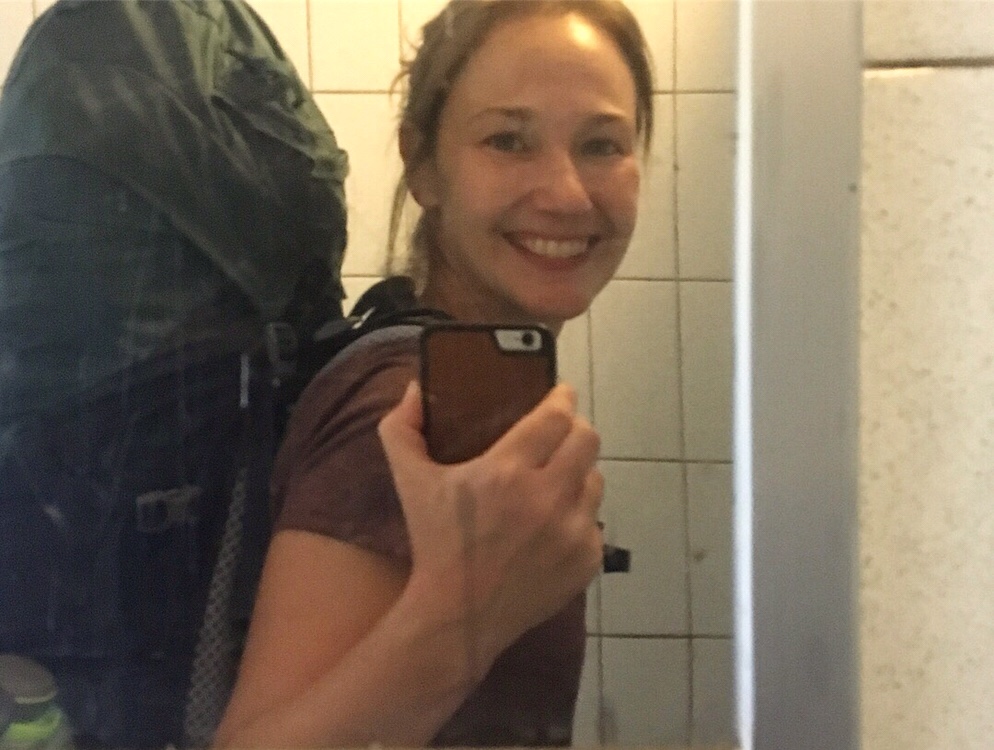 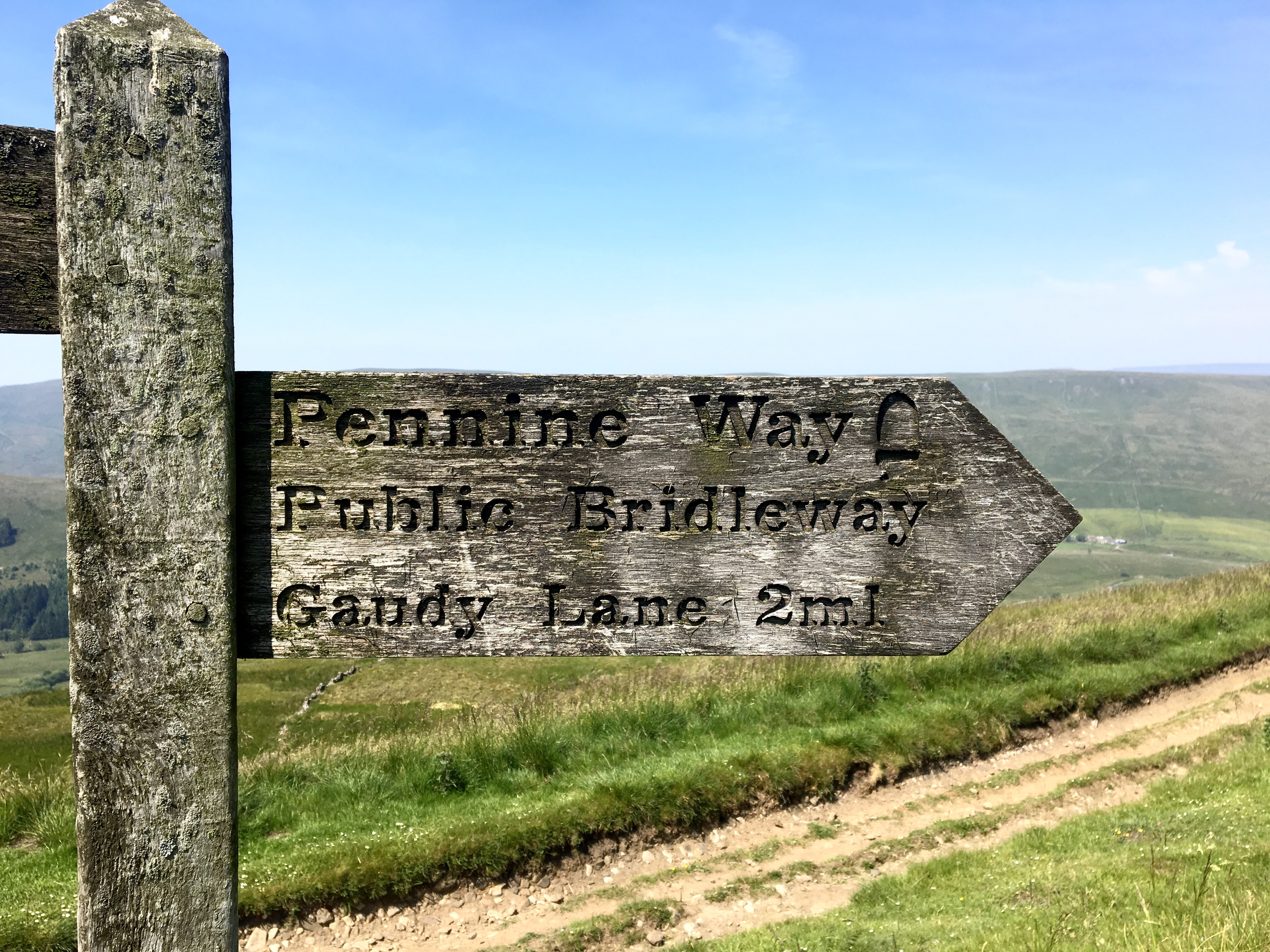