When setting out to do a long-distance walk, there are going to be all kinds of days. Days when the rain obscures the beautiful views (like this, and this); days when you feel sick, or tired, or unenergized; days when you forget your passport and have to take a taxi all the way back to where you started.

But then there are the days when everything just seems to work out. The cafés and pubs are open, and they appear just when you need them. You pass an honesty box with ice cream in the middle of a warm afternoon. The skies are blue. Your legs are strong. The day ends with a pint of beer at a bench in the sunshine.

And this kind of perfect day is what I had on my eighth day of walking the Pennine Way. Blisters? What blisters? I left my lodgings at the Green Dragon Inn to another clear, crisp morning, the sun slanting through the trees and the tombstones in the little cemetery. 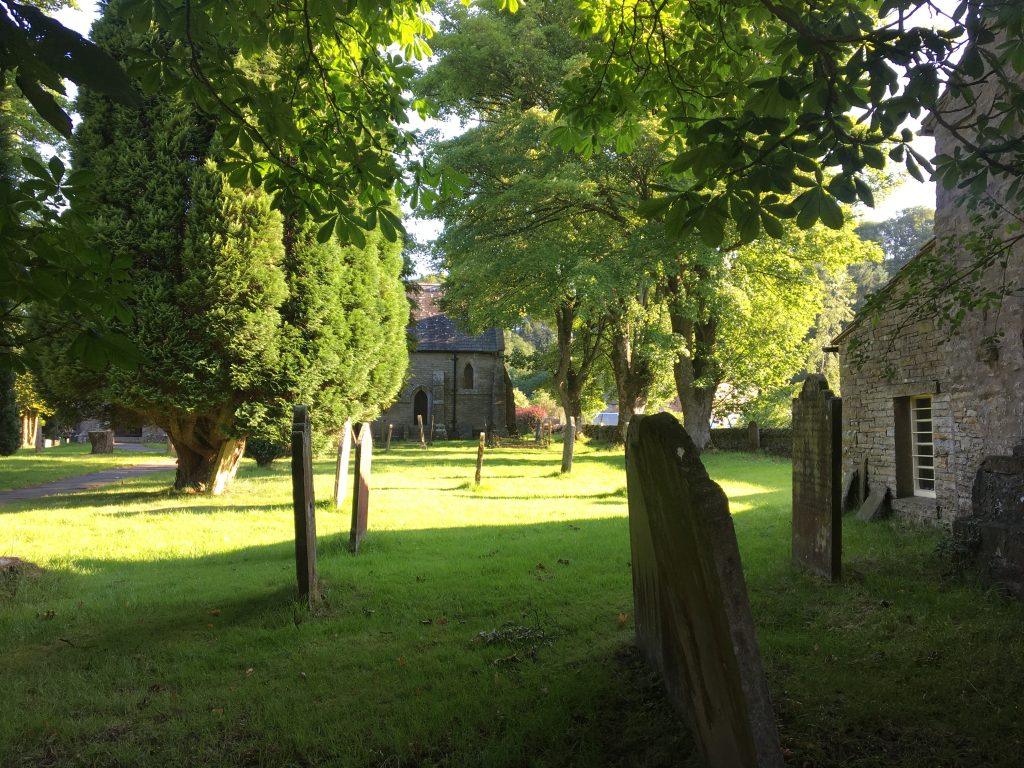 Almost immediately after leaving the village I began the long and steady climb up to Great Shunner Fell, an ascent of 2349 feet over 4.5 miles.

I’d been dreading this climb. So far, I’d found the Pennine Way to be really challenging, due to a combination of a heavy pack, blistered feet, and difficult days. So I expected the climb up to Great Shunner Fell to be more of the same, but what a surprise to find that I moved steadily, almost easily! The four miles passed without too much effort, and suddenly I was at the rocky shelter at the summit. 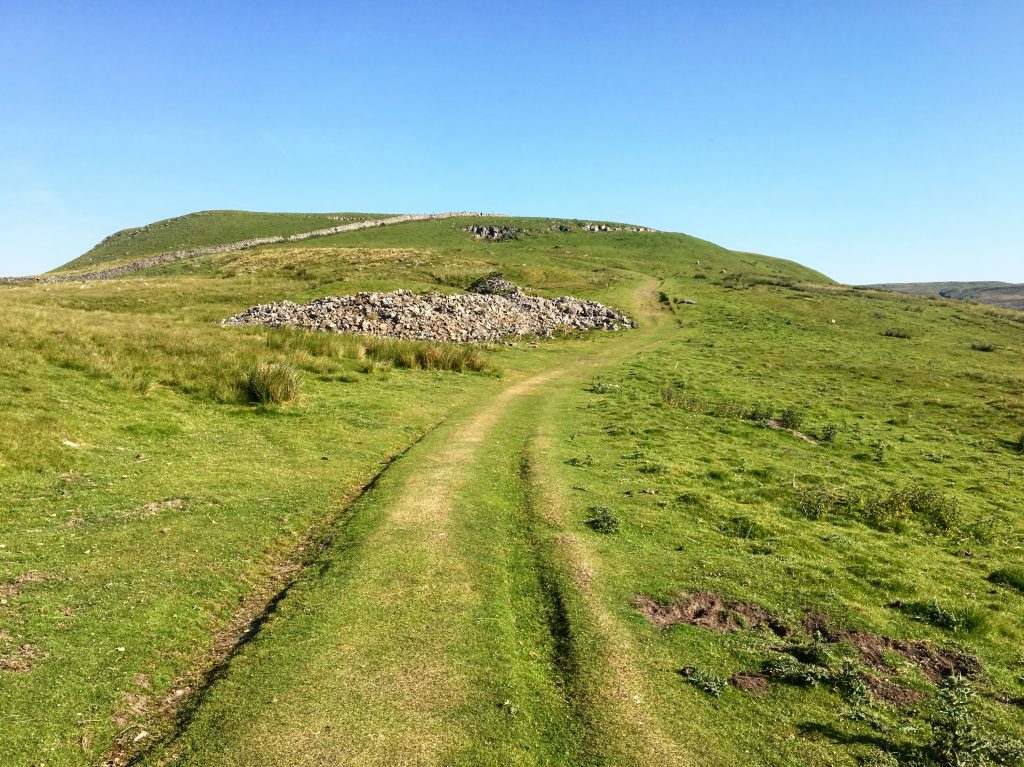 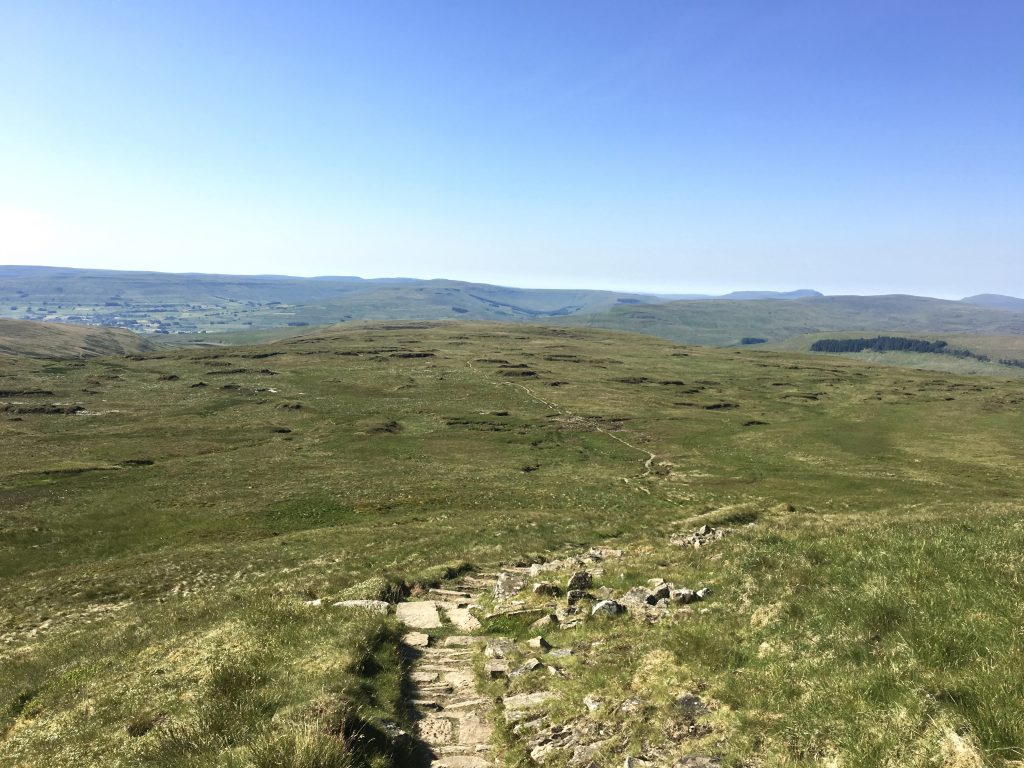 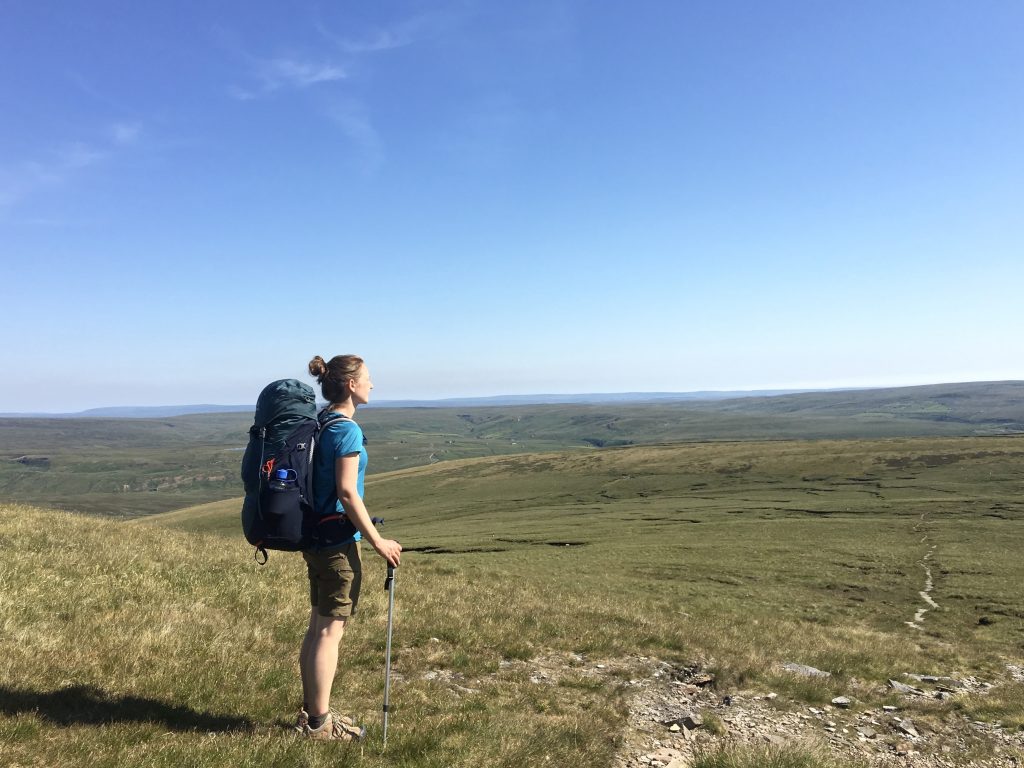 I sat for a few minutes, had a snack, and silently congratulated myself for a solid walk. But I didn’t need to stop long because I was feeling good, so I continued down an easy path to Thwaite, where I arrived just in time for the café to open. I assumed that since the café was 7 miles into the walk that I would be here in time for lunch, but I was making good time and it was too early to eat. So I ordered a mocha- a large, delicious, chocolate-y coffee drink- and sipped it slowly while resting my feet.

Before leaving the café I ordered a sandwich to take along with me, and then I was off again, a steep climb up Kisdon Hill, past sheep and little stone huts and waving fields of bright green ferns. I walked on a narrow dirt trail, winding past farms, up and up until the path flattened out and my views stretched over the valley below. 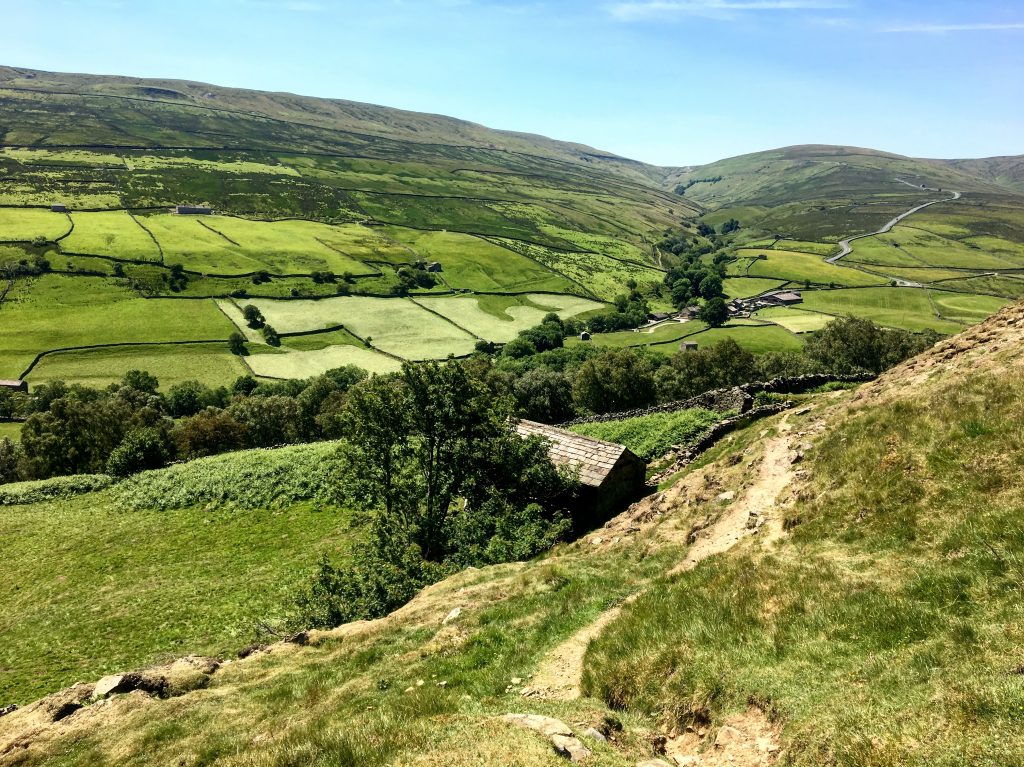 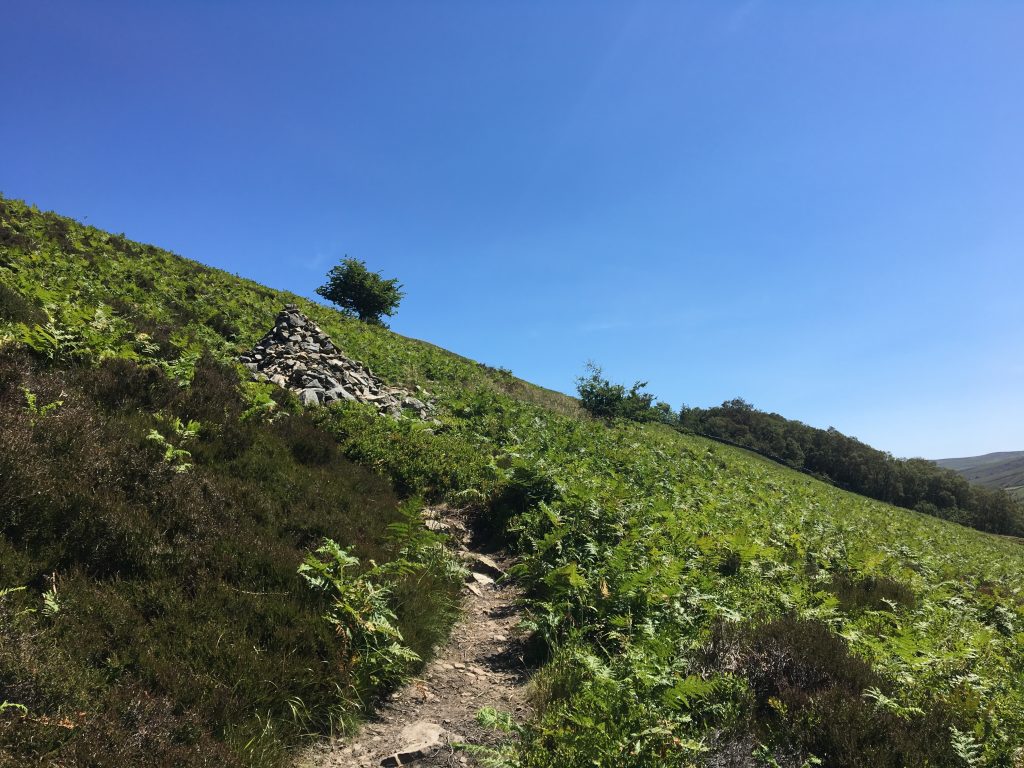 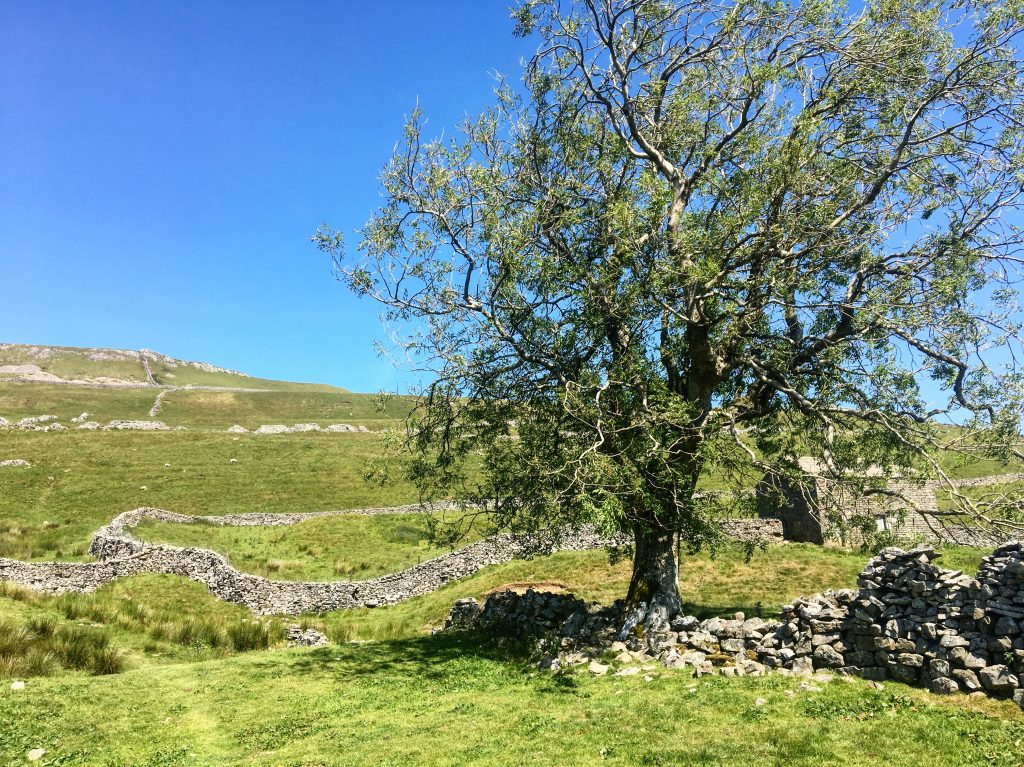 I remember feeling so good as I walked, so happy. For the first time, my mind ran free: I didn’t have to think about the pain in my feet, or worry about losing the path, or focus on how tired I was or how heavy my pack felt.

Finally, the walking felt good, and easy. I’d adjusted to the weight I was carrying on my back, my legs were strong. The sun was shining and the path stretched out before me and I didn’t have a care in the world. 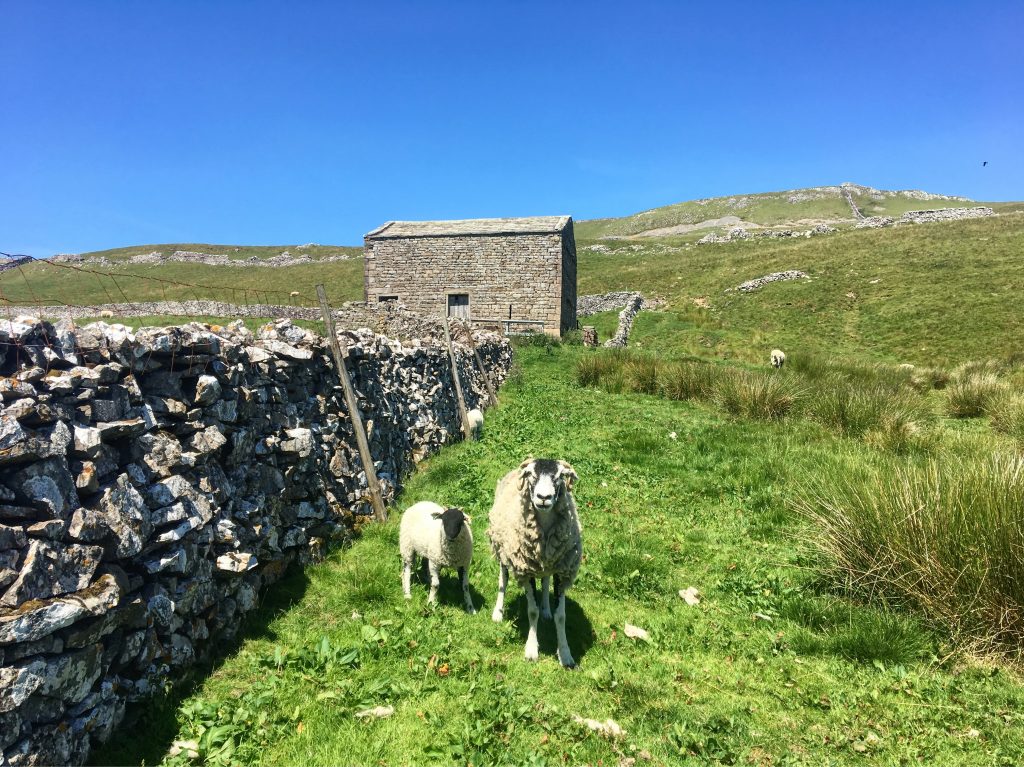 Soon enough the path led down to Keld, where I found more people than at nearly any other point on the Pennine Way. Keld is where the Pennine Way overlaps/intersects with the popular Coast to Coast trail (one for the future, perhaps?), and it’s a popular stopping point. I would be walking another four miles to Tan Hill Inn, but I couldn’t resist a stop here. I found a bathroom, a little shop selling small tubs of ice cream, and a tucked away “Well-being garden” (isn’t that a charming name?) where I sat on a bench, ate my sandwich, then my ice cream, and looked down over the village. 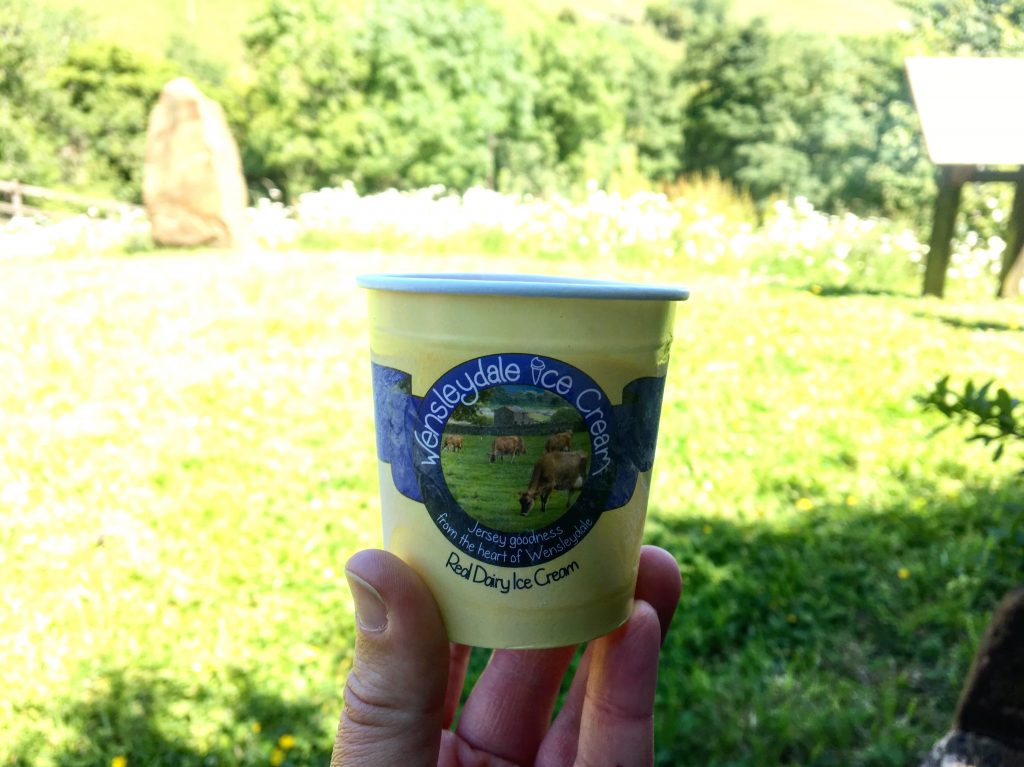 The rest of the walk to Tan Hill Inn was a bit of a slog, and I was beginning to feel the strain in my legs, but I just kept going (what else is there to do?) and before long a building appeared, far in the distance.

The Tan Hill Inn is known for being the highest pub in Britain, and the building sits totally alone and isolated in the vast moorland of the Yorkshire Dales. I could see it from at least a mile away, just a speck in a wild and lonely landscape. The building dates back to the 17th century, and in the 18th century was used as an inn for the miners. Supposedly there used to be smaller miner cottages scattered around the inn, but they were all torn down in the early 20th century. Now the inn is all that’s left, and it’s become a destination for walkers, bikers, tourists and, according to the website, “bohemian like-minded individuals”. There’s an open fire that’s been burning for over 100-years, and scores of ghost stories as well, but I didn’t know any of this when I walked up. 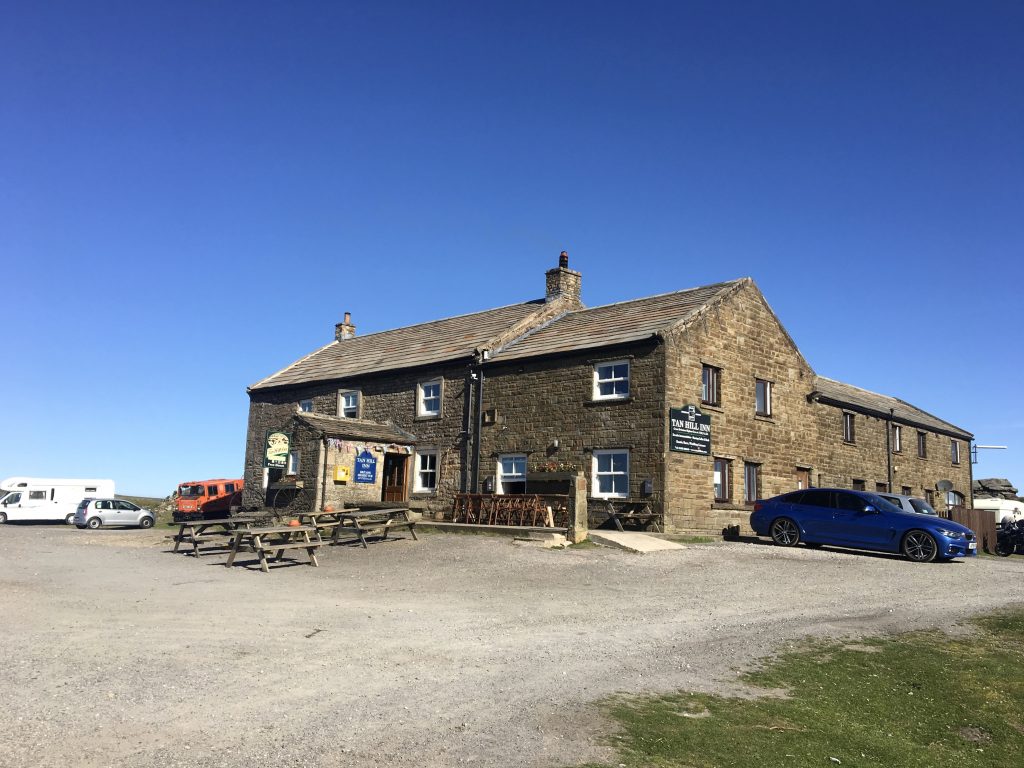 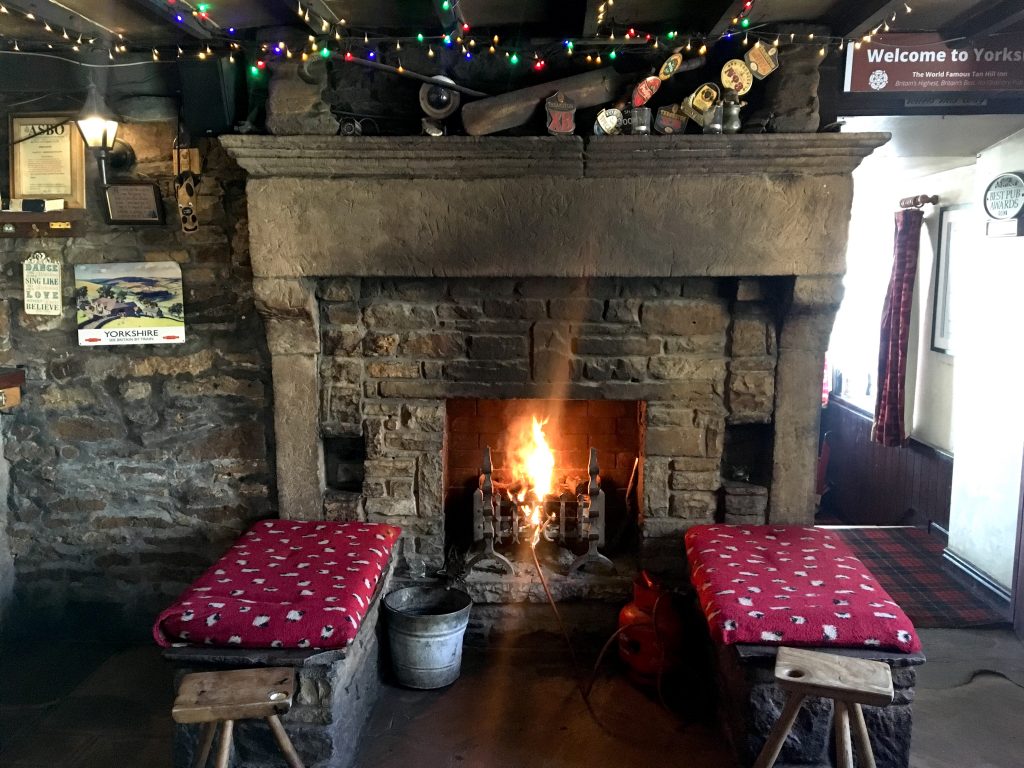 I just saw the picnic tables in the sun, lots of people milling around, drinking beer, laughing and telling stories. Inside the pub there were several cosy dining rooms, and after checking in at the bar, I was led up to my bunk room. (In addition to two bunk rooms, there are also nicer Inn rooms as well as campsites out back).

I’d reserved a bed in one of the two bunk rooms, and as usual, had the place entirely to myself. There was a towel on my bed and breakfast would be provided the next morning- I was beginning to think that I’d cracked the secret of the accommodation on the Pennine Way! Bunkhouses: less expensive than b&bs and more comfortable than camping, and if the timing is right, you’ll have the rooms to yourself! 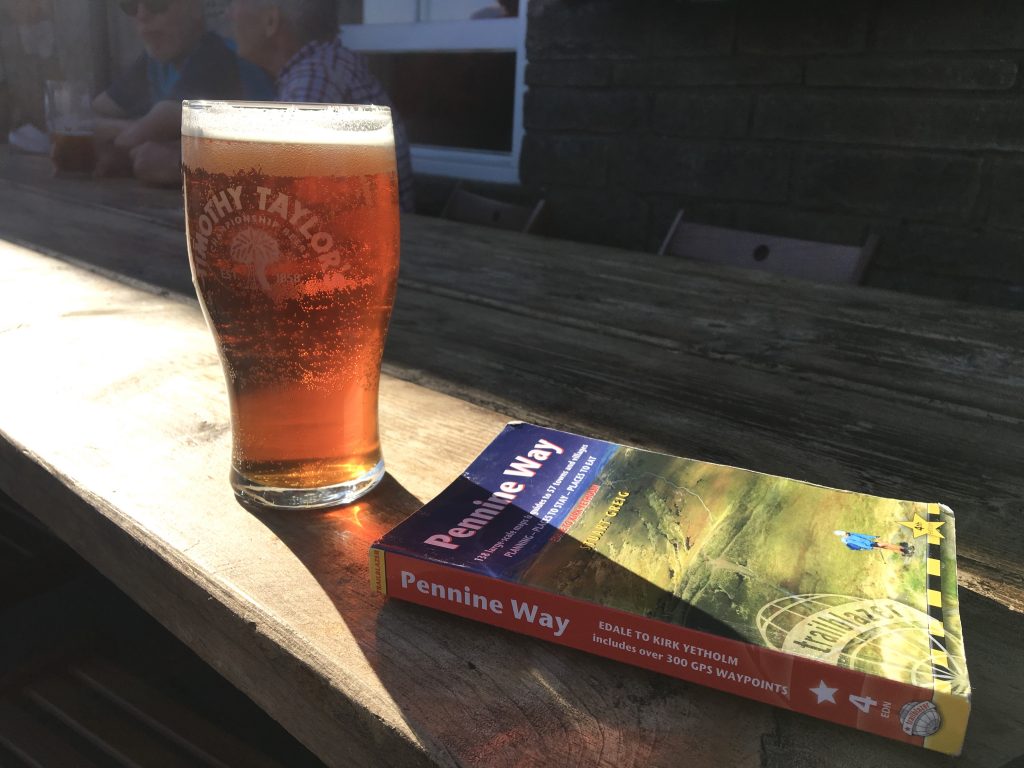 I didn’t encounter any ghosts that night- none that I knew of, anyway. Instead I settled in for a relaxing evening: a beer in the setting sun, a warm meal in the pub, a cool breeze from the open window next to my bunk bed, where I tucked myself under the blankets, nibbled on a ginger cookie, and opened to a new chapter of Jane Eyre.

A day of walking doesn’t get a whole lot better than that.