I’m back from Italy, and the return has been quite a welcoming. This morning I dragged myself out of bed after an incredibly deep sleep, loaded my work bags into my car, cleaned the falling snow off the windshield, and then my car wouldn’t start.

I sat in the driver’s seat of the car, turning and turning the key to see if something would catch, watching the snow quickly filling up the windshield again, and I wondered if I’d made a mistake. Maybe I shouldn’t have gone to Italy at all. Maybe I should have stayed at home and spent more time with my family and friends. Maybe I should have used the money that I spent on the trip to save up for a new car.

Italy was interesting. I’m sure there’s a better word that I could use, but it’s the best I can come up with. I didn’t go to Italy to eat amazing food or to see beautiful towns and cities, or to bask in the glow of famous art and architecture. I got to do all of that, but the reason I went to Italy was to see what the connection with my Camino friend was all about.

I don’t think anything about getting to know this friend was ever going to be simple, and it’s not just that we live in different countries. He’s leaving in a few weeks to travel around the world, so the possibility of building something with him, of having anything concrete, was always very slim.

And knowing this made the decision difficult for me. Why even see what there could be if I was almost certain that there wouldn’t be anything?

But the thing was, I was almost certain that there wouldn’t be anything. Almost. If I’d been totally certain then I wouldn’t have gone. I would have gotten my car checked out before it left me stranded, I would have spent time with my oldest friends, I would have relaxed and had a peaceful vacation.

Instead, I traveled thousands of miles to see if what I felt could have some greater meaning for my future. I think I have my answer- which is no- and maybe it wasn’t the answer I was hoping for. But it doesn’t mean, not for a second, that I regret going.

The trip was beautiful, even if it was a bit different than what I expected or hoped for. There was this one moment in particular, when I was feeling down and sad. I was in Florence, standing in line for the Uffizi Gallery. I’d already been in line for an hour, and noticed a screen that said the wait would be an additional 3 hours. I was freezing, I was conflicted about my feelings, and for a moment, I wondered what I was doing there. In that line, in Florence, in Italy.

And then a woman came by and asked if I wanted her ticket, which was a reservation for a timed entry that would let me into the museum immediately. I bypassed the line, walked through the crowded galleries and then suddenly was standing in front of the bust of a Roman Emperor, and I recognized it instantly. I’d studied this bust of Caracalla in my freshman year art history class, and for some reason had been captivated by him. To stand in front of this bust rather than study a photo in a book reminded me of why I travel, of the places I had vowed to visit when I was young. Later I gazed up at the Duomo, I studied Ghiberti’s Gates of Paradise, and I felt awed.

I had lunch with my friend in a tiny restaurant overlooking the Arno river and the Ponte Vecchio. Somehow I had the perfect seat: my view was nothing but river and bridge and beautiful buildings and sea gulls flying by for the bread that the owner of the restaurant was throwing out the window.

Later we watched the sun set, and I leaned against a stone wall and stared out at the buildings of Florence, the city blanketed in a soft pink light.

So this morning, as I was shivering in the cold snow, cranking my engine while a guy with a tow truck banged on my car and lights on my dashboard blinked crazily at me, I didn’t wish that my life could be any different.

I’ll get my car fixed. Eventually I’ll buy a new one. And one day, maybe years and years and years from now, I’ll go back to Italy. I’ll stand in the Piazzale Michaelangelo and look out over the city and remember the last time that I’d been there. The time when I went to Italy to follow a gut feeling and take a risk and to see about the possibilities of my future. I think remembering this time will always make me smile. 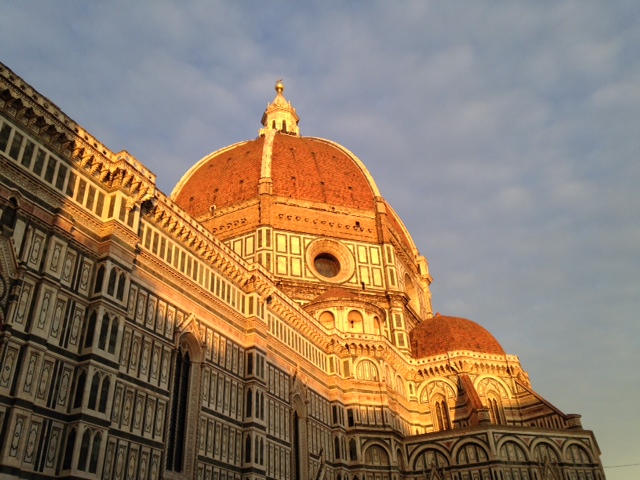 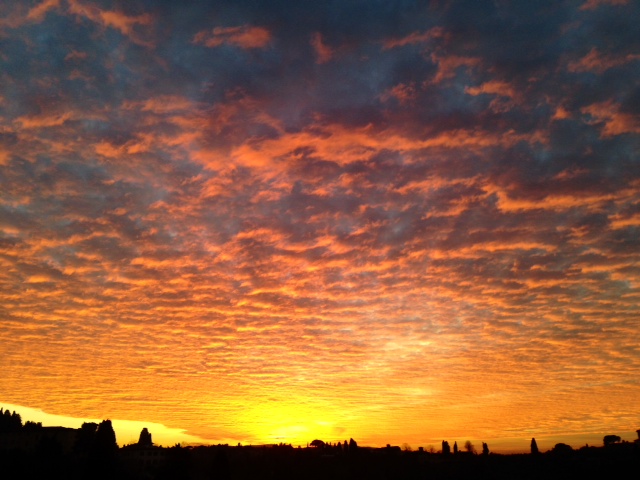 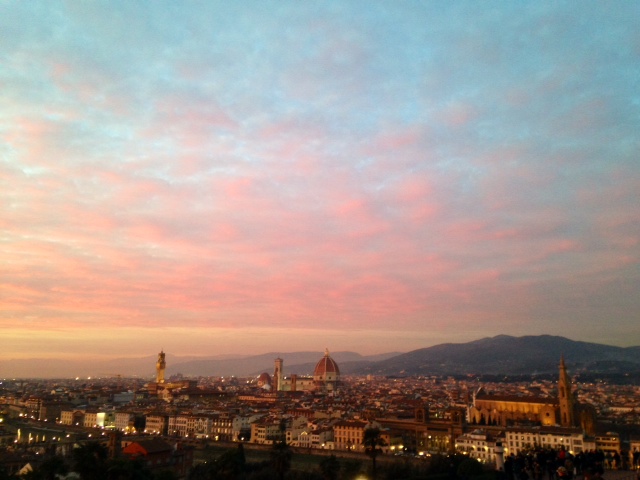