But this wasn’t always the case. By the end of my walk on the Camino Frances, I was getting tired of the food. It happened all at once; one day, I was marveling at how I would never tire of tortilla or tuna or pilgrim’s menus with their slabs of meat, french fries and ensalada mixta (usually a very, very basic salad). By then suddenly, a few days from Santiago, I lost my appetite. Don’t get me wrong, I was hungry, but nothing seemed appealing. Maybe it was having eaten the same food for 30 days, or maybe it was being so close to the end of my pilgrimage (in those last days my body hurt and my mood was a bit off and I didn’t want to eat the foods I had been loving for weeks. My sub-conscious telling me that I didn’t want my journey to end? Or that I was ready to end? I’m still not sure).

In any case- now- I’m craving those Camino foods again. I was on a long walk yesterday, and while it would be nice to always be thinking deep thoughts when I walk, or maybe puzzling through some piece of writing that I’m working on, the truth is that I’m often thinking about food. And yesterday I was thinking about Camino food, and all of the things I’m looking forward to having again when I return to Spain.

This isn’t going to be a comprehensive post about the food of the Camino or all of the unique and wonderful things you can find in the north of Spain (although it will be picture heavy… wow, did I take a lot of photos of my food!). I certainly got to eat some incredible food while on my pilgrimage, but there was a lot I missed, as well. I’ve always been satisfied with simple food, so for the majority of my Camino, I was happy with coffee, bread, wine and a pilgrim’s menu. Sometimes I read blogs about what other people eat on their Caminos and I wonder: were we walking the same path? Where in the world did they find that incredible meal?

Here’s a run-down on my Camino eating routines: I’d wake up early and try to be walking around 6:30am. If possible, I would have a café con leche before I started walking, if I could find an open bar in the town I’d stayed in the night before. If that wasn’t possible, I would stop at the first open bar that I would come across, sometimes 30 minutes away, sometimes a few hours away (those mornings were tough). After walking for an hour or two, I would always eat something at that first stop: either tortilla (egg omelet with potato), a croissant, or toast. I’d walk for another few hours, and then sometimes stop for a second breakfast: sometimes just another café con leche, sometimes another tortilla or croissant or toast if the walk was strenuous or if I was hungry.

If I didn’t have a ‘second breakfast’, I might opt for a pre-lunch ice cream break, on the really hot days.

Lunch was nearly always a combination of food that I had stowed away in my pack. I know that some pilgrims stopped at a bar or restaurant for a sit down meal and a menu del dia (menu of the day, which is a great alternative to the pilgrim’s menu and usually offers a better selection of food). But I didn’t like taking really long breaks and preferred to have a sit-down meal in the evening instead. So I would cobble a meal together with whatever I could find in tiendas (shops) along the way: bread, cheese, ham, peaches, cherries, tuna, tomatoes, crackers/cookies. There was really nothing better than ripping off a crusty piece of bread and dipping it into a can of tuna drenched in olive oil, then biting into a juicy tomato and nibbling on a chunk of cheese. Basic stuff, but so, so good.

In the late afternoons, I settled into a nice routine of finding a place to have a drink and/or some tapas. At first I would go with a glass of red wine, but somewhere along the way another pilgrim recommended a drink called ‘tinto de verano’, basically a summer red wine. It’s popular in Spain and like sangria, but simplified: one part red wine, one part carbonated lemonade (and usually served over ice). The perfect refreshment after a long day’s walk (for this non-beer drinker, anyway).

And dinners were often a pilgrim’s menu (three courses, my choices were usually a salad, some kind of meat/fish with french fries, and ice cream, if available… along with bread and wine), or I would cook with friends if our albergue had a kitchen. The nights of cooking were wonderful and economical, and more often than not we would throw together a big salad with all the vegetables we could find (fresh veggies can be hard to come by on the Camino, at times). 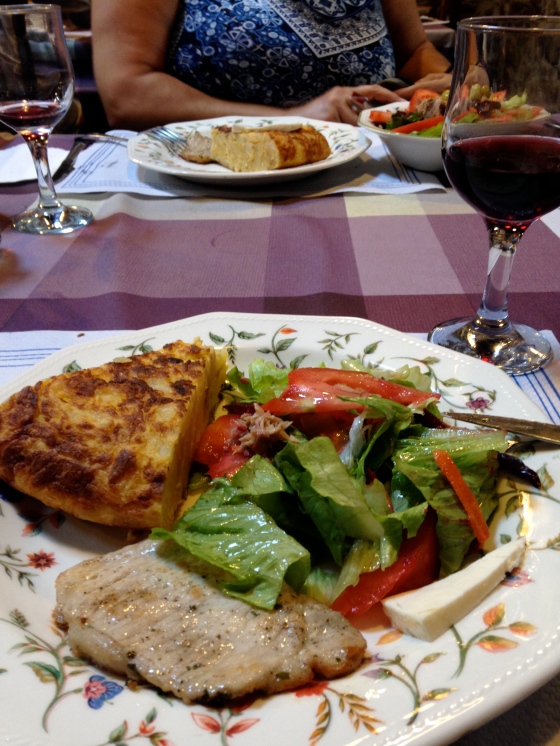 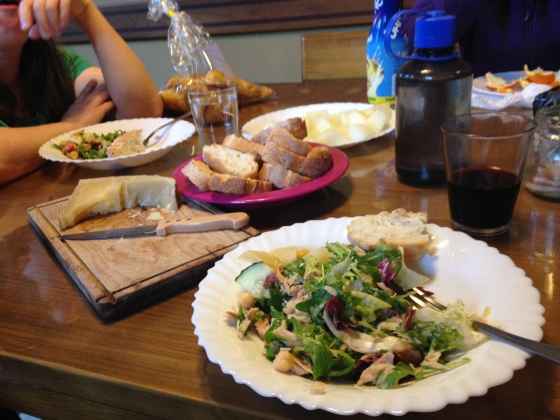 There were highlights along the way, of course. Churros y chocolate at the Cafe Iruna in Pamplona. The wine in Rioja. A local man directed my friend Mirra and I to an amazing restaurant in Burgos, where we split a menu del dia and couldn’t stop raving about the quality of the food. The best plate of grilled veggies I’ve ever had at the O Mirador in Portomarin. A dish of pulpo (octopus) in Galicia.

But hands down, the best meal of my Camino was, in some ways, the most basic. It was before I’d really tasted anything, it was at the very beginning. On my first day of walking through the Pyrenees, I went off the route and found an isolated little spot over a crest and tucked away from other pilgrims. I had bought a jambon-buerre (ham/butter) sandwich at the albergue in Orisson (so technically, this was a French meal, and eaten just before I crossed the border into Spain). And really it wasn’t about the food, it’s about what that meal represented: the first day of a big journey. Sitting, alone and free, somewhere in the Pyrenees mountains. Sunshine, a cool breeze, feeling excited at the start of a big adventure.

By contrast, the worst meal was at the very end of my Camino, 17km away from Santiago. I’d walked a longer than expected day, not ending until after 5pm (which was a very late day for me). I ordered a plate of pasta in the only bar in the “village” where I was staying, and I could barely eat it. The pasta was swimming among bits of unidentifiable meat in an  oily “sauce”. Dinner ended up being sleeves of Oreos and a few glasses of wine. Here is the very unflattering photo of that meal, and my disappointment. 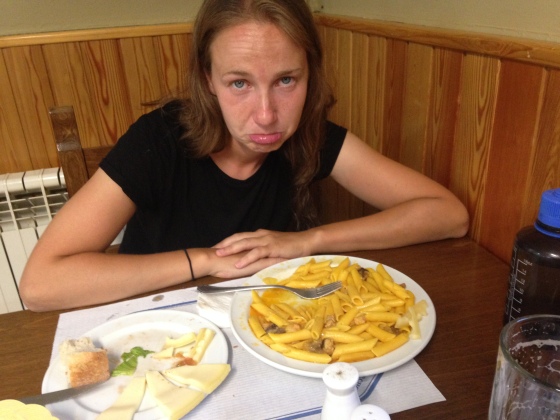 Are there any standout meals from your travels that you can share? Any disappointments? Is there something (like a café con leche) that you dream about having again?