It took me several days, but I’ve finally gone hiking. I thought it would be the very first thing I’d do, that I’d settle into my room at La Muse, look out the window, and promtply run out to the green hills. 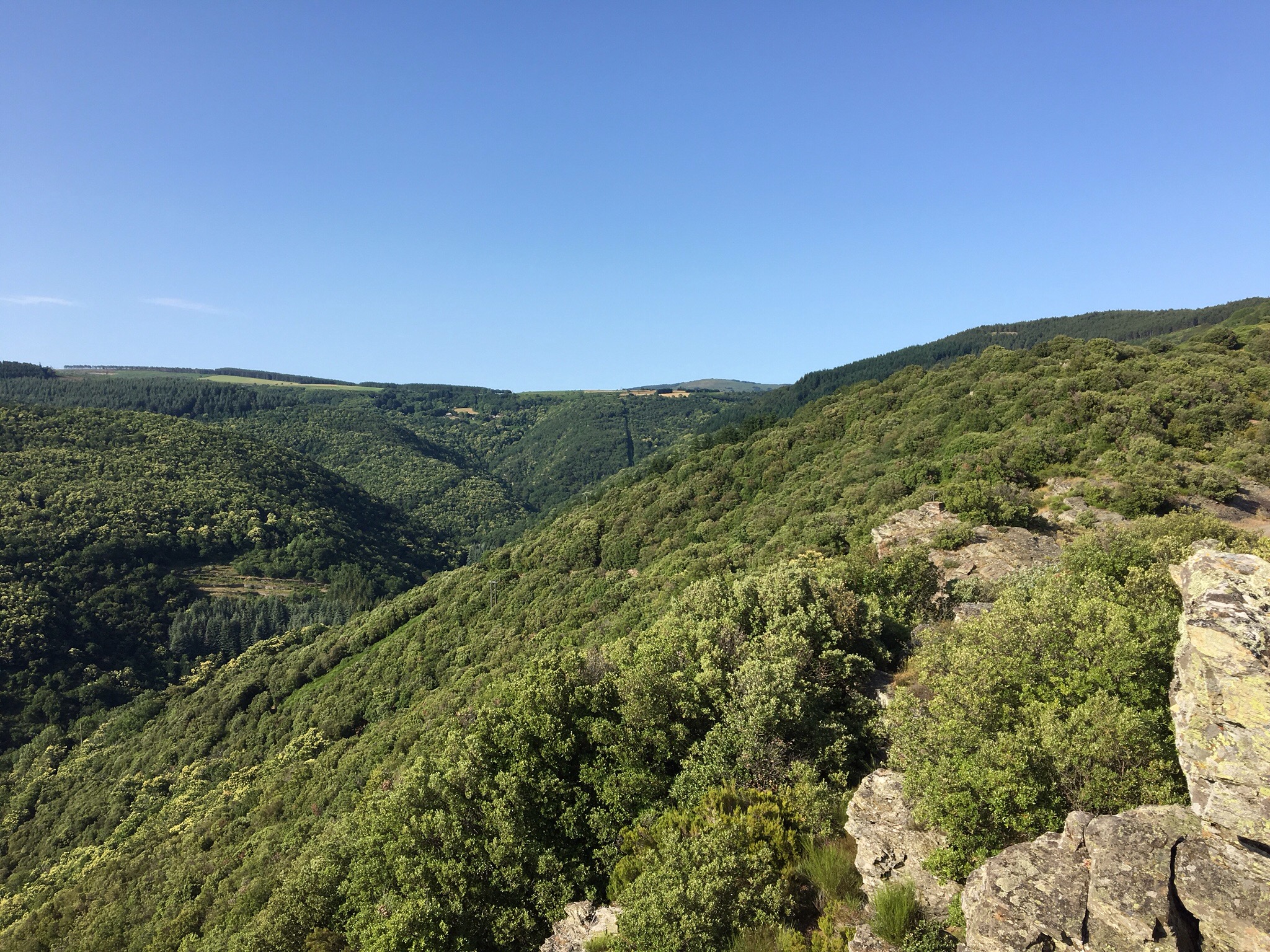 And I wanted to- oh believe me, I wanted to- but for nearly all of this first week at the retreat, I’ve been fighting a cold. At first I thought this was a good thing, that it would give me more time to write, but mostly it’s just been frustrating. I want the energy to write and to go hiking.

My energy has been coming back, and so for the last two days, I’ve gone out to explore the mountains that I fell in love with three years ago.

Like so much else here, the memories come flooding back, and it almost amazes me what I can remember. As I hiked up the steep, rocky hill on what I call the “Lastours view” hike, it hits me with such a strong sense of knowing: there’s a spot coming up where I like to stop and rest. The spot with the tree that’s just tall enough to provide some shade, the one that casts its shadow over a rocky wall that’s the perfect height to rest against- ah yes, there it is. I’m out of breath, and like I always did, like I probably always will, I stop here and drink some water.

After that first hike I began to think that I wouldn’t exactly be having adventures out here this time around; that I’ve already done all of the hikes, that I know this terrain. But then I found myself setting out yesterday, not exactly sure where I wanted to go. I stopped by the source at the bottom of the village to fill up my water bottles (I love that there’s a place to get water that’s actually called ‘the source’ and it’s the first thing that people say to you when you arrive here: “Have you been to the source yet?”). Then, since I’m already down here, I decide to follow a nearby path that winds up and out of the village, the one that heads towards the lake.

I don’t want to walk all the way to the lake today (I haven’t been yet and there’s talk of a group going later in the week), but I know that the path will connect me to a track that can take me over the mountain. So I venture off, gradually making my way up and up on this shaded and narrow trail through the woods.

Almost immediately, I’m not having much fun. There are trees and bushes on either side of me and spiders have cast their webs across the trail and with nearly every other step, I’m walking staight through the stringy webs. I wipe against my arms and legs constantly, trying to rid myself of the invisible strings.

Soon the path curves and opens up and I remember this from last time: it’s a wide and grassy path, hot in the sun. This time, too, it’s hot in the sun and the path is rather wide and grassy, but it looks like it hasn’t been maintained in the three years since I’ve been here last. Wildflowers and weeds shoot up from the ground and take over the trail almost to the point where it’s hard to know if you’re still on a trail or not. And really, this wouldn’t be so bad if there weren’t stalks of thorns, too. Fields of thorns, as I came to call them, endless fields of thorns.

To be fair, I’d been warned. Another resident, the film editor, has been hiking a lot. He’d arrived a few days before the rest of us and only stayed a week- he’s already gone. But on his last full day he hiked up to the lake, taking the same trail out of the village that I was on now. I asked him about the hike and he gave me some tips, adding, “Oh, if you have long pants, you might want to wear them.”

He said his legs got a little cut up but he really didn’t mind, and that was it. I didn’t think much of it, just assumed that there were a few overgrown sections, that it probably wasn’t that bad.

Let me just say: I should have worn long pants. By the time I got out of the field of thorns, there were scrapes and cuts all over the bottom half of my legs. I’d been careful, too, moving slowly, stepping high, knocking branches away with the end of my stick. But it didn’t matter, the thorns were everywhere. Little nettles were, too, their tiny sharp ends wedging into my socks and shoes and jabbing against my ankles.

“Never again,” I muttered to myself as the path finally joined the road and I walked on towards the mountain top.

But then the longer I walked, the higher I climbed up towards the ridge of the mountain, the dryer the air felt, the stronger the wind- the annoyance and pain of the first part of the hike vanished. All I was left with was that incredible feeling of freedom and space, the kind of strength you feel when you’ve made it to the top of something. 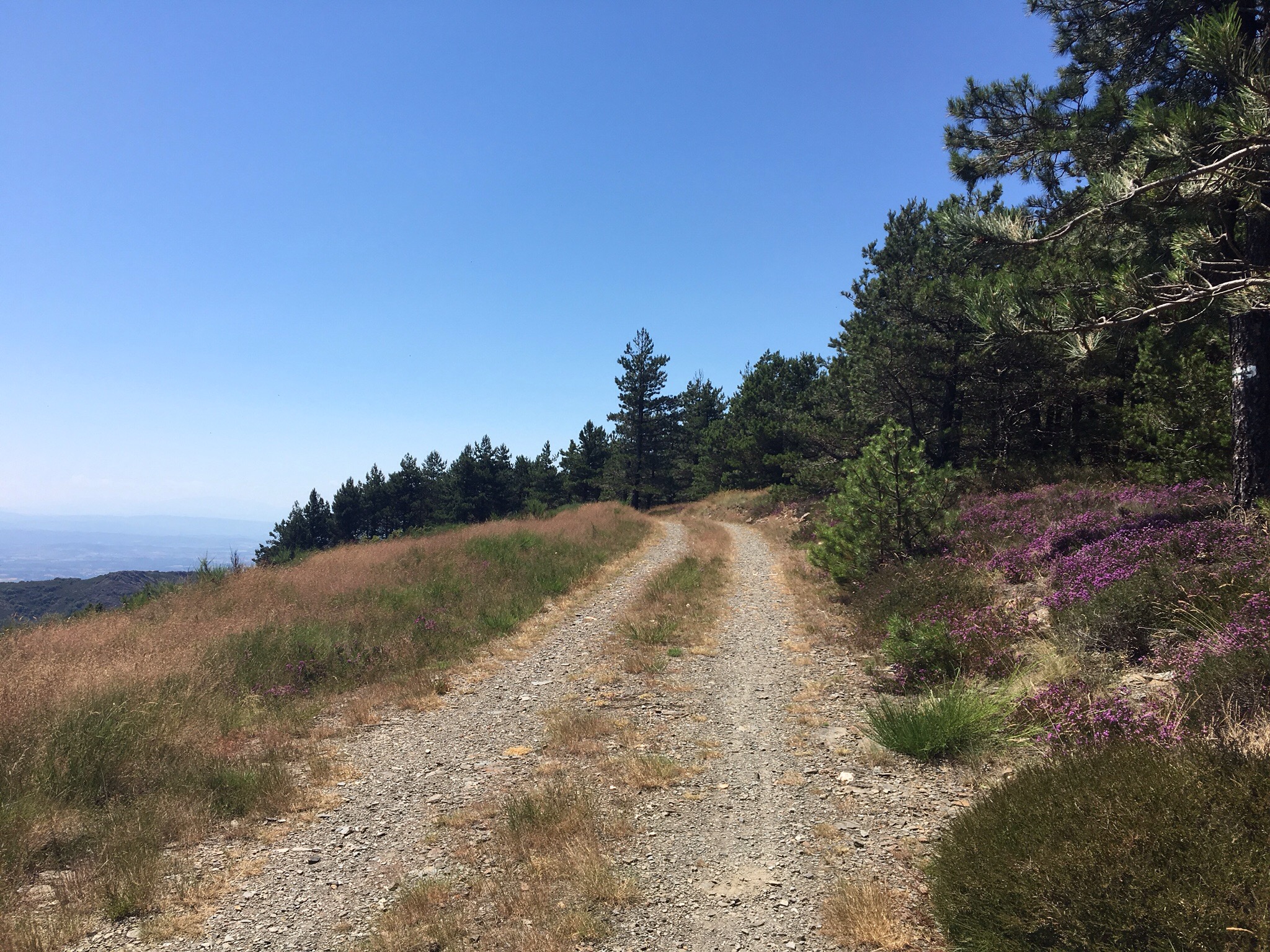 I love being back here. I ended my hike hot and sweaty and had to pluck a tiny needle of a thorn from the heel of my foot- but I love it. I’m trying hard to spend time inside, at my desk, but I also can’t resist what is sitting outside my window. Already a week of the retreat is gone- a week!- but I still have two more. And I have a feeling that there are several more adventures waiting for me.