It’s only been in the last few days that I’ve felt close to Santiago, and aware of what that means to me. I’ve been walking towards Santiago for 28 days, but I couldn’t really put it all together in my head until yesterday. Until now, it’s all just been walking: day after day. I knew that the kilometers were adding up, but I wasn’t paying close attention to how much I walked or where I was on a map. I was just walking, and taking in the experience.

The first thing that struck me was something three nuns said, on a little hill on the outskirts of Ponferrada a few days ago. Saskia and I had been walking by when we saw them picking fruit from a tree. Saskia, who can speak Spanish, asked what the fruit was. The answer was plums, and instantly the women reached down to us, offering handfuls of the round fruit. They filled our hands, offering more and more. The plums were spilling out of my grasp and rolling down the hill, but they kept reaching down to give us more. Two guys were approaching (who, it turns out, had just started their Camino that day and were about 20 minutes into their walk). I shoved handfuls of plums at them, and the nuns continued to give us more, speaking in Spanish the whole time. We finally left, our hands and pockets overflowing, and I asked Saskia what they were saying.

“They were saying- ‘pray for us in Santiago.'”

It gives me chills now as I write this, the idea that these three holy women recognized the importance of what we were doing, and saw a great meaning in our walking and in our destination.

I’ve tried to be aware that I’m on a holy pilgrimage, but it wasn’t the reason that I chose to walk the Camino, and it’s been overshadowed by so much here. I try to stop in churches when I can, and have attended a few masses and received several Pilgrim Blessings. But most of the people I talk with aren’t here for the religious part of the pilgrimage. And it’s easy to forget about the history of the path we’re walking on, and the reason that this Camino exists at all.

But when I heard that the nuns asked us to pray for them in Santiago, something shifted a bit in my head. I knew that I would say a prayer for them when I reached Santiago, and all at once, the larger scope of what I was doing came into focus.

I’m almost in Santiago. And I’ve walked a long way. This is day 28, which means I’ve been walking for 4 weeks. The beginning of this Camino- that first day through the Pyrenees- feels like a lifetime ago, and it feels like yesterday. I don’t want this to end, but I’m also so excited to reach Santiago.

And I’m a little surprised by my excitement. For weeks now, Adam has been talking about the sense of accomplishment we’ll have once we reach Santiago- to be able to say that we walked this distance. And every time I heard him or someone else say something like that, I couldn’t really agree. I’ve loved the walking so much, and some days have been hard, but it’s also been one of the easiest and natural things I’ve ever done, in a way.

But now that Santiago is close, man, I’m excited. And I feel proud. Lots of new pilgrims have started in the last few days (including large, large groups of students, and everyone tries to figure out where they’re stopping so we can avoid those towns), and the Camino is crowded. I was expecting this, and am trying my hardest to have an open mind when I can’t walk alone. When these newer pilgrims ask where I started, I feel really proud when I answer, ‘St Jean’, and I wasn’t expecting that. But I do feel proud: I’ve been walking for a long time, and now, finally, I’m starting to feel the accumulation of all of my steps.

My legs are strong. They’re really strong. I’ve always been a fast walker, but here? It’s a rare thing when people pass me. Several people have joked that I’m impossible to catch. On hilly and rocky sections of the Camino, I can nearly keep the same pace as bikers. I was walking quickly in the beginning and I’ve continued to, but now I just feel so solid. This isn’t to say that I haven’t had my hard days here, physically, but even my hardest day hasn’t been that bad. I’m proud of myself for being able to physically handle this walk, and proud that I can safely say that I could do this for another month.

I’m proud that I’ve handled the potentially uncomfortable parts of this as well as I have. I worried that I would have trouble with feeling displaced, and constantly on the move, and that I would tire of the same routine day after day. But if anything, every day feels so new and exciting and full of possibility. I have no idea what I’ll see or who I’ll meet. I have a fairly good idea of what I’ll eat but since I’ve mostly been loving what I’m eating, that’s not so bad (bread, coffee, cheese, wine, fries, tuna. Mmm). Last night I feel asleep in an albergue with about 100 beds in a wide open space. The lights were still on at 10:30 and people were moving around and talking and, somehow, I fell asleep. I’ve adapted to the strange conditions of this trip: the offbeat places where I’ve had to stay, nearly always sleeping on the top bunk, cramped and sometimes dirty showers. After the first week I gave in and bought shampoo and having been using it every since, but as for the rest of it? I think I’ve shaved my legs once, I’m definitely not wearing makeup, I wear the same two outfits every day. And I feel great.

I’ve had great practice in letting go of planning, I’ve spoken up for what I need when I need it, I feel more comfortable socially than I have in a long time. I’ve loved the people that I’ve met, and it feels good to know that I’m loved in return.

I’m not done with this walk yet but I’m certainly processing the ending. I had such a good walk yesterday: I walked alone for nearly the entire day, not seeing many pilgrims. The sun was shining and I was walking through a beautiful part of Galicia. I felt so good and at peace. I listened to music and at some points was dancing down the trail.

Last night I stayed in Portomarin where lots and lots of people stopped for the day. I ran into so many that I knew: all of the Koreans, the Spanish man and his two kids, the Italian mother and daughter, the Vermont family. Almost everyone is going to arrive in Santiago on the same day, the 27th, and that makes me so happy. There was a long time when I thought I would fully break away and stretch out my trip and walk short days or take days off. But about 10 days ago I realized that I wanted to celebrate in Santiago with all of the people I’ve met along the way.

And I think most of us feel this way. “When are you arriving in Santiago?” we ask. “The 27th, and you?” “Me too! We’ll take a photo in front of the cathedral!” “We’ll celebrate with sangria!”

Two days ago Ibai showed me a photo on his phone. ‘Can you see who this is?’ he asked. There was a man standing in front of the cathedral in Santiago, his walking poles raised in the air in triumph. I squinted at the photo. ‘That’s not Adrien, is it?’ Ibai nodded in excitement. ‘It is, he made it to Santiago!’ All I could do was grin. Adrien had started from St Jean on the same day that we did, but after two weeks started walking really long days to reach Santiago by his deadline. I hadn’t seen him since Hontanas. 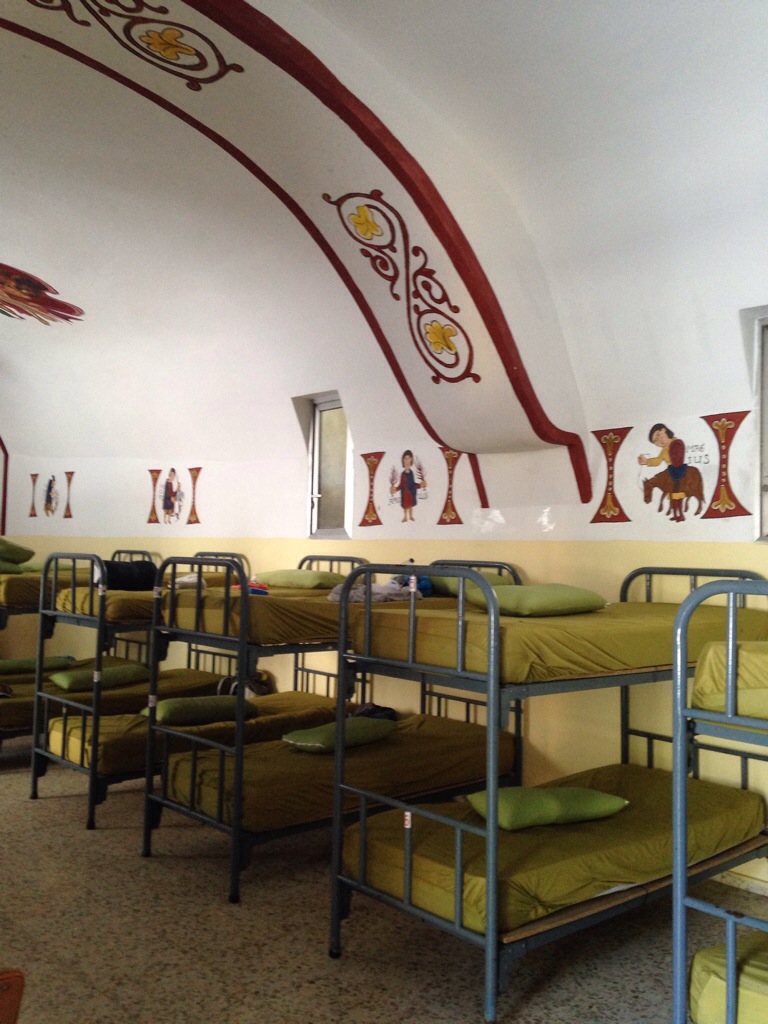 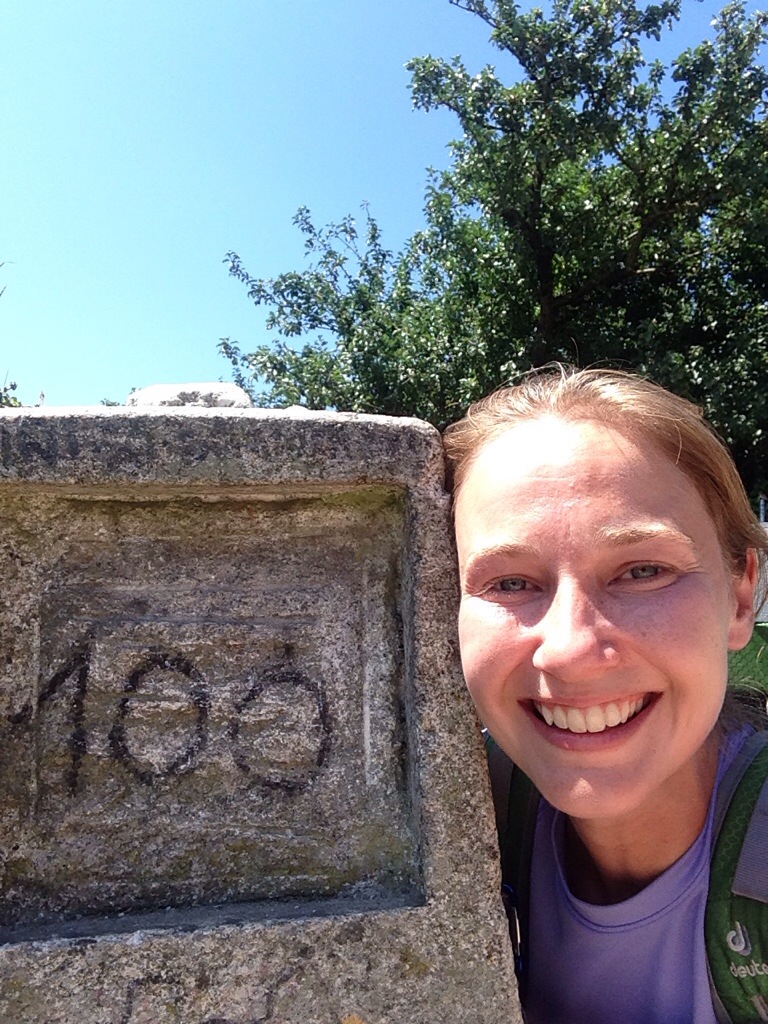 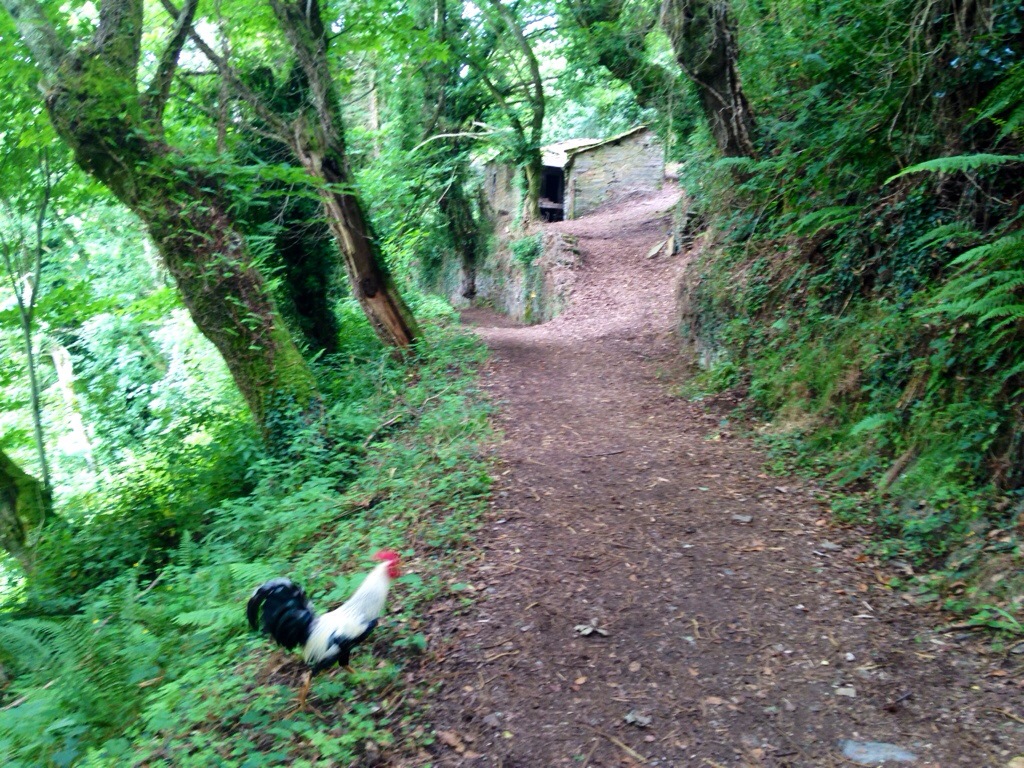