When I was planning for my Camino I couldn’t get enough of reading other people’s packing lists (in fact, I still love looking at packing lists!). But in those pre-Camino days, reading about what other people had brought along on their pilgrimage had a purpose: it helped me figure out my own list.

I was pretty clueless about a lot when I began preparing for the Camino. I think the only things I brought along on my Camino that I already owned were a spork, a Nalgene water bottle, and a case for the camera I borrowed. I needed to buy everything else.

I’ve been wanting to put together a list of the things I packed for my Camino, and I’ve finally gotten around to it. Maybe it’s been on my mind because I’m currently making a packing list for my next trip (much smaller but coming up after Christmas, stay tuned!). But as I think back to those days last spring as I made list after list of all the things I needed for my Camino, I remember how overwhelmed I felt. I couldn’t just run out and buy things, I felt like I needed to research every item. And maybe I didn’t need to read as much as I did about high-tech, quick-drying underwear (which, in the end, I never bought), but I did need to learn a thing or two about the kind of gear I needed for this walk. And finding packing lists from other pilgrims helped me a great deal.

Now I Know Better: The Things I Would Bring on my Next Camino

This definitely makes the top of the list. I packed for Spain intending to keep the weight I carried as low as possible, so that meant taking along a bar of soap for washing my clothes, my body, and my hair. An all-in-one. But after a few days of using the soap, my scalp felt so unclean and uncomfortable, and I couldn’t stop talking about how much I wished I had brought a small bottle of shampoo. A charming New Zealand boy overheard me and five minutes later delivered some shampoo to my albergue bed. After that I found a tiny bottle in a supermercado, and later, in Leon, received some (along with conditioner!) in a care package from my best friend. For my next Camino, I will definitely bring shampoo. 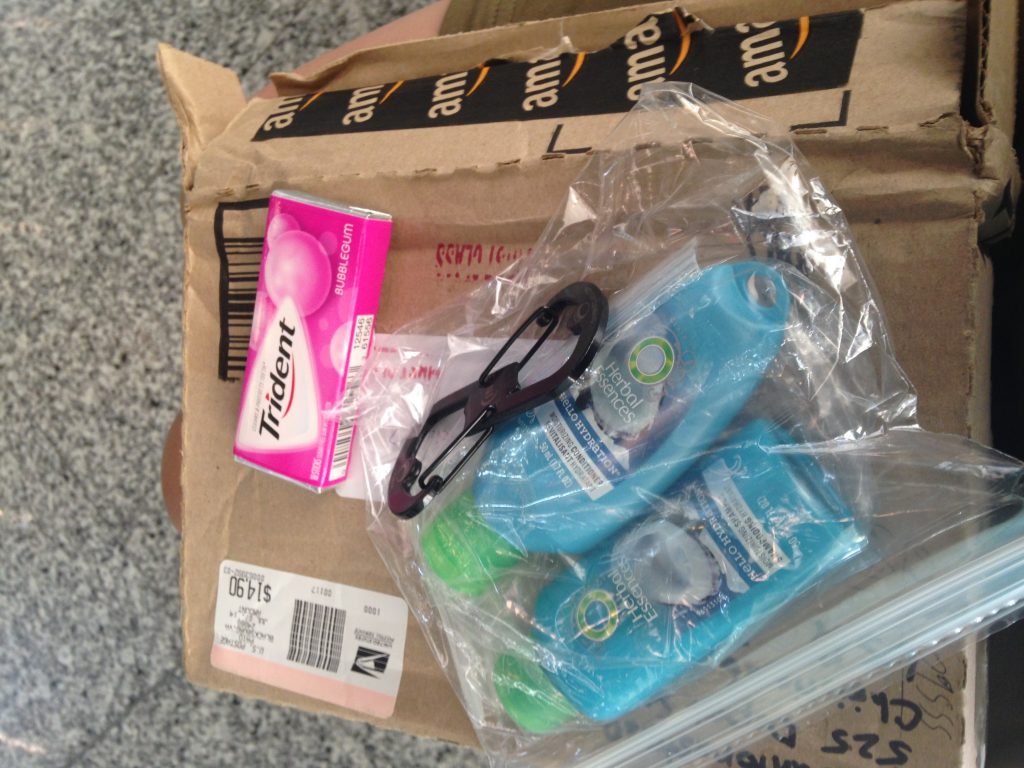 #2. Something to wear (other than hiking clothes) in the evening and to bed.

In the end, I picked up a cotton t-shirt and a light-weight pair of ‘lounge’ pants as I walked the Camino: the t-shirt in Burgos, because I wanted a comfortable shirt to sleep in, and the pants because I left a pair of shorts in Hontonas. Again, because I’d wanted to keep my packing light, I brought two walking outfits with me (sleep in one at night and wear it the following day, then wash it and put on the other). But it was uncomfortable to sleep in my walking clothes and I wish I had brought a non-walking outfit to wear. Right now the lounge pants I bought are hiding in the back of a drawer, but for my next Camino, I will dig them out. 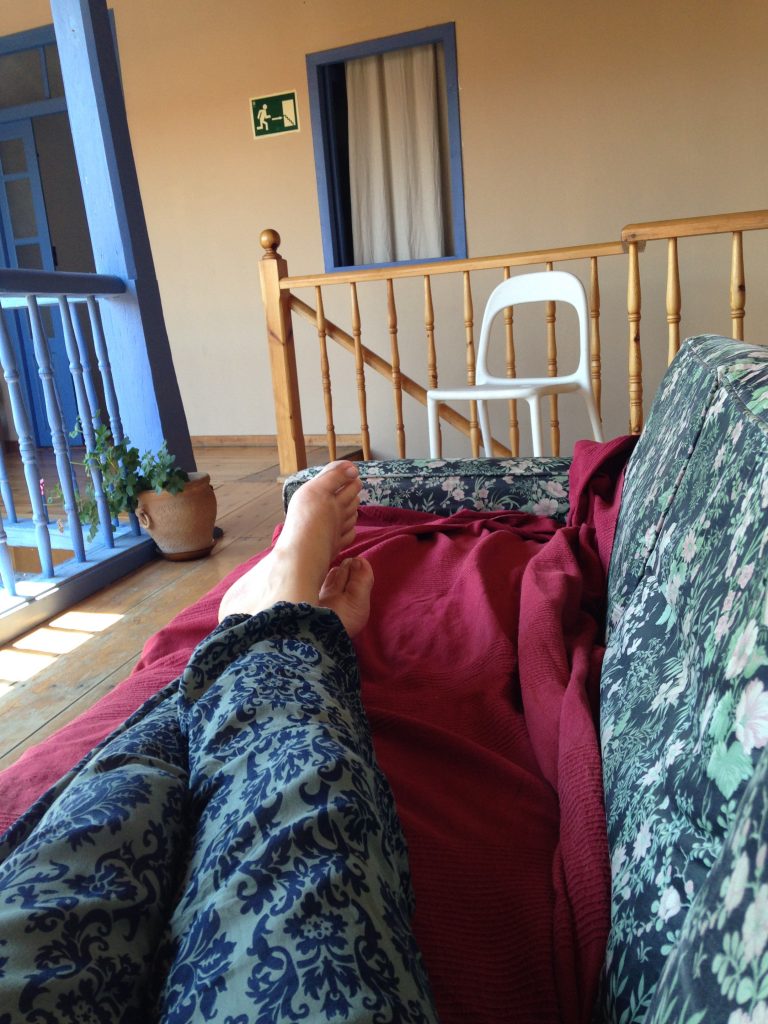 My pants match the couch!

I brought along 6 diaper pins, to hang my laundry after washing. They were more useful for hanging still wet clothing off of my pack as I walked, and since I lost a couple along the way, several more would have been useful. I tried to use them to hang my clothing from laundry lines at the albergues, but the clothes would usually slide and bunch up if the line wasn’t straight. Some clothespins would have been nice. Next time.

I have no regrets about using my iPhone for the majority of the photos I took on the Camino (I also had a small digital camera which I used occasionally). But every time I saw another pilgrim with a larger DSLR camera, I felt a pang of jealousy. Yes, a bigger camera would mean extra weight, and it was smart to keep the weight in my pack down. But for my next Camino, I might just pack a big camera.

I’m sure there were a few other, small things I wished I’d had as I walked, but these are the only things that stand out. I didn’t need much for the walk, and I was happy with most of the things I had. That being said…

Now I Know Better: Things I Wish I’d Left Behind

This one makes me smile. When I boarded my flight from Iceland to Paris (after being delayed in Iceland for nearly 24-hours), I walked behind Luke, who I’d befriended during the delay. We’d talked all about our upcoming travels: me and the Camino, him and his trip around the world. As we sat in the airport lounge, he said to me, “You know what I don’t have? A pillow. I might wish that I had one.” “Yeah,” I replied. “I don’t have one either.”

I’d heard that some albergues along the Camino didn’t provide pillows, and I was a little unsure of how comfortable it would be to sleep without one. I figured I could just roll up my fleece and sleep on that if I needed to.

So as Luke and I boarded the plane and walked to our seats, I saw him dart his eyes around the cabin and then quickly reach up into an overhead compartment. He turned around to hand me something, and it was a small pillow. He had one for himself, too.

I carried that little pillow with me the entire way across Spain. Each evening I unpacked it from my bag but I never used it: every single albergue had a pillow on the bed. But each morning I repacked it. For some reason, long after I realized that I wouldn’t need it, I just couldn’t get rid of the Icelandair pillow.

Still, for my next Camino, I would know not to bring my own pillow. 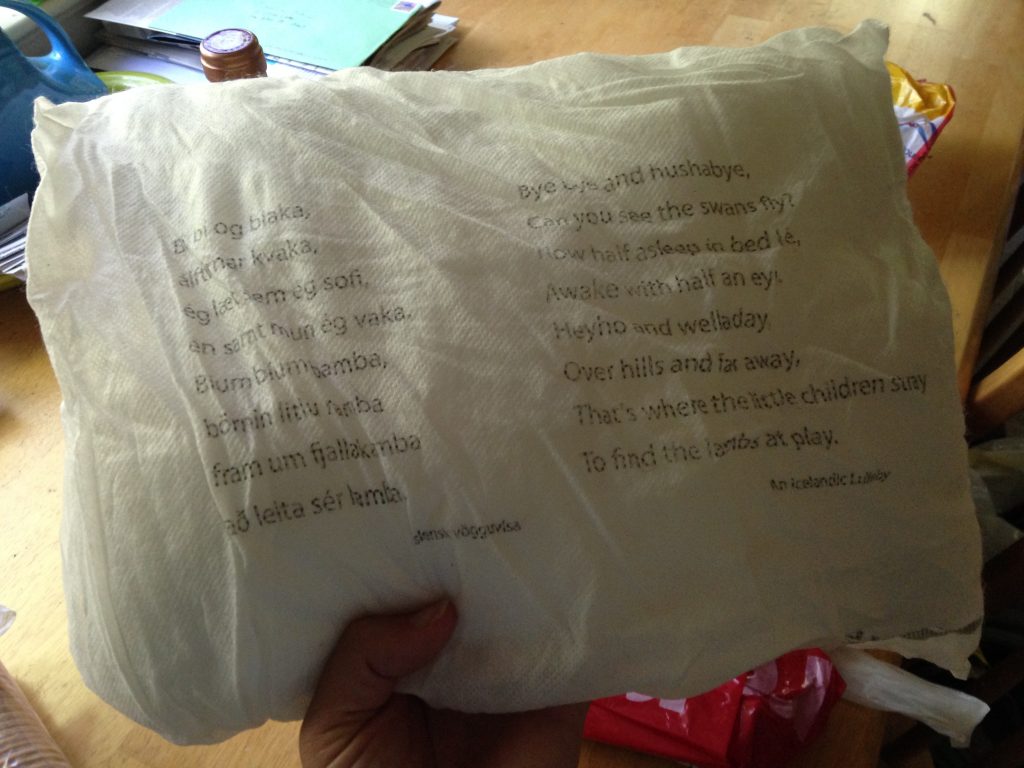 This was a last minute item thrown into my pack. I worried that I wouldn’t have enough clothing to wear, that I would be too hot while walking on summer afternoons. I only wore the tank top a few times, and never to walk (a few times to sleep in, once when I was washing the rest of my clothes in a machine). Next time I’d skip the tank top and just bring a comfortable t-shirt.

Some of my friends teased me for bringing a buff on my walk. They accused me of wanting to pretend that I was on Survivor. But I had read all about their usefulness, so I bought one. I used it a few times, to keep the sun off the back of my neck on the hottest days. And maybe it was because I walked during a mild summer, but I just didn’t feel the need to use it that much. Next time, it might stay at home.

And one final bonus item, something I almost brought along, and am glad that I didn’t:

I wrote all about it here. I think it would have been a sight to see when I arrived in Santiago, because the fleece I did bring, a black one, was worn nearly every single day. I almost always started in my fleece in the mornings, and almost always ended my day in it as well. That fleece was often crammed into my bag, dropped on the ground, covered in crumbs. I can’t imagine what a white one would have looked like after 500 miles. Black was the way to go.