Yesterday, I was thinking about how long it had been since I’d seen a cloud in the sky. It feels a bit as though my entire time here has been under a perfect blue sky, and that is nearly true. But then I remember the last thing I posted here, how the weather was chilly, and I remember that yes, there were clouds. There was wind, there was a cool stretch.

It feels so long ago, that first week when I was settling back into life in a small French village in the mountains, remembering how things are done, relearning how to do them, discovering that some things aren’t the same at all. I finally felt settled, another week passed, and now here we are, almost at the end.

I even thought about canceling my Camino, and just staying here. But it’s impossible- the rooms are all booked, which is great news for La Muse and probably the right kind of news for me, too. As much as I want to stay here and never leave, I also want to settle into the next thing… which happens to be Spain and tapas and lots of walking.

I still have four solid days here, and in addition to my regular brainstorming sessions at Le Roc, the long hikes, the chats with the other residents, we also have an “excursion” down to the ruins of a Cathar Castle (we’re tacking on a lunch in a Michelin starred restaurant, too!), and a concert and all-village fête on Saturday night. Tomorrow Vera leaves, so tonight we’re all meeting on the terrace for a goodbye drink. Last night we had a reading, two nights before we had more goodbye drinks for Kelly.

There’s a really good group of residents here, though I have a feeling I might say that about nearly any group that spends time at La Muse; everyone here is creative, and serious about their creativity. But then you have a great and unpredictable mix of the rest of our personalities: introverts and extroverts, loud and quiet, soft and hard, vibrant and calm. On a few nights I’ve stayed up until the bitter end, talking and singing and laughing with those who remain on the terrace, long past the time when the stars have appeared in the sky. Usually I’m in the “second wave”, not leaving first, not staying until the end. But some nights I slip out as soon as my dinner is finished, the last sips of wine drunk. I sneak cookies upstairs- we’re not supposed to have food in the rooms- and I read a book or write in my journal or work on my story.

The work I’ve gotten done here has been difficult to measure. The bulk of my book is written, I think, but it is so very rough, and I’m still struggling to decide what, exactly, I’m trying to stay. So there is still an awful lot left to be done, but I’m feeing good about it. I’ve had the space here to really delve into the heart of this story, and to my surprise, I discovered that I might not want to really share too much about certain parts, and that I have a whole lot to say about others. And just like last time, the most important work seems to have happened away from my desk, away from the computer. I take the 10 minute path up to the top of the mountain and sit on my large, flat rock and stare off into the valley- the Pyrenees lining the horizon- and after an hour sometimes I just know in my gut what I need to do, what I need to write.

I went on an epic hike today; I wanted to get one full, long day of walking in, a sort of “Camino” training day (because in less than a week, I’ll be on a Camino! Hard to imagine right now….). Lets just say that maybe it was a bit too much. I headed for Latourette, which is just another village tucked away in these mountains, though it is not close. Last time I was here I’d seen signs for it, trails that led there, but it always seemed impossibly far away. But now that I have hiking experience, Camino experience, it seemed doable. The first half was great- up and down and through these mountains, stumbing on tiny villages that weren’t much more than a few houses and a really old church along with some crumbling stone ruins.

I made it to Latourette and sat on a bench and ate some snacks and rested my feet. Then I continued on, following a path that I assumed would sort of take me in a big circle and back to Labastide, but the further I walked, the more I realized that it might not have been so smart to follow an unknown trail. I wasn’t entirely sure where I was going, and even though I was always on a marked trail, I had a bad feeling that it was taking me away from where I wanted to go. 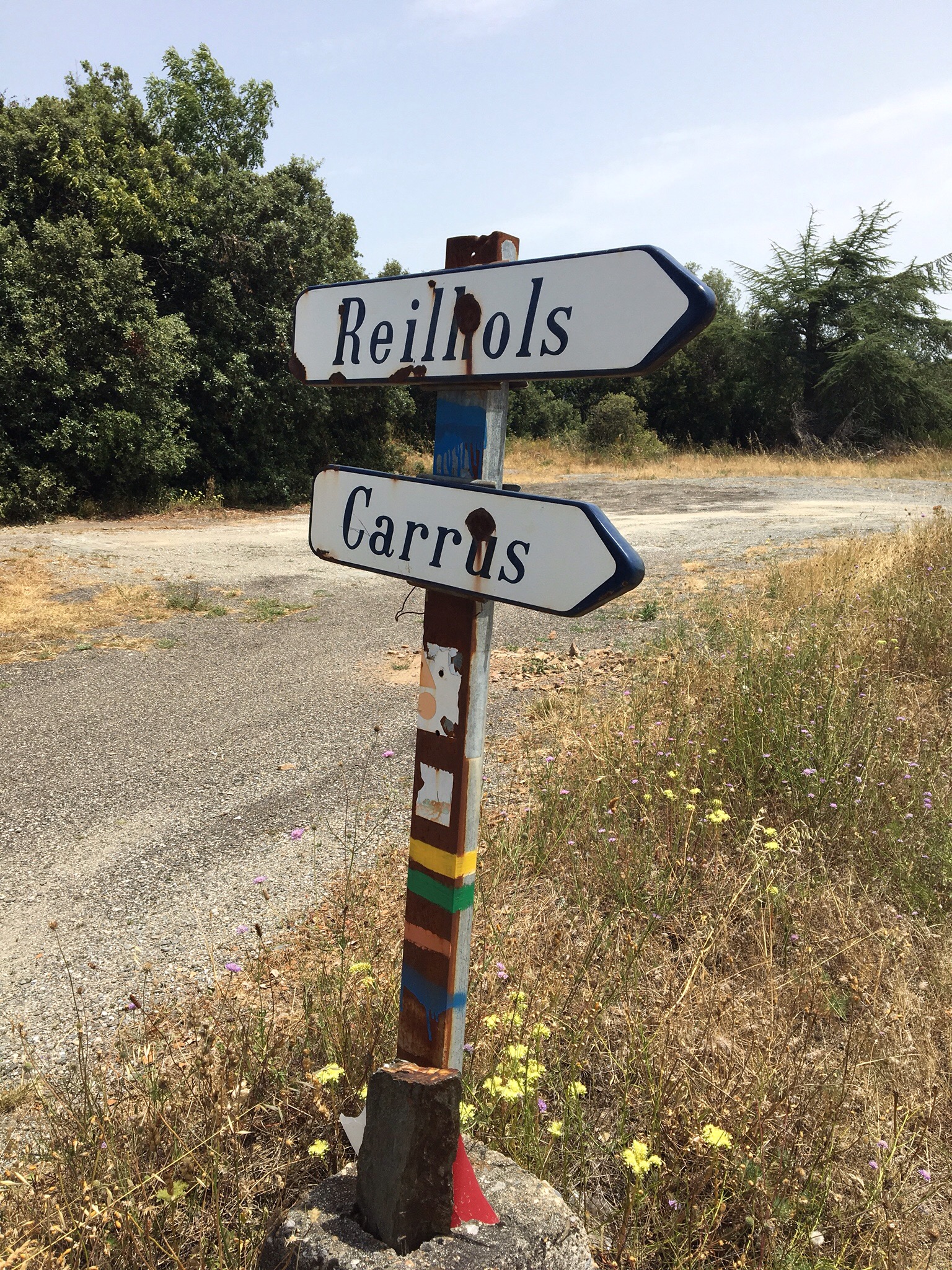 I kept walking though, hoping that the trees would open up and I could take a look at the landscape and get my bearings. The sun was hot, the air was humid, it was getting later, I was feeling more and more unsettled. Finally I turned around, walked back to Latourette, and followed a road that I knew would lead me to a village that was not far from Labastide.

I stumbled back into the village, my legs feeling like jelly, just as dark clouds gathered in the sky and a little rain began to spit down. It’s still overcast now, the first not-blue sky I’ve seen in what feels like weeks and weeks. The kind of sky that makes it easier to sit inside and get some writing done.

Already I can feel myself begin to move away from this experience, my thoughts starting to turn towards Spain, and the Camino. But I’m still here for a few more days and I want to really sink into these last moments: write what I can, wander through the village, sit up at Le Roc, hang out with Homer the dog. And I tell myself the same thing that I did three years ago, as I was preparing to leave: you can always come back. 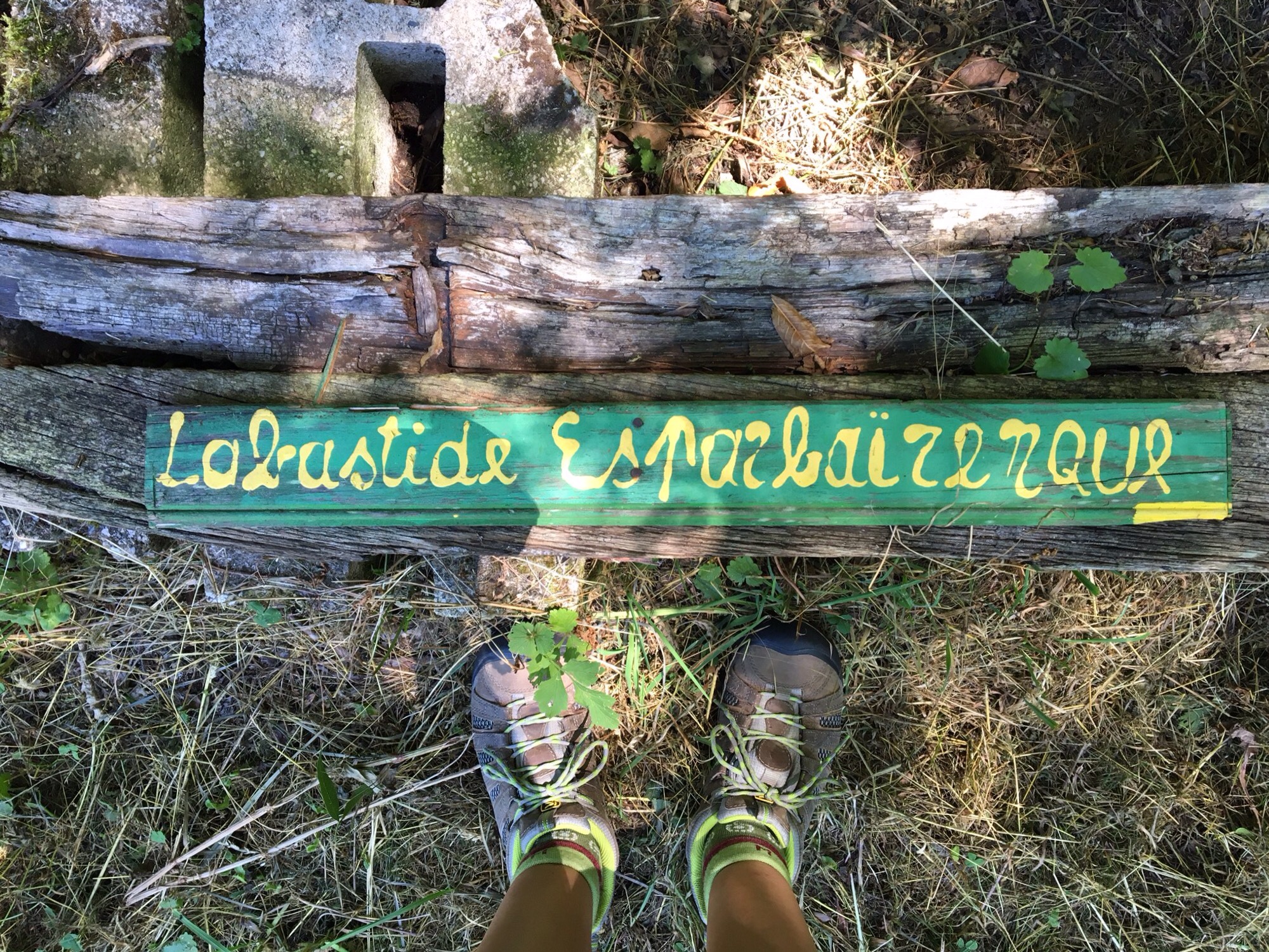