Day 9 on the Pennine Way started with another full English breakfast in the dining room of the Tan Hill Inn. Actually, it started with something better.

Have I mentioned my little trick when it comes to breakfasting on the Pennine Way? When I stayed in a bunkhouse or B&B that served breakfast, I’d make a note of the starting time and always arrived at least 5 minutes early. Often I was the first one there, and the tables were set and the cooks were in the kitchen. Within moments I’d have a hot cup of coffee and my breakfast ordered placed, the food being cooked up quickly. I could have a good but fast breakfast and be out the door before others had even tucked into their eggs.

But on this morning, in Tan Hill, I experienced a little coffee magic. The owner or manager of the Inn, who I’d seen milling around the night before, came over to my table.

Now I’m not sure if I got the cappuccino offer was because I was early, or because he offers cappuccinos to everyone (I didn’t hear him offer one to anyone else, but I could have been mistaken), or who knows, maybe he was being extra friendly and trying to flirt by offering me good coffee (and if so, he was on the right track).

In any case, you better believe I ordered the cappuccino and the coffee was strong and milky and GOOD. I think I said this in my last post but I’ll repeat it one more time here- if you’re planning a walk on the Pennine Way and are interested in staying in the Tan Hill Inn (Britain’s highest pub and all-around cool and isolated place), consider booking a bed in one of the bunk rooms. I lucked out and had the room to myself, but even if you have to share it’s a good deal. The beds are basic but comfortable, you get a towel (a towel!) and use of a bathroom with a shower and a tub. Breakfast is included in the price and if you’re lucky and smile at the cute owner, you might just get yourself a cappuccino too.

But back to business, I had walking to do. I finished breakfast, laced up my shoes, and headed back out into the wide open countryside.

As usual, it was another blue sky day with full sunshine. The walk out of Tan Hill through Sleightholme Moor can be boggy (and probably IS boggy 99% of the time), but aside from a couple slightly wet sections, the walking was dry and not too difficult. In foggy conditions I imagine it would be really difficult to follow the path; even on a clear day, it was hard to keep track of the faint trace of a path through the tall grass. My guidebook recommended keeping an eye out for the white posts that dotted the landscape, and this is how I followed the path out of Tan Hill: scanning the open field for a marker somewhere far in the distance and when I found it, I’d head there, then start scanning for another.

The walking went on and on, and I remember it being mostly pleasant and not too strenuous. After a few hours I reached a milestone: I was halfway through the Pennine Way! Just a little past the halfway point I stopped by a small hut; there aren’t a lot of these on the route, but when the weather is bad I can imagine that being able to stop and rest and get out of the rain would be most welcome. I only stayed for a few minutes, taking time to read some of the notes left on the walls. The one pictured below caught my eye; what an incredible way to honor a 50th birthday! And those words- “Enjoy the freedom”- echoed in my head as I continued to walk and walk down the trail. The freedom to walk under trees and through meadows and along the reservoirs, the freedom to kick off my shoes or drink deeply from my bottle of water, the freedom to walk as fast or as slow as I wanted or needed. 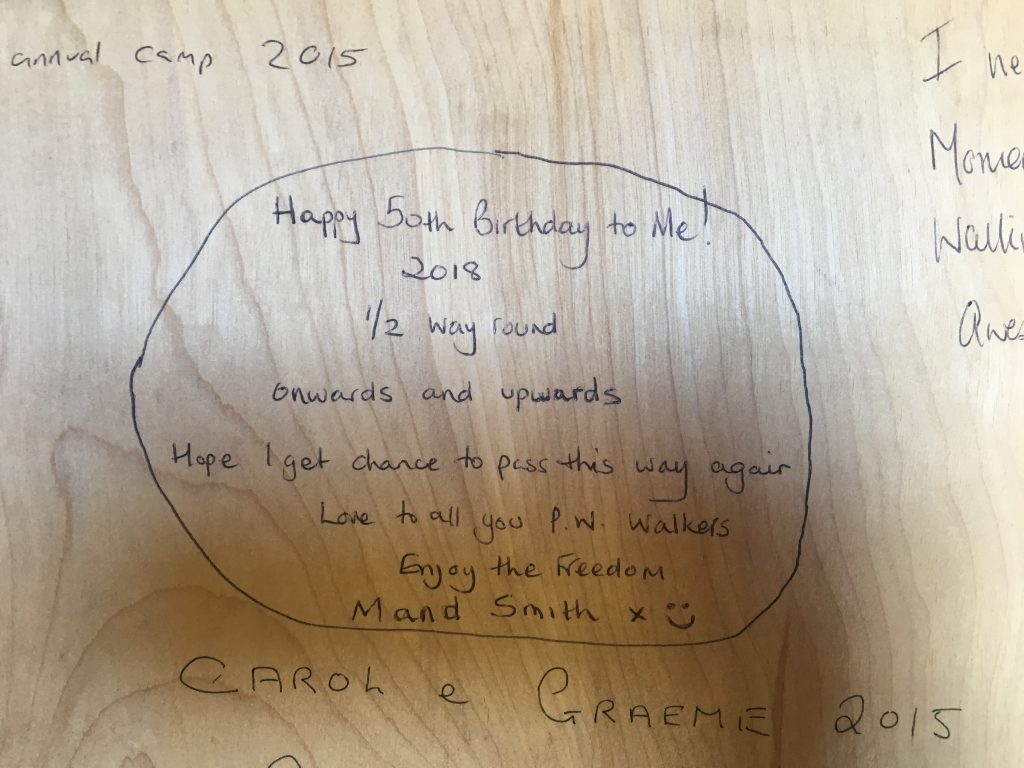 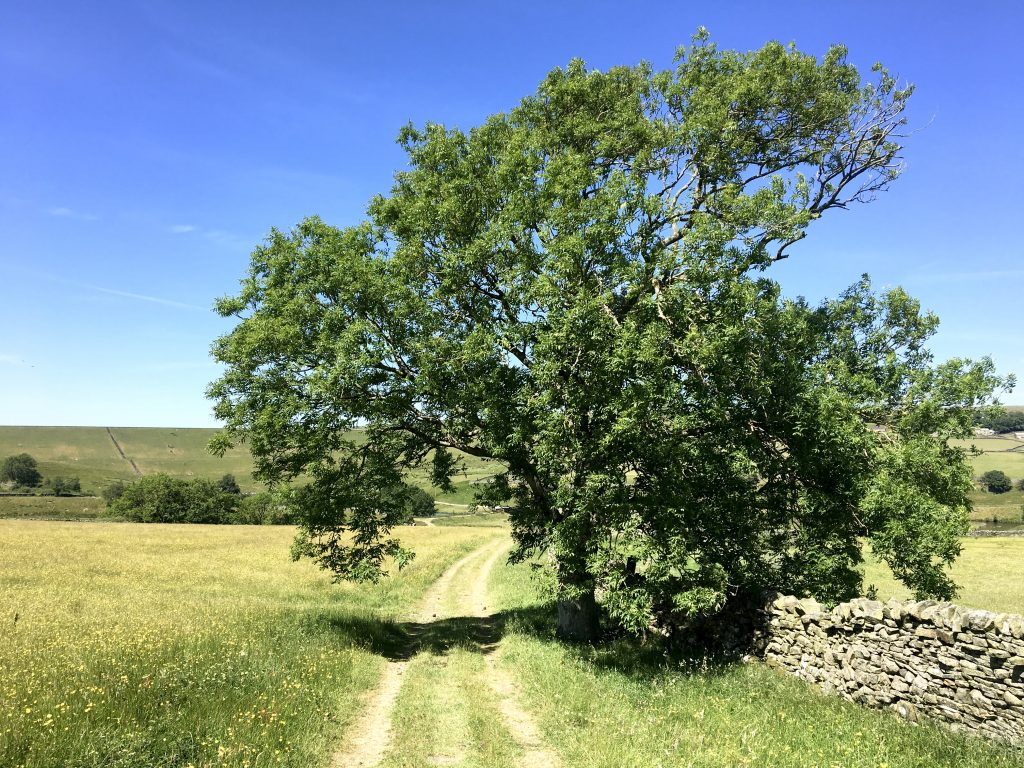 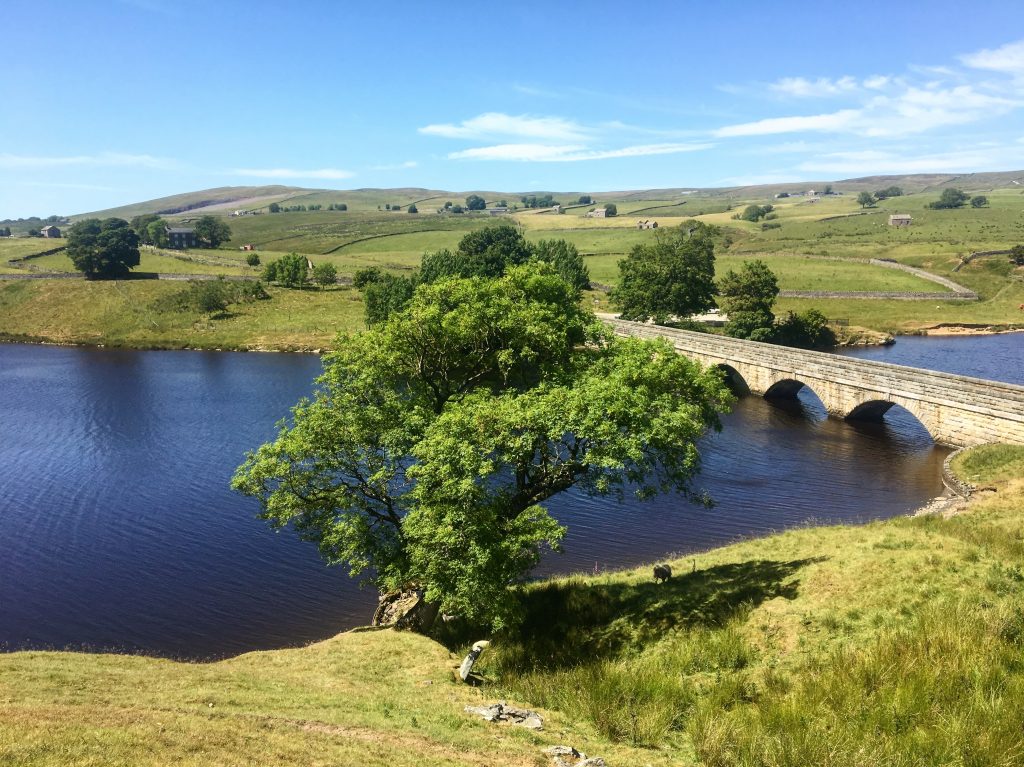 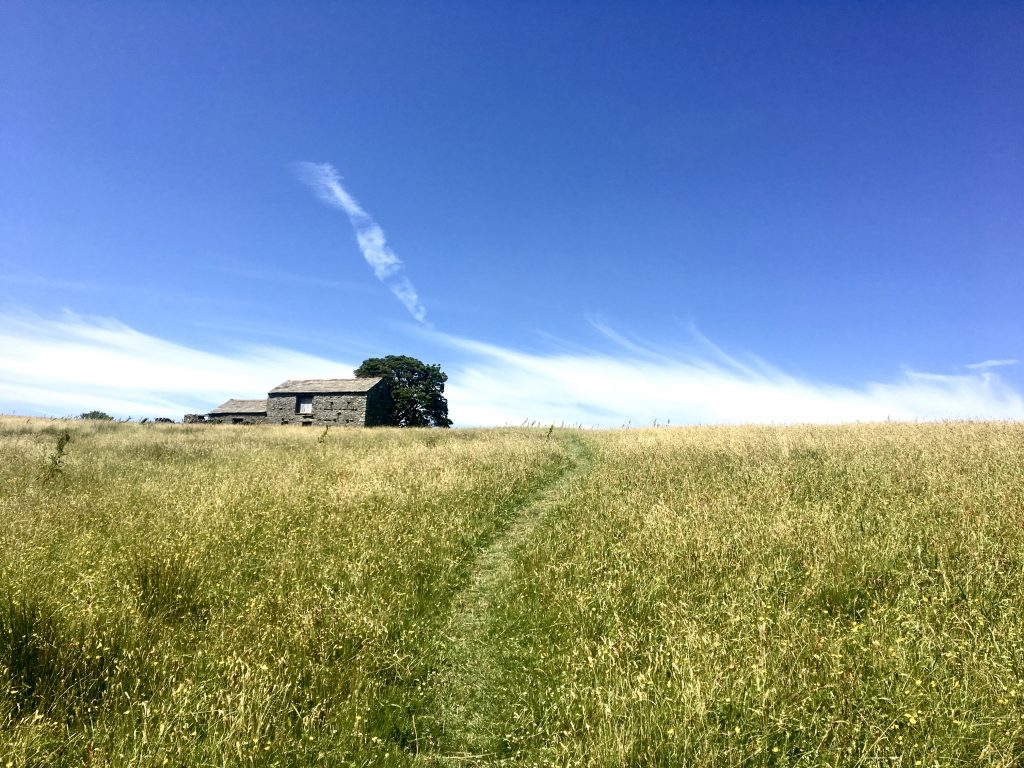 7 more miles to go, and on tired but content legs I walked into the very charming village of Middleton-in-Teesdale. I wouldn’t be staying here; my reservation was in a bunkhouse another 3-miles down the path, but I stopped in the village to look around and buy some snacks for the next day.

I was feeling happy. It had been an all-around good day on the Pennine Way. The sun was shining and I was smiling and even though I was tired, I felt good as I walked away from the village and onwards to my bunkhouse. 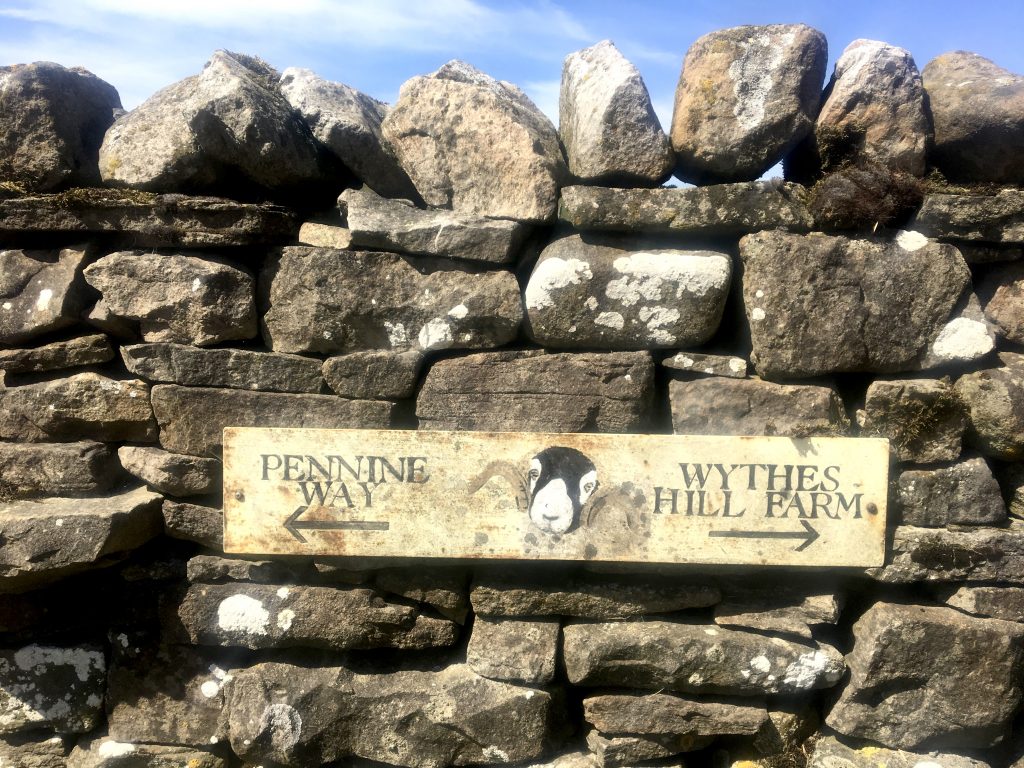 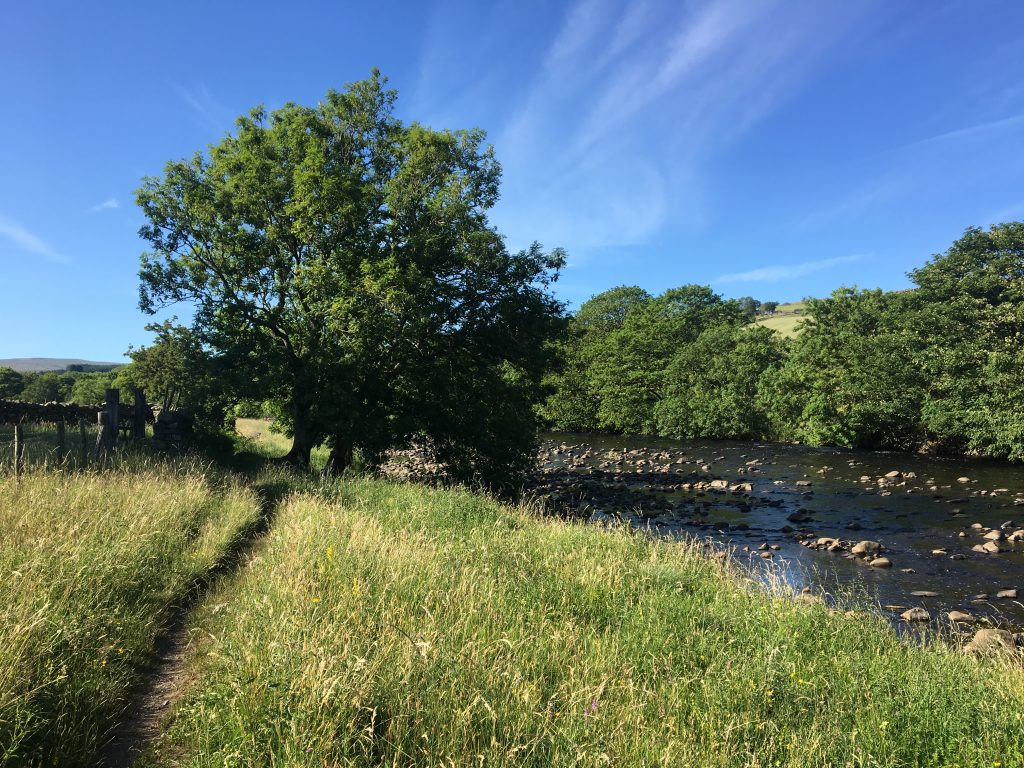 Everything was going fine as I continued to congratulate myself on a walk well done when, all at once, things took a turn.

My reservation was for Low Way Farm Camping Barn, and my guidebook’s very basic, hand-drawn map showed the location of the barn to be in the middle of a field. There was a faint, dotted line on the map, veering off from the Pennine Way and straight towards the camping barn and so I assumed I would be looking for some sort of path. I walked up, I walked down, I walked back and I walked forth, over the same stiles and stone steps and through the same gates several times. I could see a few buildings in the field, so I headed towards one, making my own path through the tall and rough grass.

I arrived at the first stone building, circled around it a few times, peered in windows and shook on the locked doors. There was no one around and there didn’t seem to be much going on in the building, either, but I thought that perhaps this could be my camping barn. I wasn’t sure. I scratched my head, considered the expanse of green field, and continued walking. Back to the the path of the Pennine Way, up and down and back and forth, through the fields again to try another building, with no luck. 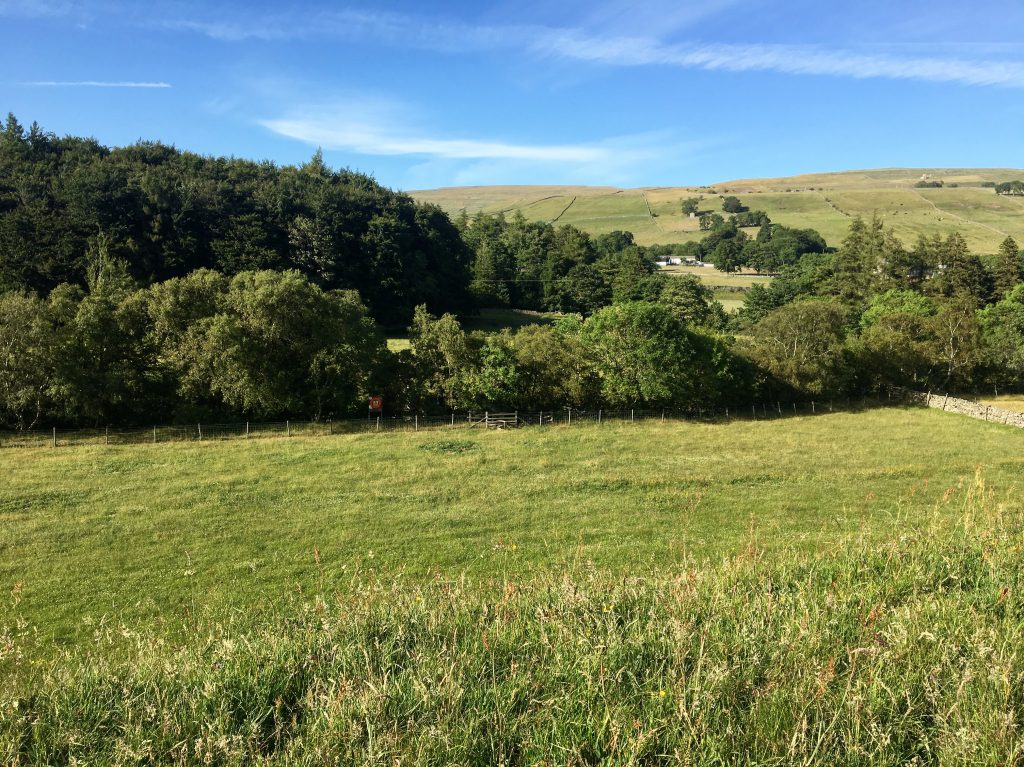 So then I set off further into the fields, attempting to reach a road that was running parallel to the Pennine Way. I went up and over hills, to climb over fences I had to navigate around barbed wire, I wasn’t entirely sure where I was going but I could hear an occasional car drive by so I knew I was close to the road.

And once I arrived at the road, I easily found the pub where I planned to have dinner later that night. It’s not that I’d been lost at any point, it’s just that I couldn’t for the life of me figure out where my camping barn was! I headed towards the pub to ask for help but before I could get inside, a white van pulled up beside me, the window rolling down.

“Excuse me,” a woman’s voice called out. “You’re not Nadine, are you?”

This was the owner of the camping barn, and she’d come to find me. I suspect that a farmer must have seen me wandering cluelessly around the fields and sent out the SOS on my behalf. Who knows. I was just grateful to have a key in my hand and easy directions to my accommodations. I followed a gravel path and arrived at one of the stone buildings I’d been convinced couldn’t have been the camping barn. From outside the building I could look across the field and see exactly where I’d been traipsing up and down, hopelessly confused. I think my wanderings cost me nearly 2 additional hours of walking- you should have seen the things that came out of my shoes! The owner of the barn had warned me that the pub might stop serving food around 7:30, so I showered as fast as I could and then raced back out again: up the gravel path, over the hill, down the road where I arrived, breathlessly, at the pub. 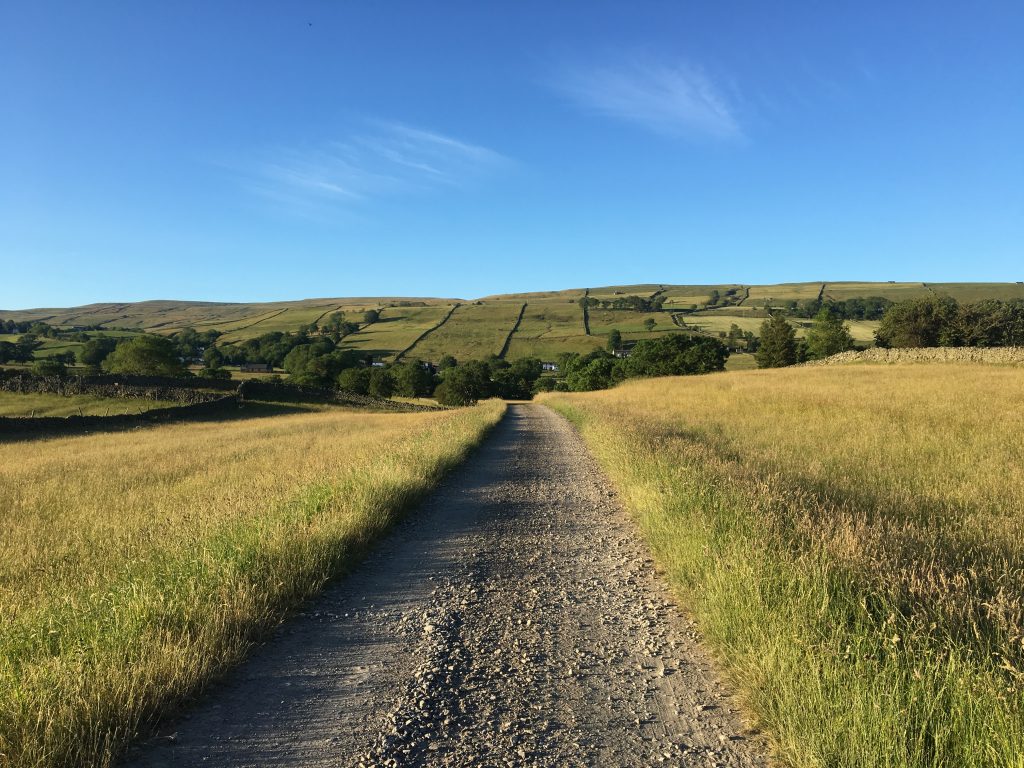 I checked the time on my phone. 7:18pm. “Perfect,” I breathed to myself. I went inside, up to the bar, and was promptly informed that the kitchen had stopped serving food.

I’m not sure what I said, though I probably asked if they were sure that no food was being served. I didn’t want to beg but I certainly pleaded, explaining that I was walking the Pennine Way and that it had been a very long day. The woman behind the bar didn’t seem to care, she just shrugged and said I could order a beer.

I sat at a table, watched as another couple were served heaping plates of hot and delicious-looking food, drank my beer quickly and then headed back out: down the road, onto the gravel path, over the little hill, past the sheep in the field, into my camping barn. 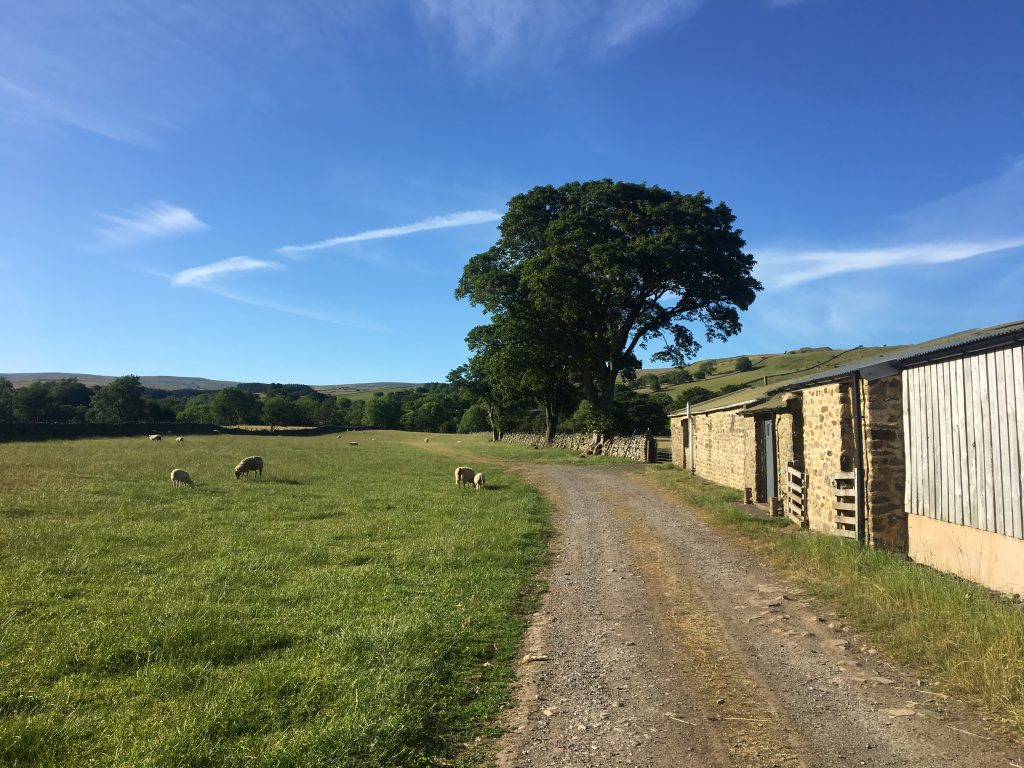 How many miles did I end up walking that day? A lot. Over 20. I was alone in the camping barn, and feeling very alone in general that night. I opened my pack of emergency quinoa, tore off a hunk of bread that was supposed to be breakfast the next morning, and sat glumly on a bench, eating my simple dinner. 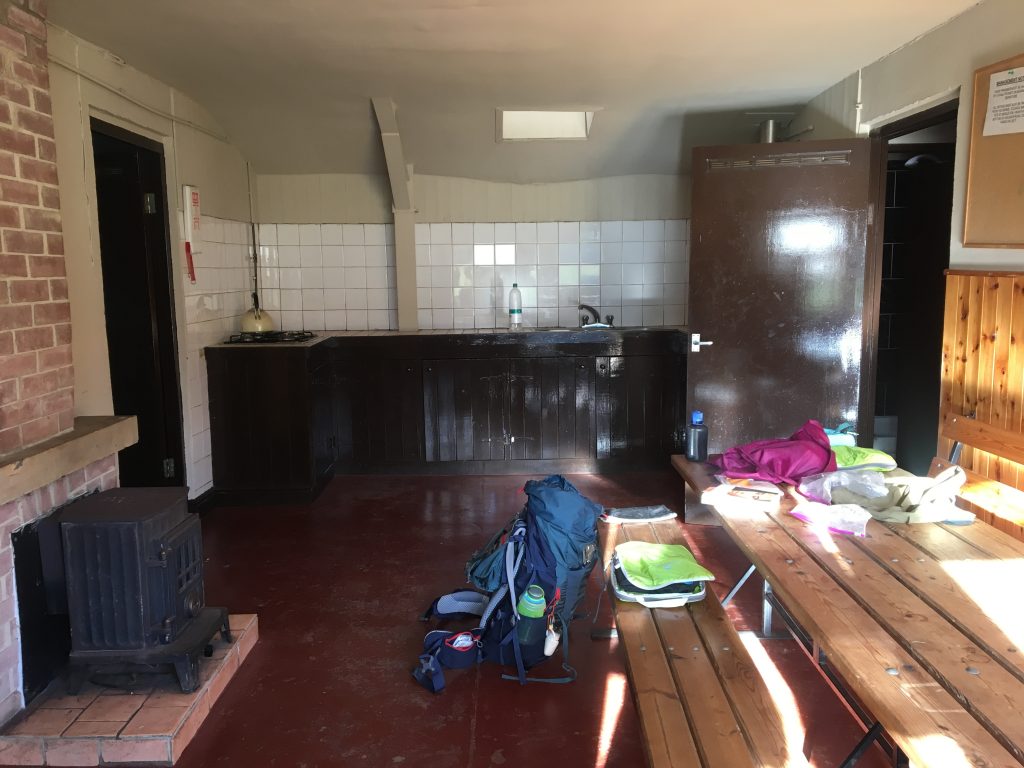 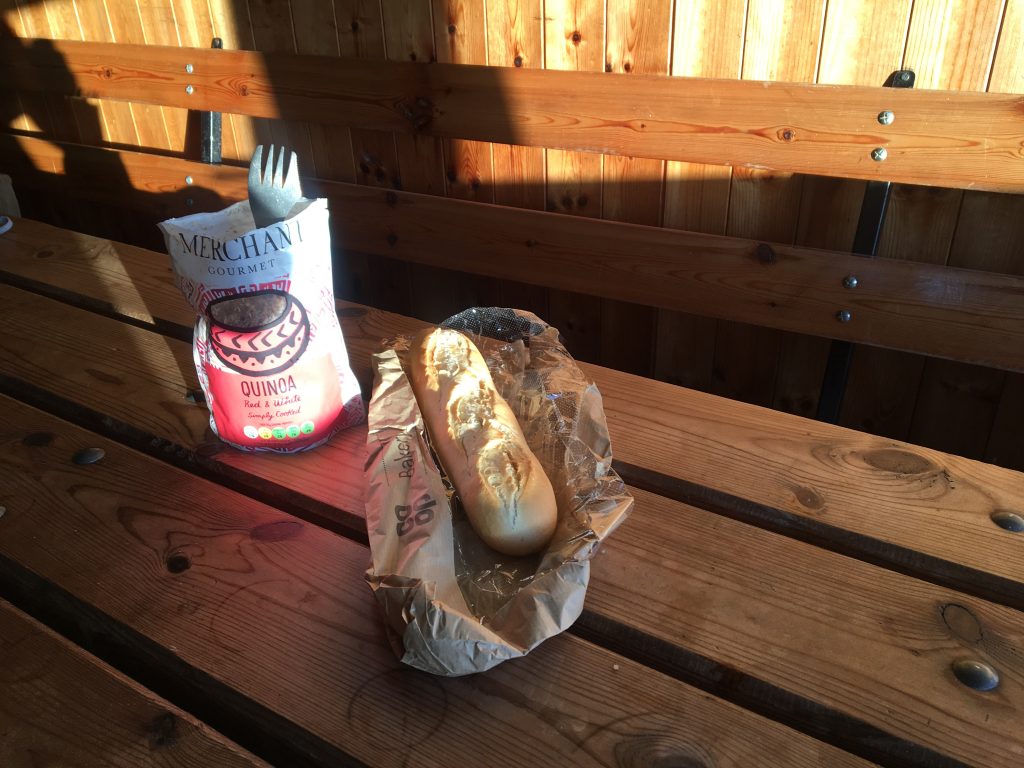 I had enough food, I’d found where I needed to be, I had a bed to sleep in and my body was tired but feeling fine. All of this was true, all of it was important, but I still felt kind of defeated. 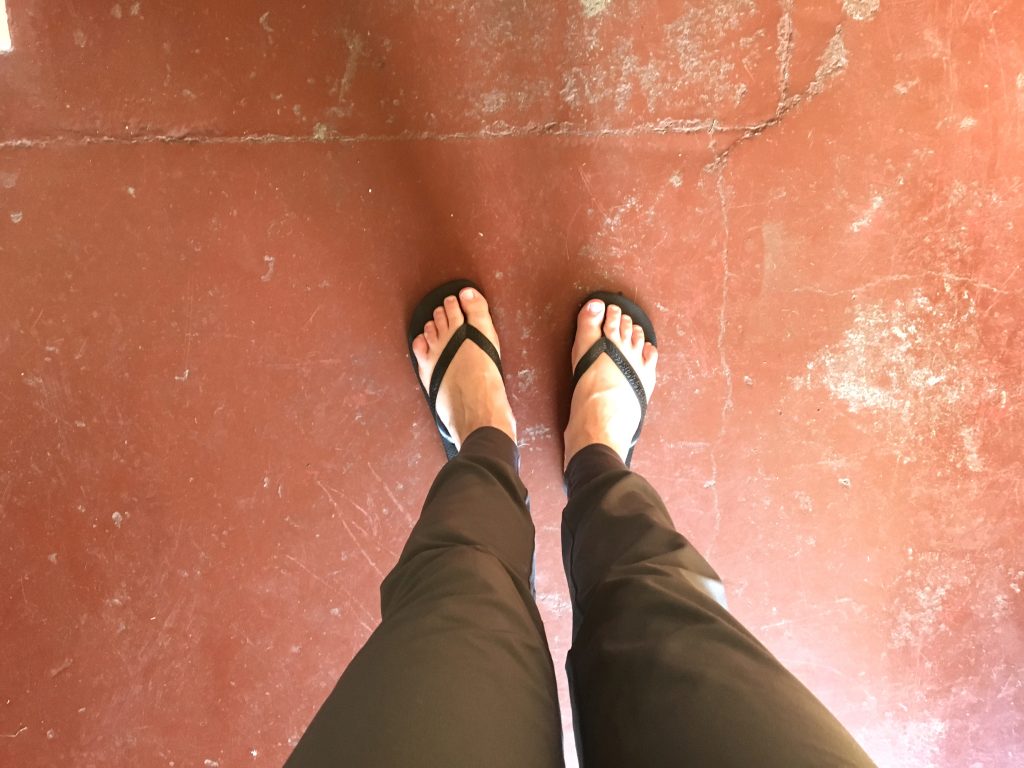 But the light in the fields was golden, and little sheep wandered up to my door, sometimes peering inside. I still had a couple ginger cookies left and so I ate them and read more of Jane Eyre, I read in the dimming light until I could no longer see the words on the page.