Time for another Pennine Way post! Yes indeed, these recaps are rolling out slowly; every time I sit down to write I think, “This is the time I’m going to write as many posts as I can and just get through the re-telling of my Pennine Way journey!” I tell myself that I will combine days, that I’ll just give highlights, I’ve even thought about using very few words and lots of photos.

And maybe I will, eventually, recap the days in an efficient way. But for now, each time I sit down to write, I look through my photos and read the notes I took (if I have any), and I become immersed in memories. And then as I write, I realize that I am trying to find the story of that particular day.

So what, then, will be the story of my Day 7 on the Pennine Way, a 15-ish mile stretch from Horton-in-Ribblesdale to Hawdraw?

This wasn’t an eventful day, in fact, it was fairly straightforward. I woke in my empty bunkhouse at the Golden Lion Hotel, splashed water on my face, threw on my hiking clothes and stuffed my items into my pack. It was early- just before 6am- but the night before, David (my fellow Pennine Way walker who’d helped me find the right path on Day 1) had inquired about an early breakfast and the owner of the hotel agreed to leave out basic items so that we could eat whenever we wanted.

When I arrived in the dining room David and his nephew were already there, and before I could even sit down, the nephew had jumped up and run into the kitchen to bring me a cup of coffee. We ate cereal and toast and fruit, paged through out guidebooks, talked about the days ahead.

David was returning to Malham to walk what he had skipped over the day before, and I would be continuing from Horton. After breakfast and a final rearranging of things in our packs, we said goodbye. Part of me was sad that I was leaving another friend, and to not know if I would see him again; the other part could feel that familiar thrill of the great unknown, that unparalleled freedom of heading into it alone. 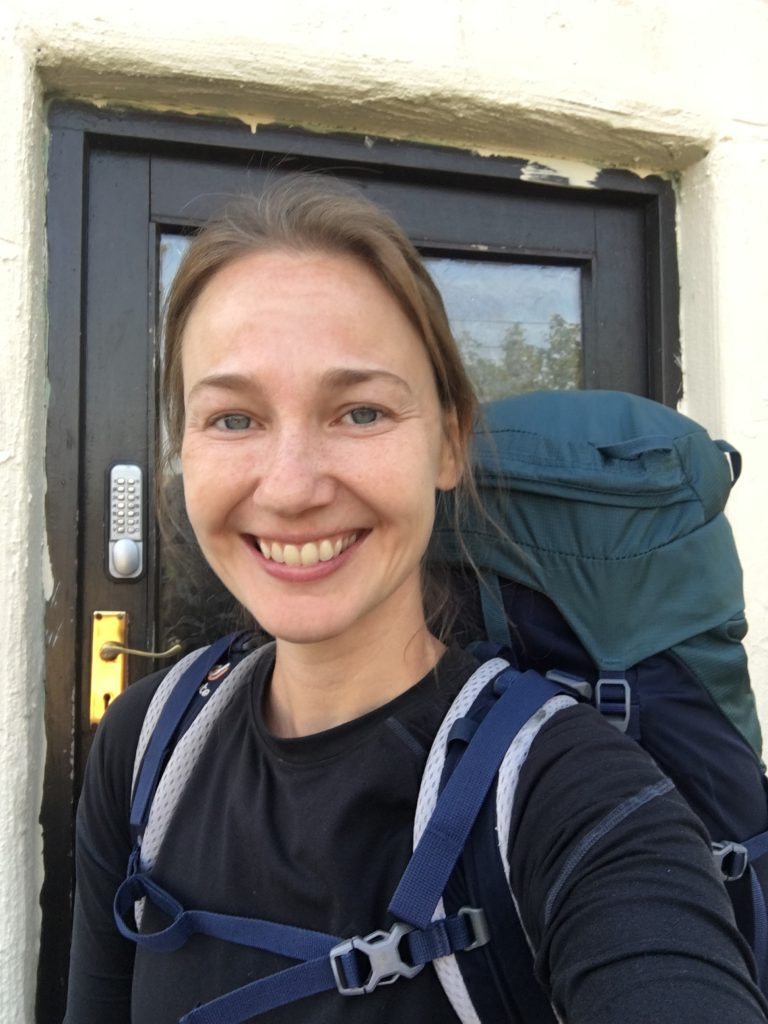 Just before I left I asked David about a walking pole that I’d seen propped up against a corner outside of my bunkhouse. “This isn’t yours, is it?” I asked. He assured me it wasn’t and encouraged me to take it. “If it’s been here since yesterday, I’m sure it’s owner isn’t coming back.”

It was perfect. Just a single walking pole, but exactly what I needed. When I go on these long walks, I typically look for wooden sticks as I’m hiking, and I’ve always found something. But I’d already been walking for 6 days and since the Pennine Way hadn’t passed through too many wooded areas, I hadn’t found anything suitable.

So I headed out, alone, armed with a full pack and a walking pole. The path promptly headed out of the valley and into the hills, through a walled lane up to Jackdaw Hill and on to Cam End. The first mile was the steadiest climb, but afterwards the path flattened out a bit and the walking wasn’t difficult.

My blister situation was also improving. There was still a tiny bit of pain but nothing like it had been just two days before, when I’d had to take a train and skip a portion of the walk. Today, I was finally starting to feel good.

I walked on, and on. What is the story of the day? Maybe it’s just this: the walking. I was mostly alone, only passing two people coming from the opposite direction, who had started the Pennine Way in Kirk Yetholm and were walking south. They warned me about the lack of water at the northern end of the hike, but told me that the scenery was stunning.

I was carrying a packed lunch that I’d ordered the night before, and eventually I found a flat rock lodged into a hillside with a sweeping view below and I settled down here: my pack at my side, my socks and shoes peeled off, my feet resting in grass, the warm sun on my back. I ate my sandwich and chips and apple and tucked the Twix bar away for later, and then laid down across the rock with my head against my pack. The weather was that perfect in between: not too hot, not too cold, and a soft wind blew against my face.

“This is why I walk,” I thought to myself. That intimidating first day full of rain and wrong turns and numb fingers and aching feet felt very far away. Laying here on this warm and sunny rock, I felt so content, so strong, so sure of myself.

The path continued, I continued. Gradually the route wound down into the valley and towards Hawes, an old English town that holds a weekly market. As luck would have it, I was passing through on the day of the market! I wasn’t staying in Hawes- I would be continuing another mile and a half to Hawdraw- but I stopped anyway to take care of some errands.

I didn’t regret my idyllic lunch on the hillside, and I was arriving in Hawes a little too late for lunchtime anyway, but the smell of the fish and chips shops was tantalizing. I contented myself instead with walking up and down the street and listening to the bustle, weaving in and out of villagers and tourists, carefully not to bump into anyone or anything with my large pack.

There was a grocery where I stopped to pick up a few supplies, most importantly a new tube of sunscreen (of all the things that I didn’t think I would be needing to restock on! But with the sun shining strongly every day and the coming forecast showing more of the same, I was worried about running out). While waiting in line, a man who must have been in his 70’s started talking to me, and asked if I was walking the Pennine Way.

I asked if he could remember what his favorite part of the walk was, and he told me it was Swaledale, an area I would be walking through the next day.

Before I left town I stopped for an ice cream cone, and ate it on a bench in the shade. The remaining walk to Hawdraw was easy and short. I was staying in the bunkhouse of the Green Dragon Inn, but I was beginning to learn that no two bunkhouses are the same. This particular one was connected to the Inn and the pub, down a series of hallways and up a staircase and I worried that I would never be able to find my way back out. And the bunkhouse was more like the floor of an old hotel, or motel, or a dormitory. There was a long hallway lined with doors that led into separate rooms, presumably all holding bunkbeds. In keeping with the trend of the trip, I was totally alone up there: alone in my room and alone on the floor. There was a tiny kitchen that was cramped and not exactly clean, but I gladly put some cheese and fruit into the fridge. My room was clean and the bunk bed was comfortable, and the shower had hot water so there wasn’t much more I could have asked for. 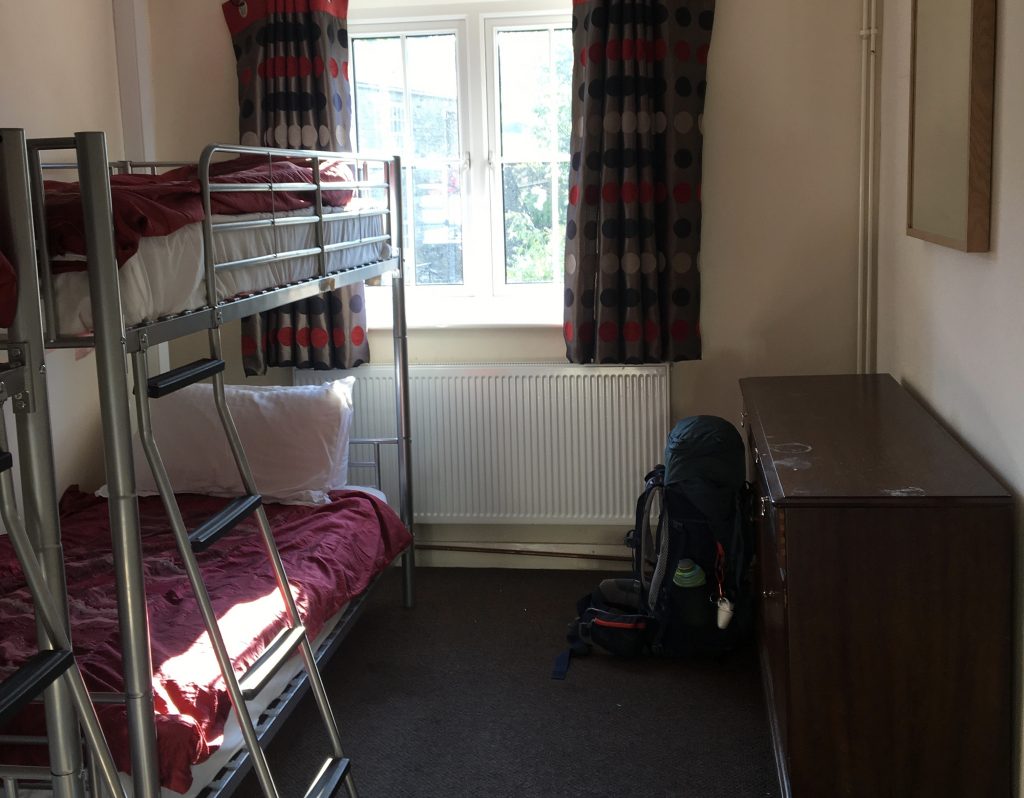 Dinner was in the pub downstairs (after a few false starts, I eventually found my way back); I drank a beer and ate a huge meal in what was probably my favorite pub of the trip (the building dates back to the 13th century!). There were no other Pennine Way walkers- none that I could see in any case- and the patrons of the pubs seemed to be either locals or tourists just passing through.

But I didn’t mind the quiet evening, and after dinner I went back to my room to read a little (you guessed it!) Jane Eyre.