I’m sitting at my desk, trying to get some writing done, but I keep resting my cheek against the palm of my hand and closing my eyes. So I turn up my music and take another sip of coffee and try to stay awake.

I haven’t been getting enough sleep. Every night I intend to get to bed early- asleep by 11- but it never quite works out. We have late dinners and the sky doesn’t darken until after 10 and Diane always makes coffee. When I do get into bed at a decent hour, my mind spins with the things I did and saw during the day, and all the things I want to do tomorrow. It takes me forever to fall asleep.

I wake up every morning a little after 7, and am nearly always the first one up in the house. Sometimes Jean Christophe beats me downstairs, but he always drinks his tea on the library steps and I eat my breakfast on the terrace table; we can both enjoy the peace and quiet of the morning and not bother each other. It’s a good arrangement.

Last night was movie night: Susan downloaded Impromptu (a movie about George Sand and Chopin and a bunch of artists and writers who gather in the south of France) on her computer and we set up in the library. A storm rolled through late yesterday afternoon, dropping the temperatures by at least 20 degrees, so Artis and I tried to build a fire in the wood stove. She threw pages from her notebook into the stove to burn, but they wouldn’t catch; the fire was short lived, so we all bundled up in blankets, drinking tea and eating shortbread cookies instead.

The church bell was striking one by the time I was in bed and drifting off to sleep. Less than four hours later, I was awake again. Something had interrupted my dream and woken me up- I lay in bed, listening carefully. Just as I was closing my eyes I heard the noise again- there was something moving around near the armchair in my room.

I crept out of bed, turned on the light, and glanced around my room, staring at the armchair where I thought I heard the noise coming from. At first nothing, and then, slowly, a big black thing crawled out onto the t-shirt I had draped over the back of the chair.

A few days ago, Artis (who has been to La Muse several times before) was telling us about the giant spiders she’d found hiding between the bed and wall of her room. “You guys haven’t seen the spiders yet??” she asked. That night it had taken me over an hour to fall asleep.

So my first thought, when I saw this huge black thing in my room, was that it was one of Artis’ spiders. I stared at it; presumably, it stared back at me. I stood at the foot of my bed, he stood on my armchair, neither of us moved. The showdown lasted at least 10 minutes, as I tried to figure out what to do. There was no way I was going to be able to fall asleep with the thing still in my room, and there was no way I was going to try to kill it.

Finally I decided that the best solution would be to creep over to my window and open it, then drag the armchair to the window, and attempt to get the spider, or whatever it was, outside.

I moved slowly, quietly, the thing moving its head a bit, but otherwise remaining motionless. I opened my windows and then tentatively gave the armchair a little shake, to see if the thing would dart away. It didn’t move.

Inch by inch I slid the armchair across the floor, its weight dragging on the tiles, making a lot of noise. Once the armchair was positioned under the window, I reached out and grabbed the edge of my t-shirt. I took a deep breath, counted to three, and then flung the t-shirt out the window. It fluttered down to the terrace below, laying in a heap beneath my window. The black thing- maybe a strangely shaped spider, maybe a little bat?- went with it.

A few hours later I woke up and went downstairs to have breakfast, finding my t-shirt neatly folded on the table in the library. Someone, probably Jean Christophe, must have found it. I vaguely wondered what went through his head when he saw the t-shirt on the terrace. I figure I’ll explain later. After my nap. 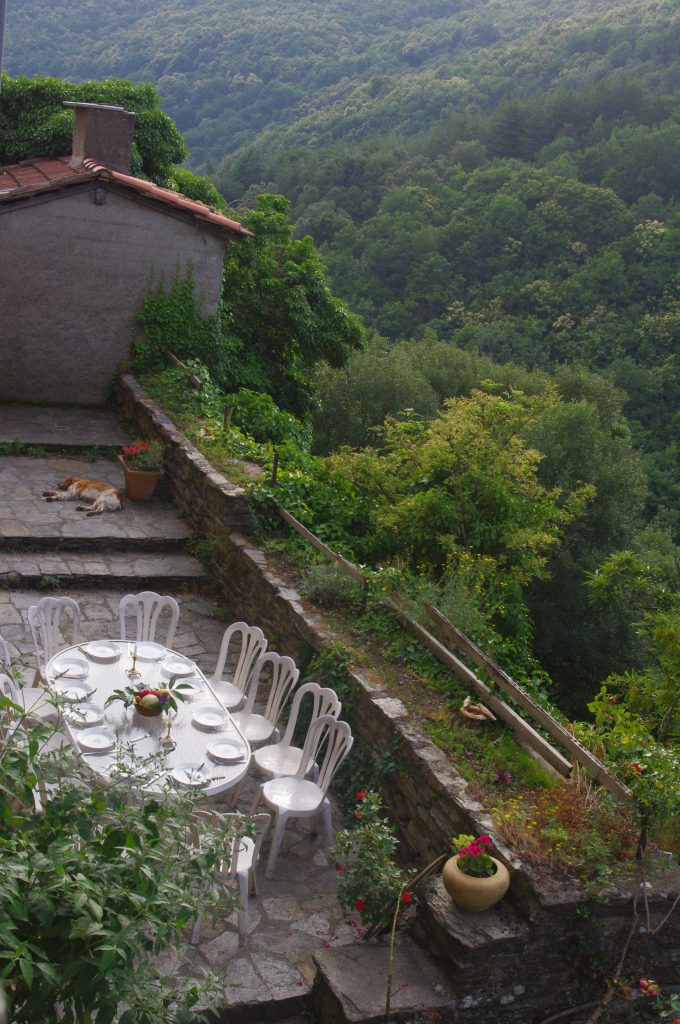 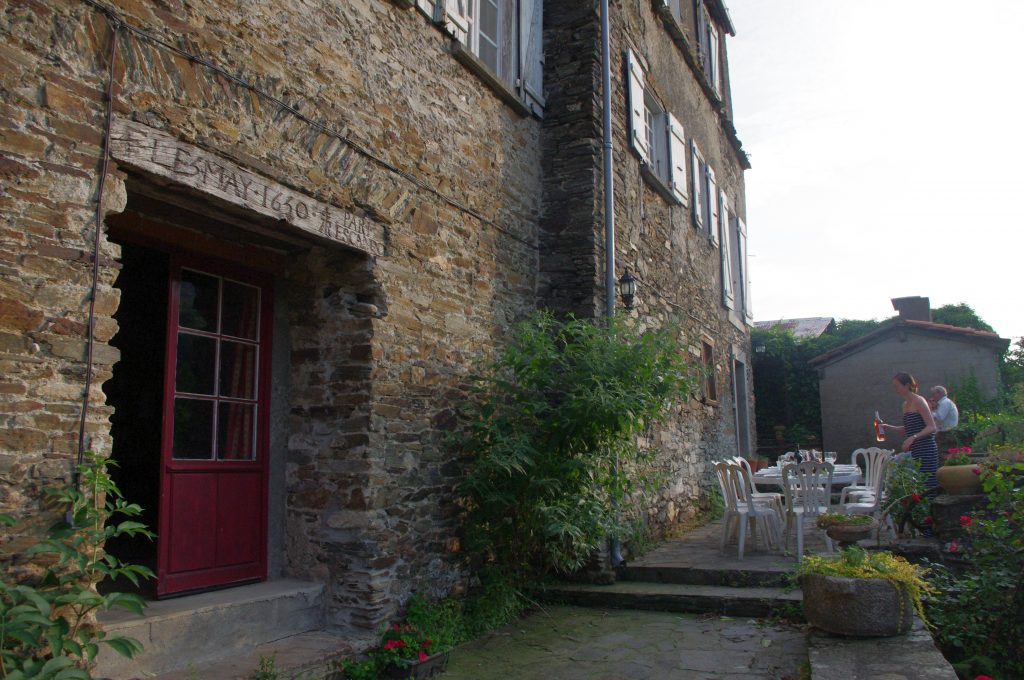 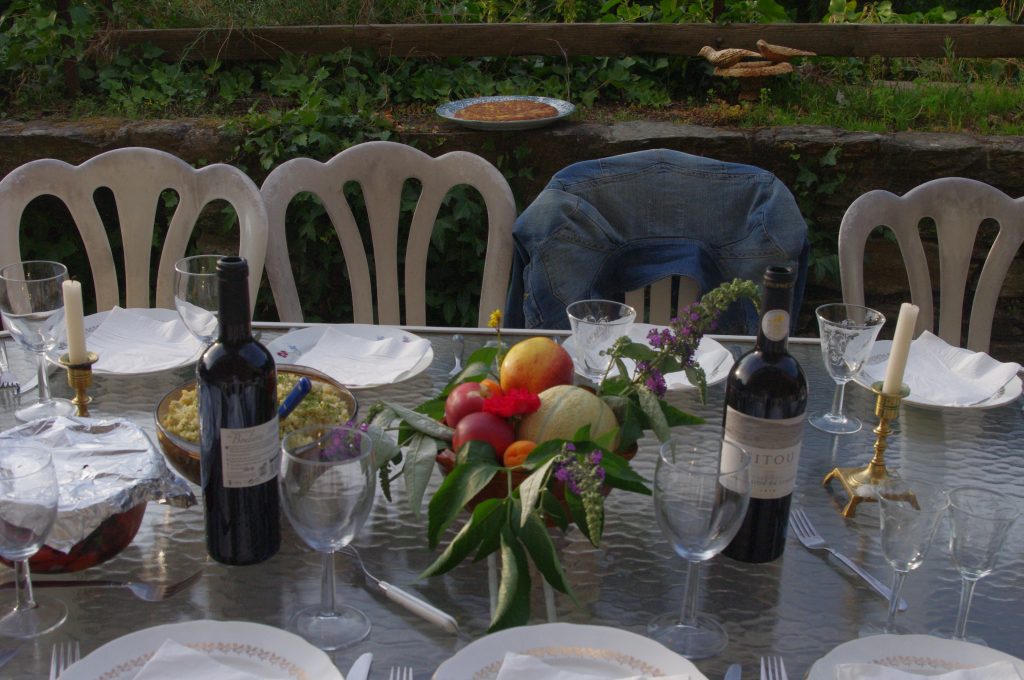 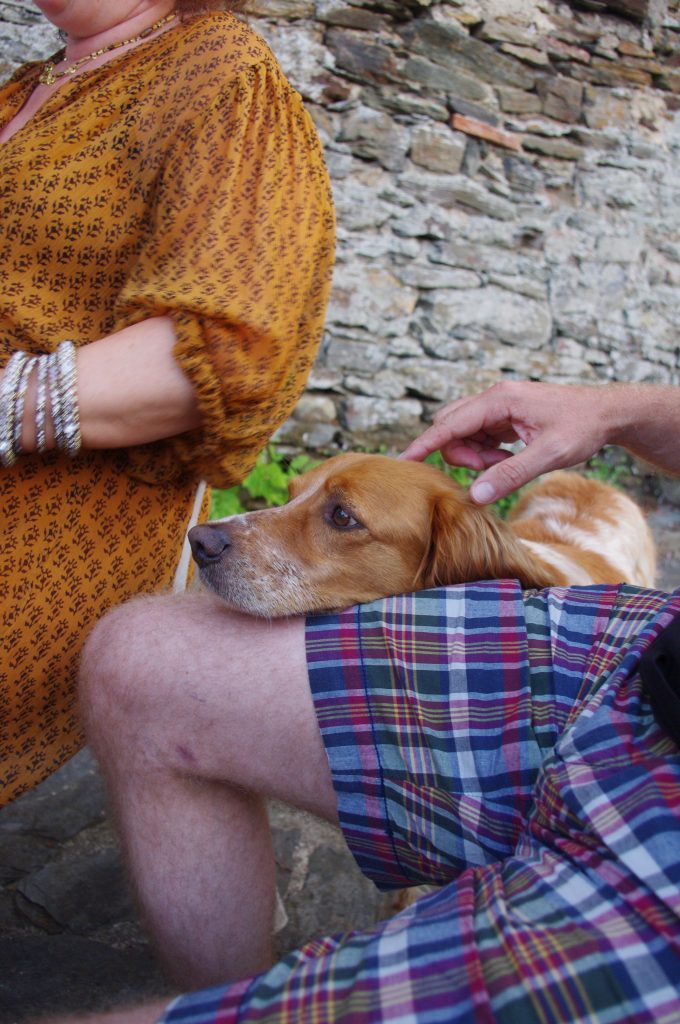 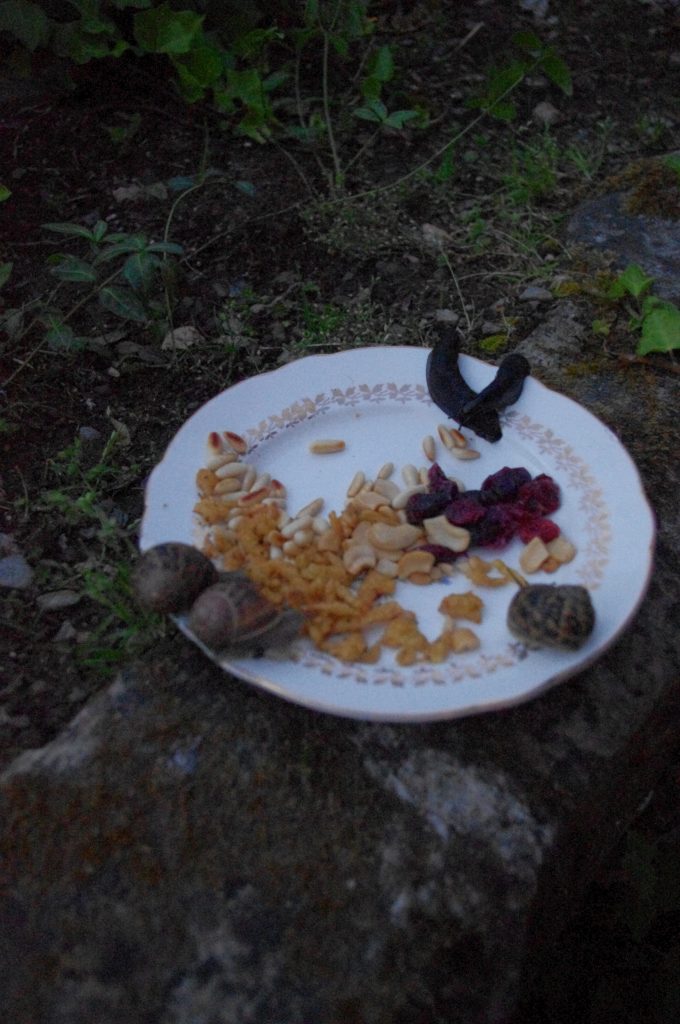 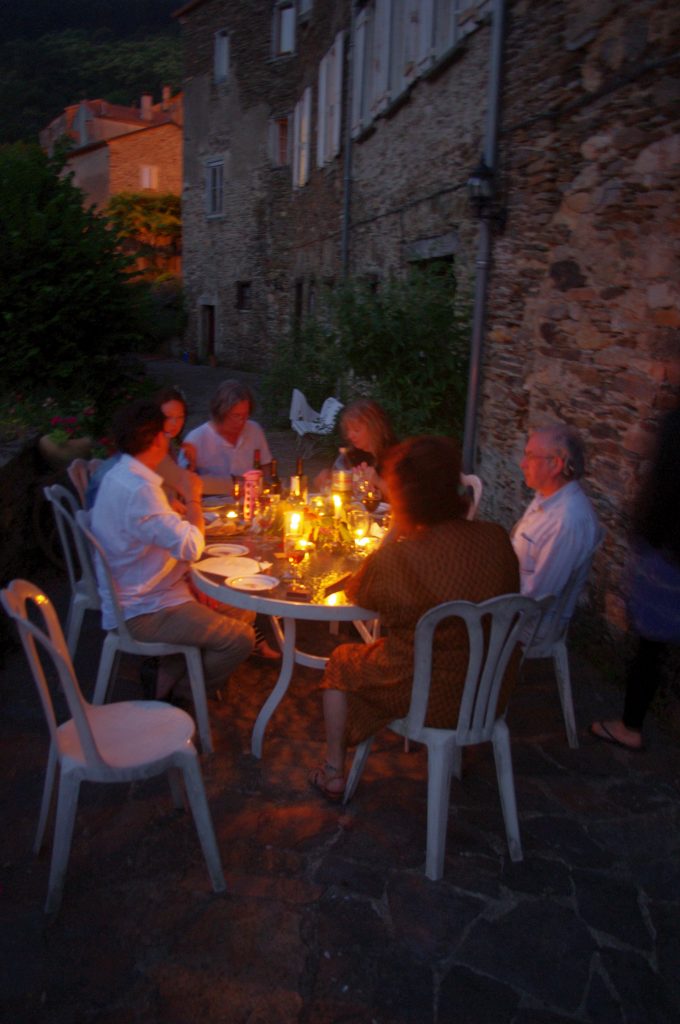 I’ve noticed there’s something that happens every time I walk outside here. Whether it’s to the source to fill up my bottle with fresh spring water, to wander around and explore the village, or to go on a hike- every time I step outside, I end up going somewhere I hadn’t intended.

This is what happens: I don’t know my way around yet. It’s a very small village, yet there are winding streets and alleys with staircases and hidden paths and little bridges everywhere you look. So I set out in one direction, and then wander off because something catches my eye, and this continues to happen until I’m much further from where I intended to be. But the result is incredible beauty. And discovery. And surprise. And delight.

I’ve been to many places that I consider beautiful, but this is by far the most beautiful yet. It’s magical. It’s wild and overgrown and decaying and alive.

I took a lot of photos today. I headed off to the source, at the bottom of the village, with a couple of empty water bottles and my camera. As soon as I left the gate of La Muse, I turned right instead of the usual left, to check out what was at the bottom of the path. I found this: 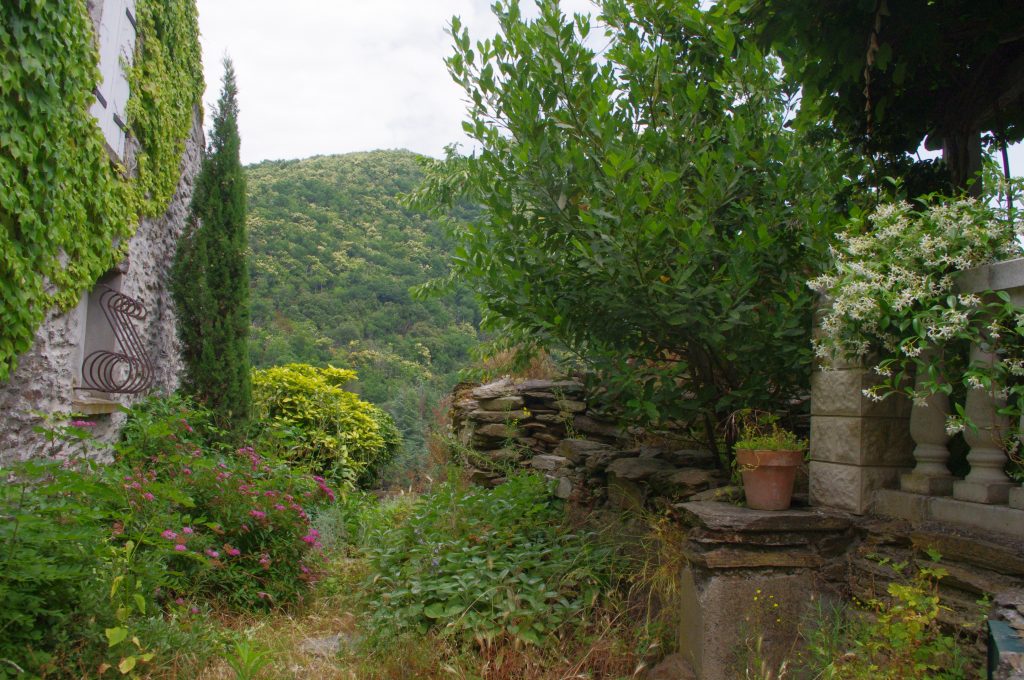 I wound my way back to the “main” street, and took a road I hadn’t been on. It led me through the village, past houses and people eating on terraces, onto a path leading to the gardens. Days before, I’d noticed a zigzagging pattern on the hillside next to Labastide, with stone walls cutting vertically across, separating plots of land. I’d been wondering how to get over there. 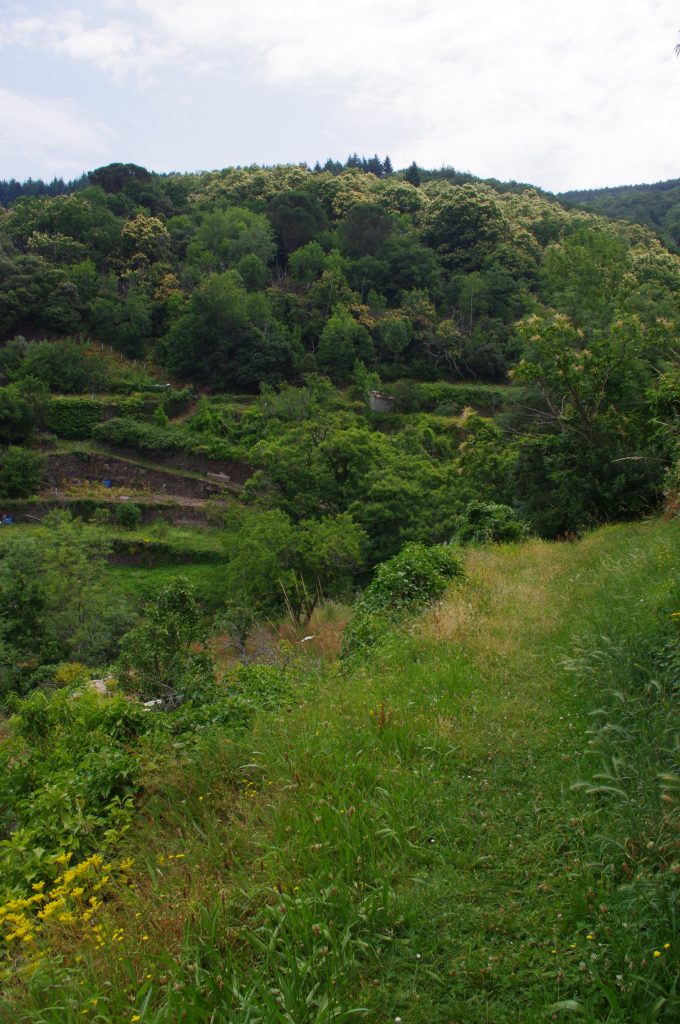 I started walking down the trail, further and further until I realized that my sandals were holding me back, and I’d have to put on better shoes for more exploring. So I came back into the village, filled my water bottles, and started slowly heading back to La Muse. The details are everywhere, and they are stunning: 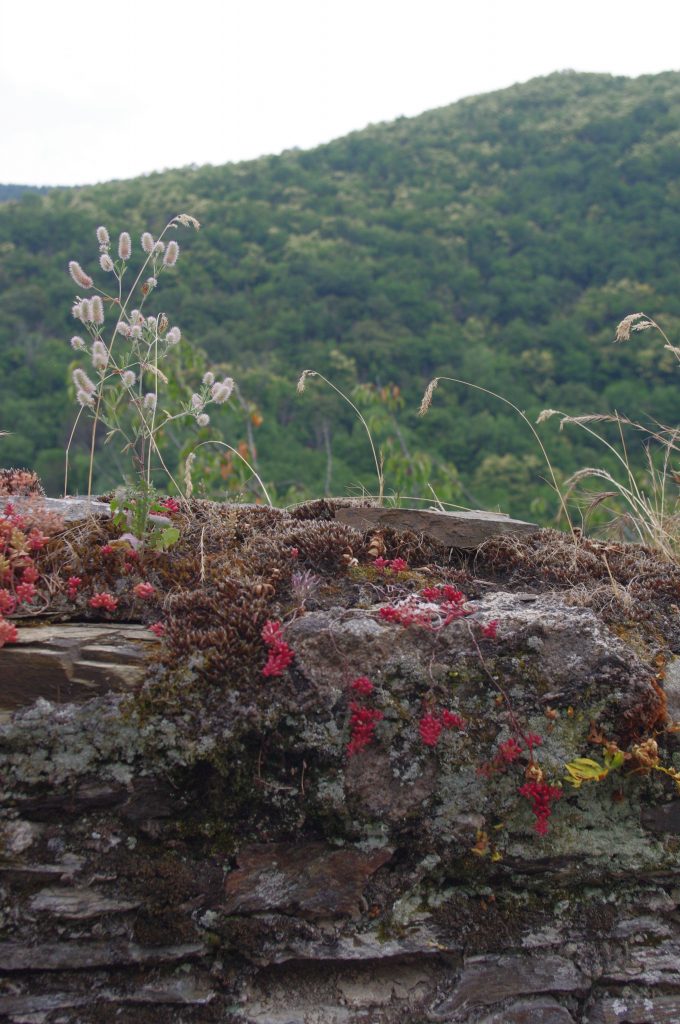 I ran into a couple of cats, they were picturesque as well. (This one posed for me, like he knew I had a camera):

I took over 60 photos on that little walk, and I easily could have taken 60 more. Later in the day I ventured out again with my film camera, to the farmhouse ruins to take more photos. Each day I find a place that I want to return to, as well as a new place to explore or path to take. Cross your fingers for a rainy day, because it might be the only way for me to get any writing done.