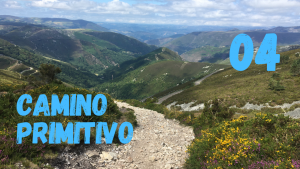 We woke up to a breakfast of toast and yogurt and coffee and one by one left the albergue to head into the mountains. I walked this route six years ago, but it felt like such a different Camino then, for so many reasons. And the day I walked Hospitales back then, the weather had been bad: foggy and misty the whole way up the mountain, we couldn’t see anything. But today? Today was glorious. You could argue that I could have had nicer weather; the morning was mostly overcast, so I didn’t get blue sky and sunshine (not until the afternoon). But I had the views, and it was incredible what was up there all along. 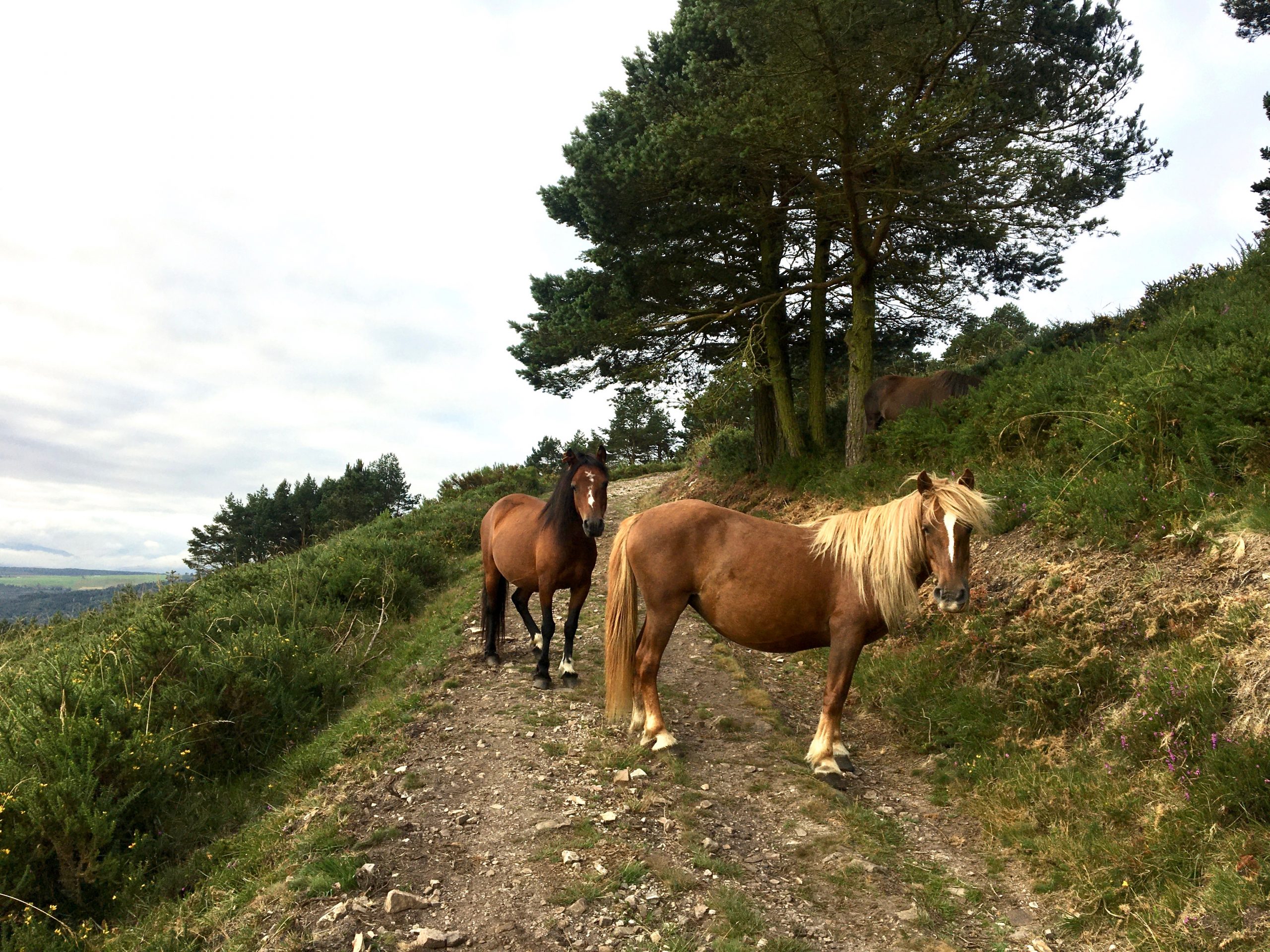 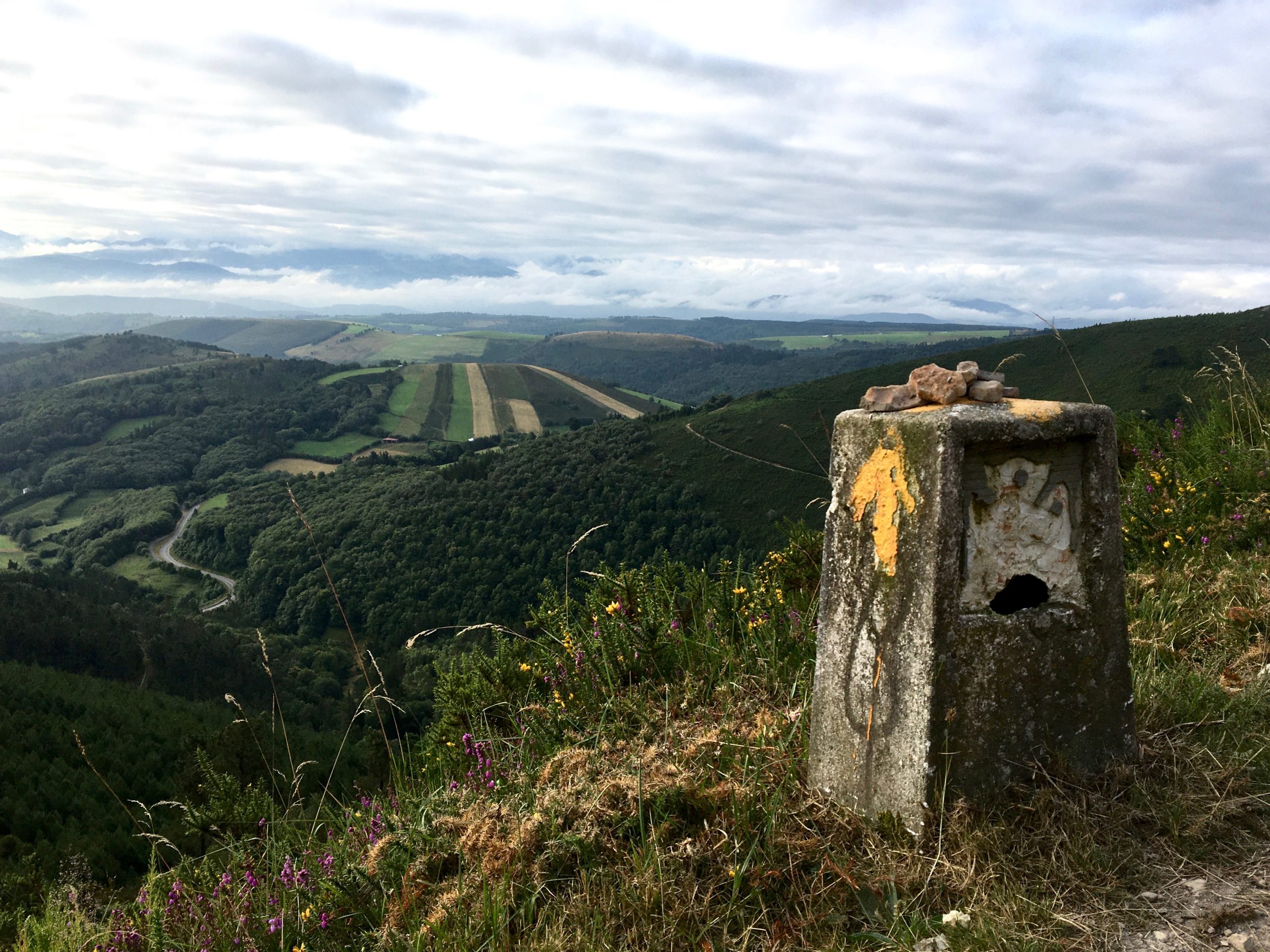 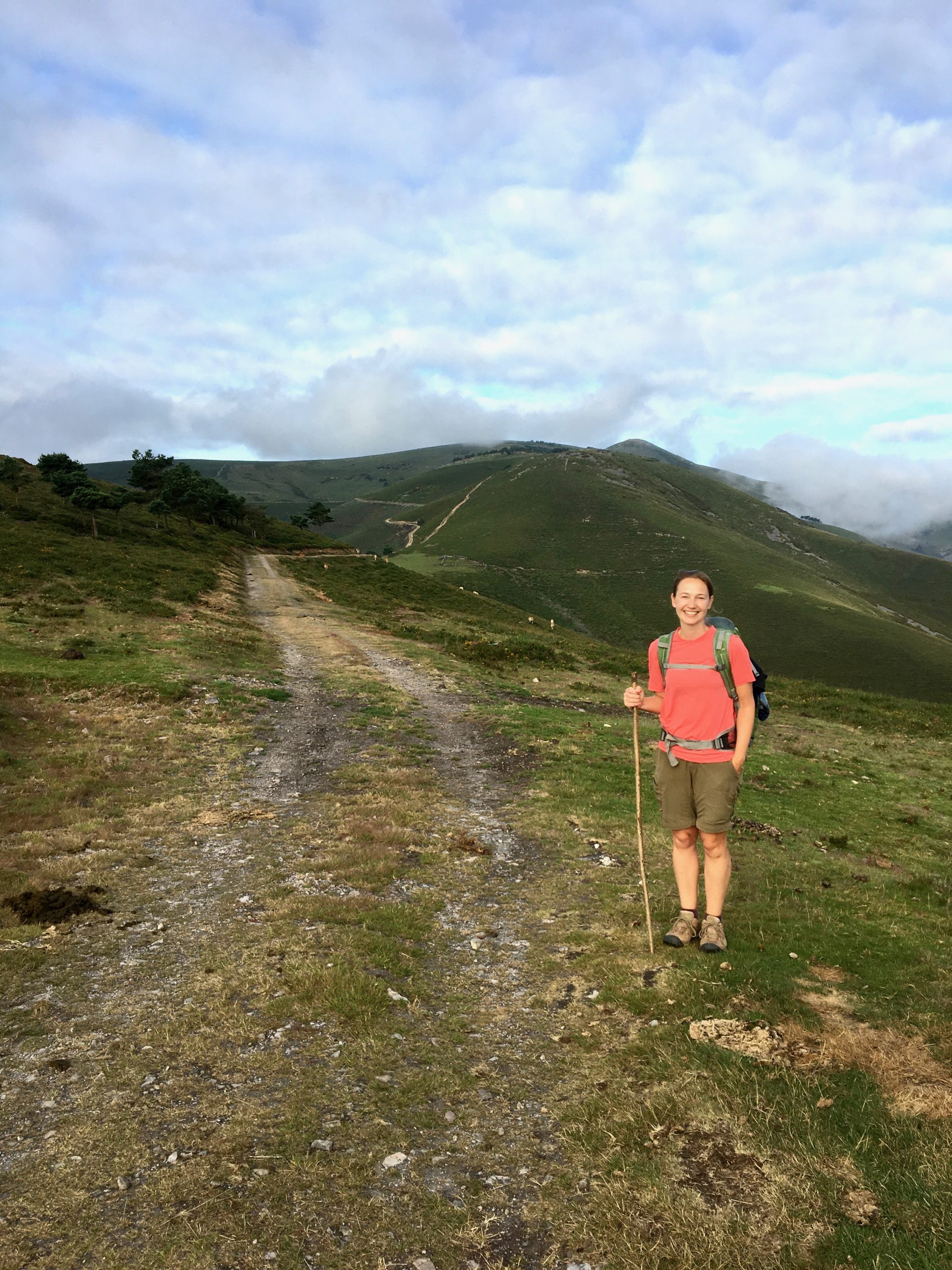 This is when the memories really came flooding back, too, from that first walk on the Primitivo in 2015. It was on the Hospitales day that year that I made my three Camino friends, the little family I stuck with for a few days. That time with them- “the kids”, I call them, because they were all in their early 20s- was really special. And it was at the top of the Hospitales route, when I was huffing and puffing up the final big hill, that Nicolas emerged through the fog, sitting on a rock and eating an orange.

This year, as I made that same climb, I could see more clearly to the top, and I could see Nicolas’ rock. I was stronger this time, still a little out of breath as I climbed the hill but my legs felt solid. I’d moved just ahead of Giuseppe and Rudolph and Antonio during the climb and so it was just me at the top, in the wind and the clouds, next to the Nicolas rock and I looked down and I convinced myself that the curl of an orange rind would be here, half hidden in the grass. I looked for it, I looked for the evidence that I had been here before but I suppose the evidence, if we’re lucky, is all in our heads. It’s in the remembering, the recognition of a rock, the whiff of an orange rind on the wind.

My sentimental notions didn’t last long; Rudolf was close behind and he joined me at this little summit and we cheered and laughed because it was so beautiful there. “Most of the climbing is done?” Rudolph asked. “Really? That wasn’t as bad as I feared.” He paused, and reached down deep into a pocket of his bag and pulled out a beer, still a little cold. “You don’t happen to have a cup with you, do you?” 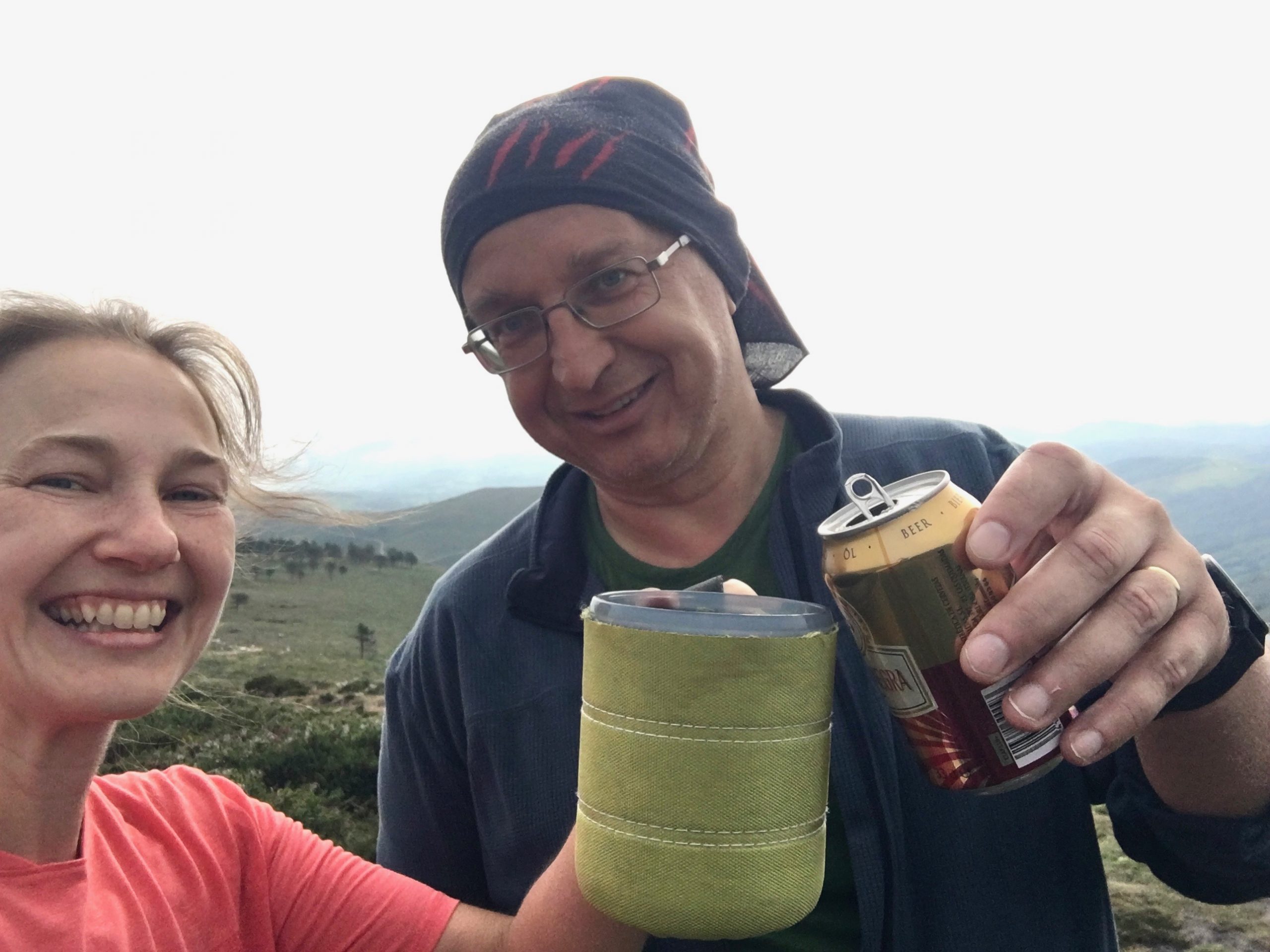 Why yes, in fact, I did! He cracked open the beer and poured some into my camping cup and we toasted, clinking the can and my cup together, a little beer sloshing over the sides, and we cheered and drank deeply and then stood in silence, looking out over the mountains, the clouds rolling below us, the vista stretching and stretching. Soon Giuseppe was here, and then Antonio, and for those moments it was me with my three new friends, triumphant and happy. 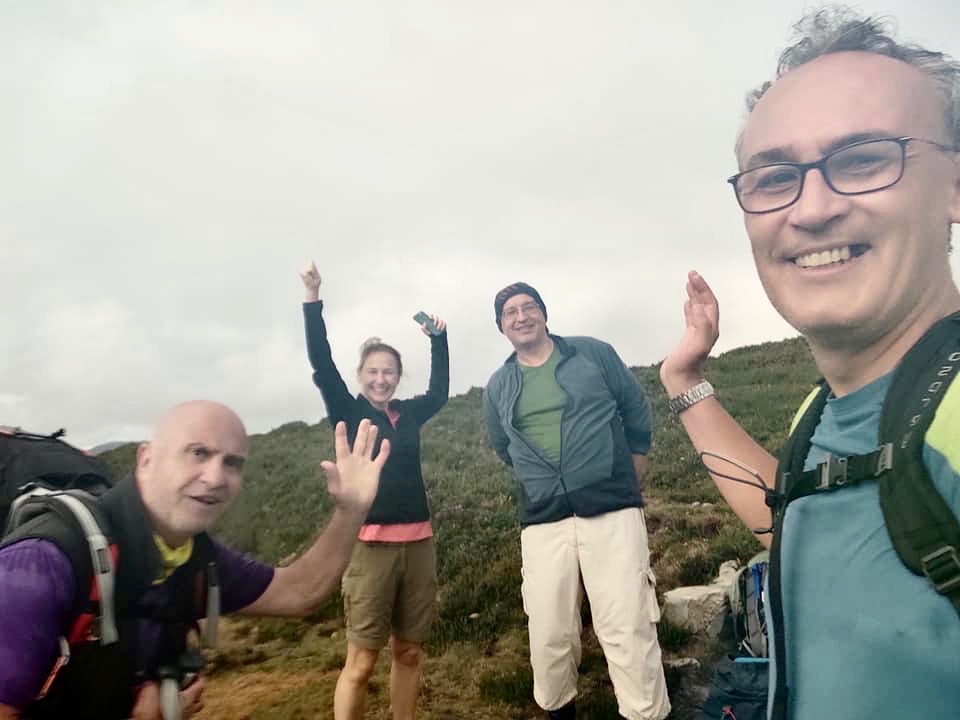 One by one we left our celebratory spot, I was the last to leave. I lingered behind, and then- mostly keeping Rudolph in sight- followed more slowly behind. I took my time that day. Sometimes it feels like I’m racing through my days on the Camino and I never actually am… I’m just walking fast, because that’s my pace, and when I’m feeling strong I just naturally settle into a quick and steady rhythm. But walking the Hospitales route, I deliberately slowed myself down, because I needed more time to take in all that was around me, and to just absorb being back here. Rudolph and I flip-flopped as we made our way across the ridge, pausing to take photos and videos and comment on the cows, the little purple flowers. 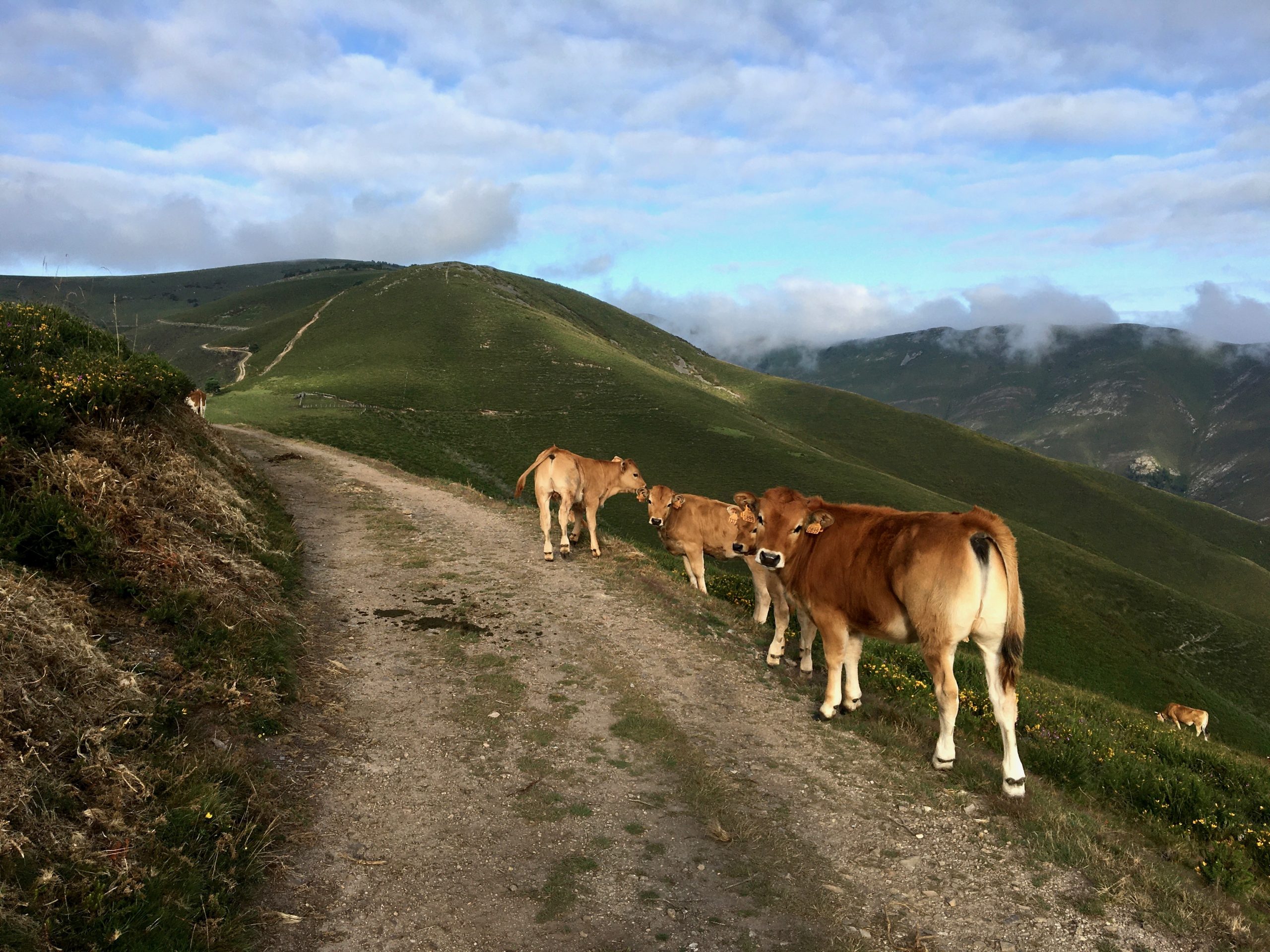 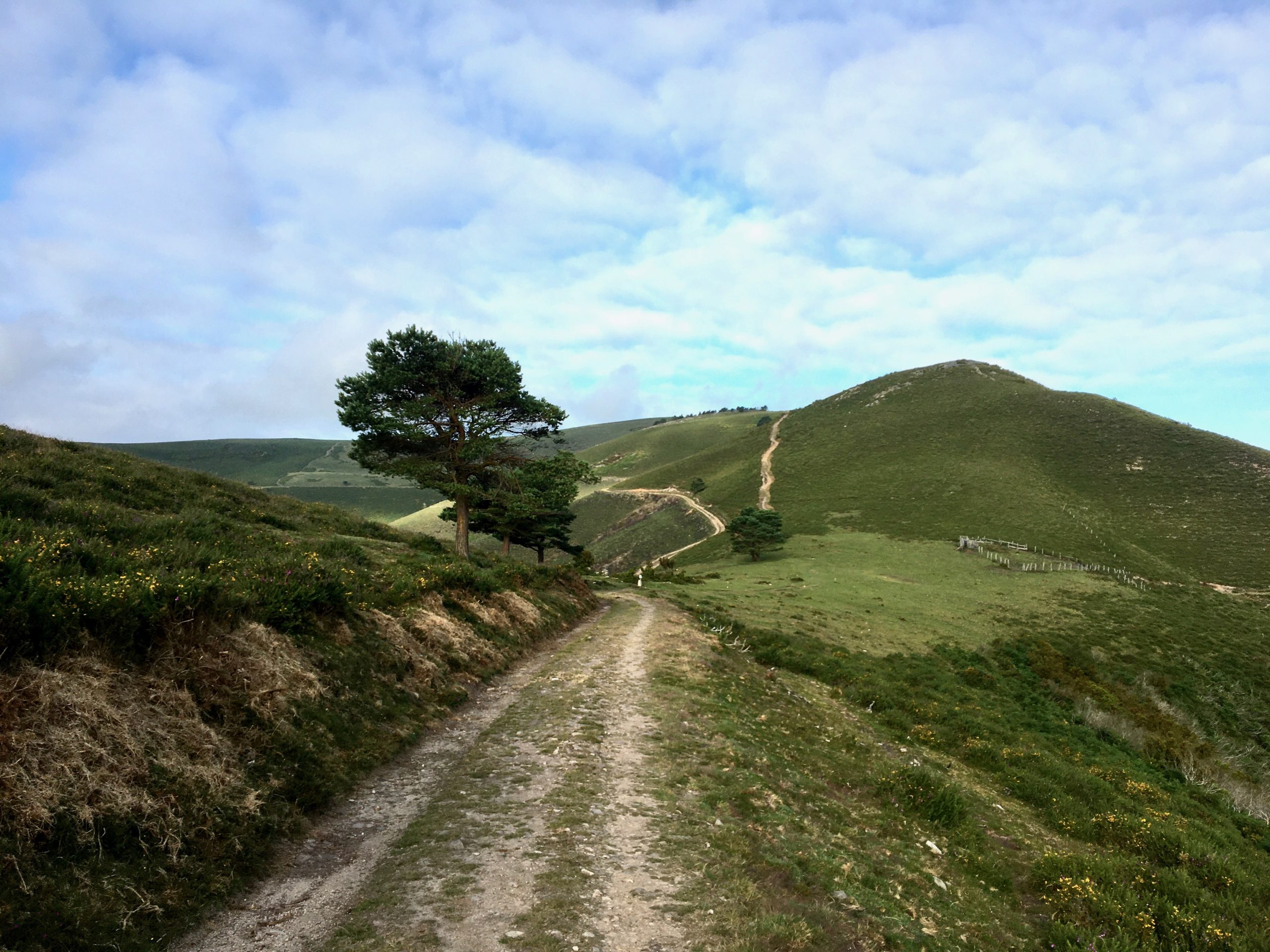 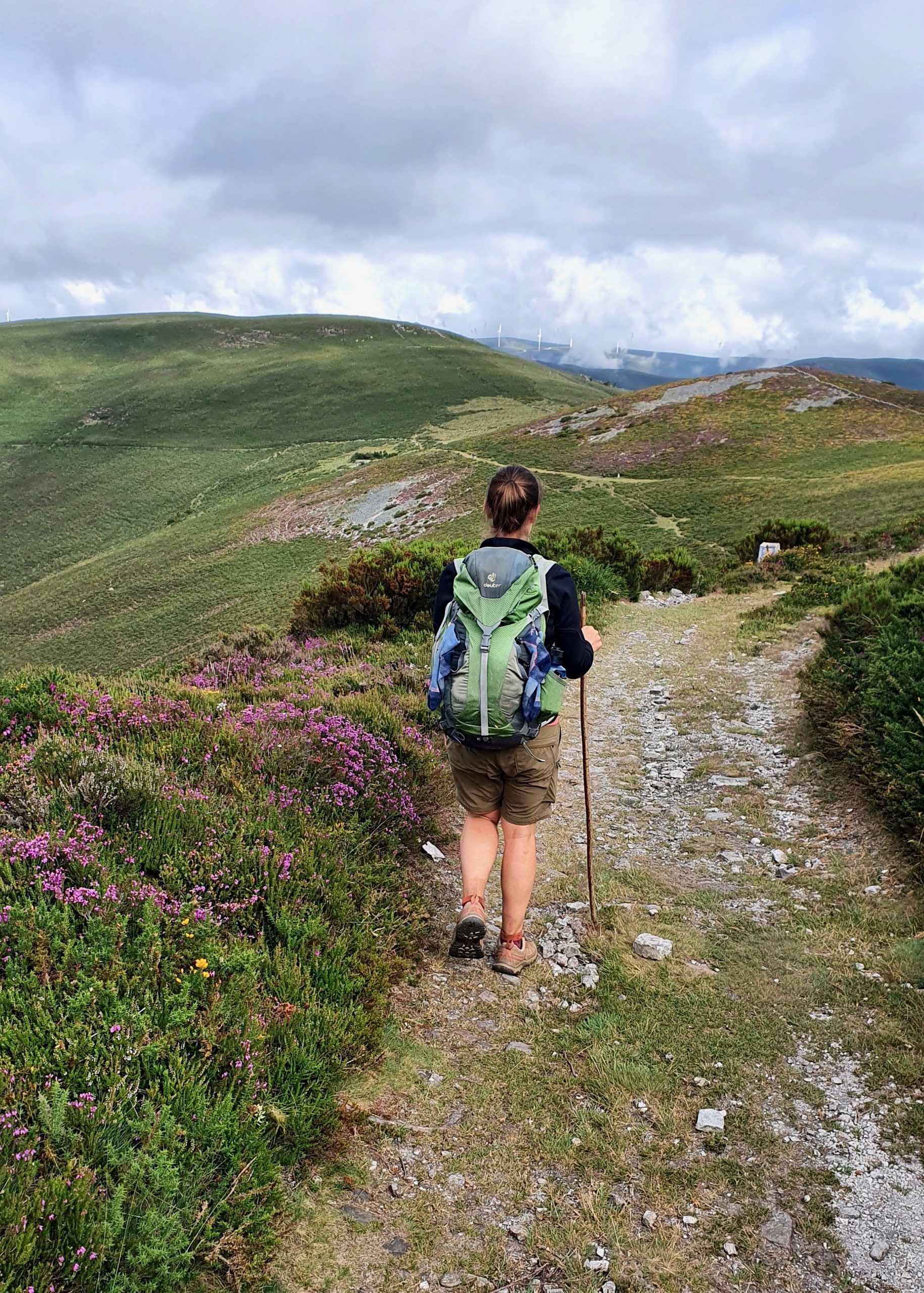 Just before the path begins it’s somewhat treacherous rocky descent, we all joined up again at a little rest spot with picnic tables, and that’s where we met Kelsey, a young American woman. She’d started her Camino in Oviedo but a few days before I had; she’d recently had trouble with tendinitis and hadn’t taken the Hospitales route because of it (our rest stop was about where the Hospitales and Allende paths meet up). 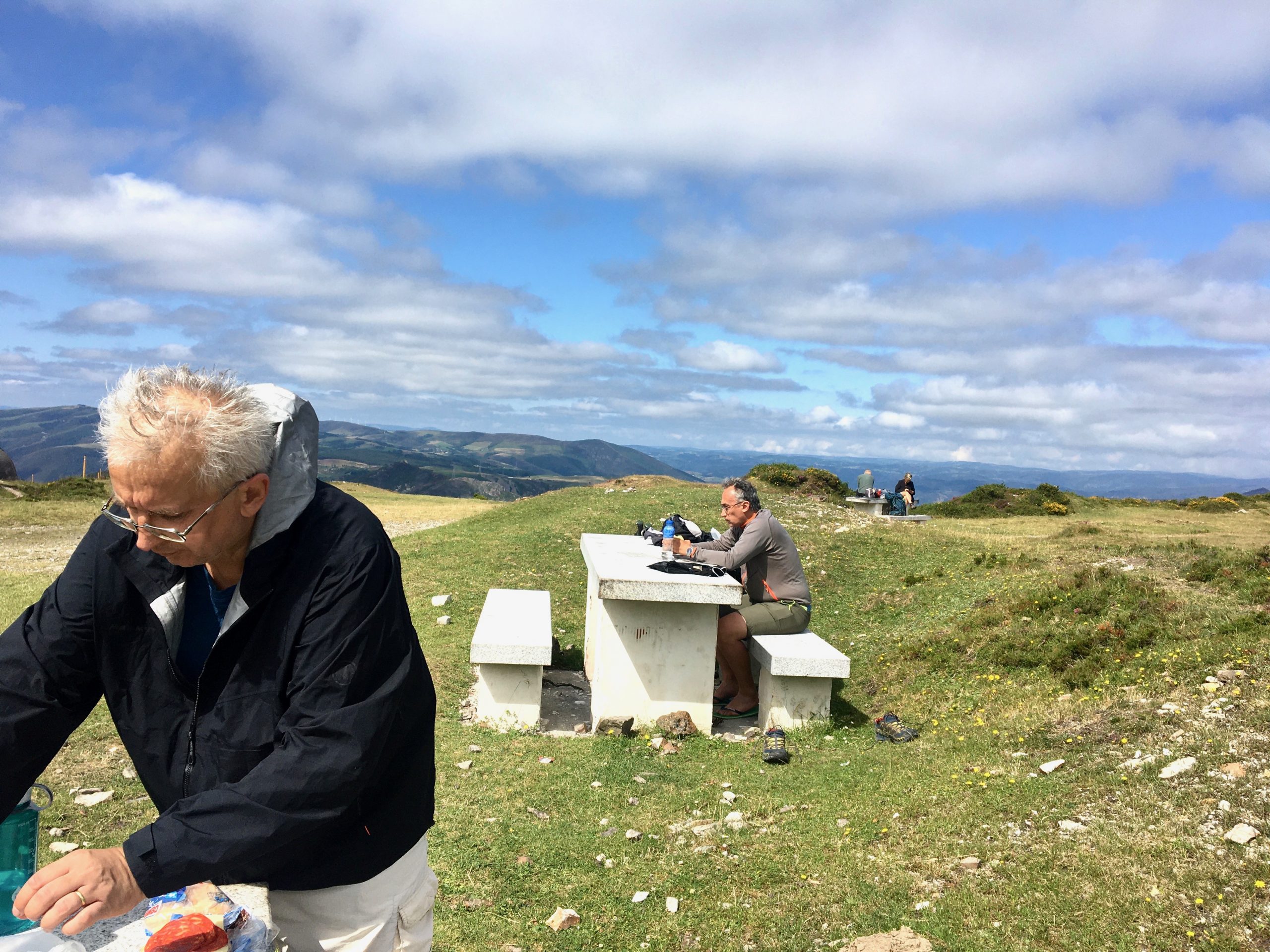 I could tell that Kelsey was excited to meet another solo American woman, and I suspected that she wanted to walk with me, but I hesitated. Readers of the blog will know that I’m rather intent and protective of my solo walking time, and I wasn’t sure that I wanted to spend some of this beautiful stage walking and talking with someone new, getting to know them. I let Kelsey go on ahead with the others, but eventually I caught up, and I think there’s a Camino lesson in here for me. Kelsey and I walked together for the next hour or two, and while I didn’t get to quietly take in my beautiful surroundings as much as I wished, or sink deep into my own thoughts and memories, the time with Kelsey was good. She was still figuring out the Camino, figuring out who she was on the Camino, and it was kind of beautiful to witness this. She’d spent some time with other pilgrims who hadn’t been very encouraging, who’d passed judgment on the way she was walking, and I realized that I had the opportunity to be the very opposite. I could be positive, and open and welcoming. I could walk with her for a few hours, and in those few hours, could be her friend.

And then we arrived in Berducedo and we stopped to have a drink and it turned into the most beautiful afternoon of pilgrim community. I have to say, after my experience on this stage in 2015 and again this time six years later, I think there must be some sort of magic in these hills. Giuseppe and Antonio and Rudolph were already at the bar, and one by one, other pilgrims that I’d met in the last few days walked up. Karl from La Espina, and André from Cornellana, and then Kinka from Cornellana and then we were this big group, and I was introducing people and we were all smiling and drinking beer and wine and sitting back in our chairs, feet stretched out in the sun, a long and beautiful stage completed, nothing left to be done but eat and drink and be with new friends. 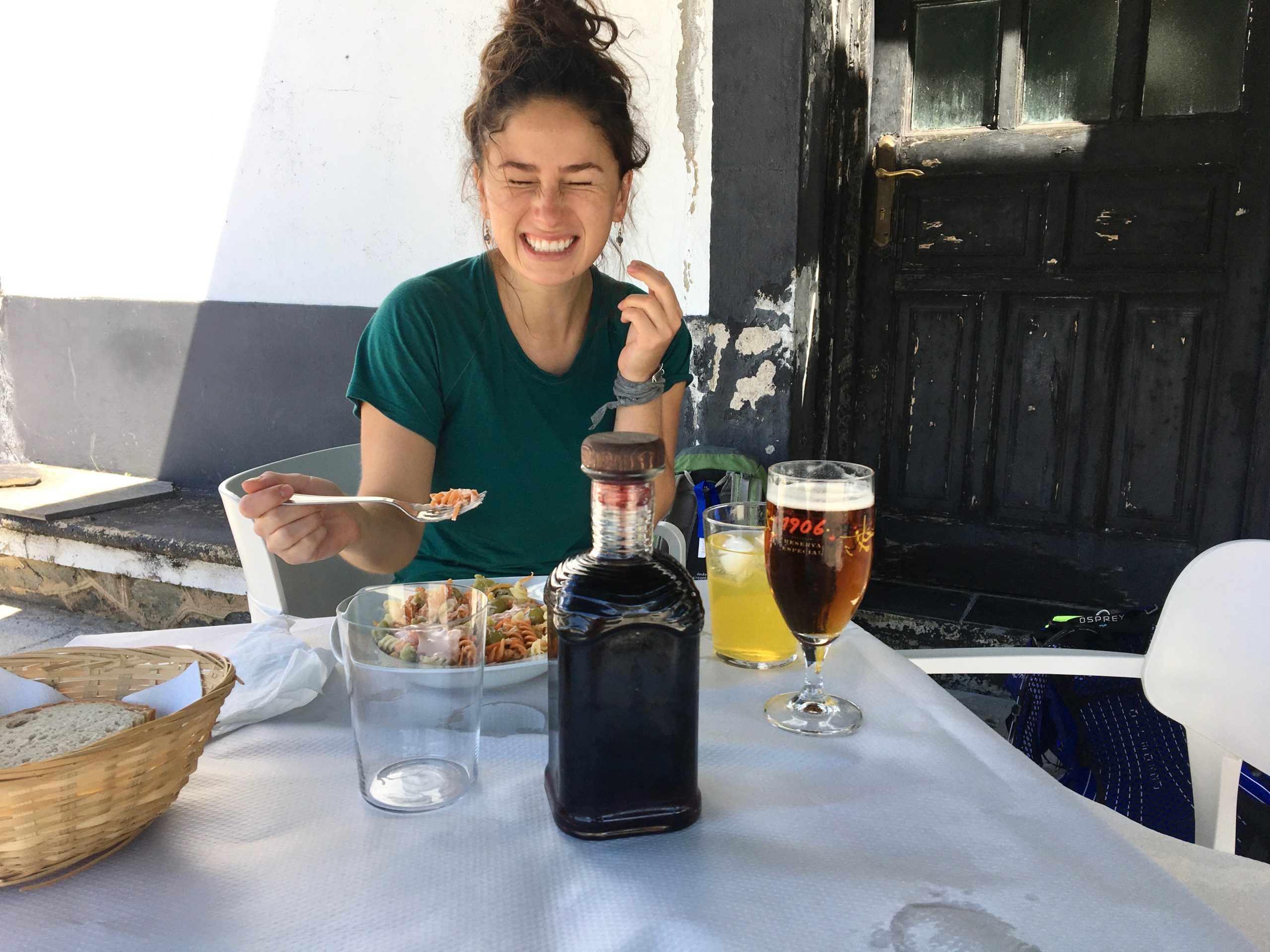 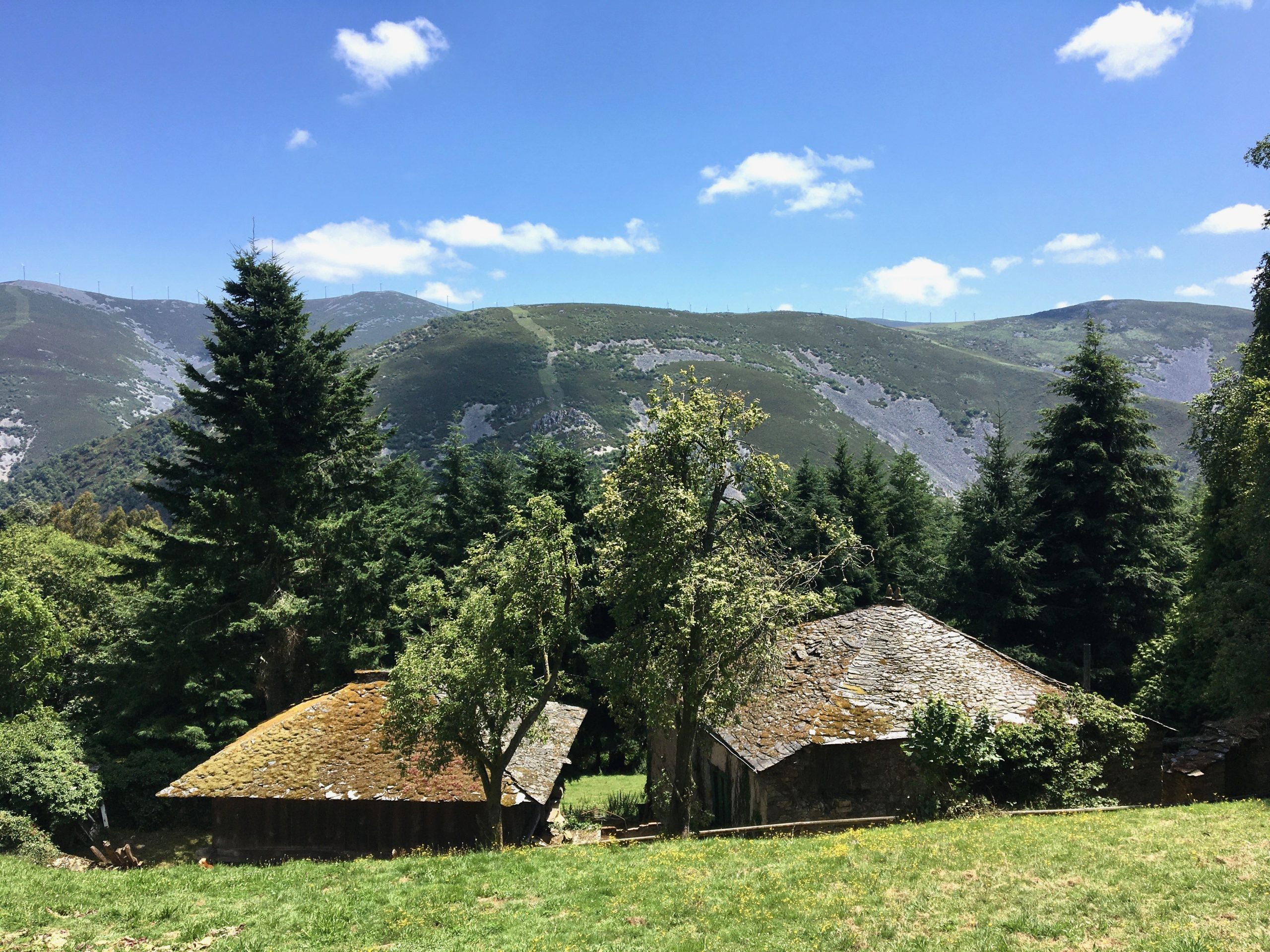 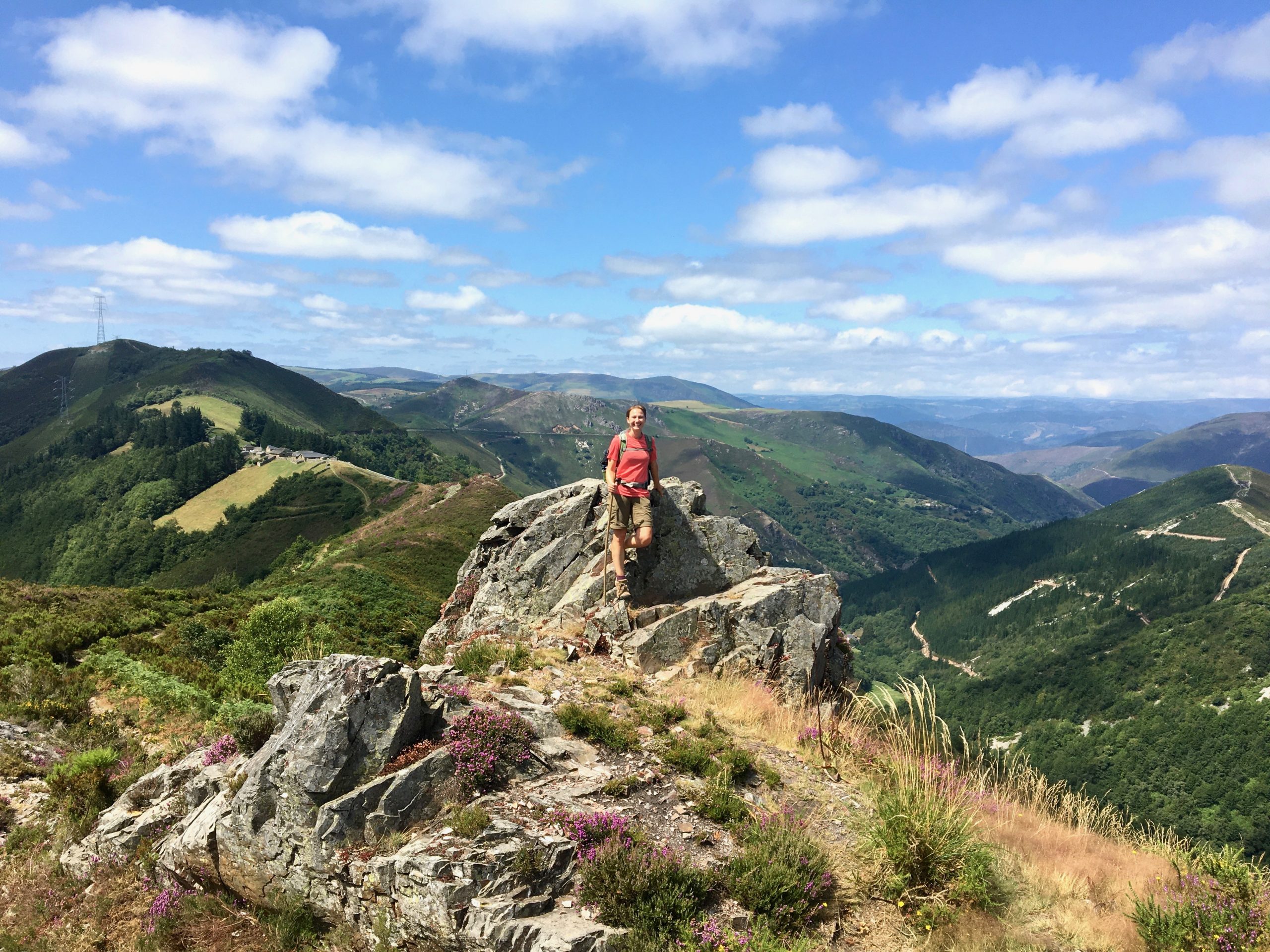