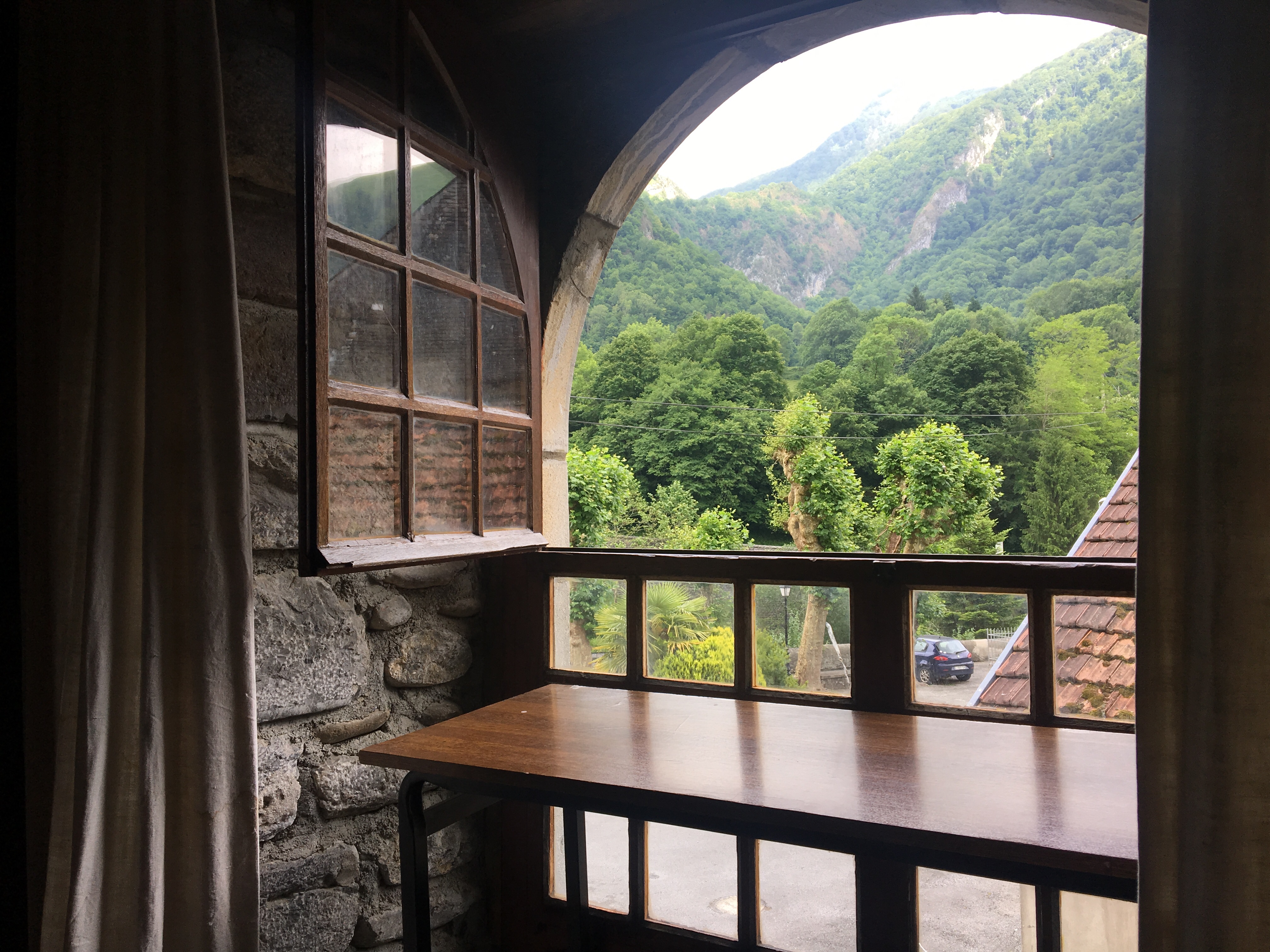 I promised myself I wasn’t going to commit to any long posting while on the Camino (for fear that without enough time I wouldn’t post at all), so I’m here with a photo and just a little story. I want to share all the details: how I went the wrong way when leaving town this morning, how my pack feels heavy but not too heavy, how I found the perfect lunch spot, how I met two friendly dogs who wanted to walk and play with me, how I’ve moved closer and closer to the mountains and am now in the mountains.

There was all of that. And, also, I made my first Camino friend, a young woman named Alodia, from Spain. She began walking the Arles route four years ago and has continued in bits and pieces since then. She started one day before me, and planned to walk just 4 days into Jaca, where her pilgrimage would end. We met last night in the gîte in Oloron, then ran into each other in the Carrefour (grocery store), then had dinner together back at the gîte.

She left early this morning- by 6:30- so I didn’t see her until I arrived at the monastery on Sarrance, where we’re both staying for the night. As soon as I saw her I noticed something was wrong. She’d dropped her phone and it broke, and she decided to catch a bus in the morning and end her pilgrimage early.

I think she wrestled with this decision, but ultimately didn’t feel comfortable walking into the mountains alone without a way of contacting help if she needed it (I decided to get a Spanish phone number for this very reason!). And once she decided she needed to end, her mind was made up.

“Something is telling me that I need to end,” she said. “I don’t know why, but I have to listen.”

We spent some of the afternoon and evening together, and just now, she knocked on the door to my room to say goodnight.

“I have something for you,” she said, and held out her hand.

In it was a blue ribbon that she’d received in Zaragoza, at the Church of Our Lady of Pilar. Inside the church is a pillar that is topped with a statue of the Virgin Mary; brightly colored ribbons, 15-inches long (the length of the statue) are offered to visitors and represent protection and blessing.

“The tradition says that whoever gets the ribbon from the church is supposed to pass it on. It has walked all across France with me, and now you have it to carry onward.” Alodia passed the ribbon over to me.

I’ll hang it from my pack tomorrow, and I’ll think of the protection it offers. I still have a very long way to go, and these mountains are tall, and the forecast calls for rain. And, it’s been several years since I’ve walked this great of a distance. I know I can do it, I’m excited to do it, but standing at the beginning, the way looks very long.

So goodnight from my bunk room in a monastery in the mountains; more soon.