(July 2018) Day 12 on the Pennine Way took me from Alston to Greenhead, and overall the walking was straightforward and uncomplicated. It had been a few days since I could say that (field wanderings, a missed dinner, a drained cellphone, exhausted legs, hill/mountain climbing, no coffee), and so I was looking forward to this stage.

I think, however, I need to add a note about the weather. If you’ve been following along, you may have noticed that I’ve written- “It was another day of blue skies and sunshine”- in nearly every post. If I didn’t write it, the photos have shown you how great the weather was during my walk. 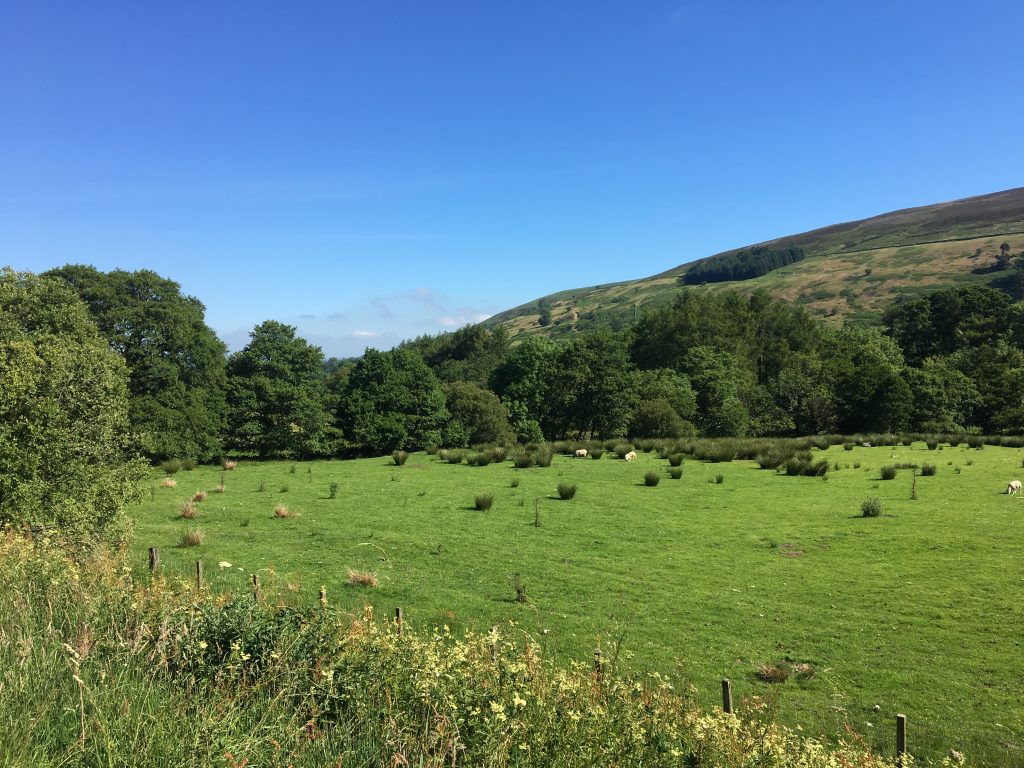 And, you guessed it, my 12th day was no different and the weather was perfect. So when I say that this stage was straightforward and uncomplicated, it’s especially easy for me to say that because of the weather. A fellow Pennine Way walker is posting photos from his trek over on Instagram; he walked in the fall and I think he walked at least half of his trek in the rain. He had 8 days in a row of soggy boots! He just posted some photos from the same stage I’m writing about today, saying that he walked through what is the wettest and boggiest section of the entire Pennine Way, at first trying to walk with plastic bags wrapped over his shoes, then forsaking the bags and just tramping through the mud and water and soaking his boots clean through.

I look at his photos and I remember what the same walk was like for me. I, too, walked through the fields that are known as being the ‘wettest section of the way’. What do I remember from this section? I only remember focusing on navigation and looking for signposts. Maybe I walked through a small puddle? Maybe one? But I doubt it.

The Pennine Way wasn’t an easy walk, it was the most difficult one I’ve done so far. Sometimes I wonder if I would have loved it as much as I did if I hadn’t had such nice weather. I remember how miserable so much of that first day was, my only day of rain: how difficult it was to navigate and keep to the trail, how cold my hands were, how wet my socks and shoes became. As I’ve been trying to churn out these posts, it’s meant that I’ve immersed myself in memories from my walk, and it’s so easy to long to be back on the trail, it makes me want to plan another walk in the UK. And I’m sure I will, but I also need to always remember that the beauty of my experience had a lot to do with the weather.

Okay, enough rambling, back to Day 12! 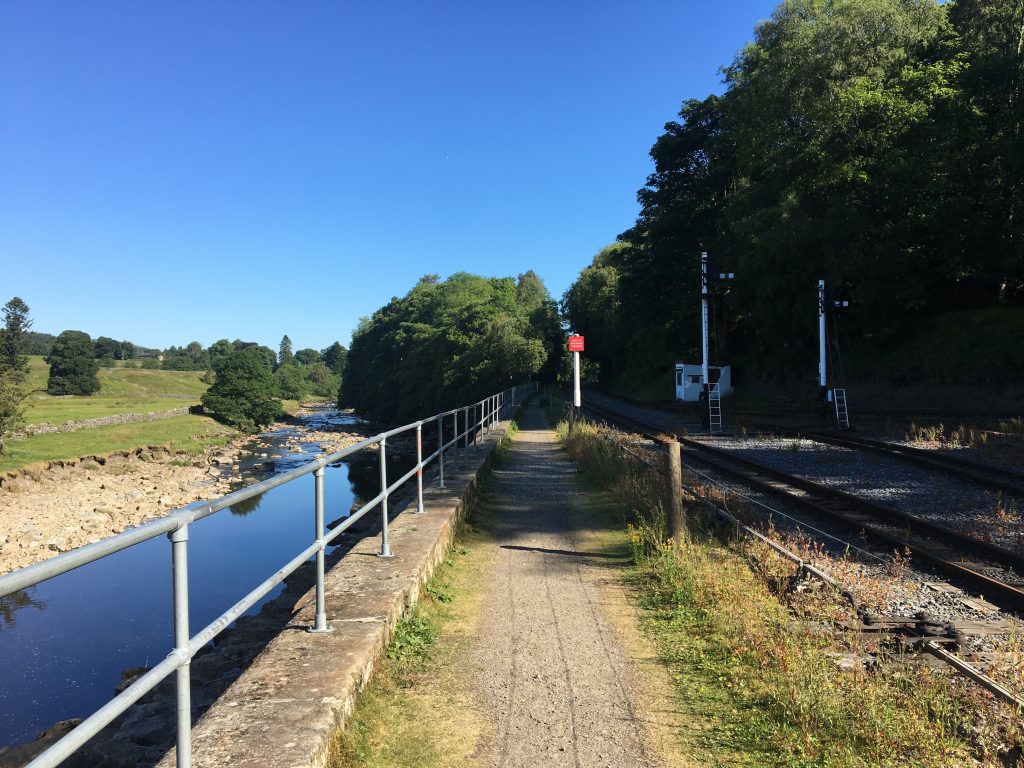 The weather was good, yes, but my last few days had been difficult and so I took an easy alternate path for the first 6 miles of the day and it was the best decision I could have made. The South Tyne Trail follows an old railroad track and runs roughly parallel to the Pennine Way. But where the Pennine Way climbs up and down little hills, traverses farms and is constantly taking you through a series of gates and stiles, the South Tyne Trail is totally flat and straight and stile free. Stile free! Plus, there’s no need to even worry about navigation or looking for the next marker or constantly checking maps to make sure you’re on the right track. It was free and easy walking, the kind where you can just let your mind wander and cruise along easily and happily. 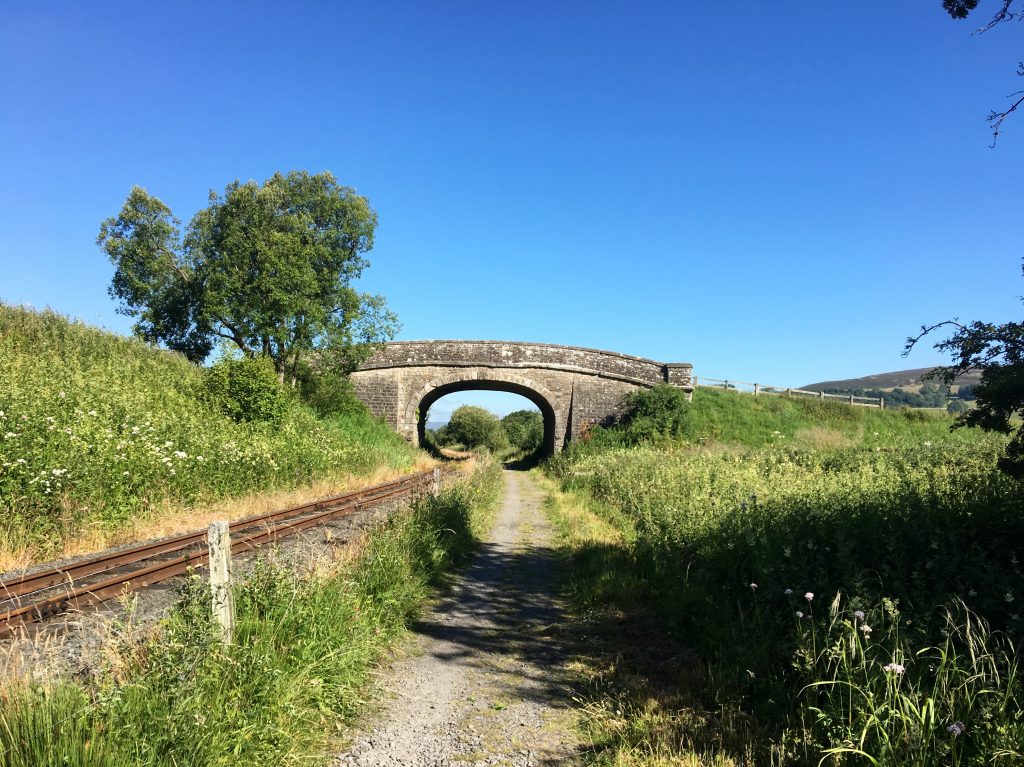 And cruise along I did. I had sort of missed this kind of walking, and I was grateful for the break. Now, purists would probably shun the South Tyne Trail (or at least choose to stick to the Pennine Way) and once, there would have been a time where I would have made that choice. But in my 5 years of long-distance walking, I’ve learned a few things. And one of them is this: if there’s a much easier path that is running parallel to a more difficult (yet official) path, take the easy one. (I feel like there’s a life lesson in here somewhere…) 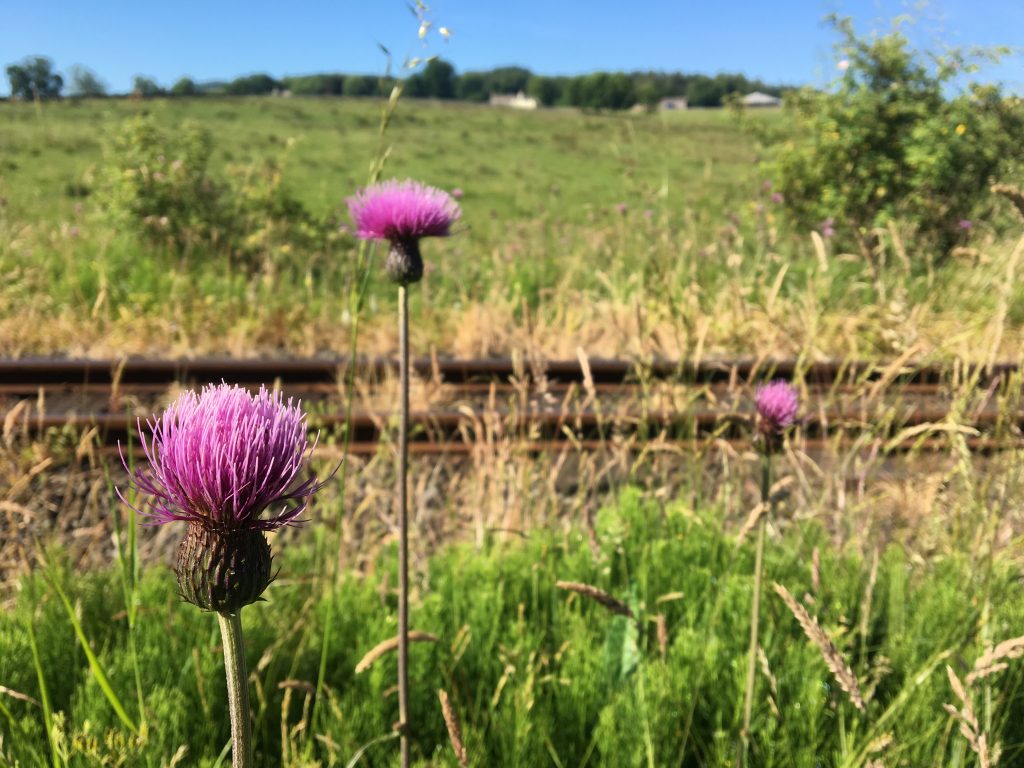 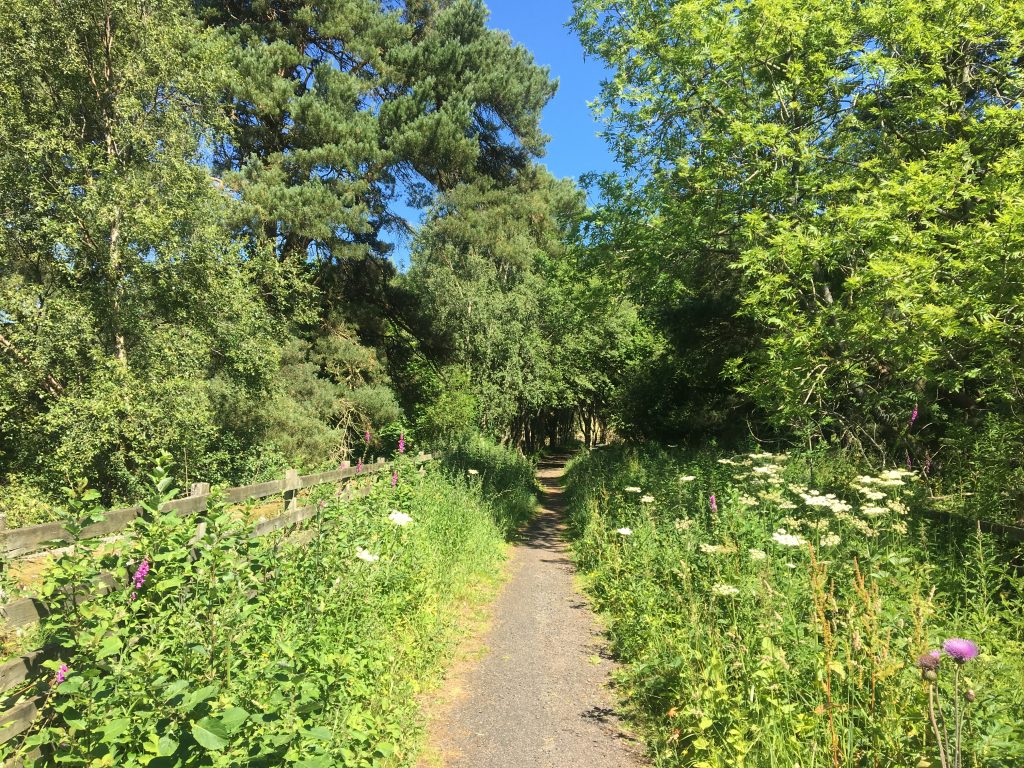 So I walked for about 6-miles on the South Tyne Trail, moving quickly and easily and happily. I took a slight detour to see about a snack or a cup of coffee at the Kirkstyle Inn (well-worth a visit, my guidebook told me) but I came up short and the Inn was closed (I think just for the day, so future Pennine Way walkers should try their luck). I didn’t mind too much- the morning had been easy and I was still full from my breakfast at the B&B in Alston, so I continued on.

I moved away from the South Tyne Trail and back onto the Pennine Way, immediately climbing out of the valley and walking through fields and fells, marsh grass growing high around me. I continued on through farmland, then reached Blenkinsopp Common, the fabled “wettest and boggiest” section of the Pennine Way. My guidebook also told me that navigation would be nearly impossible here, the path disappearing into the grass and heather, but just to look for the fenceline and follow it north. At first I couldn’t even see a fence but I eventually spotted it, far off in the distance. I headed towards it, picking my way through the moors, hoping I wouldn’t sink into a bog. My fears were unfounded; there were no bogs to be had, and the path was mostly dry. 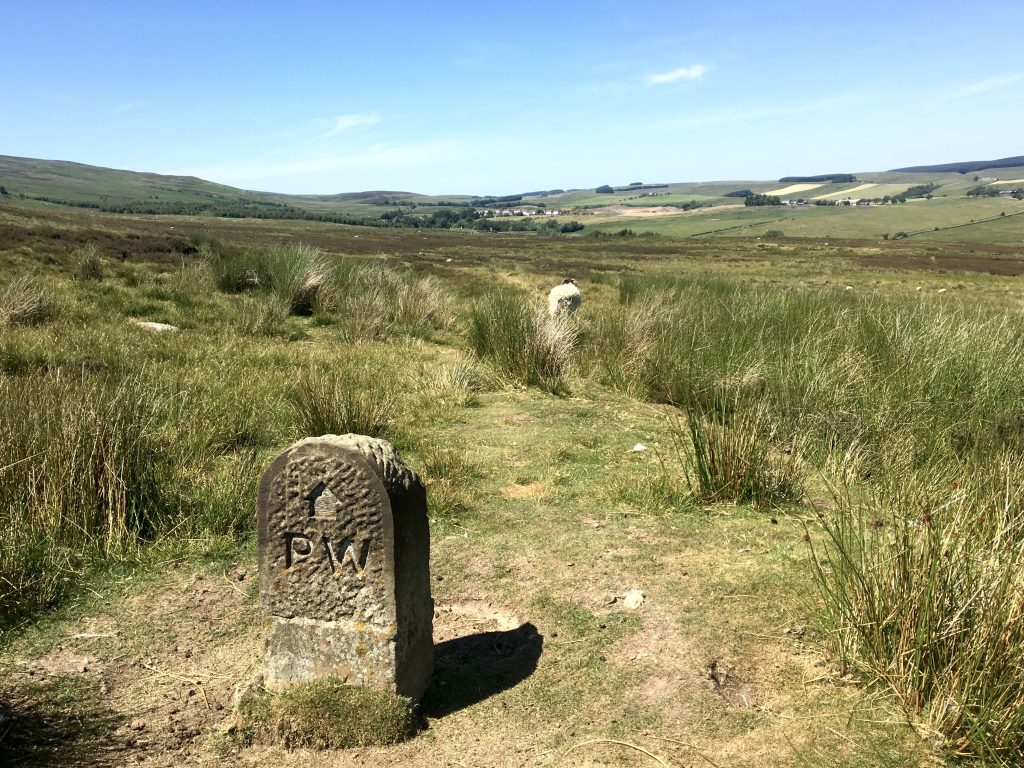 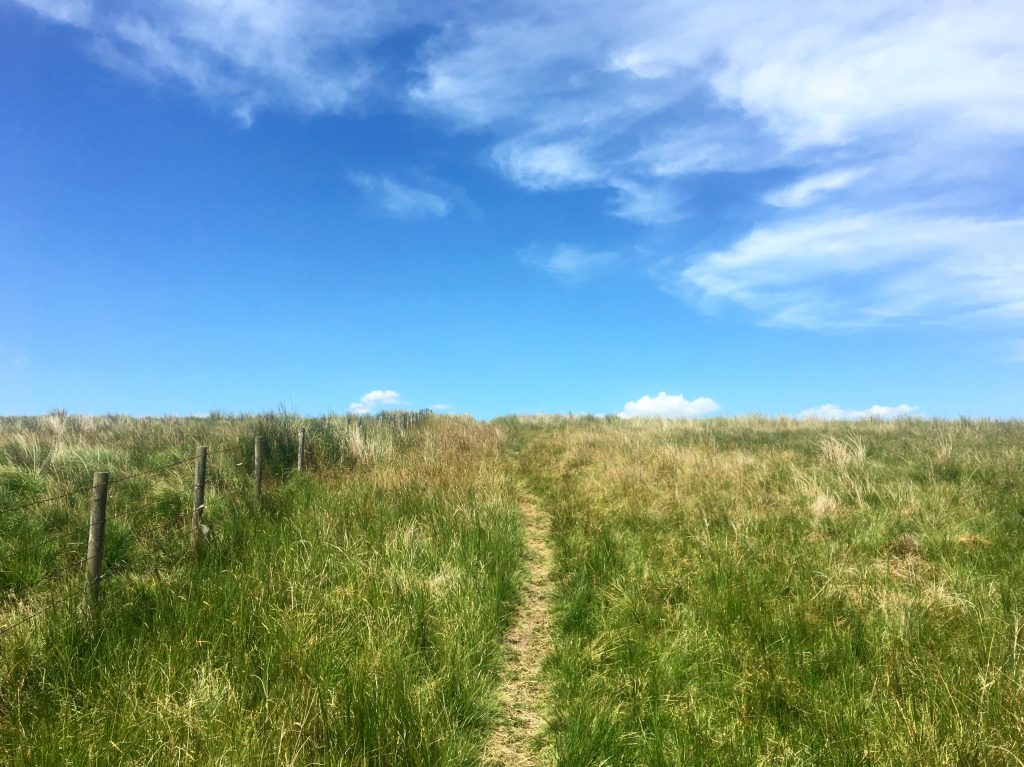 I think the highlight of my afternoon was finding a Pennine Way marker in these fields: my guidebooks says, “Chufty badge for navigation if you find this” and when I did I let out a small cheer. I didn’t cross paths with another walker for the entire day, I was alone with my thoughts and my footsteps for miles and miles and so sometimes, finding a marker in an otherwise endless field of green feels rather exciting. 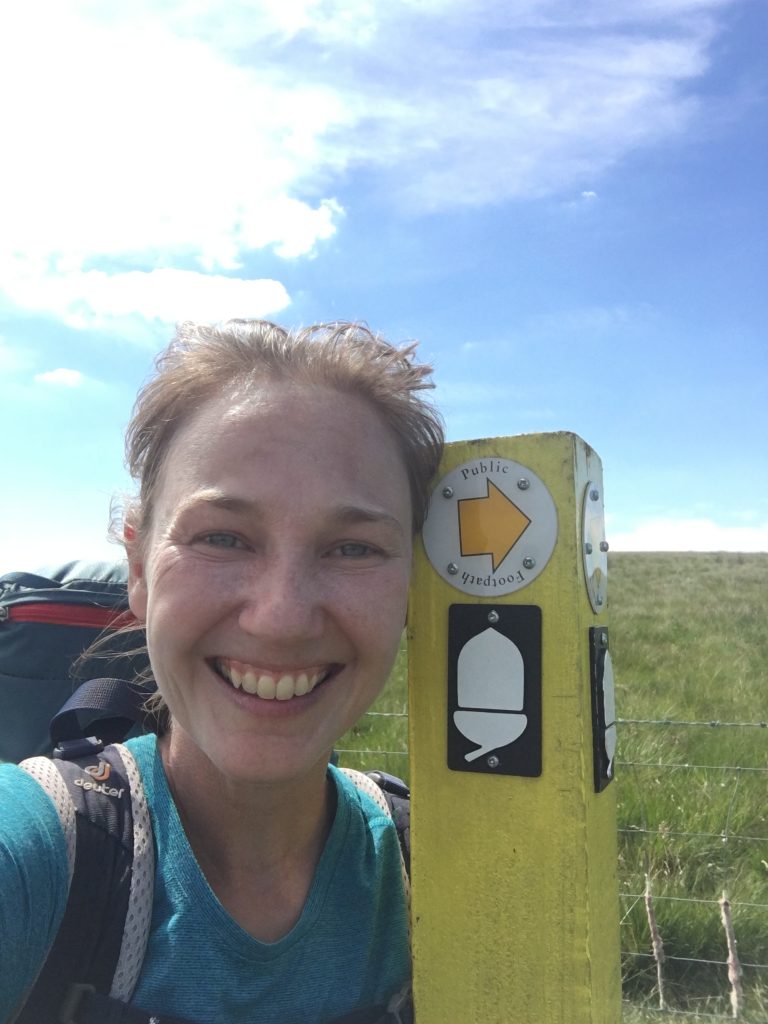 After another few hours I arrived in Greenhead, the Pennine Way having just overlapped with Hadrian’s Wall Path. I was excited about the next day’s walk- I’d get to walk about 7-miles along Hadrian’s Wall (some of the best part!), and ever since I walked the route in the spring of 2017, I’d been eager to go back. 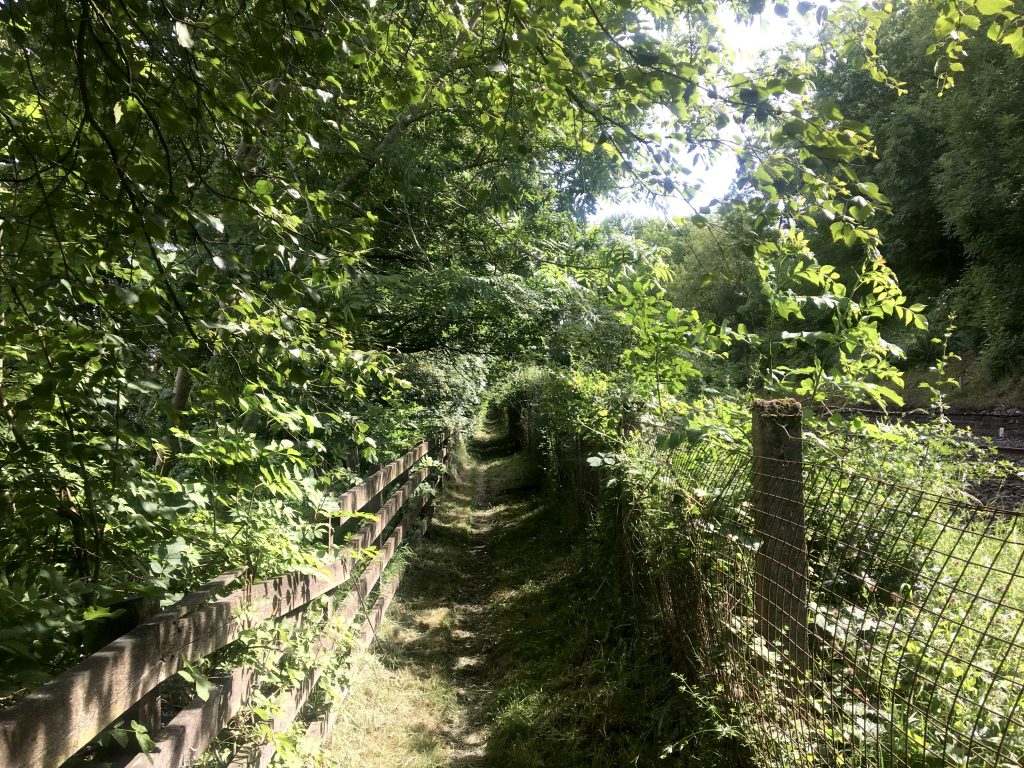 In Greenhead I’d booked a bed at the hostel, which is in a converted Methodist chapel, and as usual I had the room all to myself. Just as I was thinking that my Pennine Way had turned into a very solo trip (despite having made several friends within the first few days), I ran into the Dutchman- Luke (or Luuk?)- at dinner! The Greenhead Hotel was just about the only place around for food, and there were a few other walkers there as well. Luke and I ate together and talked about our experiences along the way, and it felt really good to be able to share my experience with someone else. It felt like a long time since I’d said goodbye to David back in Horton-in-Ribblesdale, and while I’d had some nice encounters with locals, I hadn’t really met or talked to another walker like me. I’d resigned myself to a very solo and isolated walk until the end, so having that meal with Luke was an unexpected treat. We talked about the next day’s stage and he told me he was breaking what I would be doing in one day into two, so I knew that I wouldn’t see him again. But this is something I love so much about these long-distance walks: the chance to have a drink or a meal with a stranger who quickly turns into a friend, for the shared camaraderie, the understanding, the ease of it all.

Then back to my bunk in the hostel, under the covers, a chapter of Jane Eyre and then lights out, already dreaming about the next day’s walk along Hadrian’s Wall.