My second day on the Pennine Way, compared to the first, was glorious. And oh man, did I need it! 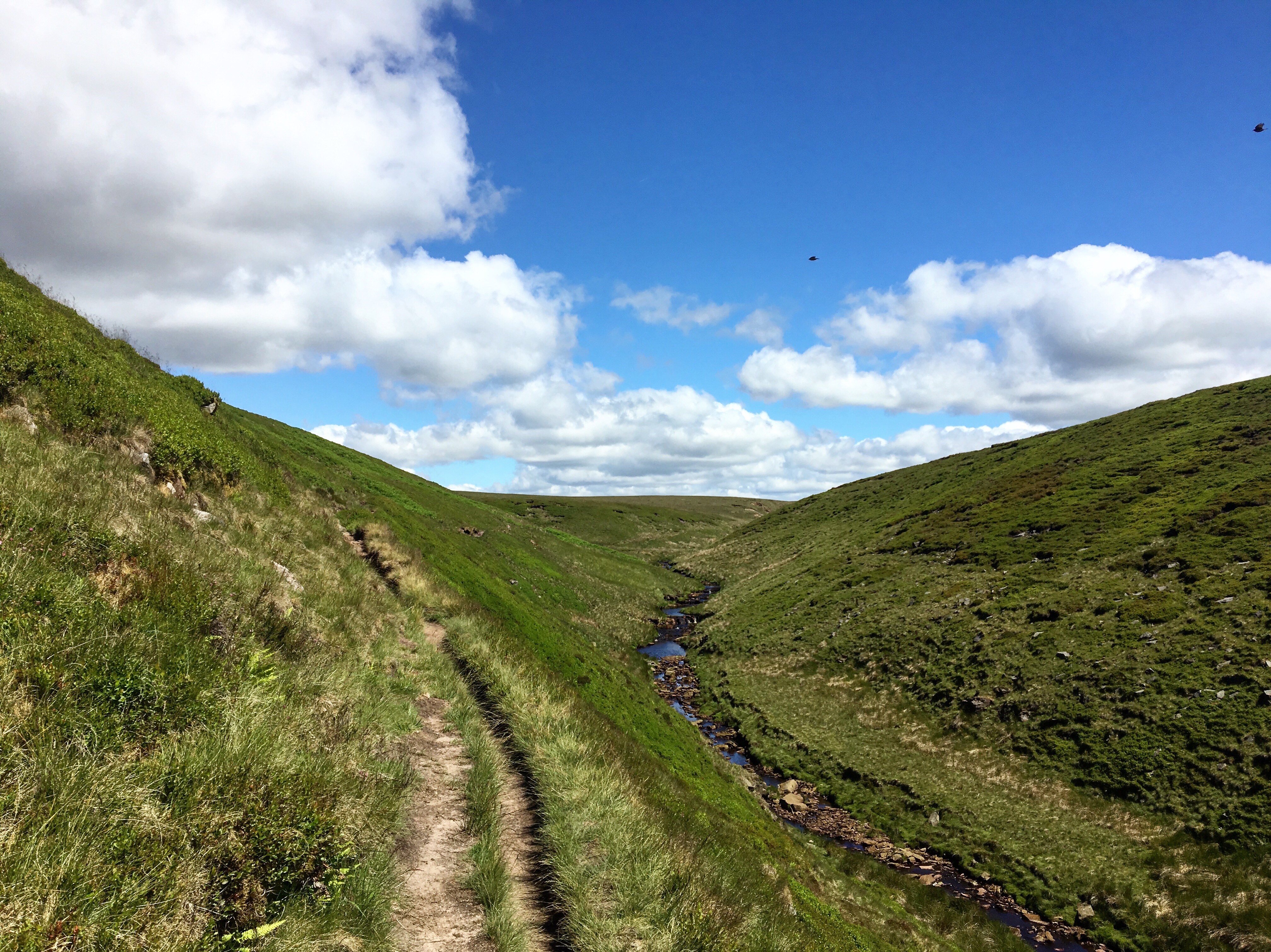 The sun was shining brightly and the report at breakfast was that the weather should be clear for the next week, at least. And breakfast, for the record, was also glorious: my first full English of the trip. A bowl of cereal, two sausage links, scrambled eggs, a thick slice of ham, tomatoes and mushrooms and baked beans and toast and juice and coffee. It was delicious and also too much but I ate as much as I could and then ordered a packed lunch to carry with me.

Sitting at the next table was Margaret, also from California, and she told me how she had also gotten lost the day before, by walking along Kinder River. “Those footprints you saw were probably mine!” she said. It never occurred to me that I might have been following someone who had also gotten lost.

Margaret was staying two nights in The Old House B&B, and taking advantage of their transport service, so she had already walked the second day and would be driven to a point about 15 miles further on. She told me and David about a shortcut around one of the reservoirs, and our B&B host confirmed it, and I was careful to make a note in my guidebook. We were directed to the best way to get back to the path from the B&B, and so I hoisted my pack and set off across the neighboring field.

Within just five minutes, I was walking back to the B&B to ask for clarification. I’d been wandering around the field rather aimlessly and feeling kind of silly and honestly, I think I had lost a little confidence the day before, when I’d made several big navigational mistakes. My B&B host once again pointed me in the right direction, and finally I was on my way. 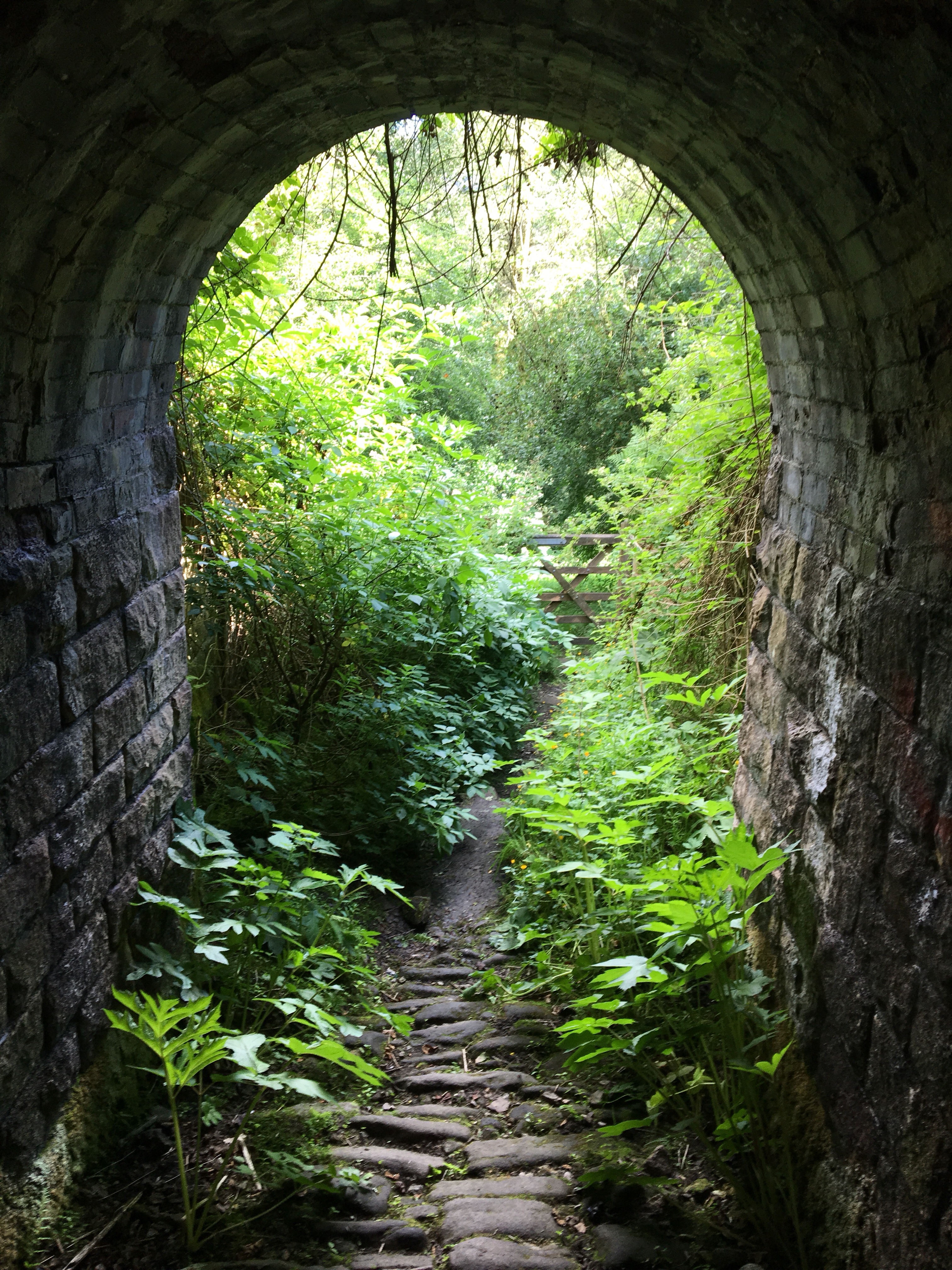 The day’s walk was just beautiful. There were some challenging sections, mostly in the first four miles which climbed and climbed up to Black Hill, but even that part wasn’t so bad. The sky was clear blue with huge fluffy clouds and for awhile there were sheep at every turn. I hadn’t yet grown used to the sheep (spoiler: I would pass hundreds and hundreds of sheep nearly every day of the walk), and it was so amusing to approach and see how close I could get before they would spook and run a few feet away. 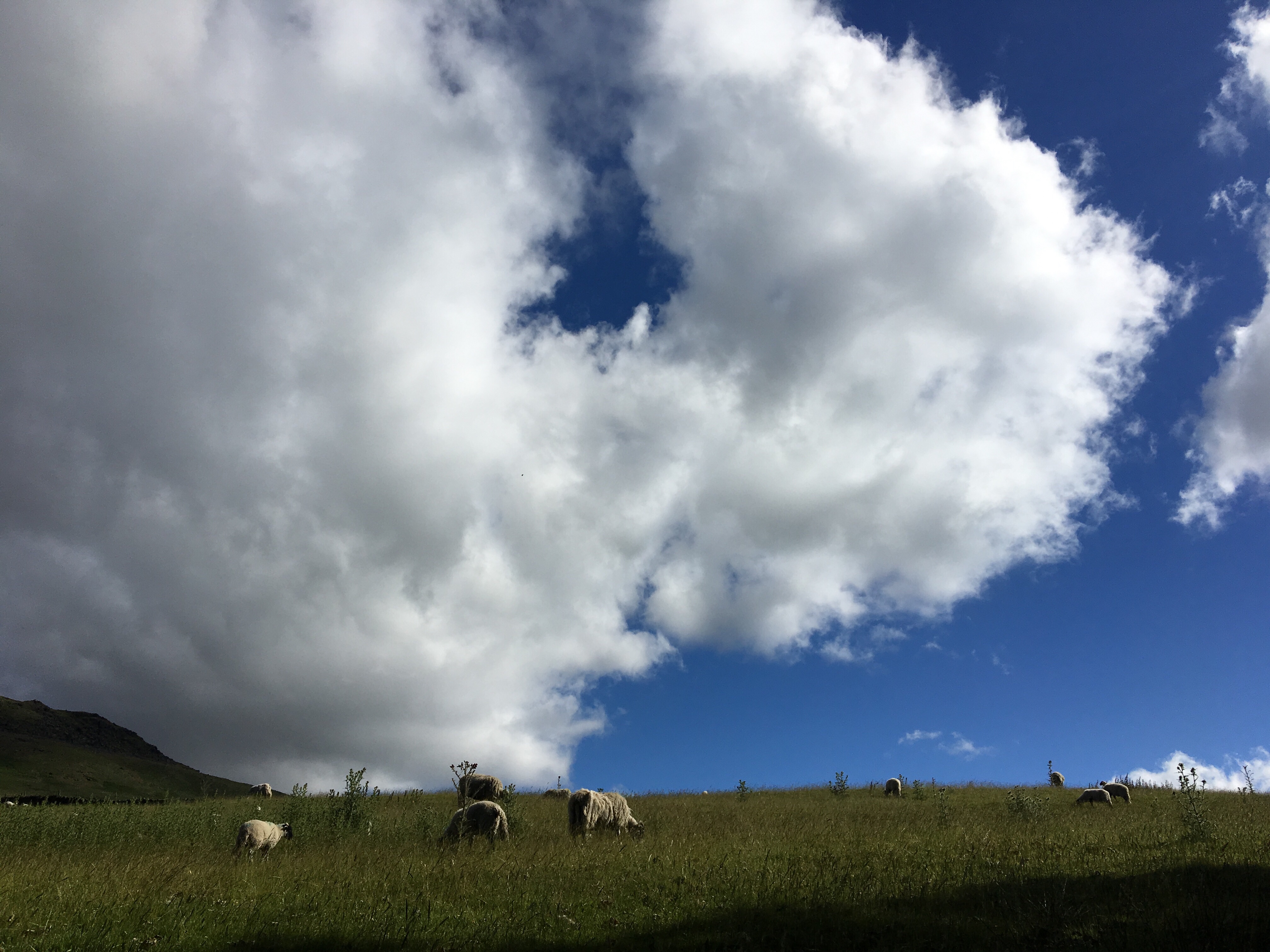 And as I climbed up towards Laddow Rocks I was totally alone, and the views stretched out behind me, wide and vast. My legs, despite the strain of the day before, felt good, and I was happy and energized and excited for what was ahead. 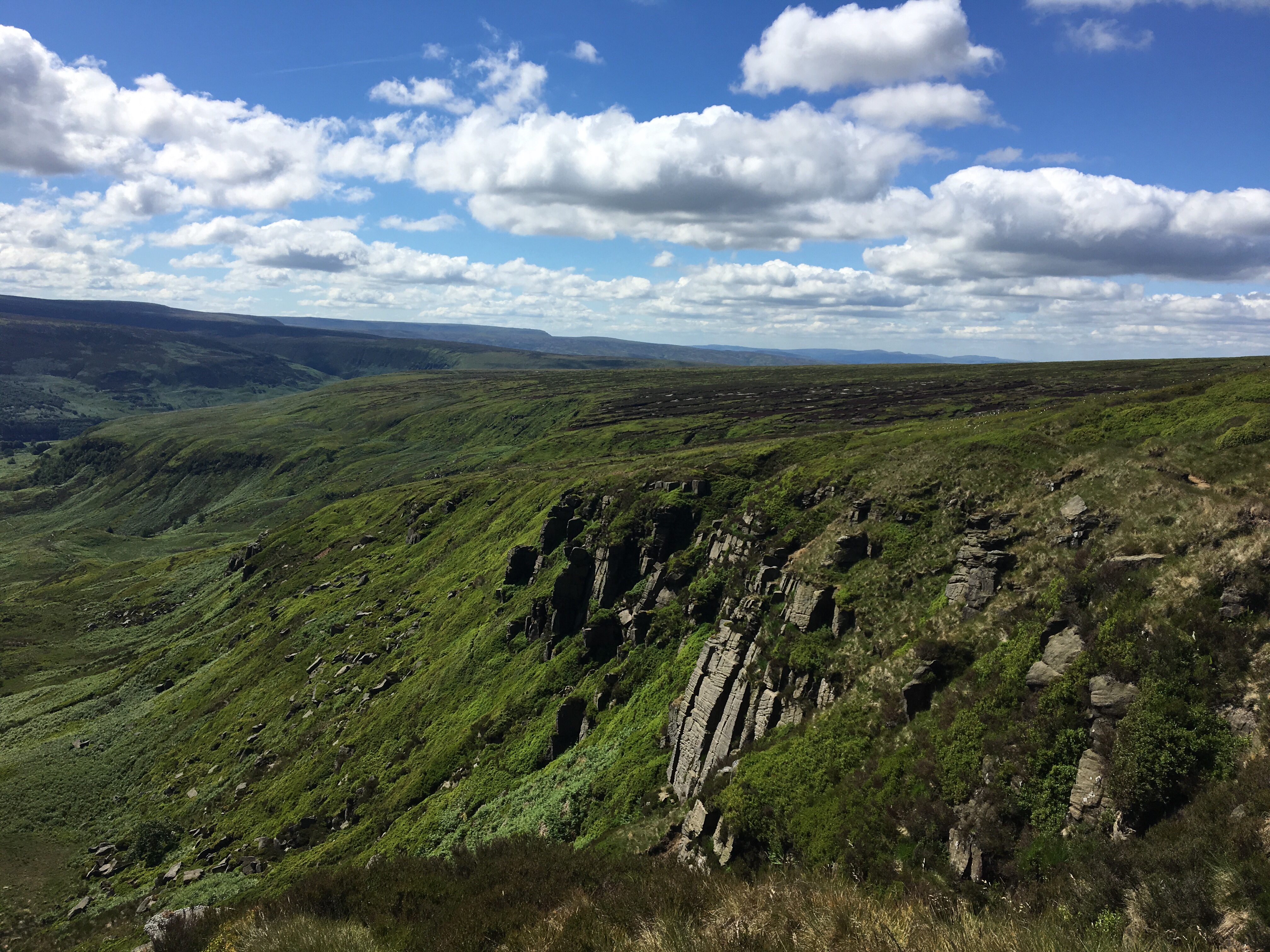 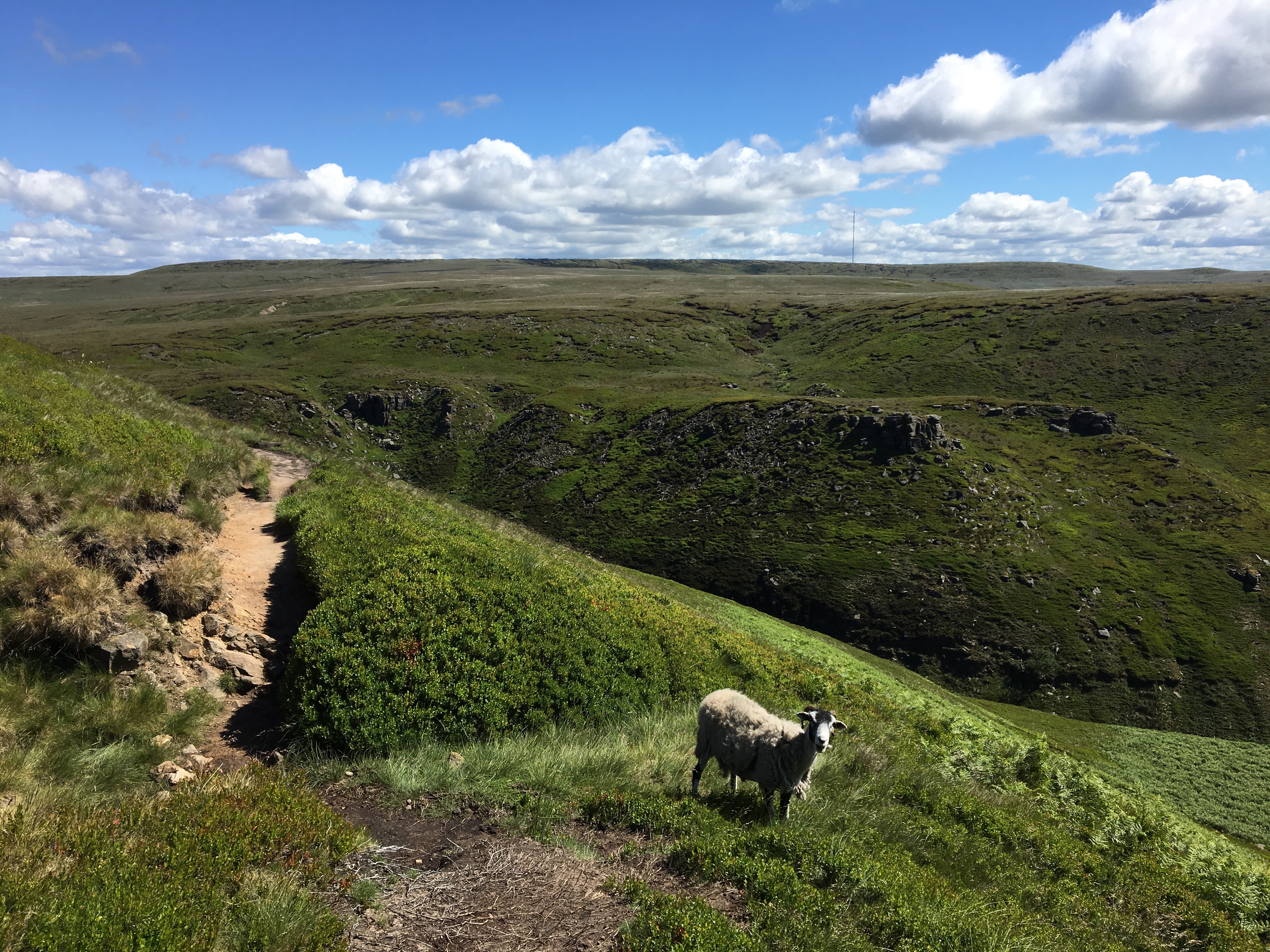 One of the most beautiful moments of the day (and maybe of the entire trip) was when I turned off the road towards Wessenden Head Reservoir. There was a great slope of green hill that stretched down from the top of the path, and sitting at the top of the hill was an older woman on a wooden kitchen chair. Darting and racing all around the field in front of her were at least a dozen dogs, maybe more. They were all shapes and sizes and colors, and there were two women amongst them, who seemed to be their handlers. I still haven’t figure out what, exactly, they were doing or where they were from: one of the women would occasionally throw a ball and the dogs were run after it, or sometimes when one might begin to stray too far the other woman would call him back. I watched the dogs for a few minutes and then the woman in the chair began to talk to me. She told me that she had very recently found out that she had cancer, and by some coincidence she had discovered these women with the dogs on Facebook, and they invited her out to this hillside.

She sat there, with a blanket wrapped tightly around her legs, the sun on her face and a dozen dogs racing at her feet. “I think this must be some version of heaven,” she said. 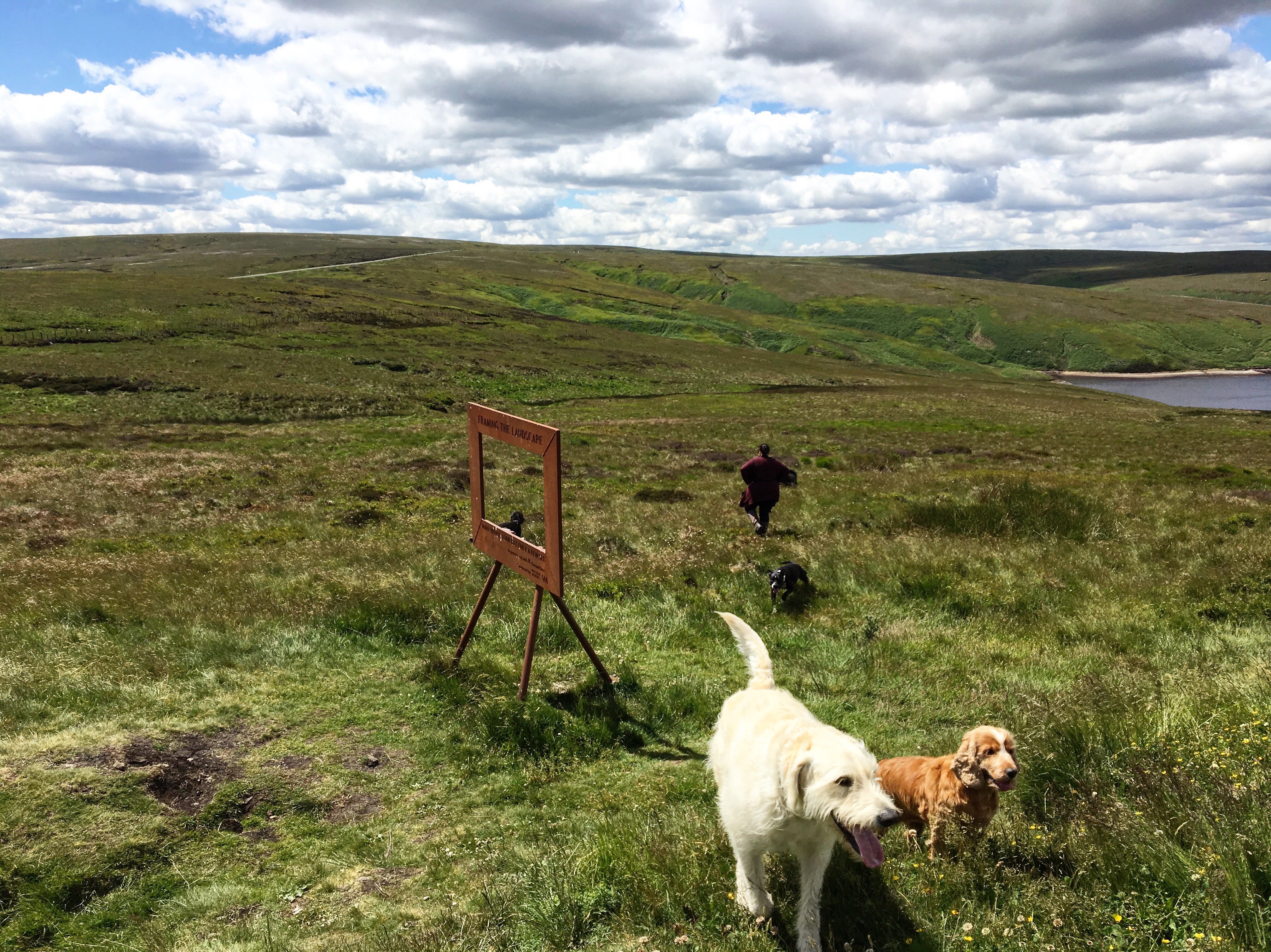 A little further down the path- after I ate my sandwich on a rock in the sunshine- I attempted the shortcut that our B&B hosts and Margaret had told me about. I studied my map, I made a left at the end of a reservoir, I followed the path and I had no idea what went wrong! I reached what I thought was the end of the path and I couldn’t figure out a way to go forward, so I gave up and retraced my steps (it was around this point that I began wondering just how many miles I was adding on to this whole Pennine Way thing). Just when I got back to where I had attempted the shortcut, I ran into Nigel and Judy, the friendly couple who had shared a taxi with me on the way to Edale. 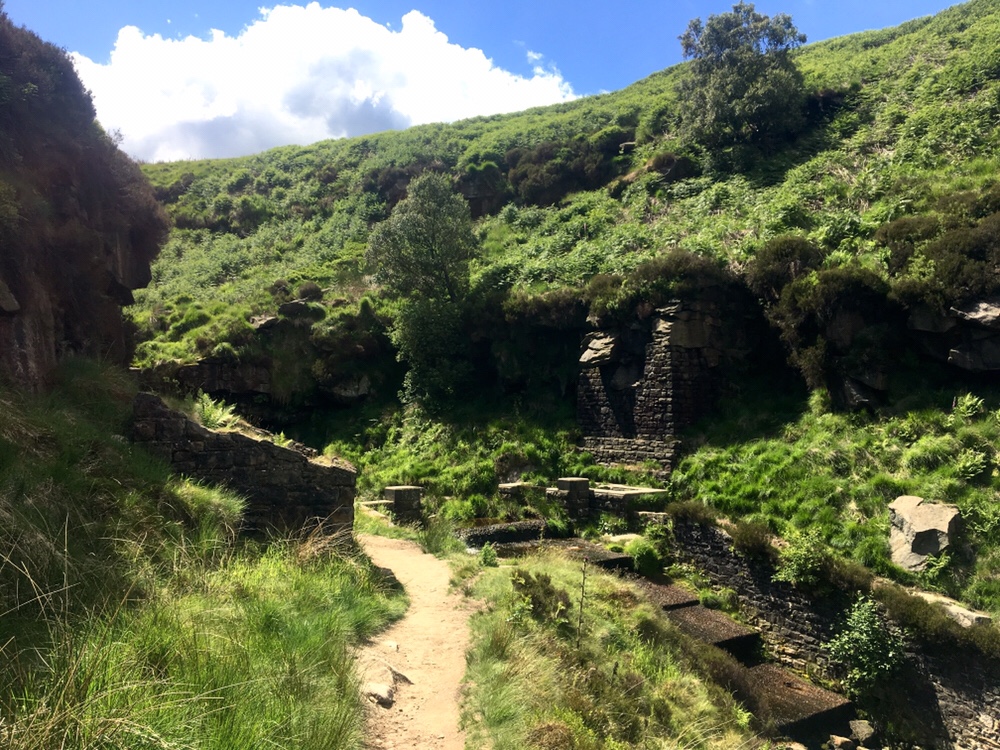 We ended up walking together or close to each other for the last few miles of the day, and despite my failure with the first shortcut, we ended up taking another when a very friendly local man explained the best way to get to our lodgings in Standedge. This time- finally- I figured out the right path. 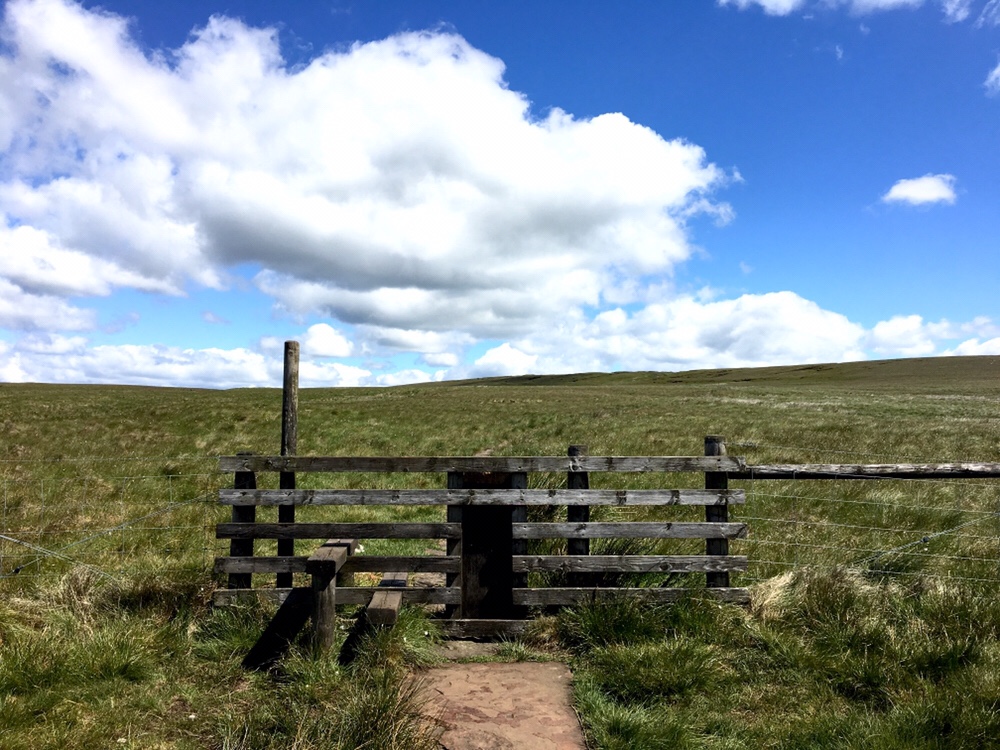 My lodging for the night was a campsite around the back of The Carriage House in Standedge. I’d brought my tent and some camping supplies with me because there were a couple nights along the way where I couldn’t find a bed in a B&B or a hostel or bunkhouse. I also figured that if my plans needed to change or I ran into any trouble, having a tent with me would allow for some extra insurance.

But camping is still a relatively new thing for me; I’ve been car camping only a couple of times, and really, the only thing that gave me any sort of confidence to attempt camping along the Pennine Way was the three nights I spent in my tent on Cumberland Island several years before.

Before I left for my trip, I meant to practice setting up my tent- and I did, just one time. But when I unfurled everything from my pack on the grassy lawn of The Carriage House, the material looked alien and the color coded tabs indecipherable. I flipped the tent and the footprint and the rain cover around a few times and weaved the poles together and clipped things here and there and, eventually, I had something that looked like a standing tent. I realized that I could have used one more stake, and I wasn’t sure if I’d used the stakes that I did have in the correct way; with the first strong gust of wind, I worried that the tent was going to be flapping around too much. 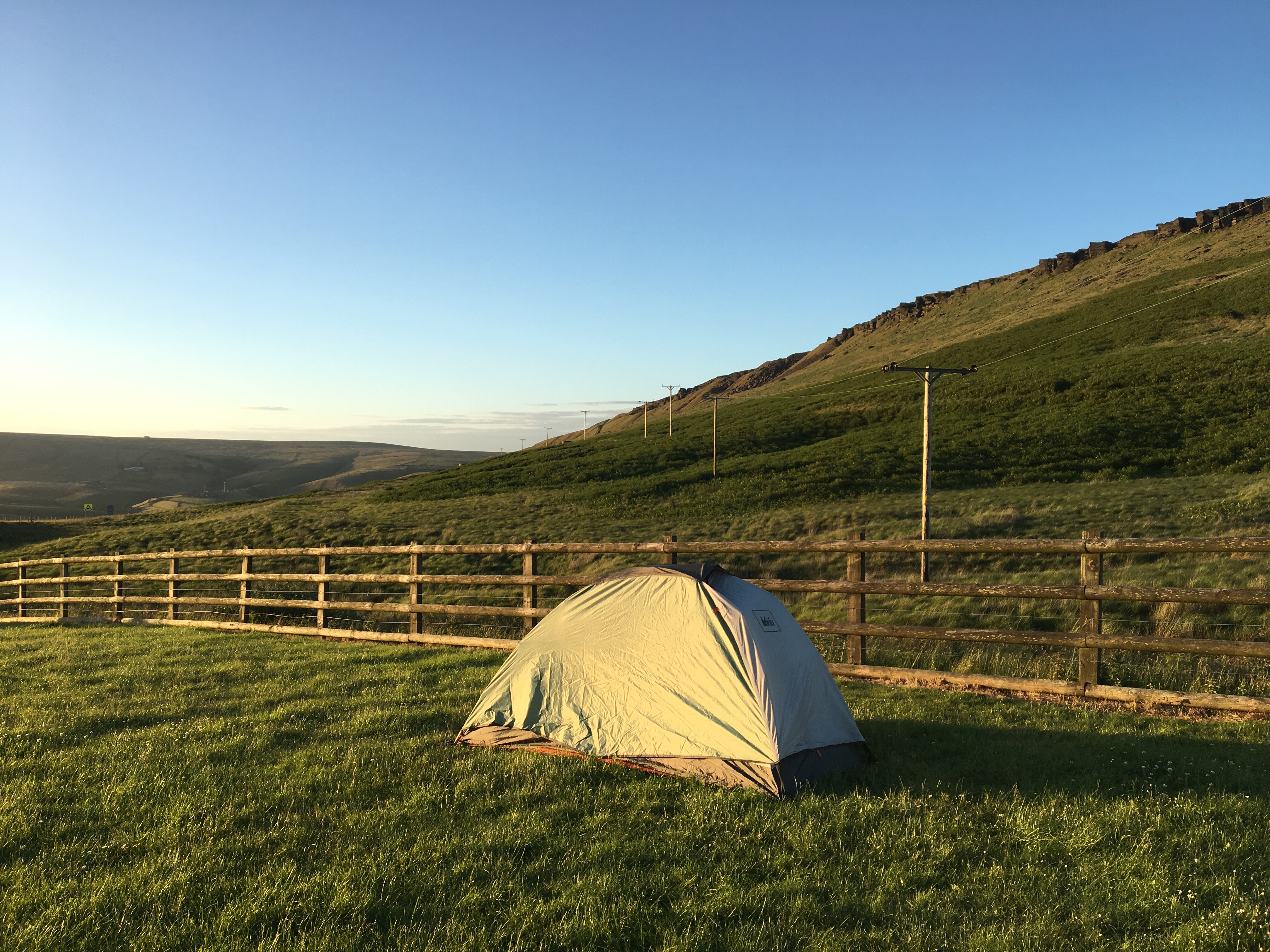 I stood back, with my hands on my hips, and surveyed my work. Good enough. I walked around the side of The Carriage House to find the shower blocks so I could clean up, and then I went inside for a glass of wine. Later, I met up with David and we ate dinner together, and then around 9pm I somewhat reluctantly went outside to see about sleeping in the tent. Once the sun went down the temperatures dropped and I put on every layer of clothing I had in my pack and tucked myself deep in my sleeping bag. But I was cold, and stayed cold all through the night- tossing and turning and trying my hardest to sleep. I think I finally got comfortable around 5am once the sun started to rise and the tent began to warm back up. A little late for a good night’s sleep, but it was enough. Mostly, I was relieved that my first night of camping was over, and I let my tent out in the sun so the dew could dry while I went inside and had another full English breakfast. 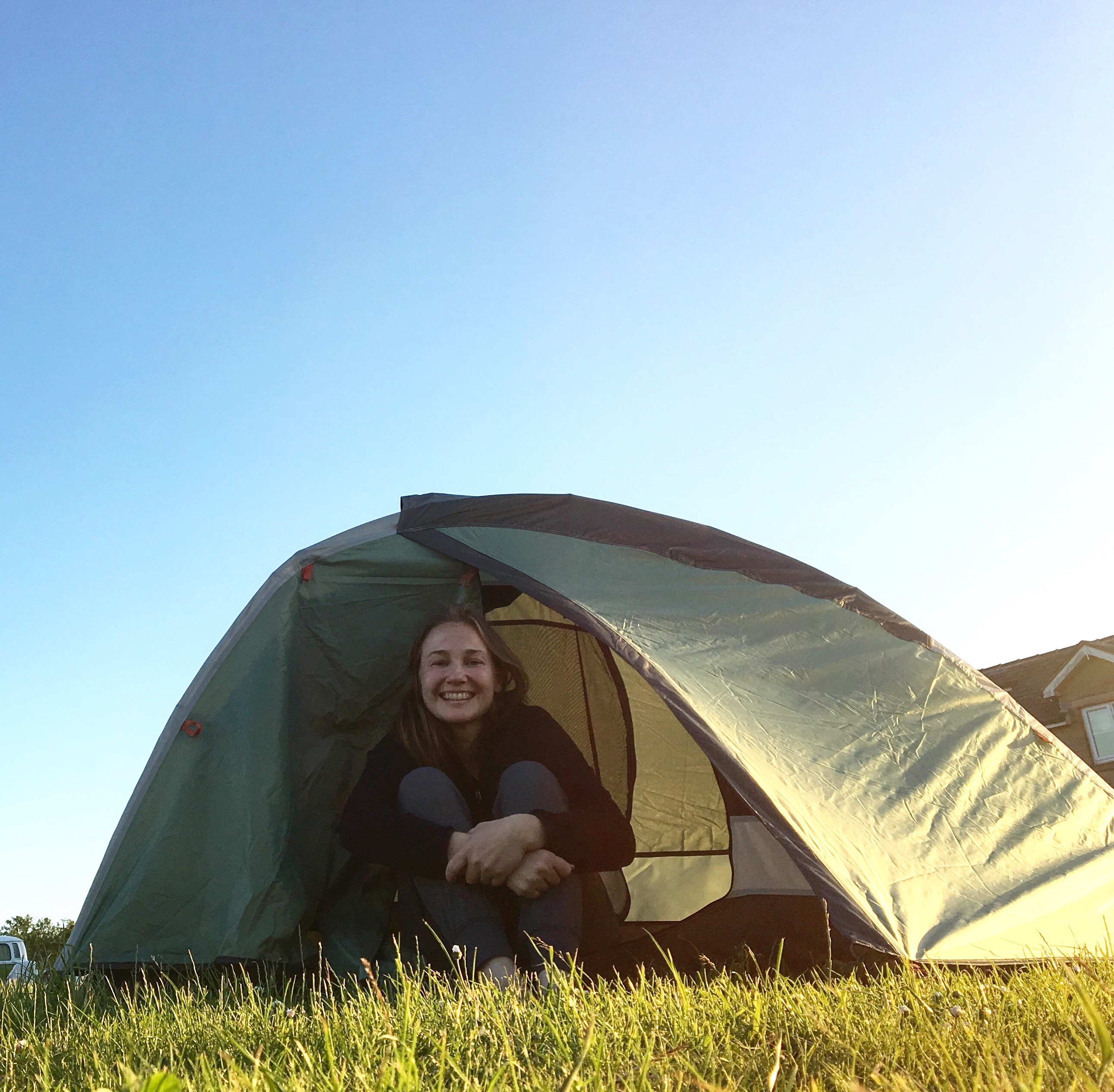