I woke up at 4:30am, and then again at 5:30am. The sun was shining bright in the sky and it felt impossible to fall back to sleep. I was alone in my bunk room and the air was cool outside the open window, and when I looked out I could see clouds in the distance.

I put on my hiking outfit and rolled up my sleeping bag and began to remember how to arrange my backpack. I was moving slowly. Breakfast was a coffee sachet and a banana and a granola bar, and by 7:00 I was dressed and packed and ready to start my long walk. 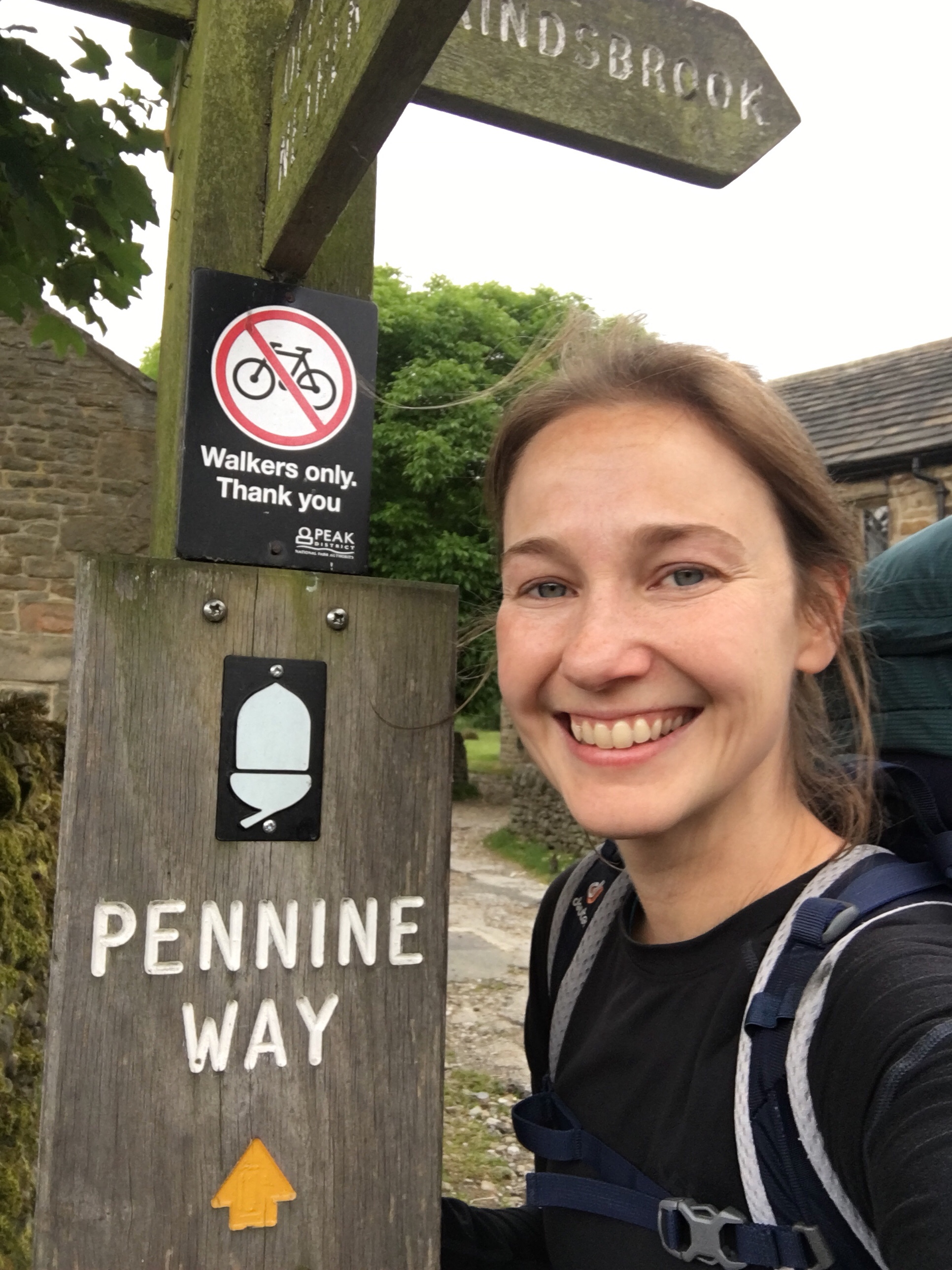 The Pennine Way starts in the small village of Edale, a 45-minute drive east from Manchester, and the track immediately heads into farmland and open countryside. As I was halfway up the first (very) small hill I began to breathe heavily and it felt as though I was being pulled backwards, as though there were two hands on my backpack gently tugging, and tugging. My pack was heavy, heavier than anything I’d walked with ever before. Only 15 minutes into the walk, I began to worry that because of the weight I was carrying (a weight that included camping supplies), this walk might be a bit of a challenge. 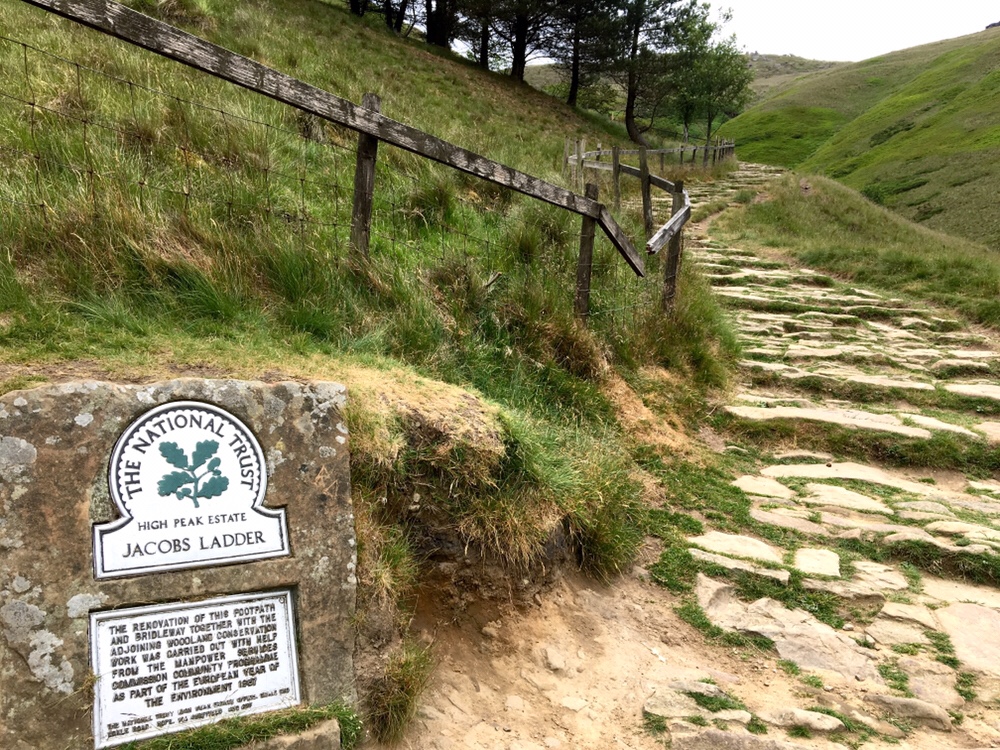 And the first real challenge of the day was Jacob’s Ladder, a series of steep steps that climb and climb and climb, dropping you off at Edale Rocks. Step by step, inch by inch, I made it to the top and as soon as I did I felt my first raindrop. And then more, and more, so I took off my pack and pulled out my raincoat and then kept walking. The rain, at first, didn’t seem so bad, but within minutes I was walking through thick clouds, rain pelting me from every angle, the wind blowing fiercely so that no part of me was left dry. My hiking pants quickly became wet and cold against my legs and I was only an hour into the day’s walk. I found the best cover I could, and I huddled under the overhang of a rock and took off my pants and changed into my long underwear and rain pants, much like I did that time when I walked Hadrian’s Wall. “Already prancing around the Pennine Way in my underwear”, I thought. 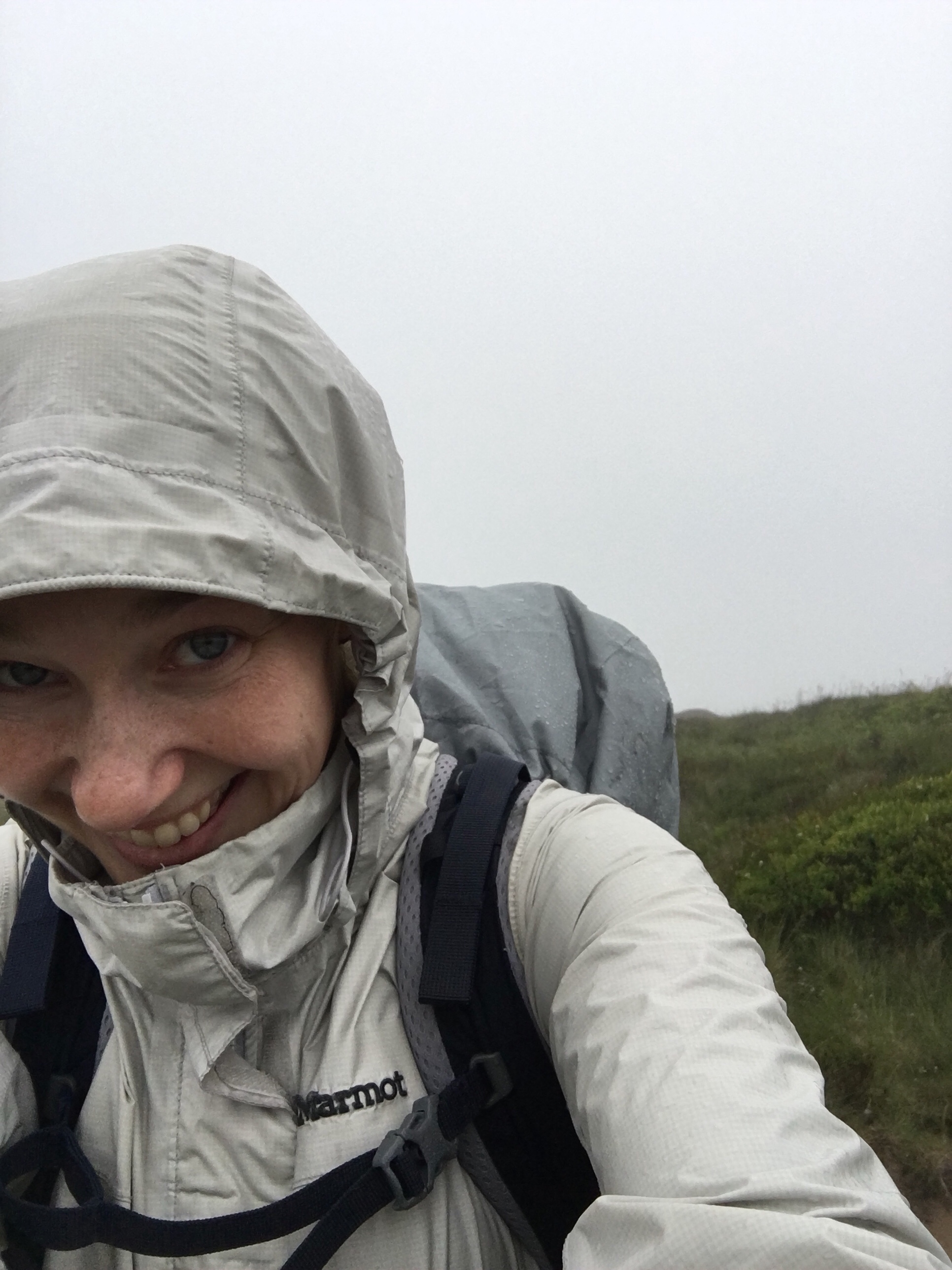 My guidebook says this about the first day: “The Pennine Way throws you straight in at the deep end. If the weather is poor, it may also test your navigation and equipment as you skirt around the notorious Kinder Scout and ascend the remote summit of Bleaklow.”

Ahh, truer words were never spoken! The Pennine Way certainly did test my navigation skills (or lack thereof) on that first day; as I crossed Kinder Scout and made my way across what felt like the ridge of a mountain (though honestly I had no idea because I couldn’t see a thing), I focused so carefully on the faint path at my feet. The trail wound in and out of large rocks and sometimes it was really difficult to tell where I needed to go. Visibility was also extremely poor, but for awhile I managed to follow the path. 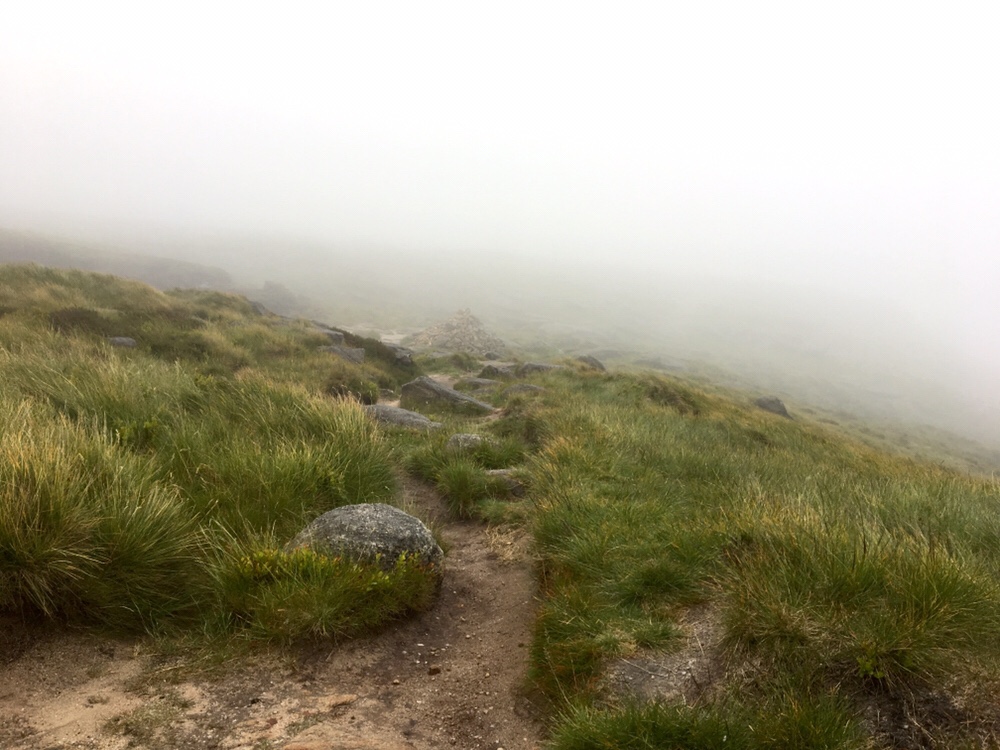 Here might be a good time to say something about the signage on the Pennine Way: well, there could be more of it. There were many, many times along the trail where it seemed as though the path divided and there was no clear indication of which way to go. I quickly learned that I needed to follow my guidebook closely, and by doing so I always figured out the way. But on that first day, when it started raining, I hadn’t wanted to take off my pack and dig through and get everything wet looking for my guide, so I foolishly thought I could just follow the path without much trouble.

Well, the first trouble came at Kinder Downfall. I was suppose to cross over the river which is mostly dry unless there’s been really heavy rain, and it involved a rather sharp left turn. It had been a long time since I’d checked my guidebook and I was oblivious to the fact that I needed to cross a river or make a left, and I assumed that a signpost would indicate where I needed to go. The other complicating factor was that I just couldn’t see a thing. There should have been sweeping views, and a rocky cliff face, and I should have been able to see a path on the other side of the river bed. Instead, all I could see was the trace of a path at my feet, and I just continued to follow it straight on. 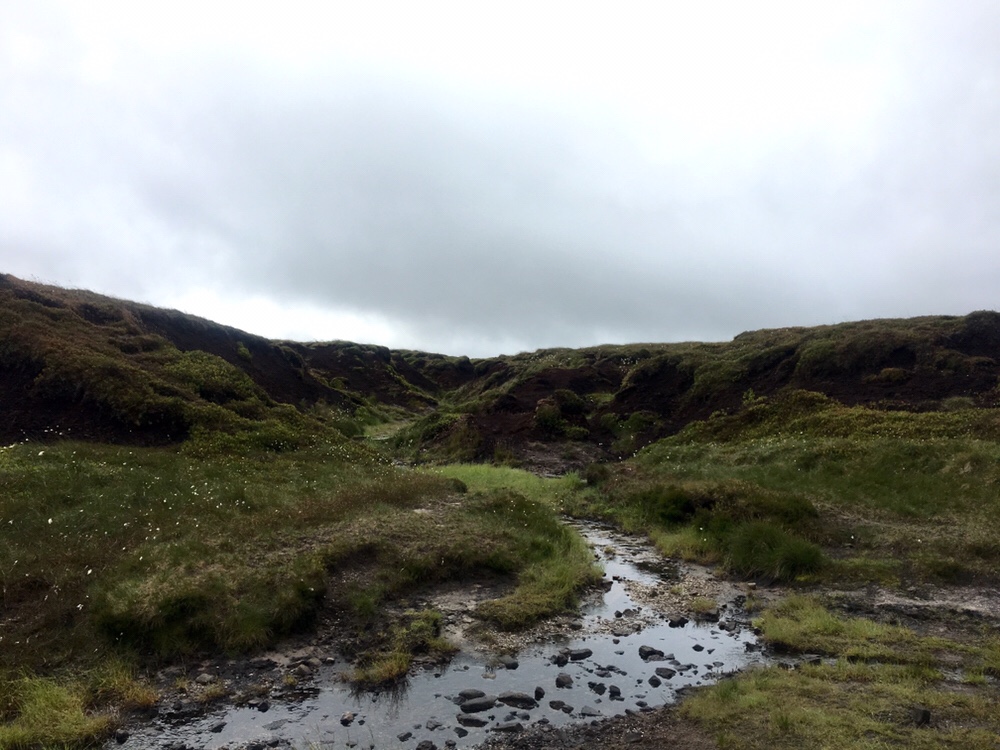 Straight and straight and straight, along a mostly dry river bed. For a long time I didn’t even question whether I was still on the Pennine Way or not; I was on a path, there were footprints in the mud which meant that others had come before me, and there were even a few cairns- those large pile of rocks which, to me, mean that I’m on the right path.

How long did I walk? A mile? Two? Eventually, the path faded into obscurity, and suddenly there were half a dozen different directions I could walk in. I tried a few of them, I tried to see a way forward, I turned around and around looking for something, for someone, but there was nothing. 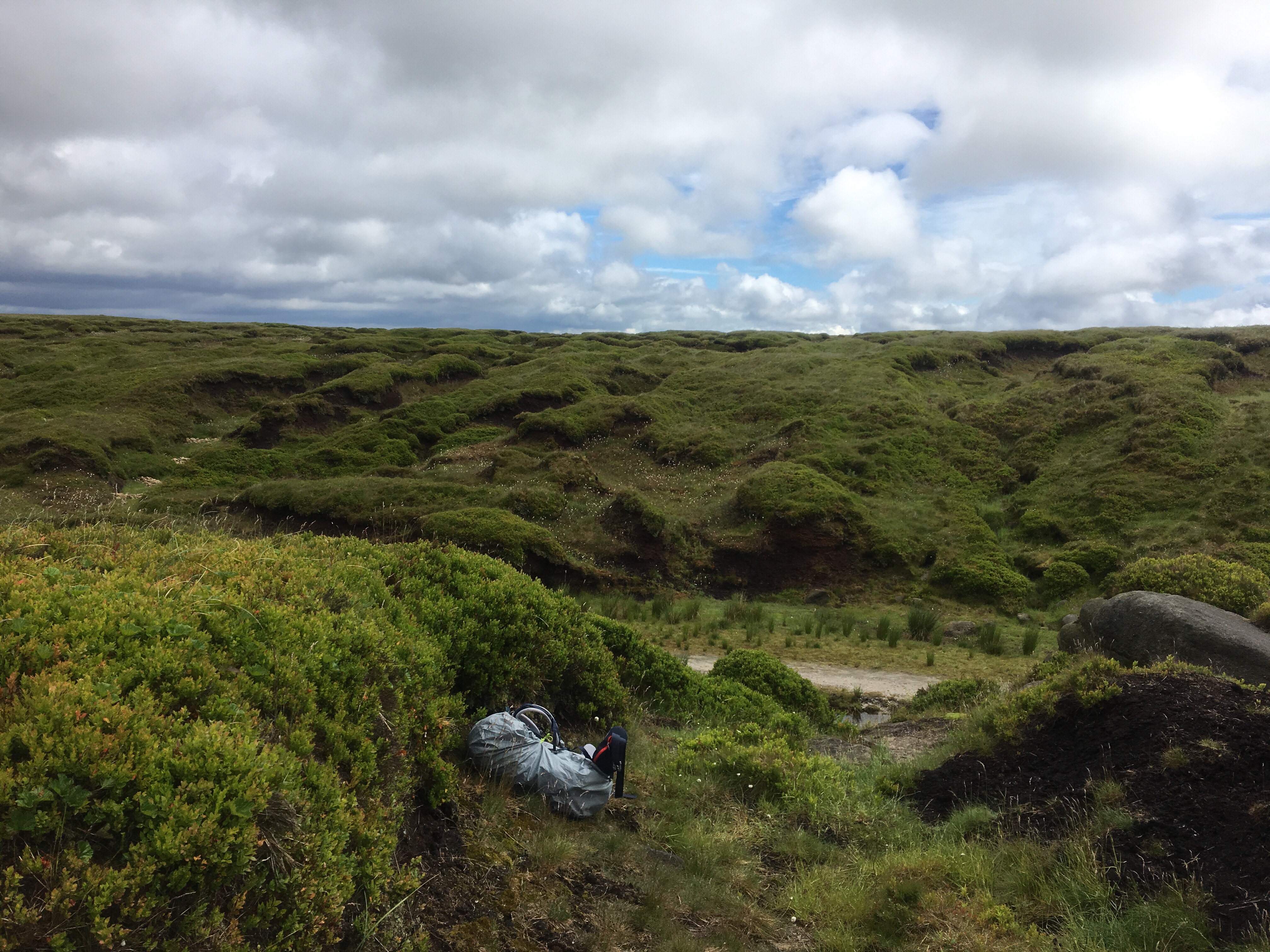 So I turned around, because it was all I could do. I knew that if I retraced my steps I would eventually get back to what I knew was the Pennine Way, and so I walked back, for one mile or maybe even two, and I found a cairn that I knew was on the path and I took out my guidebook and luckily there was a break in the rain and I sat and I thought and I thought. I noticed that I needed to cross the river, but with visibility still being so poor, I couldn’t quite figure out where I was supposed to go.

And then, emerging from the fog and the mist, was a man wearing a black raincoat. I could see him in the distance, slowly moving closer, and I sat and waited until he was nearly upon me and then I said, “Are you on the Pennine Way?”

His name was David, from LA by way of Liverpool, and he took out his own guide and we studied the maps and together figured out where we needed to turn. By even more great luck there were two men coming from the other direction and they were able to point out the path to us. I chatted to David for a few minutes and then I continue on ahead of him, grateful and happy that I was finally back on the way.

And then, before long, I made my second mistake of the day. This one was just plan stupidity and lack of focus; I was tired and wet and worried that the path was much more difficult to navigate than I’d expected, and I turned too soon and headed down a very steep, very large hill, so confident that I was going the right way until suddenly it was clear that I wasn’t. I turned around, I looked up and up at what I would have to climb. This was actually one of the hardest moments of my entire walk- that feeling of knowing you’ve already walked so long and so far, of feeling wet and cold, of knowing you still have so far to go, and then looking at this really steep hill and knowing that you need to retrace some very difficult steps. 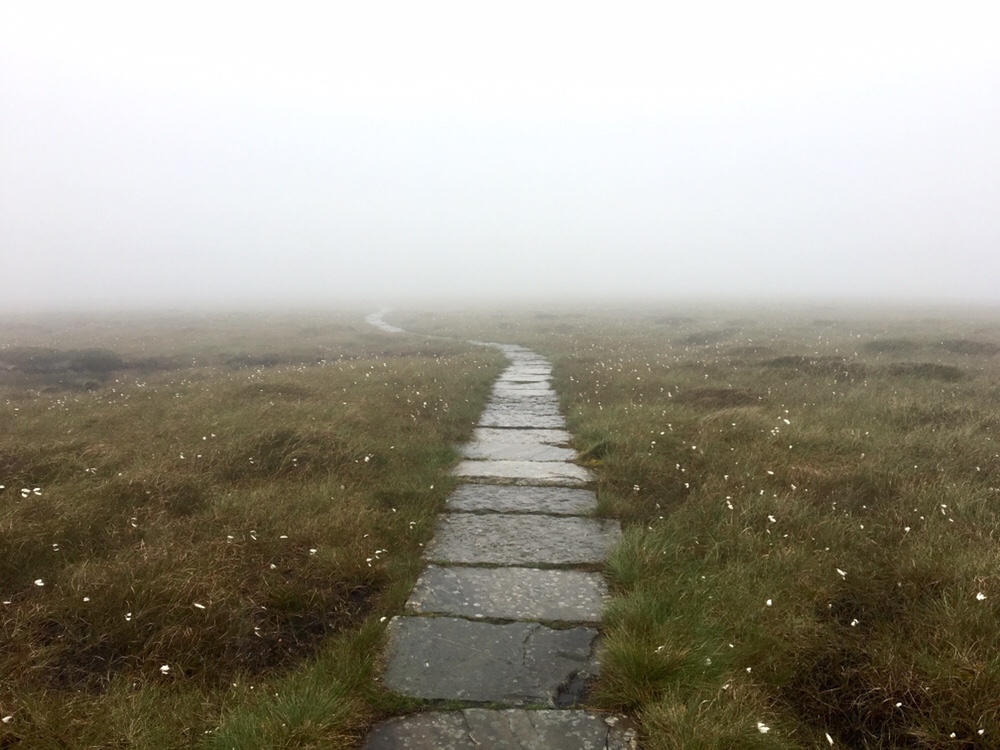 One by one, I did it. I got back to the top and ate half my sandwich and changed my socks and then kept walking. The rain started again, and then didn’t stop for the next two or three hours. Wet and cold, wet and cold, I rummaged through my pack until I found my buff and I wrapped my numbed fingers in it like a muff, as best as I could.

The last few miles of the day followed Clough’s Edge, a high and narrow path through ferns, before a very steep descent down to Torside. The entire time I was so worried that I was on the wrong path, because it felt like it had been hours since I’d seen a sign for the Pennine Way. Maybe it had been hours. My legs were so tired and the path was so steep that I had to watch my footing carefully. Finally, finally, just as the skies began to clear, I reached the bottom of the descent and saw a sign and knew that I was close to my destination. The sun burst from behind the clouds, warming my face for the first time all day. I was exhausted, but I had made it. 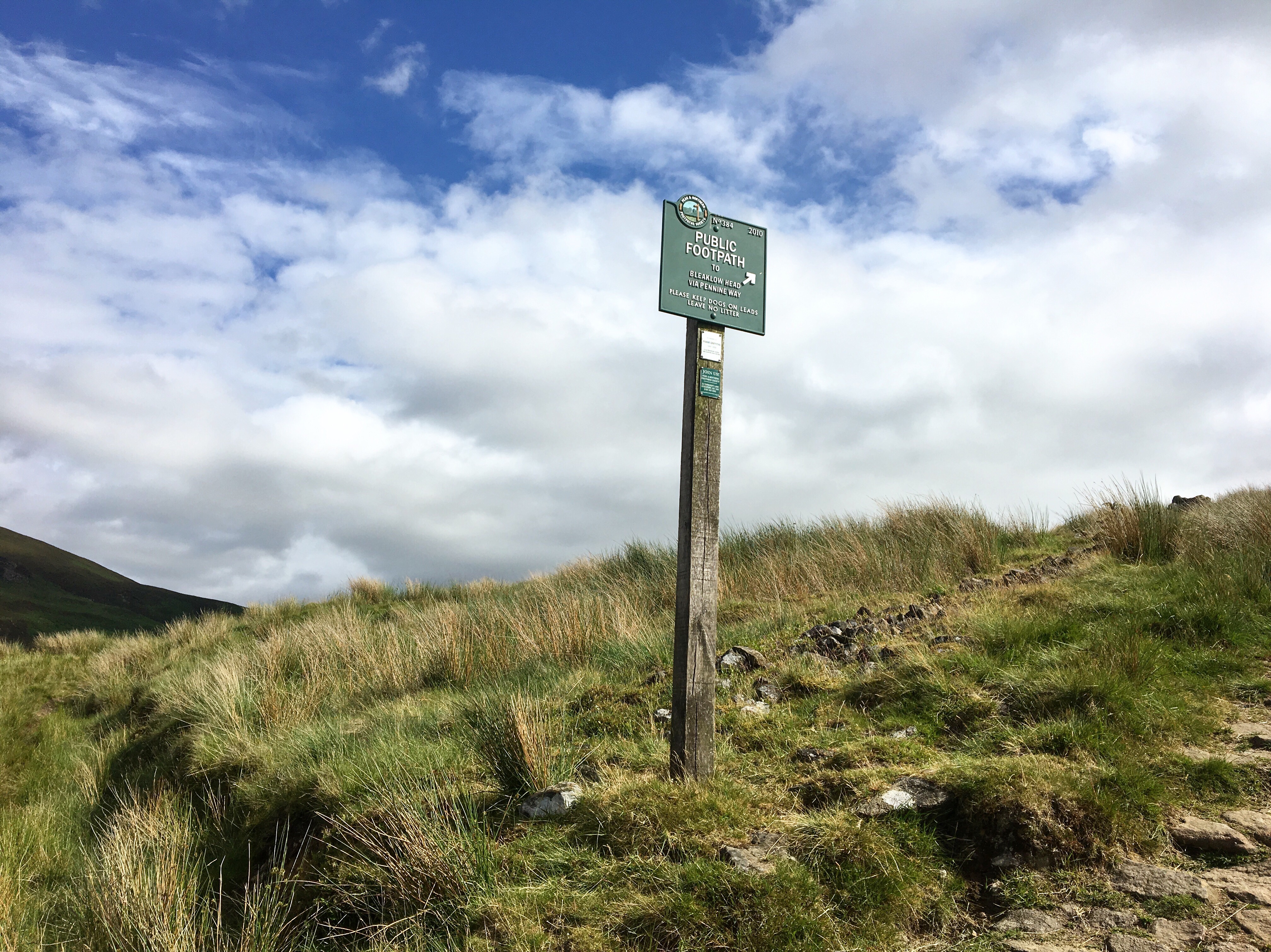 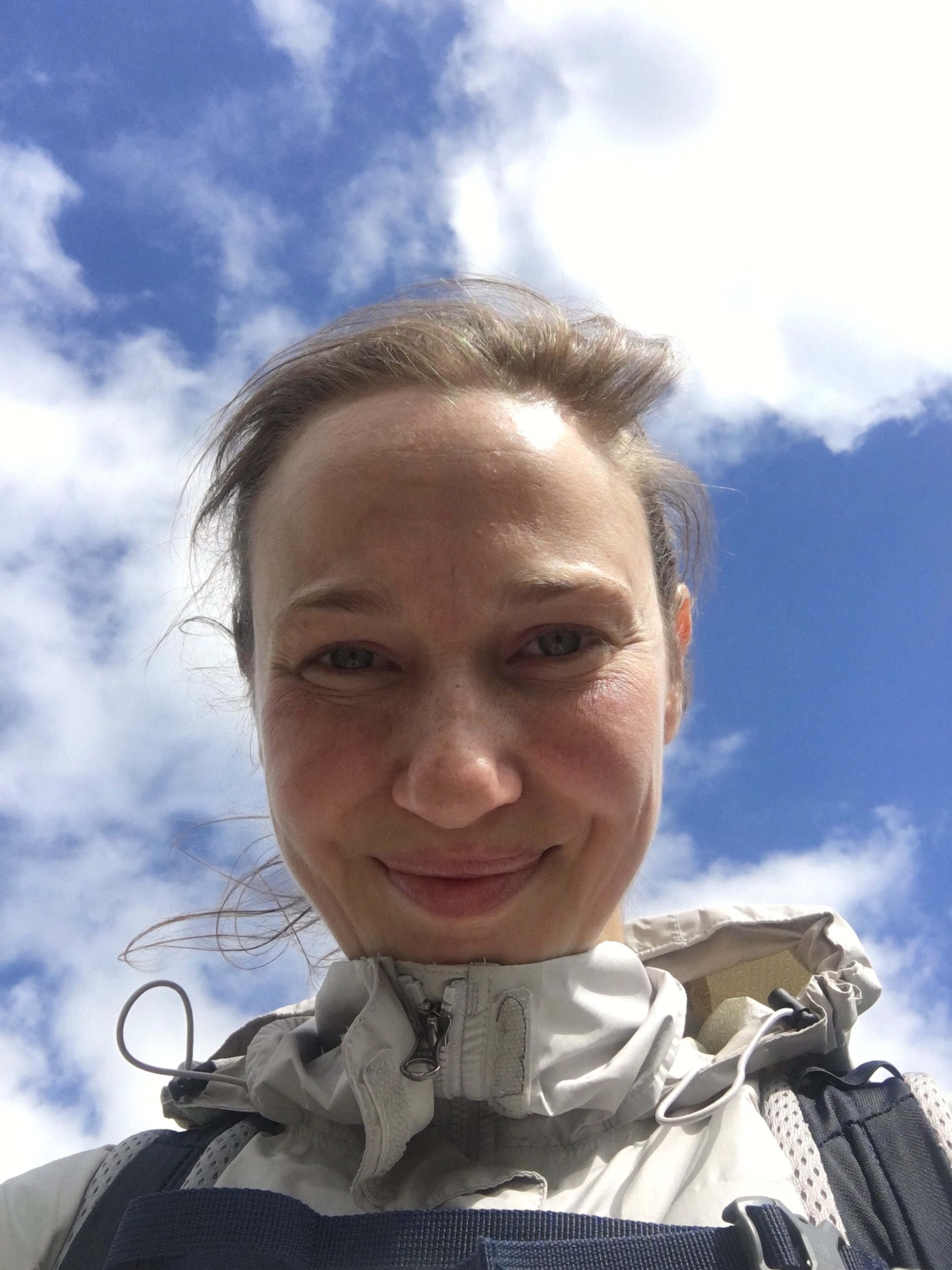 I had a room at The Old House B&B reserved for the night, and I was grateful for it. A clean towel and a bar of soap were laid out on the bed, the shower was hot, and there were supplies for making tea in the kitchen. There are no dinner options at the B&B or anywhere nearby, but the hosts of The Old House offer to drive guests to The Peels Arms a few miles away. I went with David- my trail angel from earlier in the day- and we spent our evening talking about rain and gear and our feet and where we were going the next day.

I told him how I was wearing hiking shoes, and not boots, and that I wasn’t concerned about falling or twisting an ankle. “I don’t have the slimmest ankles in the world,” I told him. “Not good for high heels, but great for walking and hiking.”

David held up his beer glass. “To sturdy ankles!”

So this was day one: long and difficult and wet and at times defeating. But in the end, I could feel the sunshine on my face and I had the company of a fellow hiker over a warm meal in a cosy pub, along with a room of my own and a clean towel. This was all the fortification I would need; when I woke up the next morning, I was ready for whatever the day would bring. 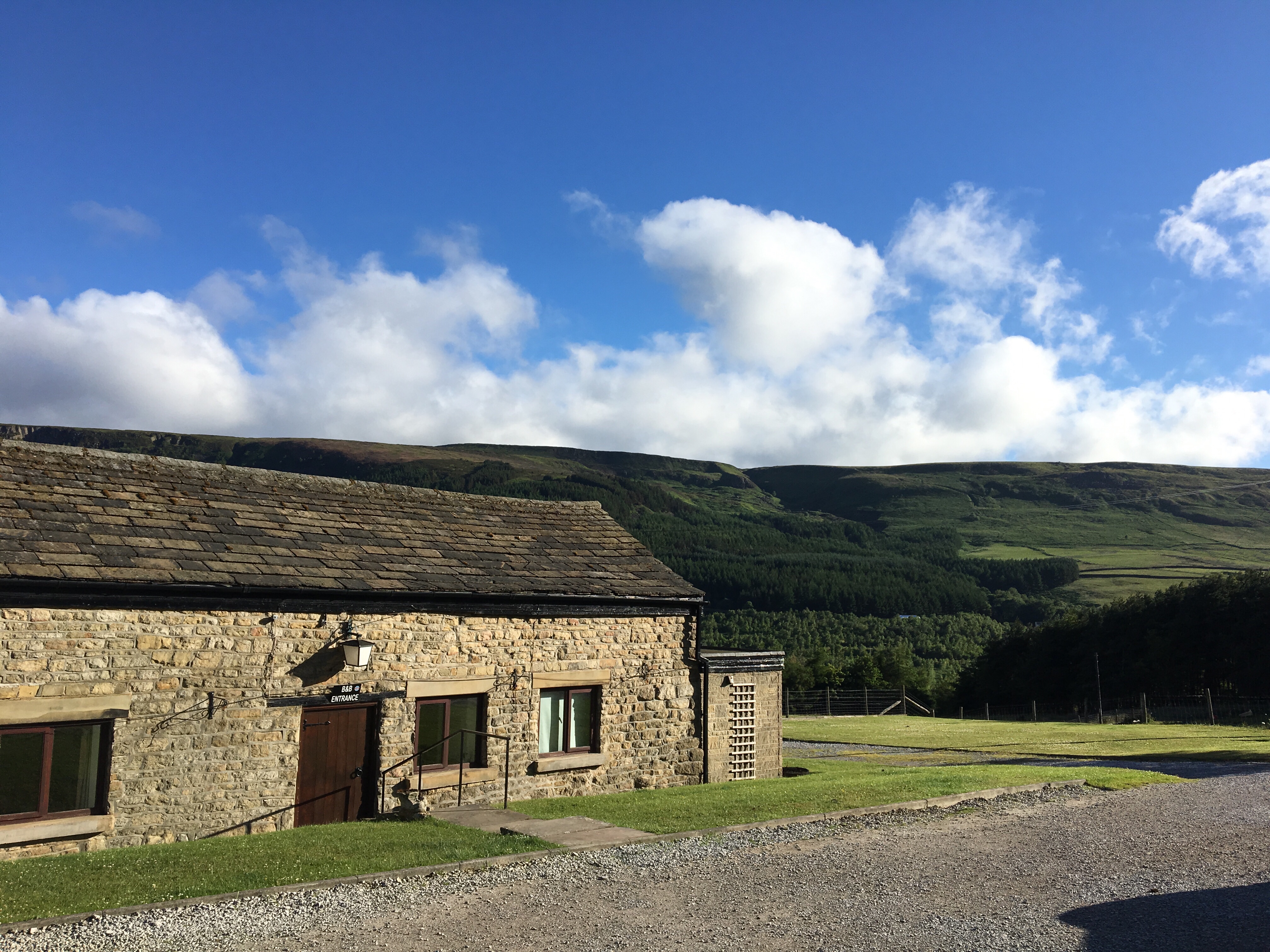