When I woke up on the morning of Day 9, it was raining.

It had started raining the evening before and continued through the night. There were puddles of mud in the yard. We’d forgotten to close the windows of the outer porch area where our clothes were drying, and I was dismayed to discover that my clothes were just as wet as they’d been the night before. I squinted at the sky, all I could see were dark clouds.

But the little kitchen of our gîte was warm, there was coffee, and bread, and leftover plums from the day before. 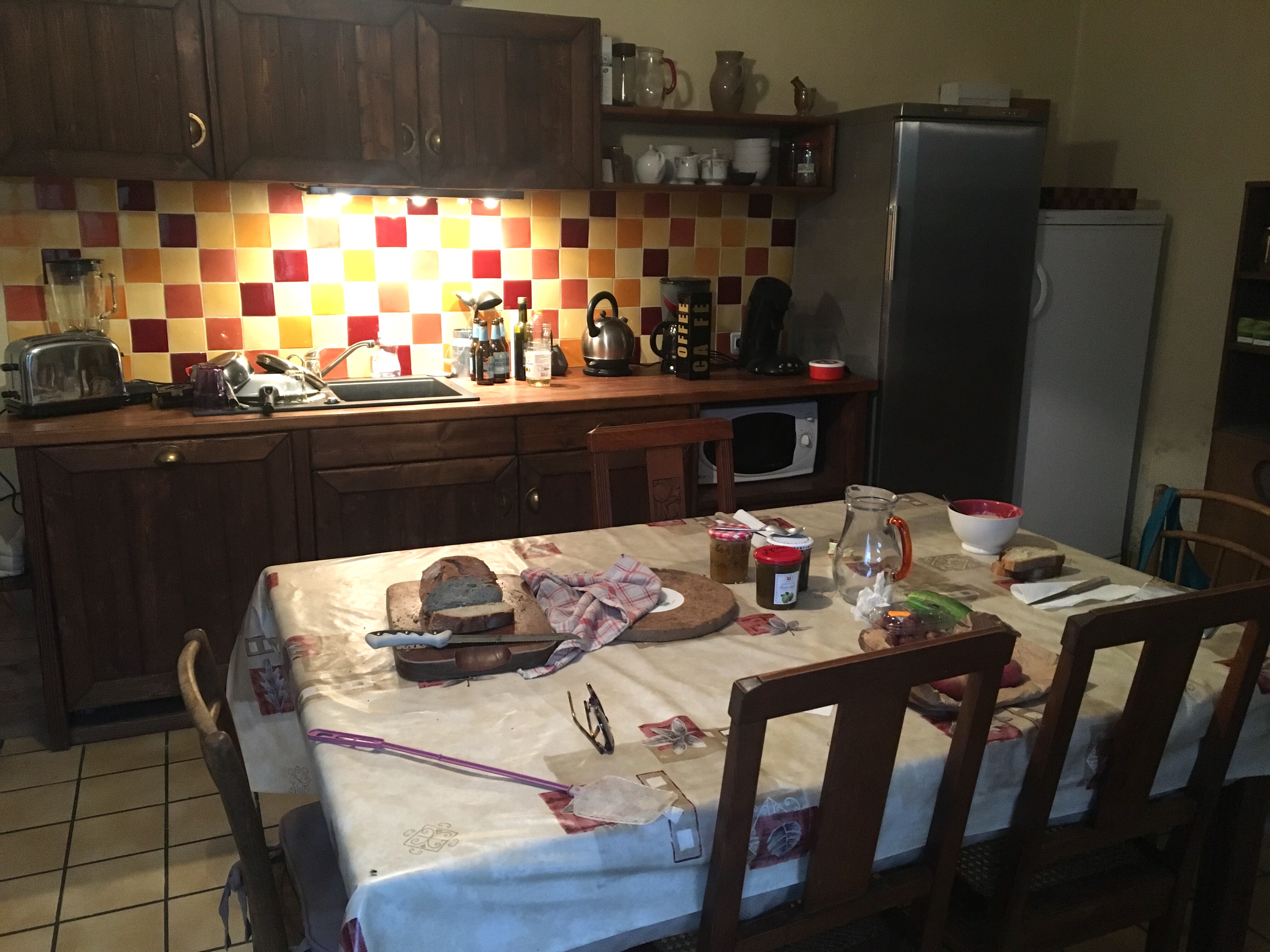 Mario and I looked through our guidebooks as we ate breakfast, and he told me his plan for the day. We were about 30km from Conques (it was hard to tell because we were on a variant, the GR-6, and the guidebook wasn’t specific), and it was a distance that Mario was going to split into two days. He was ending his pilgrimage in Conques (as were many other pilgrims), and there was no reason for him to cover the distance all in one day, especially in the rain.

I was undecided. A big part of me wanted to walk the 30km into Conques. I felt that I needed to reclaim my Chemin, break out on my own, walk a bigger stage, have my own adventure. I also knew that I needed to make up some kilometers if I wanted to arrive in Cahors in 5 day’s time (for my train reservation).

Mario was trying to talk me out of it. I knew that he wanted to have my company for the last few days of his pilgrimage, but he had other good points as well. “It’s raining,” he pointed out the window. “You’re going to walk all day in wet conditions, and arrive to Conques late in the afternoon. It’s an amazing village and you’ll wish you had more time to spend there.”

I nodded. Conques is a significant site along the Chemin du Puy; not only does it have the reputation as being the most beautiful village in France, but it has a rich history. I didn’t want my time there to be rushed, but I also knew that there was more rain in the forecast for the next day.

There was one other factor that I was weighing in my decision: if I walked the longer day, I’d not only be saying goodbye to Mario, but I would most likely be moving ahead of everyone else I’d met so far on the walk. I hadn’t seen any of them for the past few days, and it made me sad to think that I might never see them again.

I told Mario that I would make up my mind as I walked, and that I would surely see him somewhere on the path. And then I left, and he gave me a head start because he knew I wanted to walk alone. 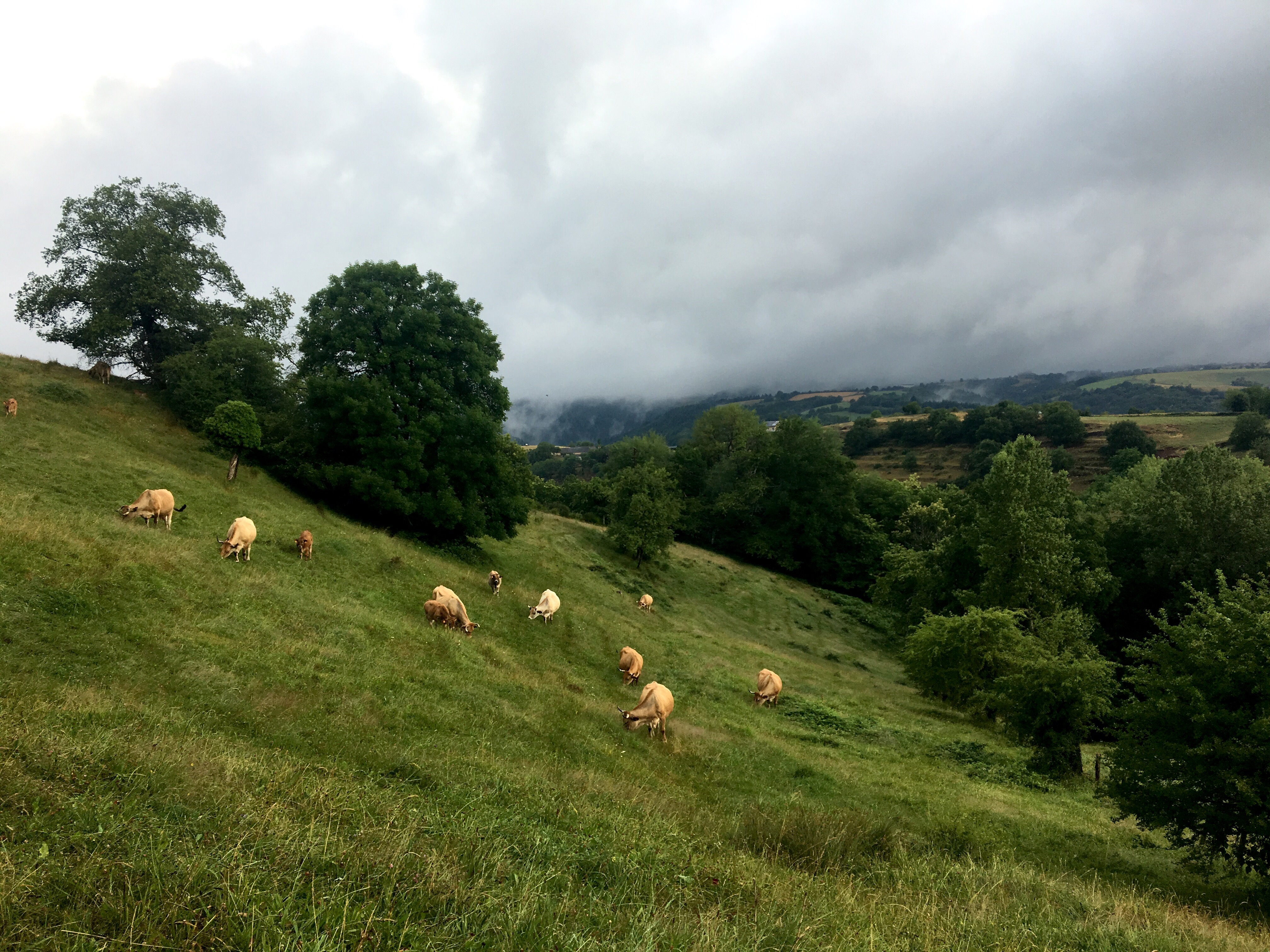 The morning was… just okay. I don’t like walking in the rain. That’s no surprise, and I’m sure that most of you probably agree with me on this: rain just sort of dampens the whole day (haha). I just plodded along, the skies were gray, the path was muddy, rain spit at me on and off. My hood was up, I could only see the path in front of me, and I focused only on thoughts of a dry café and a hot cup of coffee. Because I was on a variant, my guidebook had no information on towns or services, so I knew that it could be a long time before I passed an open bar or café (if at all). 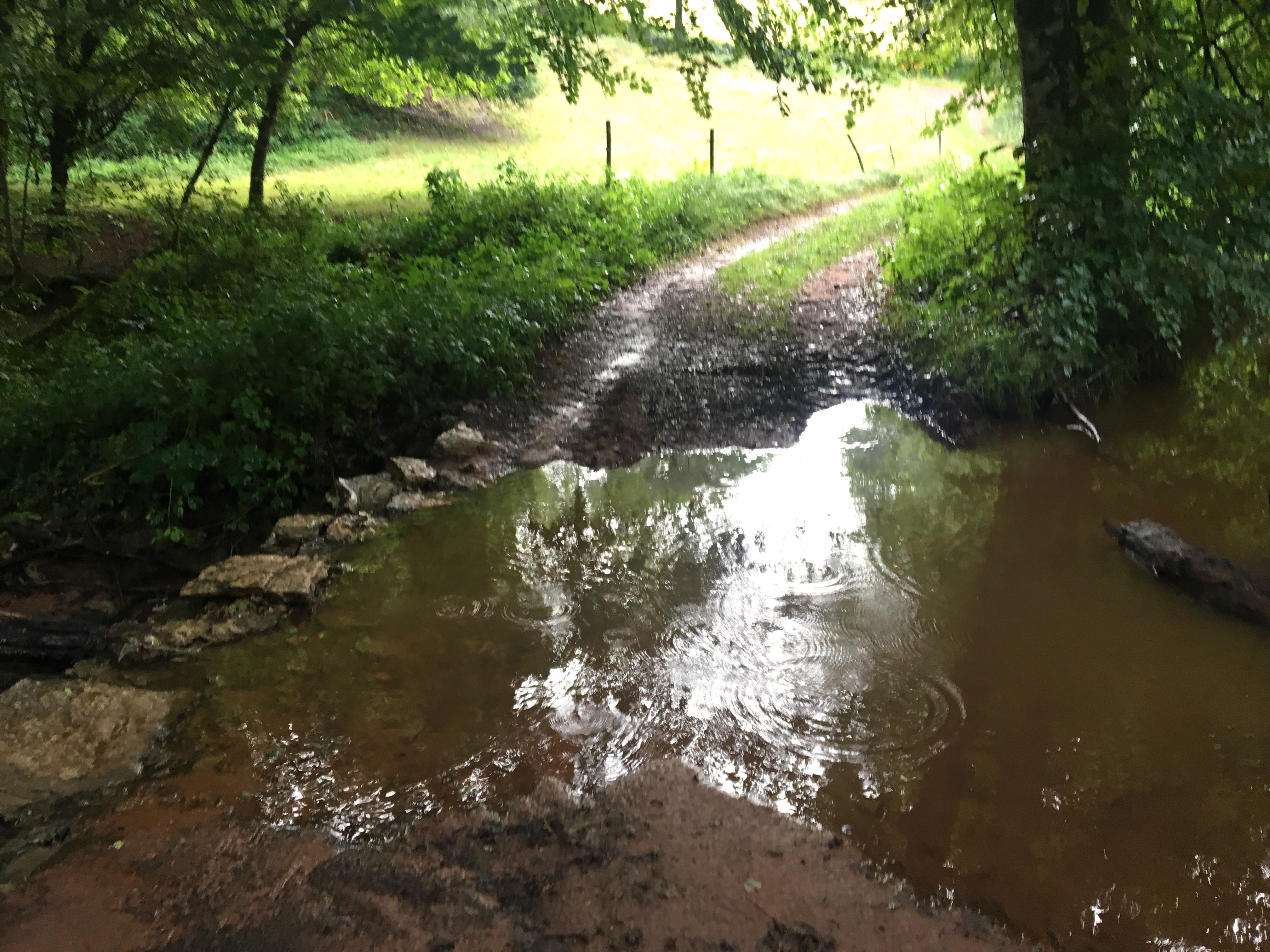 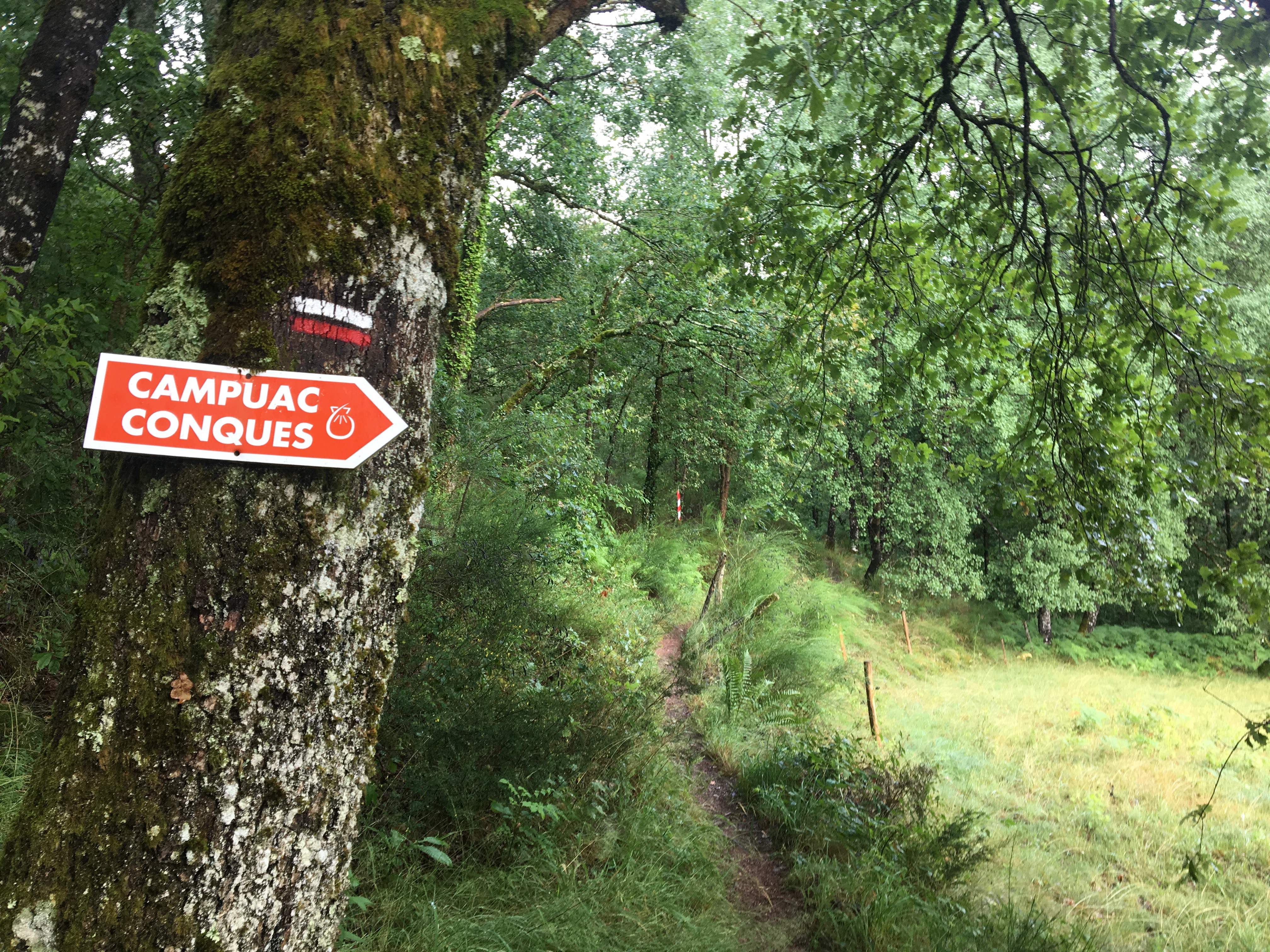 But to my surprise, I came upon a lovely village with signage for a café, a little grocery store, and a bakery. The place looked deserted, but I crossed my fingers as I walked through the empty square and headed towards the café. To my great delight, I saw a woman sitting inside at one of the tables, so I took off my pack, left it outside in the driest spot I could find, and went in for a café crème. The owner was kind and she asked me questions about my walk and where I was from. In turn, I asked her what she knew about the weather for the next few days, and if she had any opinions on whether I should walk all the way to Conques or not.

I still didn’t have an answer for myself, but I continued to linger over my coffee. It was nice to let my clothes dry out a little, but I was also sort of waiting for Mario. He eventually arrived (after the first 20 minutes of the morning’s walk he realized that he forgot to put money into the donation jar at our gîte, so he turned around and went back). We chatted for a few minutes, and he told me that he was definitely walking a shorter day and not going all the way to Conques.

“What are you going to do?” he asked.

I was leaning towards walking all the way to Conques, but I told him that I was sure I’d see him again at some point during the day. We’d only been walking for a couple hours, and I knew that I would probably stop again a few times. I was certain that Mario would catch up to me, even though he had a doubtful look on his face.

The rain had stopped and I felt anxious to keep moving, so I said goodbye to the café owner, waved to Mario, and headed out. Before leaving the village I found the boulangerie, and bought a fresh croissant. I ate it as I walked, flakes of pastry falling onto my white rain jacket, and I brushed them off and smiled. I was feeling energized by the coffee, comfortable now that my pants were no longer wet, satisfied with the fresh croissant, happy that I had seen my friend. 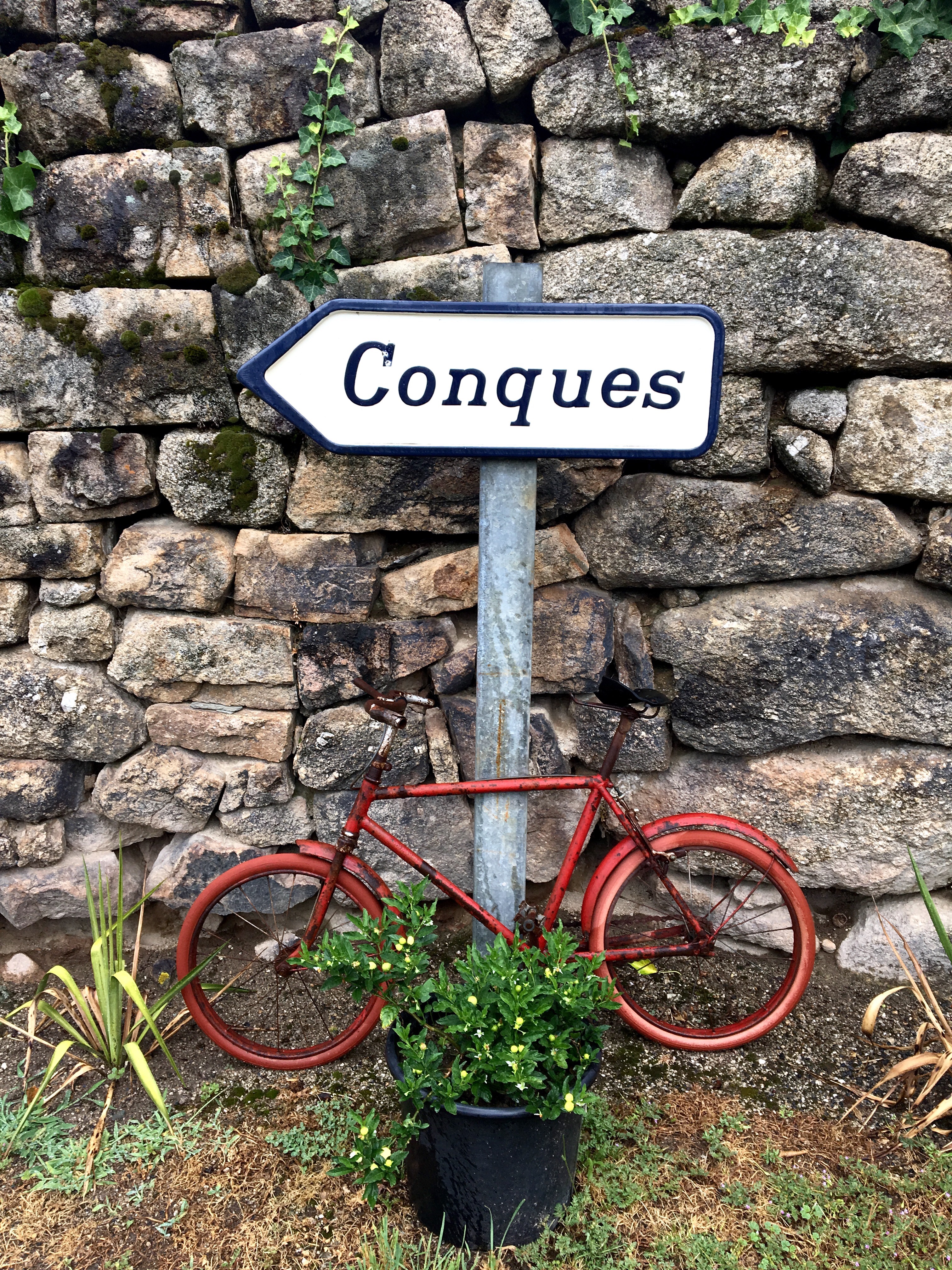 The rain continued on and off but it was never heavy, and I felt energized. I walked fast, barely taking note of the places I was passing through. After a few hours, I arrived in another small village just as the skies were beginning to clear and sunlight poured over the square. It was the perfect spot for a little lunch break, and I set up at a picnic table: my jacket and shoes and socks came off, and I positioned them in the sun so they could get a chance to dry. I filled up my water bottle at a nearby fountain, and took out my food: apricots and cheese, day old bread. 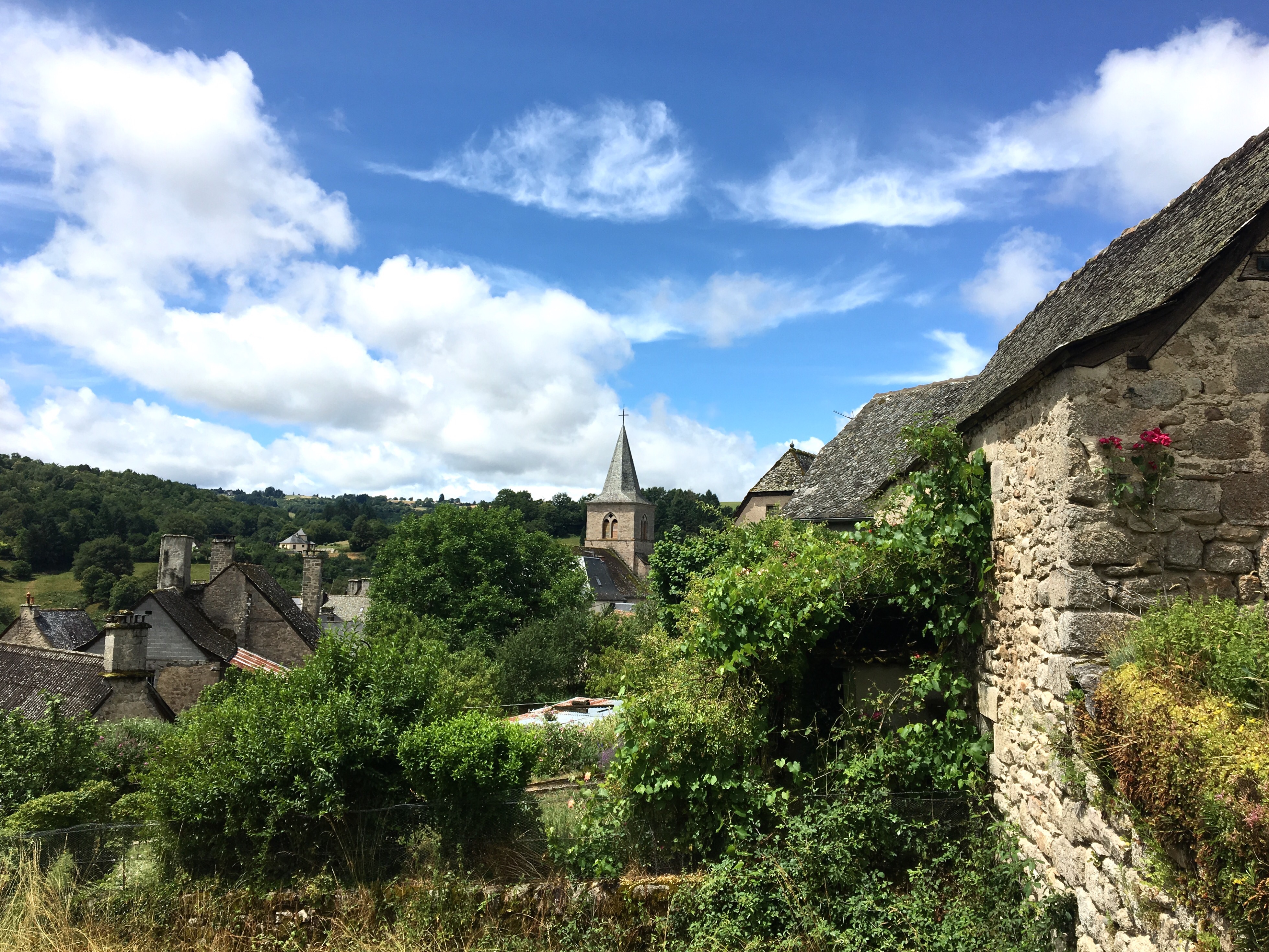 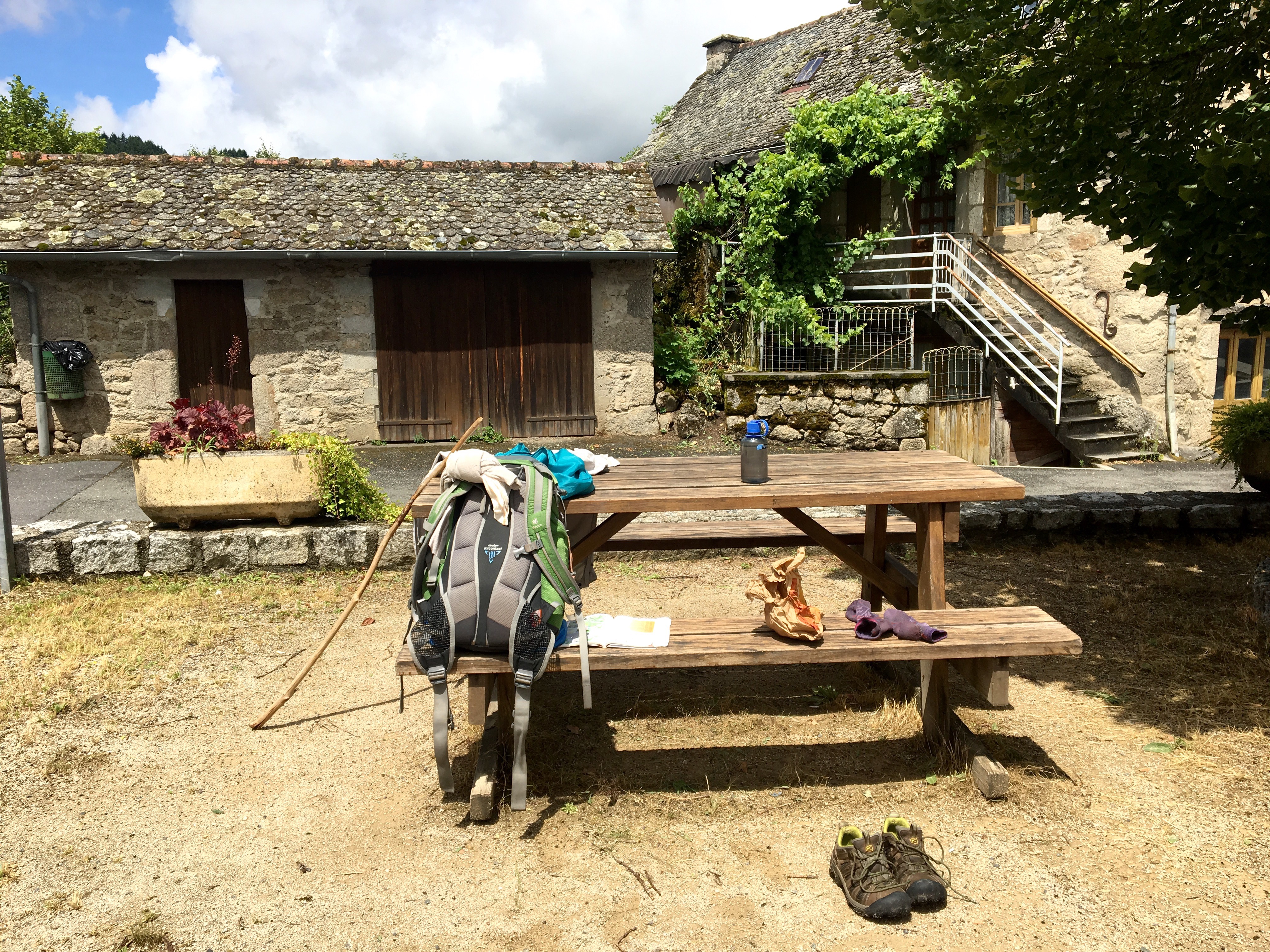 As I ate I looked at my guidebook, and when I saw where I was, I could feel my heart sink. I’d passed the place where Mario was planning to stop for the day, and I hadn’t realized it. I must have misjudged the distances or underestimated how fast I’d walked, but I knew that unless I walked backwards to find him, and if I did indeed continue on to Conques that day, I’d never see him again. We hadn’t exchanged contact info and I hadn’t even said goodbye- I’d just breezily waved at him when I left the café.

I sat at that picnic table for awhile, tilting my face up towards the sun and letting the warmth pour over me. I knew I wasn’t going to turn around, but I was hoping that Mario might decide to walk further than he planned. I kept looking over my shoulder, thinking I might see him on the path, but there was no one. In fact, I didn’t see a soul in the entire village. 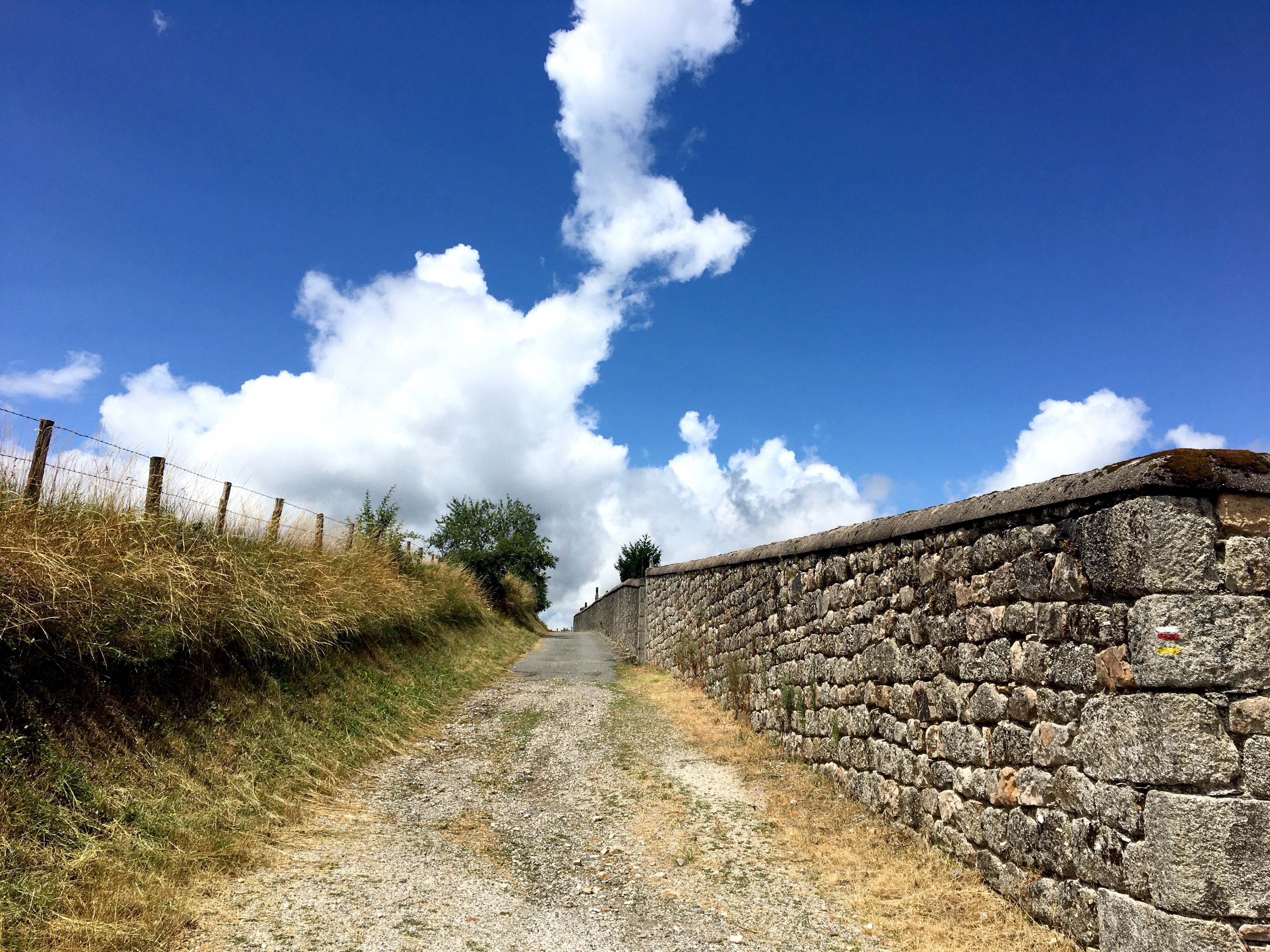 I kept walking. It was just past 1:00 and the next village was less than 3km away, and it felt like I arrived in no time. It was the village of Sénergues: another small place, with a church and a bar that closed on Wednesday afternoons (guess which day it was??), a tiny cemetery and a park. There was a large gîte/inn at the entrance of town, with pale blue shutters and a beautiful terrace in the back. I circled through the town twice, and then sat down on a stoop in front of the gîte. I still hadn’t seen anyone, the village was empty, and it was barely 2:00pm. 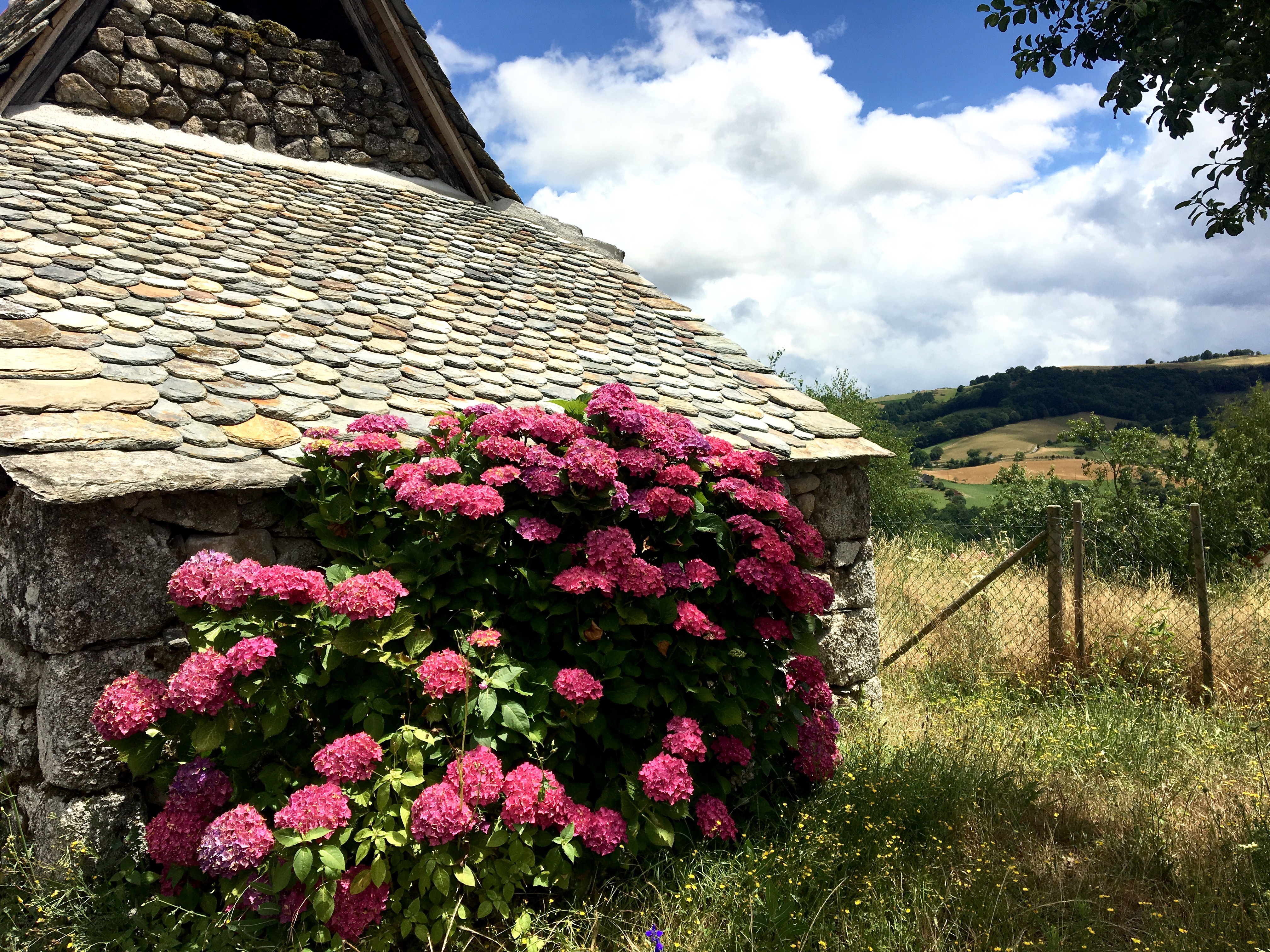 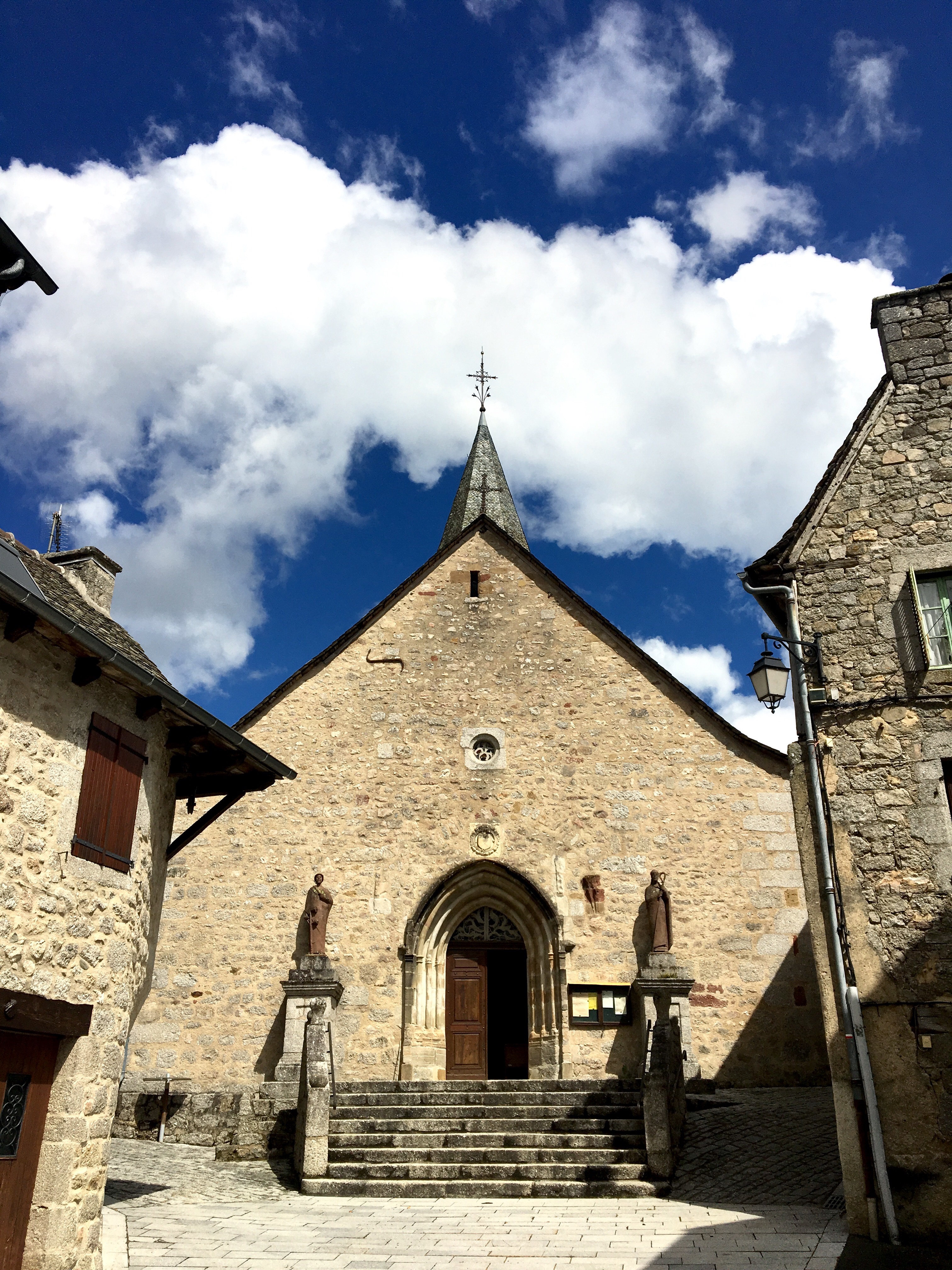 Should I stay, or should I go? I sat there for what felt like a long time, not knowing what to do. I wanted to keep walking, I could feel it in my bones. The sky was a brilliant blue, the clouds were a shocking white, the sun was warm. There was more rain in the forecast for the afternoon- a chance of thunderstorms- but I wondered if I could beat the rain. And I didn’t know what I was going to do with an entire afternoon and evening in a deserted village with a closed bar. 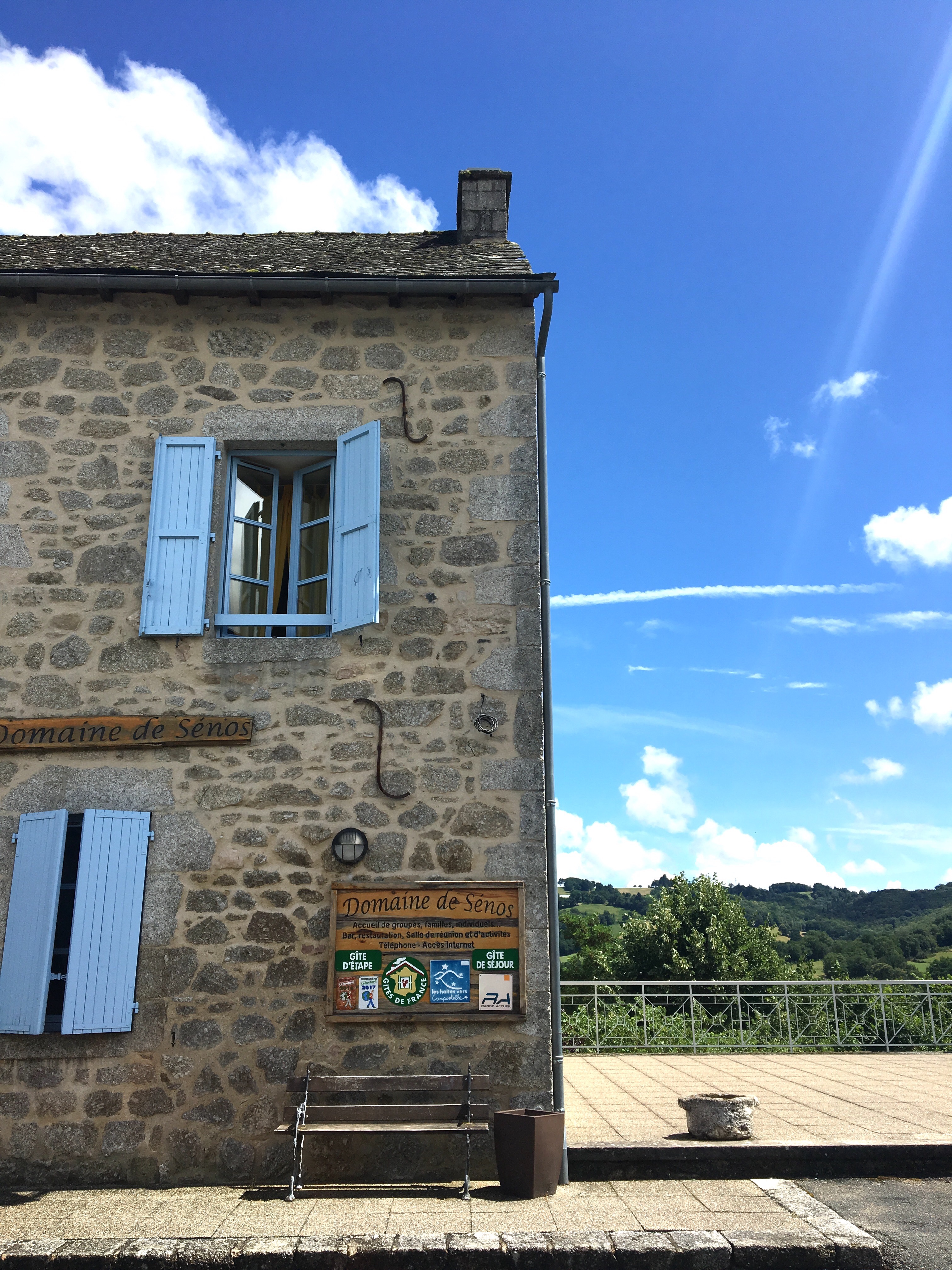 But there was a lump in my throat. I hadn’t said goodbye.

And then a group of pilgrims arrived- two men and two women- and we all wondered if the gîte was open and suddenly I was walking inside with them, and inquiring about a room.

And I was given a bed in a room with no one else, in a small little private corner right next to a small little private bathroom. I took a shower and washed my clothes and hung them on the shutters in a small patch of sunlight. I walked through the town again, three more times, around and around in circles. I went to the small grocery store and bought a bag of chips and a banana and two postcards and a cold drink and took it back to the gîte, where I set up at a table on the beautiful terrace. 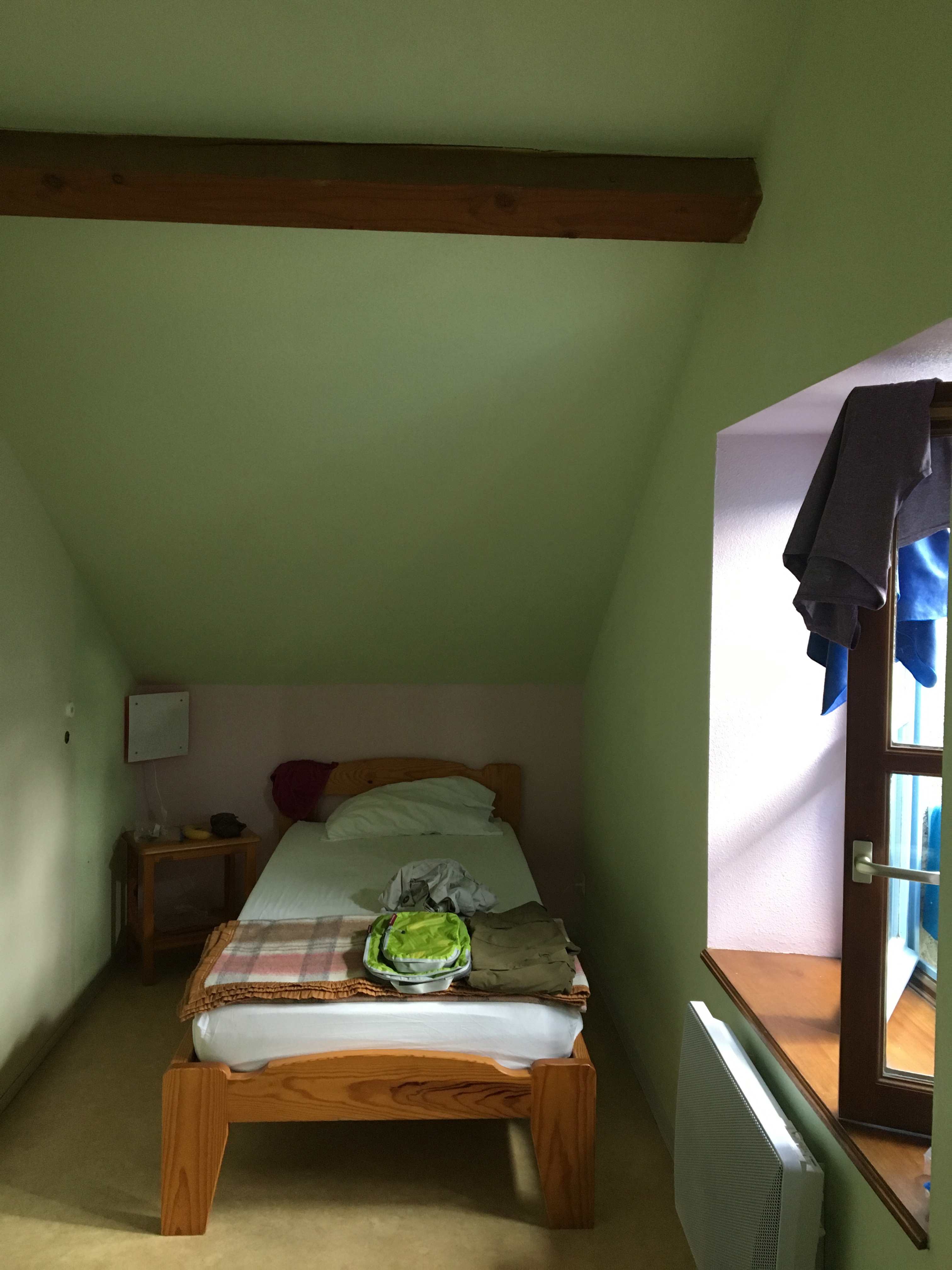 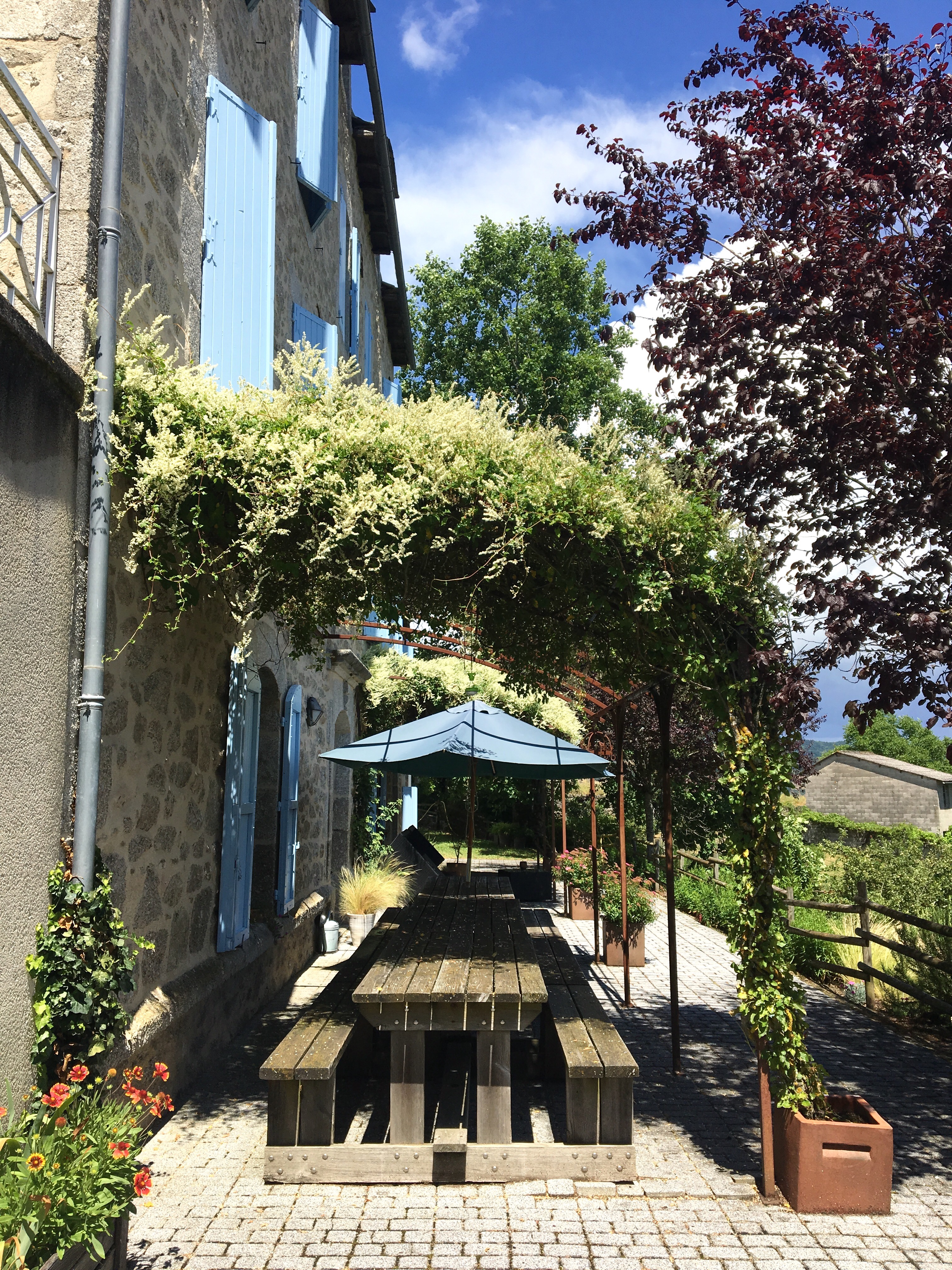 It began to rain after only 10 minutes, a heavy and lashing rain and I ran upstairs to my room and pulled my clothes from shutters, as the wind howled and tree branches whipped and lightening flashed through the sky.

Thank goodness I had decided to stop walking. I think I might have known, all along, that I wasn’t going to walk to Conques. I think I just needed to feel like I was making my own decisions. I’d enjoyed Mario’s company, but I needed a little time on my own, and I’d given it to myself that day. And even though I was feeling a little lonely, and a little restless, even though I wished I were still walking, I felt good about my decision.

The evening was quiet: I wrote in my journal and tried to plan out the next few days of walking. At 7:00 I went downstairs to dinner, and met other pilgrims. They were all walking in groups or pairs, all of them from France, and it was hard to understand the conversation but the food was good. There was quiche and salad, sausage and mashed potatoes, and some delicious pudding-like thing for dessert. (And bread, of course, always bread).

I went to bed early, by 9:30, tucked under the covers and with a cool breeze blowing through the room. The next day would be a short one- only 9km to Conques- and I wondered what I would find there. A beautiful village? Familiar faces? Mario? The rest of my friends? I hoped so. 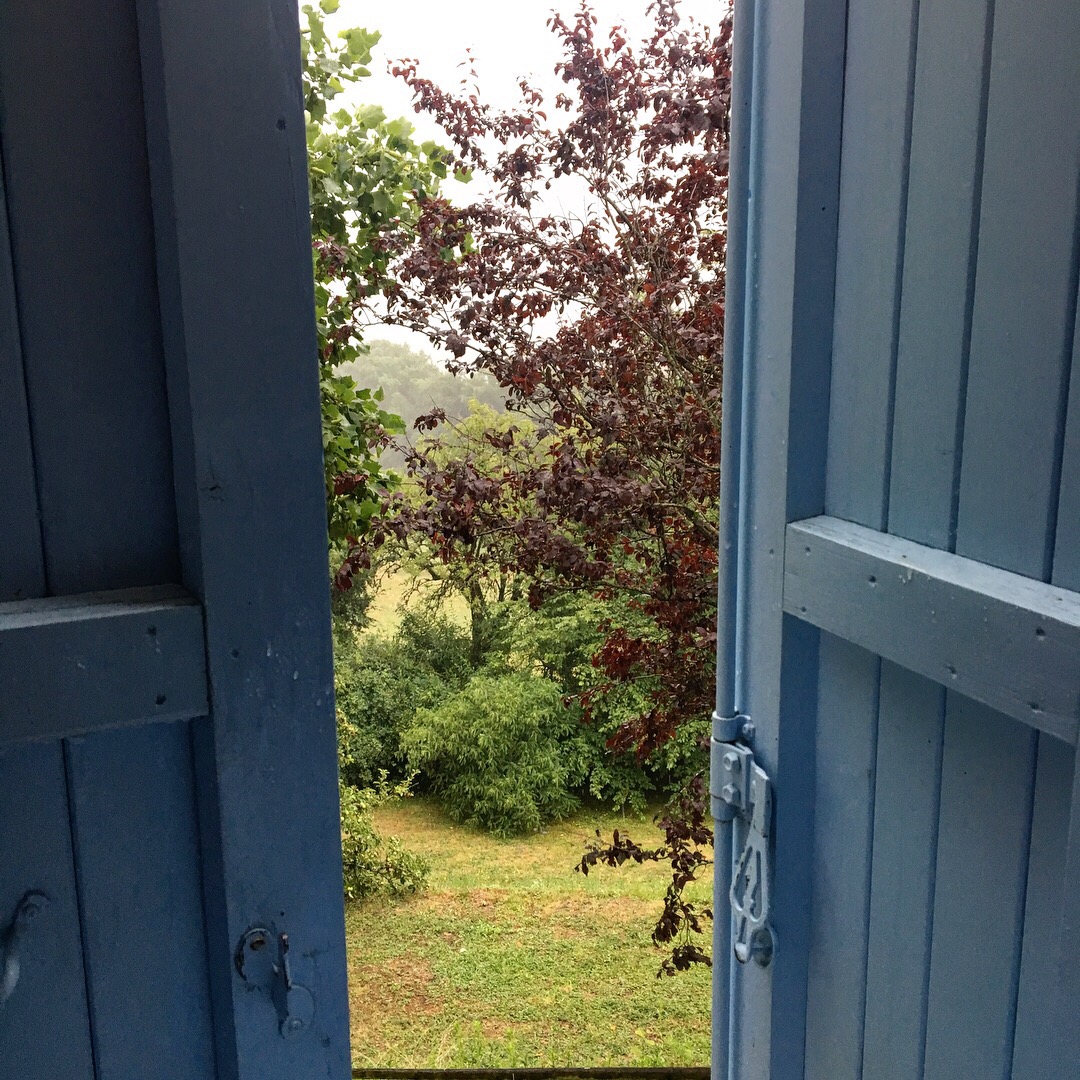 Next Post: In the Center of it All, Day 10 On the Chemin du Puy