I woke up in the gîte in St-Côme d’Olt feeling like I had gotten a really good, refreshing sleep. In fact, it was probably the best sleep that I’d gotten so far on the trip, and I could feel the effects of that throughout the day: I was energized, happy, and able to walk and walk and walk. 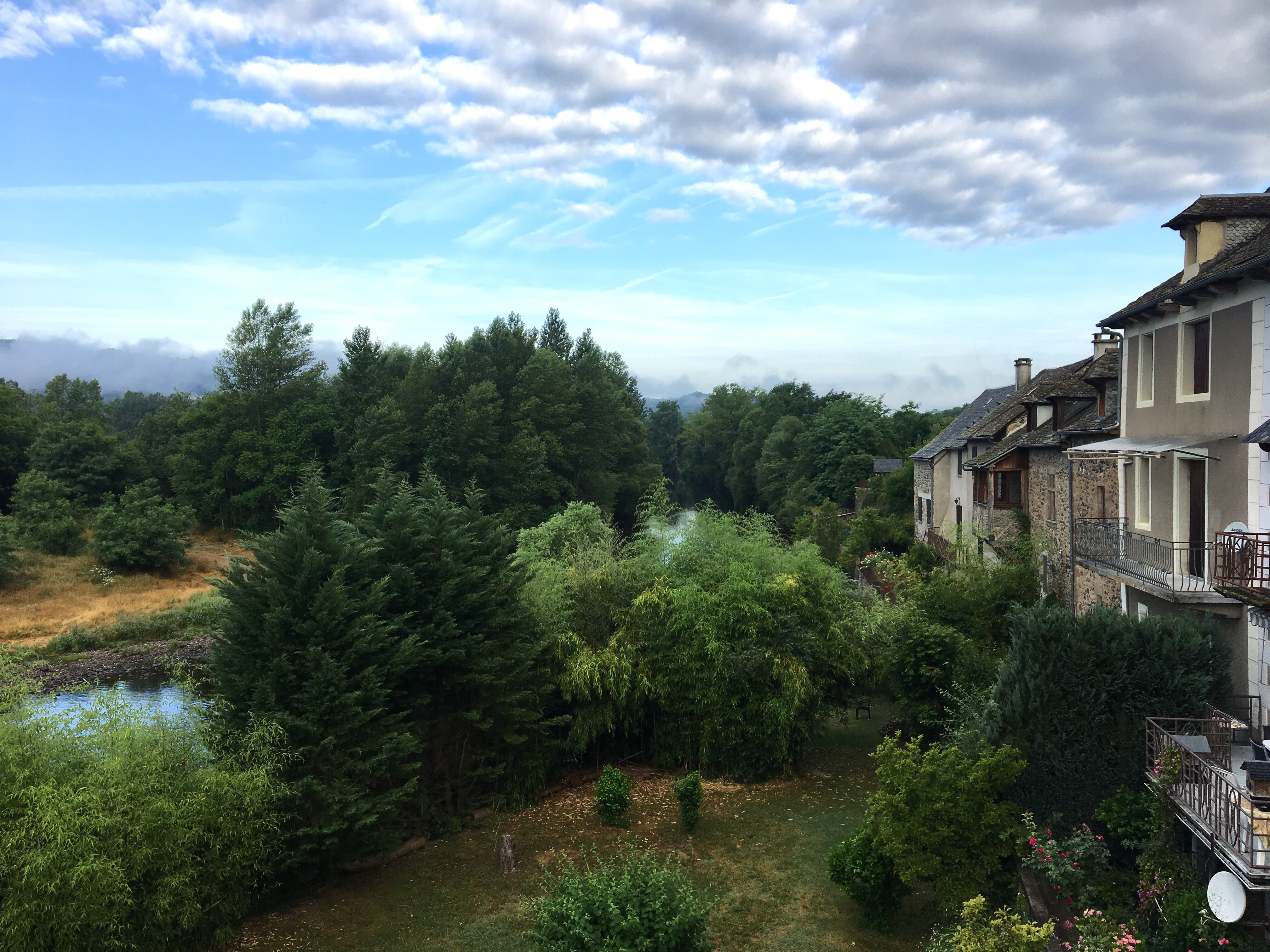 I suppose the 26km distance wasn’t incredibly long, not compared to what I’ve done before, but Day 8’s walk wasn’t flat; in fact, it was anything but flat. 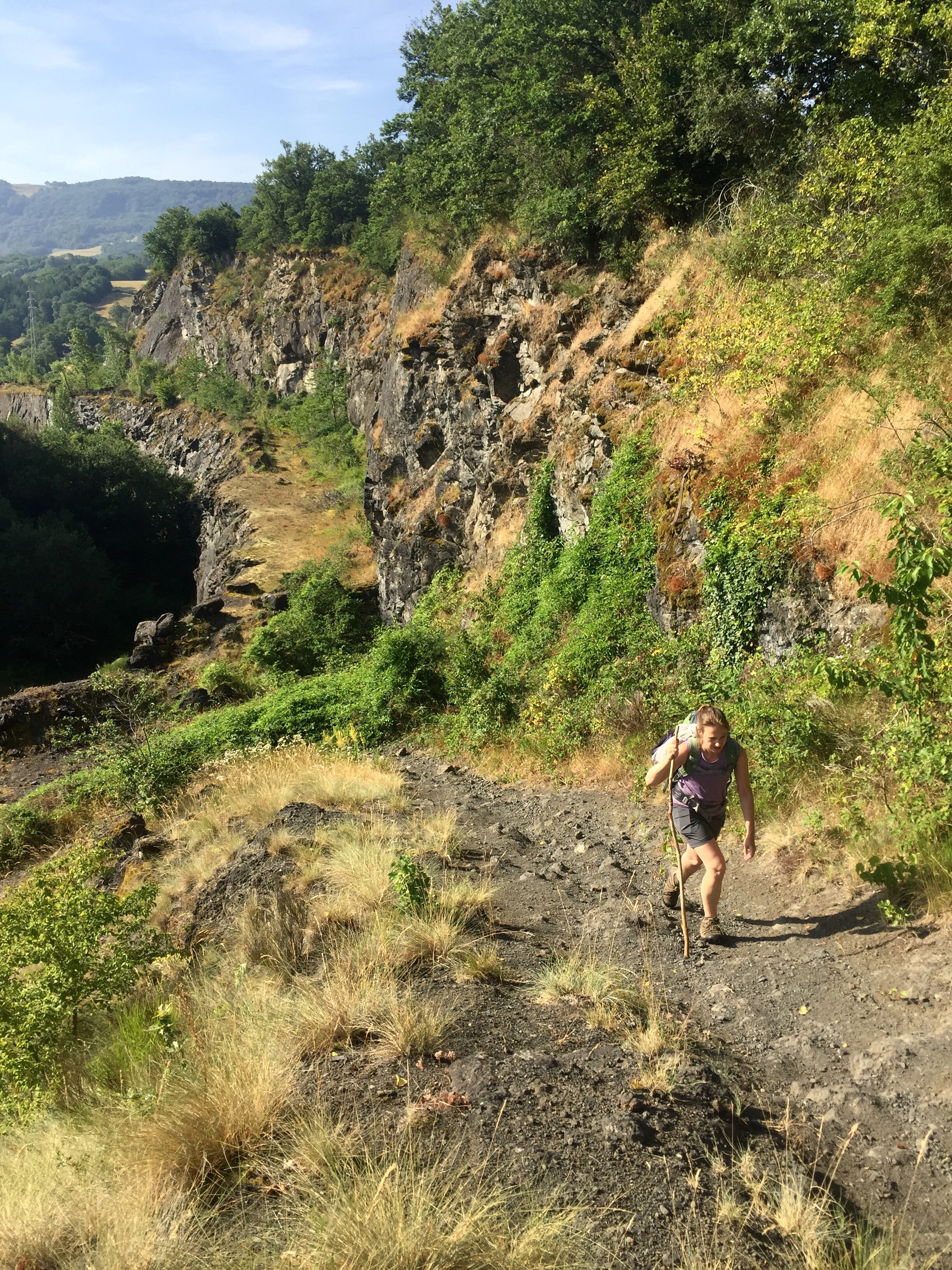 Mario and I decided to opt out of taking the morning detour that would lead pilgrims along a rather flat path bordering the Lot river. This detour was supposed to be pretty, but it was no comparison to the main route of the Chemin, which would climb steeply for several kilometers (and then descend almost as steeply). Why climb unnecessarily? For the views, of course! 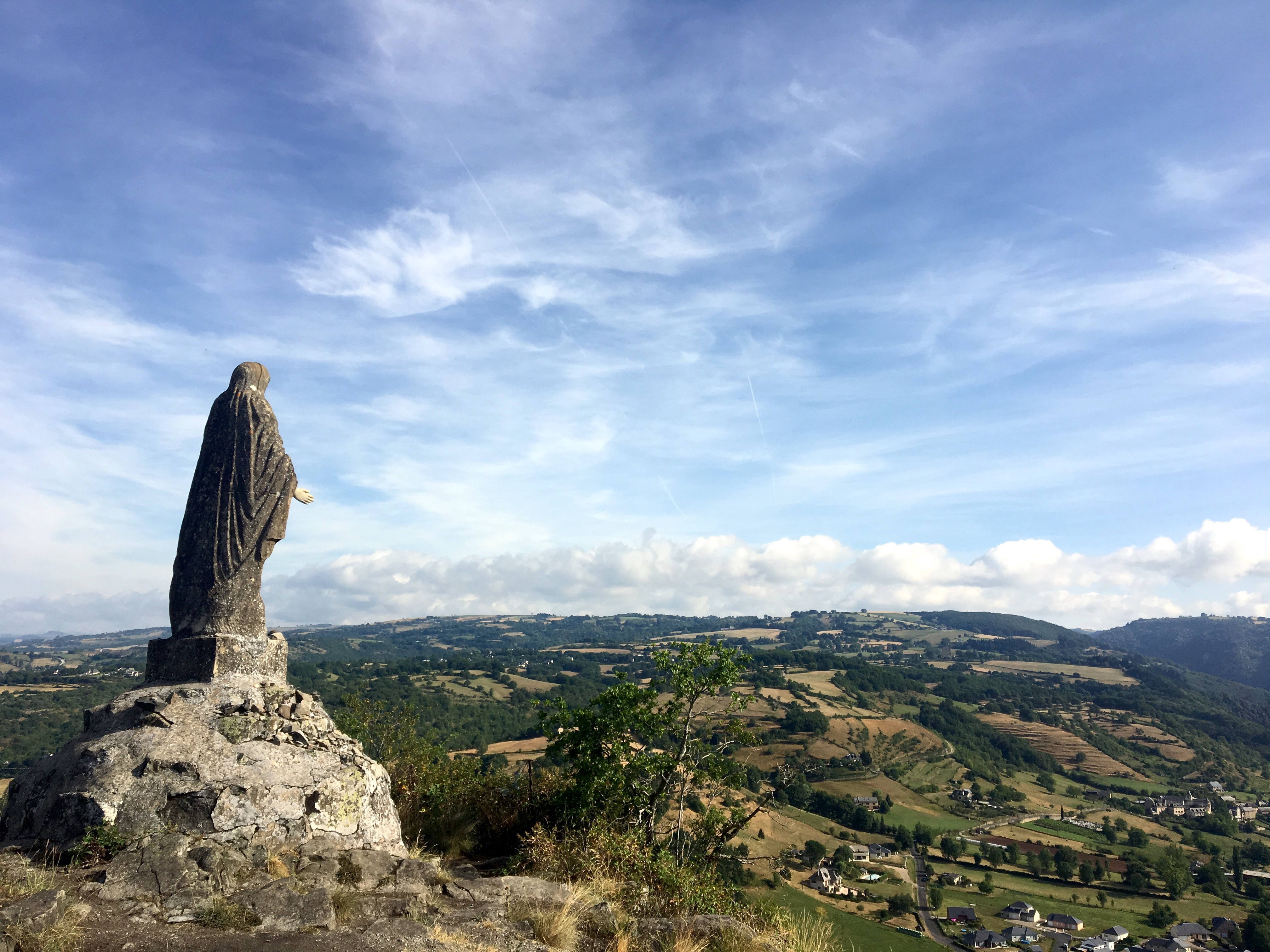 The morning was perfect: blue skies, warm but not-yet-hot sunshine, low humidity. I felt strong on the ascent to the Vierge de Vernus (the statue pictured above), and then just as good on the walk back down. It also helped that things moved a little more slowly with a walking companion. Mario’s pace was similar to mine, but whenever you’re walking with someone, the journey always seems to take a little longer. He would stop for a photo, then I would stop for a photo. He would point out a large cobweb, I would stop to admire the view. With a lot more stopping and starting, it was like I had little breaks built in (when I walk alone I always take photos, but I usually just slow my walk down to a ‘pause’, and begin again just as quickly). 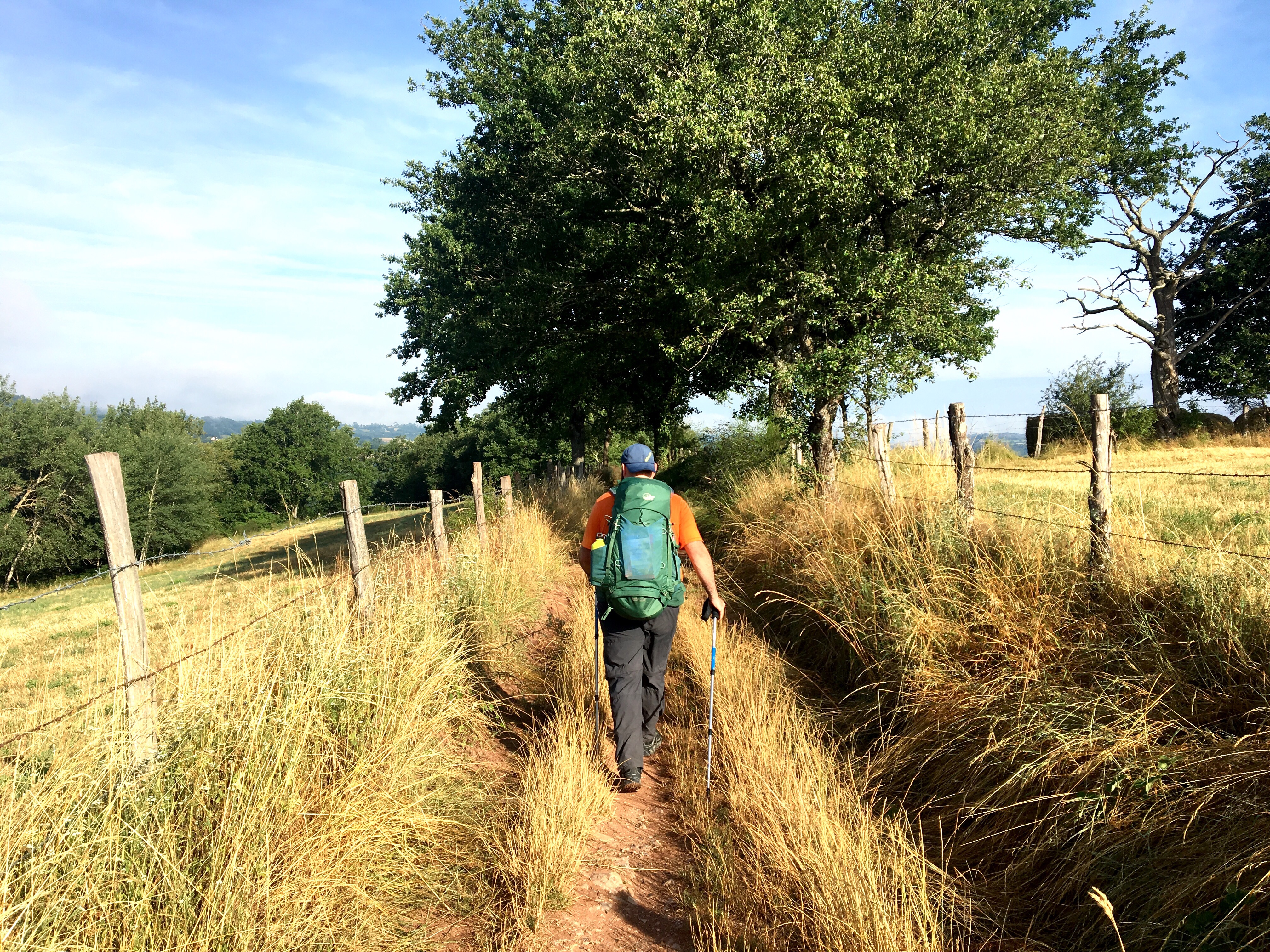 But by the time we got to Espalion, I was feeling a little restless. Maybe that’s not the right word, I’m not sure what the right word is. I’d had fun walking with Mario, but I was also craving a walk to myself. I know, I know, I’d been walking alone ever since Hilary left, but these walks are completely different when you’re with someone vs when you’re alone. At least, the feeling changes completely for me; it’s a different experience. I knew that Mario would respect whatever I wanted to do- continue walking with him or continue on alone- but I also sensed that he liked my company, and maybe that he expected that we’d continue on together.

So it was back to the drawing board for me- isn’t this always the case? I continue to come back to the Camino, in part, for the camaraderie and to make strong connections with like-minded people, and some of my very best moments have been in the company of the friends I’ve made. And yet, and yet, I lose my sense of freedom and that pure feeling of adventure when I’m with someone else. I don’t have time to crawl into my head, to think my big thoughts, to write essays and books in my imagination, to go wherever I please.

The truth is, I want both of these experiences, and that can sometimes leave me conflicted.

So, on this day, I tried to have a little of both. When we were in the small town of Espalion, I turned to Mario and said, “I think I’m going to find a coffee somewhere and then continue on a bit by myself.” 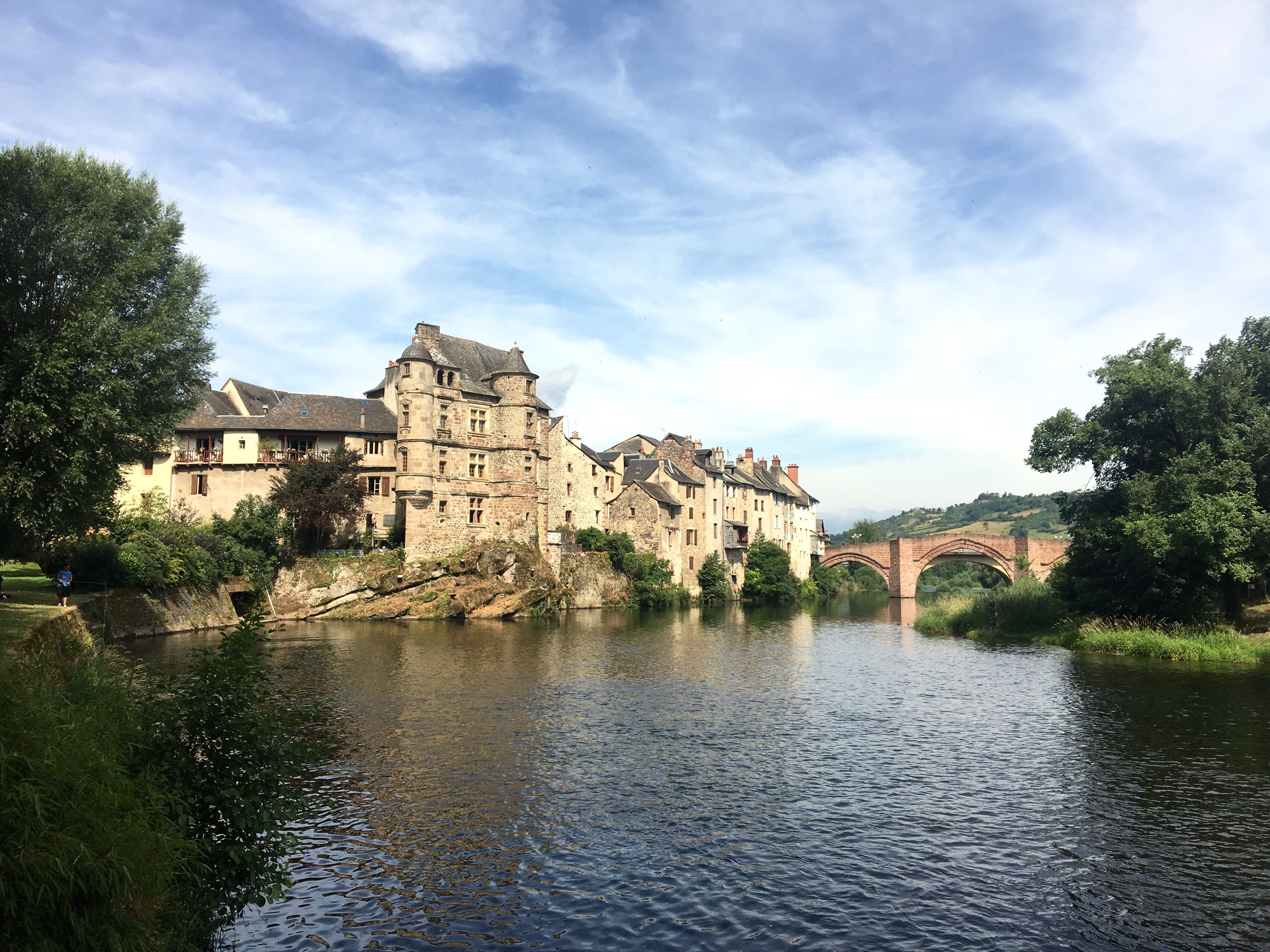 We were going to stay in the same place again that night so I knew I’d be seeing him later anyway- but that, too, was leaving me feeling conflicted. He’d found a gîte that was similar to the one we’d stayed in the night before, and I was beginning to wonder whose Chemin I’d decided to walk that day. Where did I want to go, where did I want to stay? I wasn’t really sure.

In any case, I had a coffee, I bought a ham and cheese sandwich and then I left town, alone.

And it felt really good. After a few kilometers there was an unexpected (to me) REALLY steep climb, it felt like the most difficult part of the Chemin so far. I don’t think the climb was actually all that long but it felt like it stretched on forever, and I couldn’t figure out why I hadn’t yet arrived to the top.

But finally I did, and there was a cooling wind and a wide landscape and I could feel the energy returning to my legs. I walked fast, eating my sandwich as I went, smiling as I passed other pilgrims.

Before long I ran into Mario and a few others, resting at a church. I stopped there too, to douse my buff in cold water and to use the bathroom and to eat a juicy peach. From here, Mario and I continued walking together and once again the day shifted and, finally, I let go of trying to control the experience I was having.

And as soon as I did, I could feel myself relax. We told jokes and laughed, we plucked sprigs of lavender from a bush along the path and tucked them behind our ears. We passed through gorgeous little villages and chatted with other pilgrims. 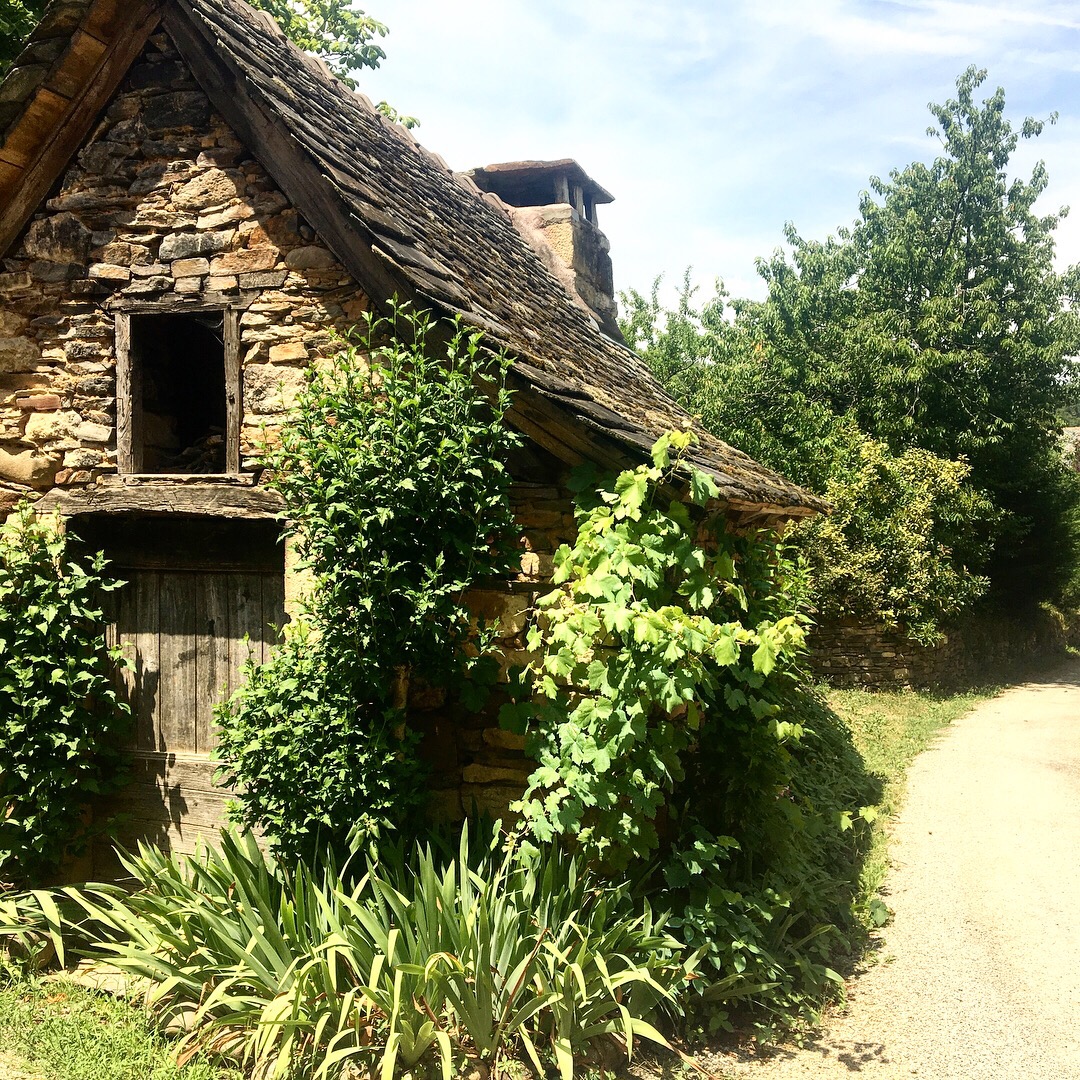 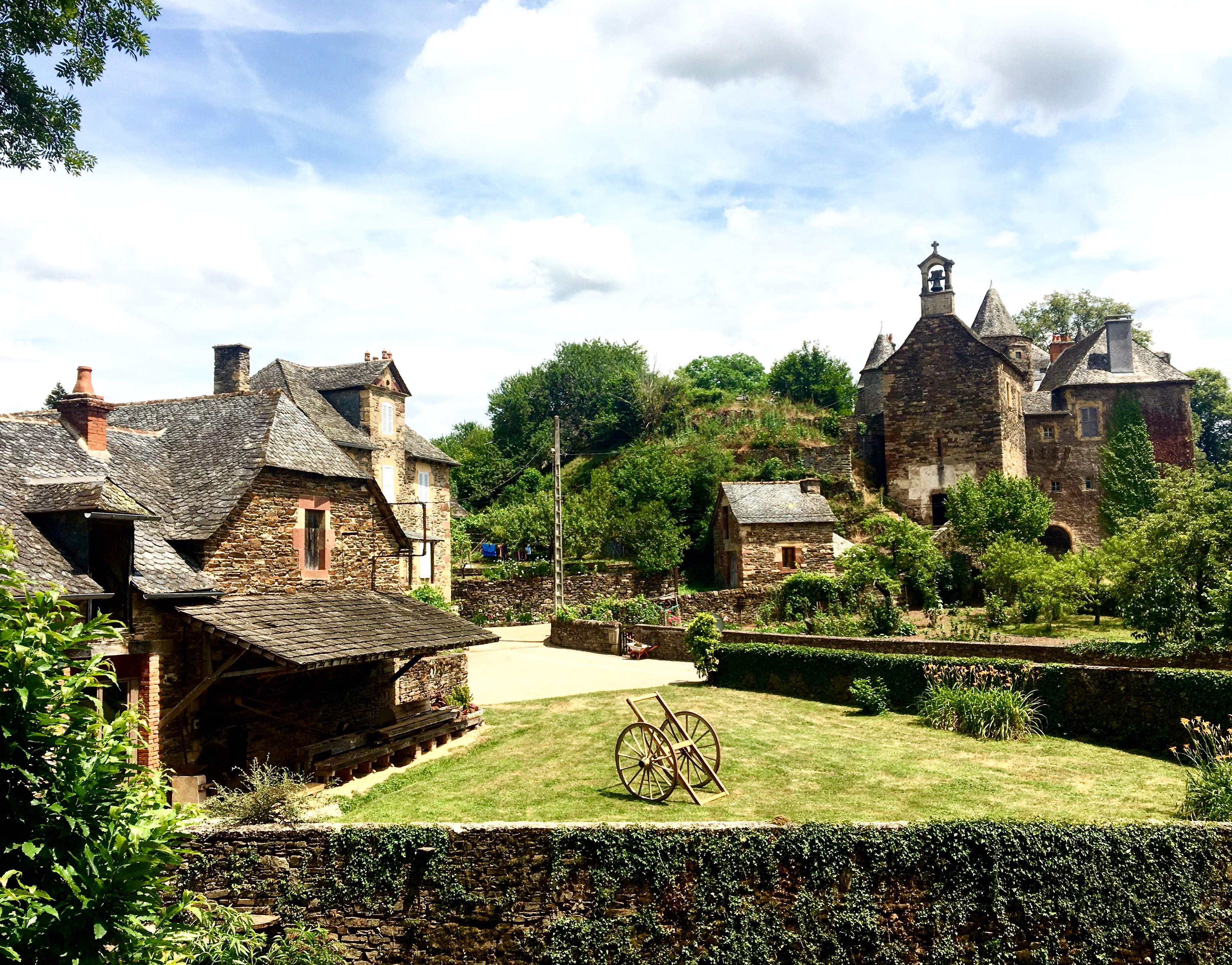 In Estaing, we stopped for a break and I saw two pilgrims who I’d met on the 2nd and 3rd day of my walk, and who I hadn’t seen since. They were two men from Nantes, both were kind but one always seemed to want to make sure that I was having a good time, that I was understanding things, that I was finding the walk through France to be beautiful. (I sometimes think that, as Americans, we’ve generalized the French as being cold or haughty or unfriendly… or maybe just disinterested. But walking the Chemin proves just the opposite: I met some of the warmest, most generous people on the Chemin du Puy, the Man from Nantes being one of them).

Estaing was another beautiful, charming and completely idyllic town, but Mario and I weren’t staying there. Once again, just as I had the day before, I felt a pang of regret when I saw how nice the town was. I’d agreed to continue walking, and to take a detour away from the main path of the Camino, so while most of the people I’d gotten to know were stopping in Estaing, Mario and I were continuing on. 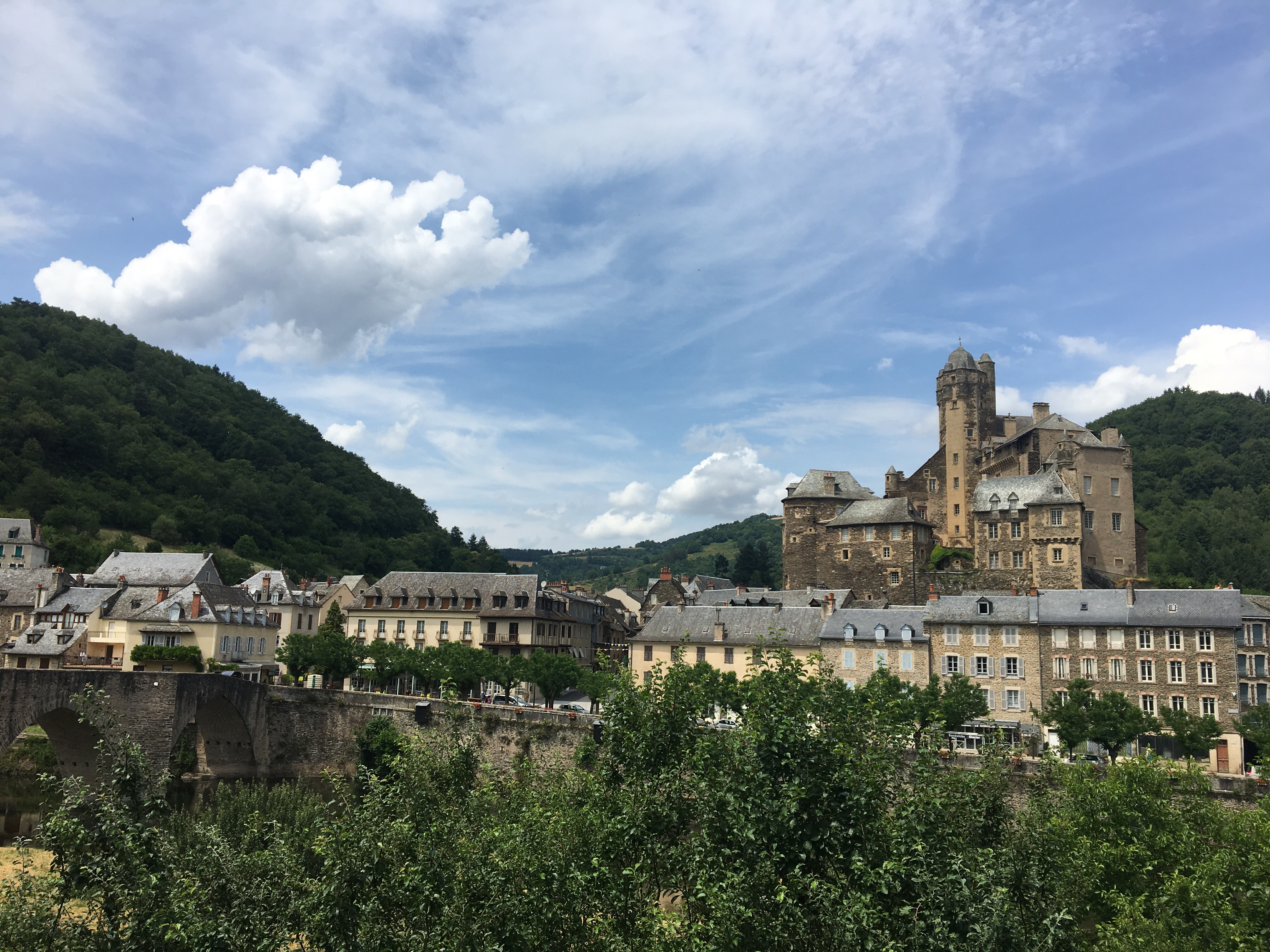 We were hit with yet another steep climb. The day had grown hot, it was 4:00pm and I should have been tired… but I wasn’t. Looking back, this might have been the strongest I felt on any day on the Chemin, and when Mario and I finally made it to our destination, overall I felt good. Did it matter that I was still conflicted on whether I wanted to walk alone or with a friend, did it matter that I’d chosen not to stay in every idyllic village that I passed along the way?

Maybe it only mattered that I was healthy, and strong, and walking in good company. 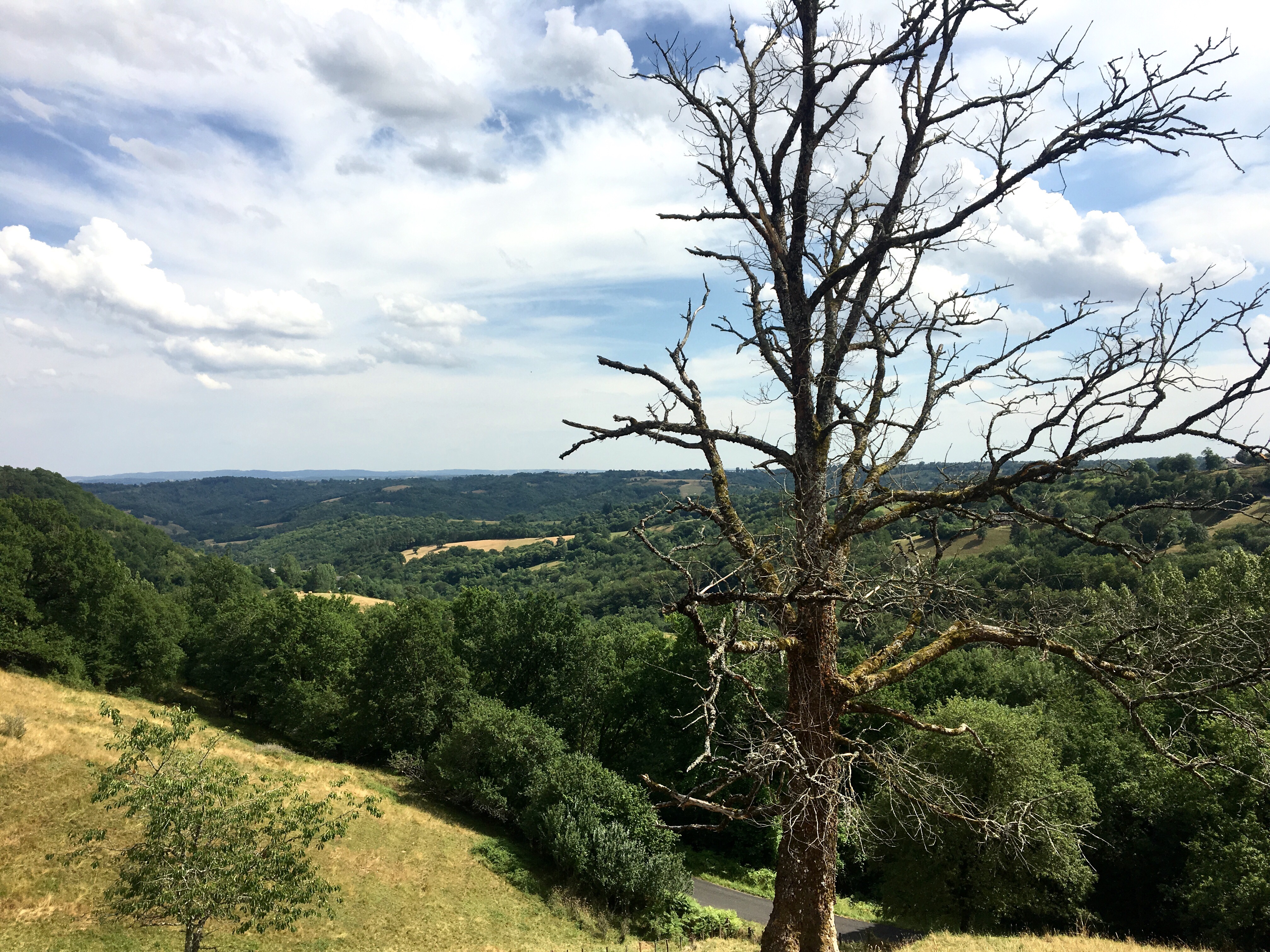 Back in Estaing, Mario had picked up grocery supplies because the place we were staying in didn’t provide dinner, and when we arrived we found a large house with a small addition where we’d be sleeping. There was a well equipped kitchen and the owner of the house, Caro, made sure we had everything we needed, and brought over a bottle of red wine and a loaf of bread for the morning. There was a friendly dog, a plum tree, and a large tent in the backyard (which would have been a pretty cool place to spend the night but a storm blew in and I was happy to have chosen to sleep indoors). 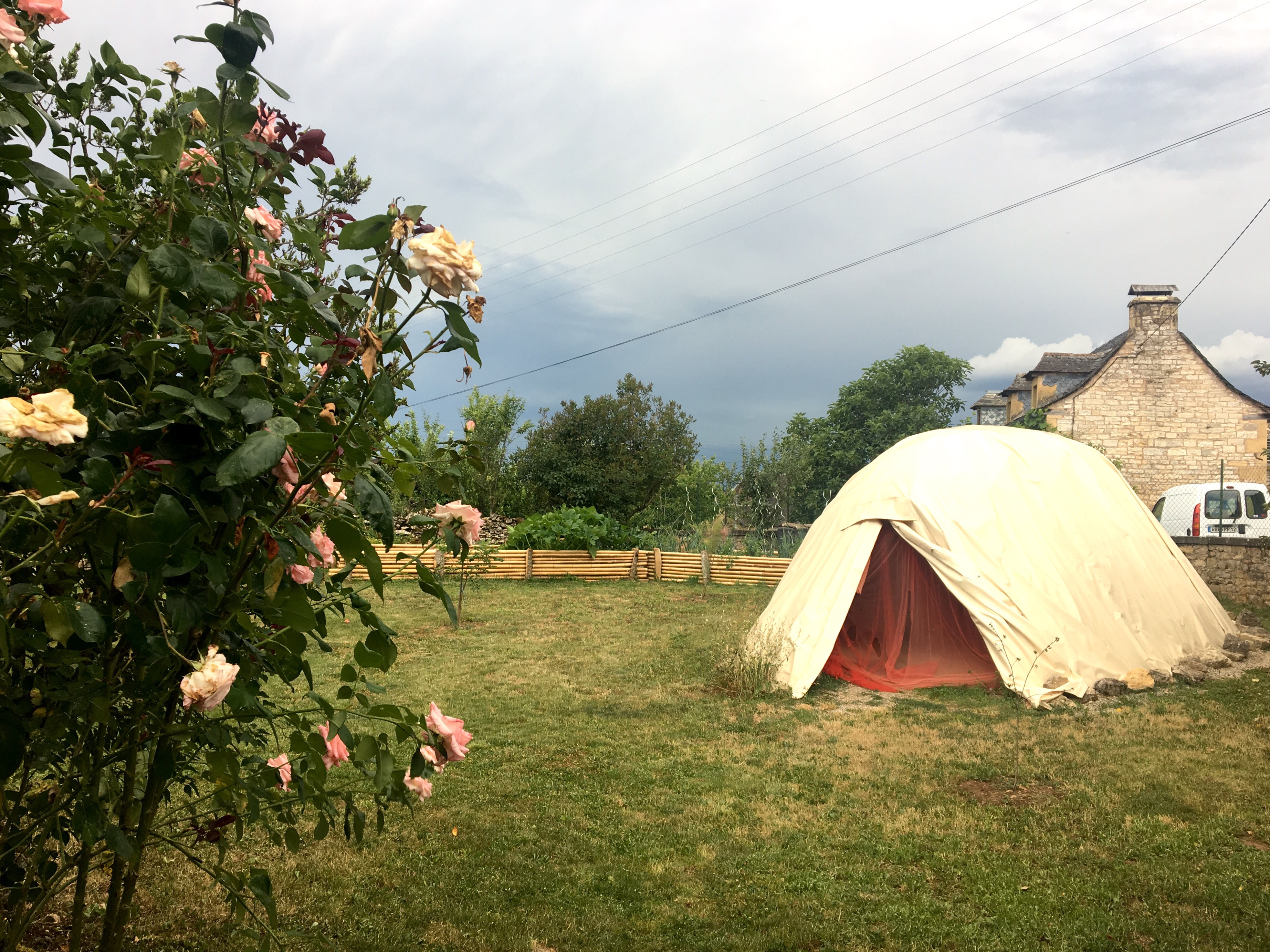 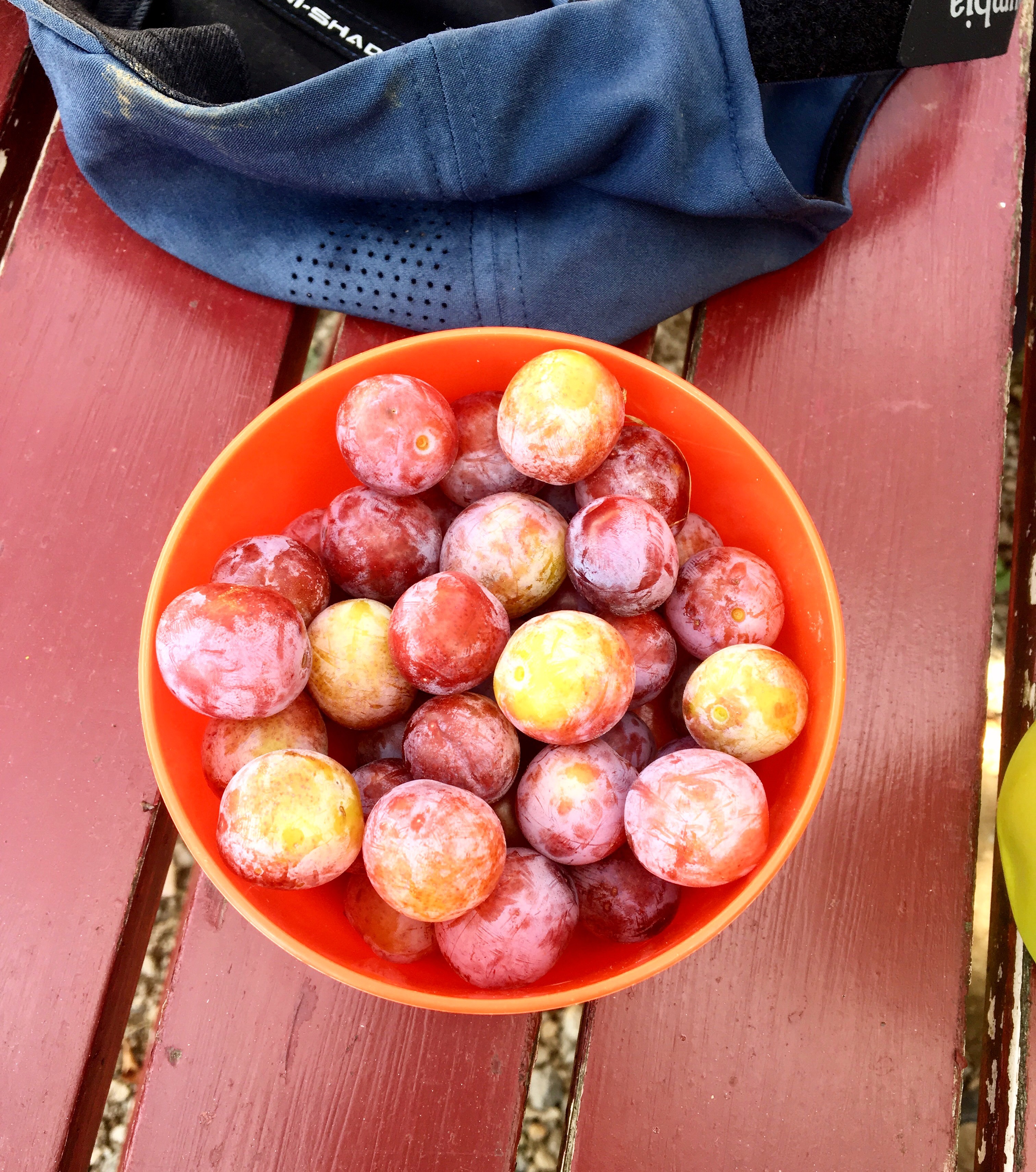 Mario had picked up four bottles of beer while we were in Estaing (he chose a kind that he thought I would like, noticing that I’d mentioned I wasn’t much of a beer drinker. Once again, more proof of the kindness and generosity of the French!), and we shared it with Caro while he and Mario talked about their philosophies of life. I didn’t feel quite as frustrated that I couldn’t completely follow the conversation- and it might have been because Caro’s accent was easier for me to understand (or maybe my French was improving??)- and if anything I really enjoyed listening to the guys talk. After Caro left we made a late dinner- I chopped veggies while Mario threw together a stir fry, and we talked about the reasons that we were walking, the questions in our lives, the things we believed in.

At the end of the night I felt like I had made a friend. A real, true friend and even though it didn’t solve my ‘walk alone/walk with others’ dilemma (oh just wait for the next post), it only reaffirmed my feeling that I didn’t need to figure everything out. How would I spend the rest of my walk? In that moment, it didn’t matter.

Because I had spent my day well. 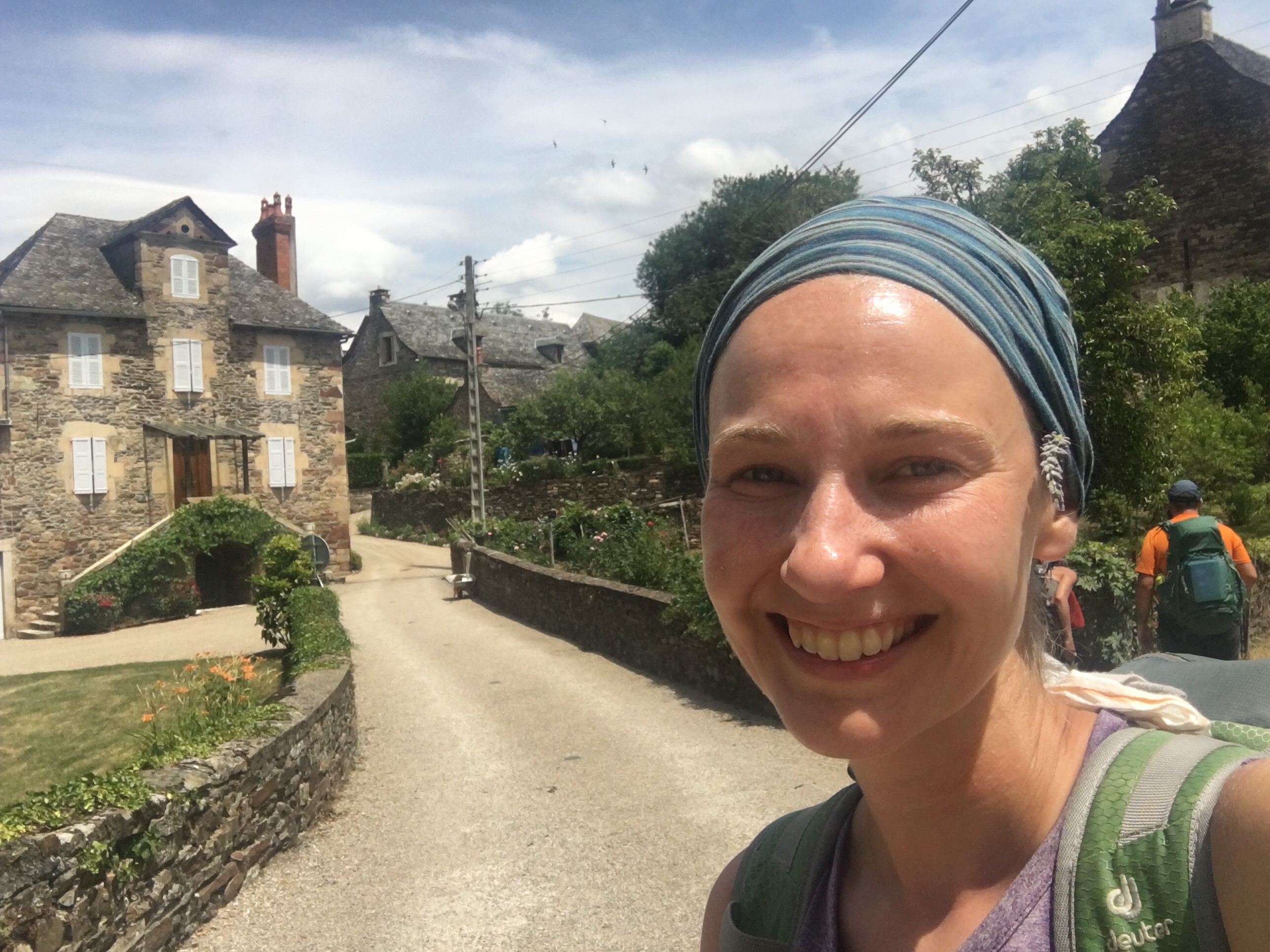