And we’re back on the Chemin du Puy! These blog posts sure are rolling out slowly (is anyone still reading? Wait, forget I asked, because the answer doesn’t really matter; I think I’d probably write out these recaps even if no one read them. I love revisiting my walks!).

But already the Chemin feels awfully long ago, and the details are becoming a little hazy. That became really clear when I started to think about how to write this post, and what to say about Day 7. Sometimes I use my journal entries to trigger memories from the day, but there’s no journal entry for Day 7. I looked at my photos, and while this helped, nothing really jumped out at me. It was a mostly gray day, there were some nice looking trees, and at one point I had a decent view of a town I’d passed through from across the valley. 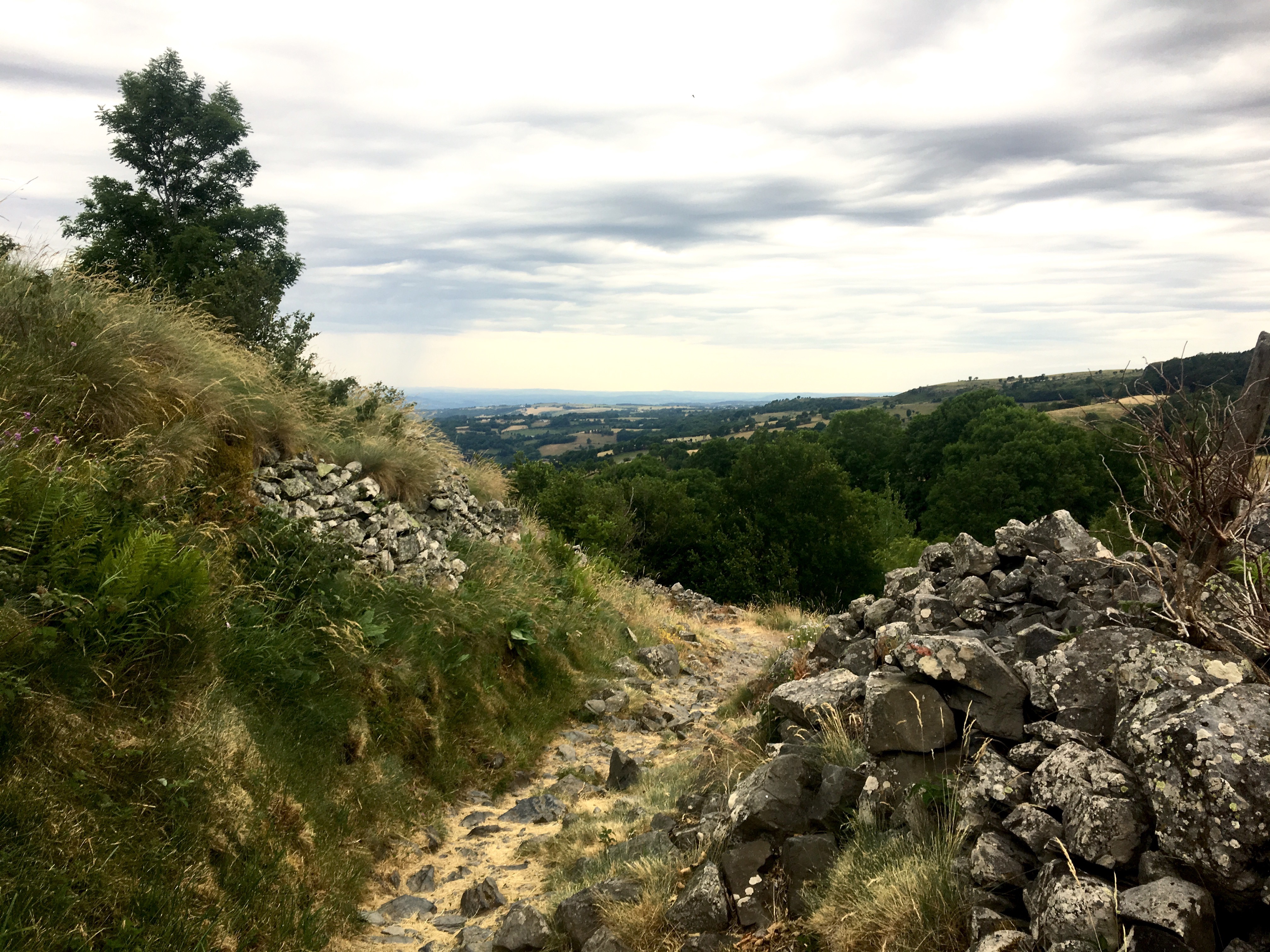 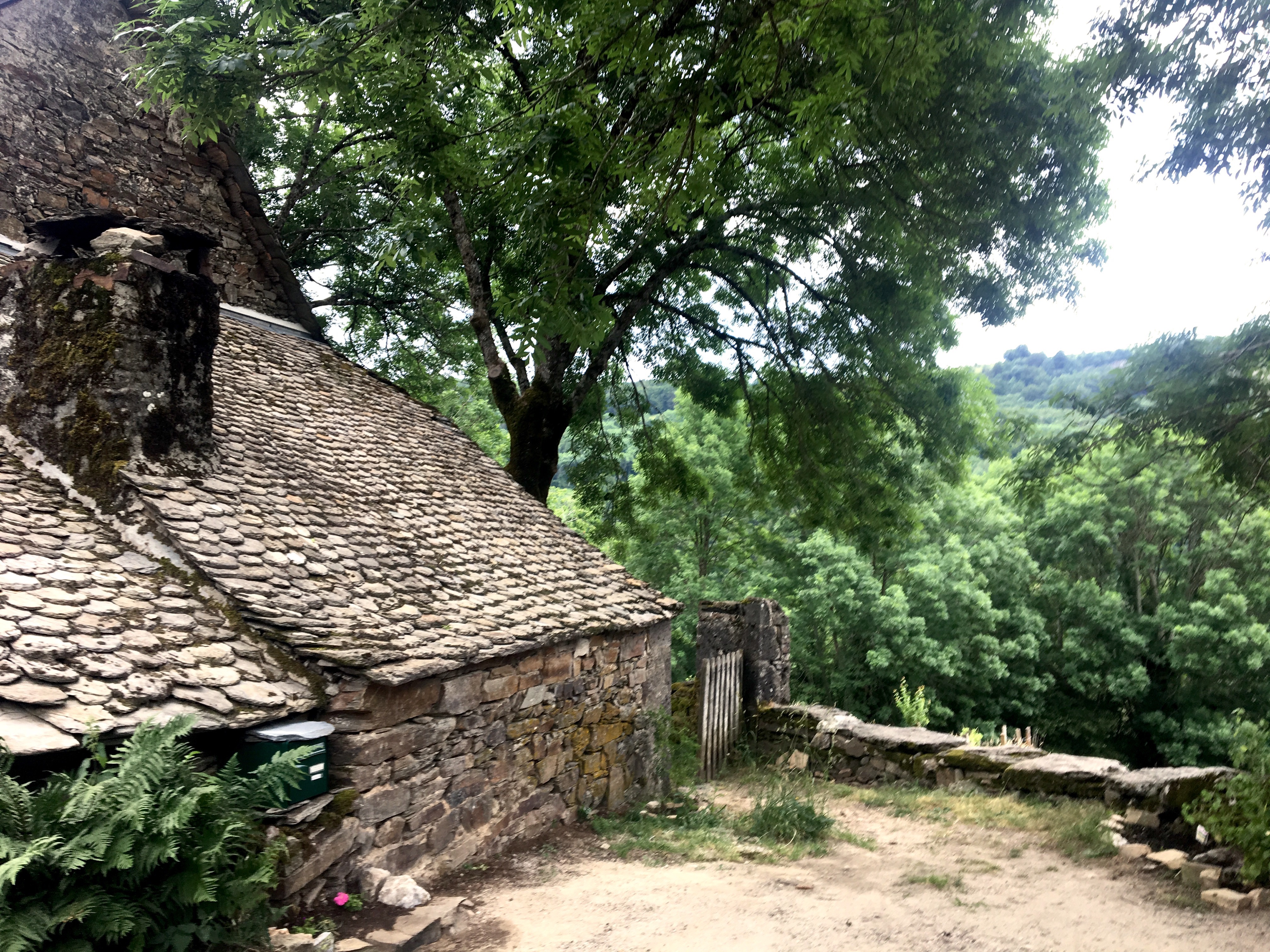 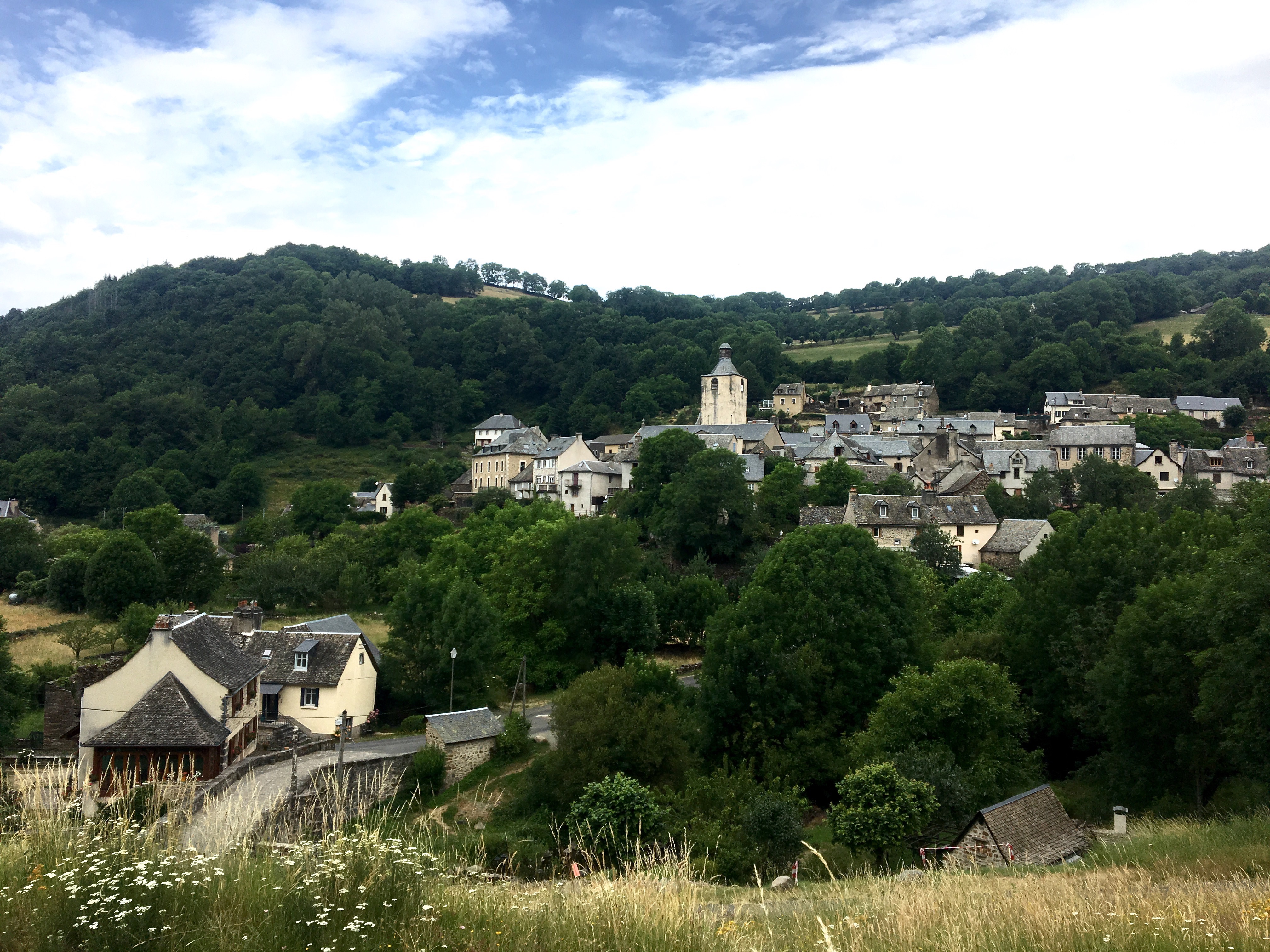 Was the walk easy or hard, did I encounter anyone interesting, did I have any conversations, what did I eat? How was my mood- was I feeling energized and happy, or was I feeling a little off and a little slow? 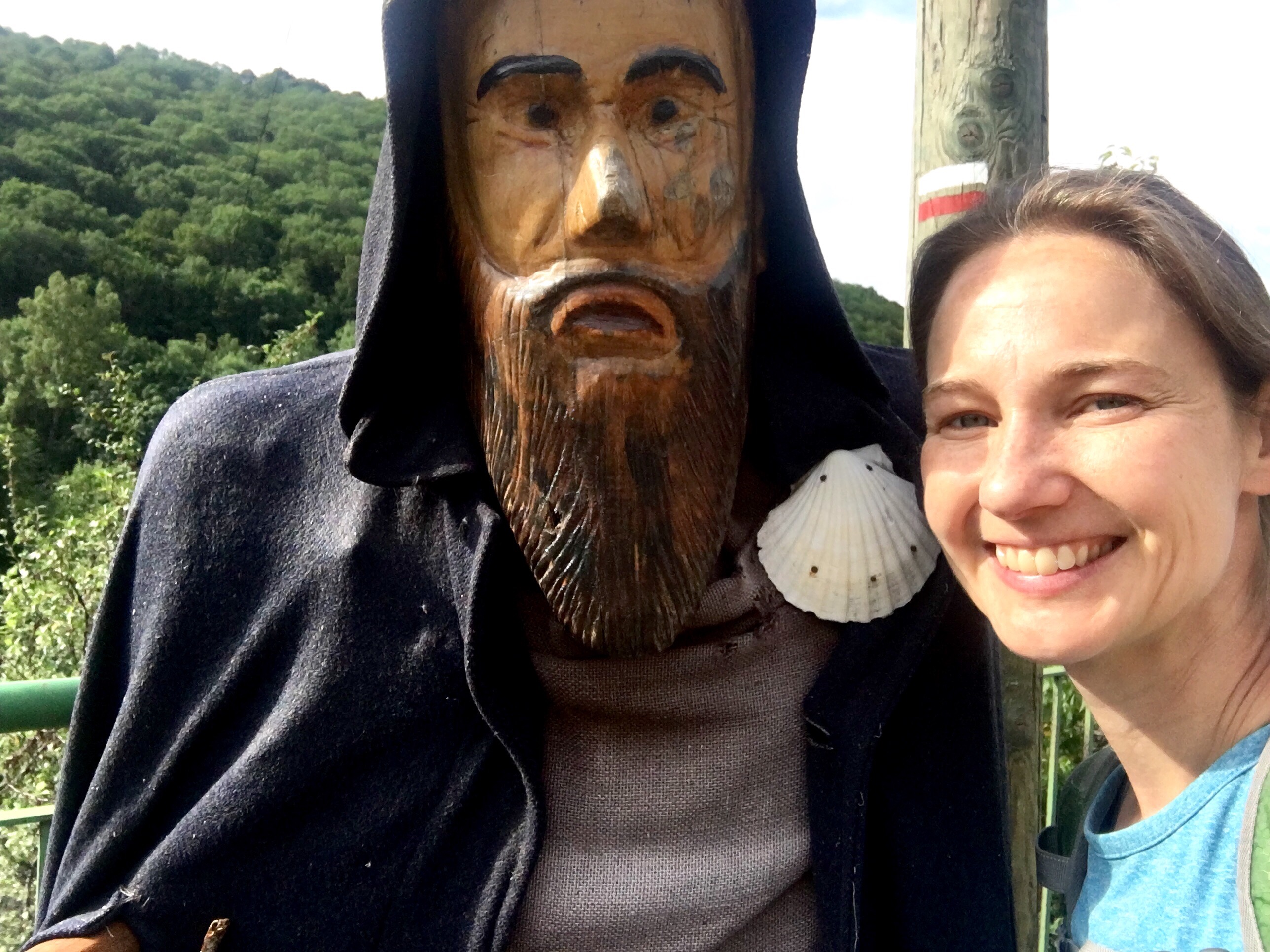 I met this interesting guy…

I look through the photos again: ah, parts are coming back now. I remember that as I walked into a town, I saw a small rainbow in the sky, and it made me so happy. I had a coffee in that town, too, a café crème and I must have been in a café on the outer edge of town because there were no other pilgrims there, and no one passed by. 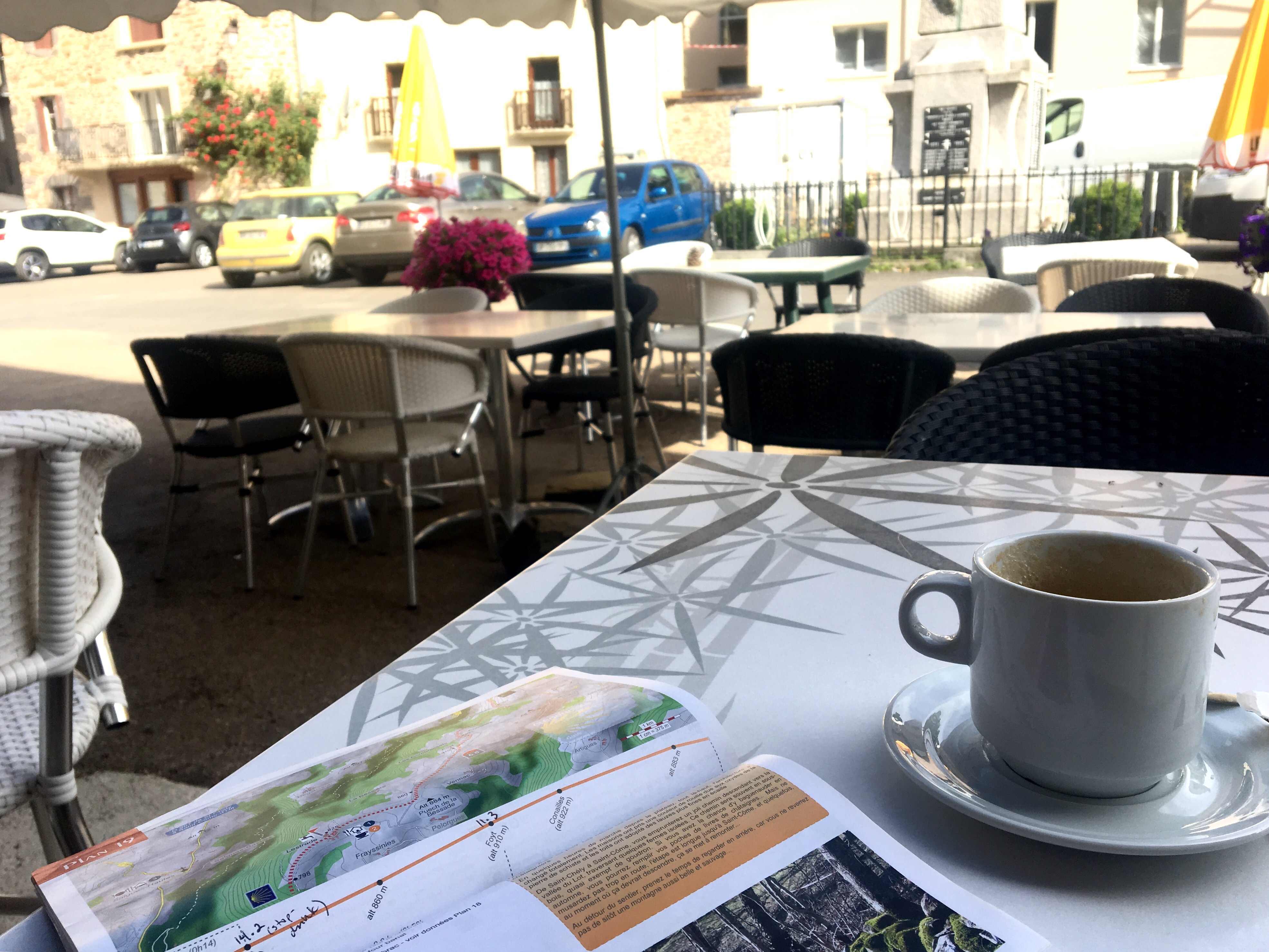 Later in the day, I stopped at a small shelter, this little covered space that had a round wooden table filled with the types of things that pilgrims might want in the middle of a long day. A carafe of coffee, a jug of orange juice. There was a register to sign our names, and benches and chairs to rest our feet. Jerome was here, the French man who’d been at our table last night, and again he was smiling and laughing and talking to everyone. There was a group of French women, and then another solo French woman and I said hi but kept pretty quiet. I remember that I’d wanted a break, but also that I felt like being alone. 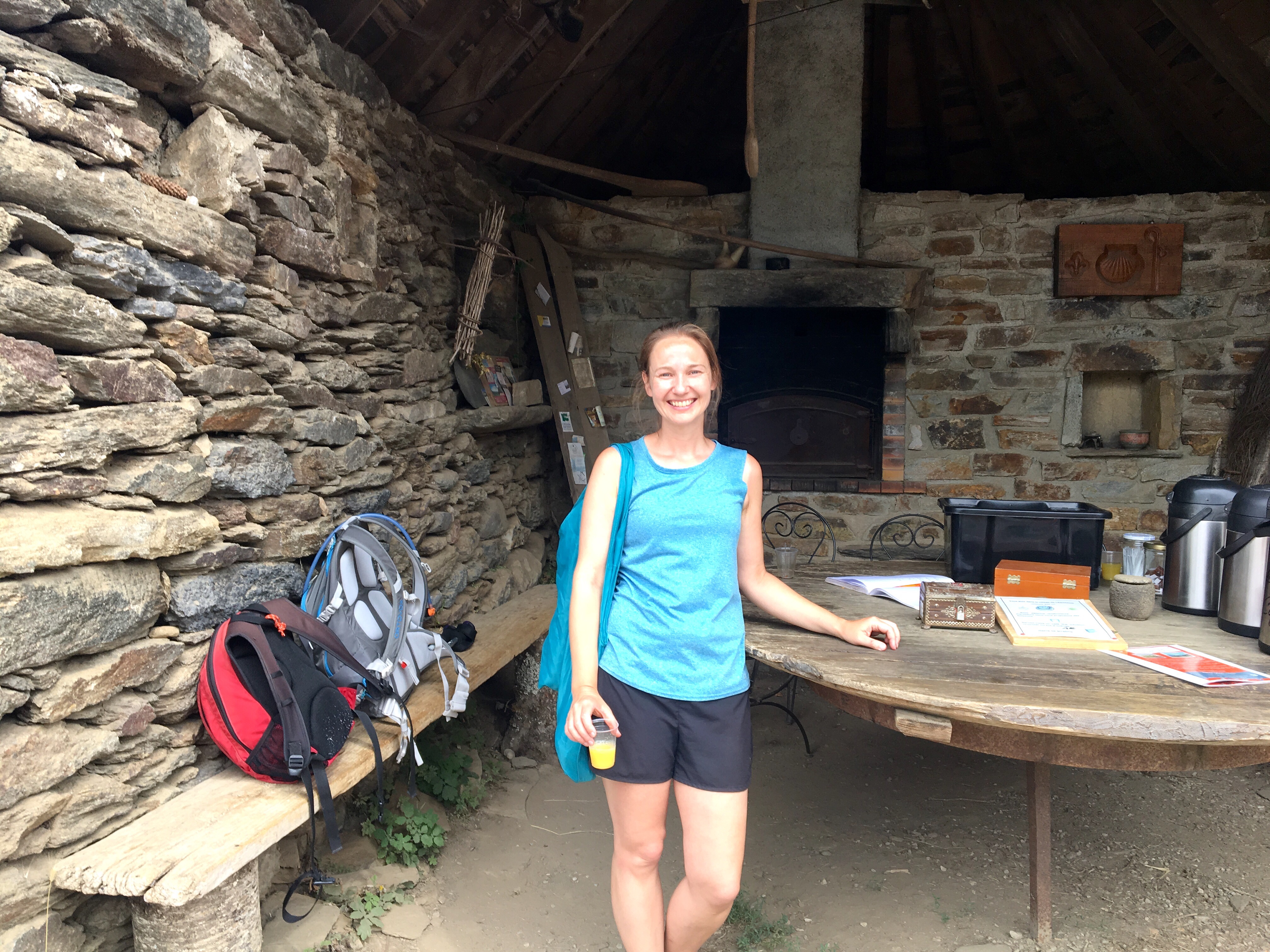 There’s a small story that goes along with this photo (I told it over on the Instagram account for Nadine Walks, and if you follow that link you can get there and see other photos from my walks). So, I was snapping a few photos of the shelter area when one of the French women motioned for my camera and told me that she was going to take my photo. I didn’t protest, and stood sort of awkwardly by the table. But as soon as the others saw me getting my photo taken, they began to get out of the way. “No!” the French woman called out. “It will look sad if she’s in the photo all alone!” I said something in French, I think I was trying to say that I didn’t want anyone to be bothered or feel like they had to move, but I think what I’d actually said must have been something along the lines of: “Yes, please, I want to be all alone and sad in this photo” because everyone continued to move out and wait until the photo shoot was done so they could move back in.

I’m laughing a little at this now, but I remember at the time feeling frustrated that I couldn’t communicate as well as I wanted to, and just not feeling at ease around the other pilgrims I was meeting that day.

But this has been a pattern over all of these walks, hasn’t it? Some days I know that I want to be alone, and after hours of walking solo, it’s hard for me to readjust and be back around other people.

Speaking of being back with other people, towards the very end of the day I ran into Mario. I saw him from a bit of a distance, sitting with an older man at a table of another little pilgrim rest stop. He was wearing his bright orange shirt- that, along with his dark beard, made me recognize him. I hadn’t seen him since the morning of Day 2, and I assumed that I’d never see him again. He was walking big days, and I imagined that he would have been far ahead at that point.

I hesitated just a moment before going over- I was still feeling a little off and not exactly in the mood to do much talking- but I shook the feeling away and went over with a big smile. To this day, running into friends unexpectedly is one of my very favorite things about the Camino. I think sometimes we are meant to meet people again. 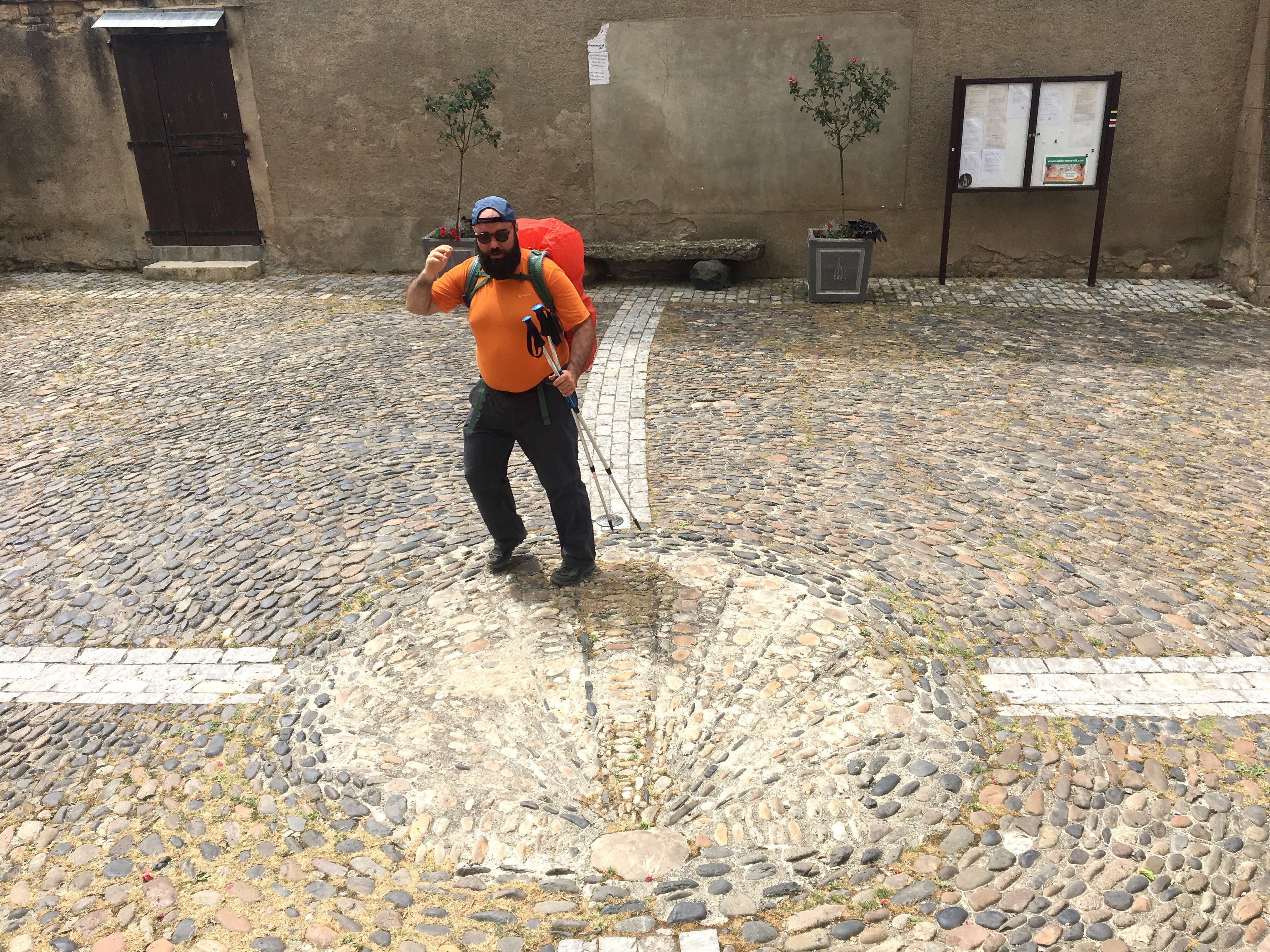 When Mario saw me he sat up with a start, and soon a big smile of his own was covering his face. “I didn’t think I’d see you again!” he said, his voice both happy and a bit incredulous.

It turns out that we’d both booked beds in the same place that night- Gîte L’Antidote. I took a closer look at my guidebook and realized that our Gîte was actually on the outskirts of Saint-Côme-d’Olt, and that I wouldn’t get to stay in the town at all. And once we arrived in the town, I could feel my heart sink a bit. It was such a beautiful place, with winding cobble-stoned roads, charming squares, fountains, the works. I saw Nassim and a few others from the day before and they were all staying in the municipal Gîte, and suddenly I was sad that I wasn’t there, too. I was missing out on a great town, and I worried that- even with Mario- I was going to feel a little isolated at our Gîte on the outskirts. 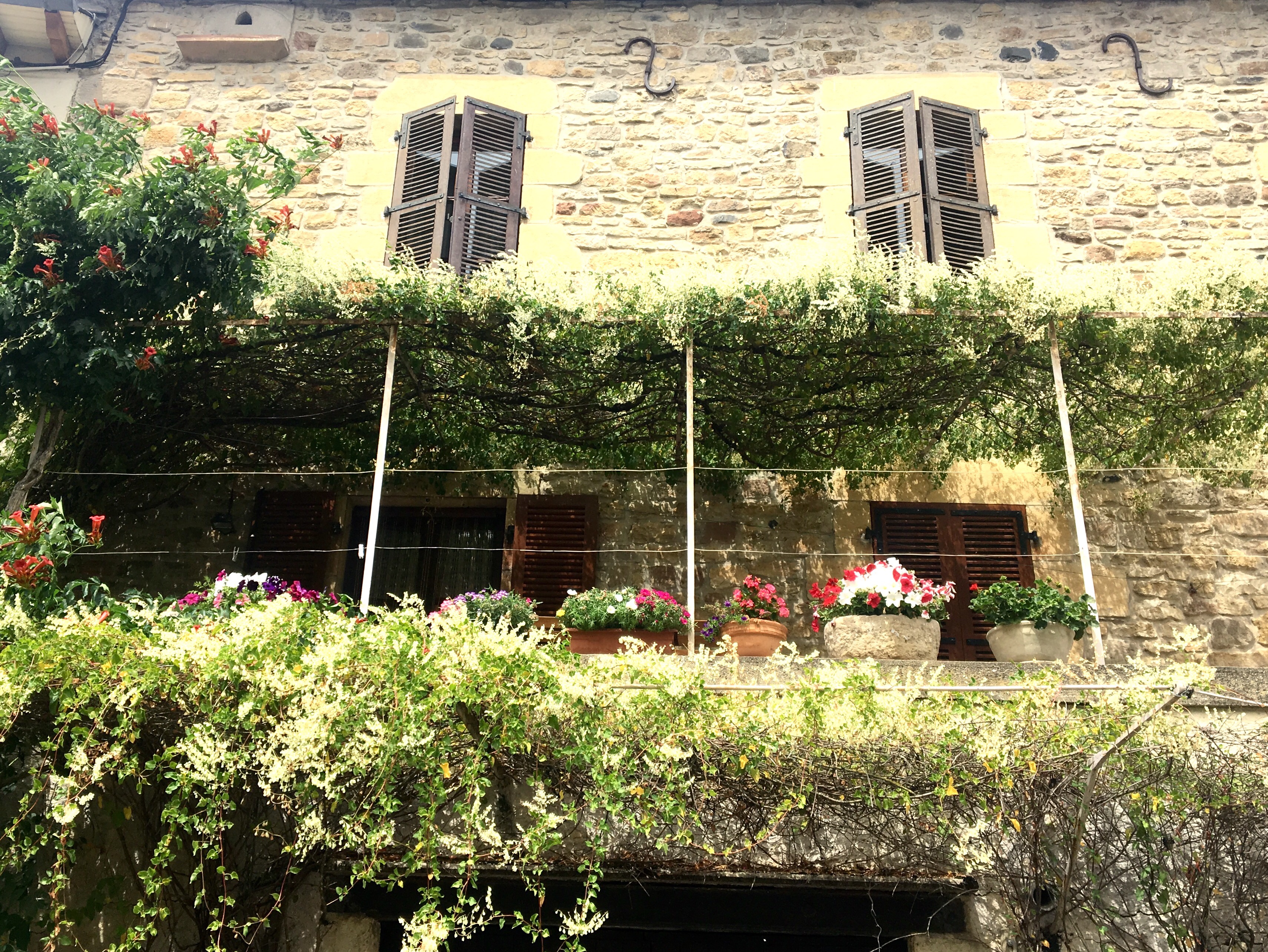 In the end, it was yet another very different kind of Chemin experience. We had a little trouble finding the Gîte- it was in a residential area and we must have come from the wrong side because we completely missed the signage. And soon I realized it was in a residential area for a reason: we were in someone’s residence. I suppose it was a little like the place where I’d last seen Mario, the Gîte on the outskirts of Saint-Privat-d’Allier, where we stayed in a lofted attic area of someone’s home. 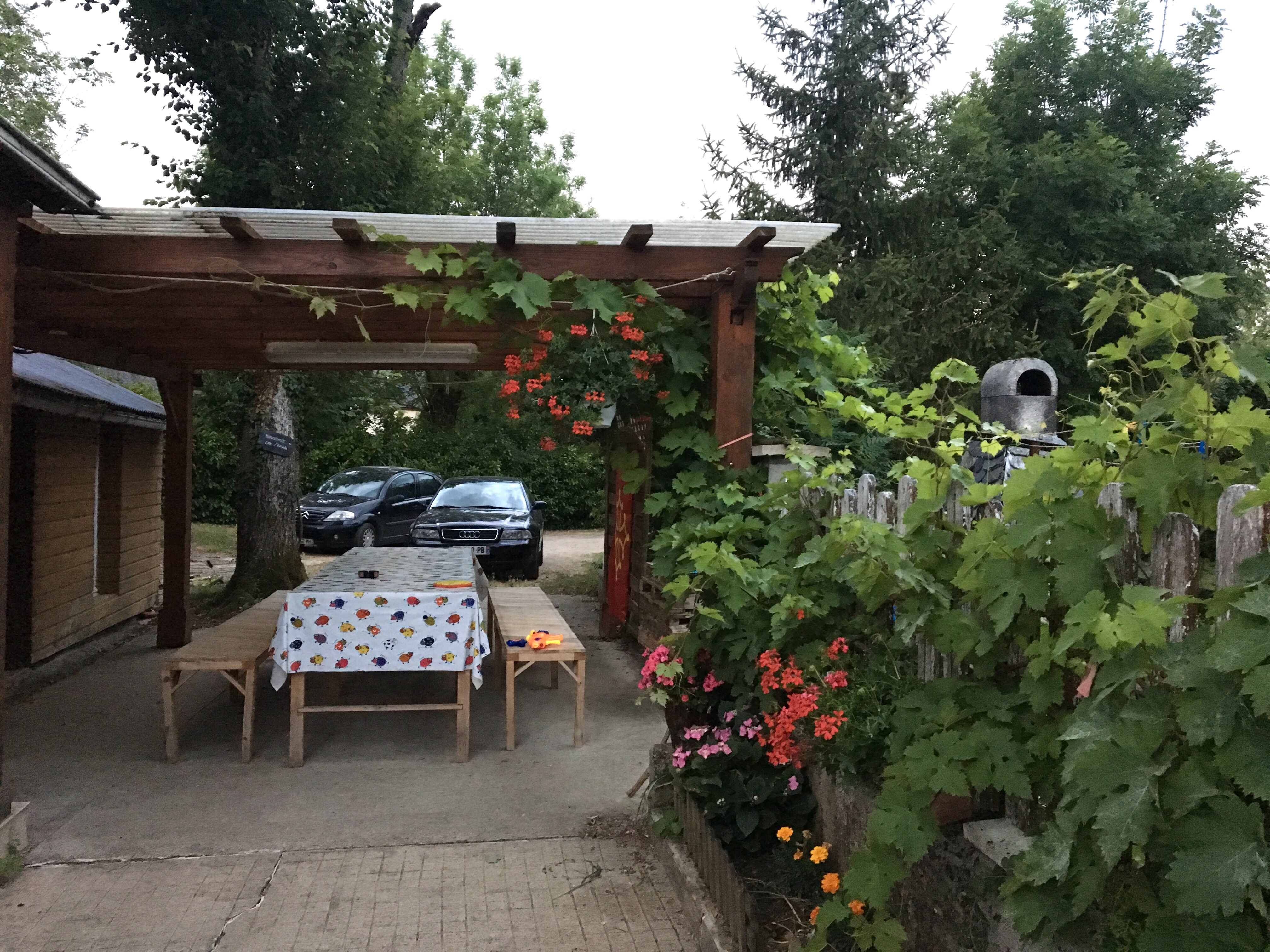 It was a similar thing here; Laurent welcomed us and after nearly an hour sitting outside and drinking syrup water (all I wanted to do was go inside and take a shower but the other two seemed content to sit and talk), we got the tour. He pointed out his son’s room and asked that we not go inside, showed us the bathroom that I can only assume was also used by his family, and then we went upstairs to the attic, where there were 8 beds spread across the room. 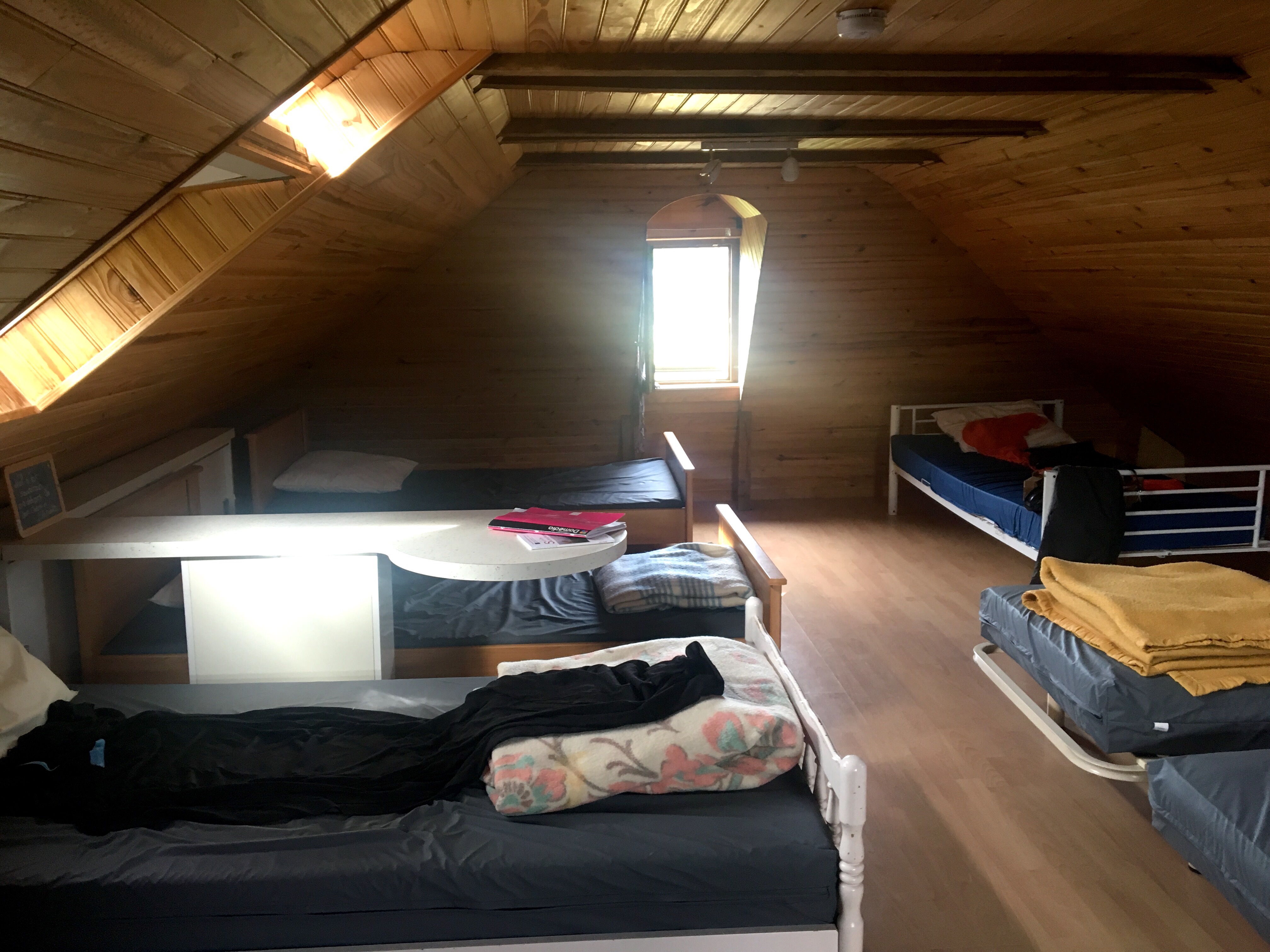 It turns out that Mario and I were the only ones staying there that night, and dinner was the two of us plus Laurent and his wife. We were all in our 30’s, sitting around a table outside, eating salad, and stew, and drinking wine and talking and I didn’t feel like I was on the Chemin at all. Or, maybe, it was a different kind of Chemin, maybe it was even more in the spirit of what the Camino used to be like, hundreds of years ago, when pilgrims would knock on a door and hope to find a bed for the night, maybe a little food, too.

But, as usual, I couldn’t appreciate the situation fully because of my French skills. Mario was really good at sometimes translating things for me and making sure I wasn’t totally in the dark about what was going on, but it was still a little frustrating. I wanted to understand everything, I wanted to talk more, I wanted to understand more about these people and why they have opened their home to strangers. I wanted to know more about their son, a three-year old boy with fine hair that curled against his neck, who was running around the yard, shouting and waving his water gun and getting dangerously close to our clothes that were drying on the line.

That night, as Mario and I sprawled on beds on opposite sides of the room, we started air-dropping photos to each other. “Here’s a good one!” Mario said, and ping! A photo of the lake he’d swam in yesterday appeared on my phone. “And here’s a photo of sunrise on the morning when I’d last seen you,” I said, and for the next 20 minutes, photos zinged back and forth across the room. We started laughing- Mario accidentally sent me a photo that I’d sent to him a few minutes earlier, and then we started laughing harder as we realized that our heads were sinking into the plastic covering of our pillows and that it was actually the most uncomfortable thing ever.

We giggled in the dark and all I could think was how strange it is to walk a Chemin, or a Camino. I could walk alone all day and feel a little out of place- the sad girl alone in a photo- but then find myself in the attic of someone’s home in the middle of France, laughing with a new friend, joking like we were children.

So, Day 7 was complete, I was halfway through my adventure on the Chemin du Puy. (What does the next half bring? Hopefully I’ll get these posts out a little more quickly, but here’s a sneak peek: RAIN).