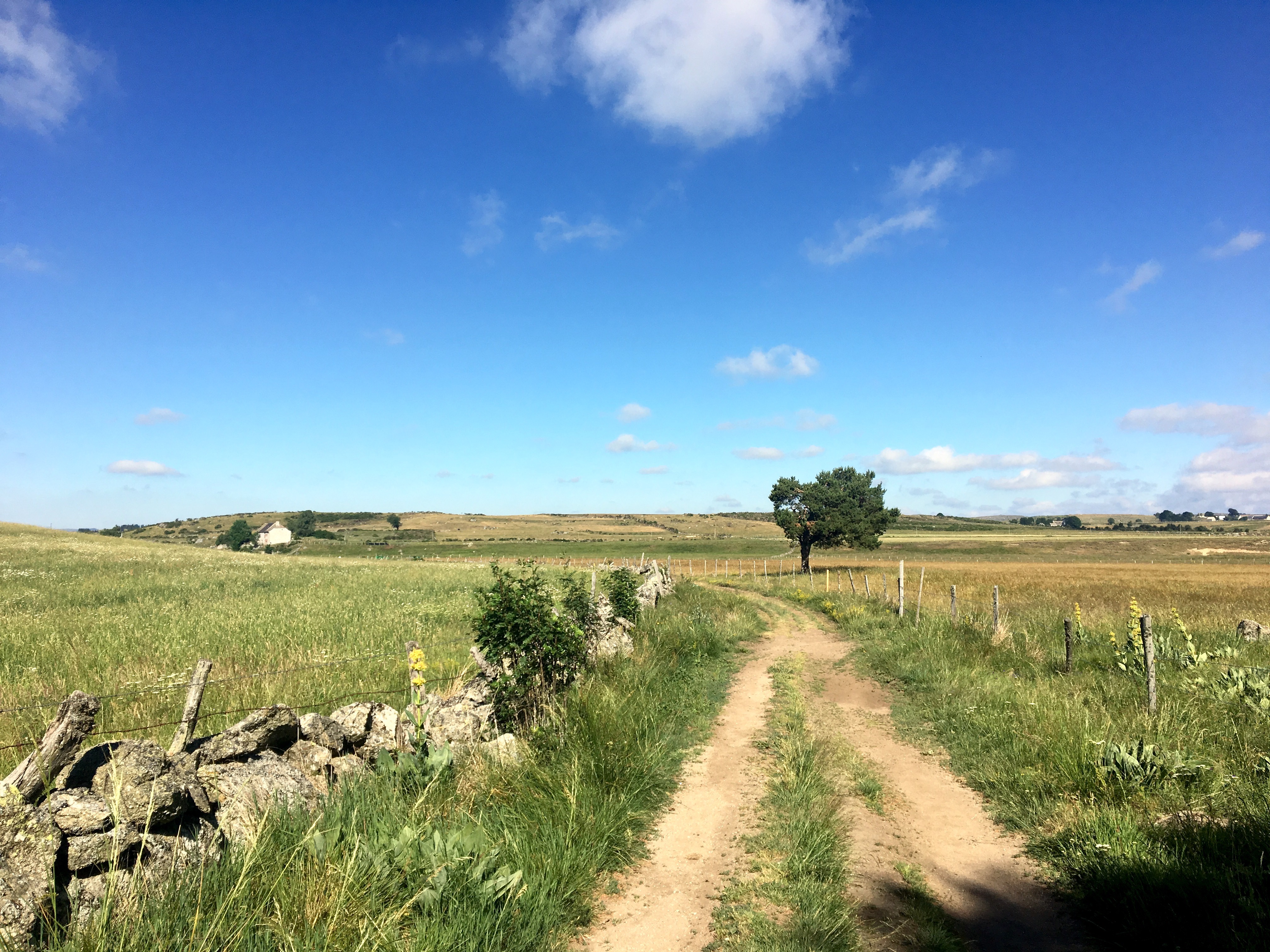 The day before had been a short one- only 8km! To balance things out a bit I countered that with a 36km day and even though this is a distance I’ve done before (many times, by now), I was just a touch nervous. Now I’m not even sure why, but I suppose it could have been because I had been doing much shorter days up until that point. And I was “in between” things, at least it felt that way: everyone I’d met in the previous 5 days was ahead of me, and I knew that my long day would probably catch me up, but I wasn’t sure. Two years before, when I walked the Camino del Norte, I’d somehow gotten myself very off stage and was in a strange “in between” zone for about 3 days. I’d met tons of great people over two weeks of walking, but suddenly I was alone in albergues and seeing no one on the path, and I guess I didn’t want a repeat of that here, on the Chemin.

After another breakfast of toast and yogurt and fruit and coffee, I set off. The morning was clear and blue and cool. It was the most beautiful morning so far, and I think I must have walked with a smile on my face. I passed churches and little stone chapels, fields of sheep and lines of cows. 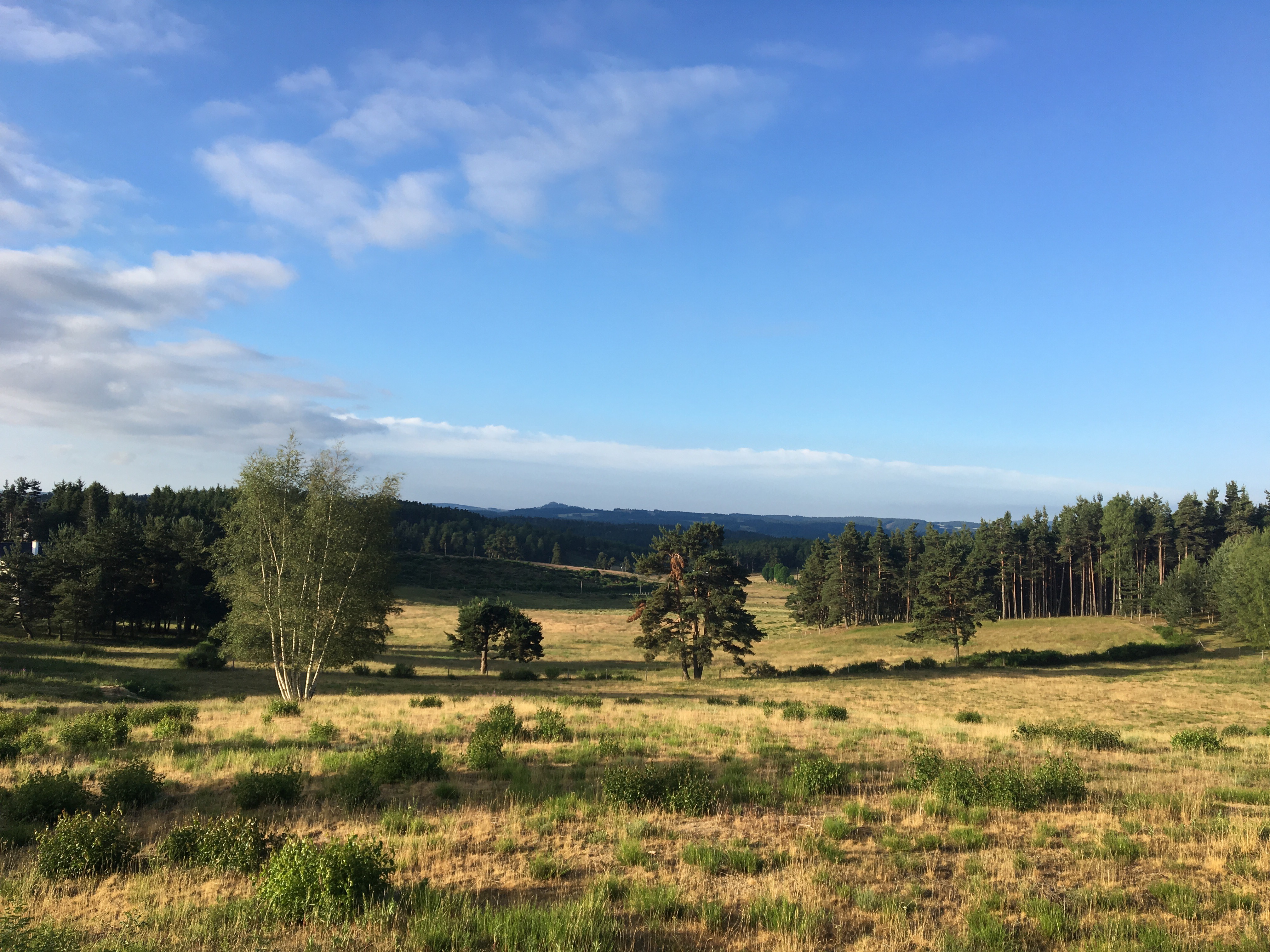 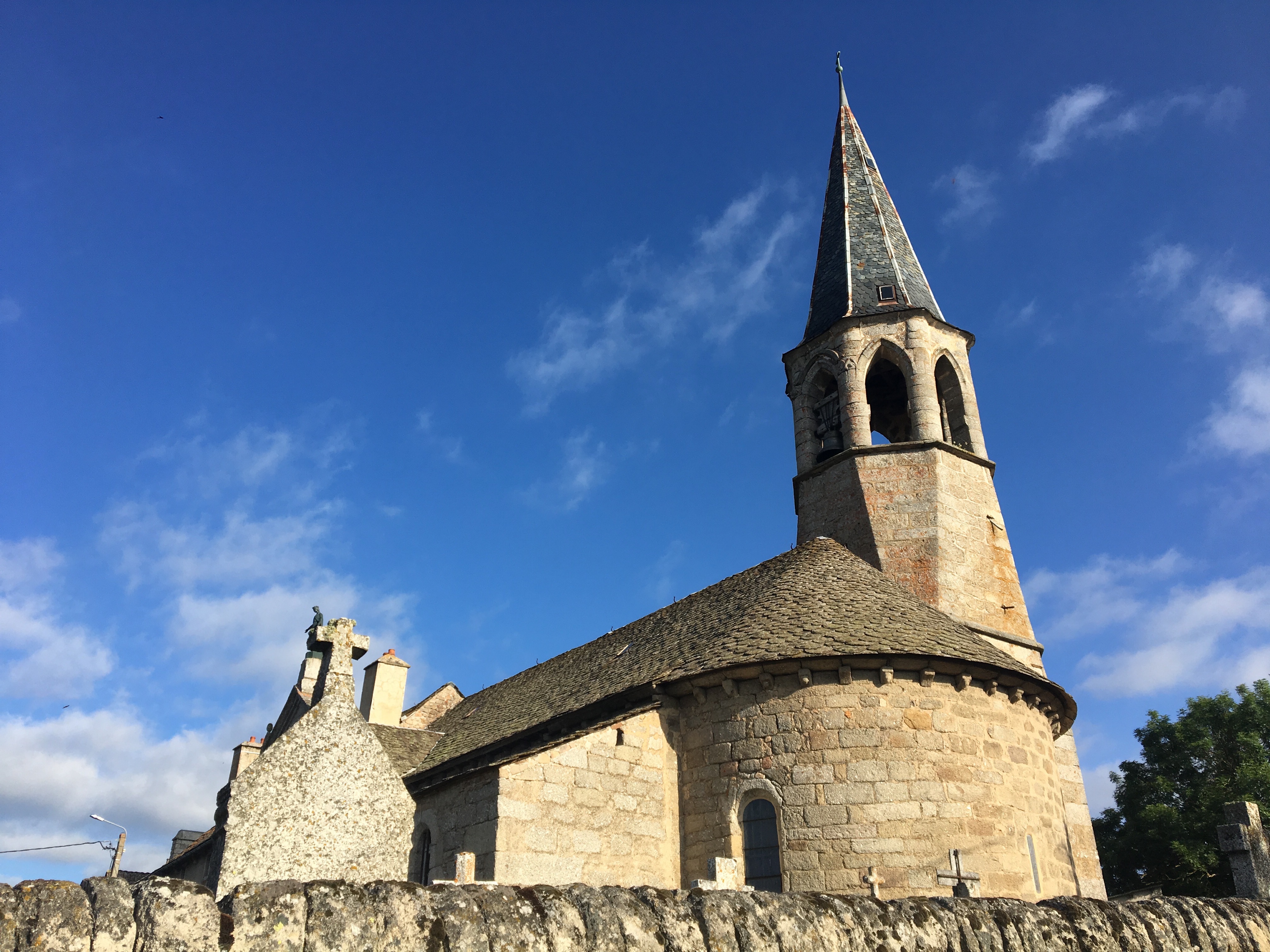 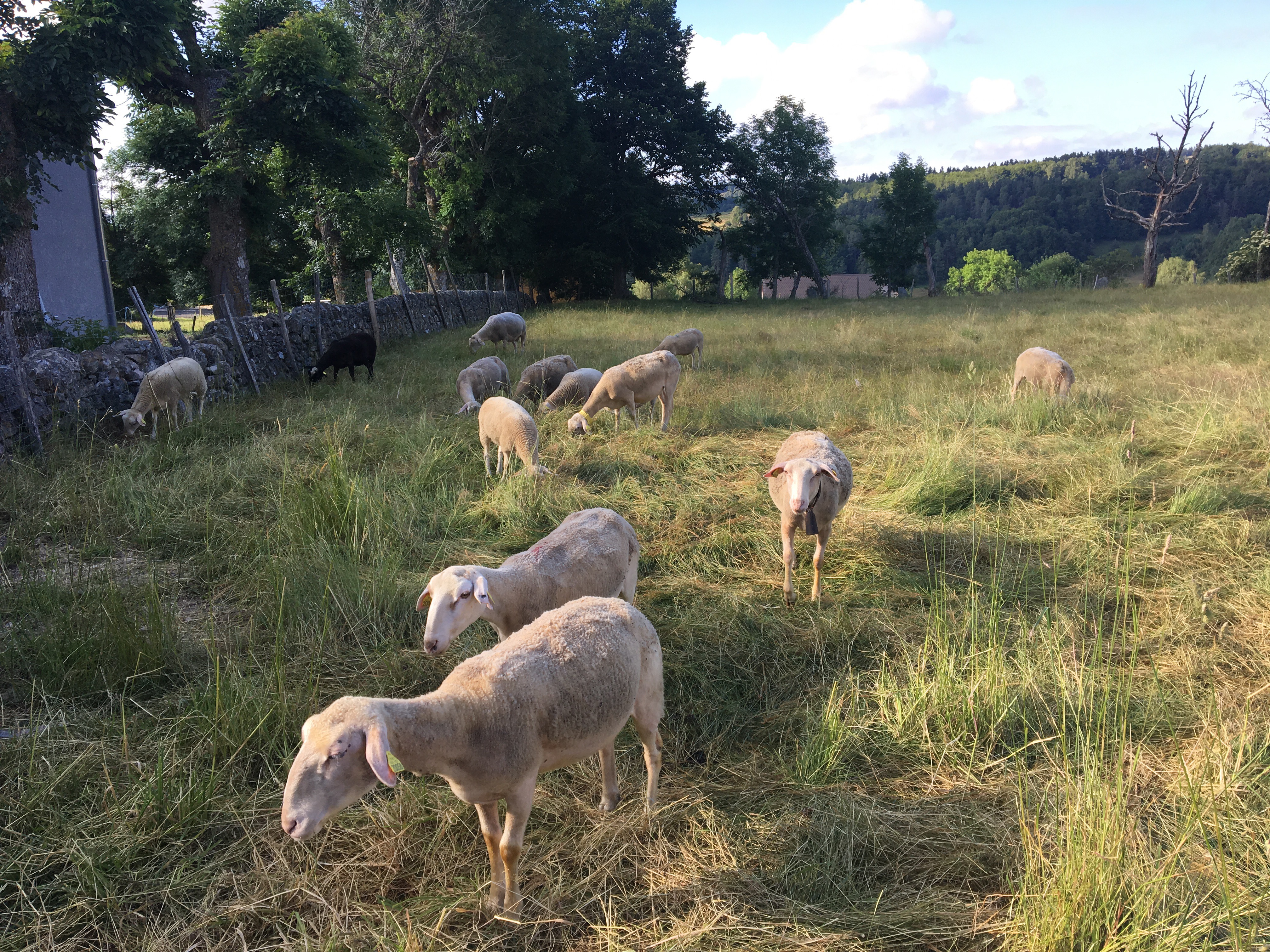 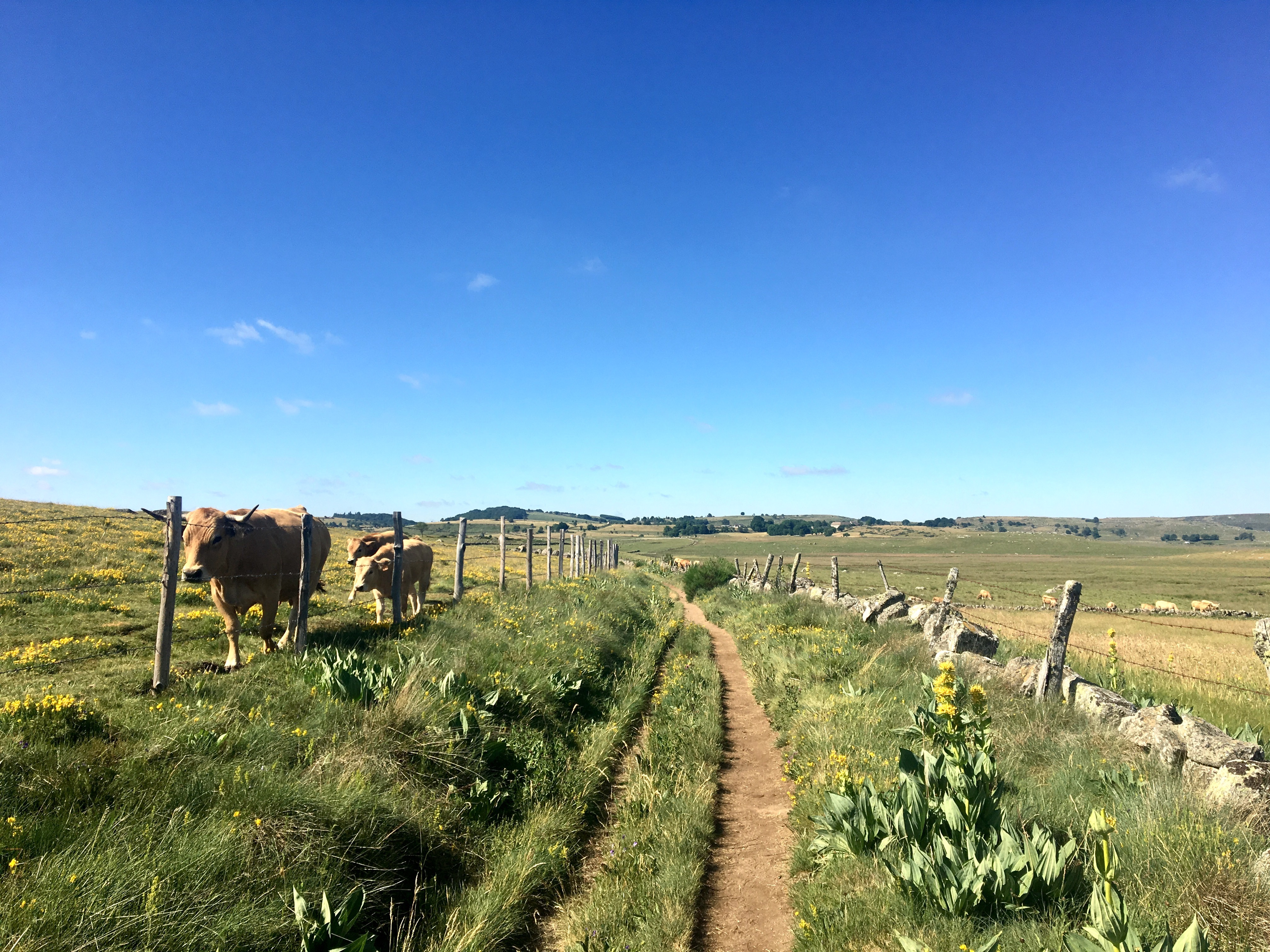 I was walking through the Aubrac Plateau, an incredibly unique and- for me- completely unexpected landscape of the Chemin du Puy. It also had a special kind of energy, and I wasn’t the only one who thought so. Later, I would hear pilgrims say that it was their favorite part of the walk (mine, too), that some could feel great weights being lifted from their shoulders, others could do nothing but cry under the great and open sky.

There is a bit of a mystical legend associated with the area; in 1120, a pilgrim named Adalard was on his way to Santiago and was attacked but, surprisingly, was left unharmed. Because of this he vowed to build a monastery on the site, so that future pilgrims could find a place of safety and comfort. He did build the monastery- the Dômerie of Aubrac- and the friars decided to clear the forested land around it in order to breed sheep, for cheese (these sheep eventually gave way to cattle, which are now famous for this region). And this land, cleared by the friars of a monastery built by a pilgrim in the 12th century, remains a plateau: wide and open and expansive and a little wild. 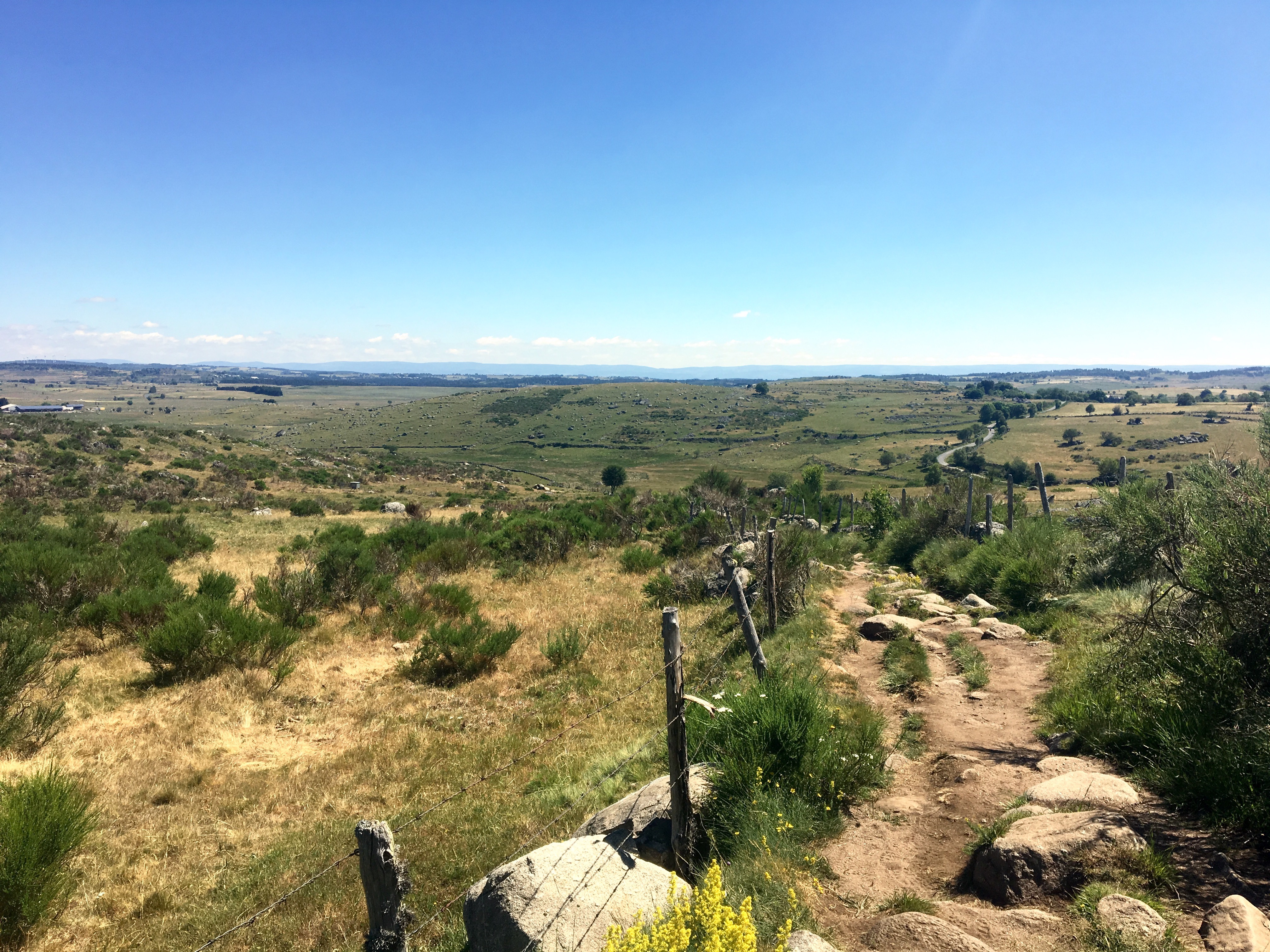 I could feel that there was something special going on in this land. I didn’t feel a great weight lifted from my shoulders or break down in tears; for me it was something different. I smiled. I couldn’t stop smiling, in fact, I was laughing and dancing and spinning in circles as I walked down the trail. I felt so happy out there in the sunshine and under that big, blue sky. My legs pumped with incredible energy and I didn’t want to stop walking. 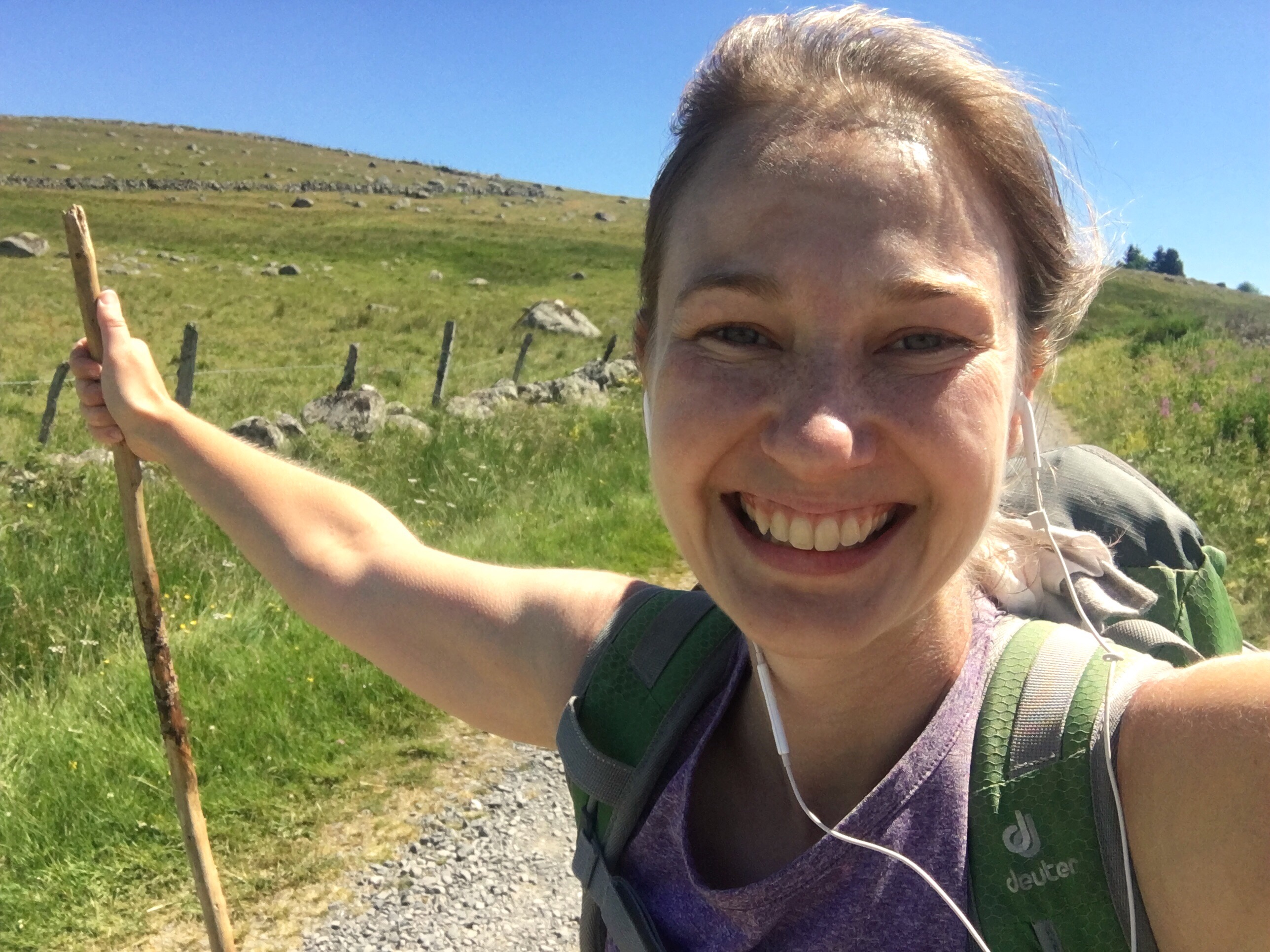 It’s this kind of feeling that I love when I’m on these treks: an unexpected day or moment, when the sun is shining and a wind is blowing and the air feels perfect on my skin. The landscape opens up and I’m all alone, and I’m walking strong and fast and sure. I’m free but I’m grounded, I can see all the way to the horizon and I know that all I have to do, my only task, is to continue walking as far as I can see. 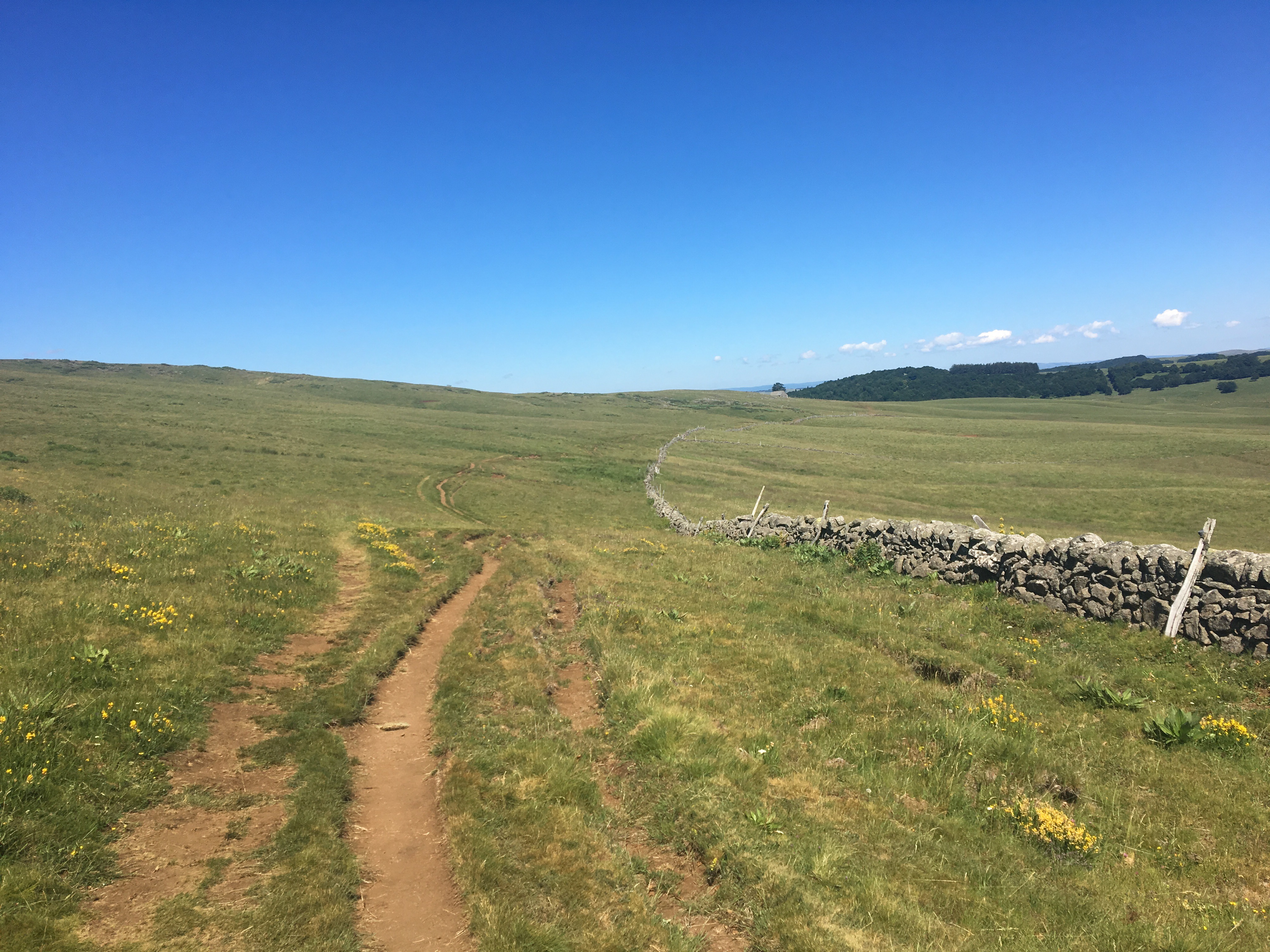 I took a few breaks during the day but mostly I just walked, and walked, and walked. I felt good for nearly the entire day, up until the last few kilometers, and then a little fatigue set in. But soon the path was twisting and began to dip down and further ahead I could see a small village, with a church spire and a few buildings and a tower.

I didn’t connect the dots immediately- not until I walked into the village and stood at the base of the tower and saw other pilgrims. “Oh,” I thought to myself, “I’m staying in something called La Tour des Anglais… but I didn’t realize it was actually going to be a tower.” 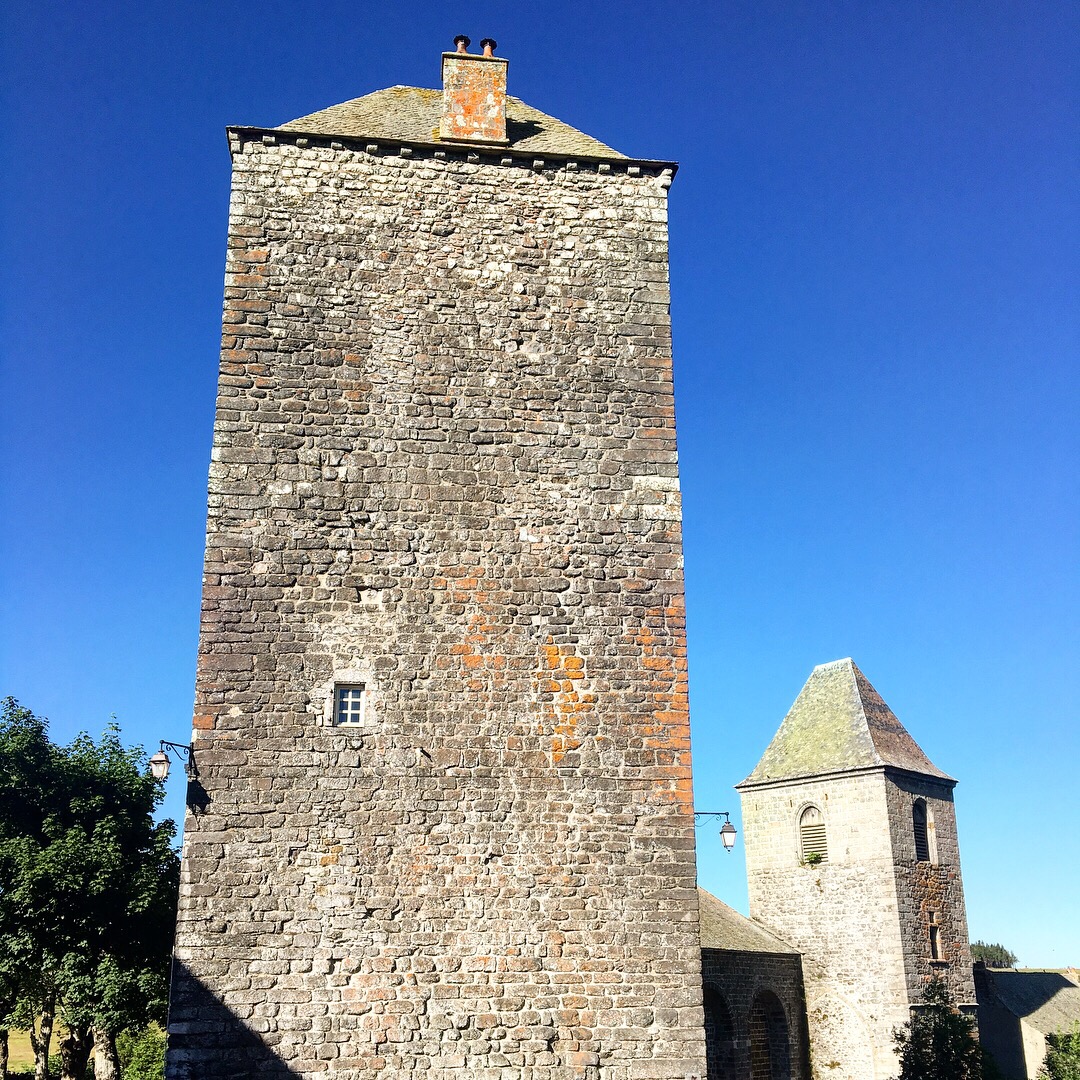 It was. But before I could even step inside I saw so many people that I knew: Nassim (the kind man who gave Hilary and I some cherries a few days before) ran over to me and excitedly told me that he’d seen my name on the list of people staying in the tower, and that I was assigned to a bunk in his room. Then I saw the Quebecois couple, Paul Andre and Chantal, who I’d briefly met at a rest stop. With them was Therese, and coming down the stairs was Marie-Lou. (Aside from Nassim, I hadn’t actually learned everyone’s names at this point- they were all familiar to me but only just beginning to become the people I’d get to know on my walk).

I figured out how to check-in and pay for my bed and dinner and breakfast, and then finally made it up to my room. I couldn’t get over it- I was staying in a tower! A tower built in the 15th century and now serves the pilgrims who pass through on their way to Santiago. I wound up the spiral stairs, into a cavernous room with thick stone walls and picked a top bunk (the only beds left) by the window. I stuck my head out the window: below me were pilgrims milling about, to the left was the church, ahead were fields and countryside. 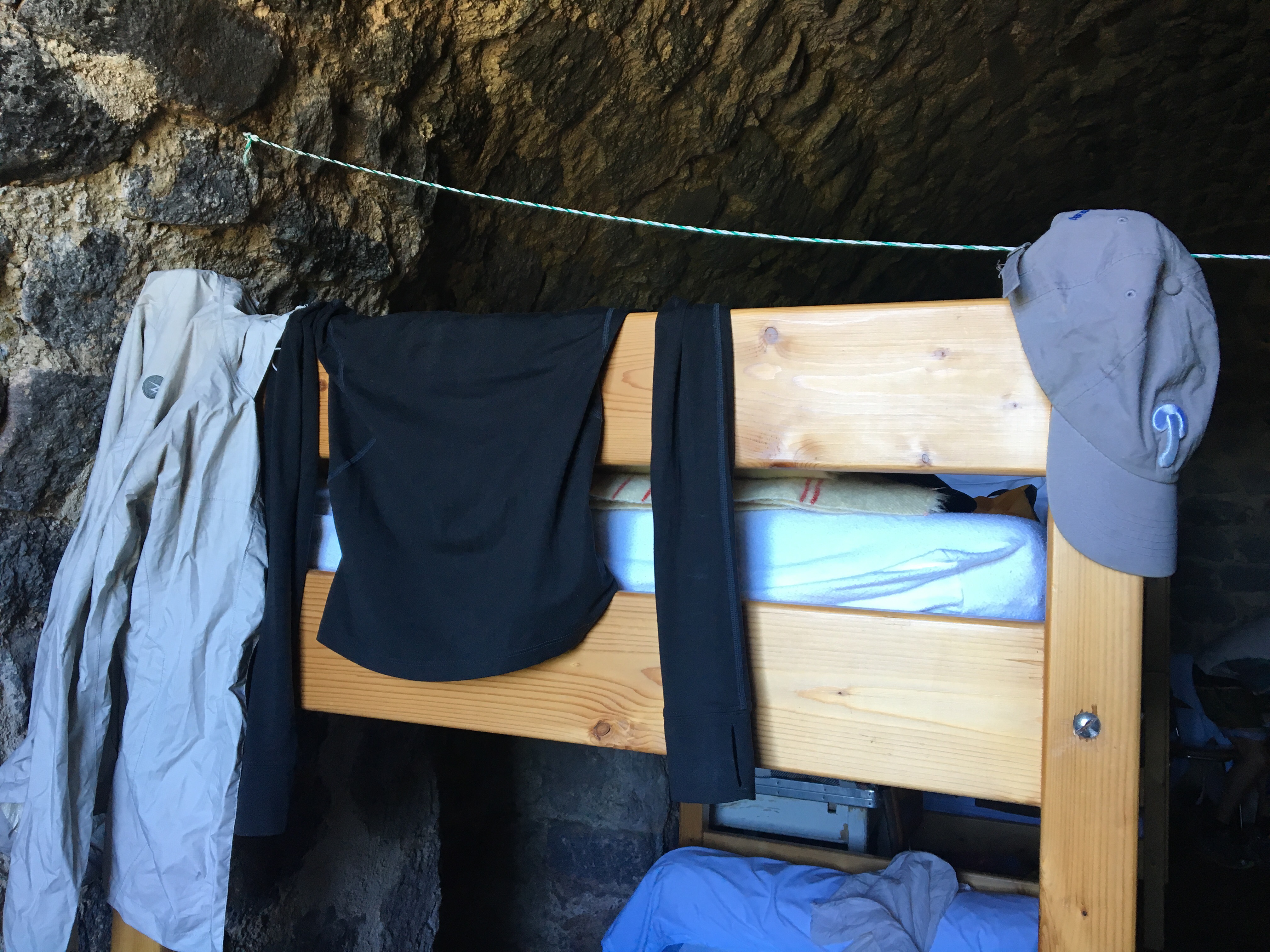 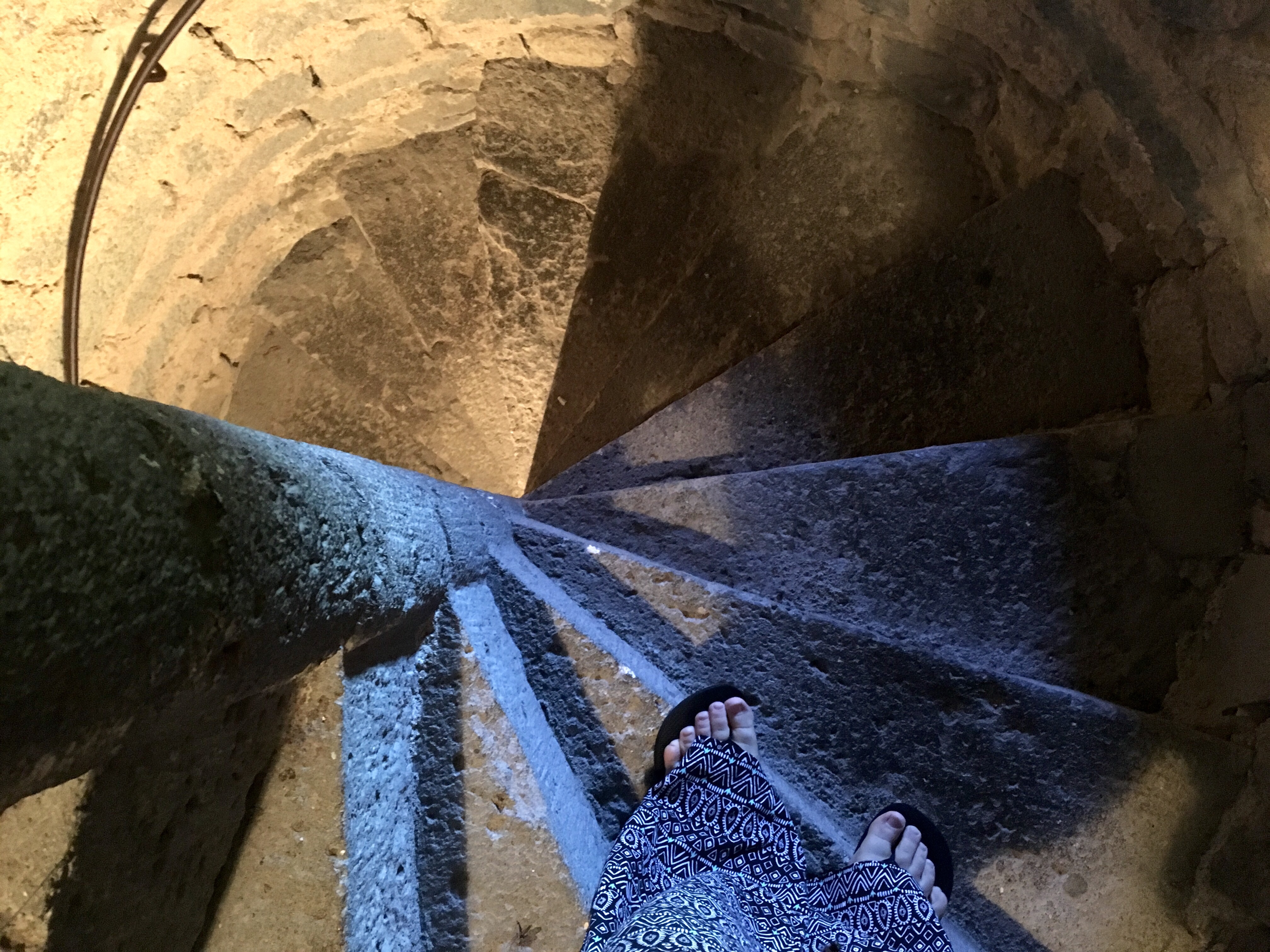 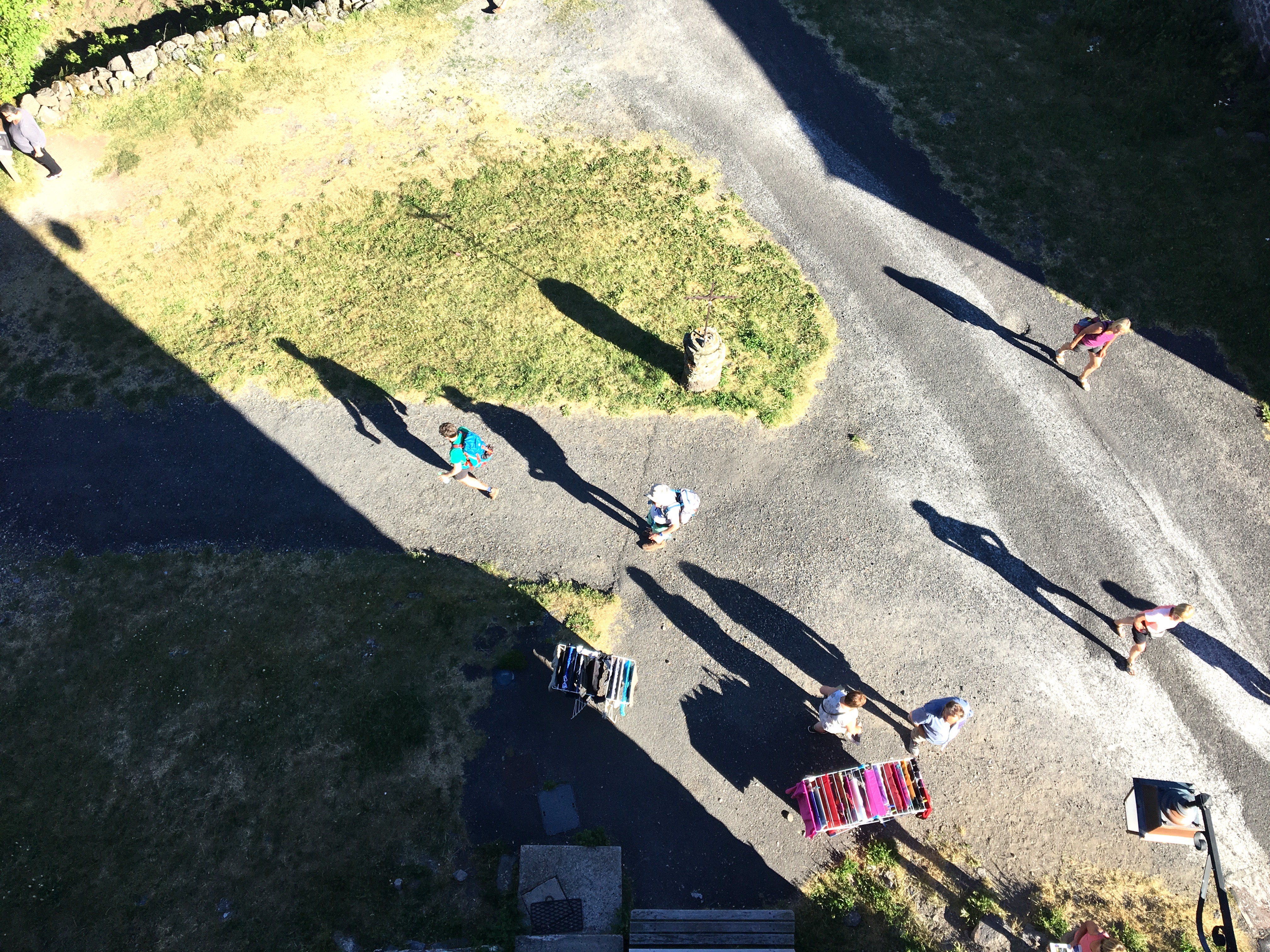 After the usual chores I walked over to the restaurant where we’d be eating that night, and sitting outside on a small terrace were the two French women I’d shared a room with a few nights before (whose names, unfortunately, I never learned or else have forgotten). They waved me over and soon we were joined by Katherine, the German woman, and the four of us sat and drank wine and talked about the day. We spoke in French, but the two French women made an effort to speak slowly and clearly (and I’m just now realizing how much of a difference this made for me- nearly everyone I met on my walk was so kind, but not everyone spoke slowly or clearly and often that made it difficult for me to understand).

There was a group of 9 of us for dinner: the four of us were joined by Nassim (a Moroccan man living in Belgium), Marie-Lou (a French woman in her 60’s), Jerome (a French man probably in his 30’s/40’s), Georges (a French man in his 60’s, who I’d sat next to at dinner on our first night in Le Puy), and Irmhild (a German woman in her 50’s).  We spoke French, but because Irmhild, Katherine and I weren’t fluent, the conversation was slower and easier to follow, and sometimes Nassim would jump in and speak English.

And it was such a good, good night. Aside from the two French women, the rest of us were doing the Chemin solo, and I think it’s special to find a group of other solo walkers to spend time with, especially walkers who haven’t really hooked up with a group of their own. It made me feel less isolated, less uncomfortable speaking French or not understanding the conversation. I felt like I was folded into the mix: I asked Georges questions about the other Camino’s he’s walked and he was so happy to tell me his stories. Nassim poured us all more wine, Irmhild laughed and taught me a few German words.

I marveled at how different this evening felt that the previous two: the night before, when I didn’t know anyone in my gîte and ate a restaurant alone, and the night before that, when I was surrounded by people but felt quite alone.

After dinner I found a quiet corner in the bar area of the restaurant and wrote in my journal, and by the time I headed back to my tower the sun had just disappeared behind the horizon. The sky was full of soft hues: the lightest pinks and blues and purples. I went up to the top floor of the tower- as high as I could get- and leaned out the window.

A girl in the top room of a tower in the French countryside- it was like a fairy tale.

I smiled. Just like I’d been doing all day, I smiled. 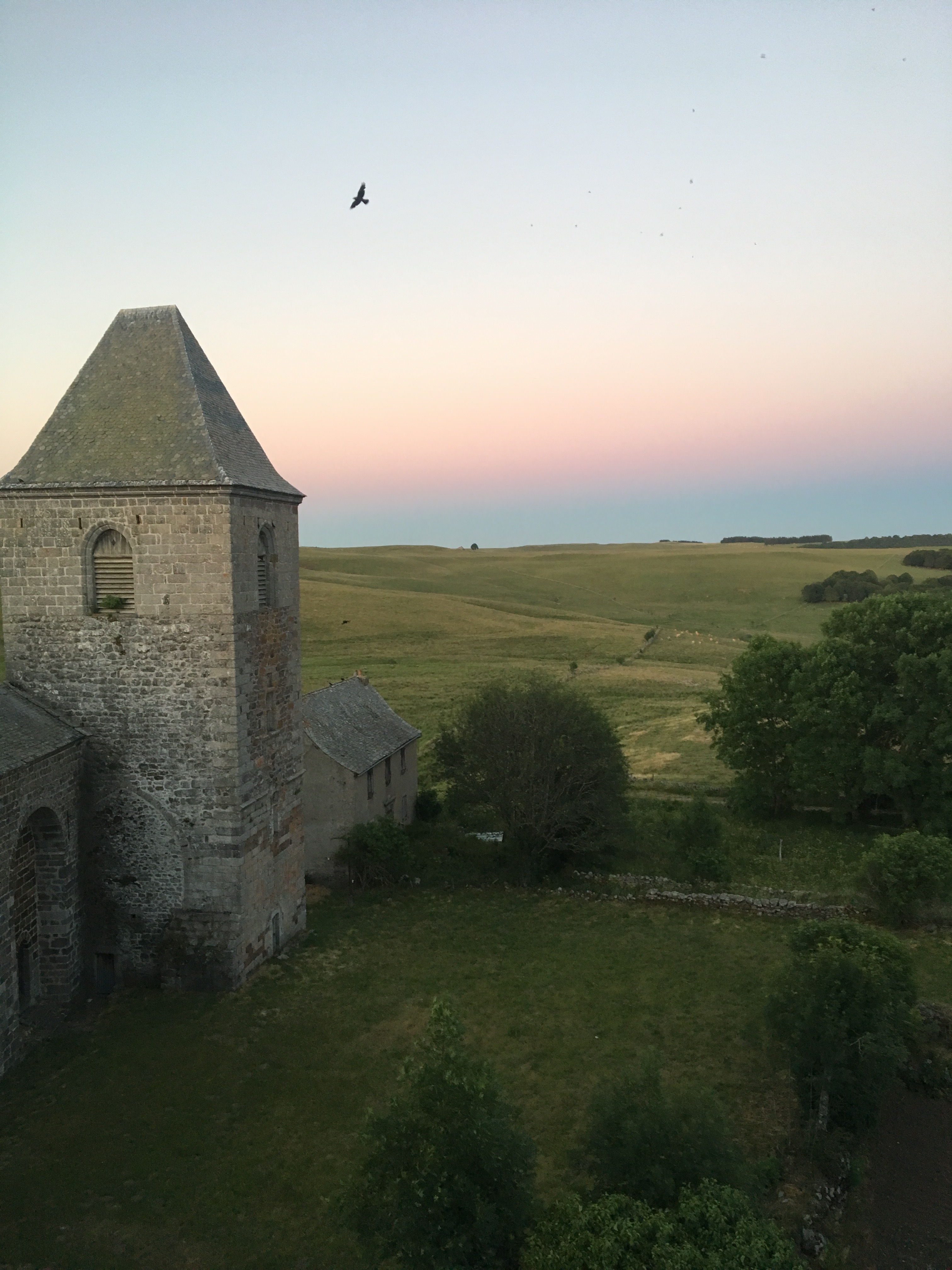