Today, I only walked 8km.

This was all according to plan, but I have to say that initially, I was not pleased. 8km? That’s less than what I typically do after work when I walk around my neighborhood. And this was a day on the Chemin!

But I was doing it out of necessity. One of my previous posts mentioned the trouble around Nasbinals, the town that was hosting a road race for hundreds or thousands of people who had taken all the hotel/gîte rooms.

So my solution around this was to do a really short day, and stop in Aumont-Aubrac, where I had been able to find a bed in a gite. And the following day, I would walk 35km to make up for the shorter day. Now that was the part of the plan I liked: a long day, a physical challenge.

8km, on the other hand, would pass by in the blink of an eye. I tried to linger- I really did- I savored a second cup of coffee, I took a long time lacing my shoes, I was the last to leave my gîte in the morning.

And as I walked, I stopped to take photos and to try to enjoy the view. But my feet felt restless, and I was distracted. When I arrived in Aumont-Aubrac, what in the world was I going to do? I was going to have the entire day at my disposal, I was all alone, and all I really wanted to do was walk. 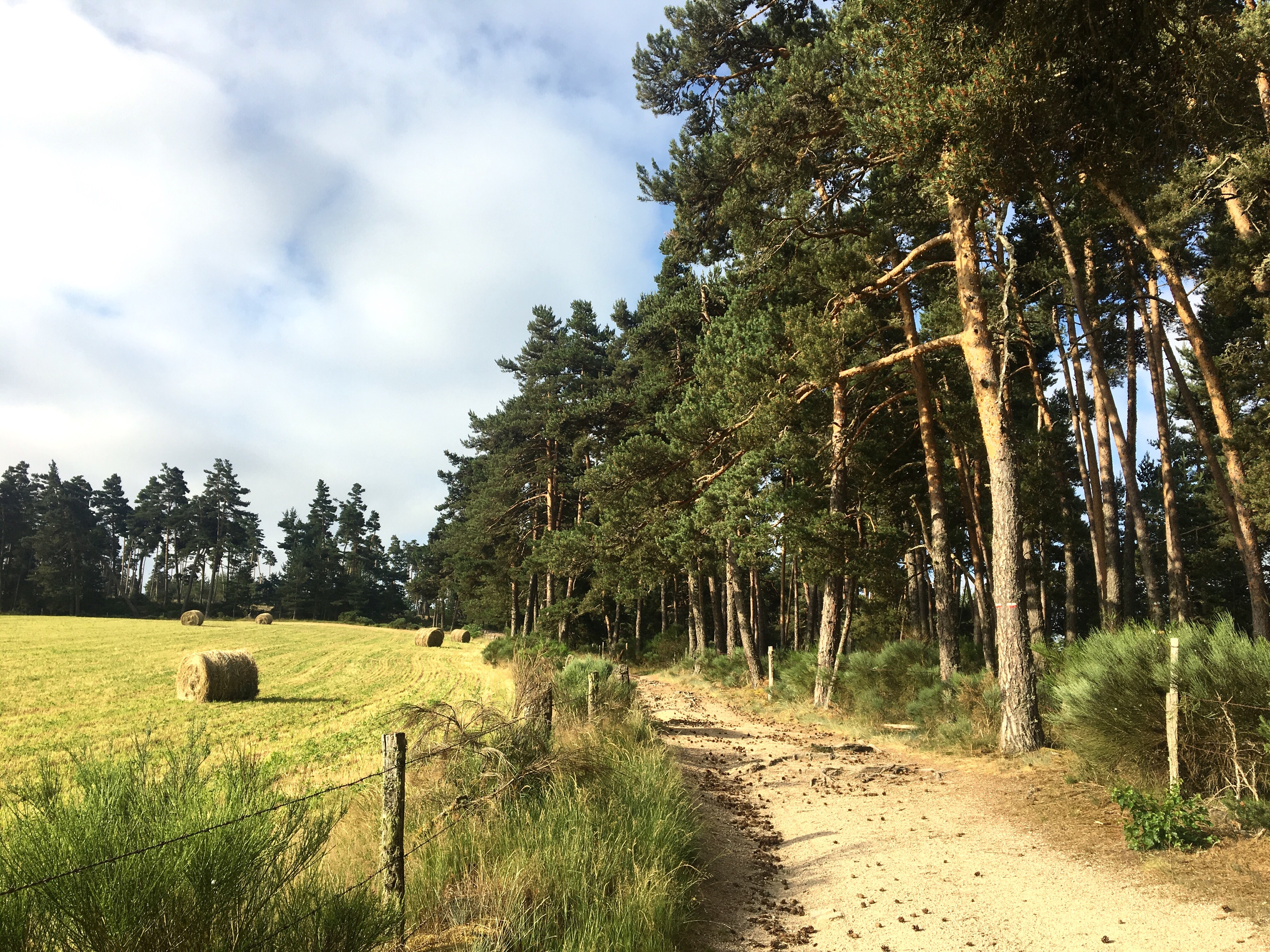 I was deep in these thoughts when suddenly the boy in the red shirt with the big pack appeared at the side of the trail. There was no avoiding him this time- he started walking just a pace behind me- but I wasn’t in the same mood as the day before. I decided that I might as well say hi and try to be friendly.

It turns out that he wasn’t French afterall- he was German and his name was Sten, a name that means ‘stone’. Even though he could speak English we spoke in French, and I found that I didn’t mind. In fact, I kind of enjoyed it: our levels were pretty evenly matched, and it was so much easier to speak with him than with a native French speaker. We both made mistakes and often had to search for the right word. He spoke slowly and I could understand him easily.

Sten had to catch a bus in Aumont-Aubrac at 9:40am; he had already walked a couple of the upcoming stages so he was going to skip over the sections he had already done. This meant that he had to walk fast in order to catch the bus, but I was able to easily match his pace. It felt good to stretch my legs like this, to move quickly down the trail, to talk easily with the person at my side.

The only downside of walking with someone like this was that I arrived at my destination by 9:20am. We went to a cafe and Sten bought me a coffee, but before I knew it he was standing and shaking my hand and saying how nice it had been to meet me, then was running off to catch his bus.

I watched him go, and then smiled. The interaction had been just what I’d needed, just enough to shake me out of my loneliness over saying goodbye to Hilary, enough to bring me back into the world of the Chemin. And as I sat in the cafe, I watched as people I knew filtered in and out. They came over and said hi, Pierre sat with me while he waited for Stephanie, the young Quebecoise girl. Katherine, a blond German women who had been in the samegîte  as I had the night before, talked to me about how out of place she’d felt at dinner. “Really?” I said. “You looked so comfortable.”

Eventually they all left, on to other towns and other gîtes (most of them had found beds in a gîte that was a bit off the main path of the Chemin. I’d tried to get a bed there as well, but had been too late).

I walked around the small town to get my bearings. It wasn’t a large place, just one main street with several restaurants and shops, a main square full of cafes, a church, a park. I found a boulangerie and bought a sandwich to eat for lunch, I stopped by an epicierie to load up on snacks for the next day. 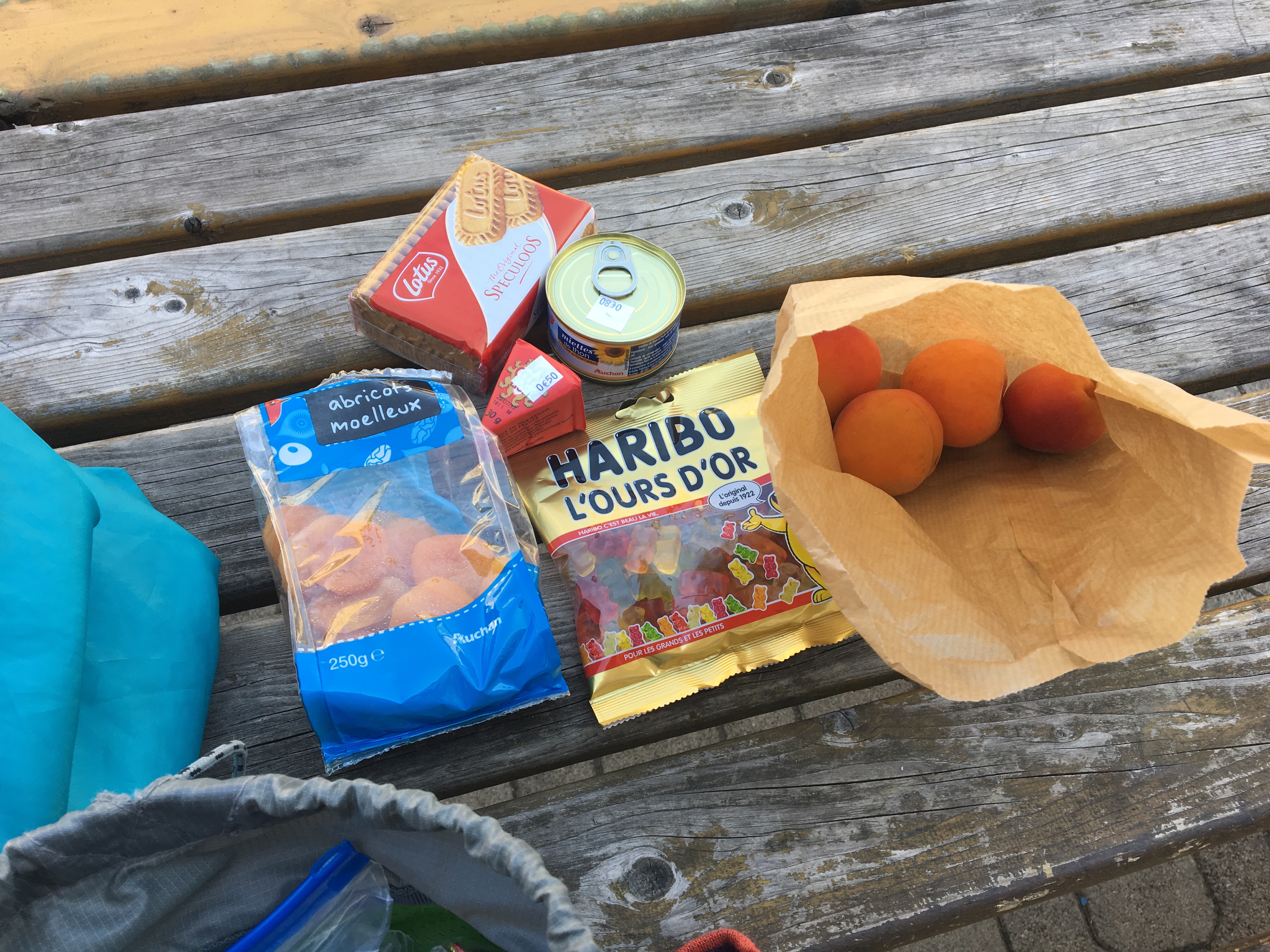 In the park I settled into a picnic table in the shade, opened up my guidebook, and mapped out a plan for the next several days. I made phone calls too (this was one of my least favorite parts of walking the Chemin; calling ahead to book gîtes meant that I not only had to talk on phone, something I don’t even enjoy doing in English, but I had to speak in French which was still kind of nerve-wracking).

I looped through the town a few more times and then around 1:00 decided to see if I could get into my gîte. I was suprised to see that the door wasn’t locked, and that in the hallway on the bottom floor was a note that said to leave my shoes and pack downstairs, and then go upstairs to see which bed I had been assigned to. The hospitalera would be by in the evening to take our money and stamp our credentials, and in the meantime there were notes and signs all around, instructing us on what to do.

The gîte was perfect. Sometimes on the Camino and on the Chemin you get just what you need, and this had been happening to me all day. The place was clean and bright and modern and spacious. We were in a narrow apartment building and the gîte was spread out over three floors. Above the entryway and downstairs hallway was a floor with a sitting room and the kitchen, along with a couple of bedrooms. And the floor above was where I was staying. There were several rooms up here, too, and I was staying in a room with four beds. Since I was the first to arrive in my room, I could have my pick of beds, and I discovered that my room was actually split into two spaces. One had three beds, and another- behind a curtain- had one bed and a little desk by a large window. It’s like it was meant for me! Maybe it was. 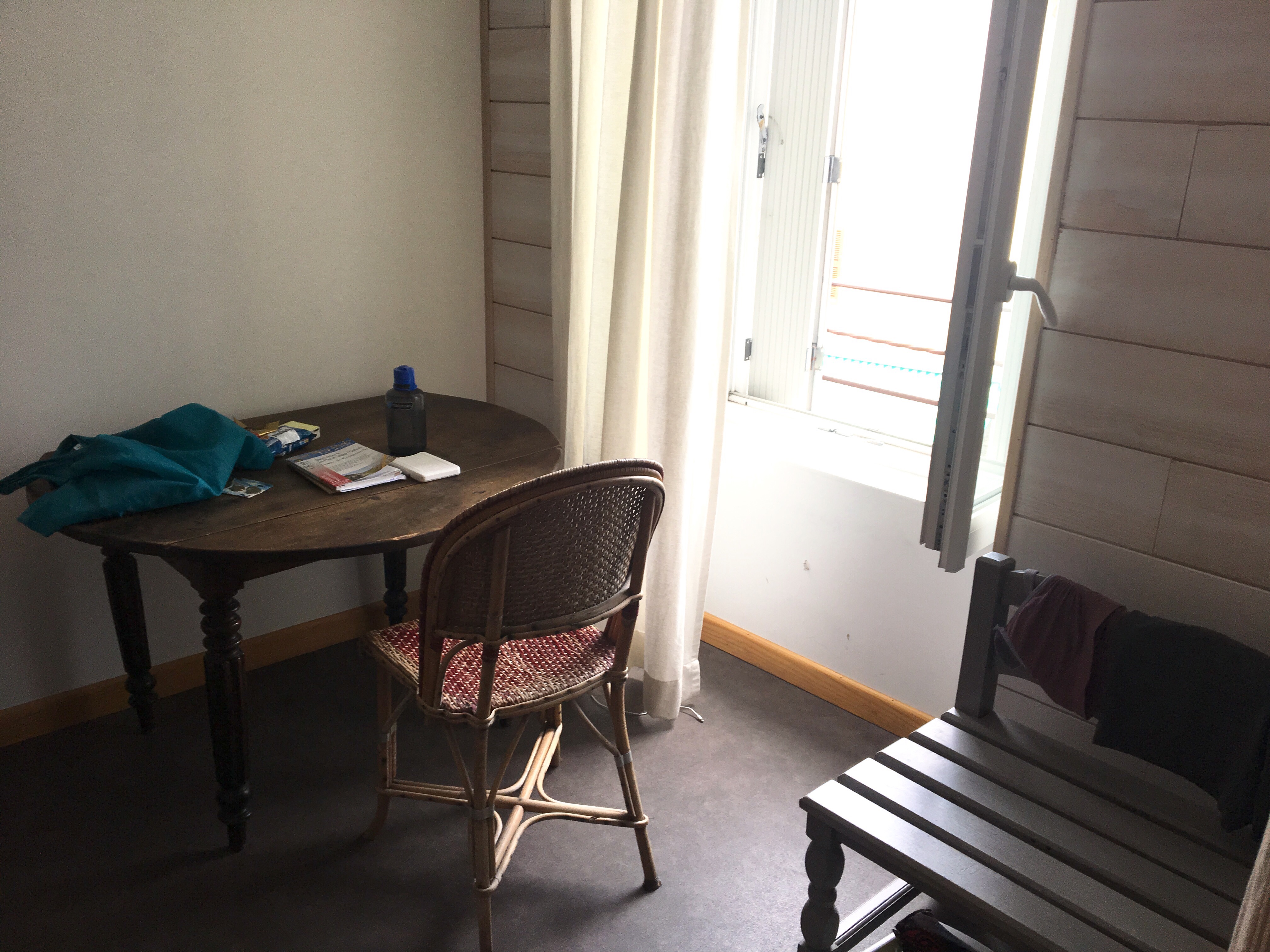 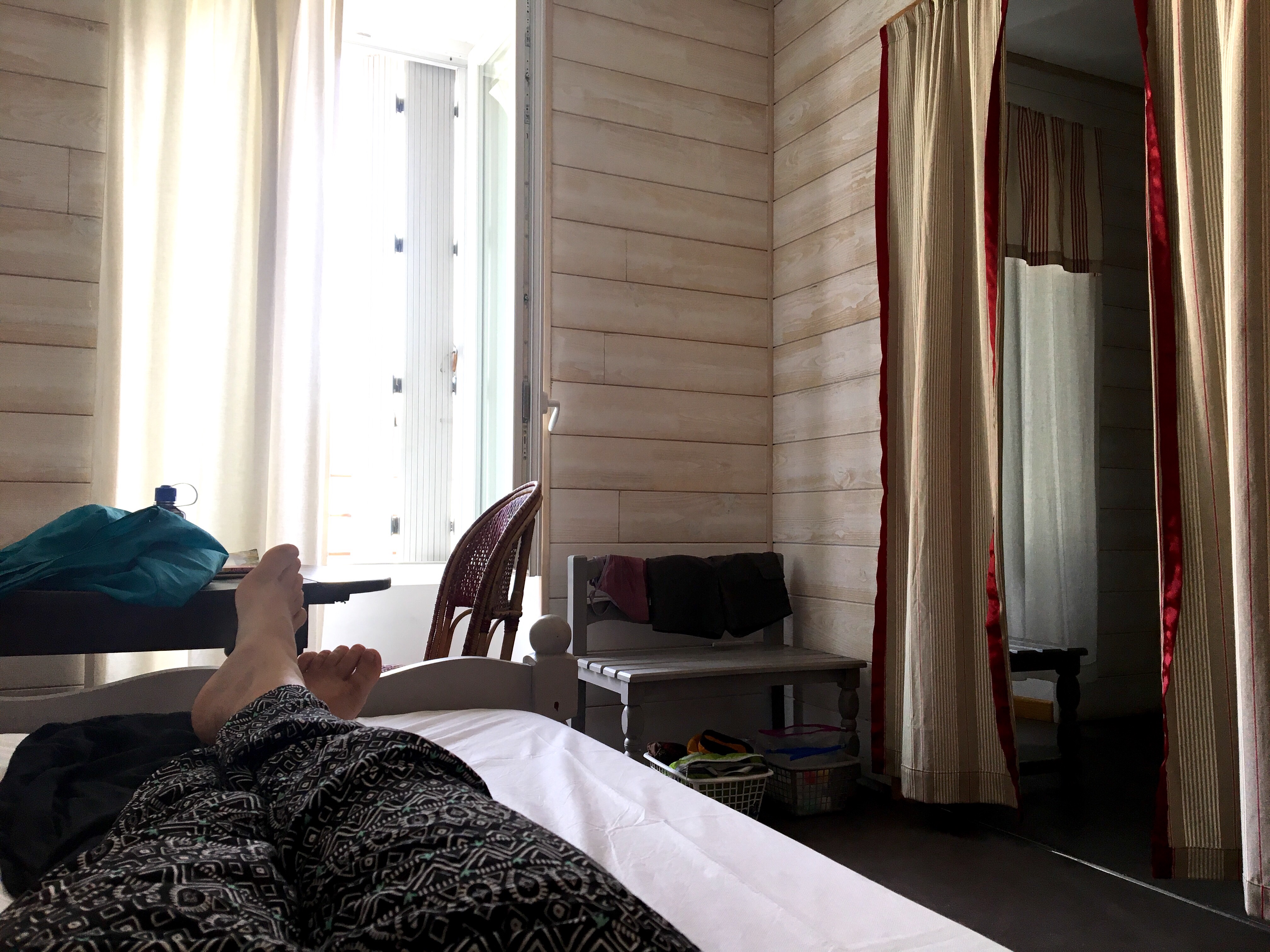 The bathroom was large and clean, there was a rack to dry my clothes outside on the small balcony (set up in the sunshine), there was a fridge where I could keep my fruit and yogurt, there was an outlet right next to my bed where I could plug in my phone. This was gîte paradise.

The rest of the day was slow, relaxing, restorative. The other three beds in my room remained empty, the other pilgrims never showed up. The hospitalera, when she arrived, was so kind and helpful; she gave me the names of other gîtes along the way that she thought I might like, and gave me some advice about the trail for the next day. I met another pilgrim who was also staying in the gite- a guy from the Netherlands who had been carrying a big guitar down the trail. In the afternoon he played for us, slow Spanish flamenco music, the sound filled the rooms and floated down the hallways and out the windows and I was so relaxed I almost fell asleep in my chair.

There was no demi-pension at the gîte so in the evening I went out to one of the restaurants nearby. I wanted something simple so I ordered a goat cheese salad and a glass of wine and I should have known that my salad would be anything but simple: there was the goat cheese over toasted bread slices, yes, but also tomatoes and corn and carrots and peppers and lardons and grilled onions and slivers of garlic. 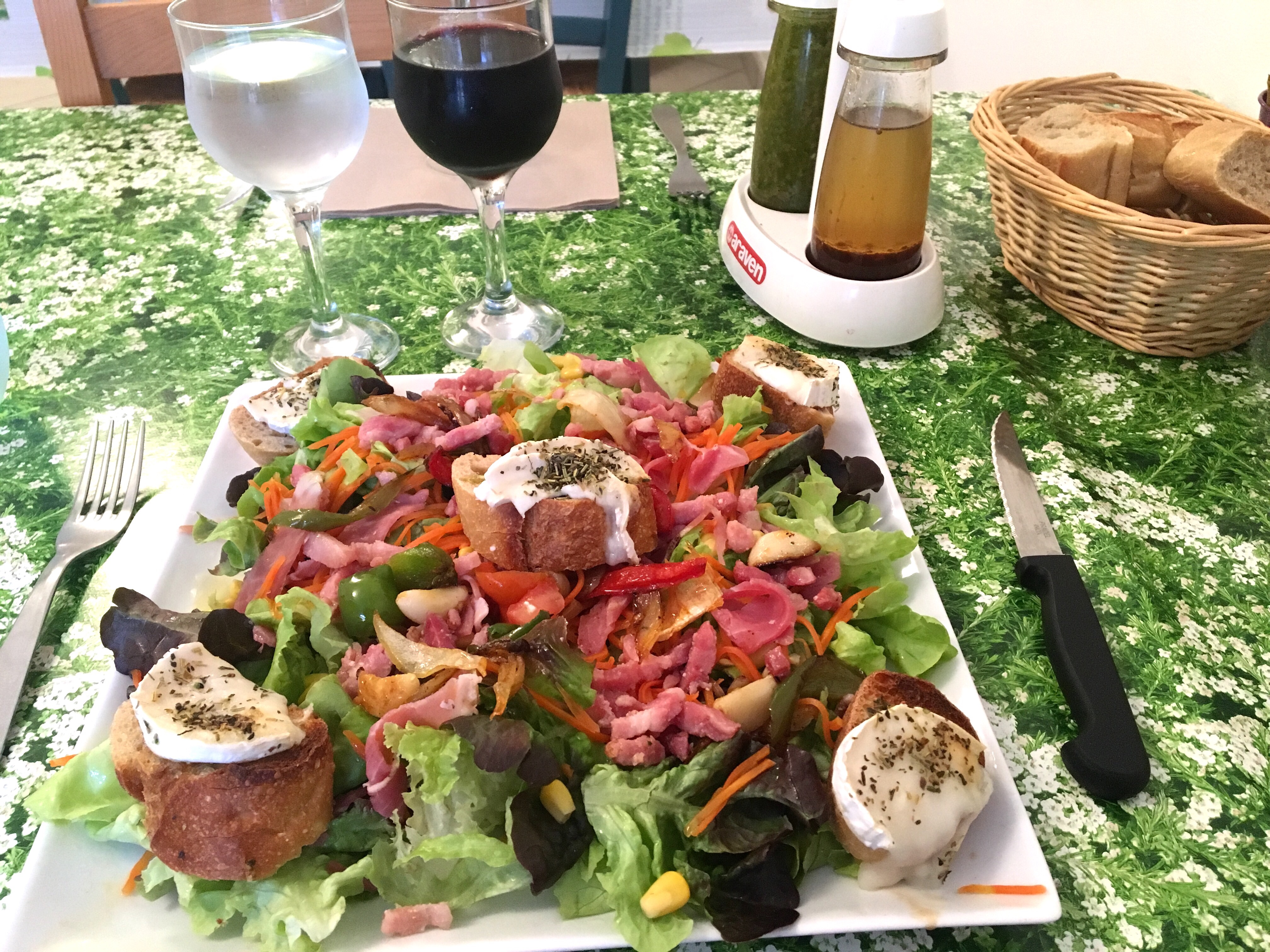 After dinner I walked through the town again, just to stroll through the streets and stretch my legs before bed. I found my way to the church, stained-glass glowing, empty pews, a line of lit candles and I added my own, giving up a small prayer of thanks for the day, for getting what I needed, for feeling renewed and refreshed and ready for what would come next. 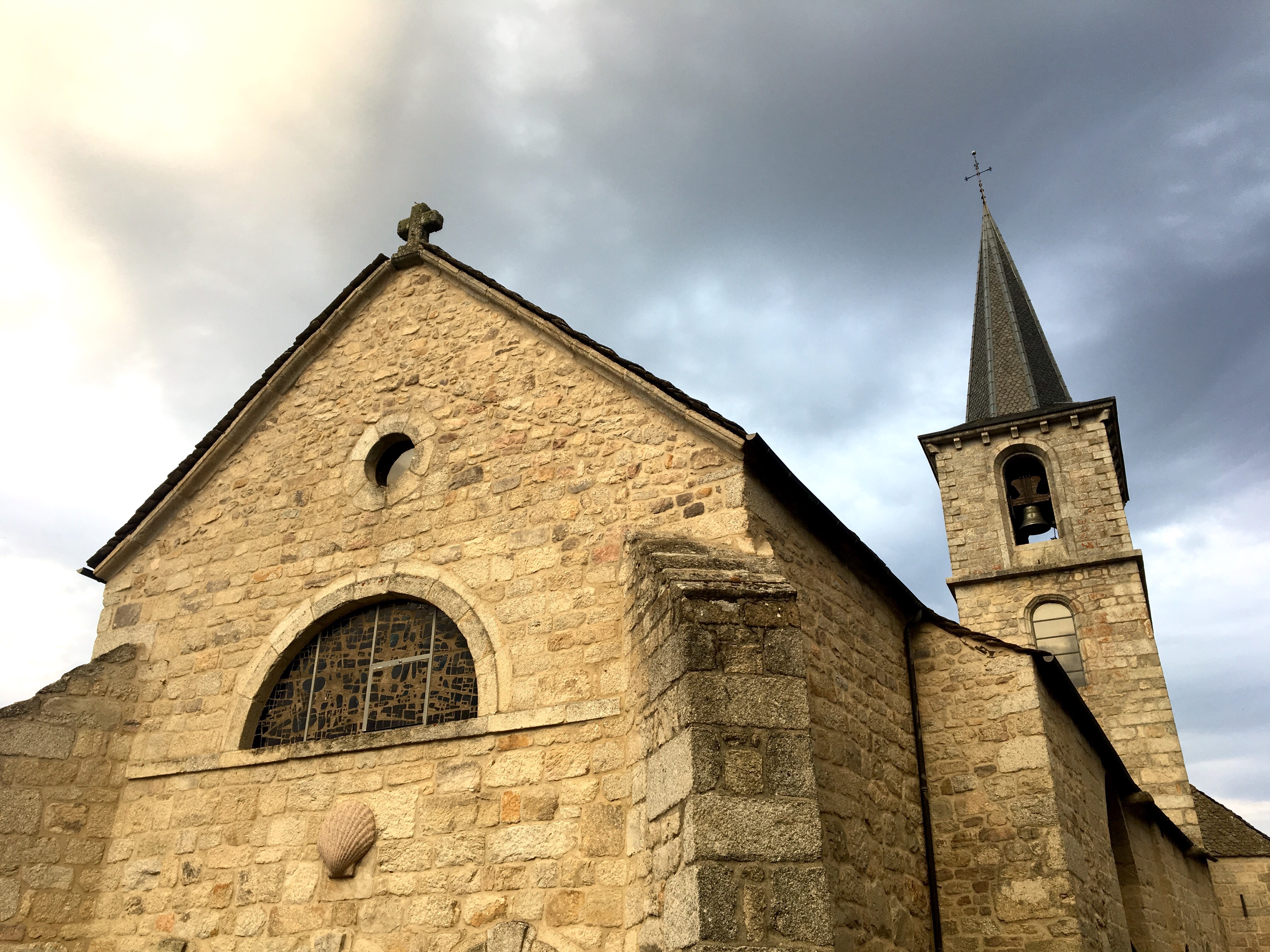