Here is the image that stands out the most from Day 4 of the Chemin du Puy: standing next to a small chapel in the middle of nowhere, waving our arms wildly at the shuttle hurtling down the road, watching as it passed us by without even slowing down. This was Hilary’s ride back to Le Puy. 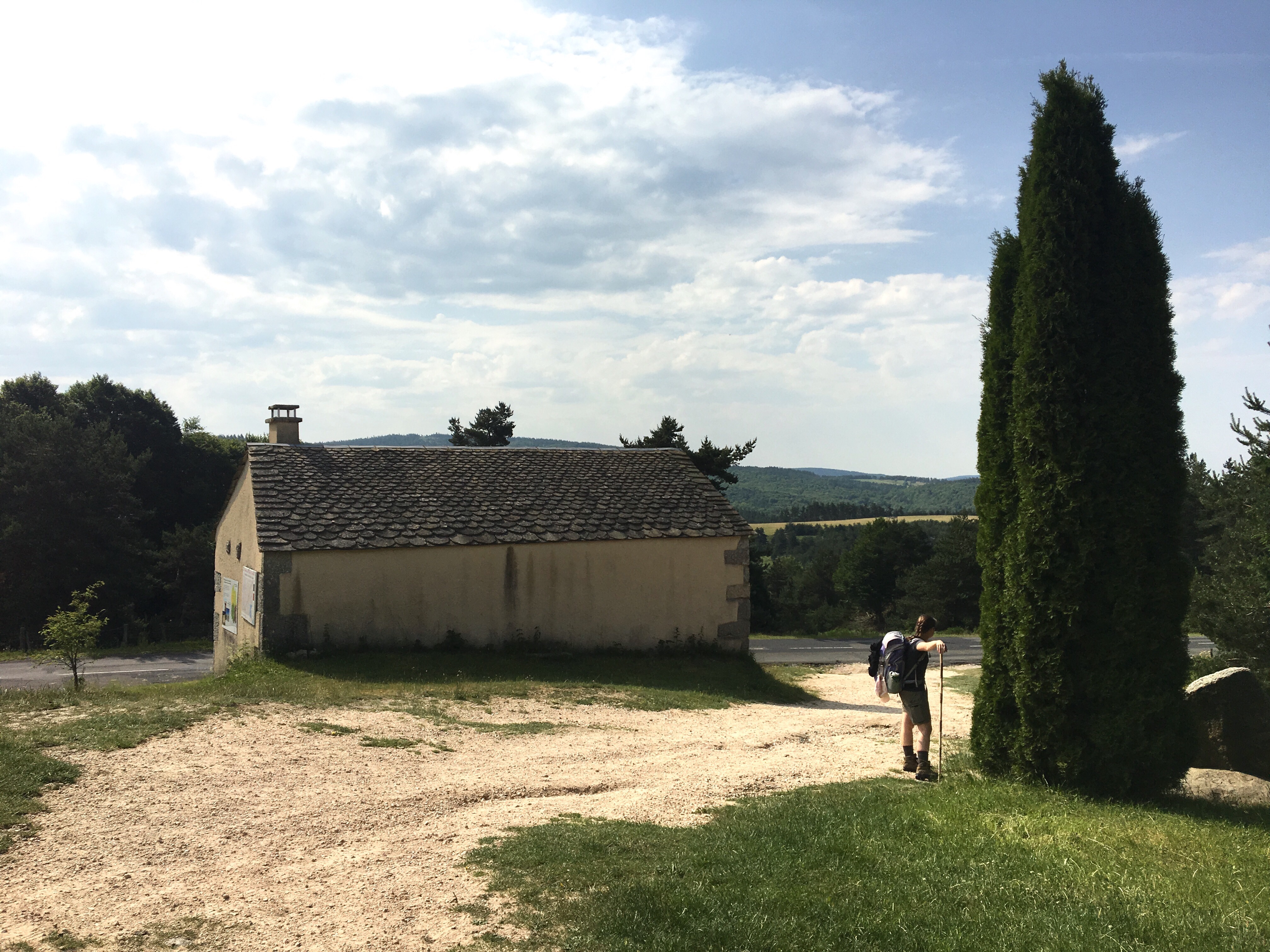 But let me back up for a minute. We started our morning in Le Sauvage, eating breakfast after nearly everyone had already finished and headed off for the day. We were in no hurry because Hilary’s shuttle wouldn’t arrive until 11:10am. We would have to walk just a bit- 4km- to the place where the shuttle made its pick-ups; usually shuttles come to the gites, or some central place in town, but since we were in the middle of a field and the only roads were gravely and sandy, the man at La Malle Postale (luggage delivery and shuttle service) told me that the pick-up was 4km away, at the Chapelle de St Roch.

I’d made the shuttle reservation before leaving for France, and then confirmed it in La Malle Postale’s office in Le Puy at the start of our journey. So I wasn’t really worried unil we we met a couple who were also lingering over breakfast. The woman told us that they were also getting picked up by the shuttle- at 11:20- but their pick-up was at the gîte.

This seemed a bit strange, and Hilary and I laughed about that fact that she was going to walk for an hour, only to be picked up by a shuttle that would most likely be taking her right back to where she’d started walking an hour before. But we shrugged it off and walked on, and finally the morning was cool and almost crisp, the path running through a forest track that was quiet and peaceful and beautiful. 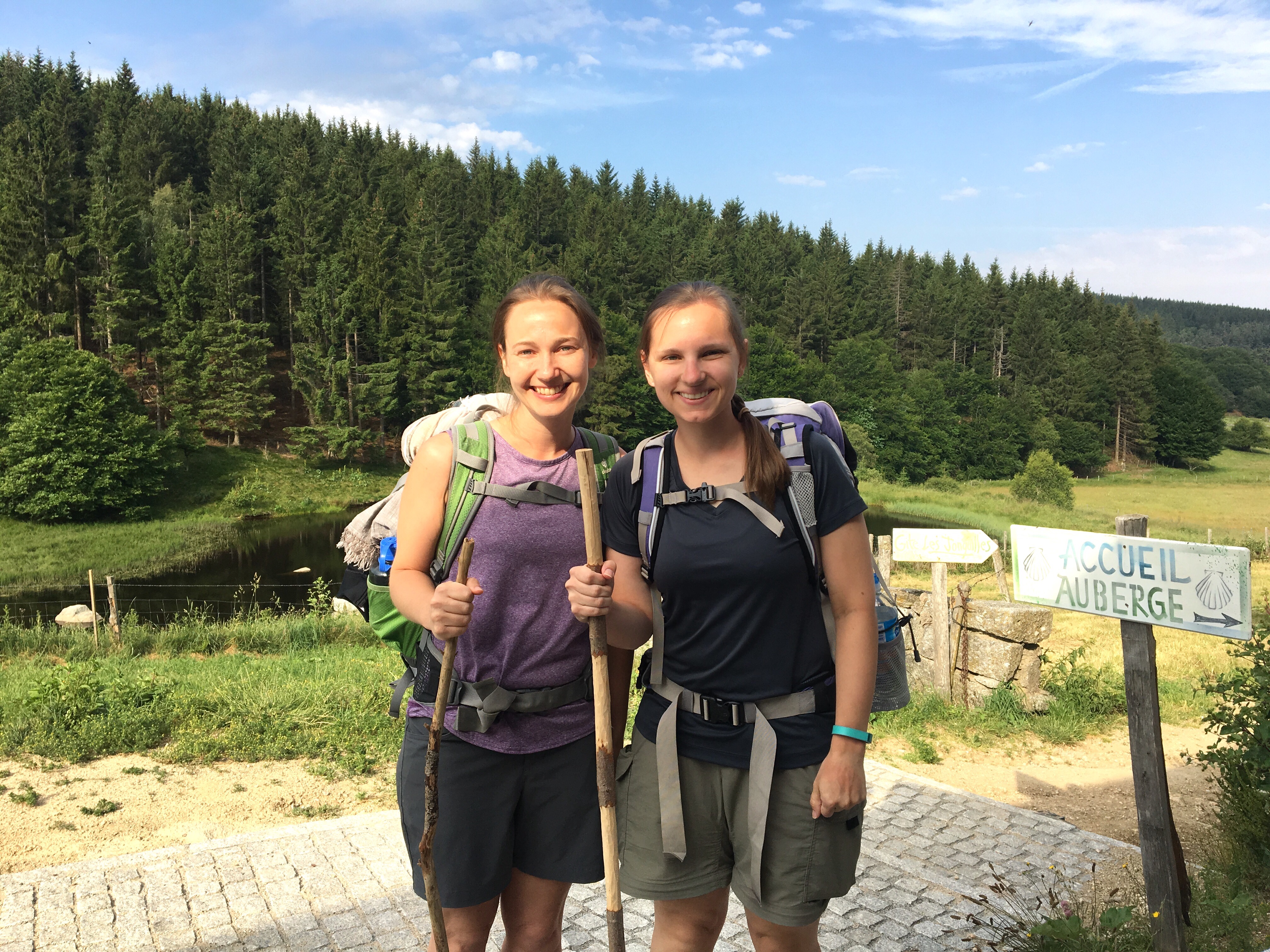 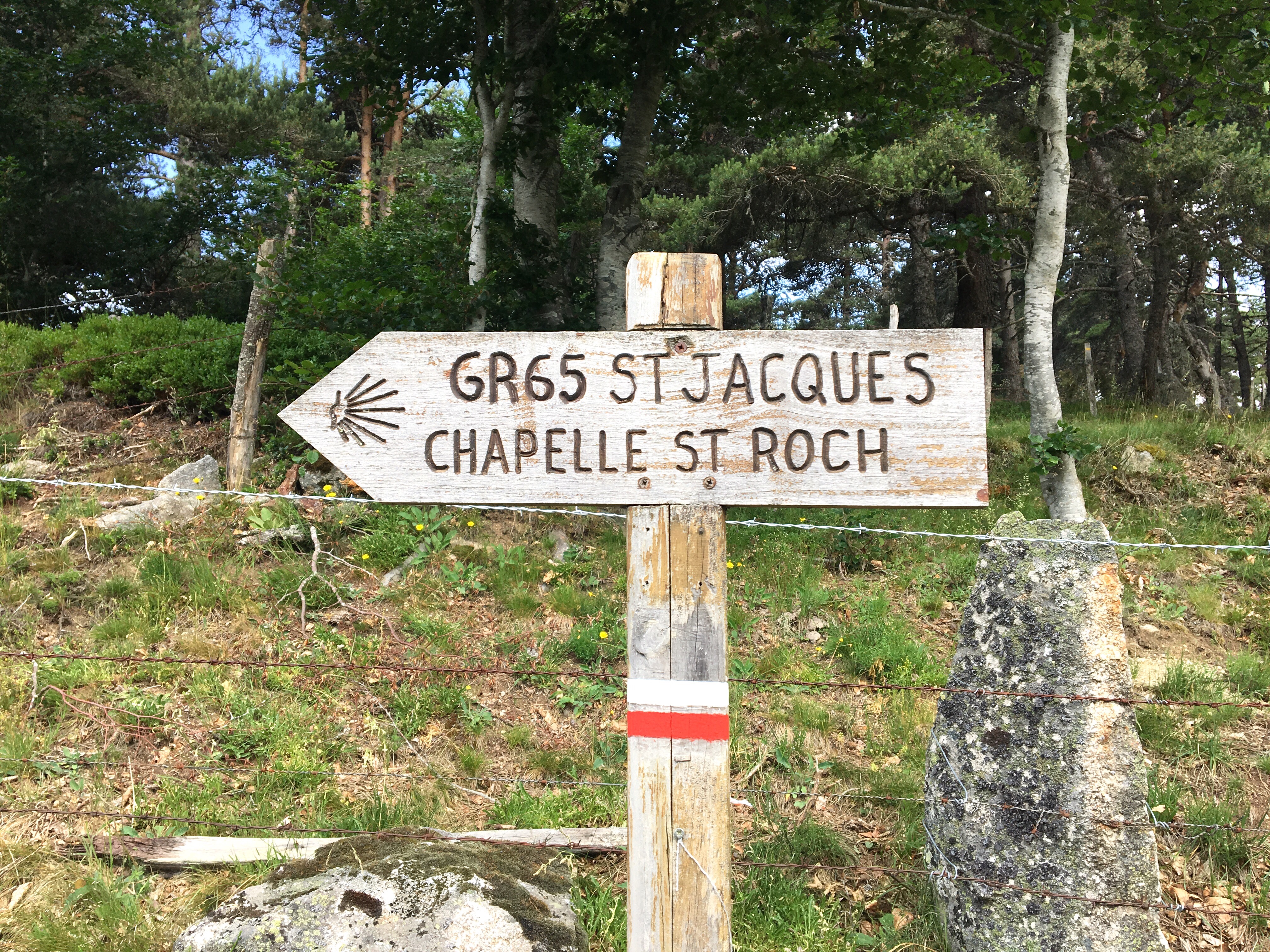 We got to the chapelle an hour early, and had plenty of time to eat snacks and for Hilary’s to rearrange her bag, and to sit and talk about the last few days of our journey together. As 11:10 approached we gathered our things and stood as close to the road as possible. We waited, and waited, and I didn’t start to get really anxious until about 11:15. The minutes ticked past and finally, at 11:20, we saw a white van approaching.

“That must be it!” I said, but the vehicle didn’t seem to be slowing down- in fact, I swear it was gaining speed as it drove past. We waved frantically and I’m pretty sure some of the passengers must have seen us but the driver just stared straight ahead, and we watched as the shuttle faded from view.

I immediately got on the phone with La Malle Postale’s office and didn’t even attempt to speak in French as I explained what had just happened. The guy in the office put me on hold as he made a call to another driver who was out in our area, and luckily, in about 5 minutes another shuttle came by and pulled over to pick up Hilary. 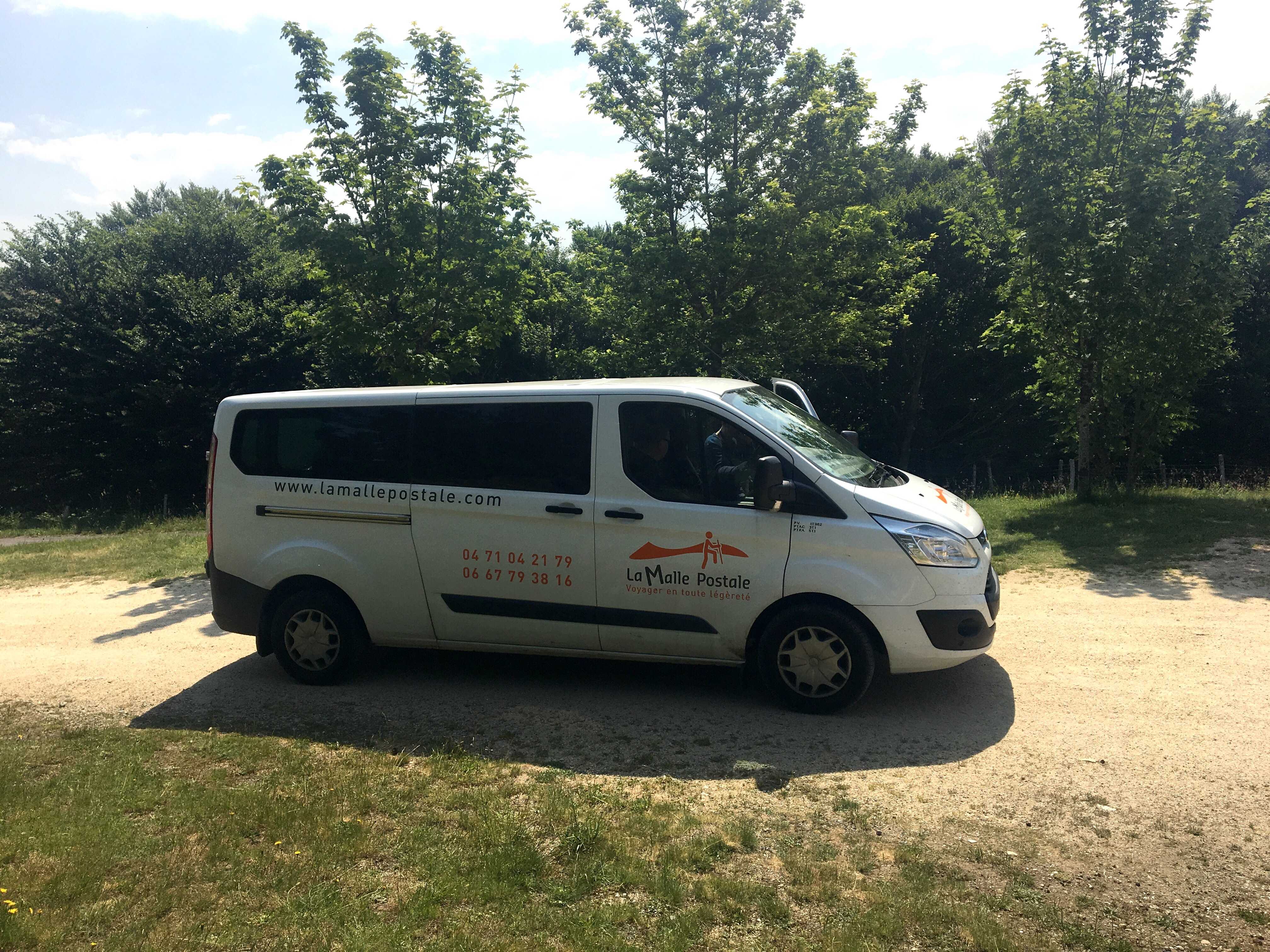 I’m still not sure exactly what happened- later, Hilary told me that the driver of her shuttle said that she was lucky that the office had called him and that he was nearby. That first shuttle was the one she was supposed to be on, and it was clear that the driver had no idea he was supposed to pick someone up (although, two girls on the side of the road waving their arms wildly would have been a good tip off…). Something must have gotten mixed up with my reservation, but with an email confirmation AND an in-person confirmation of the date and the time of pick-up, I have no idea what the mix-up was.

In any case, after a long hug and holding back some tears, Hilary got on the shuttle and I watched as it drove away. And man, did I feel strange and alone. It’s worse than the feeling you get when you leave your walking stick behind: it’s like a vital part of my pilgrimage was no longer with me, and I would have to figure out how to carry on without it.

I wasn’t even totally alone just then- a few minutes before Hilary got on the shuttle, a young guy in a red shirt and large backpack had walked up to the chapel and was taking a break there. After Hilary left I saw him lingering but I waited until he packed up and moved on. I was in no mood to meet someone new or try to speak in French or anything else. I just needed a little time to be on my own and to miss Hilary and to adjust to Phase 2 of my pilgrimage. 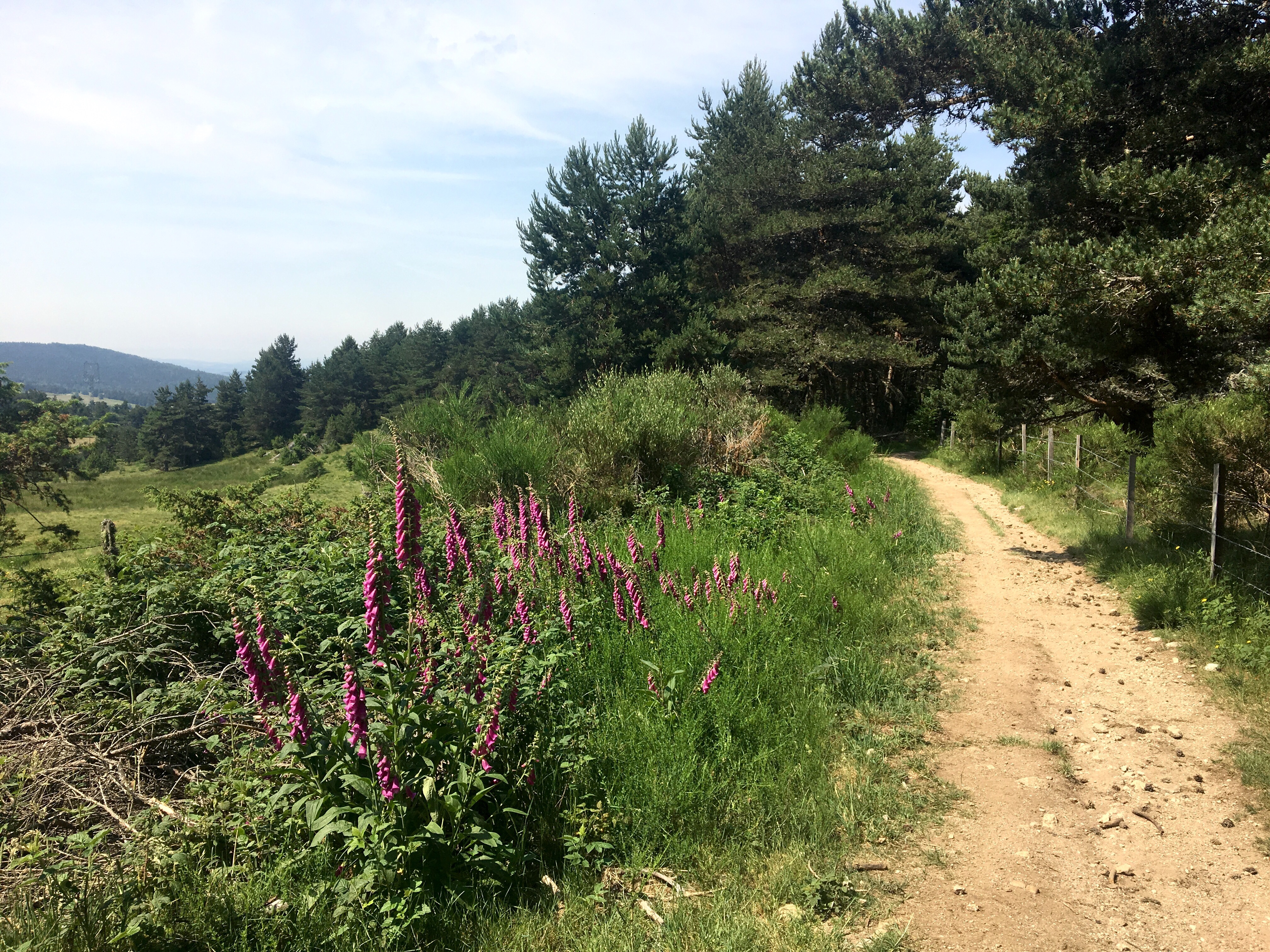 To be honest, the rest of the day was… off. I didn’t feel particulary strong as I walked, the day grew hot, I was indecisive. I passed through a town that felt abandoned and strange, and even though I was hungry and needed to pick up something for lunch, I walked past several open cafes, not wanting to go inside. I sat in the shade by the church, knowing I should take off my shoes and rest for awhile, but I felt restless. I saw the guy in the red shirt again and still didn’t want to even attempt to say hi.

Eventually I got myself a sandwich and ate it on bench in the shade just outside of town, and then I kept walking, and the day continued to be off. Right on cue, it seemed, dark clouds suddenly rolled in and I was walking at a bit of elevation and without much cover. I was so focused on the clouds and listening to the rumbles of thunder in the distance that I took a wrong turn and got myself off of the Chemin. I think I was happy to be on a path that was heading away from the clouds and towards a patch of blue sky that I didn’t realize I was no longer going the right way. But the Chemin is well marked and after awhile I realized I hadn’t seen the red and white striped waymarkers for quite a long time. Feeling defeated, I turned around and had to trudge back uphill, towards those dark clouds. 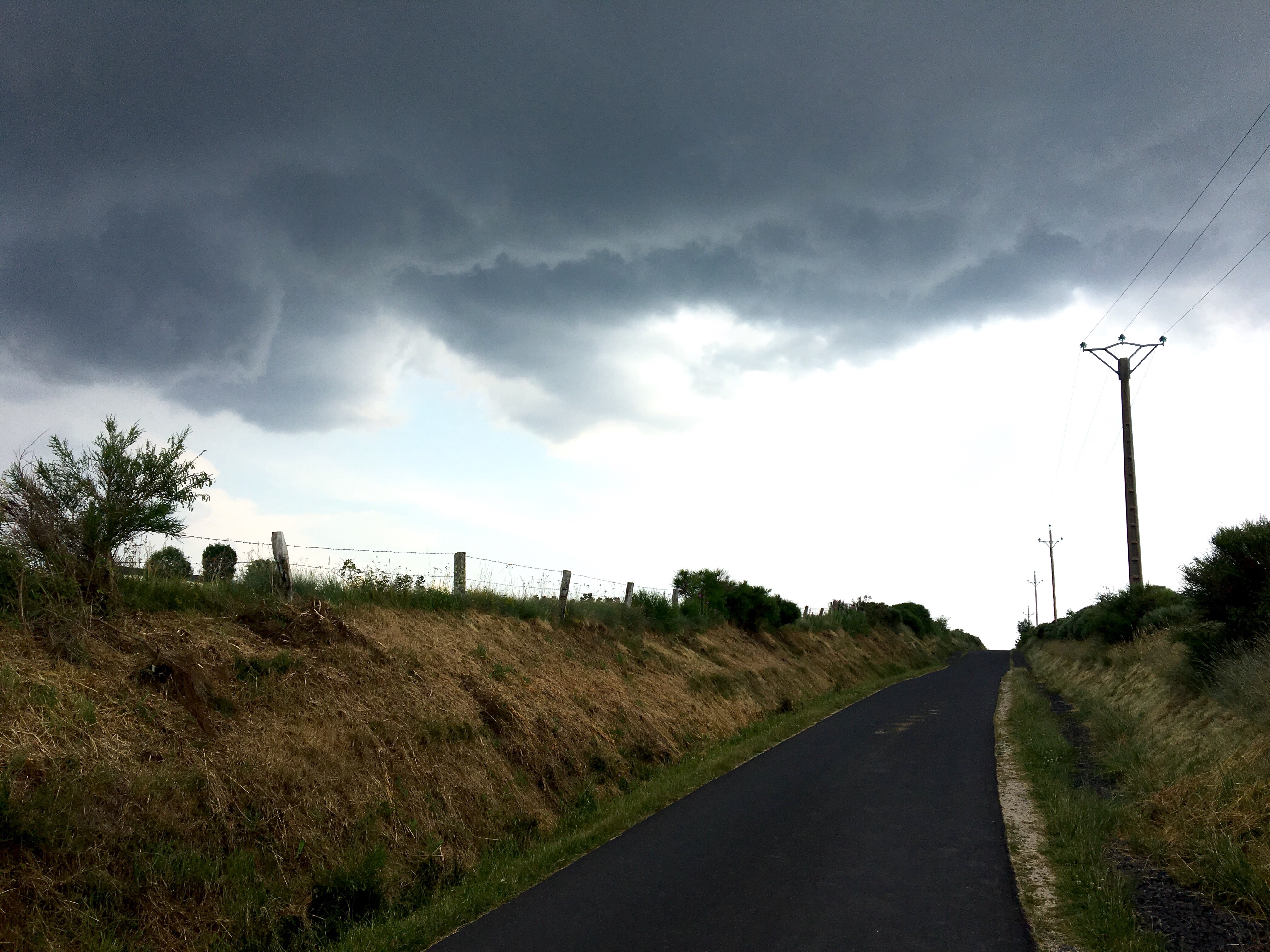 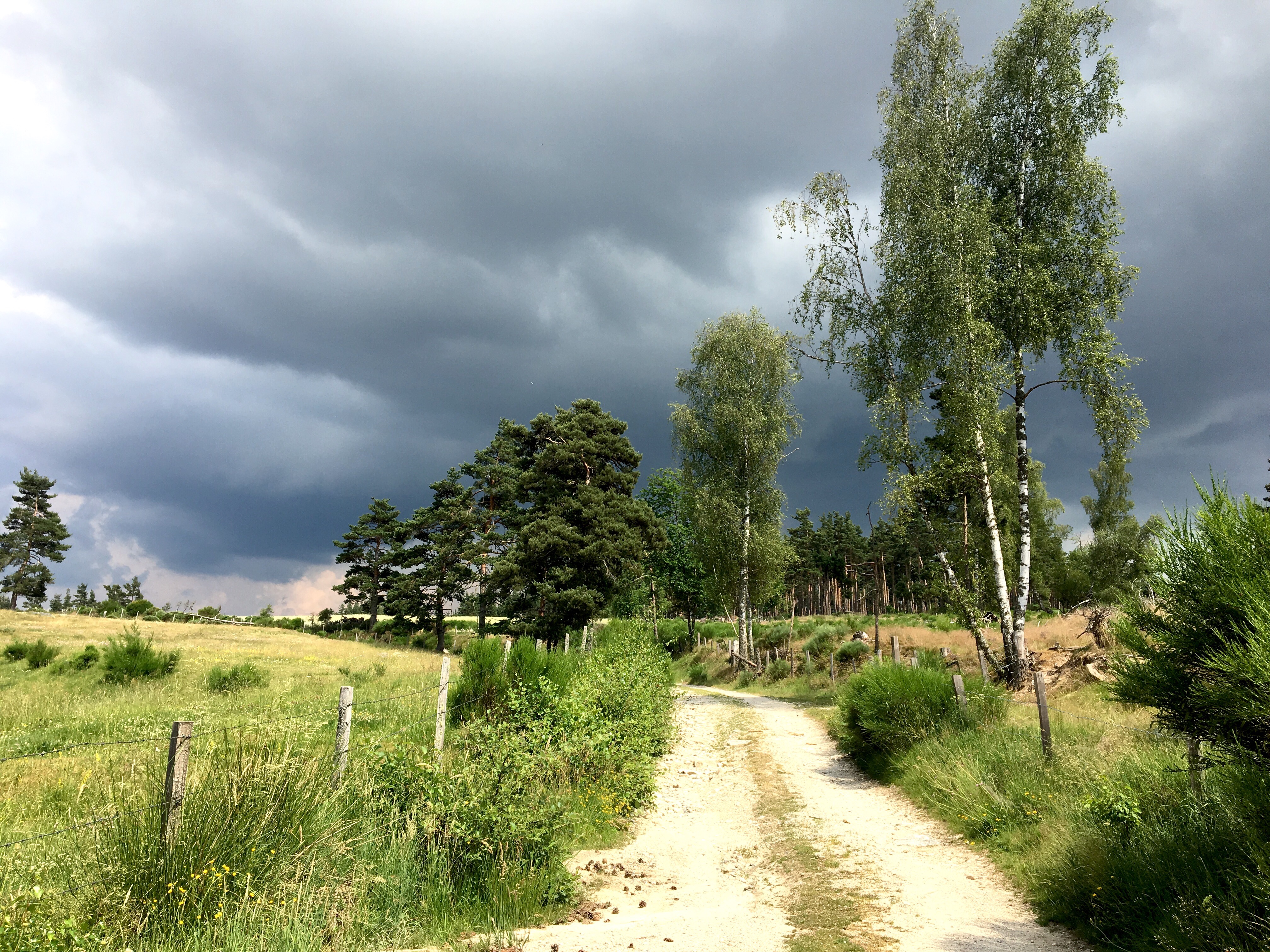 I saw one bolt of lightening and that’s when I got scared. Several days before, Mario had warned me about getting stuck in a thunderstorm and now here I was, alone and off-track with a storm brewing. I found the most tucked away spot that I could and crouched down and waited for awhile, unsure of what else to do. Was it safe to keep walking? Was it safe to stay here?

Finally, when I hadn’t heard a rumble of thunder for several minutes and it seemed as though the clouds were beginning to move away, I started walking. I found the Chemin, I continued on, and as luck would have it, not 10 minutes further down the trail was a shelter made of branches and sticks! There were wooden stumps inside and a sign that welcomed pilgrims and I hunkered down in here until I was sure that the threat of the storm had fully passed. 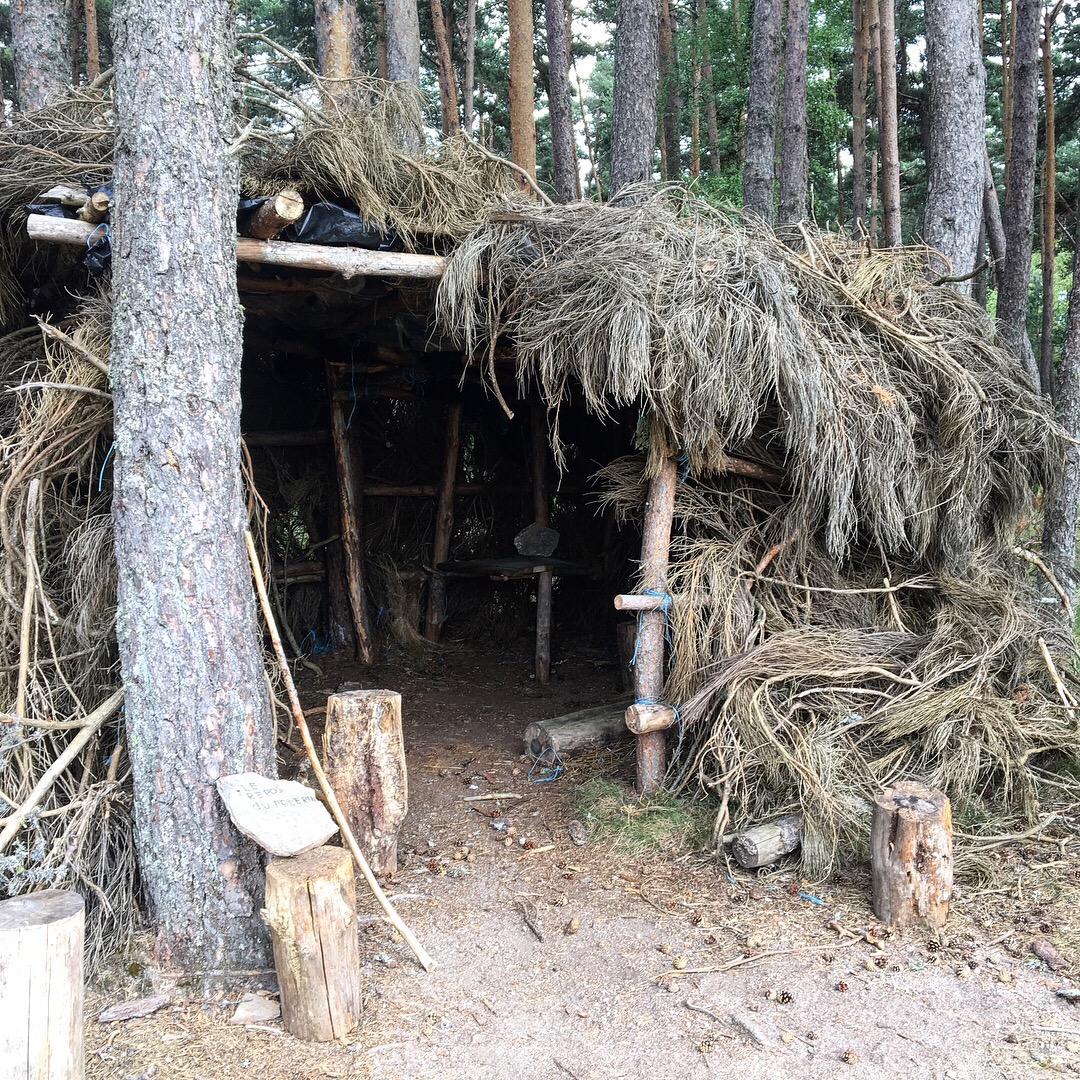 I was actually fairly close to my gîte and arrived after only another 30 minutes of walking. I was staying in another beautiful spot: a large stone building with a big lawn and plenty of space to hang laundry. There was a cozy space inside to sit and read, and you could “order” a drink and the hospitalera would bring it to you from the kitchen. I was sharing a 4 bed room with two other women, and even though I was probably the last to arrive in the gîte, I still had time to shower, wash my clothes and have a glass of wine before dinner. 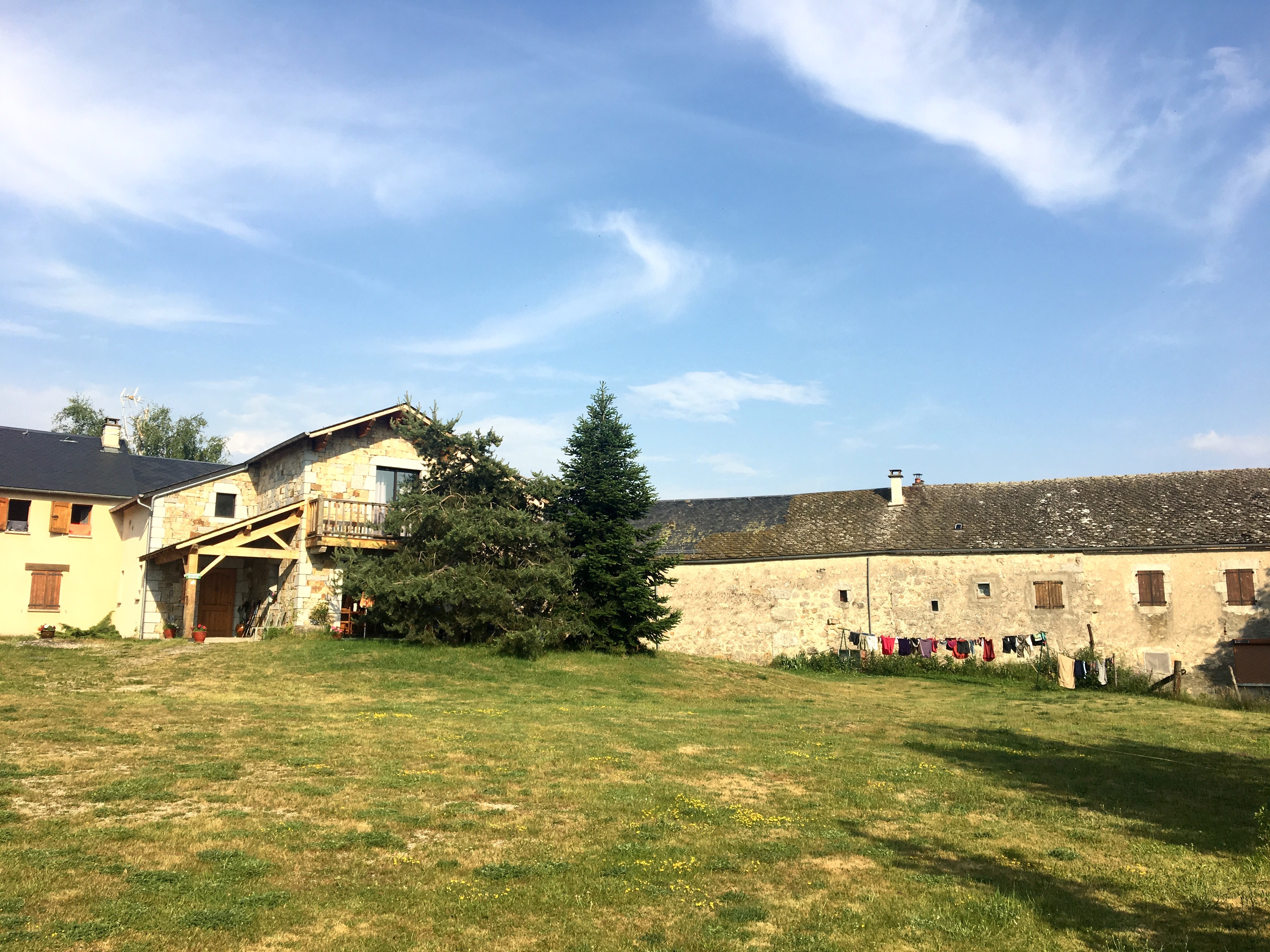 But dinner was difficult without Hilary. I think I was feeling sad that she was gone, and suddenly self-conscious about speaking French. I was sitting at a table with such nice people-Pierre, who I’d met the day before- was there, so was a young girl from Quebec, and two brothers, and the kind women I was sharing a room with. But the French was spoken so quickly, the voices jumbling together and it was so difficult for me to keep up, to understand what was going on. I felt isolated, sitting at the end of the table and hoping the meal would be over quickly so that I wouldn’t have to keep feeling so awkward, and out of place.

Mostly, I think I needed a little time to transition into this now solo journey, a little time to adjust to being alone and speaking French and needing to meet people and make friends. I tried to remind myself that it doesn’t happen all at once.

Sleep that night was restful, and in the morning the two women I was with agreed: the way to go was to try to stay in a room without men, to be assured of no snoring! (I know it’s no guarantee, but throughout the night we were all quiet as mice, and it was such a relief to get some sound sleep).

Stay tuned for the next post: no room at the Inn, so I need to come up with a plan of how to walk the next few days AND find a bed for the night.