It’s not easy to oversleep on a Camino/Chemin, but Hilary and I figured out how on the morning of Day 3: share a room with 4 people who begin to get up and pack their things before 5am. Listen to them rustle around, bump into things, whisper in the small room. Finally fall back asleep after they leave. Realize, a little after 7am, that you’d forgotten to set an alarm and because there is no longer anyone else in the room with you, you sleep well past the time you’d intended. 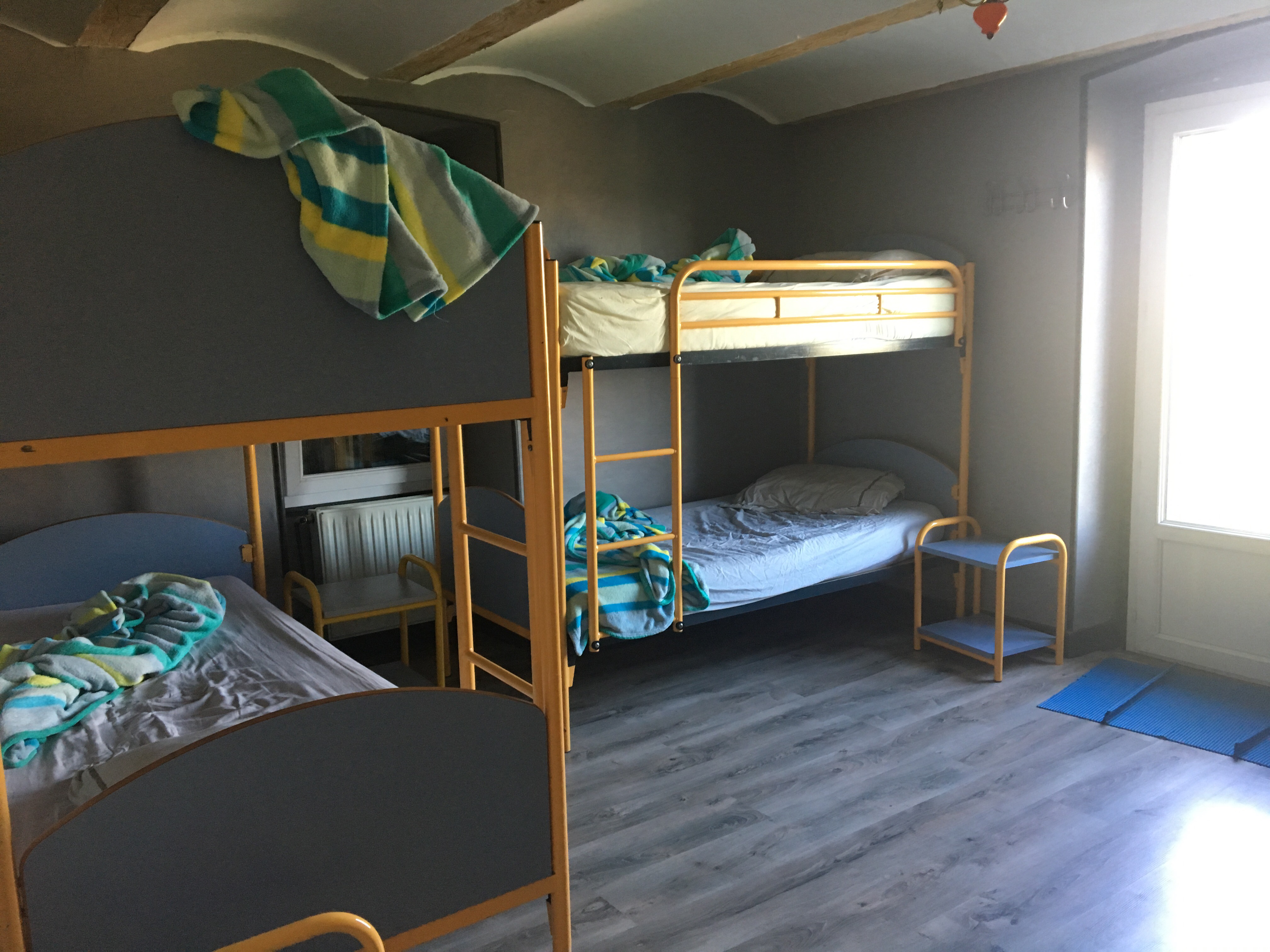 7:15am may still seem early, but I can’t remember another day on any Camino when I’d slept so late. By many accounts, the time we started that day shouldn’t have mattered: we were walking 19km- so not a huge day- and we already had our reservation for the night. But there was one factor that did make this late wake-up a slight issue: the heat.

Somehow, we weren’t actually on the road out of town until nearly 9am. Packing up, eating breakfast (no milk for my coffee, grr), searching for a boulangerie, then an epicerie for fruit… and once we finally got moving, we were sweating within minutes.

“How is this possible?” I turned to Hilary, sunglasses already secured over her eyes. “It feels like we’re walking under a hot, mid-day sun.” I paused to catch my breath, and we weren’t even going up a hill. “This is crazy.” 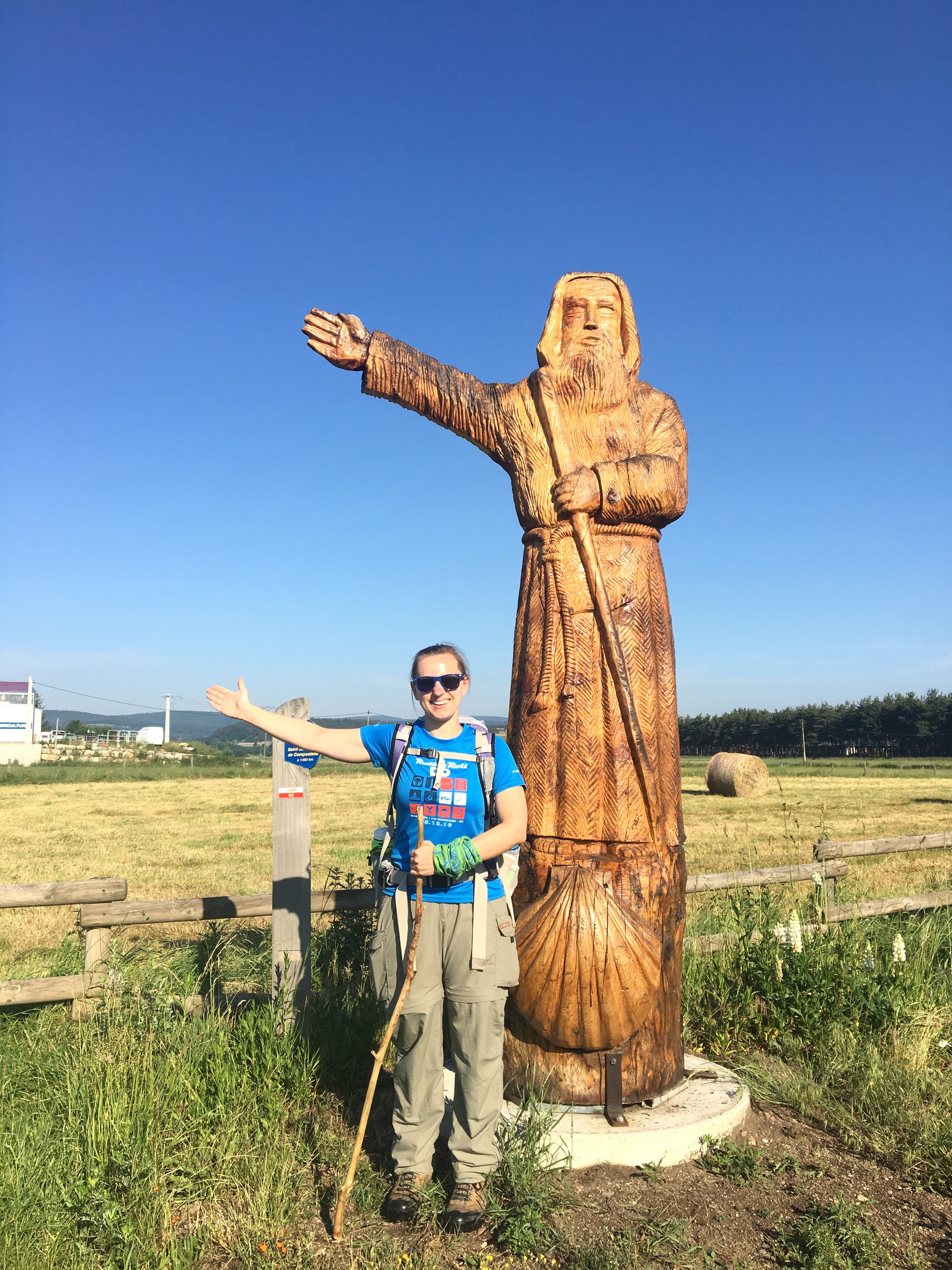 Much of our walk that day was over a dirt track through rolling countryside and deep green forests. The stage wasn’t technically difficult, but the heat was oppressive, and made every step feel like we were climbing a mountain. We ran our buffs under cold water at every opportunity, we listened to music and show tunes to regain energy, and we stopped for breaks. We stopped a lot. 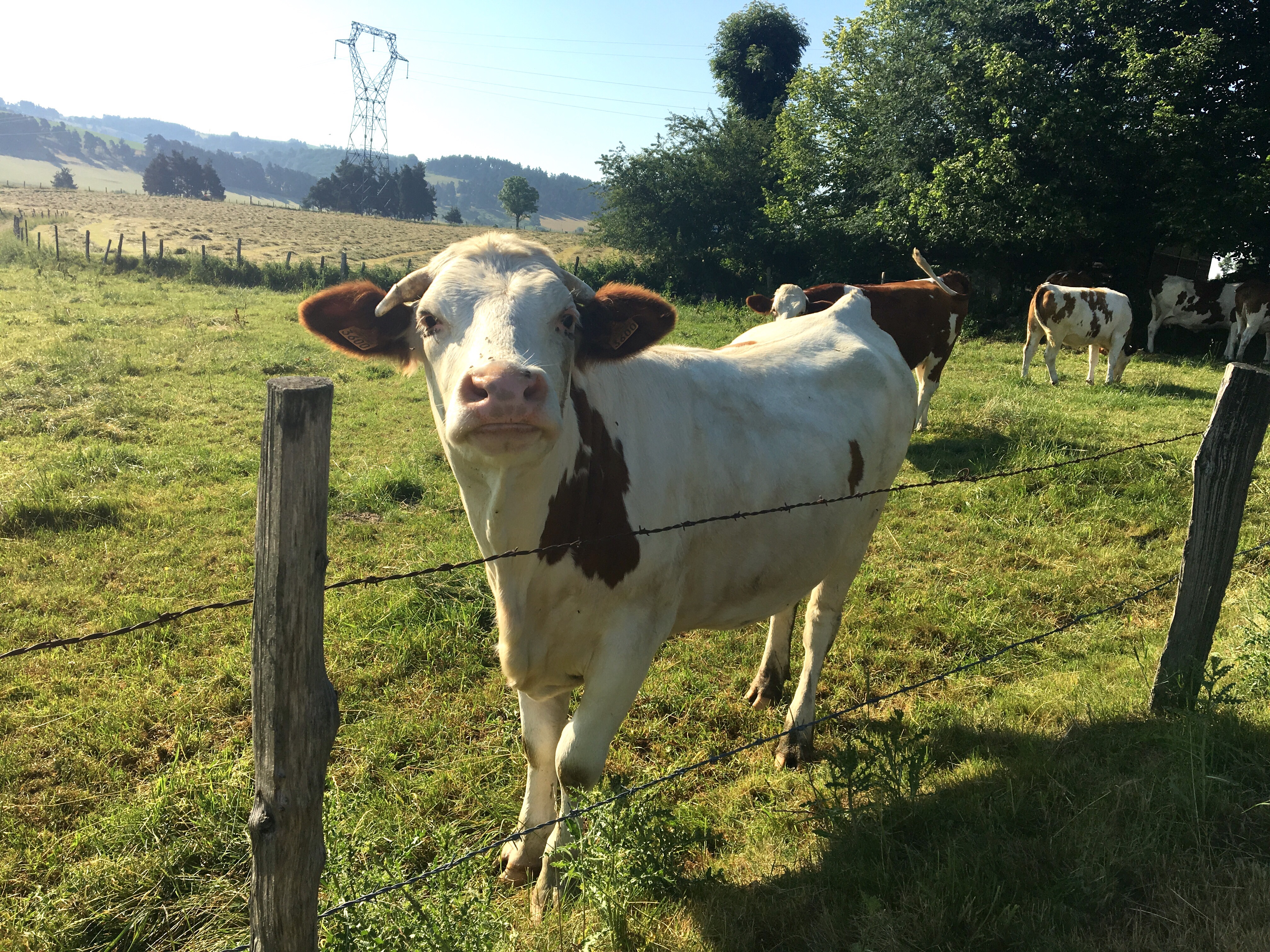 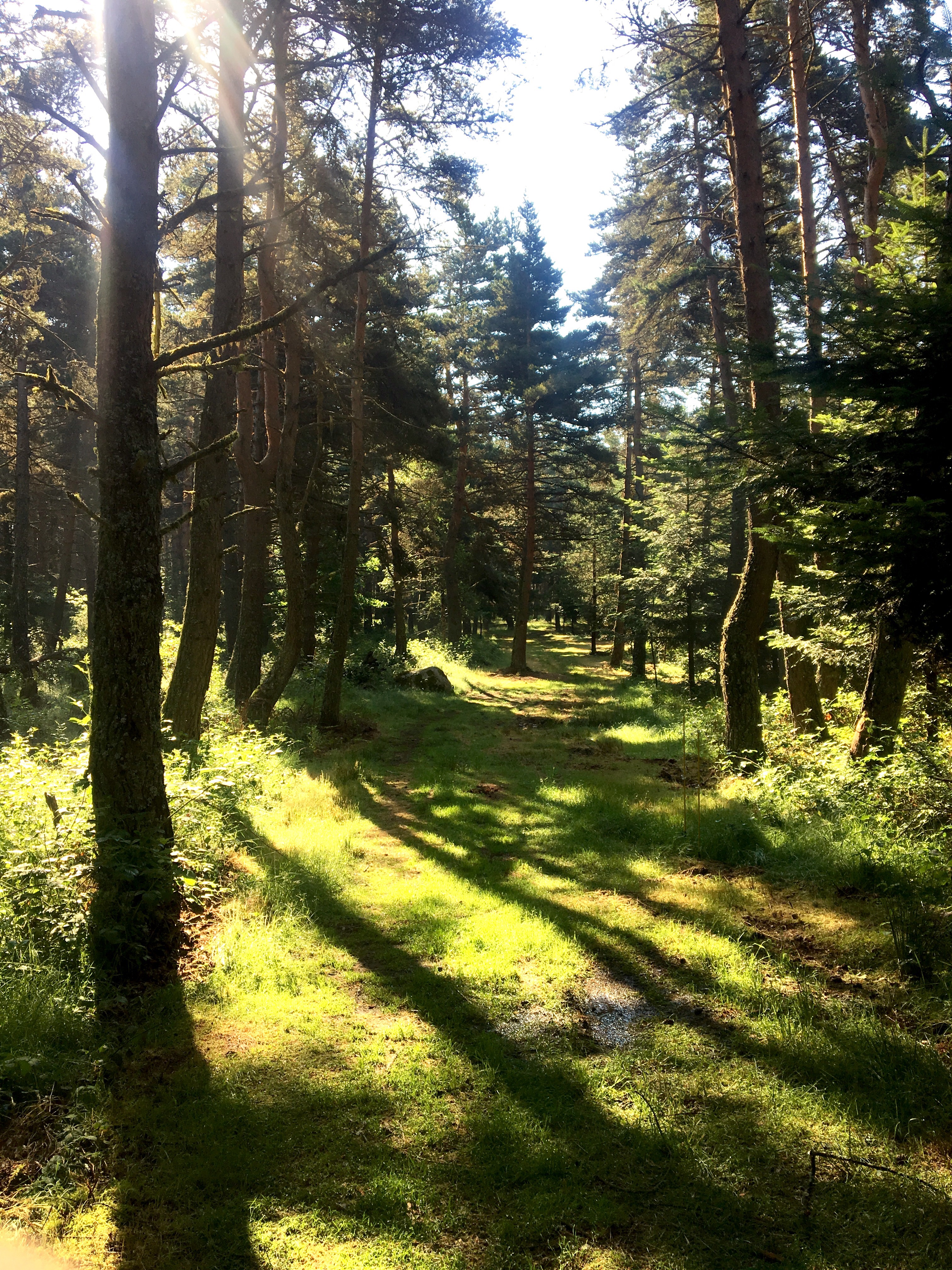 Our first rest was in one of those spots that seems utterly ideal: just as you’re truding along, wishing that the perfect rest stop could appear, BAM! There it is: a picnic table nestled in the shade. This particular spot had an added bonus- a perfectly straight, carved walking stick was propped up against the table. Hilary’s knee had started to act up and we’d been keeping our eye out for a suitable stick, and now here was one that seemed to be waiting for us. 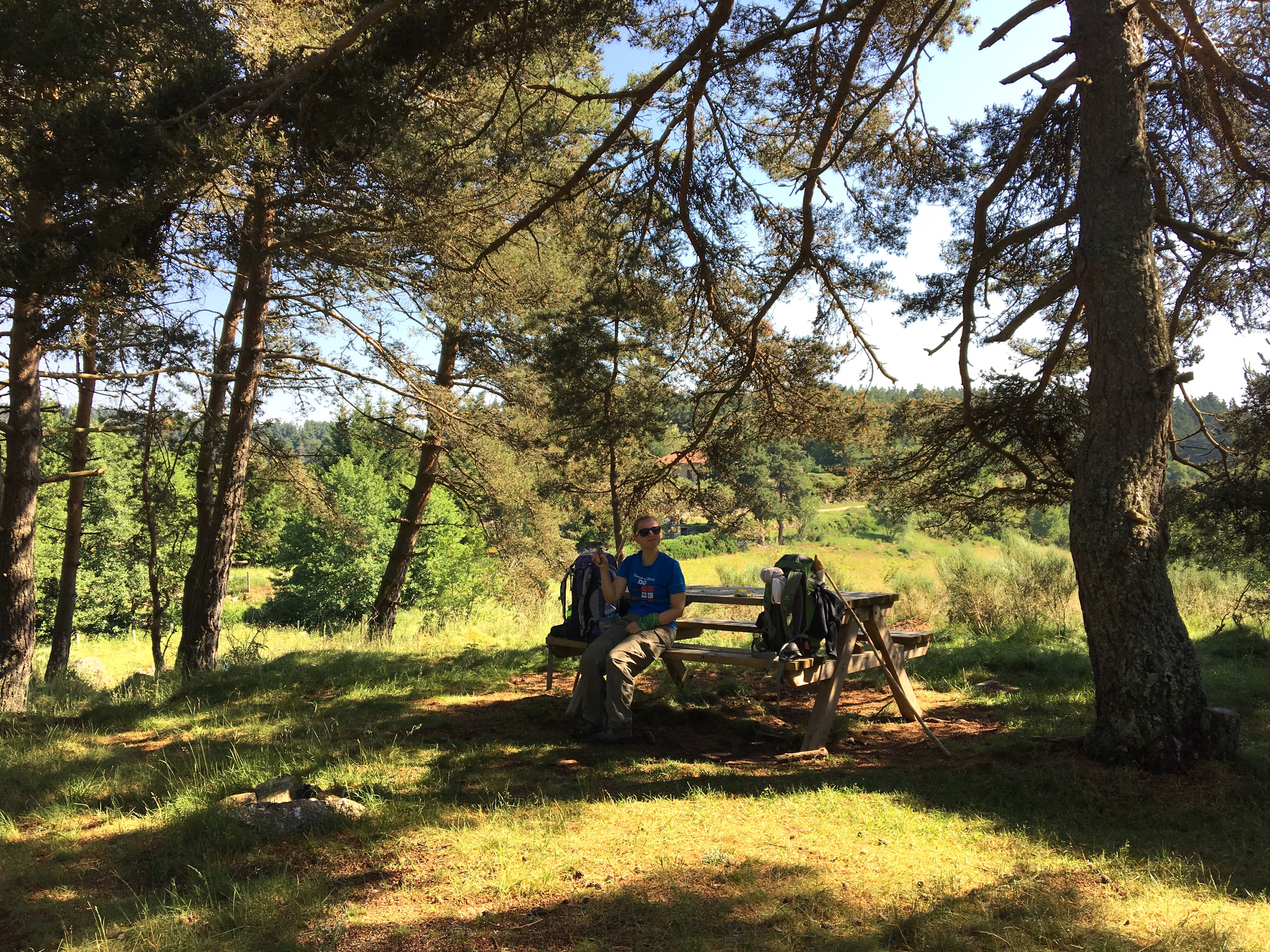 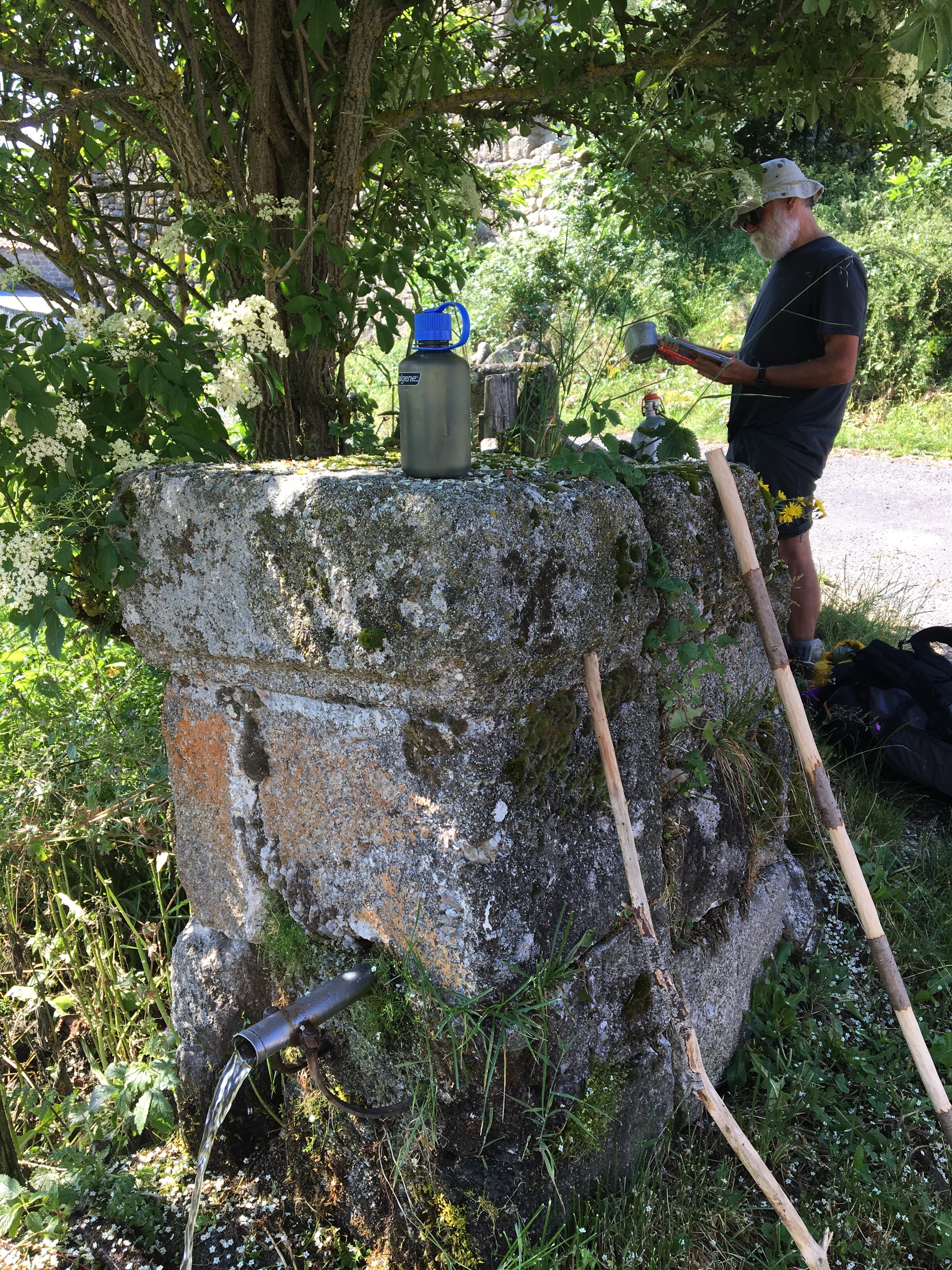 So we marched on, sticks in hand (I’d found mine sometime on my first day- crooked and with some sharp bits and at that point I wasn’t sure if I would keep it or not). More cows, more countryside, and then our second rest stop, a beautiful lawn with cold drinks and umbrella-covered tables and puppies running around. One playful guy got a hold of Hilary’s sock and for a long time refused to let go (he also grabbed onto someone’s walking stick- clearly this dog was meant to be on a pilgrimage). 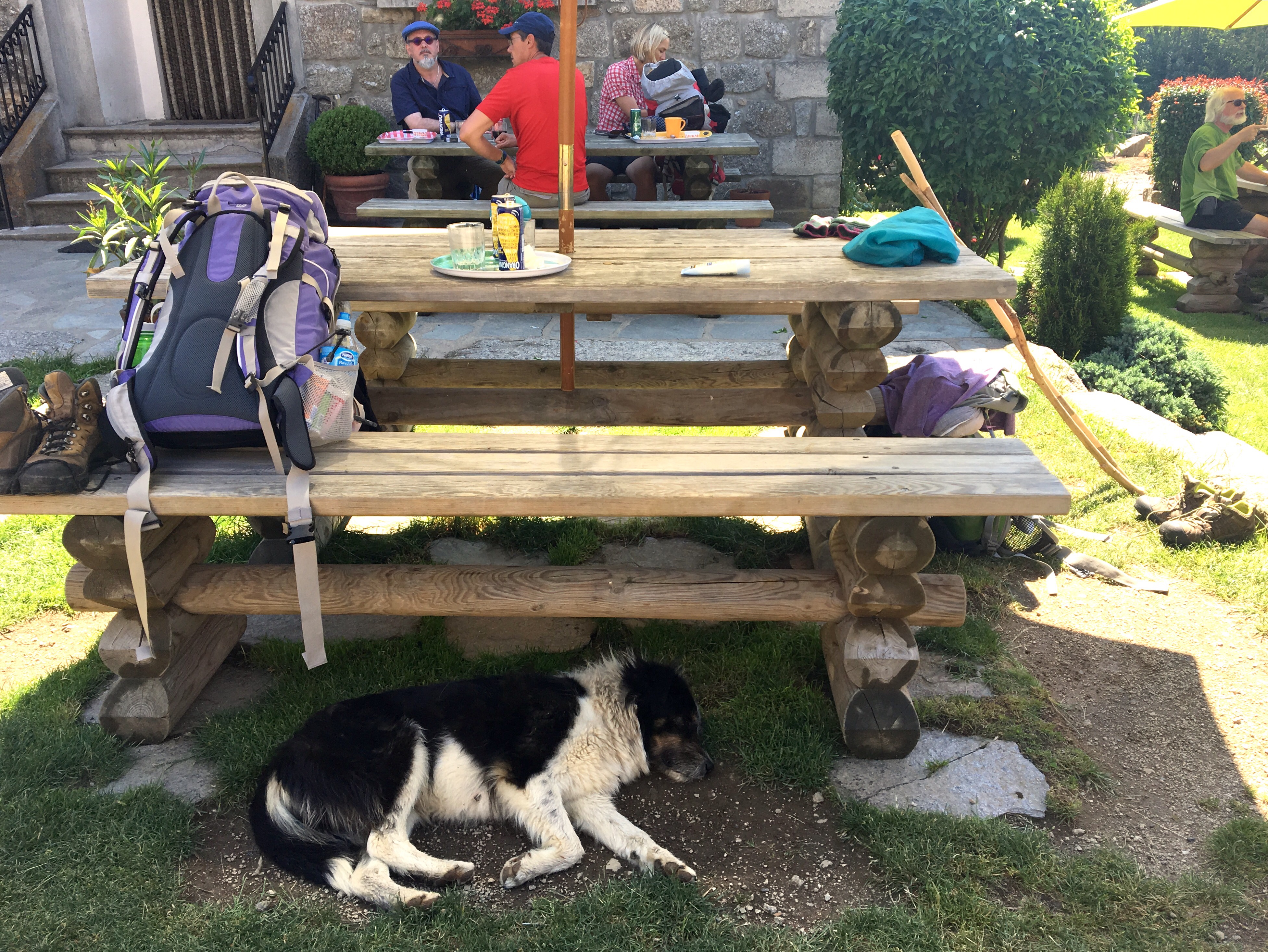 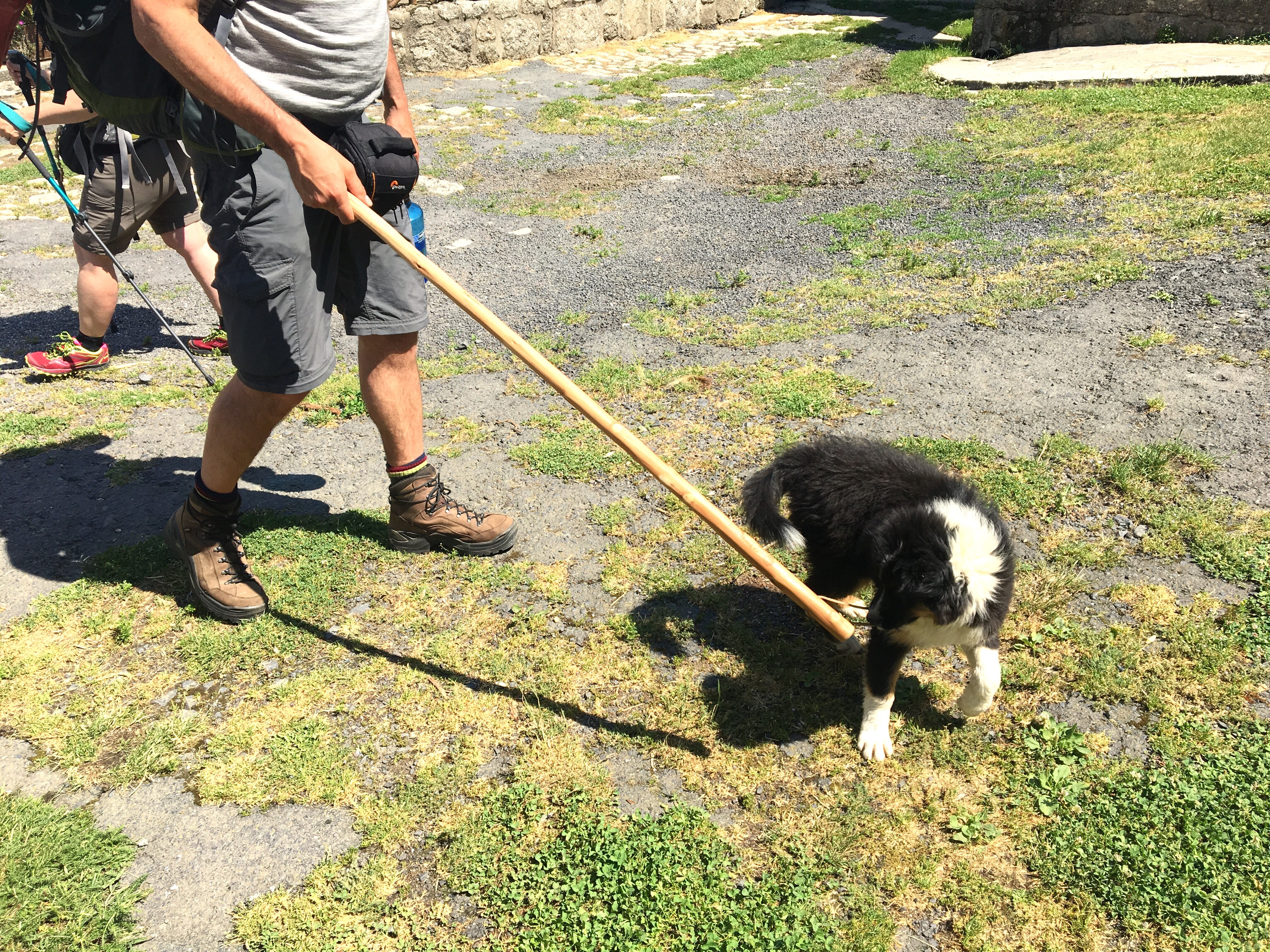 More walking, more resting, and finally we entered the home stretch- a slight uphill section through a forest path that opened up onto a wide-open field in the middle of hills and forests. It was here that the path wound though patches of wildflowers and down to a massive stone complex; the only building in sight (aside from a lone cottage). This is where we’d be staying for the night, in the Domaine du Sauvage. 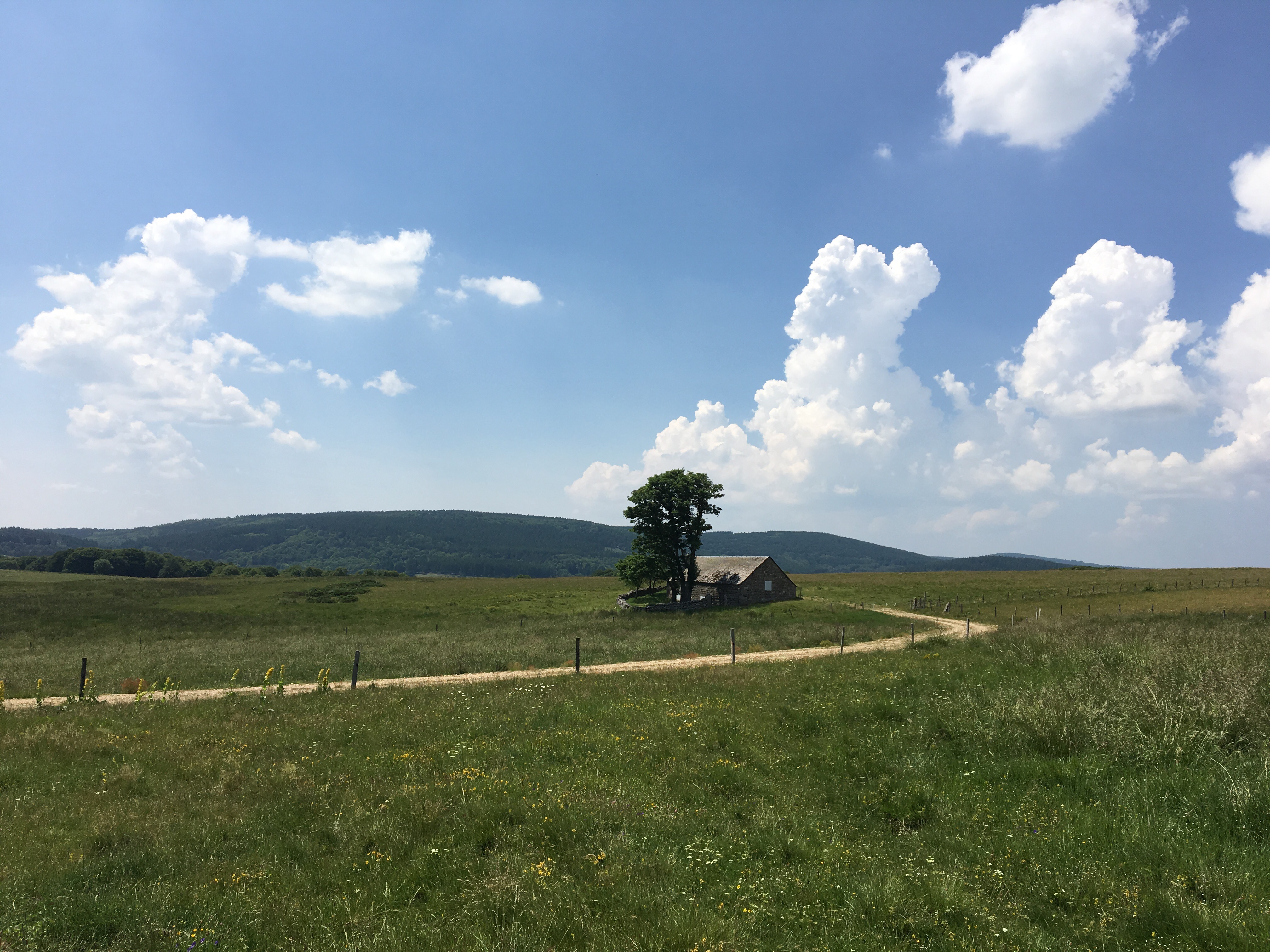 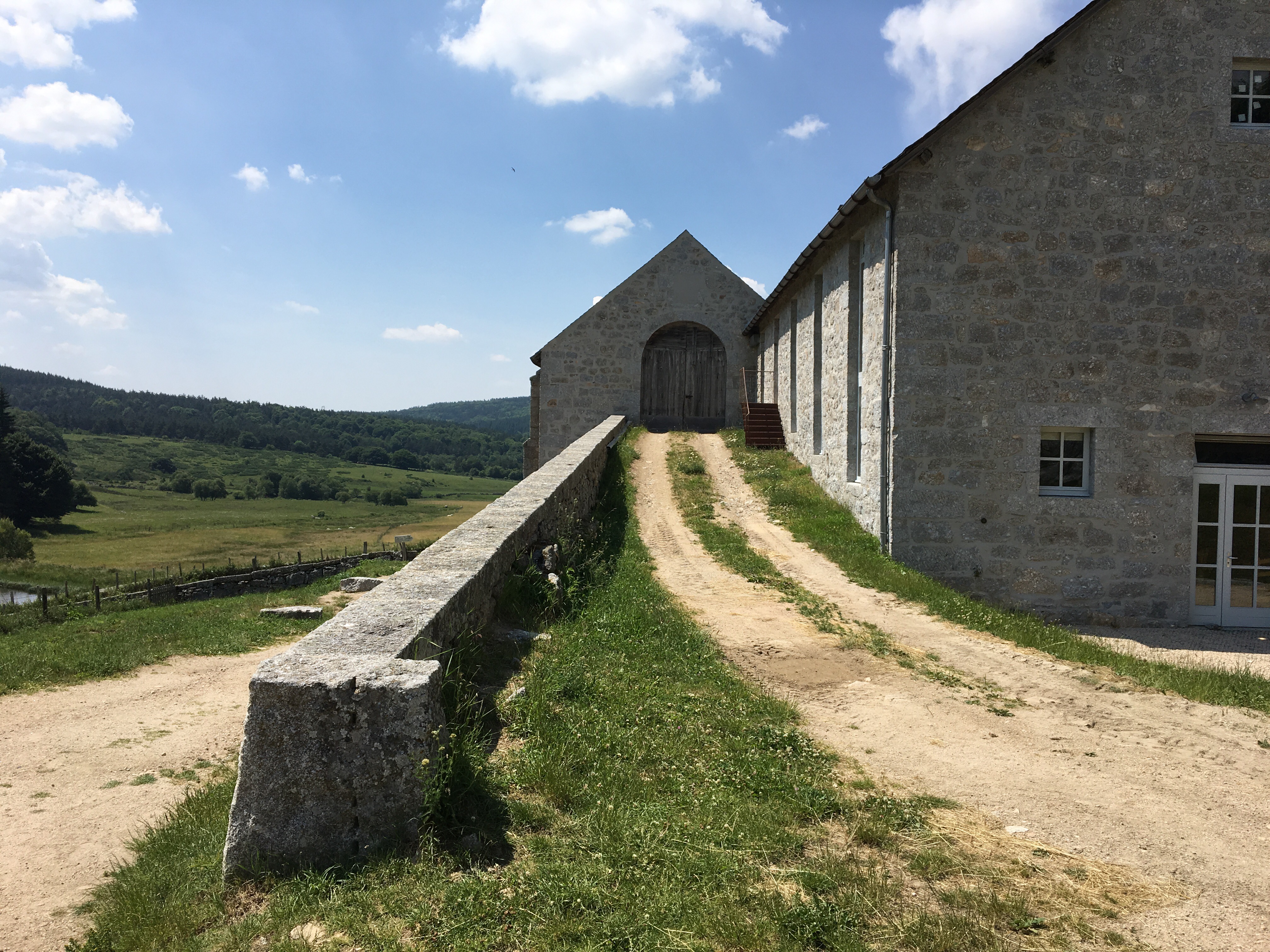 The day before, one of the men in our gîte told me to look up the history of this place and read all about it in English so that we could understand exactly where we were staying. Hilary and I tried, but all the information we could find was in French, and it was difficult to understand and follow. About all I could gather was that we were in a massive farm building, whose granite stones had probably weathered hundreds and hundreds of years of history.

Despite not understanding where, exactly, we were, the place still had a powerful and special feeling about it. Maybe it was the sweeping sky, so vast; maybe it was the thick, anciet stone walls; maybe it was that there was nothing else out here, just this large building that was here for us, for the pilgrims on their journey, all of us arriving by foot like we’d been arriving for so many years. 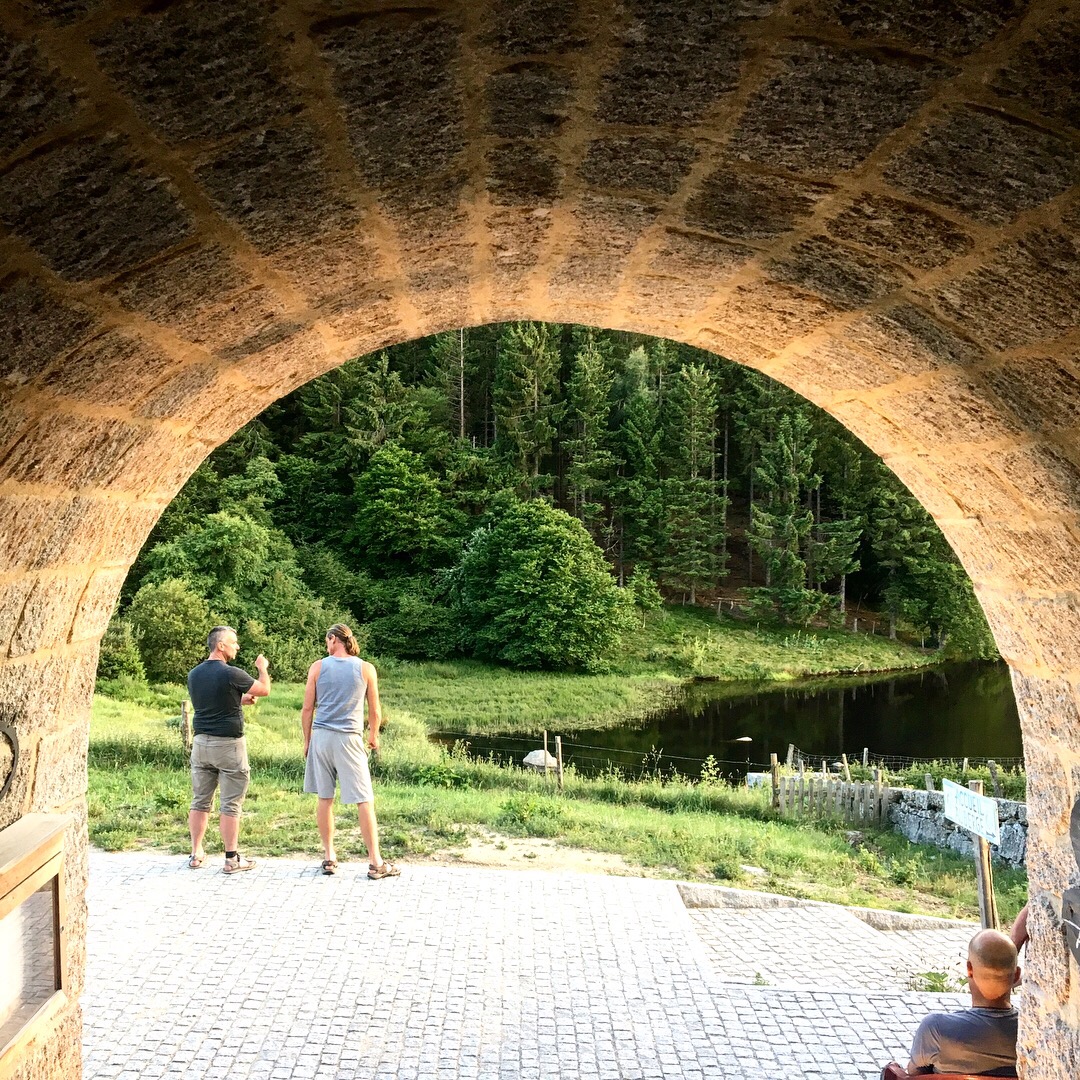 We settled into our room, again waiting for a free and open shower. Once all my chores were done I headed downstairs to the main room/bar/restaurant area to try to make a few phone calls. Hilary would be leaving the next day and I hadn’t thought much beyond these first few days of the trip, the part that I was sharing with her. I needed to chart a course for myself, at least for the next few days, and I needed to call ahead to the gîtes I hoped to stay in, and make sure I could reserve a bed.

But right off the bat, I ran into a few problems. I couldn’t get a cell signal anywhere on the property (everyone else was having this problem too) so I asked a man behind the bar if I could borrow the gite’s phone. Another pilgrim was already using it; she had a notebook and papers spread across a table and was sitting with two other pilgrims, shaking her head with a frown.

“Everything is full!” I heard her say, so I hovered nearby and then starting asking questions. It turns out that she was trying to make reservations not for the next night, but for the following one- Saturday- and she couldn’t find anything. There was a big race being held in Nasbinals, a medium-sized town where many pilgrims ended their day’s stage. I’m not sure how many runners were registered for the race, but I heard the number was in the thousands. Not only was everything in Nasbinals booked up, but so were all the gîtes and auberges and hotels in all of the surrounding towns and villages.

Hmm. I borrowed the phone and made my reservation for the next night and decided to worry about what to do on Saturday later.

Dinner that night was much better than the awkwardness of the previous night, in Saugues. Earlier that evening I’d met Pierre, a French man who had just retired and was walking to Santiago. When Hilary and I found seats at an empty table, Pierre asked to join us. Two older French women also came to the table, along with another American- Stephen, from St Louis (he would be the only other American I’d meet on my trip).

It was a good group. There was a mix of French and English, and a lot of laughter and hilarity. And the meal was another good one (as they all would be): vegetable soup, a beef ragu and potato casserole, a cheese plate with three different selections (the sheep’s cheese was the best), an almond cake (that I couldn’t eat because of my nut allergy but I heard it was delicious). Bread, of course, and wine.

Hilary and I stayed up to watch the sun set; we ate gummy candy and compared notes on the day and I thought about how much I would miss her when she left the following morning. Even though I’ve been doing these Camino’s and treks mostly solo, it had been such a joy and so much fun to be with my cousin. There was so much laughter and encouragement and odd moments and joyous singing and shared misery and I wondered what this trip was going to be like without her. I was happy to be entering into a new phase of this pilgrimage, eager to tackle some big days and capture that pure feeling of freedom that only standing totally alone under a big open sky can give me… but I was suddenly nervous, too. I hadn’t even said goodbye and already I was overcome with such a bittersweet feeling: that happiness to have shared something big and amazing with one of my favorite people, the sadness with having to say goodbye and continue on alone.

But that’s been such a big part of these Camino experiences for me, hasn’t it? Being together, being alone.

We couldn’t hold onto the night forever so we gathered up our notebooks, collected our laundry that had dried completely in the hot sun, and tip-toed up to bed. 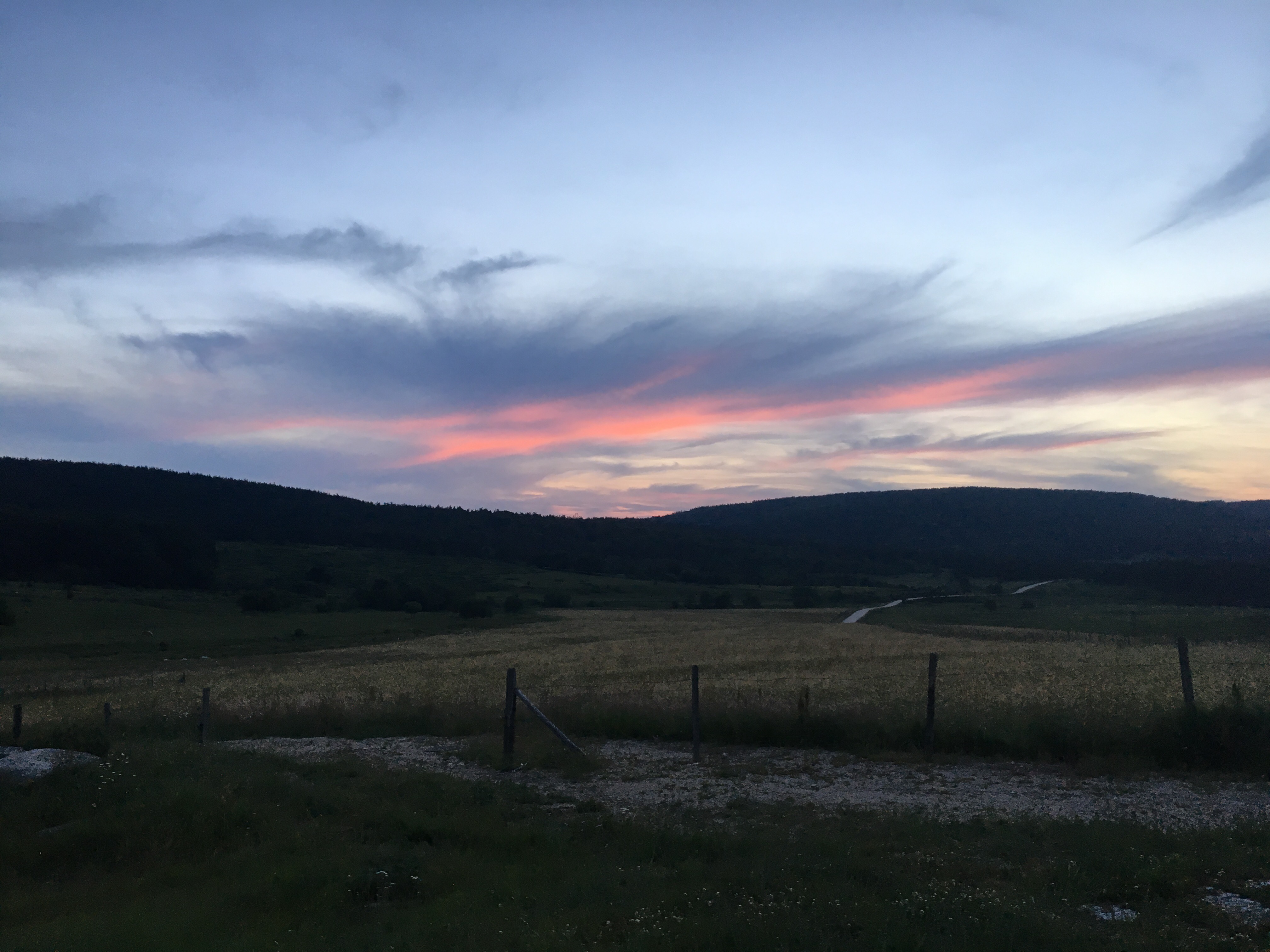