Even though I’ve done this walking thing many times before, it still takes a few days to get into the rhythm of the pilgrim life. I woke up on Day 2 feeling a little disoriented; our room had been hot during the night, and at some point in the night I had flipped myself so that my head was at the foot of the bed, and closer to the window. Once we woke up, we had to tiptoe through the other rooms with sleeping pilgrims in order to get to the bathroom, and we packed our things as silently as possible

And then downstairs to another pilgrim breakfast in France. These breakfasts would all look the same: coffee or tea or hot chocolate, bread and butter and usually at least 3 flavors of jam (many of them homemade), yogurt and sometimes fruit. Once I had a fresh croissant brought over from the boulangerie two doors down (this wouldn’t happen until nearly the end of my trip, and oh what a good morning that was!). I really loved the breakfasts on the Chemin, bread and butter and coffee are my preferred breakfasts at home, too, and it was such a treat to come downstairs every moring and have a spread laid out for us. Unlike on other Caminos, I never had to walk before my morning cup of coffee (well, actually, I had to do this on my very last day but you’ll have to wait for that story). 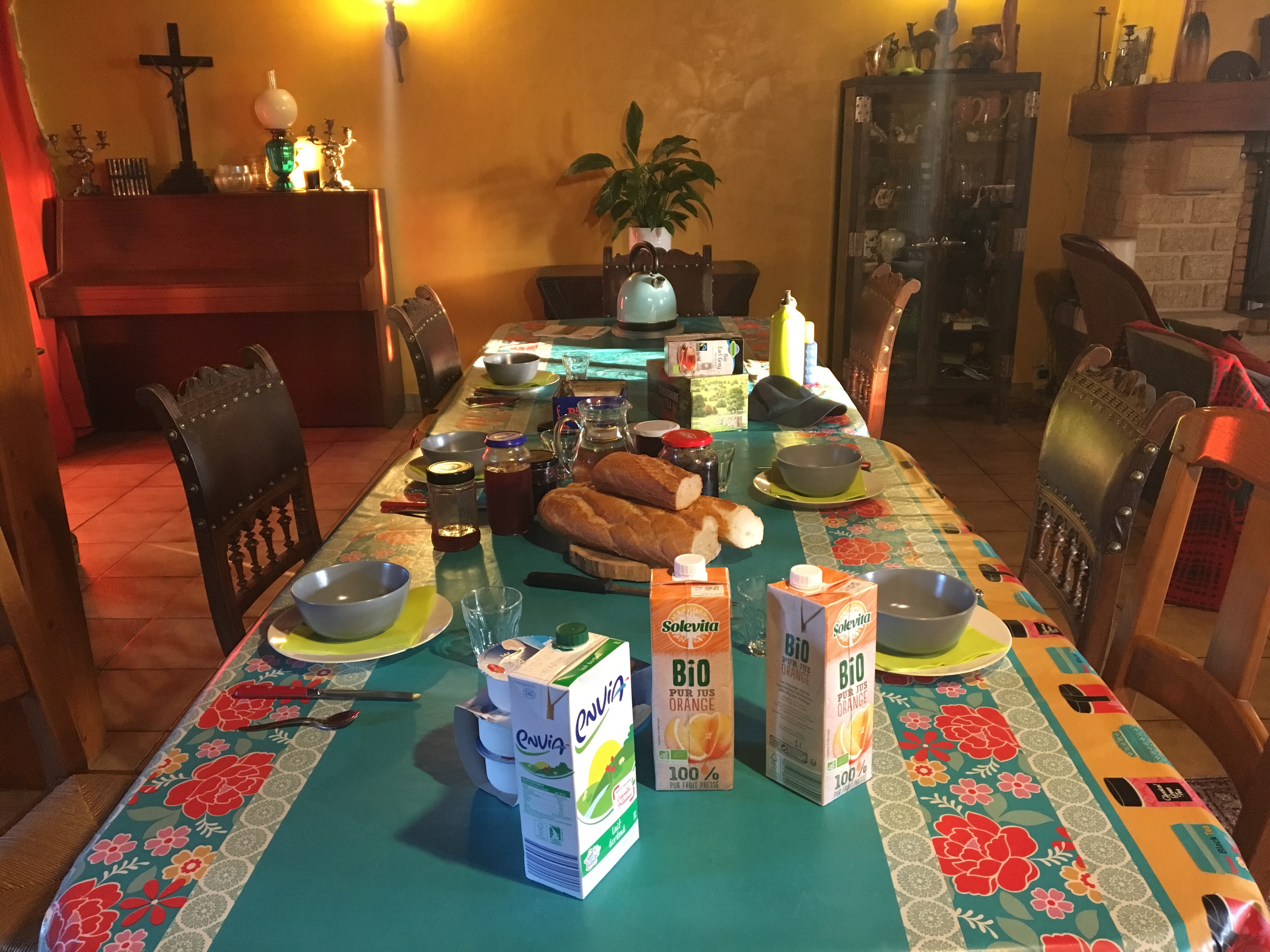 So after fueling up and rearranging things in our packs, Hilary and I headed out for Day 2. The morning was soft and beautiful, and the beginning of the walk was stunning: we were headed into the hills, climbing above the clouds and looking out onto views that stretched over the countryside. 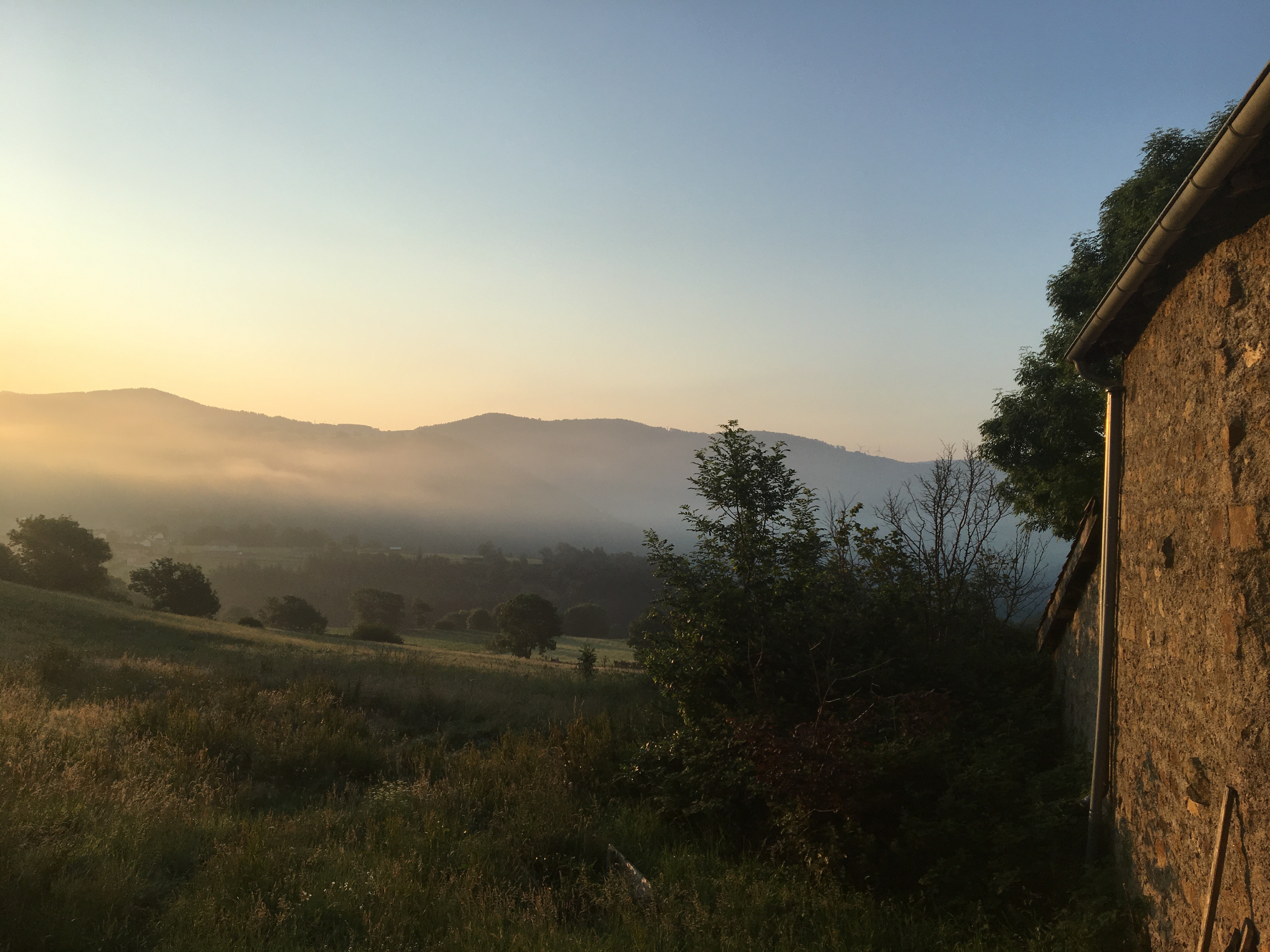 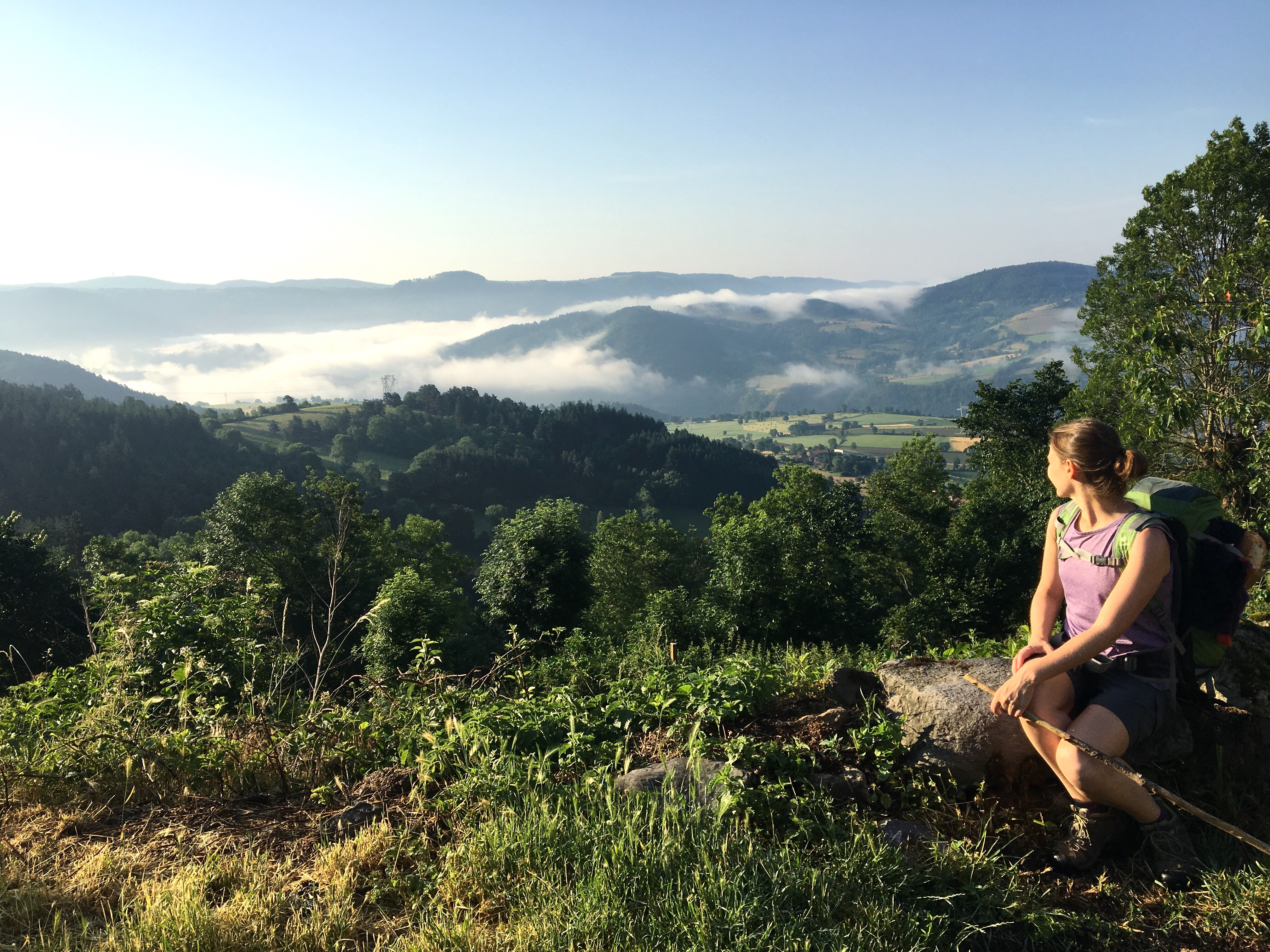 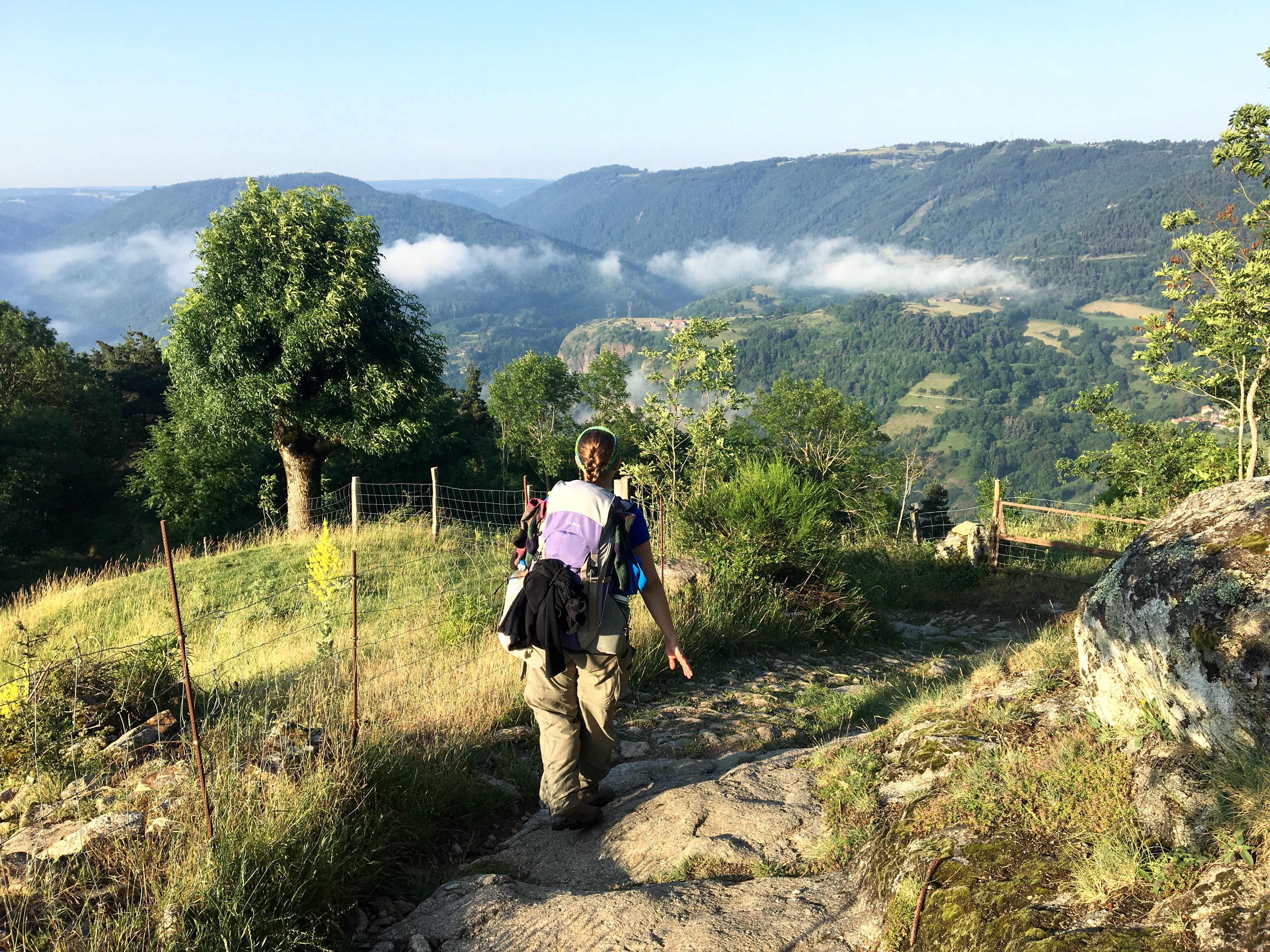 There was another beautiful view that I loved seeing France, but one of a different sort than the sweeping landscape: the WC. France nails it with their public bathrooms; not only would you sometimes come upon a little shack in the middle of the trail (usually not much more than a toilet, but it’s still a good option), but in so many of the small villages and towns you would always see a sign pointing you towards the nearest WC. Some of these toilets were, ah, quite adventurous, but I appreciated them all. 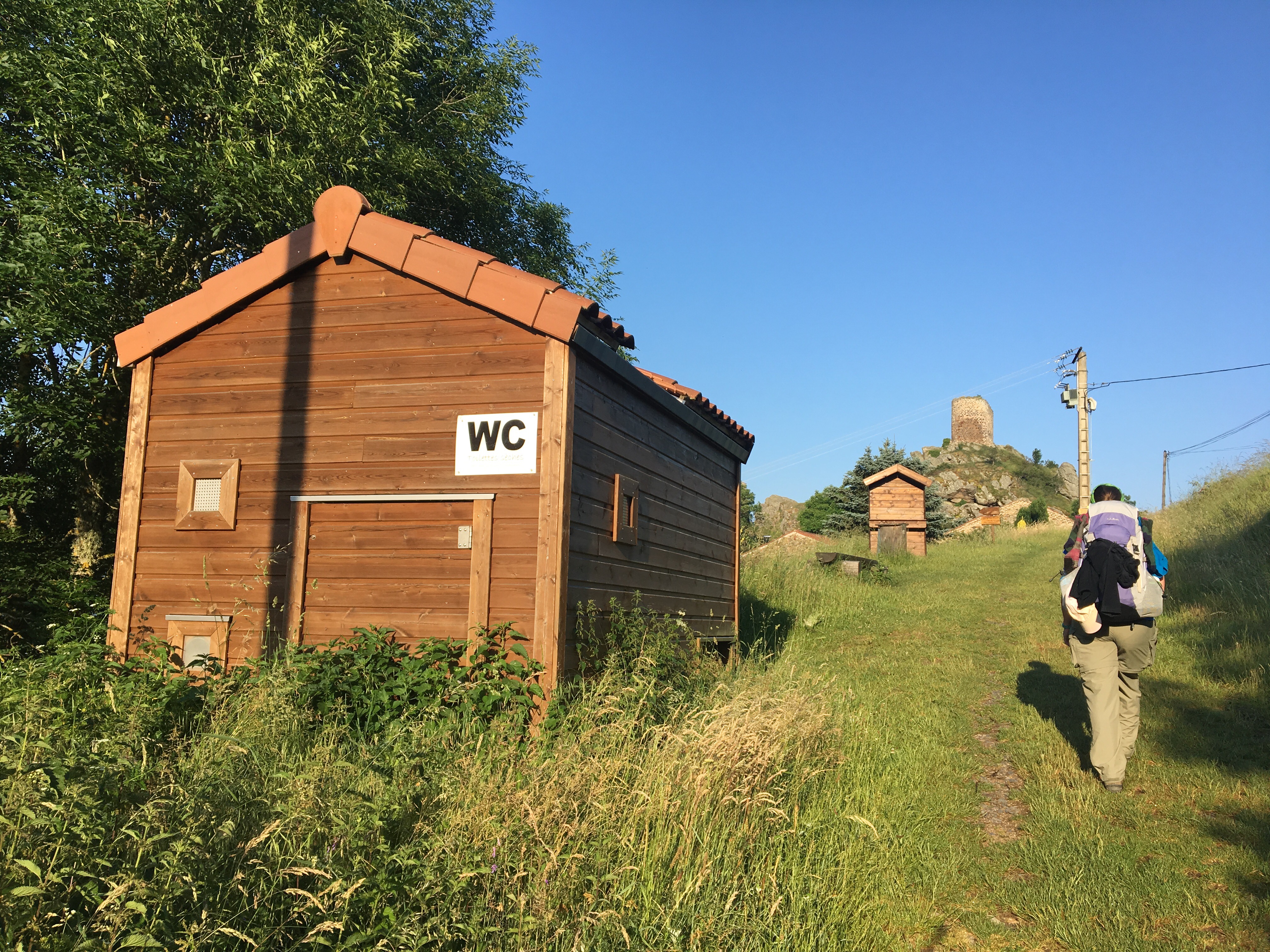 Our morning was wonderful, and despite the increasing heat, Hilary and I were both in really good spirits. After about 5 or 6km we stopped in the small village of Monistrol-d’Allier for a coffee and a snack; this would be just before starting a long and diffficult ascent and fueling up seemed like a good idea. 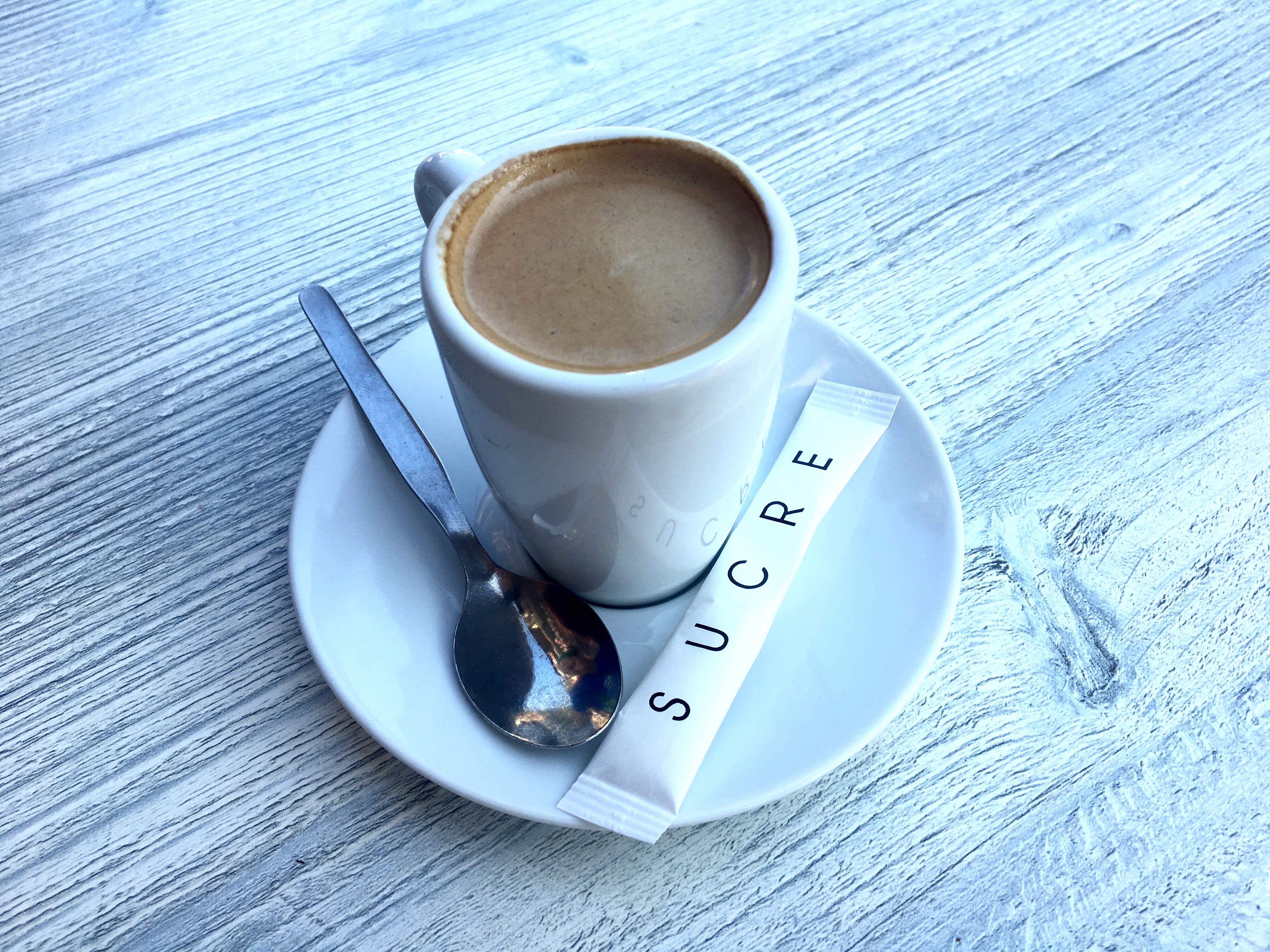 We ran into Mario, our French translator and fellow pilgrim from the night before, and he told us about the amazing sandwiches the cafe could prepare for us to take along. He held up a wrapped sandwich that was roughly the size of his head. “Local goat cheese with a carmalized onion and fig compote,” he said. “You don’t want to miss this.”

Hilary and I were both already a bit loaded down with food; we’d picked up Babel cheeses wrapped in wax that could last the journey, as well as little sausages and a loaf of day old bread. Suddenly, our lunch options didn’t seem so appetizing, and we made what I think might have been one of the best decisions of the trip: to buy the sandwiches with fresh and local ingredients. (Later, we spread out on the grass for a long picnic lunch and those sandwiches were, indeed, the best sandwiches I’d ever tasted. It helped that we’d walked a long day and were hungry, but then again we were also in France, where the food truly is top notch).

Our packs now even more weighed down, we began our ascent. The guidebook we were using (along with all the French) was the Miam Miam Dodo. It breaks down each stage into detailed sections and shows either a green, orange, or red line (going up, down, or flat) to illustrate the difficulty of the grade of the route. Green is easy, orange is tougher, red is difficult. And very quickly, we came to regard the red line (especially a red line going up), as the enemy. 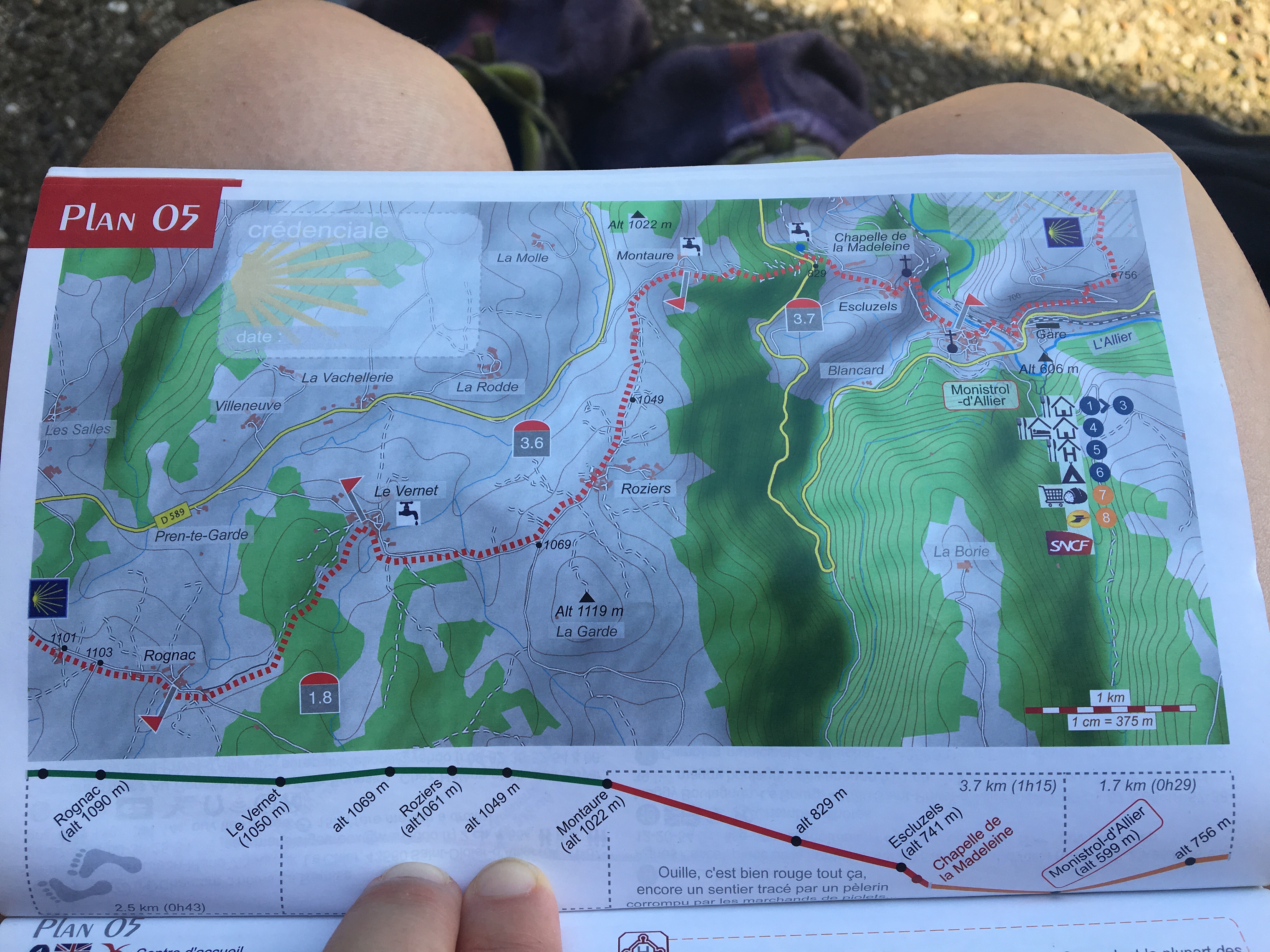 We began a nearly 4km stretch of ‘red up’, and remember, this was during the European heat wave. We were drenched in sweat within minutes. We criss-crossed on the trail in order to find tiny sections of shade. Water breaks were only taken in the shade. The buffs came out, and for the first time on any Camino, I discovered the momentary delight of running the buff under a cool stream of fountain water, then wrapping it around my head.

But despite the heat this continued to be a good day. Other highlights included: stopping in a chapel carved into the rock of a hillside, our first walk alongside a line of cows, a kind man resting in the shade of a tree who gave us cherries, the wooden carvings lining the entrance to Saugues- our destination for the evening. The day’s walk was only about 17km (but with the ascents and heat I wouldn’t call it an easy day), but it meant that we had time for long, leisurely breaks, and still arrrived to our gîte an hour before it opened. 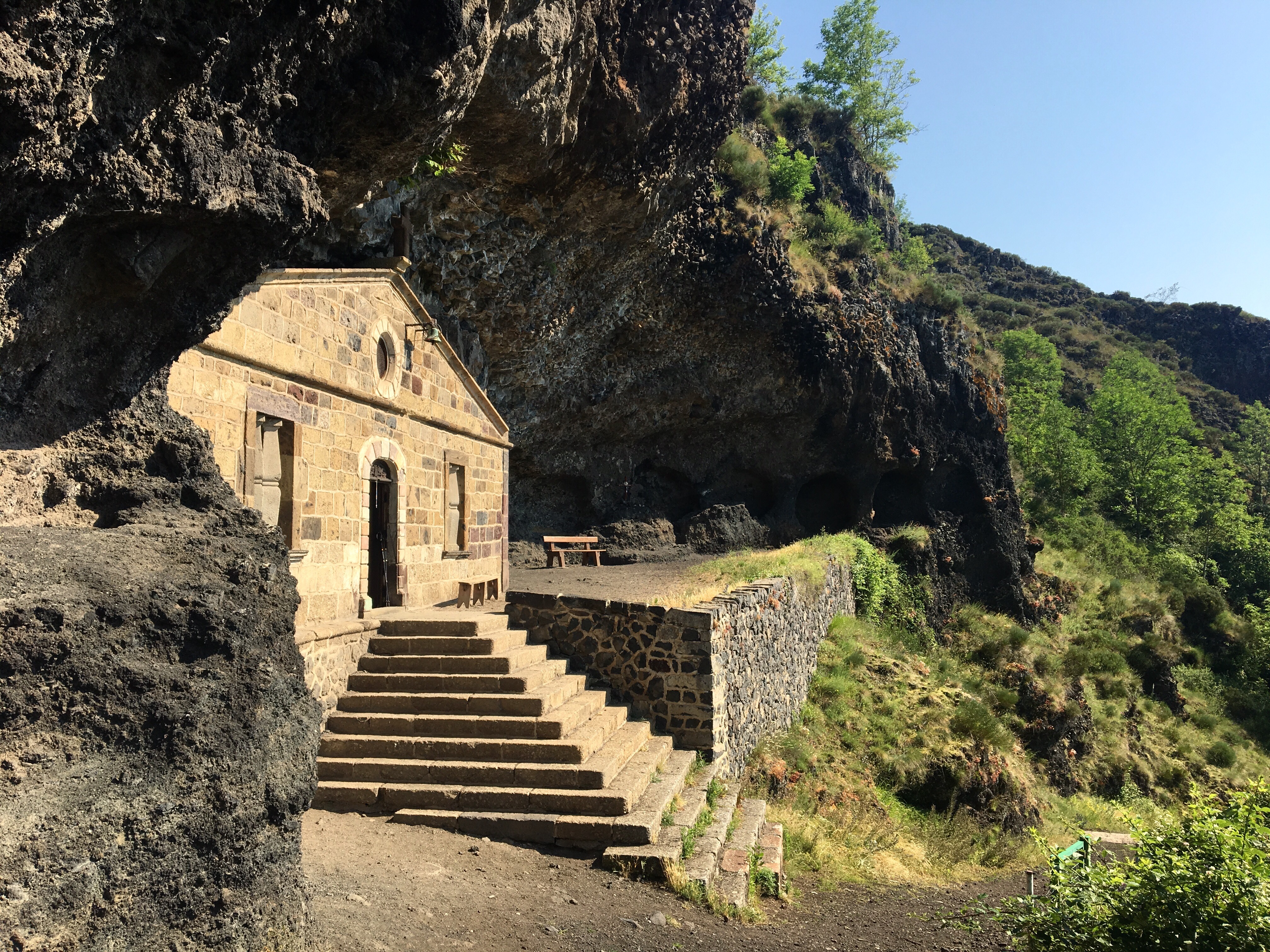 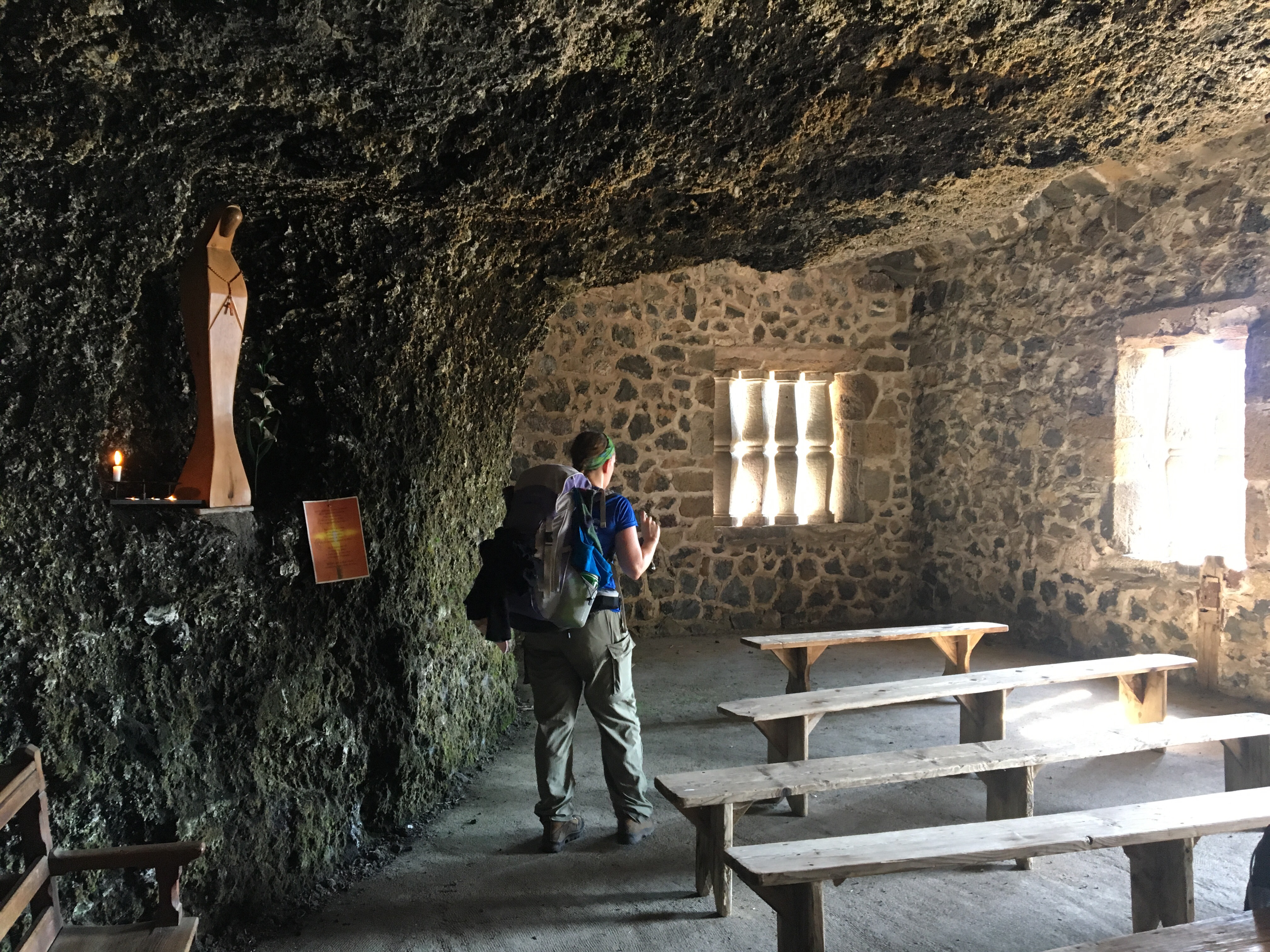 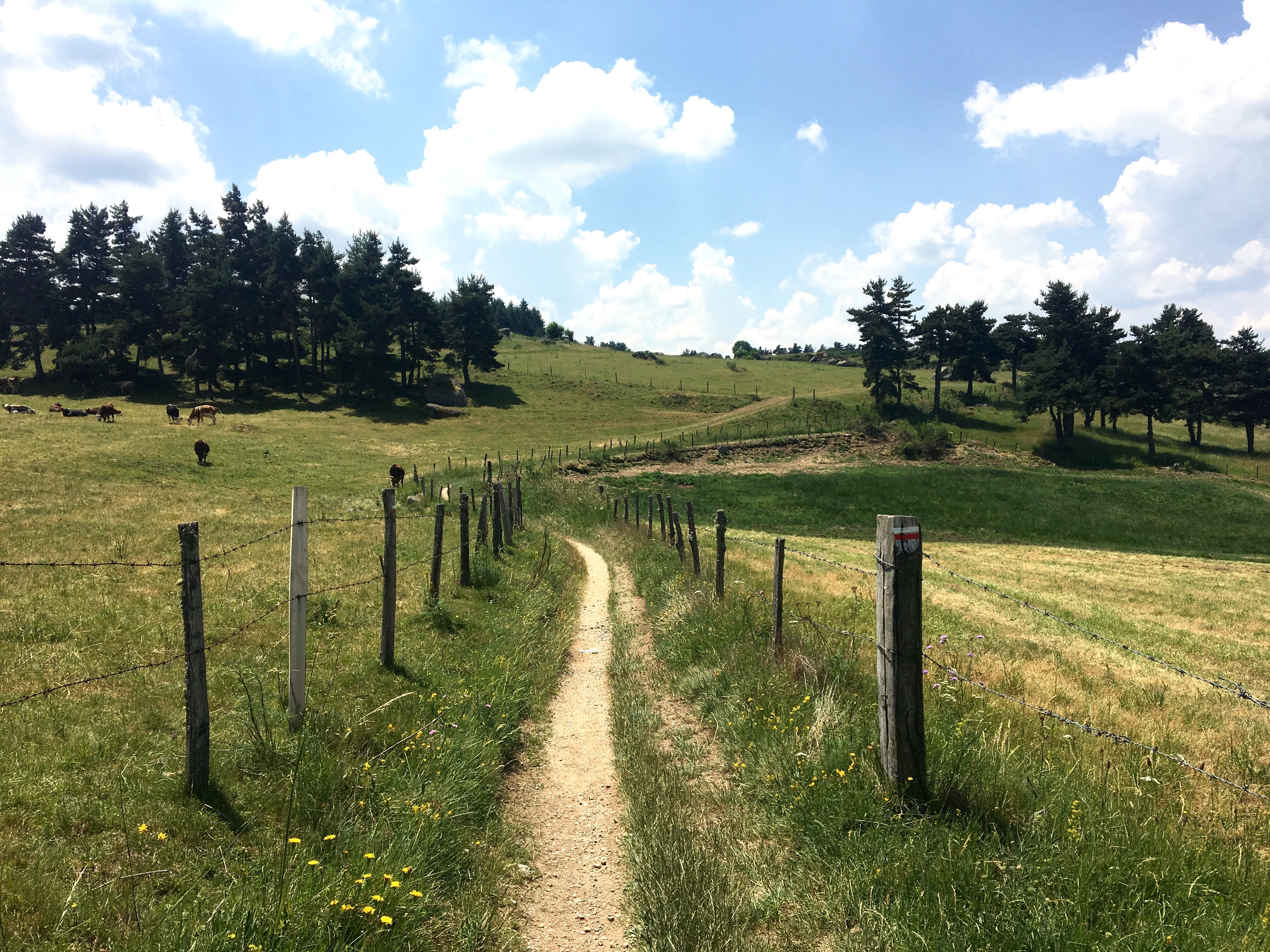 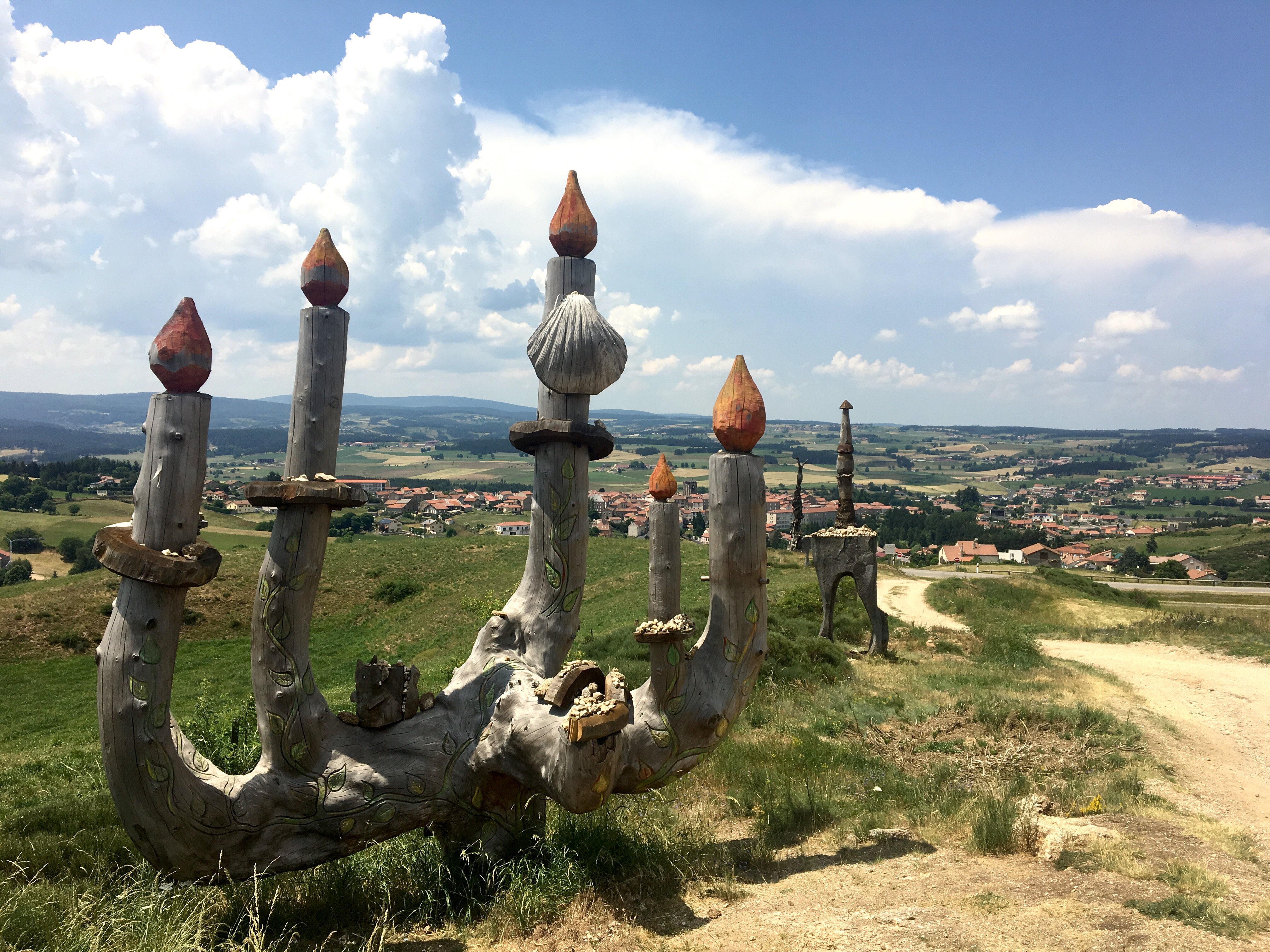 But once we did get inside, we discovered that there was only one shower for 8 pilgrims (this, too, would become a theme of the trip). There was a lot of waiting around in our sweaty clothes, a storm rolled in and cooled off the air a bit, and once we were finally cleaned up we headed into town to explore and find some ice cream. 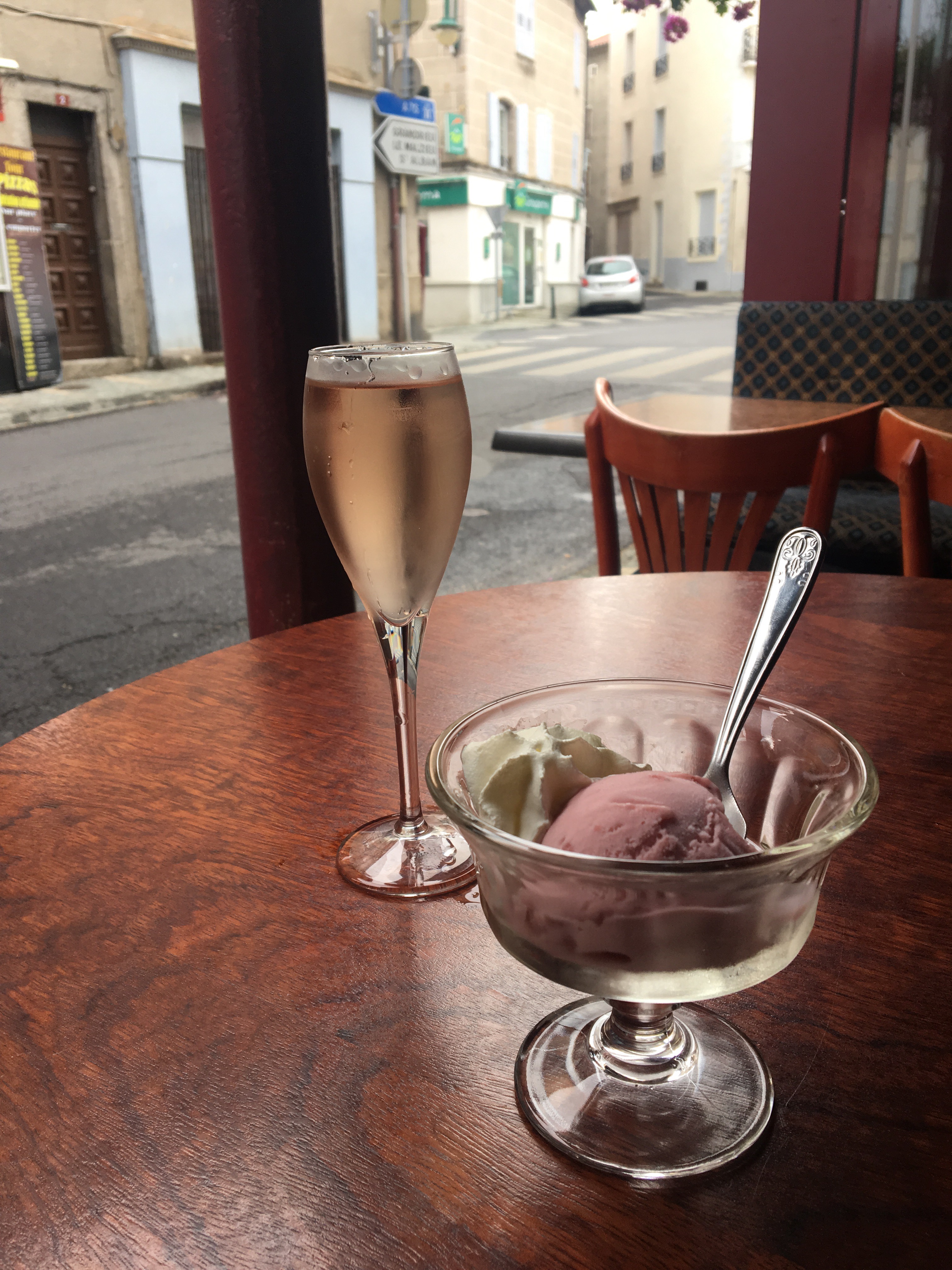 Dinner that night was, in a word, awkward. I don’t even know if it would have helped much if my French were stronger; the combination of people around the table was not a good one, and there were a lot of long silences. Then, when dinner was over and the owner of the gîte was trying to arrange a breakfast time, there seemed to be a tense moment. The group of 4 pilgrims staying in our room were pretty insistent on ther 5:30am start time (the only time I would see anyone leave this early on this Camino), and the owner of the gîte didn’t want to serve breakfast that early. There was a lot of back and forth that I didn’t completely understand, but it was finally understood that we’d all help ourselves to breakfast, whenever we decided to get up. (All the while, in the background a radio played 90’s soft rock and sometimes I’d just disengage from trying to understand the conversation and instead tune into Whitney Houston and Celine Dion).

Hilary and I escaped once dinner was over and headed back into town for a pre-bedtime glass of wine, and when we returned to the gîte we sat outside with the kind dog, watching the day’s light fade to black, strains of soft rock drifting through the air. 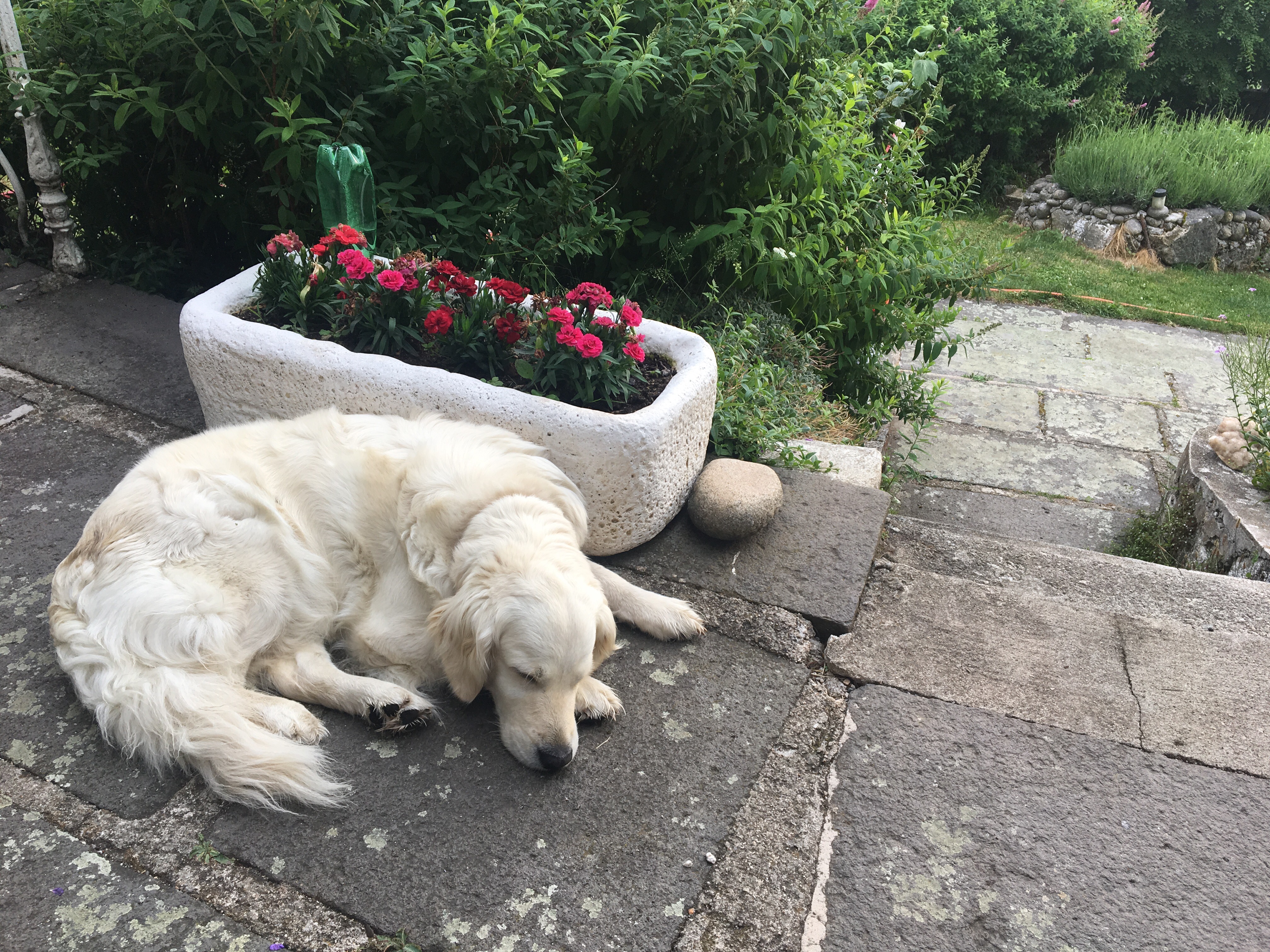