As some of you may or may not have noticed, I am quite behind on my Chemin Le Puy blogging updates. In fact, the walk is already over, the two weeks have come and gone and three days ago I arrived at La Muse, where I’ll spend the next three weeks writing (and hiking, and staring off into the green mountains). 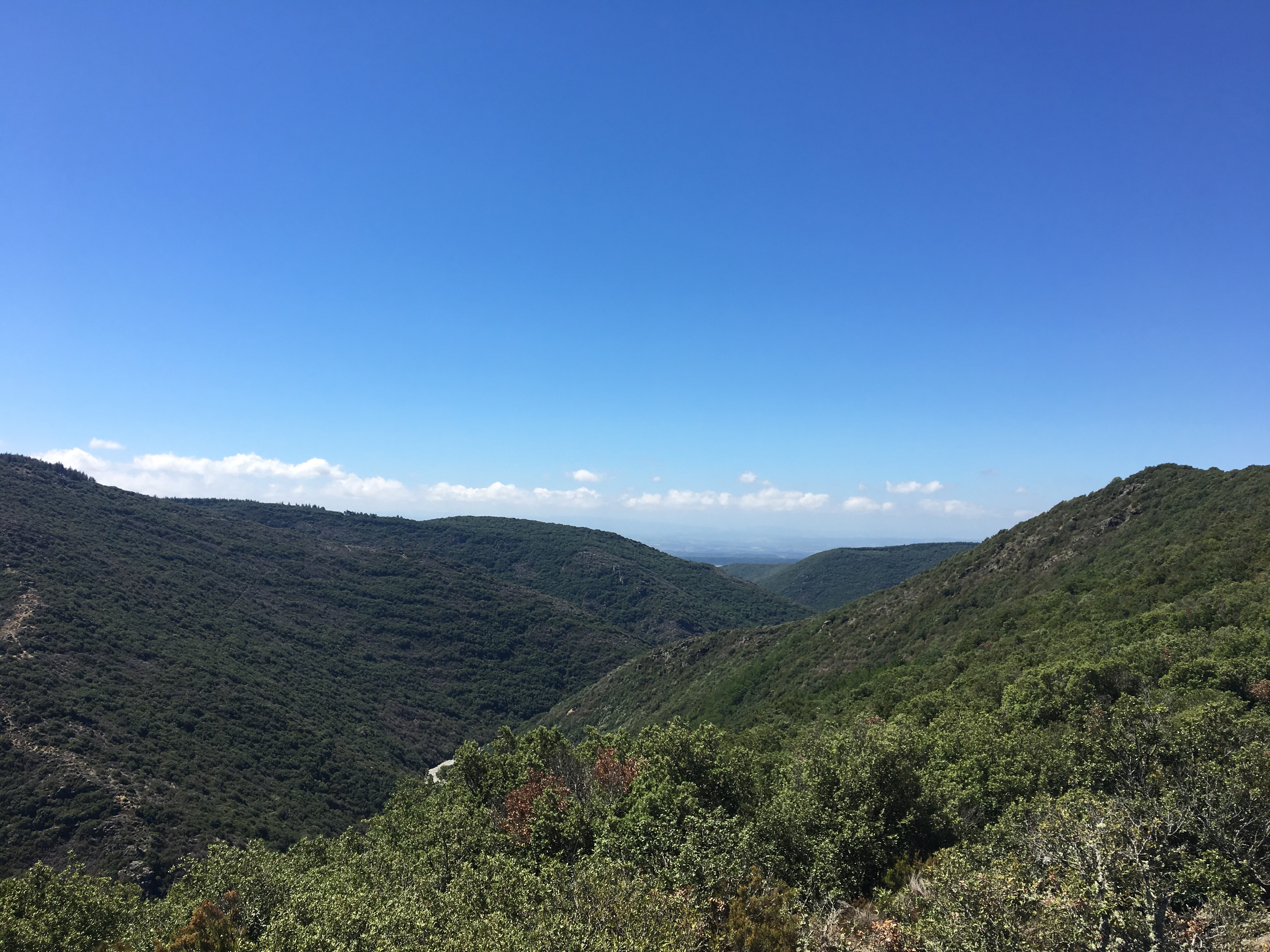 I want to try to post as much as I can about my walk, but those posts might not start rolling out for at least a few more days. And the biggest reason for this is because I don’t really have the means to write them.

It’s like a strange riddle: how can I be a writer at a writer’s retreat and not have the tools to write? In the past I’ve traveled with a lightweight, foldable keyboard that I hook up to my iPad and it’s worked brilliantly. That first keyboard stopped working at the end of last summer, so I bought myself (what I thought was) an identical replacement. Here’s the first lesson of the summer: always check your equipment before setting off for a 6 week trip.

This keyboard is a mess. Quite frankly, I hate it, and I know those are strong words but it’s hard to convey my frustration. For example, it took me a solid 20 seconds to type the word ‘convey’. My fingers hit the keys and some of them take, others don’t. I press harder and the same letter shows up three times, others not at all. If I type really slowly and carefully it’s okay, but I move at a snail’s pace. I can write much faster by longhand (and for a fast typist, this is totally inefficient).

I realized the keyboard was a problem while on the Chemin, but I sort of thought that it might just take some getting used to. It didn’t. So this was a big reason I didn’t blog while on the walk: posts took forever to try to write, and I didn’t have forever. I don’t have forever here, either, but I certainly have more time to sit and tap out a post (even if it does take me 10 times as long as it normally would).

Okay, this rant is over. Yesterday I ordered a new keyboard and it should be here soon, and then the writing can commence in ernest.

In the meantime, I want to write a few general thoughts about the trek I just completed, as well as what it’s like to be back at La Muse for a third time.

It may be too soon to say, but I like the order of things. Two weeks walking, then three weeks at a writer’s retreat. Two weeks of movement, long days of activity, unpacking in a different place every night, repacking every morning and moving on. A constant rotation of faces and voices. Introductions and goodbyes, every day. And just as I was beginning to crave permanency, just as I was wishing I could dry myself with a full sized towel and not have to roll out my sleeping bag liner every night, just as I was longing to keep the same people beside me each evening… the walk ended, and now I’m able to do and have all these things I’ve wished for.

That being said, I’m also missing the Chemin and the walking and the constant discoveries. My French was just starting to improve. I was understanding conversations much more easily and on my last night was translating for a German girl who couldn’t speak French. As I’d drift off to sleep, conversations and voices in French would replay in my head.

And I was also getting into the walking. I felt pretty strong from the first day, but it always takes my body time to adjust to a long walk. And after 10 days I was feeling really, really strong. Which was just in time to finish up the trek and transition to something new. 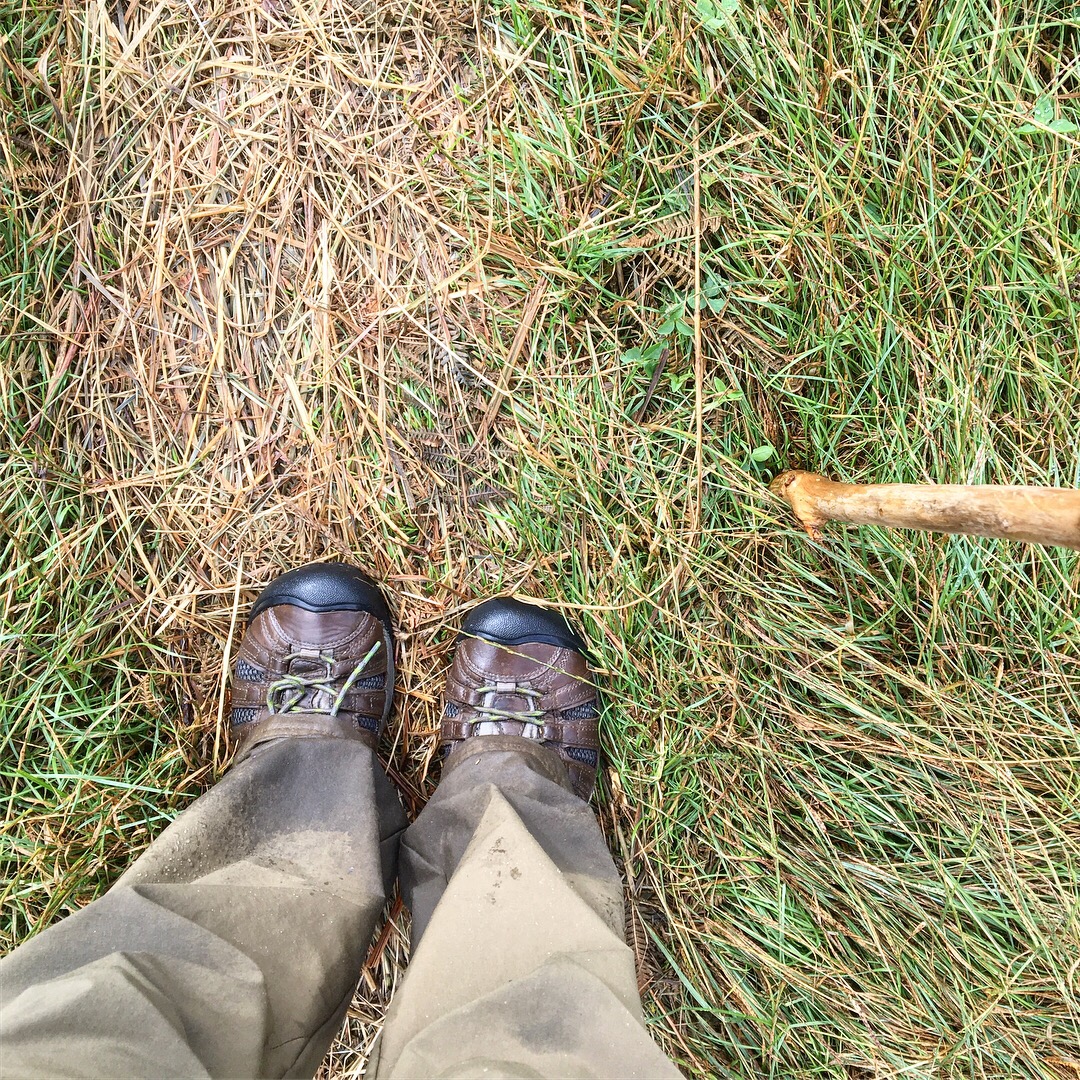 Walking the Chemin in France was both different and similar to walking the Camino in Spain. I’ll explore all of this in my posts about the walk, I’m sure, and for now I’m still reflecting on the comparisons. There was definitely a strong feel that we were all on a road leading to Santiago (even though most people I met wouldn’t arrive there, at least not any time soon); the spirit of the Chemin, the Camino, was strong. There was a sense of comraderie and support, there were brief converstions that yielded strong connections, there were beautiful churches, there were coffee stops, there was rain, there were blisters (none for me, thankfully, but I saw a few that were bad enough to end the pilgrim’s walk). 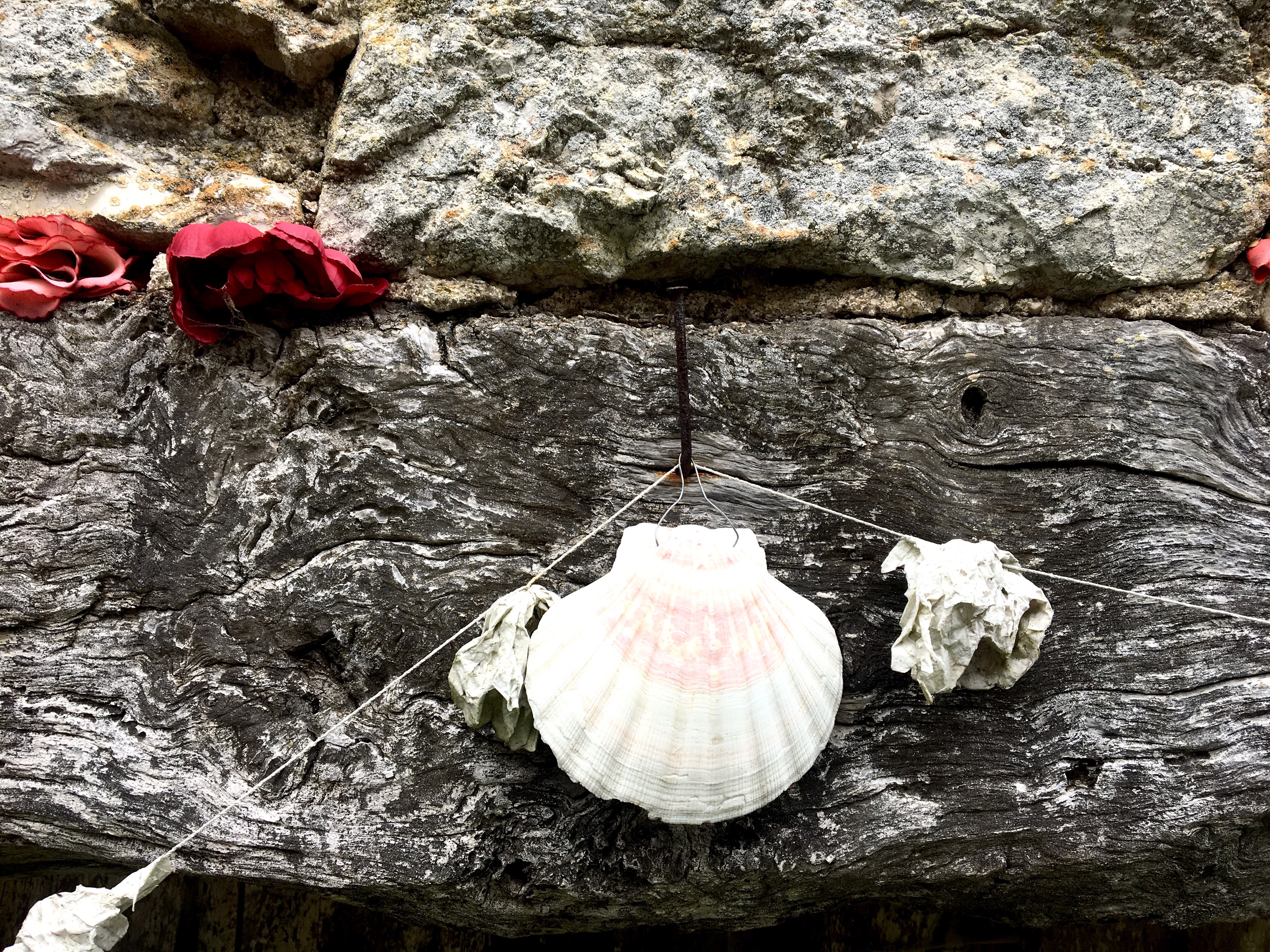 There was also a lot of peace, and quiet, and sometimes- for me- a feeling of isolation. This came and went, and never while I walked; only in the evenings and especially if I was among a large group of French people who were all traveling together. My French, even if it had been improving, is only passable. If one person was speaking to me, slowly, I could pretty much understand. If a group of people were all talking at once then forget it: and this was common at dinner time. So there were a lot of nights where I sat at the end of the table, smiling, trying as hard as I could to keep up but not being able to understand, not being able to contribute to the conversation. I’d take another sip of wine and laugh along with everyone else but actually have no idea what was happening.

But this wasn’t the case every night and by the end, I got to know the people I was with and so even when I couldn’t quite understand the conversations, it didn’t seem to matter as much. I was no longer uncomfortable sitting in the middle of all that French: now I felt a bit like I belonged. Maybe a lot like I belonged. 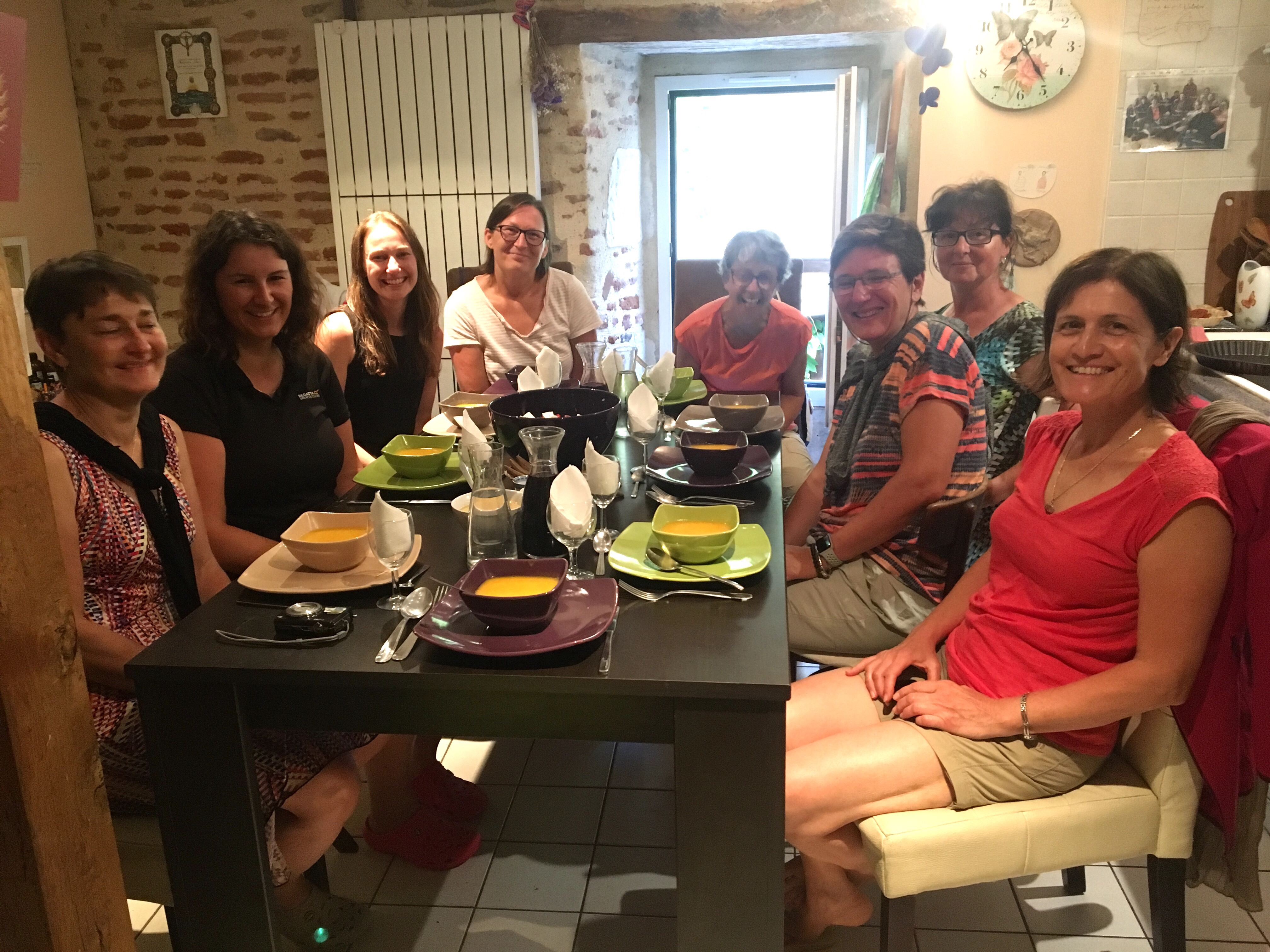 So. Now I’m in a tiny village that hangs off the side of a small mountain and I’m in the midst of a different group of people. There are, currently, 9 of us here at the writer’s retreat (it’s actually a writer’s AND artist’s retreat but this particular group is all here to write). Four of them I already know- we were here together last summer- and four are new to me. All women and one man. Homer (the dog) is still here and I hope to go on lots of hikes with him. I’ve already been on one hike: up to the waterfall and around to the viewpoint that looks down upon the ruins of Cathar castles and further out to the Pyrenees. The hike felt good. Not effortless, but also not too difficult. I like that after my weeks of walking through France and I can setttle in here and still hike to my heart’s content. 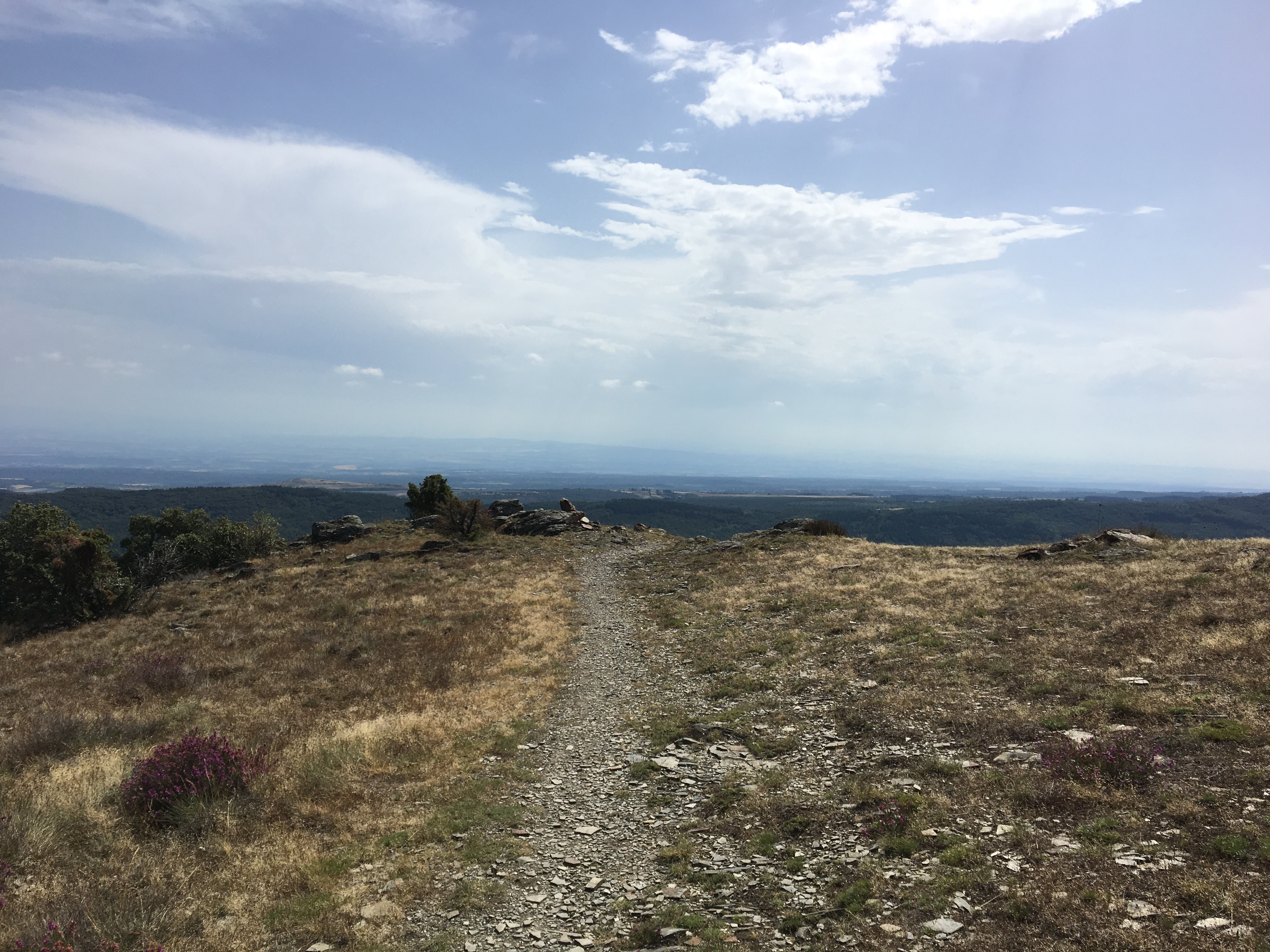 But I’ve also got to write and that’s going to feel a lot easier once I get my new keyboard. I haven’t said nearly everything I want to say but for how frustrating it’s been to type out these words, for how long it’s taken, for how much I want to throw this keyboard out my window, I need to hit publish on this post and then go old school, and start writing by hand in my notebooks. 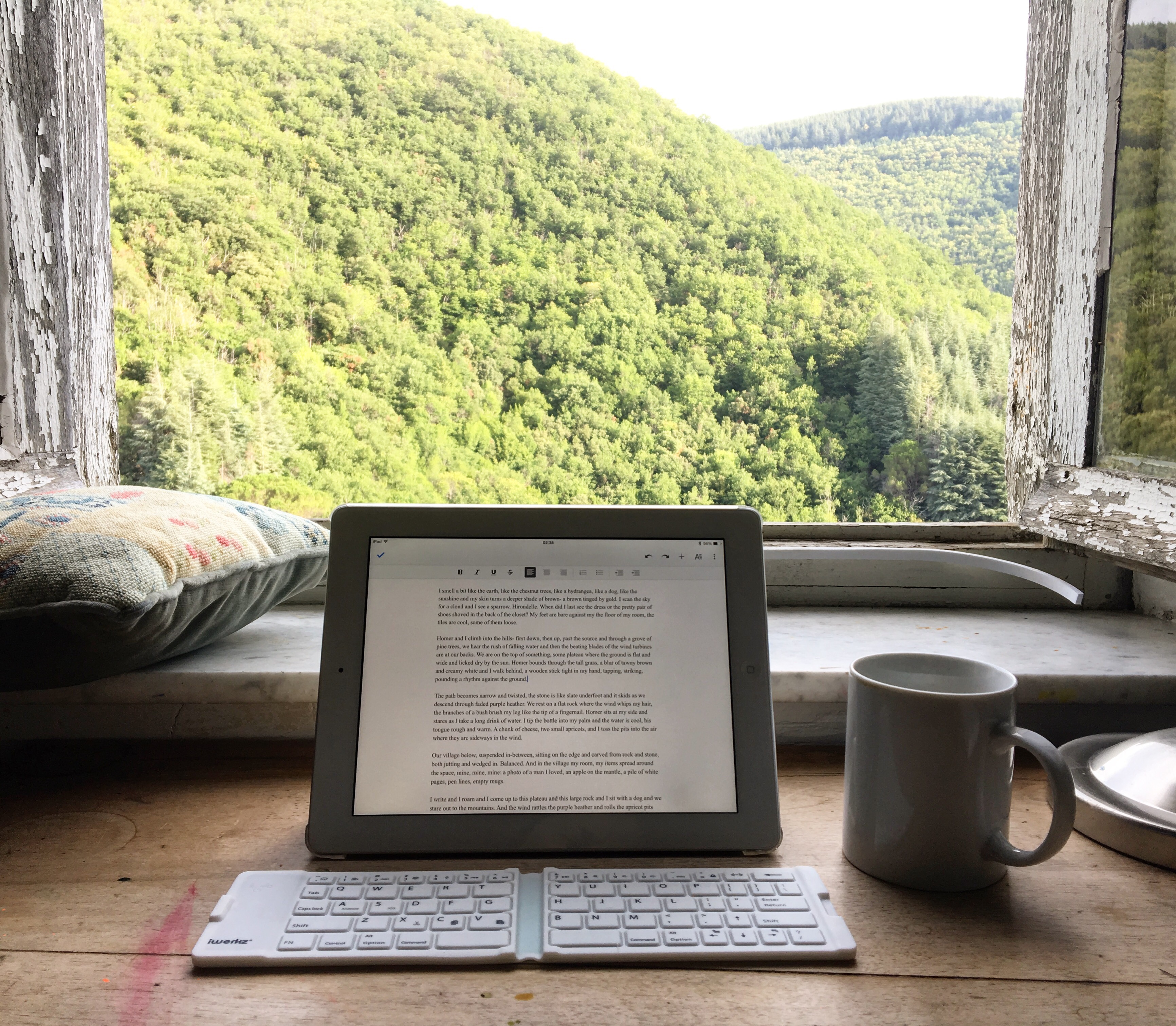 And maybe, actually, that’s just what I need for now. The French had this word that I heard a lot while waking: ‘doucement’. Slowly. Gently. Quietly. Carefully. ‘Il faut aller doucement’. You have to go slowly. 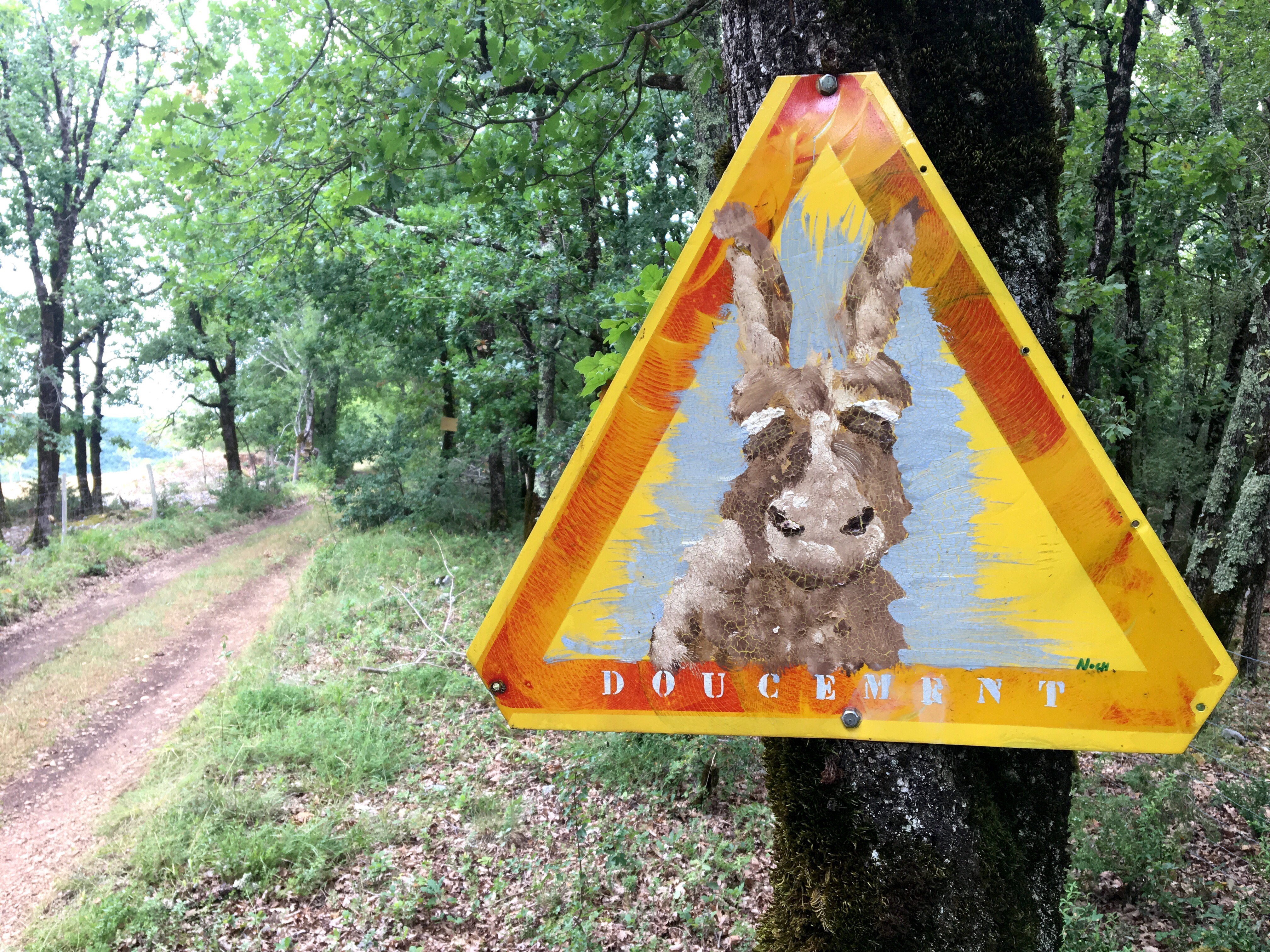