I wrote about half of this four days ago, and am just now getting around to finishing and publishing. So these posts are going to be delayed and maybe not quite in real time, but I still hope to write as much as I can!

It’s nearly 10:00pm and I’m just now attempting a blog post; I don’t think much is going to get written tonight. Hilary (that’s my cousin, who’s walking the first 3 days of the Chemin Le Puy with me) and I didn’t do a super long day- just 25km- but it was the first day and it was oh so hot and maybe there was still some jet lag and last night I couldn’t sleep so all of this adds up to a lot of fatigue.

I meant to get a blog post written this afternoon but, as you can probably guess, that didn’t even come close to happening. Because what happened instead was the Camino. 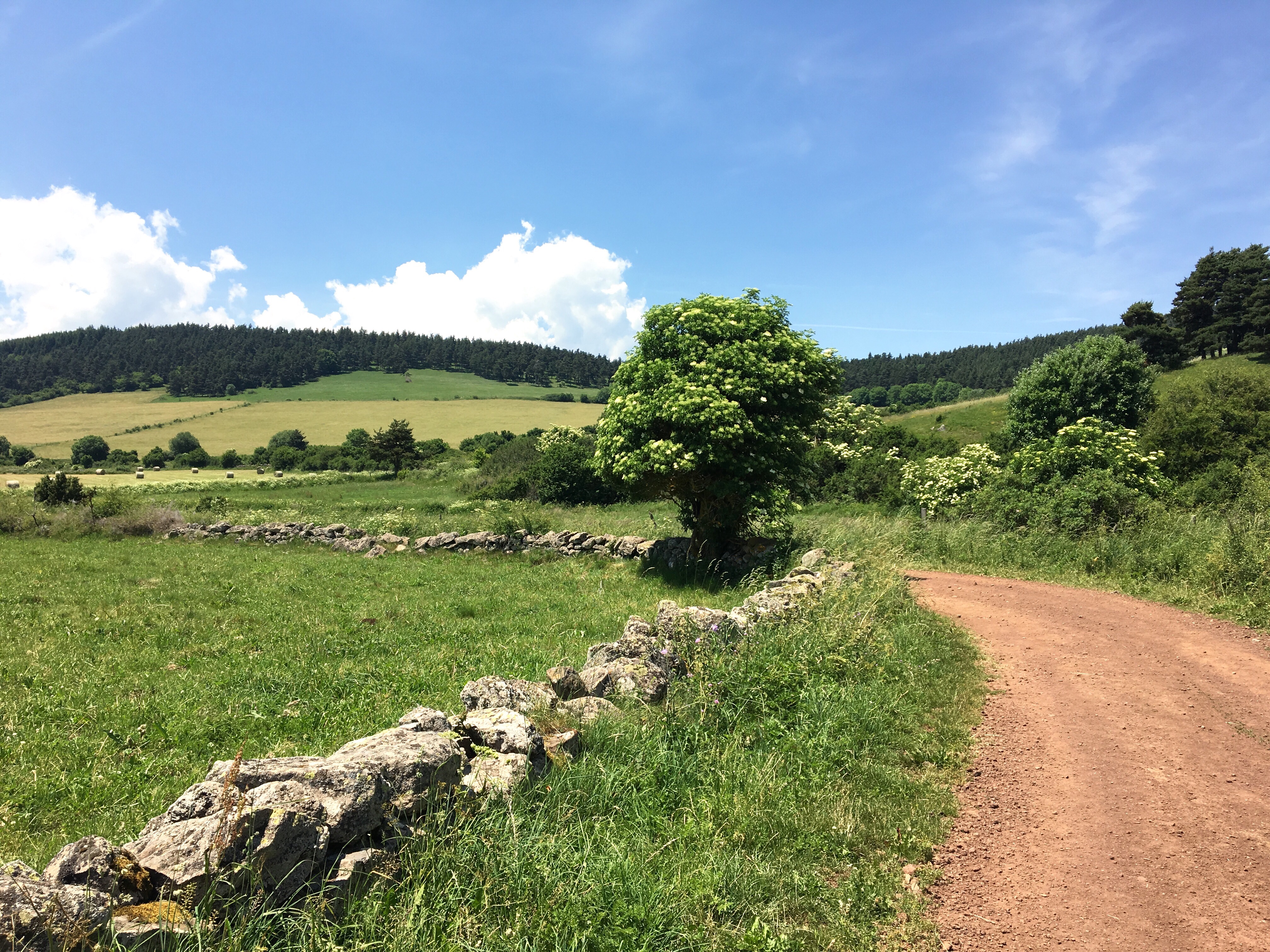 Can we even call it a Camino? We’re in France, so the ‘way’ is ‘Le Chemin’ and not ‘Le Camino’ but to me, I can’t call this anything other than a Camino. (So I wrote that a few days ago and already I’m getting used to saying ‘Le Chemin’- how quickly we adapt!).

So this is the recap, for anyone who may not have caught up with my previous post: I’m in France (got here on Sunday morning), and I started walking the Chemin Le Puy today (Tuesday). Hilary is with me until Friday morning and then I’ll continue on for another week and a half.

There’s a lot I could talk about from the past few days, just the whole process of getting down to Le Puy en Velay and being back in France, in Europe. It feels really great to be here, almost like I never left (which is maybe what starts to happen when you travel to the same places a lot?). We spent a night in Paris, staying in my favorite hostel, the MIJE. I was showing Hilary around all my favorites spots and I had to really smile at how I knew my way around the streets: this is where I buy groceries, this is a good cafe, that’s the best boulangerie. I can only do this in one small corner of Paris but to be able to do it at all? It felt pretty special. 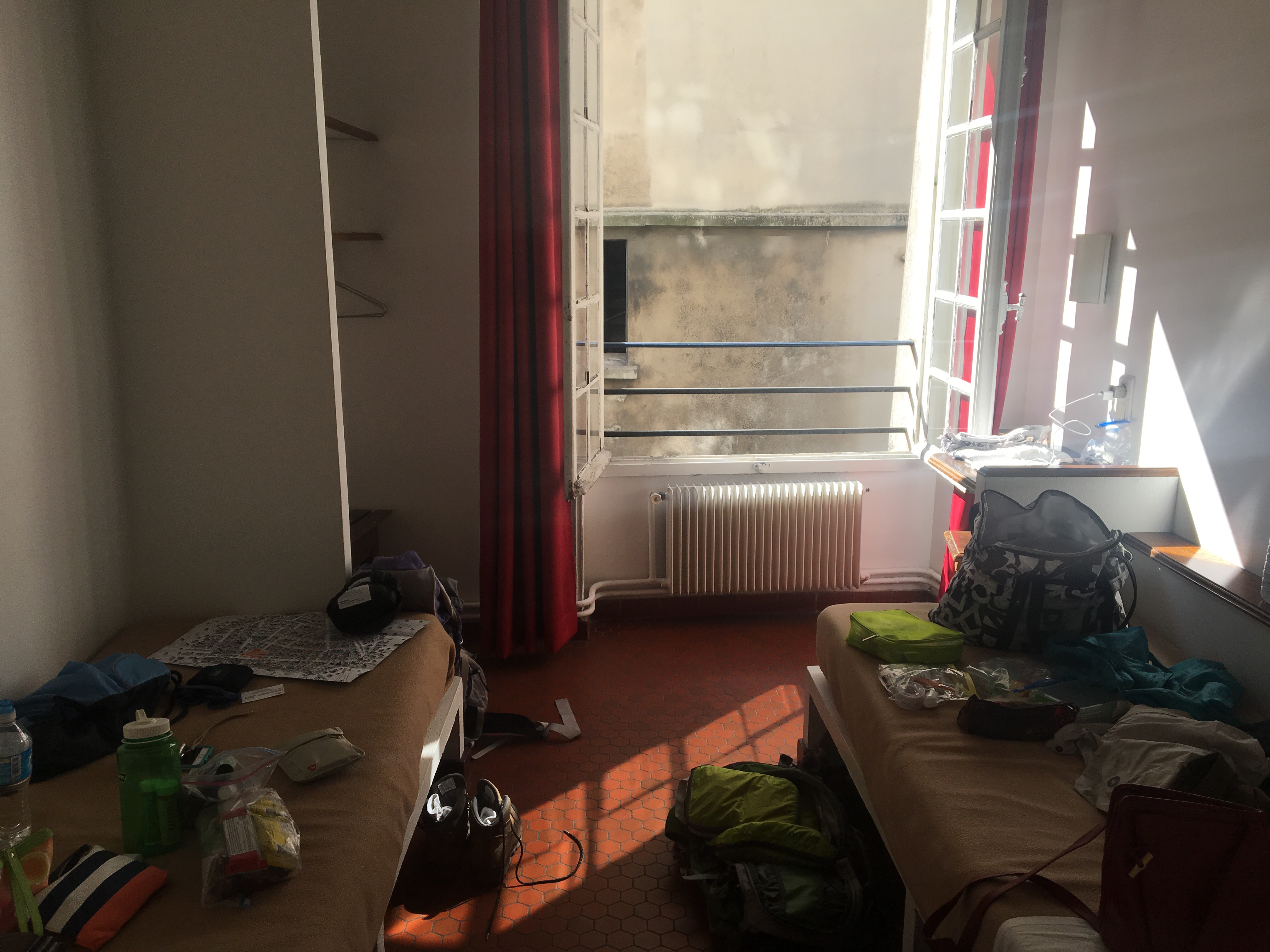 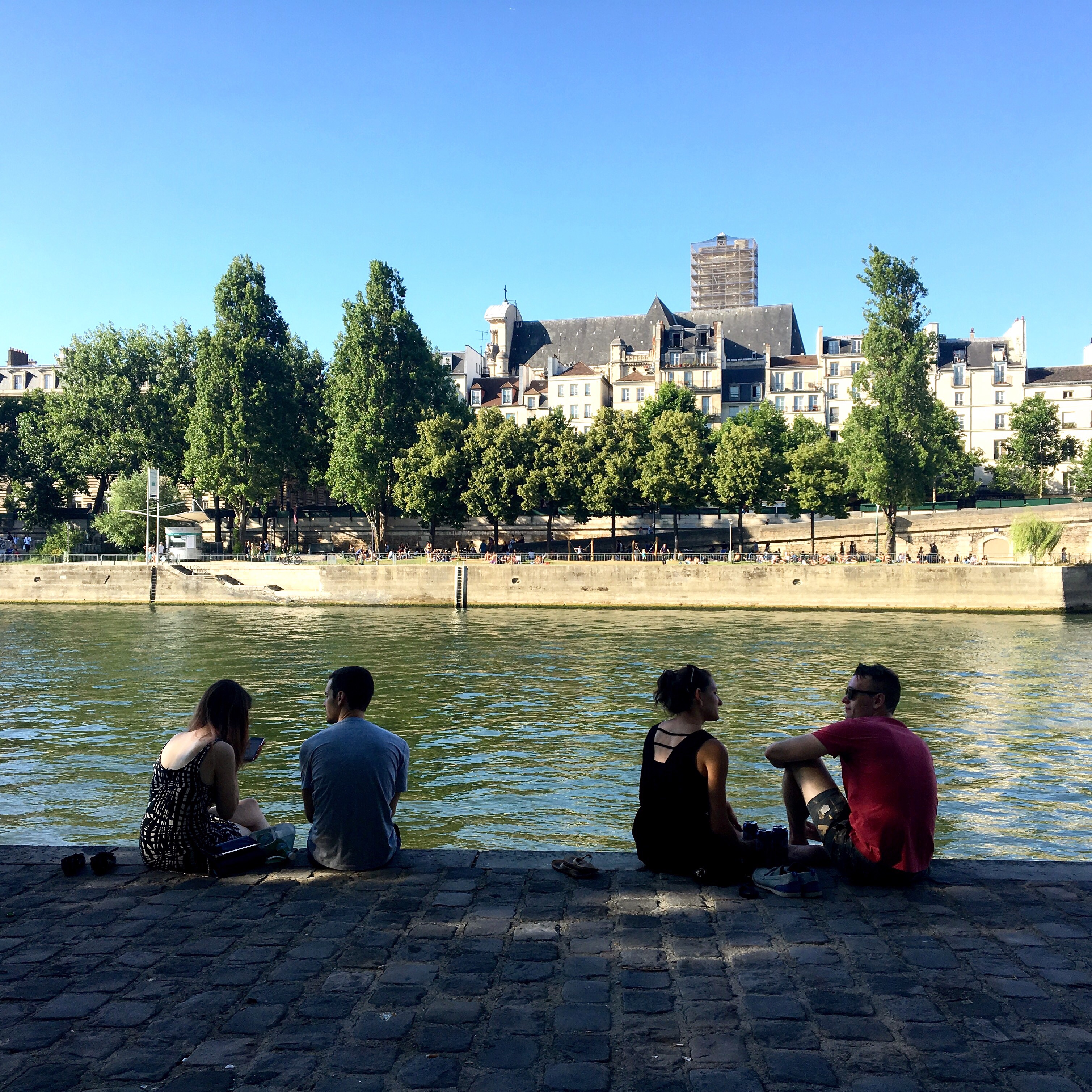 There were some initial bumps, the small bits of culture shock that still happen. How do I set up a SIM card? Why is my phone ringing? How do I answer in French? Why does my pack feel so heavy? (this is a question that gets asked every single year).

But after settling in a bit, strolling though Paris and eating ice cream in the shade along the Seine, and getting good and solid sleep, I felt more ready to tackle this French adventure.

We took a train, then another train, then a bus and finally arrived in Le Puy en Velay. I figured out what to do with my extra luggage, I confirmed a shuttle reservation for Hilary. We walked through the town, up the winding, cobblestones streets, and into the cathedral where we bought our credentials. The cathedral is amazing, it sits at nearly the top of the town and you have to walk up dozens and dozens of stairs in order to enter through the arched portal. But it’s really when you turn back and look out onto the town you’ve walked up from that you can feel how majestic the position really is. You almost feel on top of the world. 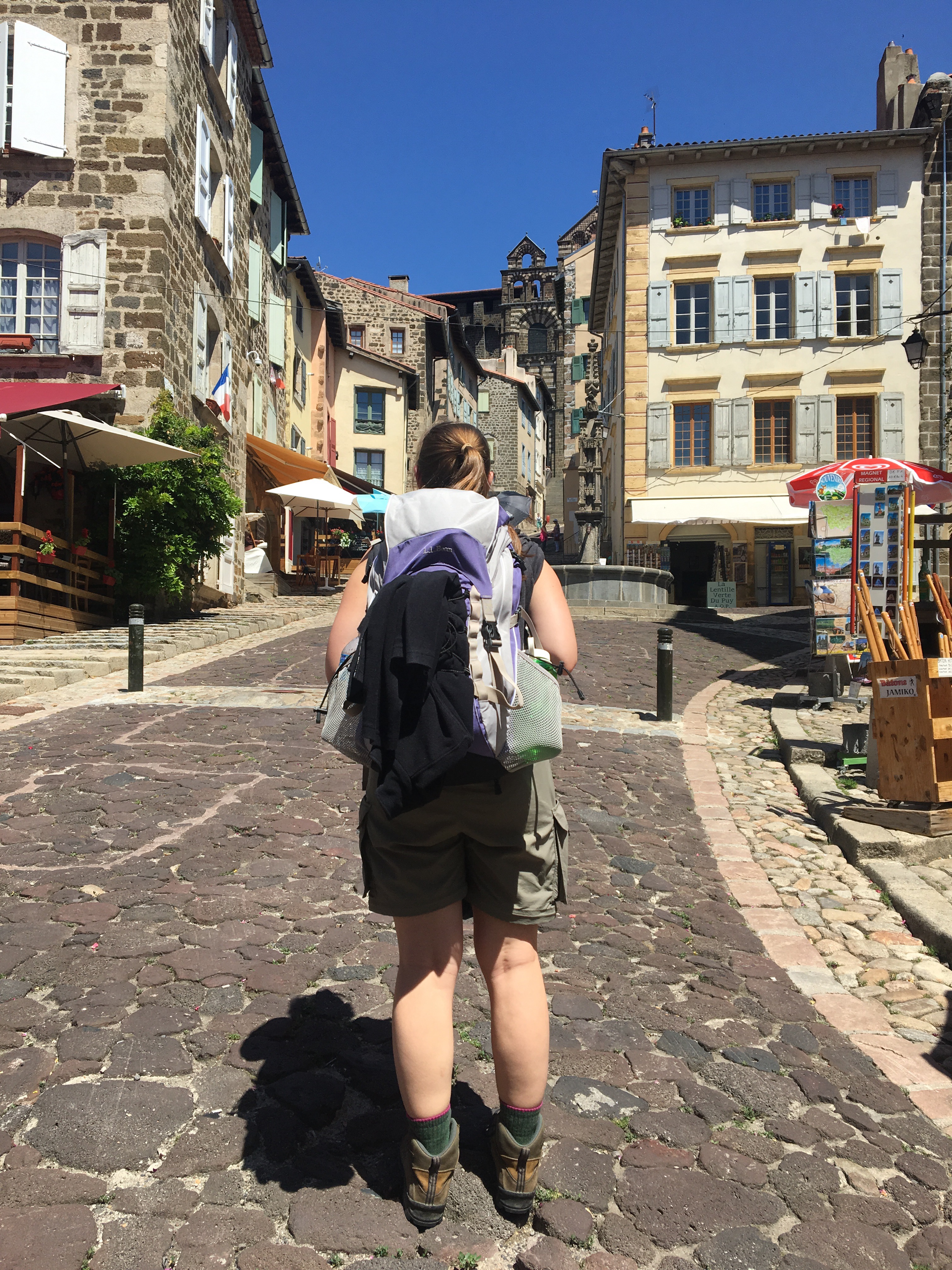 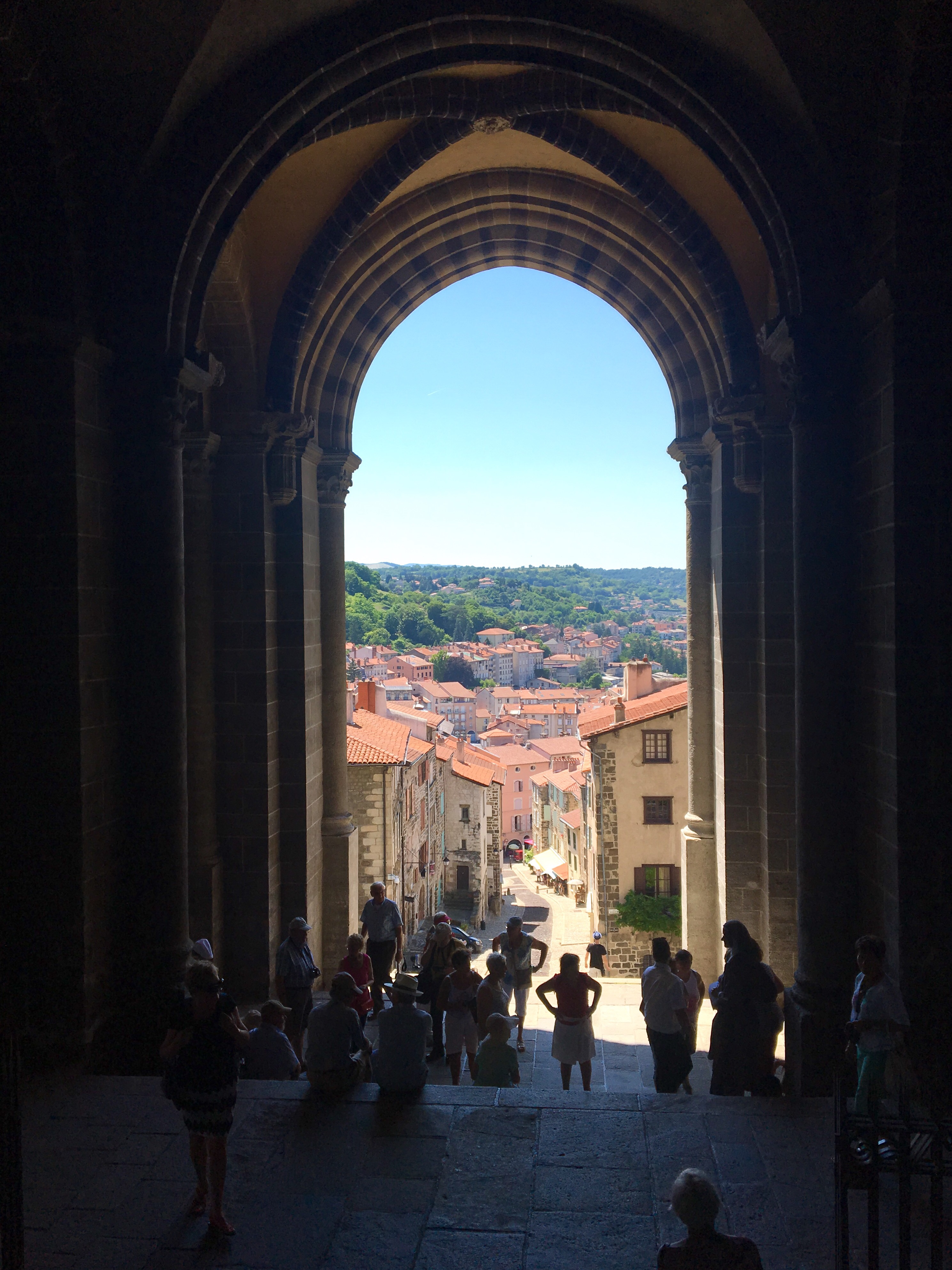 We ate a communal dinner with other pilgrims (nearly all conversation was in French, something I’m going to have to get used to), then headed back to the cathedral to watch a light show. This meant we were up well past a pilgrim bedtime, not getting into bed until nearly midnight. 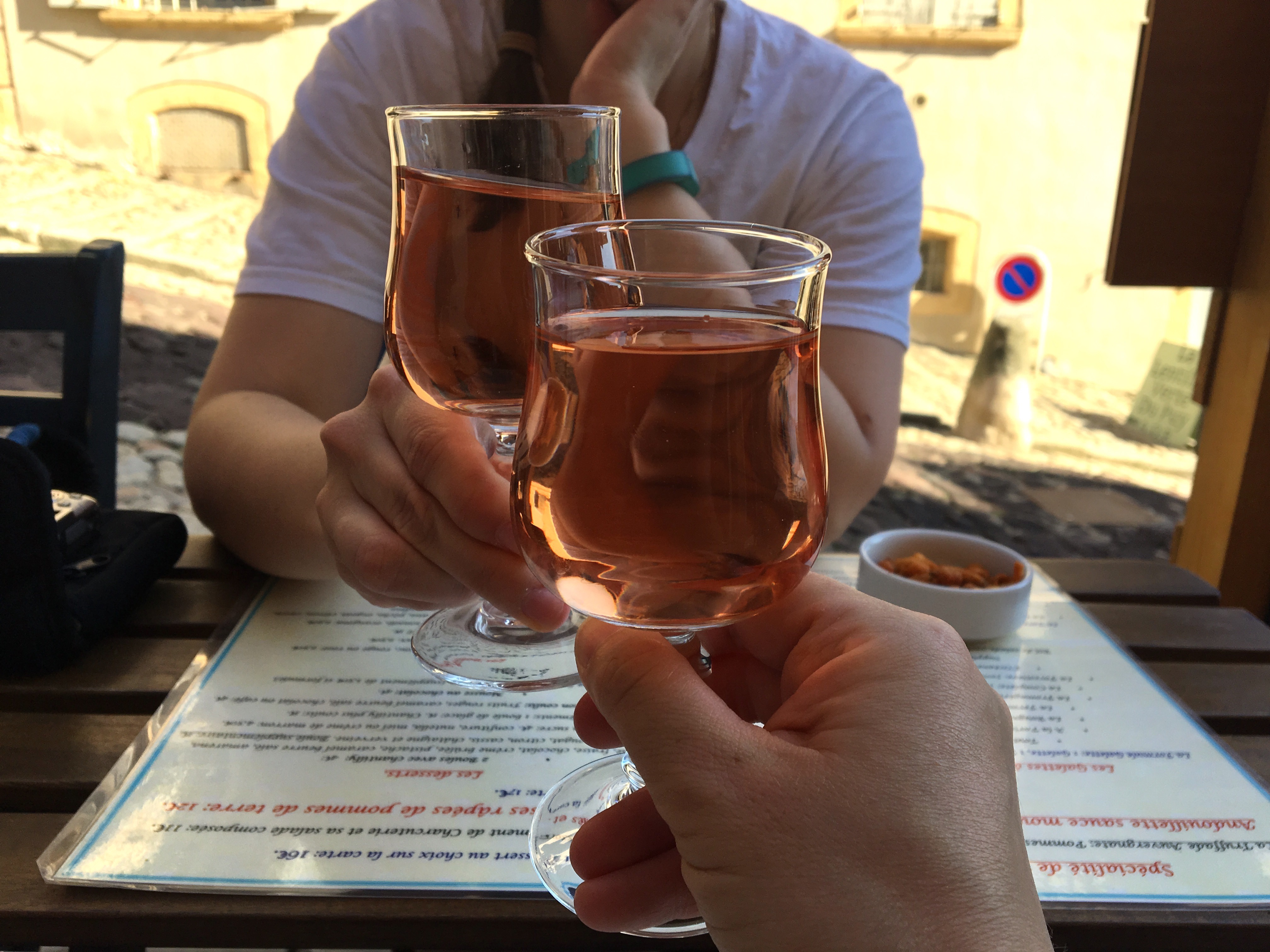 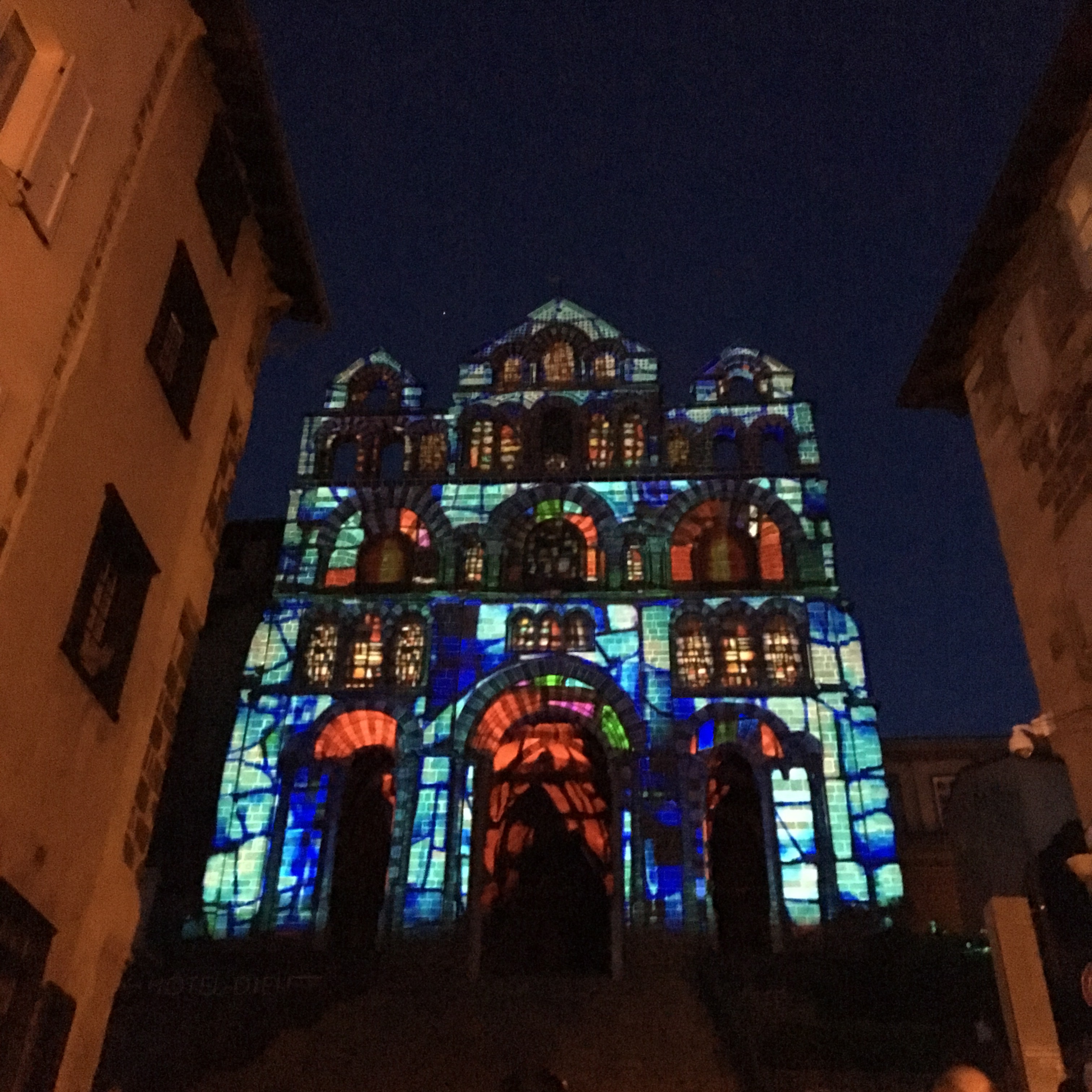 But despite the lack of sleep, today was a solid first day. Full. Tough. Hot. Beautiful. At times hilarious. We attended a 7am mass in the cathedral which was followed by a benediction for all the pilgrims starting that day and wow, it was quite a group. It was a special way to start a pilgrimage: we were all given a small medallion and a prayer, rosary beads if we wanted them, and many well wishes and ‘Bon Chemins’. 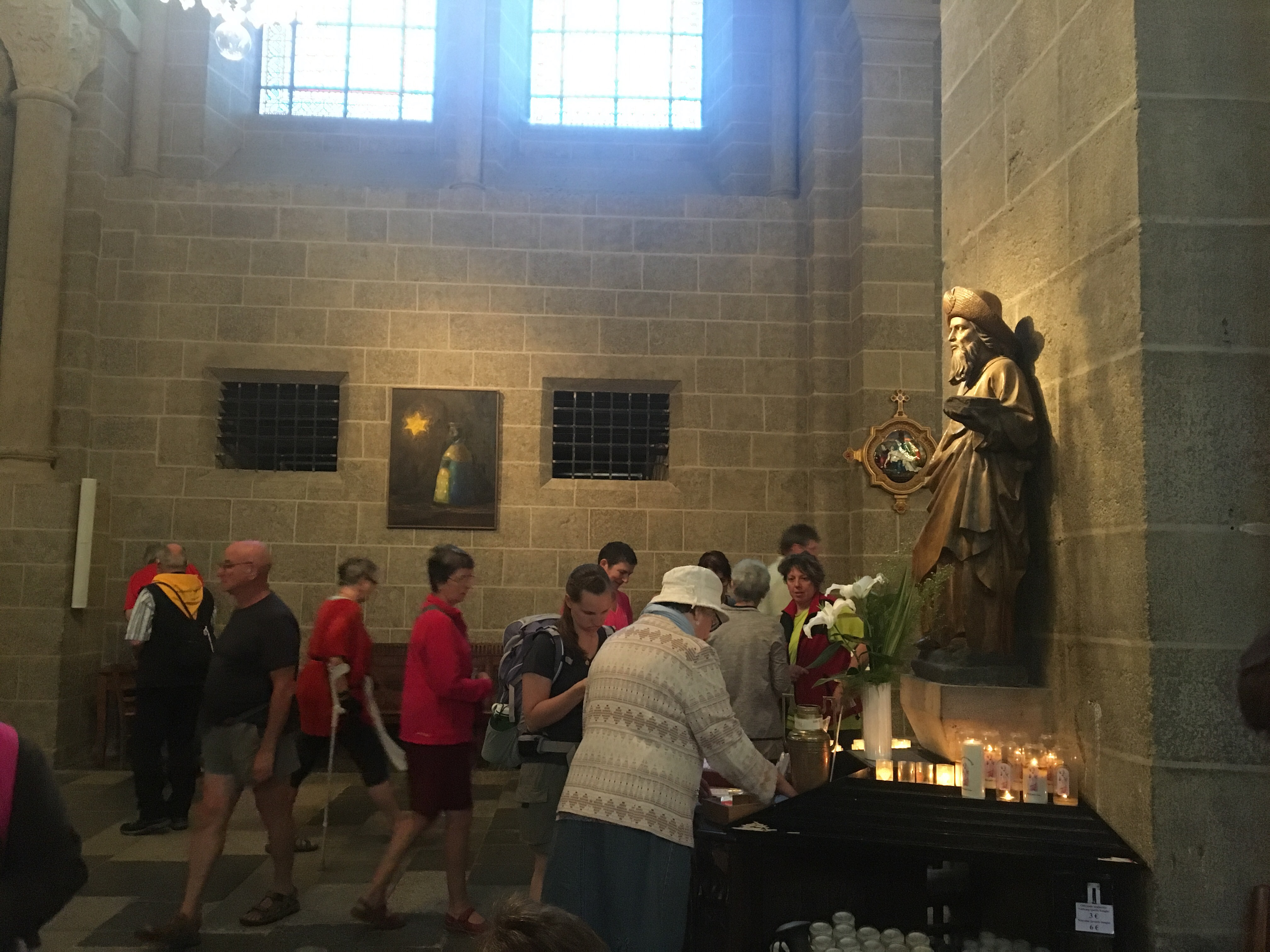 At first I struggled to remember what it was like to be on a pilgrimage. Hilary and I made our way down the steep street and at the bottom, paused. What, exactly, were we looking for? Oh yeah, didn’t we see a scallop shell on the pavement the day before? So we were off, following the shells, heading west, heading straight up a hill. We were breathing heavily in no time and my pack felt heavy but this is how a Camino begins. This is how it always begins. 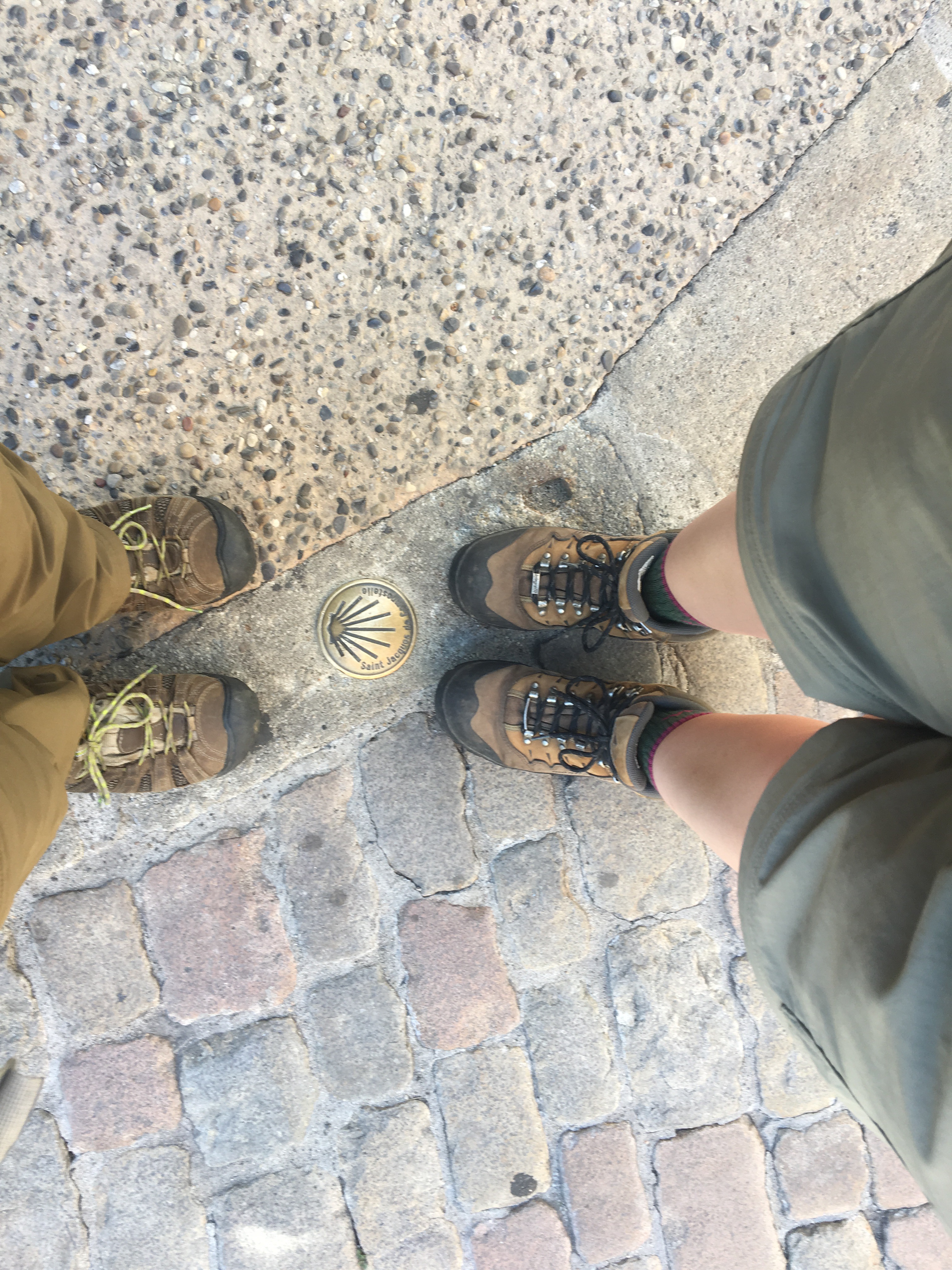 9am and suddenly it was very, very hot. And only going to get hotter: we started our Camino in a heat wave. But despite the heat it was a really beautiful first day, and quickly signs of the Camino returned: winding dirt roads. Small chapels. Pilgrim rest stops on the side of the trail. 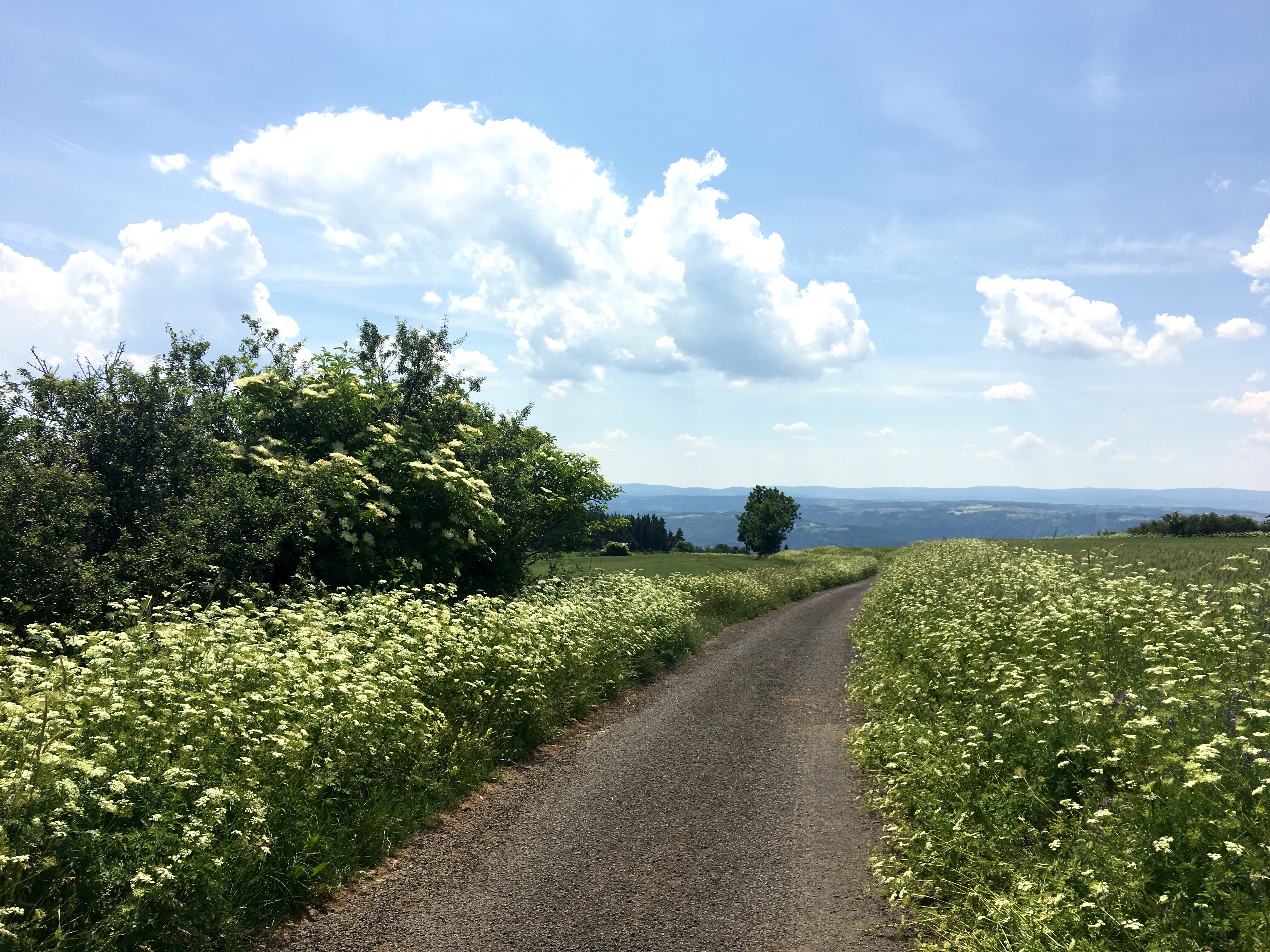 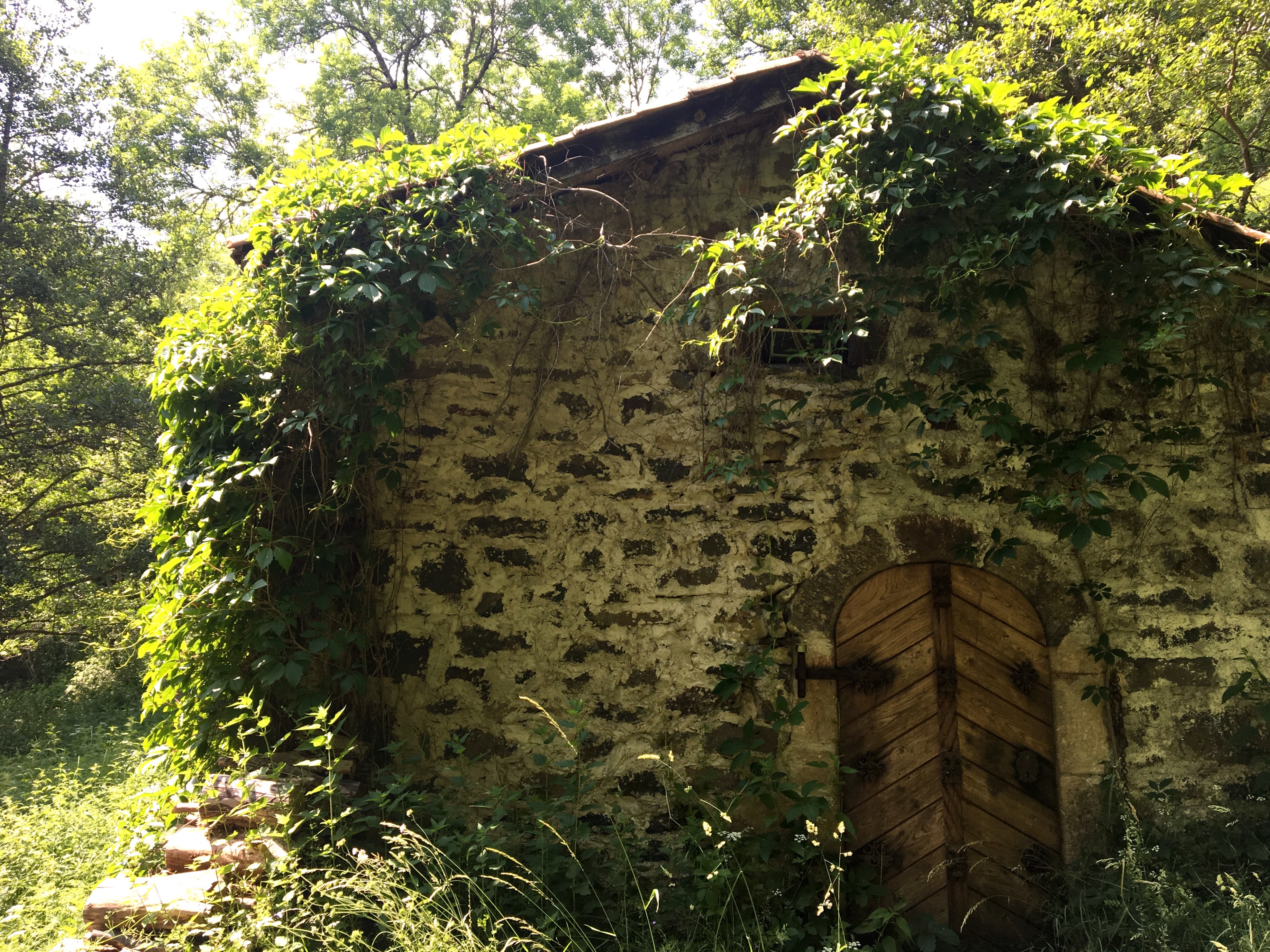 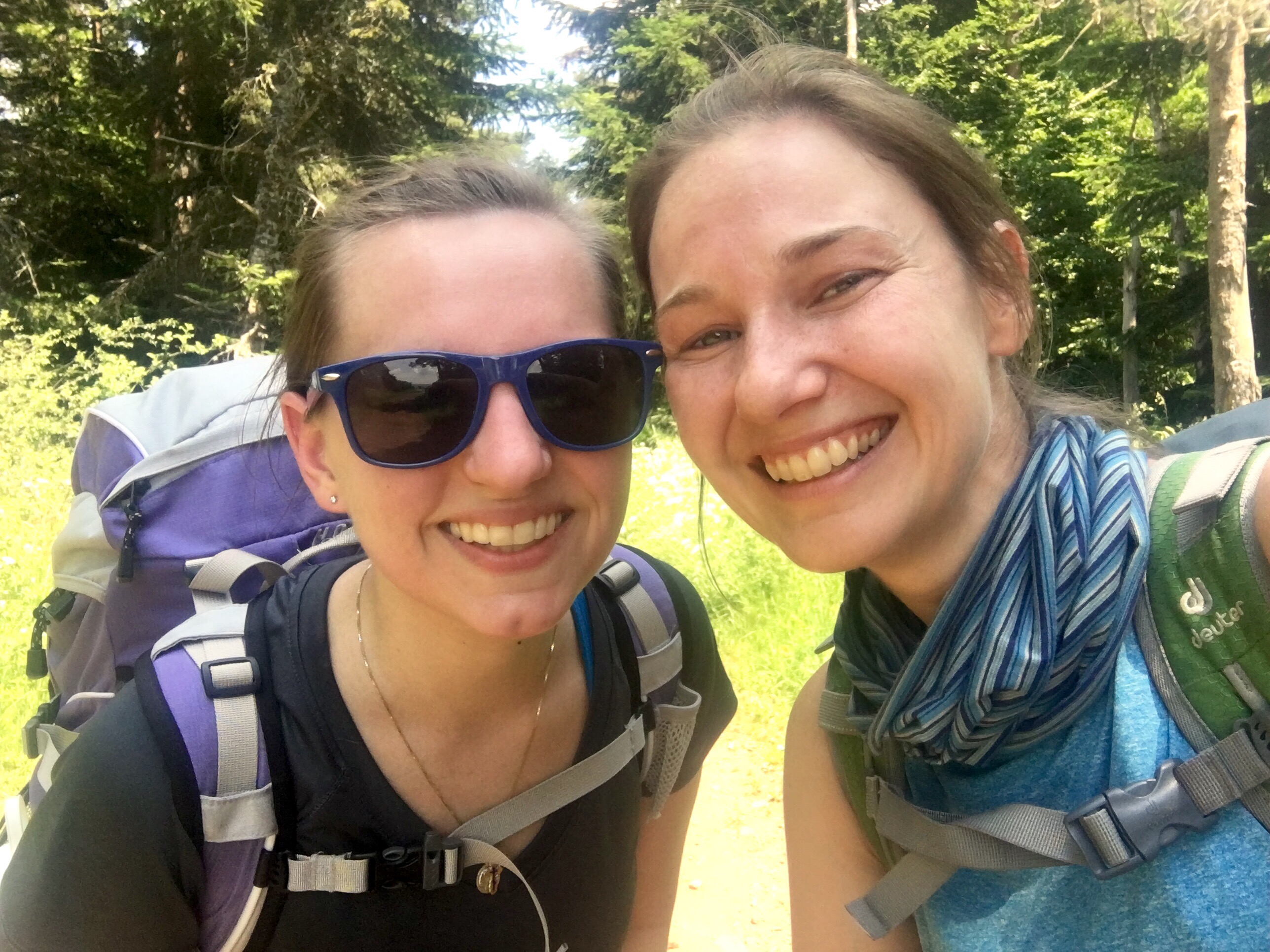 Most people end the first day in Saint-Privat but I’d chosen a gîte in Combriaux, a hamlet just another kilometer or two further along the trail. We made the wise decision to stop in Saint-Privat for an ice cream, and then continued on for a short section that our guidebook promised would be easy, and yet was deceptively difficult (but maybe that’s just ‘end of the first day on the Camino’ type stuff? Who knows, but a hill at the end of any day is never very welcome). 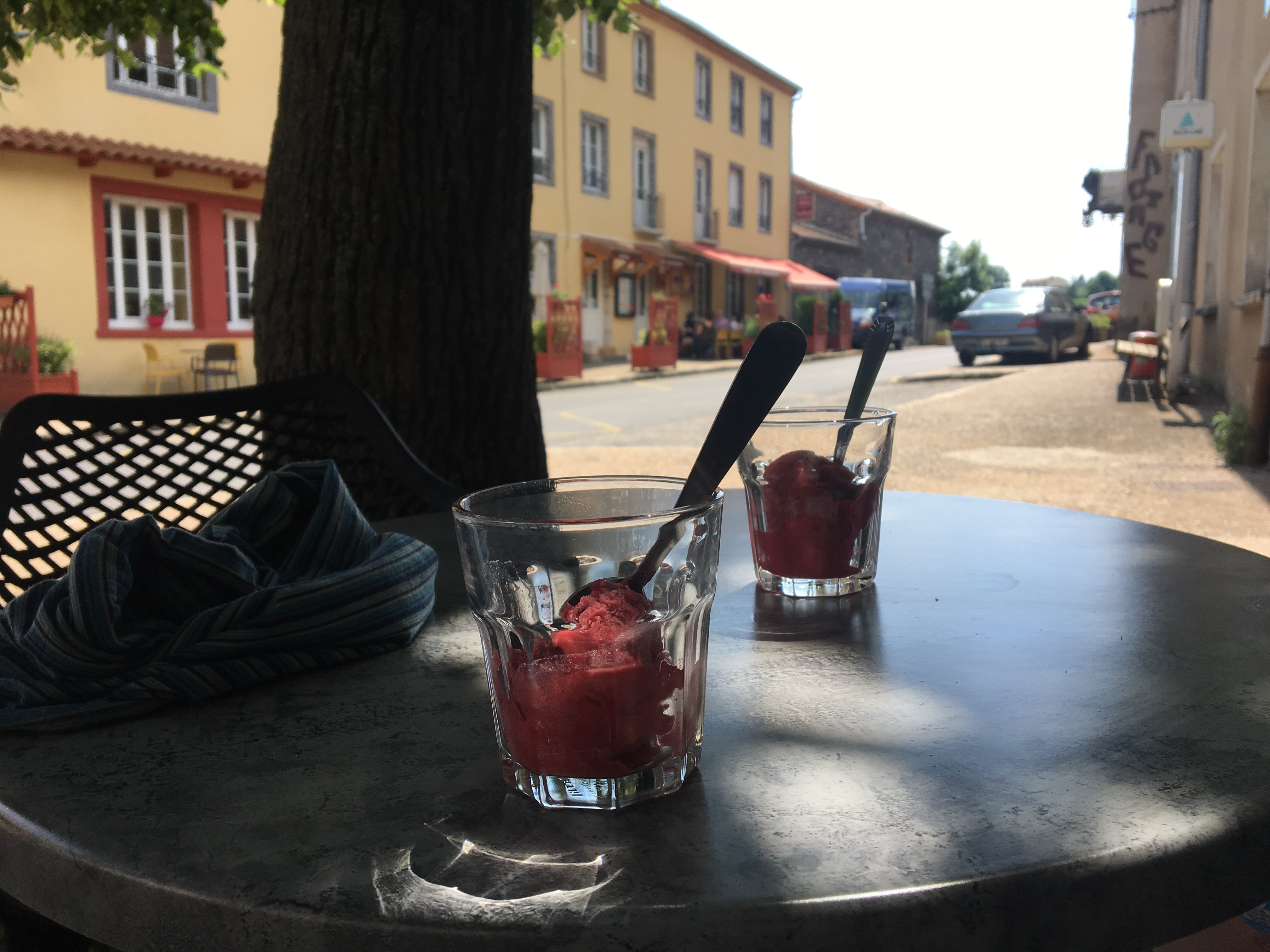 The gîte experience is a new one for me: gîtes are like albergues but are generally privately run, with smaller, shared rooms that hold 4-6 people (or so). Some gîtes are private homes, with a section of the house open to pilgrims. Nearly all gîtes offer a demi-pension, which provides a bed for the night, a communal dinner, and the typical breakfast of coffee, bread and jam before you leave for the day (I’m finding costs for demi-pensions to be between 30-35 euros; more expensive than Spain but overall a great bargain).

Our first gîte was quite an experience. We stayed in the home of a Welsh man and his wife (and daughter too, possibly?). Elfed offered us a drink then showed us upstairs to our room, which was basically up in an attic (all the rooms were up here, partitioned off with plywood and curtains). There were three beds in our room but Hilary and I had it to ourselves, in the space next to us was Mario (who, despite his name, was French), and at the end of the space were Marc and Veronique.

Just as we finished taking showers and washing our clothing a storm rolled through (this would be a theme of the first few days of the trip), so we were all ushered inside. Elfed kept the wine flowing and later served us a feast: vegetable soup, tomatoes and cheese and capers and olives (it sounds simple but oh, those French ingredients!), lentils de Le Puy (a regional classic) with pork, bread pudding and ice cream for dessert. There was bread, too (mais oui!). 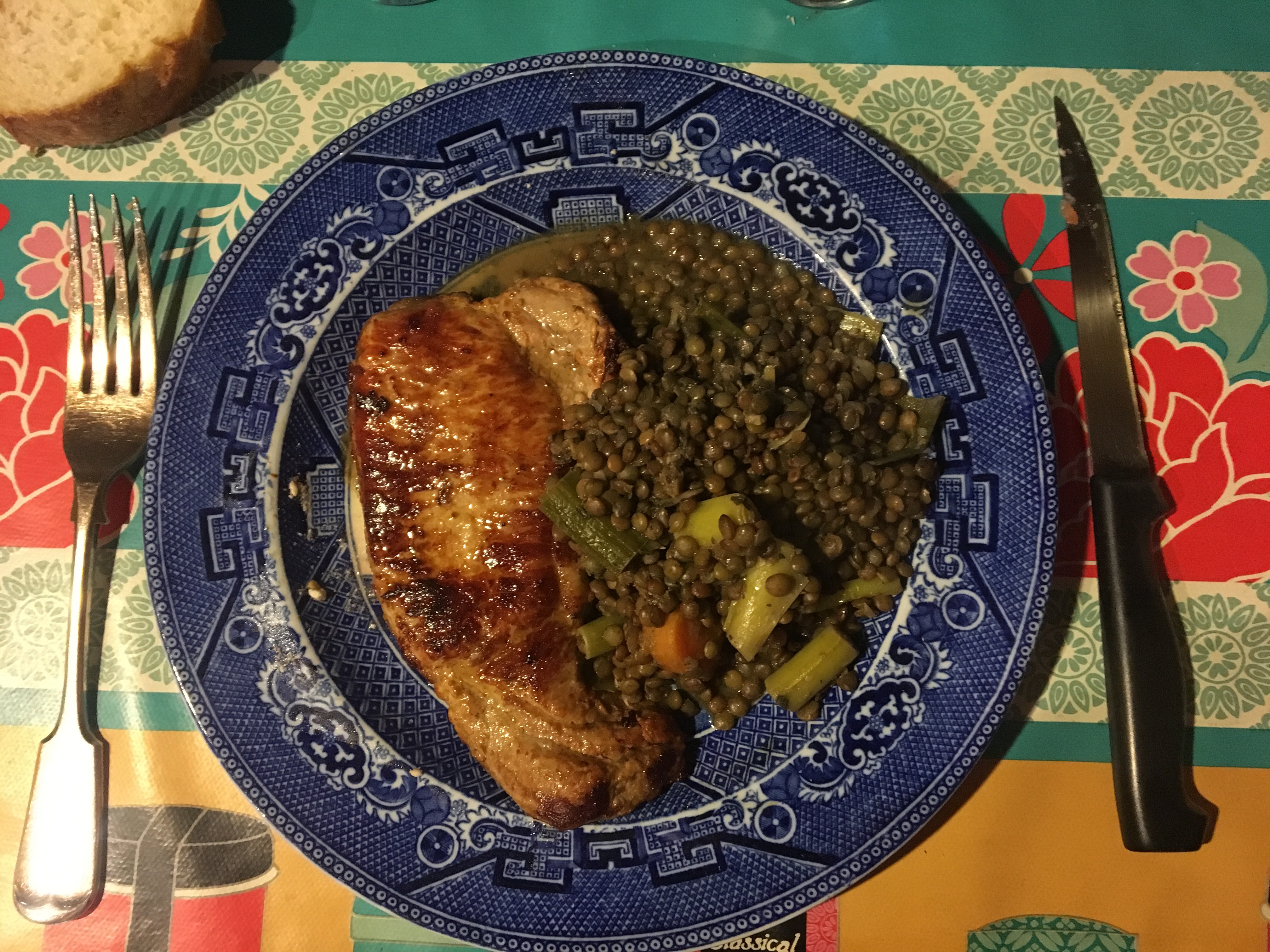 Mario spoke perfect English, and jumped back and forth between conversations with Hilary and I, and then with Marc and Veronique, and would translate and somehow kept the conversation going steadily. Just as dessert began there was an incident with a cat and a dead bird, but otherwise the meal was pretty perfect. It was a good first day on the Chemin.