It’s a cool and rainy day here in Philadelphia, the sort of day for organizing and baking a cake and writing a blog post. I want to get these last recaps of the Hadrian’s Wall trek out, because before I know it I’ll be headed off on my summer adventure! (Still a month to go, but I have a feeling that this time is going to go by in the blink of an eye).

So speaking of a rainy day, let’s talk about Day 4 on Hadrian’s Wall. When I woke up in the morning from my cozy bed at Slackhouse Organic Farm, I heard a pitter-patter on the window. Uh-oh.

I got dressed and shoved my things in my pack and then peered out the window for a closer look. The sky seemed to be spitting rain but it didn’t look too bad. Sort of like a mist. And a mist isn’t too bad to walk in, right? 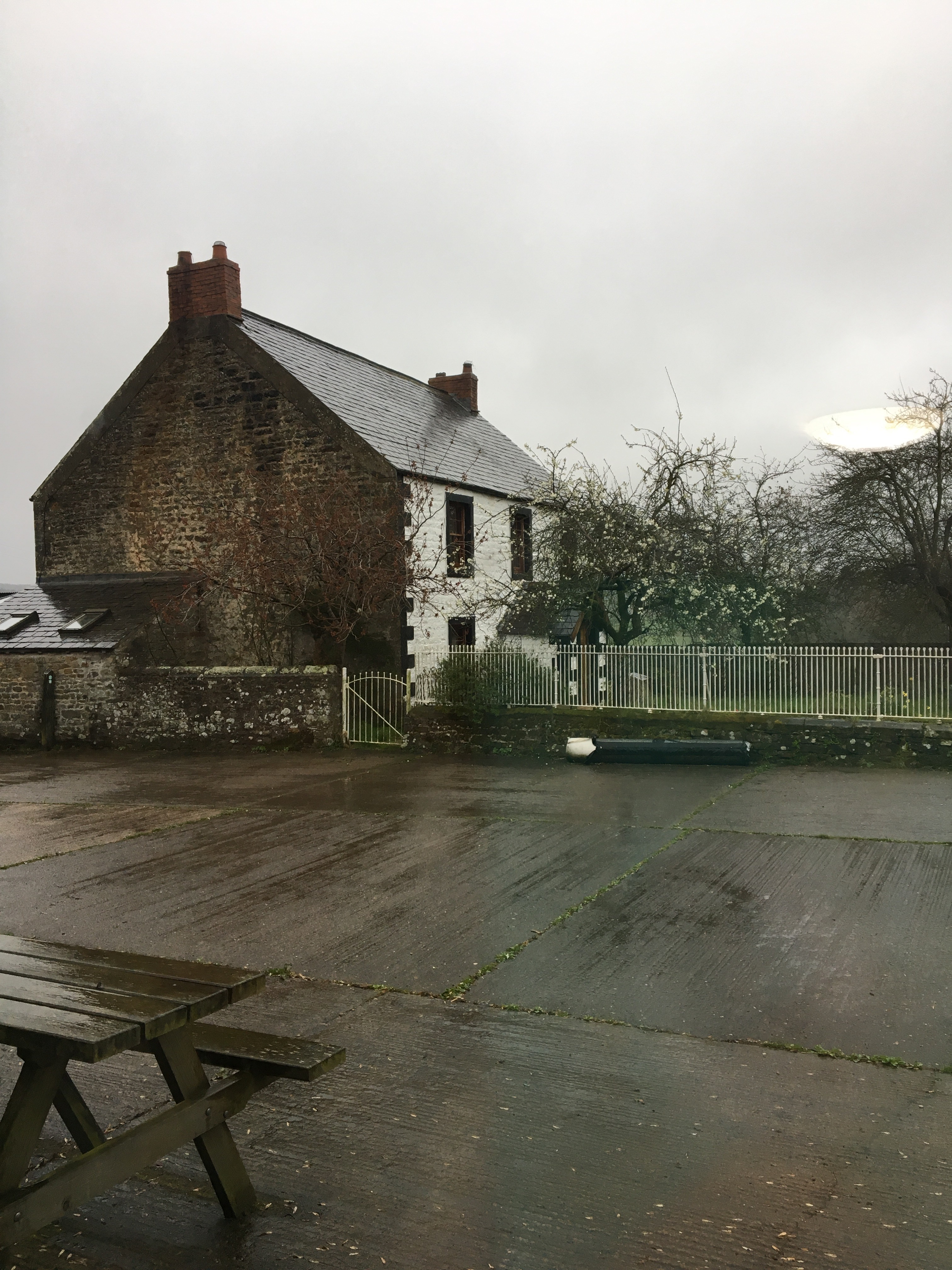 Heather and I headed to the lounge and kitchen area, where we settled into the breakfasts that we had ordered the night before: I had a large french press full of good strong coffee, and fried eggs over toast. In addition to this, I’d also ordered toast and jam. The toast was all I was going to eat initially- bread and butter and coffee being my preferred breakfast on any given day- but Diane, our hostess, talked me into something heartier and so I added some eggs. And the eggs were good but the warm loaf of bread that was wrapped in a tea towel and served with homemade marmalade? I must have eaten half the loaf. 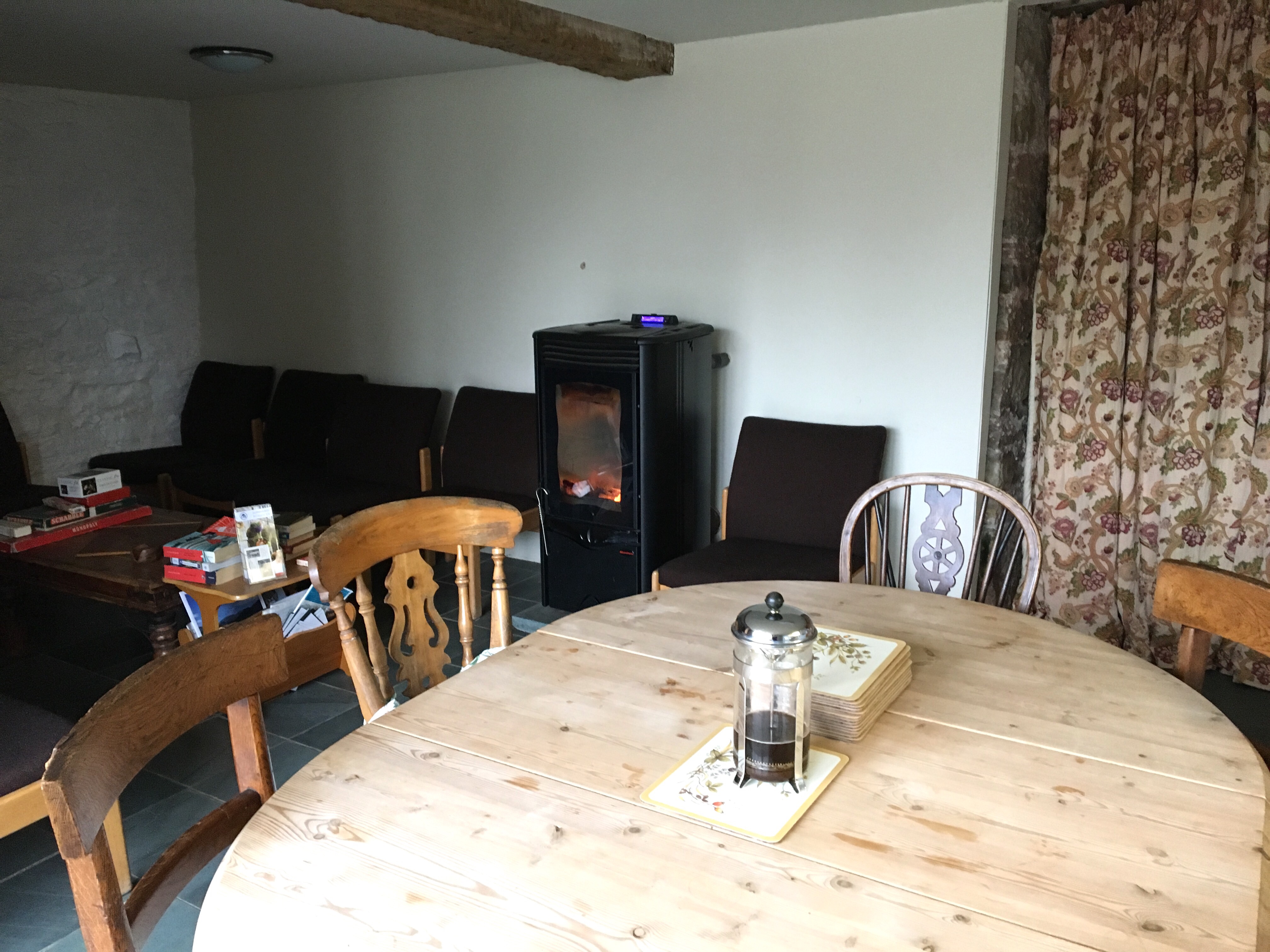 Diane gave us some advice about the weather, as she squinted into the gray morning. “Rain before 7, fine by 11.”

I liked how promising these words were, and so Heather and I suited up and headed out. Neither of us wore any of our rain gear because it seemed like the rain had mostly stopped, but what were we thinking? About five minutes into our walk I had to stop to put on my rain jacket, and a bit further on Heather did the same.

We separated once we got back to the route (Slackhouse Organic Farm was about a 10 minute walk off the path). I wanted to hunt for an inscription on a stone that was supposedly somewhere on the Wall close to Birdoswald (the remains of another fort), so Heather continued west while I backtracked a bit. I found myself wandering around an open field, staring at stones in the Wall hoping I would see something, while the rain started to come down harder.

I soon realized that it was like looking for a needle in a haystack, so I gave up and started walking. As I passed by Birdoswald- too early to be open- I considered finding a dry, tucked away spot under an awning to change into my rain pants. I hesitated, but then kept walking, convinced that the rain wasn’t actually that bad (once again- what was I thinking??).

But I didn’t really consider the effect of the wind. I suppose the rain was never really that bad, but the fact that the wind was blowing it straight into me as I walked meant that my clothes were becoming very wet. Most concerning were my pants. I’ve walked in a bit of rain on the Camino before, and my pants got wet, but because I walked in the summer it was never really a big deal. My legs would feel wet but once the rain stopped it was always warm enough that the pants would dry and it would all work out fine.

But I never thought about what wet legs might feel like in 40-something degree weather (which is what we started walking in that morning). Very quickly my legs got very cold. By this point I’d moved away from Birdoswald and was walking through fields and countryside, with a street running parallel to the track. There was no cover, no dry areas, nothing but grass and sheep for as far as the eye could see.

I continued to walk but as soon as I saw a cluster of trees tucked against a stone wall (not the wall, I don’t think), I ducked beneath it, took off my pack, and dug around. I couldn’t just put my rain pants on over my hiking pants because the hiking pants would still be wet and I’d still have cold legs. So I did the only thing I could think to do, after looking far down the road and assuring myself that there were no cars coming.

One foot and one leg at a time, I took off my shoes and then my pants and put on my long underwear layer and then my rain pants. This took some balance and there was a lot of hopping around a field in my underwear involved, but eventually I got myself redressed (oh what a show for all the sheep and lambs!). 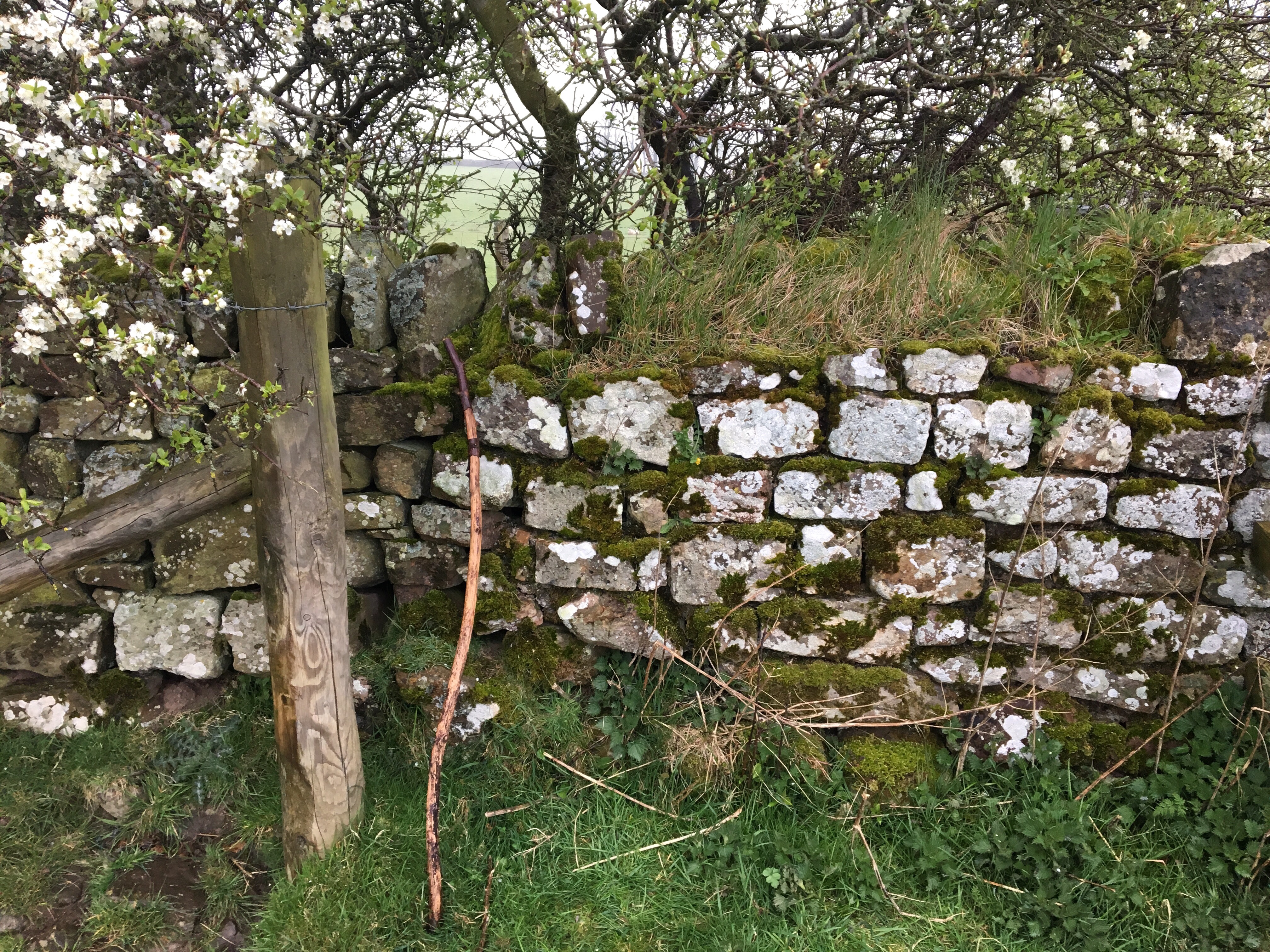 My changing room on Hadrian’s Wall

This was my first time using rain pants and I have to sing their praises. My layering system was perfect for walking in the rain in cool springtime temperatures. My legs were dry and warm and the rain pants continued to keep everything dry and warm. Between those and my rain jacket (with a buff over my forehead to keep wet hair out of my eyes), I actually felt really comfortable walking in the rain, which is the first time that’s ever happened.

I think I could have kept walking in the rain for a few hours without too much complaint, but after only about 30 minutes the rain stopped (of course). 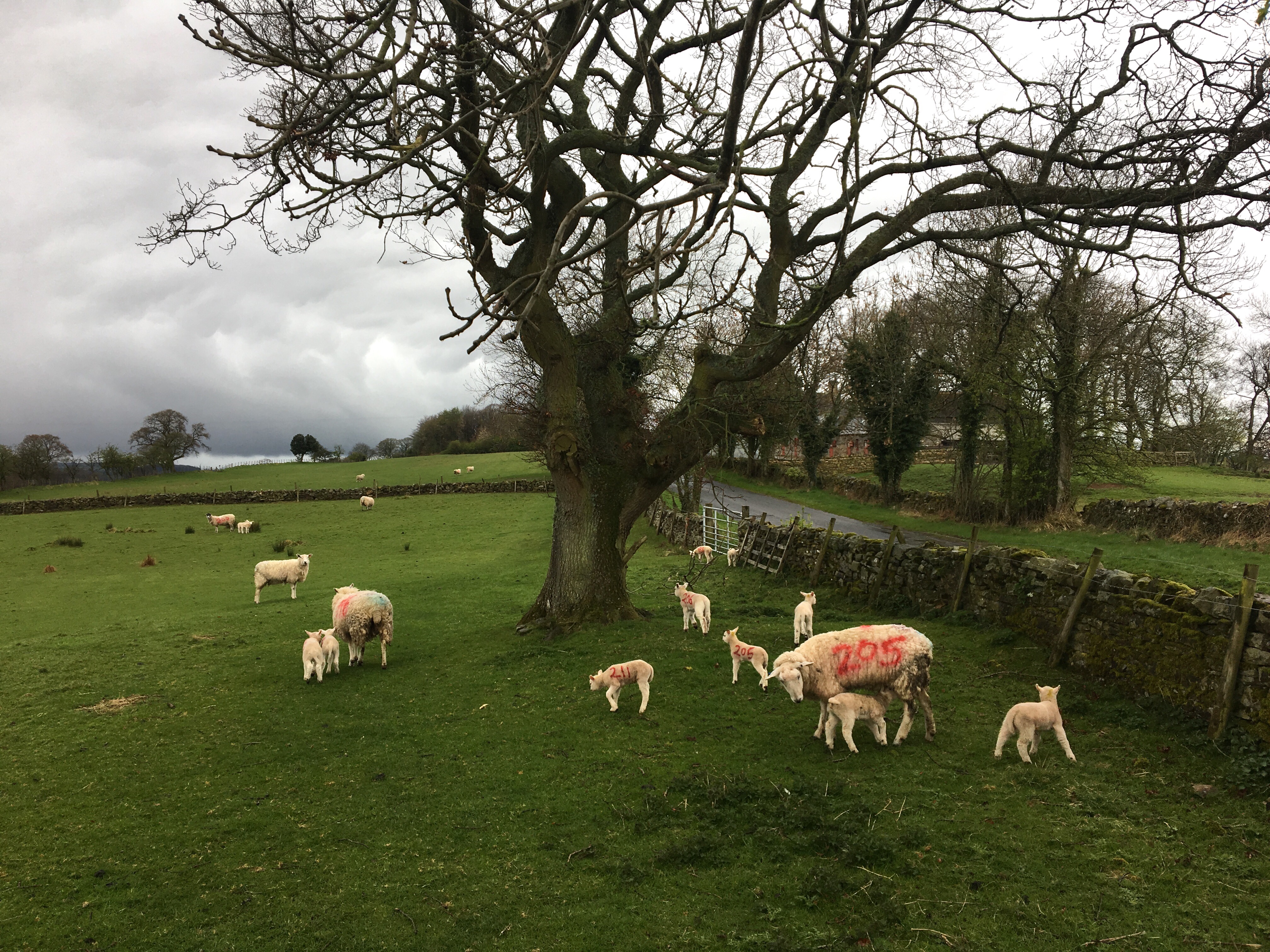 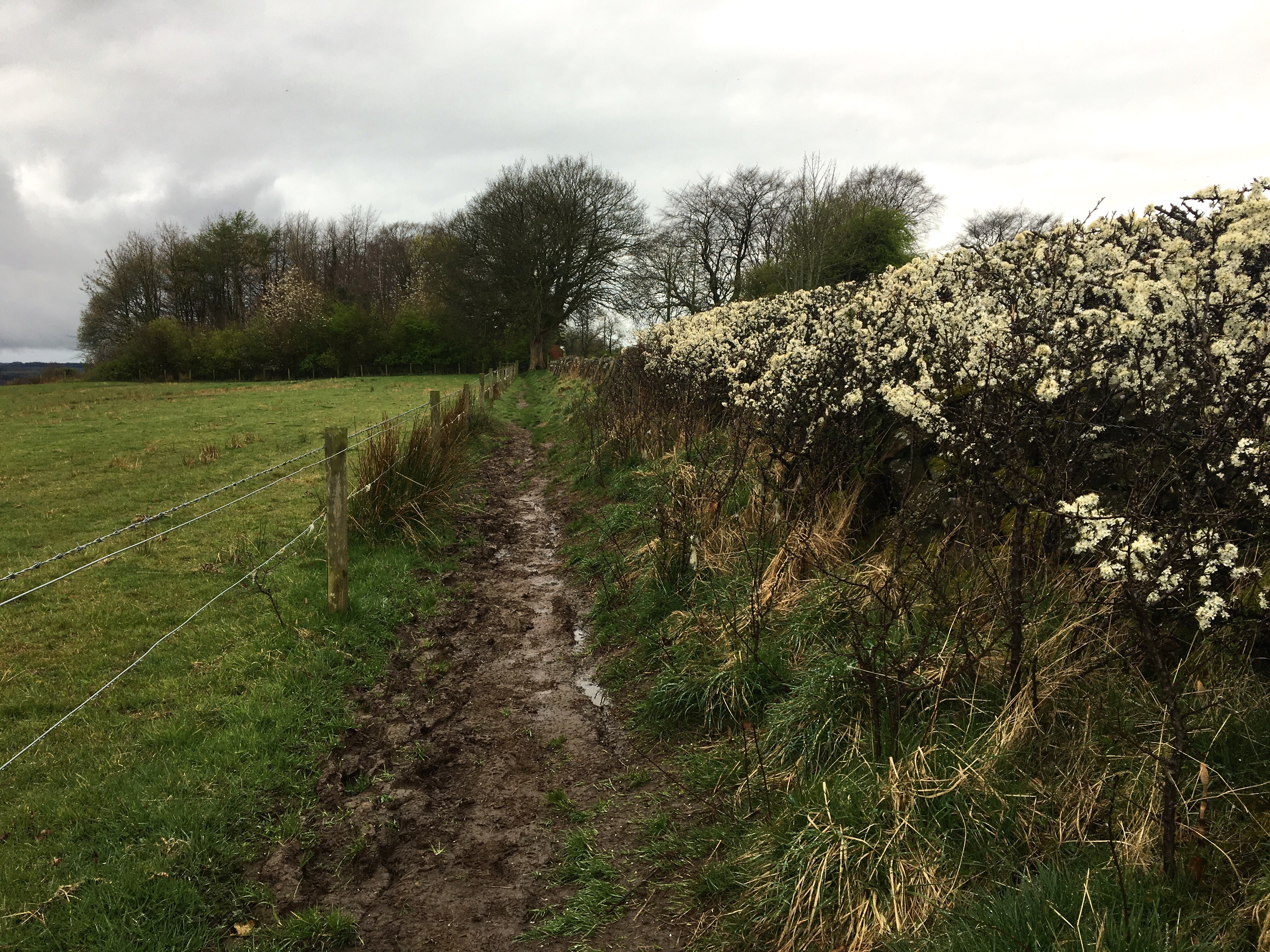 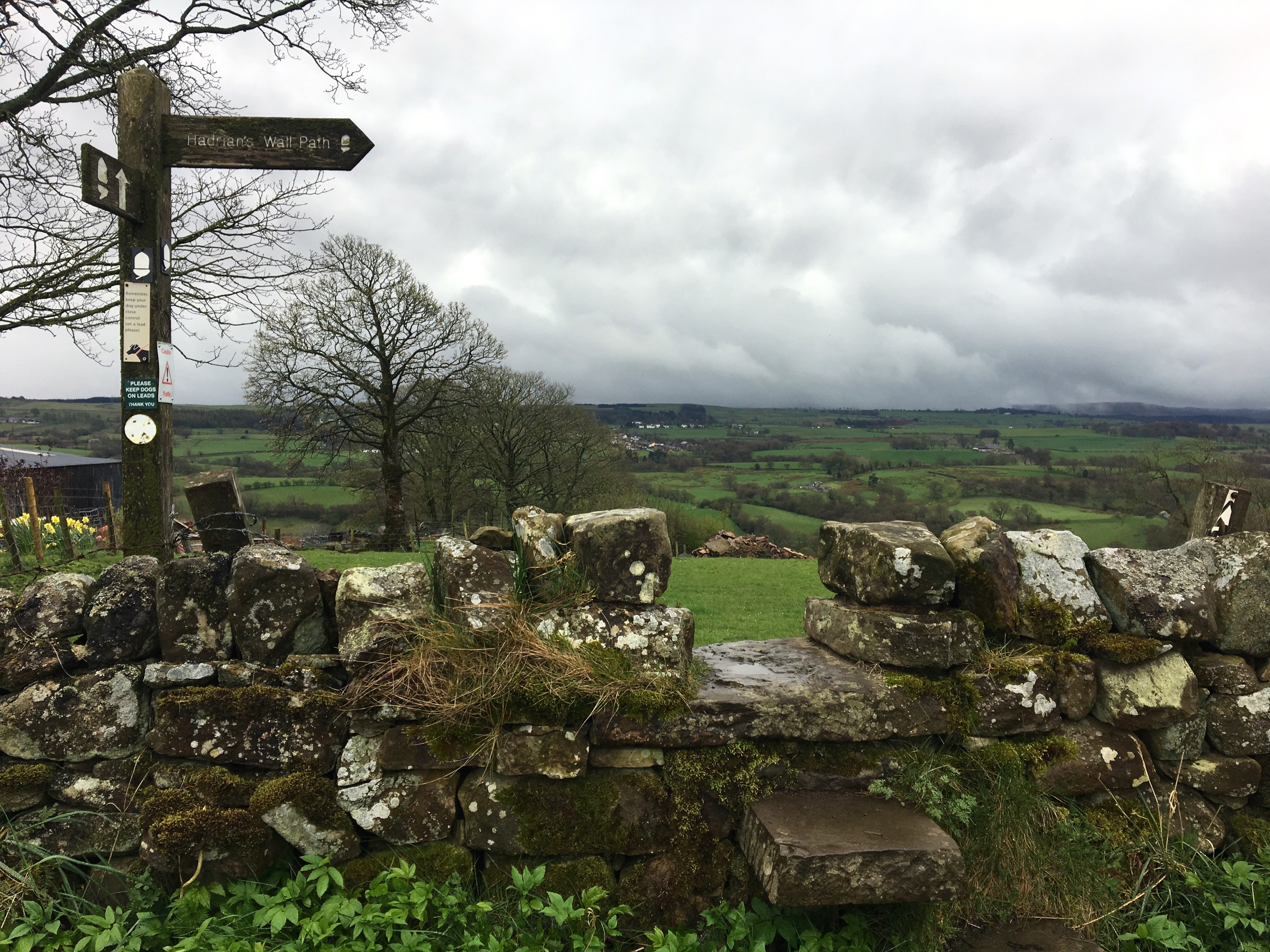 The skies stayed gray for another hour or two, but then they suddenly cleared and we were treated to sharp blue skies and fluffy white clouds for the rest of the day. And despite it being another long day, the walking felt good, with mostly flat terrain. 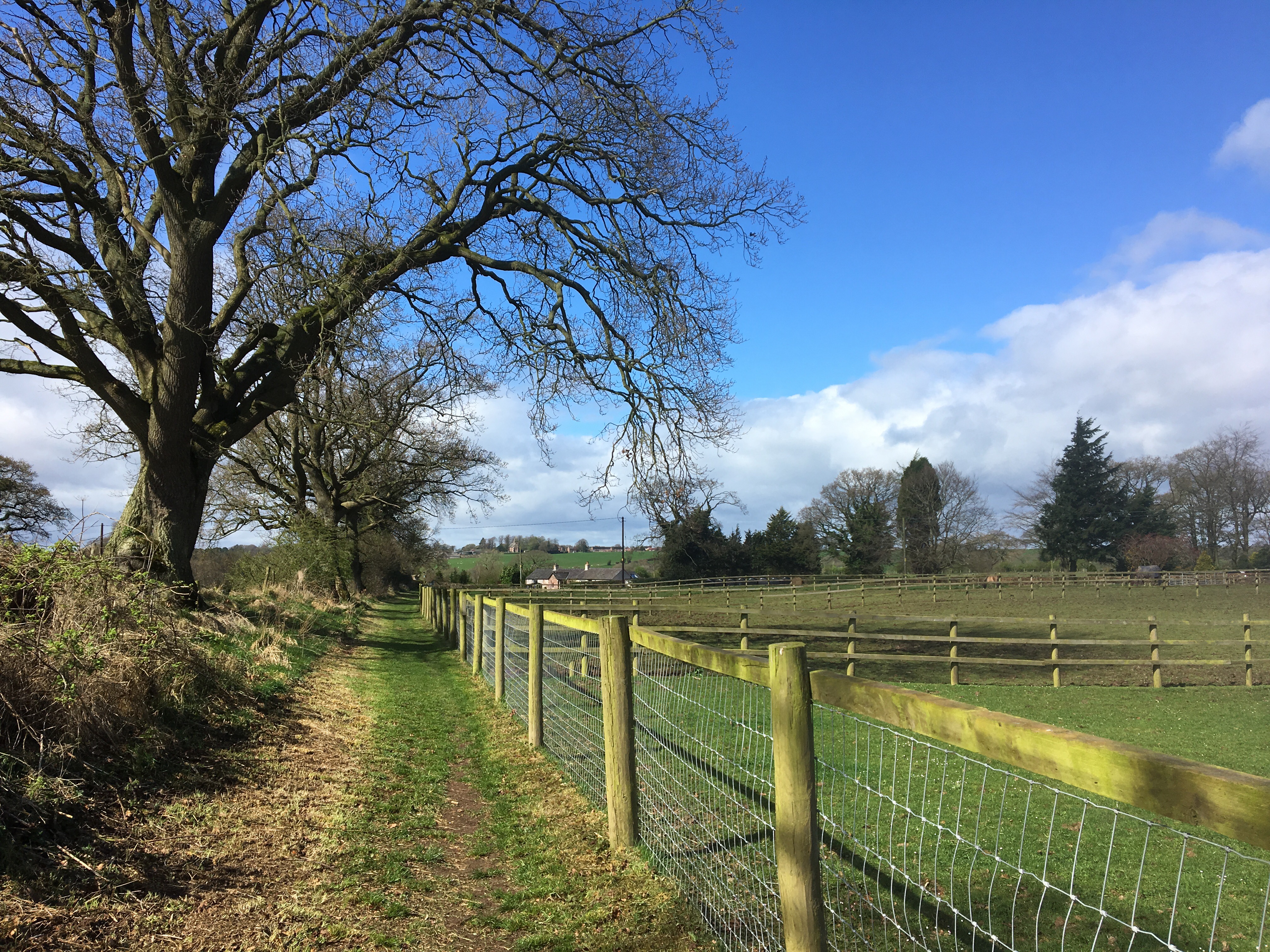 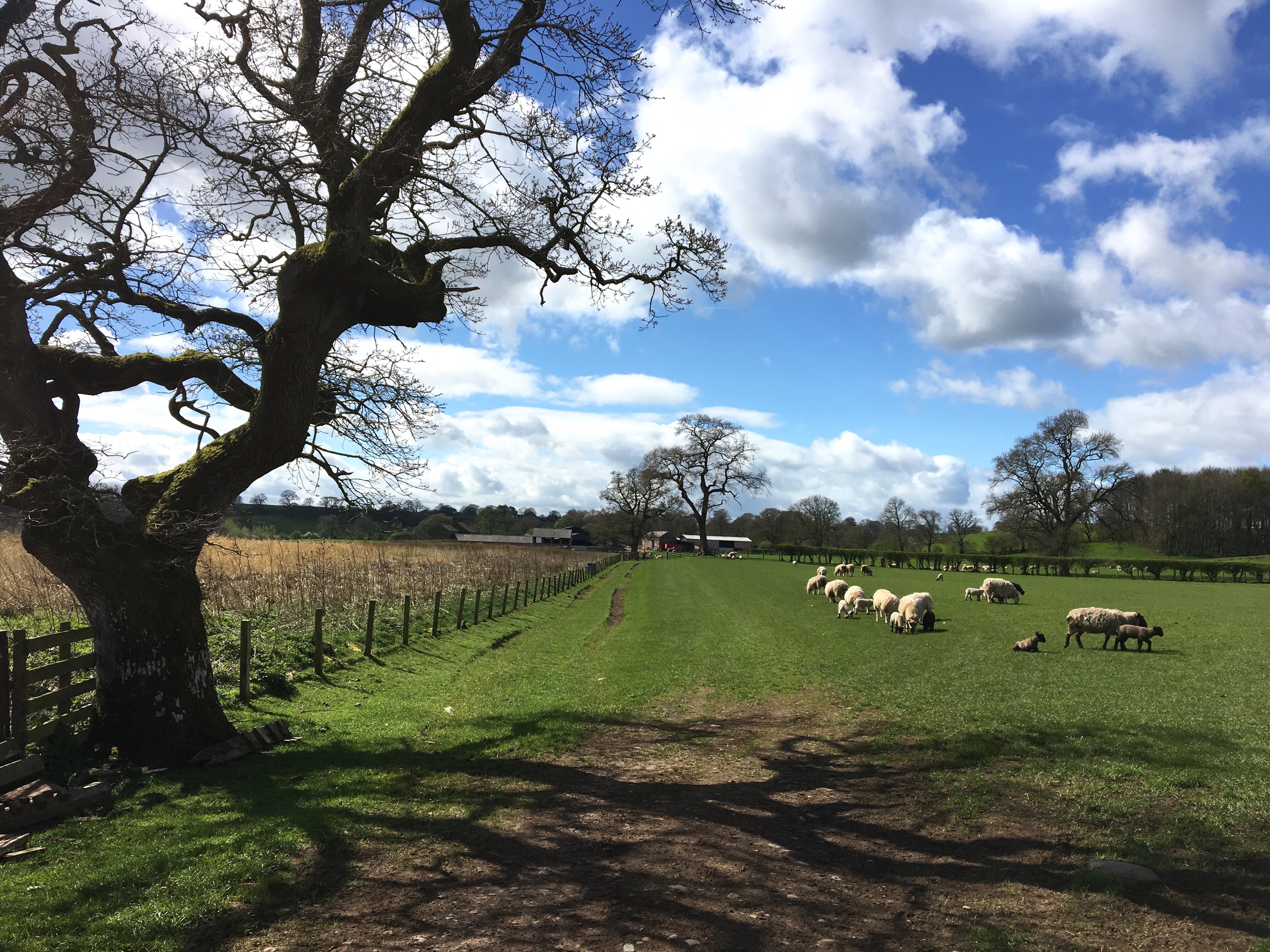 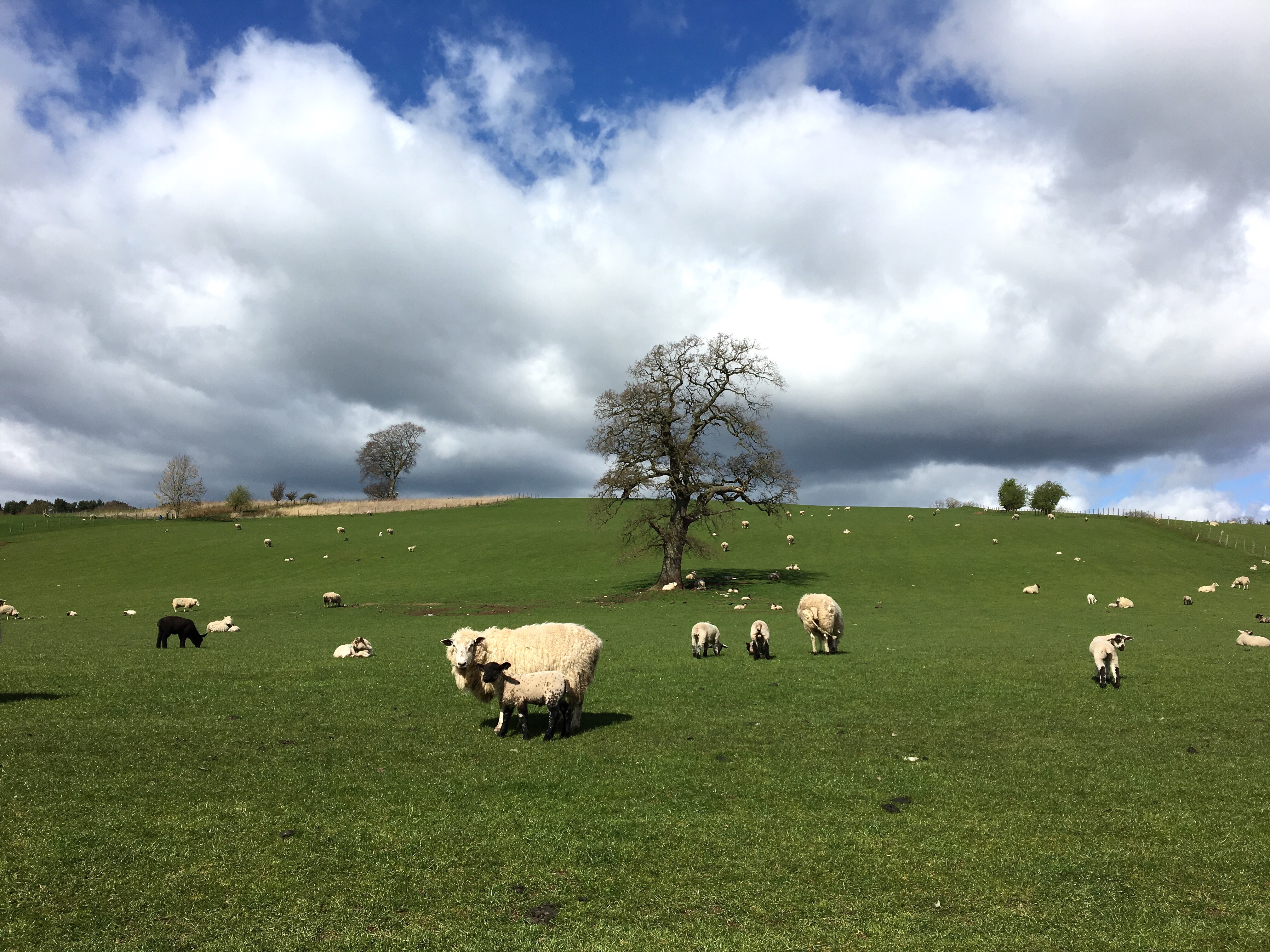 Aside from the rain, we had just a bit of more bad luck on this day. Both of the places where we planned to take breaks were closed! The first was a small tea shop in the village of Walton (this is also the last spot where the remains of the Wall are visible). Despite our guidebook advertising opening hours Tues-Sat, we arrived on a Wednesday to find it not open until Thursday. Grr. We hit the post office just before they shut their doors for the day (around noon), and a kind woman inside let us use their bathroom. We ate a snack at a picnic table in a park nearby, but then kept moving; in another 7-miles there would be an Inn where we could stop for a late lunch.

But when we arrived at the Stag Inn we discovered that this, too, was all closed up. Peering through the windows only led us to believe that- despite how pleasant the place looked from the outside- that maybe they had shuttered for good. (But later we found out that the place wouldn’t be open until sometime in the summer. We were mislead by our guidebooks once again, which promised opening hours all-year long). 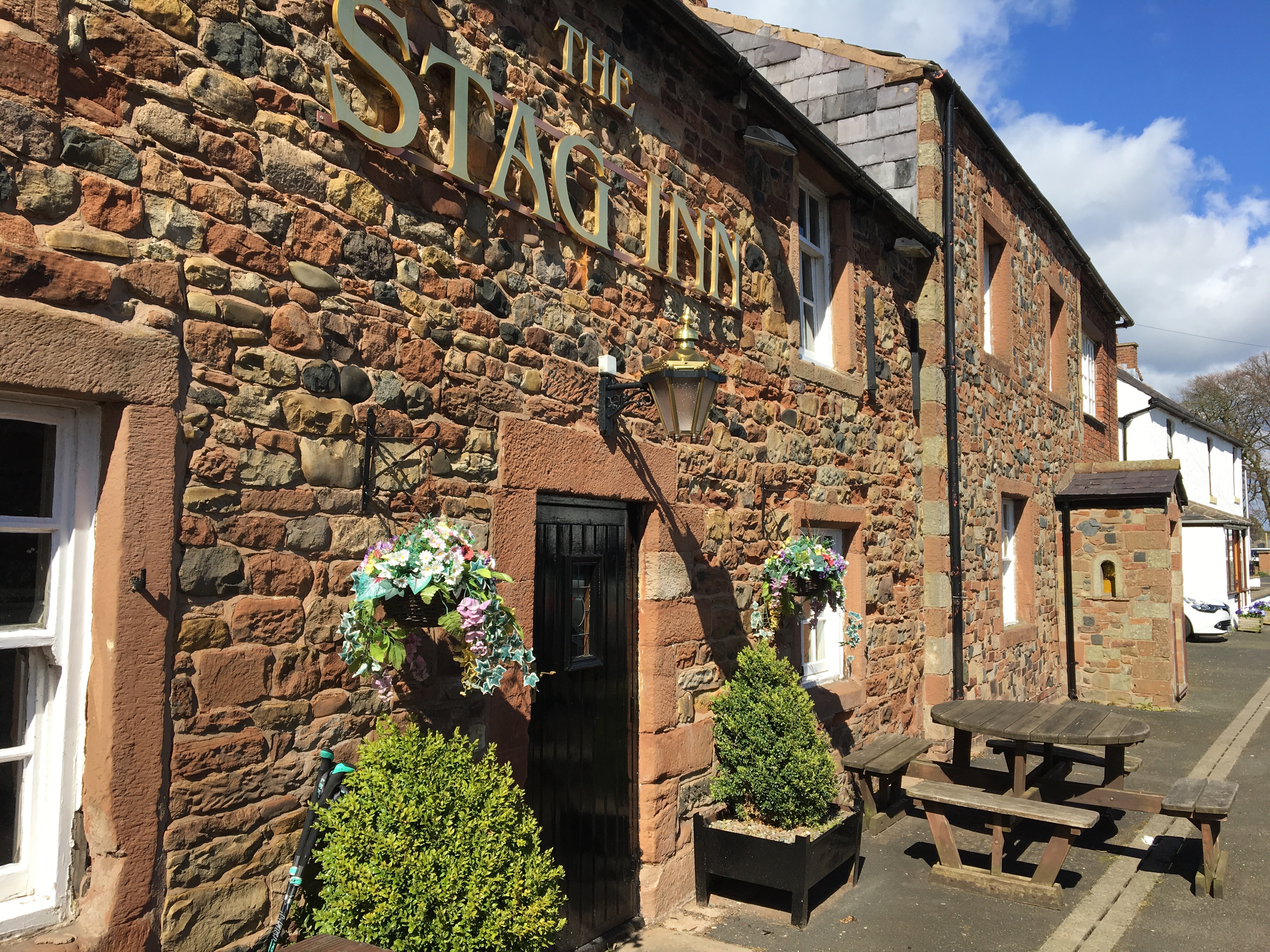 I didn’t have much food left on me, and I suppose I could have made it all the way to Carlisle but we made a short detour about 3-miles before the end of our day for what felt like the first true break. There was a pub in a hotel just off route, and after refueling we continued on for the last leg of the day.

The walk into Carlisle was so pleasant: a sunny stroll through a big park, full of dog walkers and joggers and bikers. 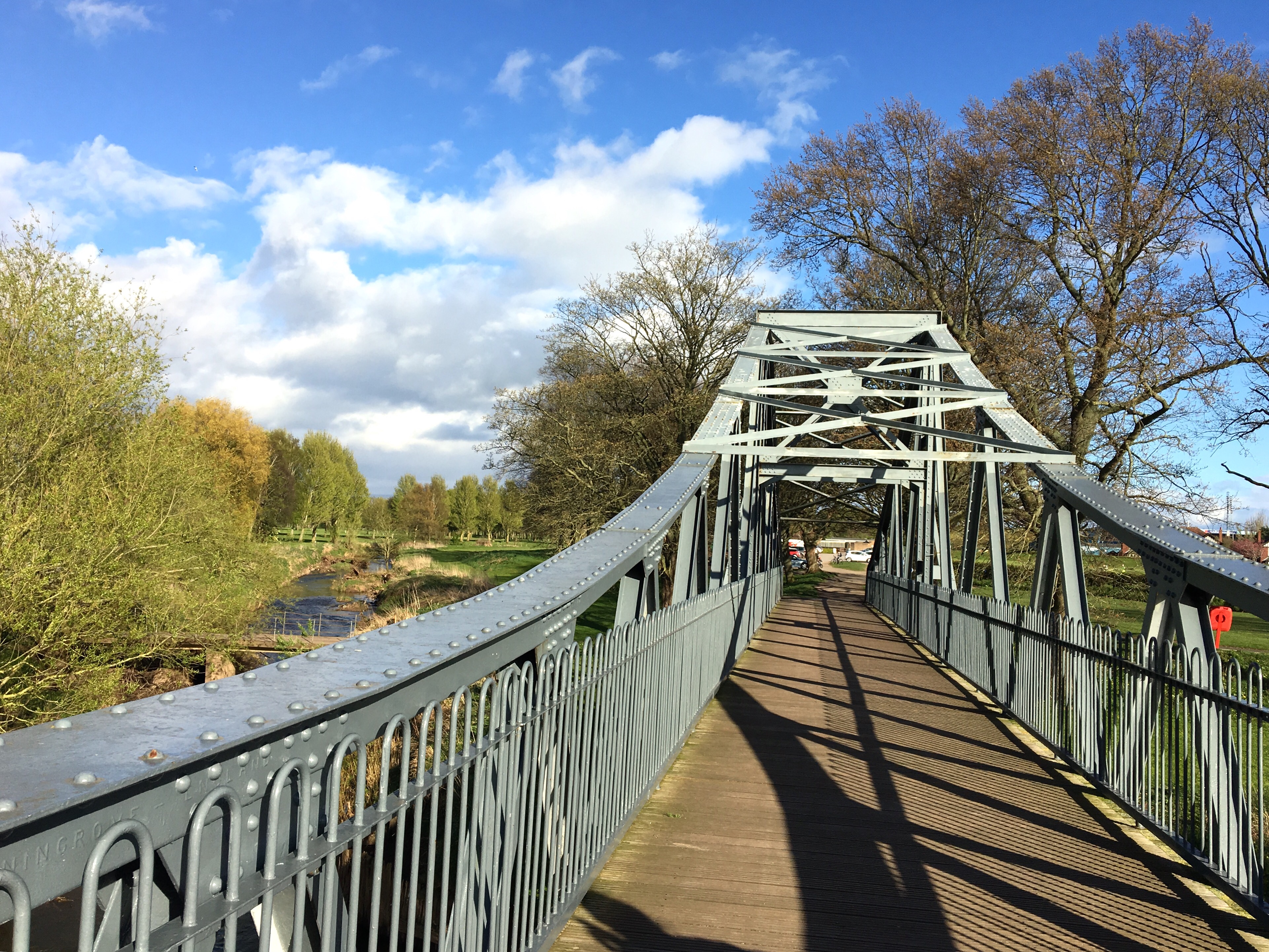 And when we arrived at our B&B it felt like a little paradise: a spacious room with three beds, a tea tray with biscuits, a shower with hot water, a window with a view over the neighboring rooftops. We could have stayed in our room for hours, but after showering and washing our socks, we headed into the city for some dinner and some wandering. 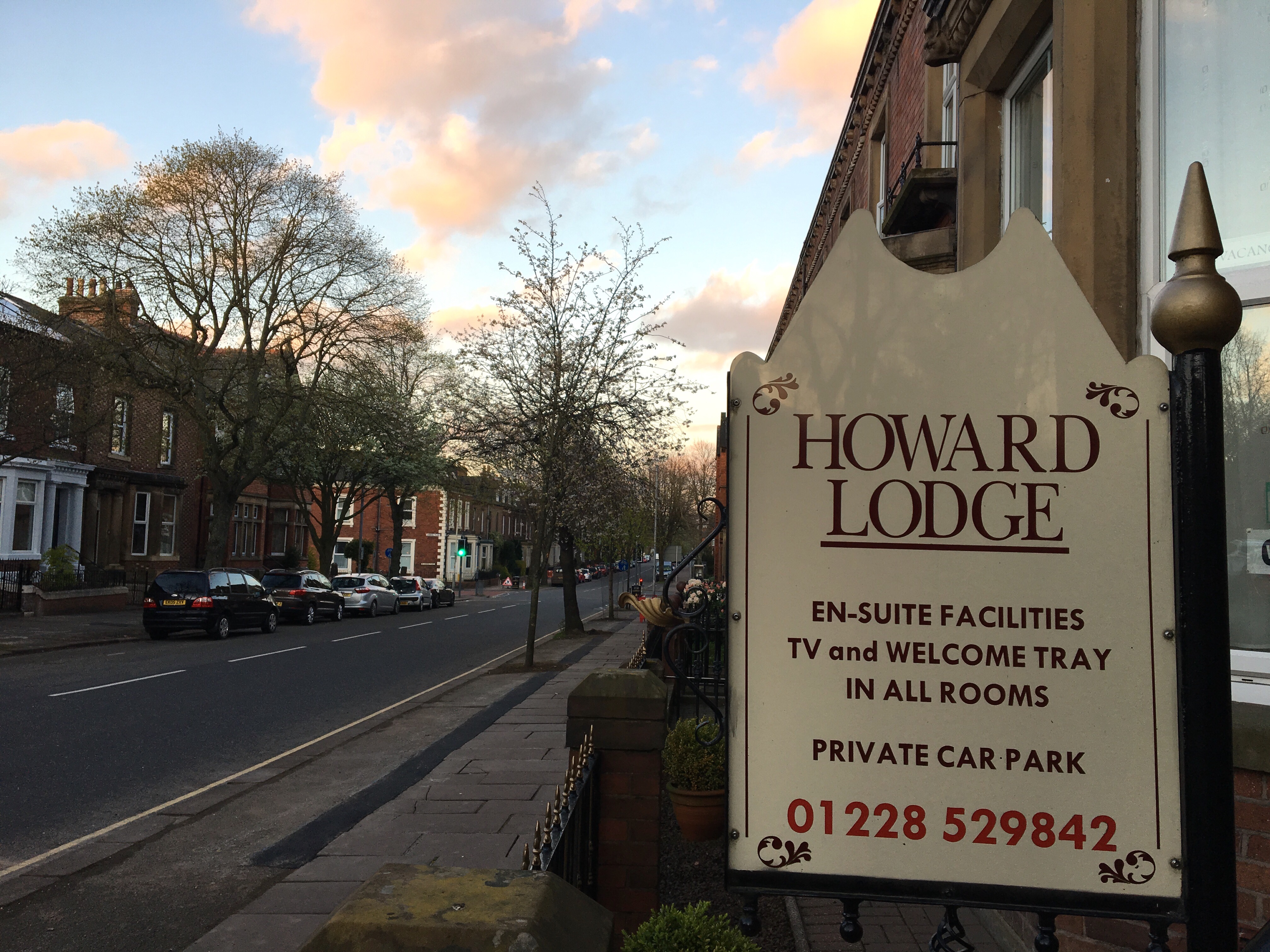 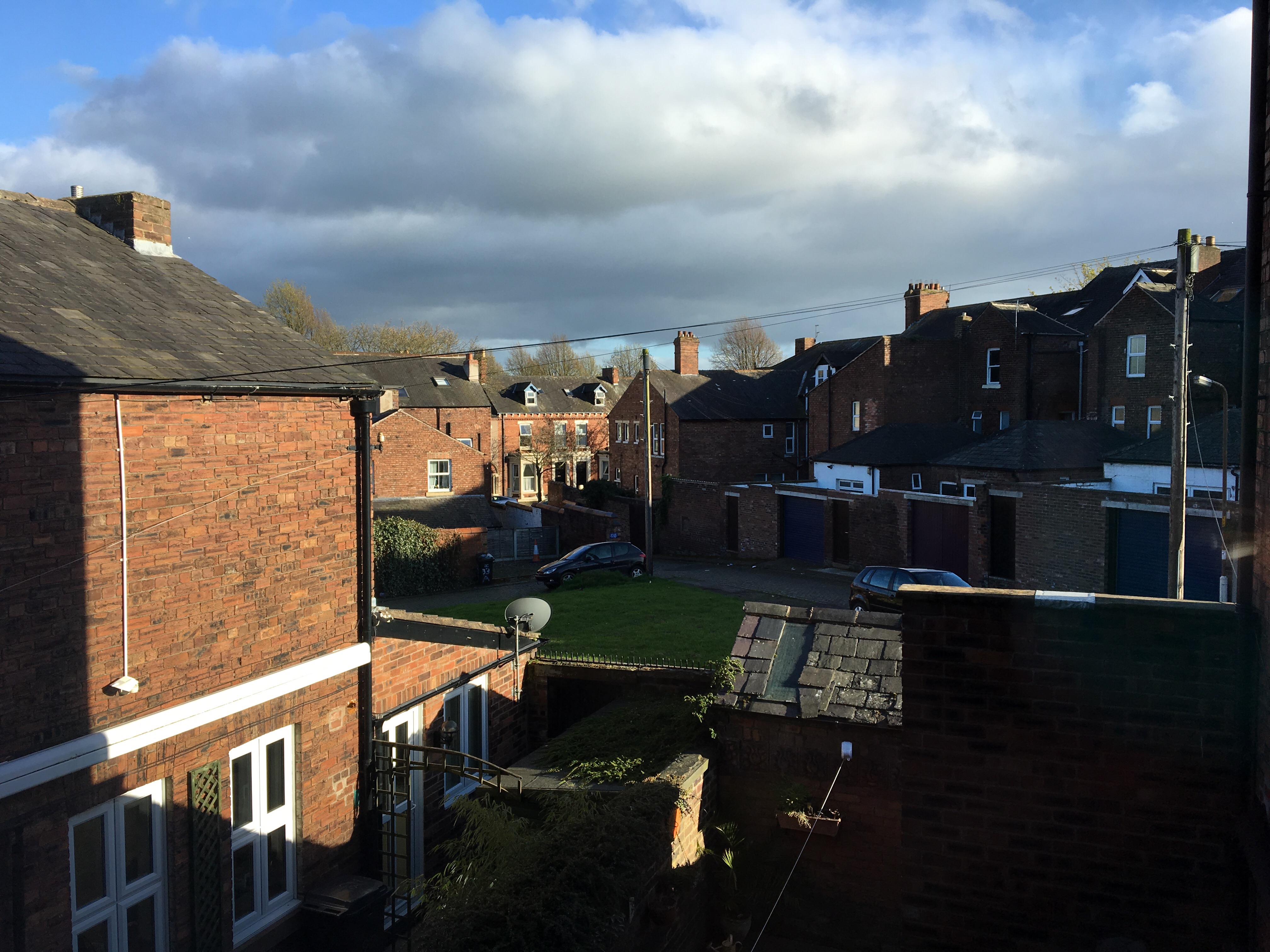 Carlisle is a place I definitely could have spent more time in, and I was strongly considering axing our plan to walk the next day. Our final day of walking was going to be a difficult feat (hehe): we needed to walk 15 miles to Bowness-on-Solway in enough time to catch a 1:39pm bus back to Carlisle (where we would catch a 3pm train back to London). This basically meant that we would have to walk at a fast pace with very minimal break time for the entire 15-miles, and then turn around and go right back to where we started that morning. No time to stop and smell the roses, no coffee breaks, no lingering over photos.

This isn’t my preferred way to walk, but it was either end our trek short and enjoy the sights in Carlisle (which was so tempting), or attempt to do the entire Hadrian’s Wall route, from the very beginning to the very end.

Can you guess which one we picked? Stay tuned. 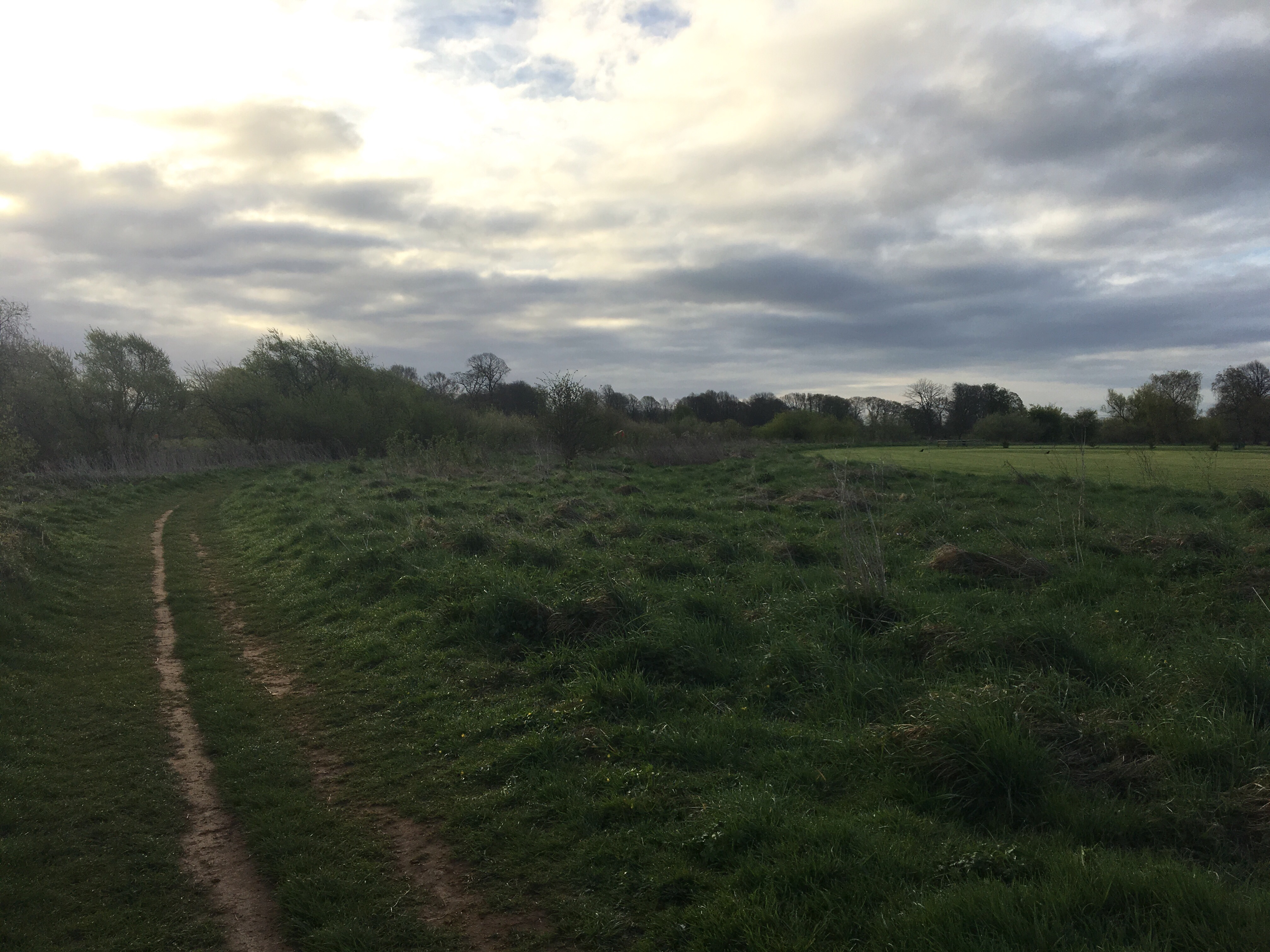