We’d arrived in Newcastle-upon-Tyne the day before, on a train from London. Newcastle wouldn’t be the start of our walk- not exactly- as the official beginning (or ending) of Hadrian’s Wall path is in Wallsend, a 15-minute metro ride east of the city. But it’s a great place to begin a long walk, with plenty of amenities, entertainment and transportation options.

I was exhausted when our train pulled into the station. I’d managed only 30-minutes of sleep on my overnight flight, along with just a bit of shut-eye on the train journey. But despite this fatigue, I managed to rebound after we dropped our packs in our hostel and set off to explore the city. I’d originally thought that maybe Heather and I could knock off the first 5-miles of our trek that Saturday afternoon; from Wallsend, the route passes directly back through Newcastle, and I thought this could be a nice introduction to the walk. 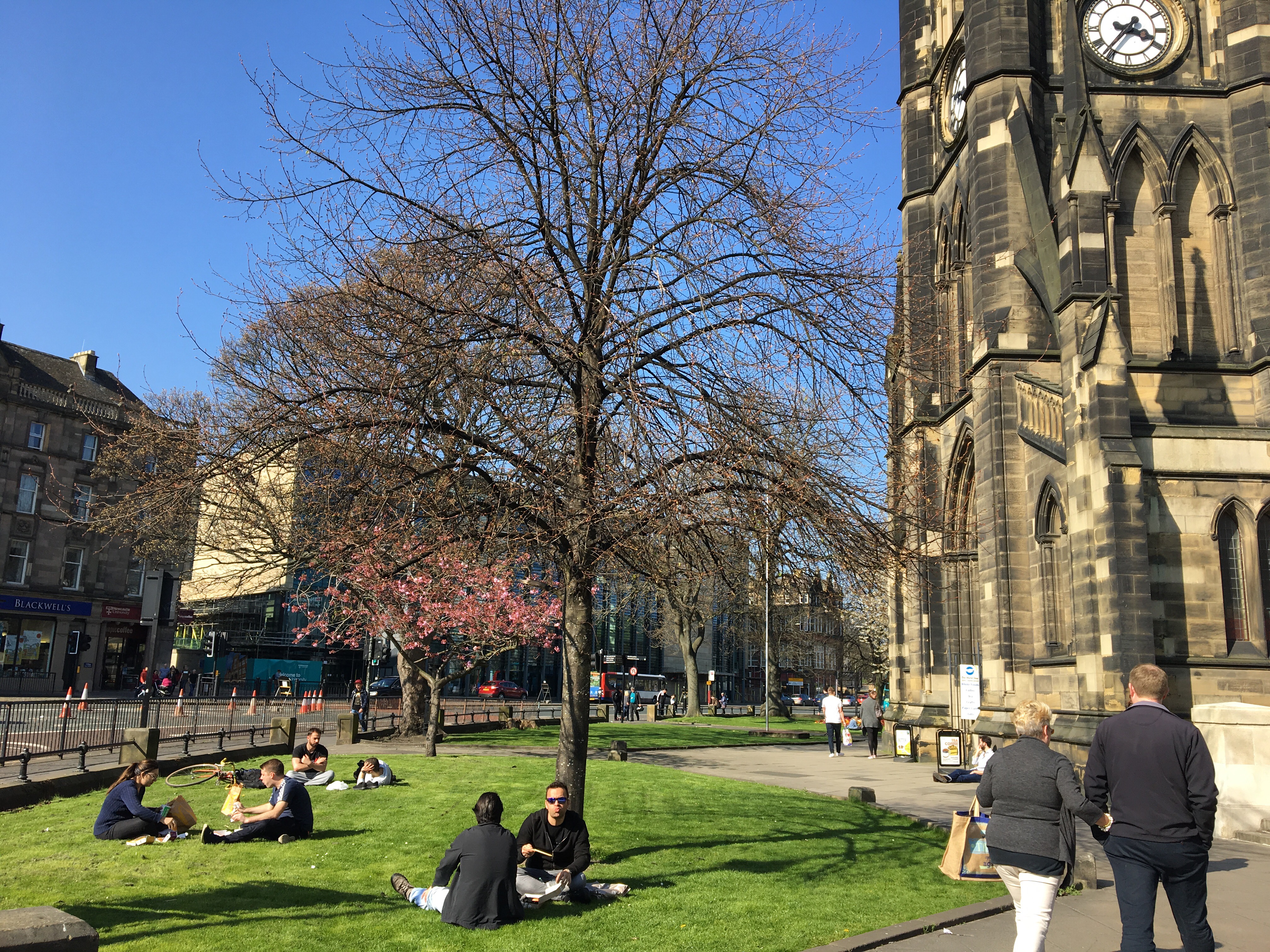 But I quickly realized that there was no way I could do a walk on so little sleep, so we meandered through the city instead, moving slowly and soaking up unexpected warm air and sunshine (Northern England was experiencing a bit of a heat wave at the beginning of our trip!). We wandered up to The Great North Museum: Hancock, a free museum with a large room dedicated to Hadrian’s Wall. There was an interactive model of the wall that snaked through the room, as well as lots of wall artifacts on display.

This would have been a great introduction to the walk IF the museum hadn’t decided to close an hour early that day. We only had about 10-minutes to look at the displays but maybe it was just as well: there’s something I like about a journey where I’m heading into the unknown. I didn’t want to see too much of the wall before I actually saw the wall itself.

We walked along the Quayside and ate an excellent dinner at a place called Red House. The only thing on the menu were their homemade butcher pies, mash and peas, and thank goodness for that. It was one of the best meals of the trip! 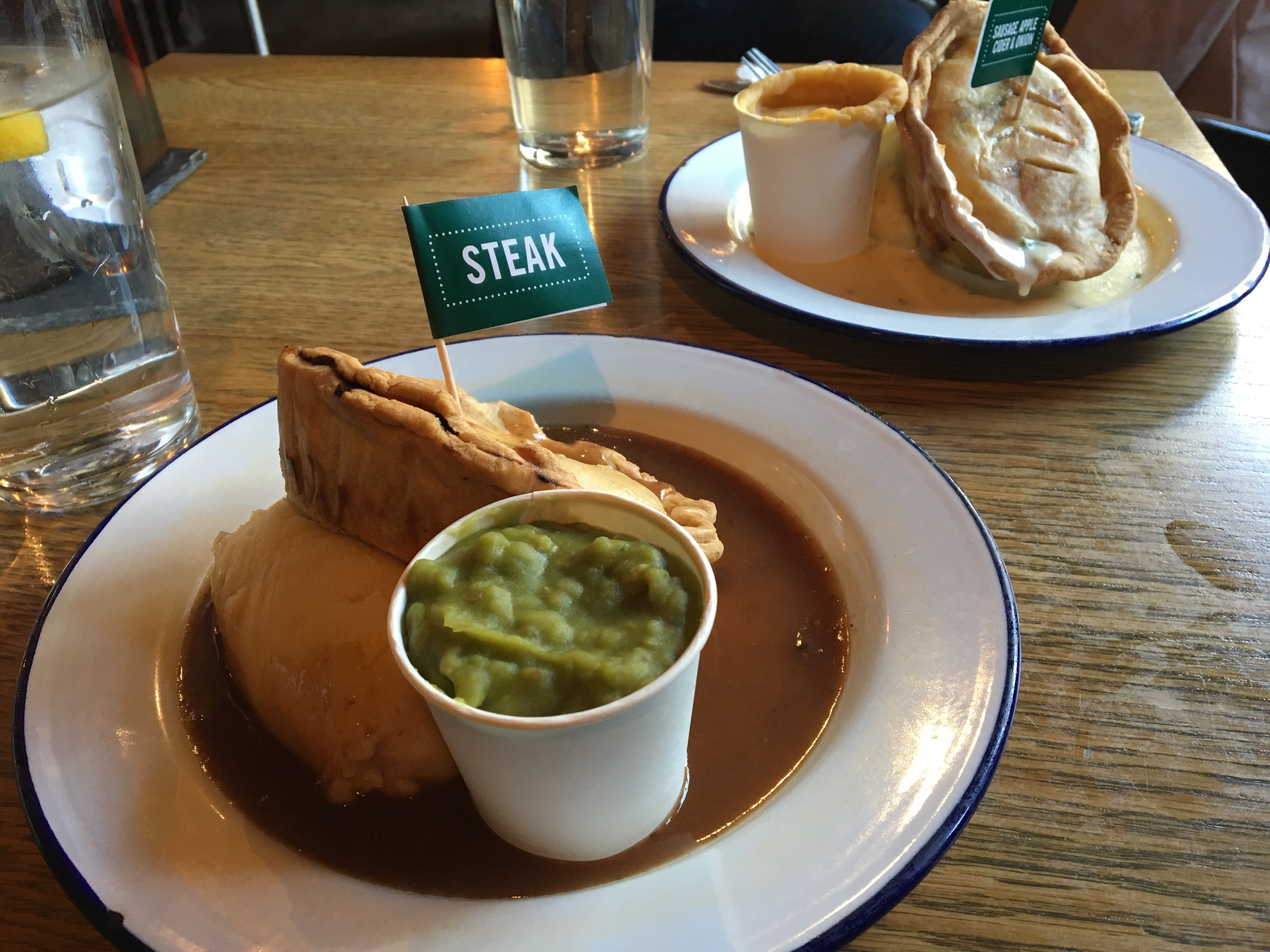 Sunday morning rolled around and we both agreed that staying in a hostel might not have been the best way to start a trek. The hostel itself was fine, but we were there on a Saturday night and most of the others staying in our room and down the hall weren’t trying to get a full night’s sleep before a long walk. So it was a long night of people coming and going, drunk bunk mates arriving back to the room at 4am, and generally just a lot of noise. 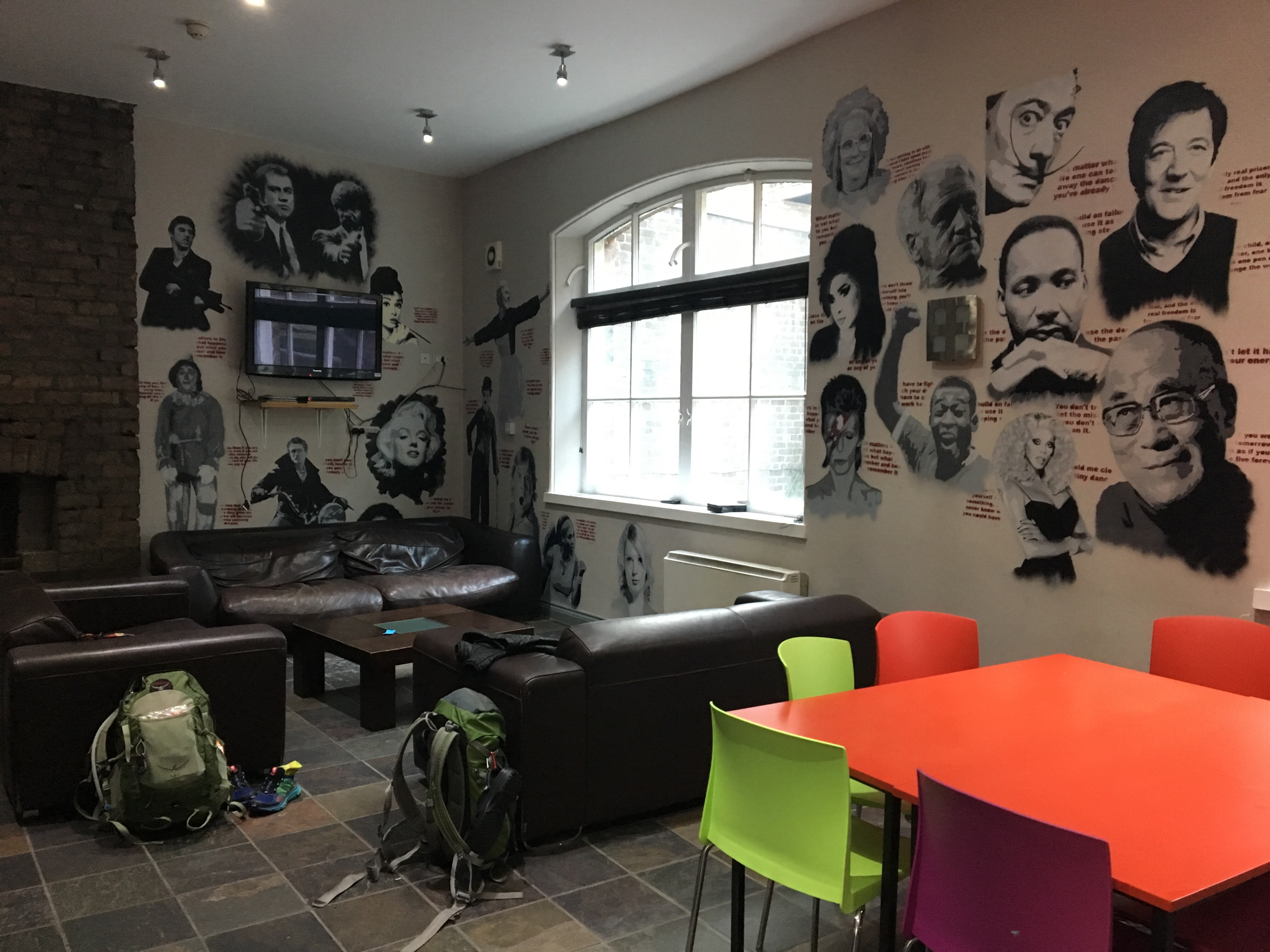 But, that’s nothing that a good cup of coffee can’t fix! We left the hostel early and grabbed drinks and pastries from the only open shop in sight, then jumped on the metro for the quick ride out to Wallsend.

Now, a note about the direction of this walk. Heather and I were walking east to west, starting in Wallsend and ending in Bowness-on-Solway. People do walk in this direction, but the more I learned about the path (and the more we heard as we encountered people on our journey), the preferred direction seems to be west to east. Supposedly, views of the wall are better in this direction, plus the wind will be at your back, pushing you forward as you walk. (Oh, just wait until I write about Day 3 of our journey… the wind was mighty. Really mighty).

And I’d read all of this while I was planning the trip, but something made me choose to go east to west. Honestly, I think some of this has to do with the Camino. Or my long-held dreams about my east-to-west road trip across the United States. “Go west, young man.” Somehow, walking east just doesn’t have the same ring to it.

So beginning in the east it was. Despite studying two different guide books, we had some trouble finding the start of the walk, but eventually we found ourselves on a path, snapped a photo of the first Hadrian’s Wall sign we saw, and began walking. 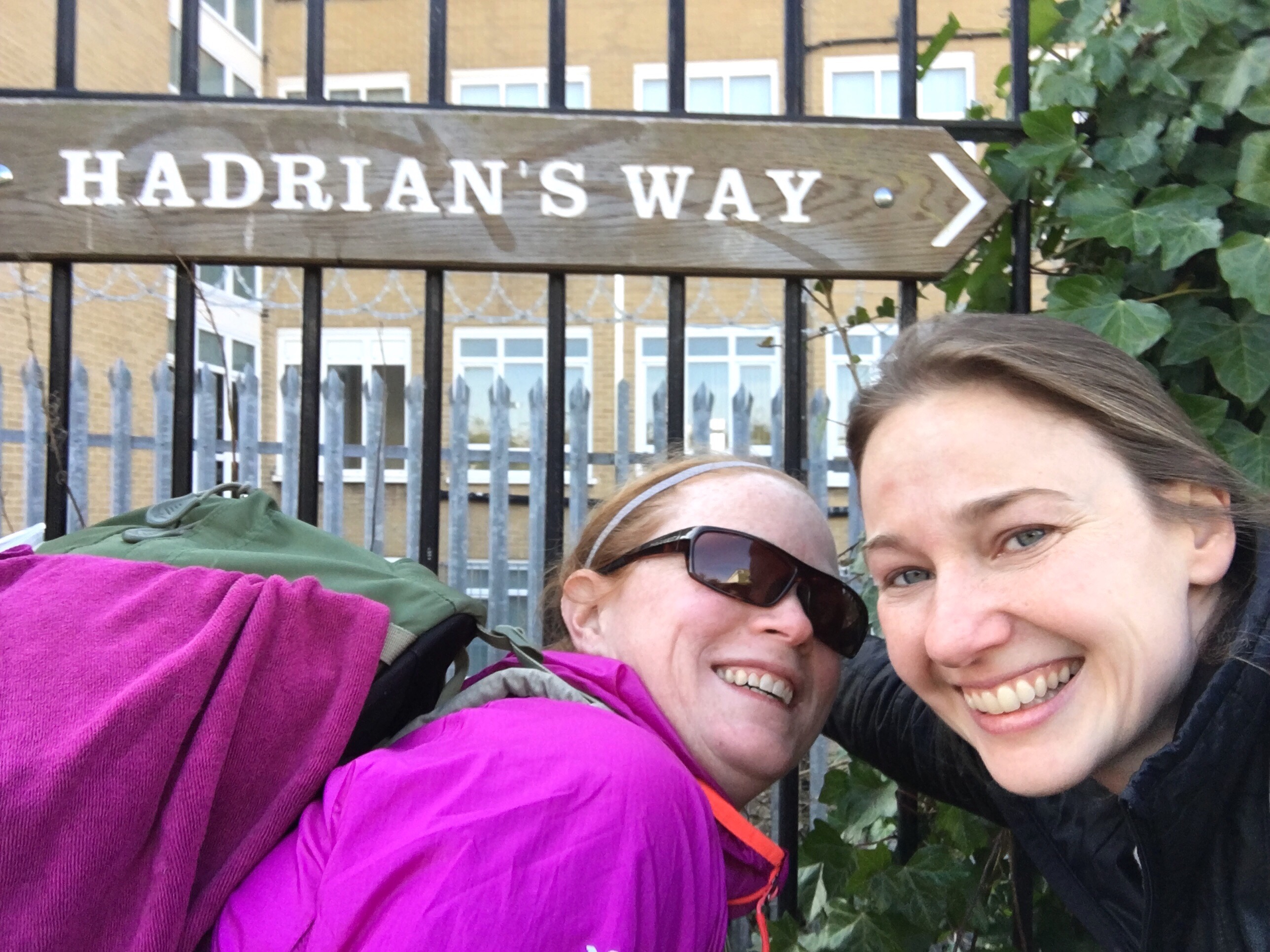 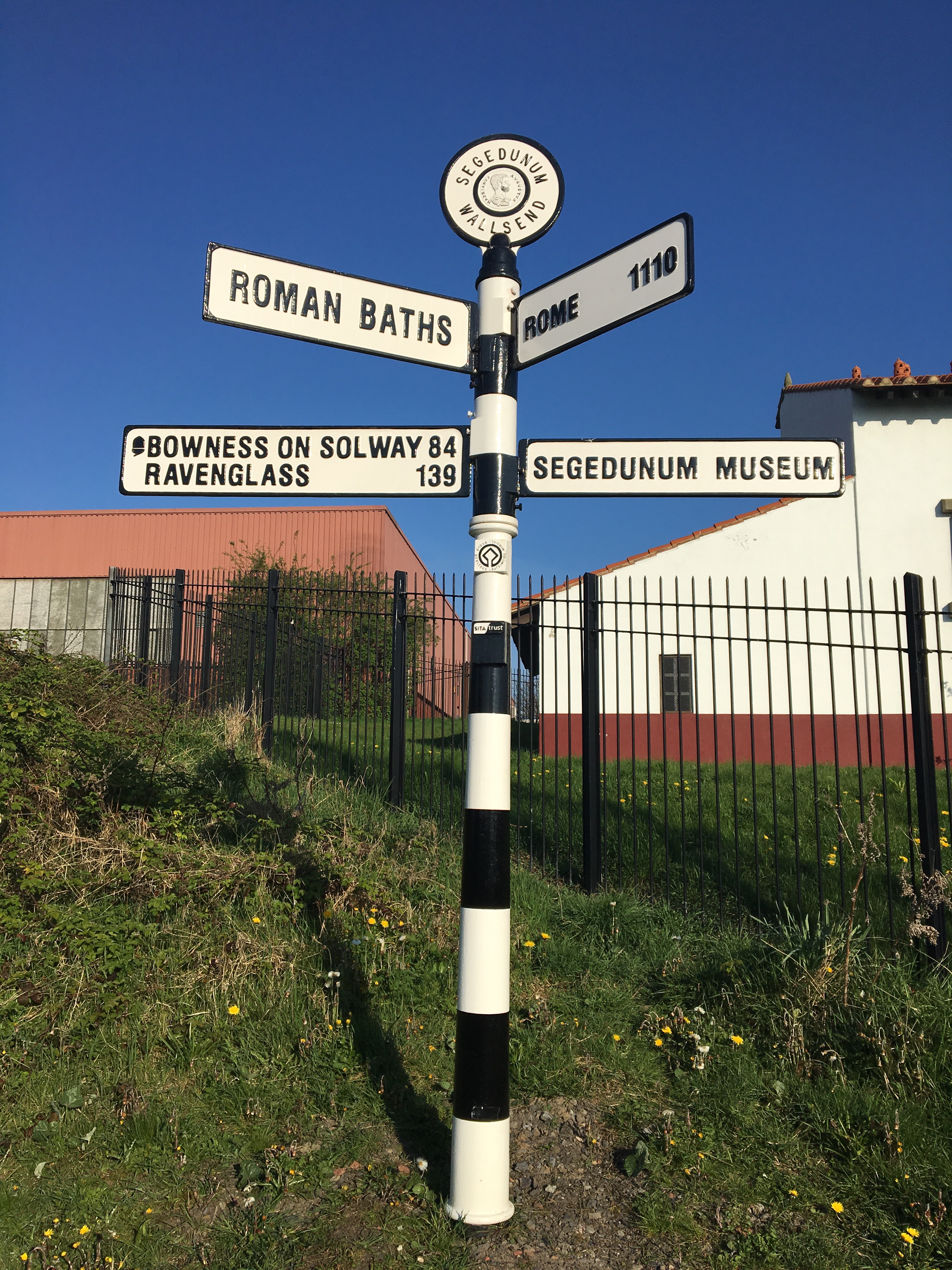 The day was glorious. Soon, our layers were peeled off and we were walking in t-shirts. Within an hour I found a suitable walking stick, and before long the path wound down to Walker Riverside Park, where we were able to walk along the Tyne for several miles as it lead us back into Newcastle. 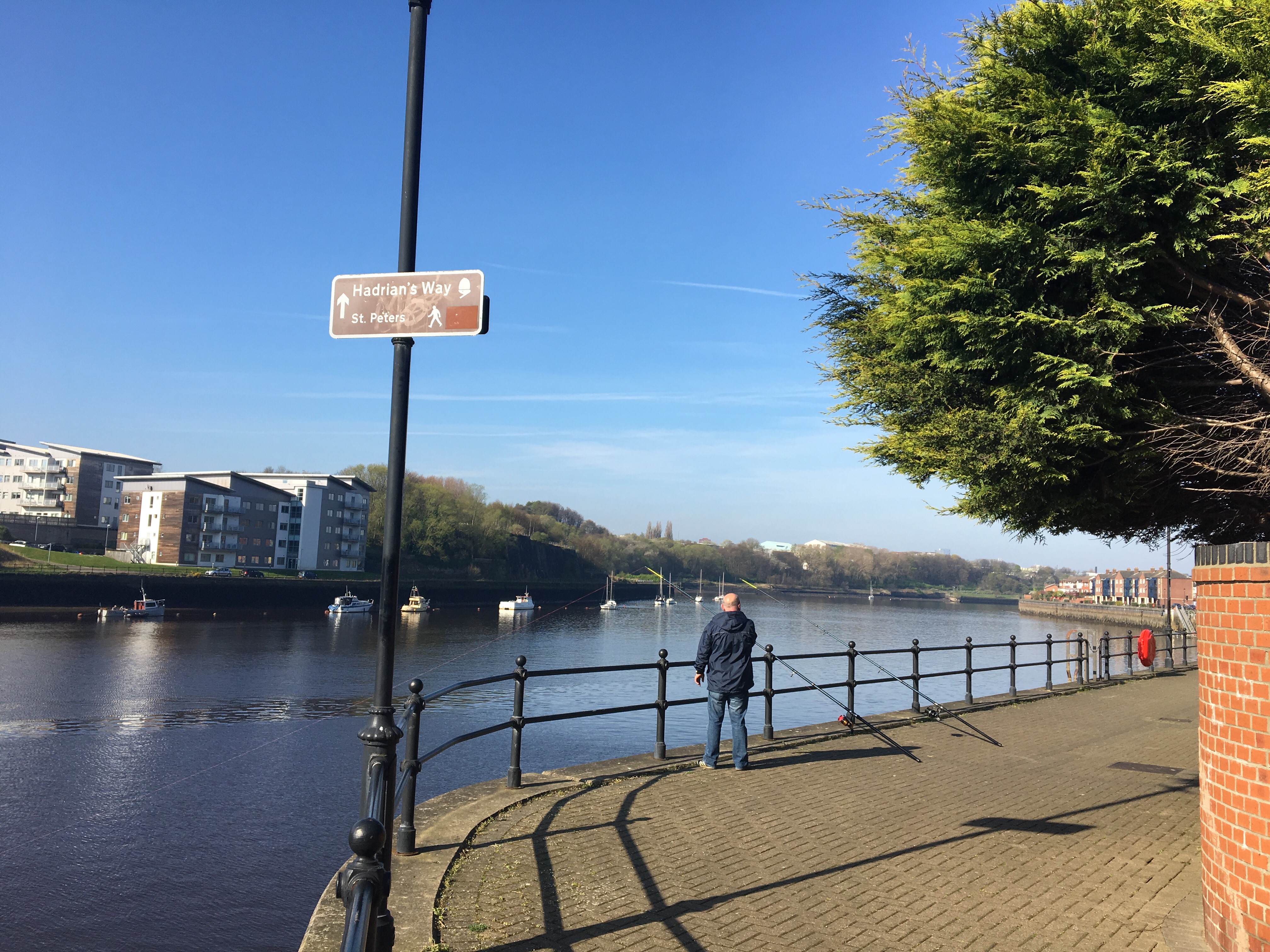 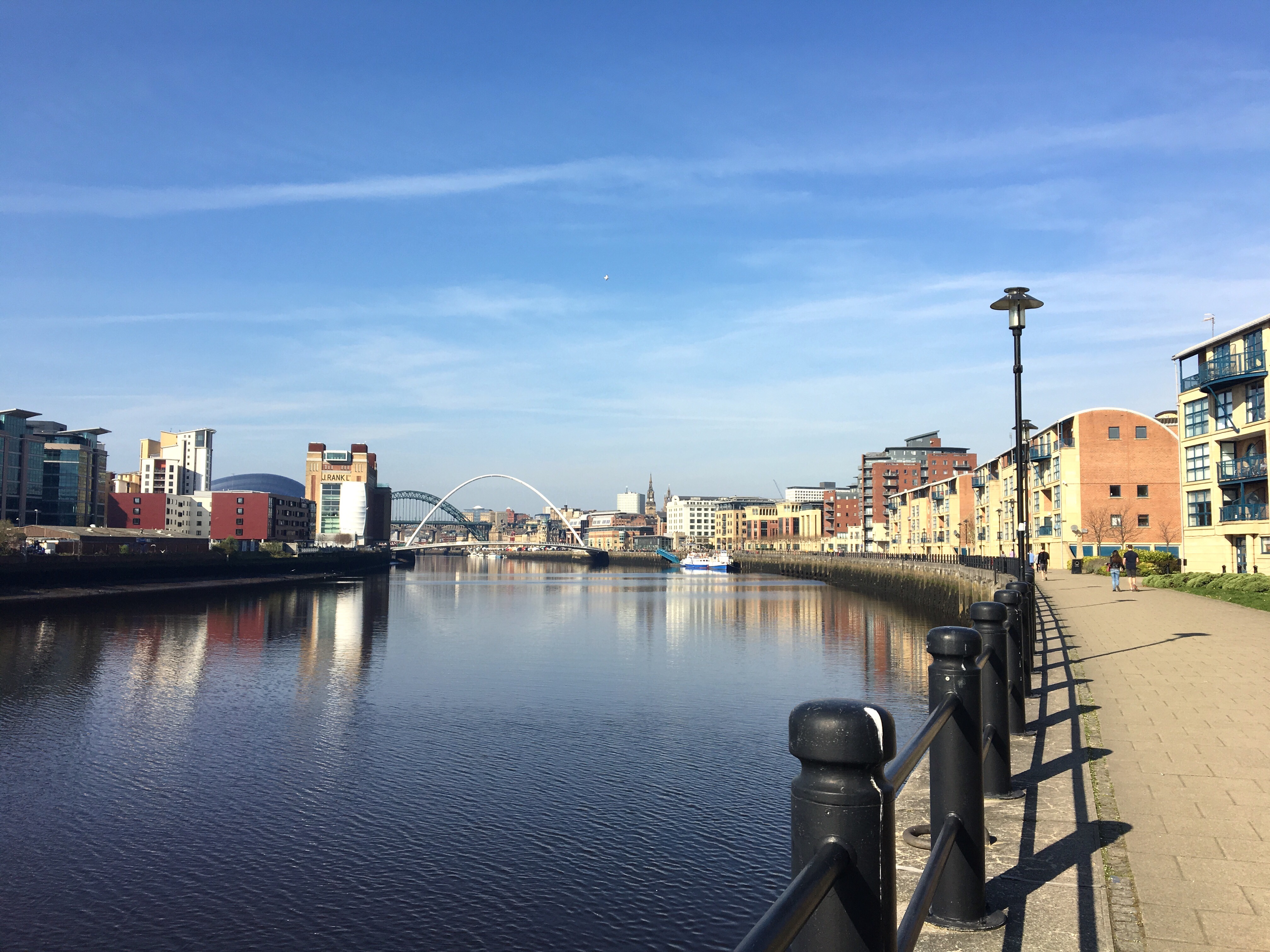 And once we were in Newcastle- still walking along the Tyne- we passed through a large, bustling outdoor market. It was like a slice of heaven for a walker! The sun was shining, families were out and about, and there were what seemed like hundreds of stalls filled with crafts and mementos and food and treats. There was ice cream and crepes and baked goods and tacos and pulled-pork sandwiches and coffee. We saw several little carts or trucks that were converted into moveable cafes, an espresso machine fitted into the trunk space.

Heather and I lamented the fact that we were passing through around 10am, too early for lunch. But we lingered there anyway, and I bought a little package of coffee beans to bring home, as well as a large loaf of artisan bread. (It was a really, really large loaf of bread. I struggled a bit to fit it into my pack, and once I started walking I began to wonder why I would buy such a large thing… but it turns out that the bread came in handy over the course of my walk. Lesson #1: Never pass up the opportunity to buy a loaf of fresh bread). 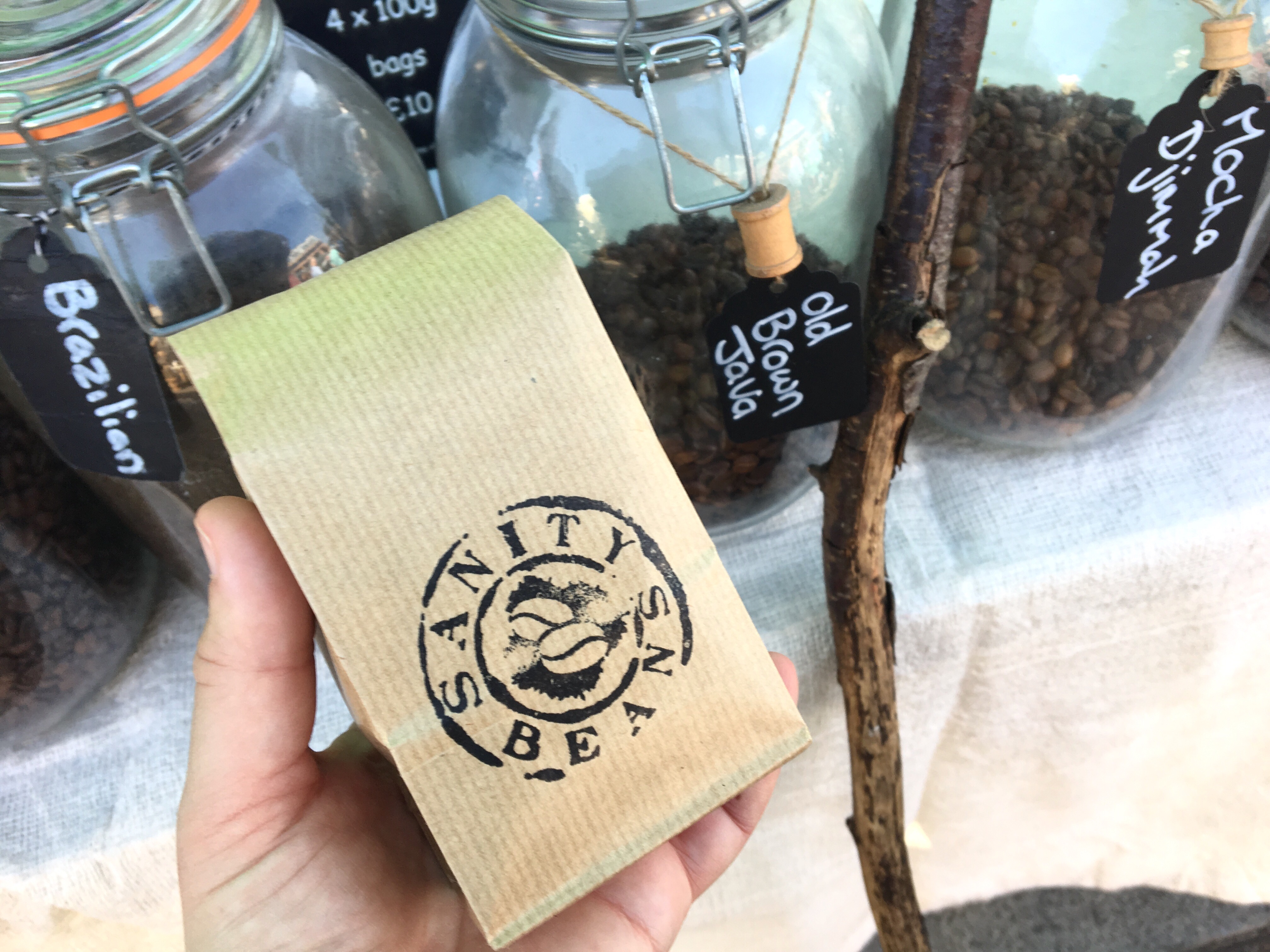 The walk carried us out of Newcastle, continuing along the River Tyne but eventually meandering off. It continues for a stretch through the Tyne Riverside Country Park, which was crowded on such a warm and sunny day. I could only find two drawbacks to this first day of walking. For starters, there’s very little evidence of Hadrian’s Wall along this stretch (aside from a bit of wall at the very beginning of the route in Wallsend, but Heather and I didn’t exactly know what we were looking for so it’s anyone’s guess as to whether we actually saw the Wall here or not). And the second is that the entire day- all 15 miles- was on pavement. This is a tough way to begin a walk, and my feet were aching by the end of the day. 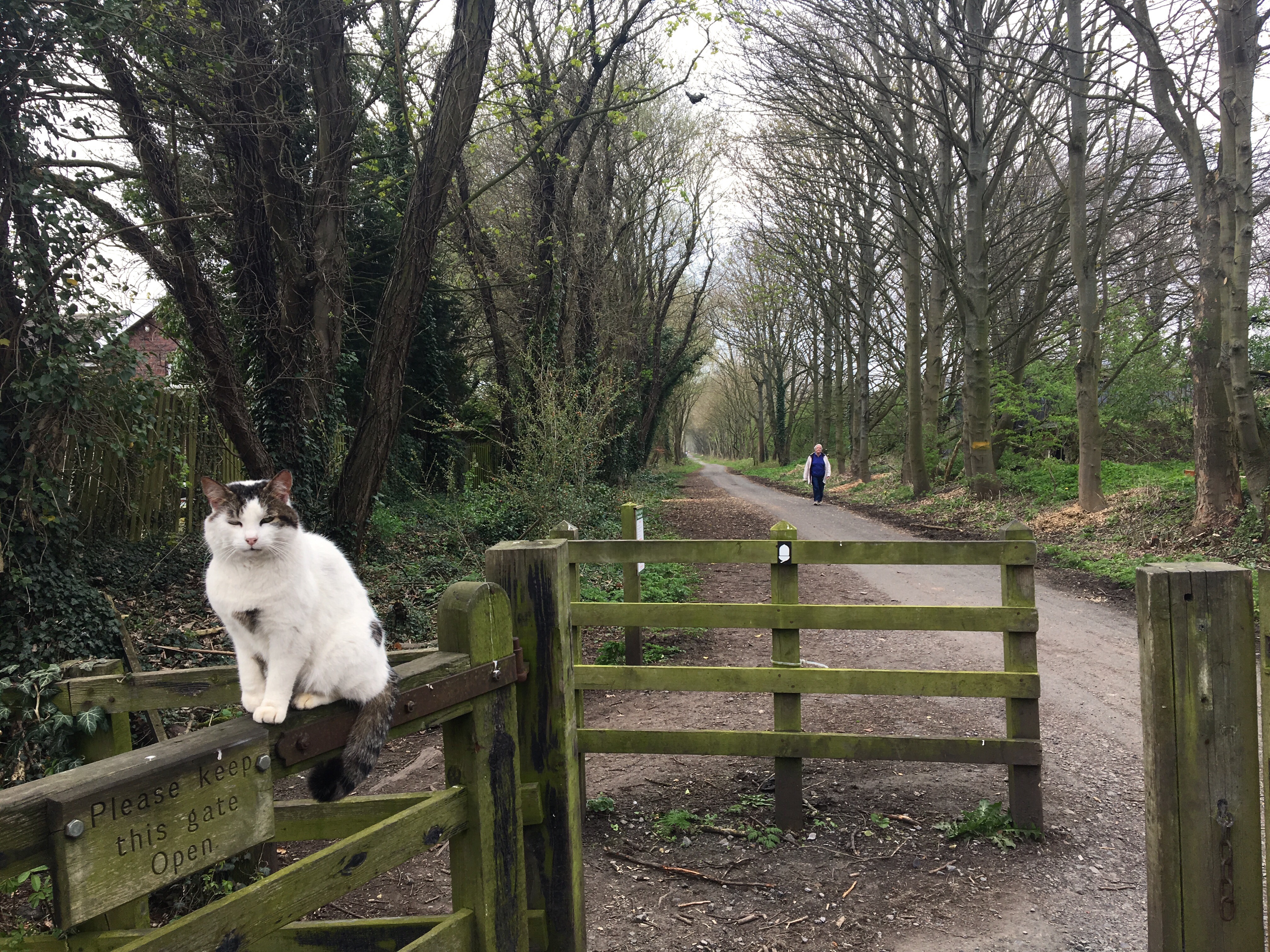 But overall, what a beautiful start! Riverside paths and parks, sunshine and outdoor markets, coffee and bread, a classic Sunday roast for lunch, and a wonderful spot to rest our heads at the end of the day. We stayed at Houghton North Farm in Heddon-on-the-Wall; some of the farm’s buildings were made with stone from Hadrian’s Wall! (This is typical in the villages and towns close to the route of the wall; once the Romans left, much of the wall was dismantled and the stone was used for other purposes by local landowners). I suppose that our lodging at Houghton North Farm could be considered a hostel or a bunkhouse, but with a twin room and only a few other people staying there, it felt both spacious and cozy. 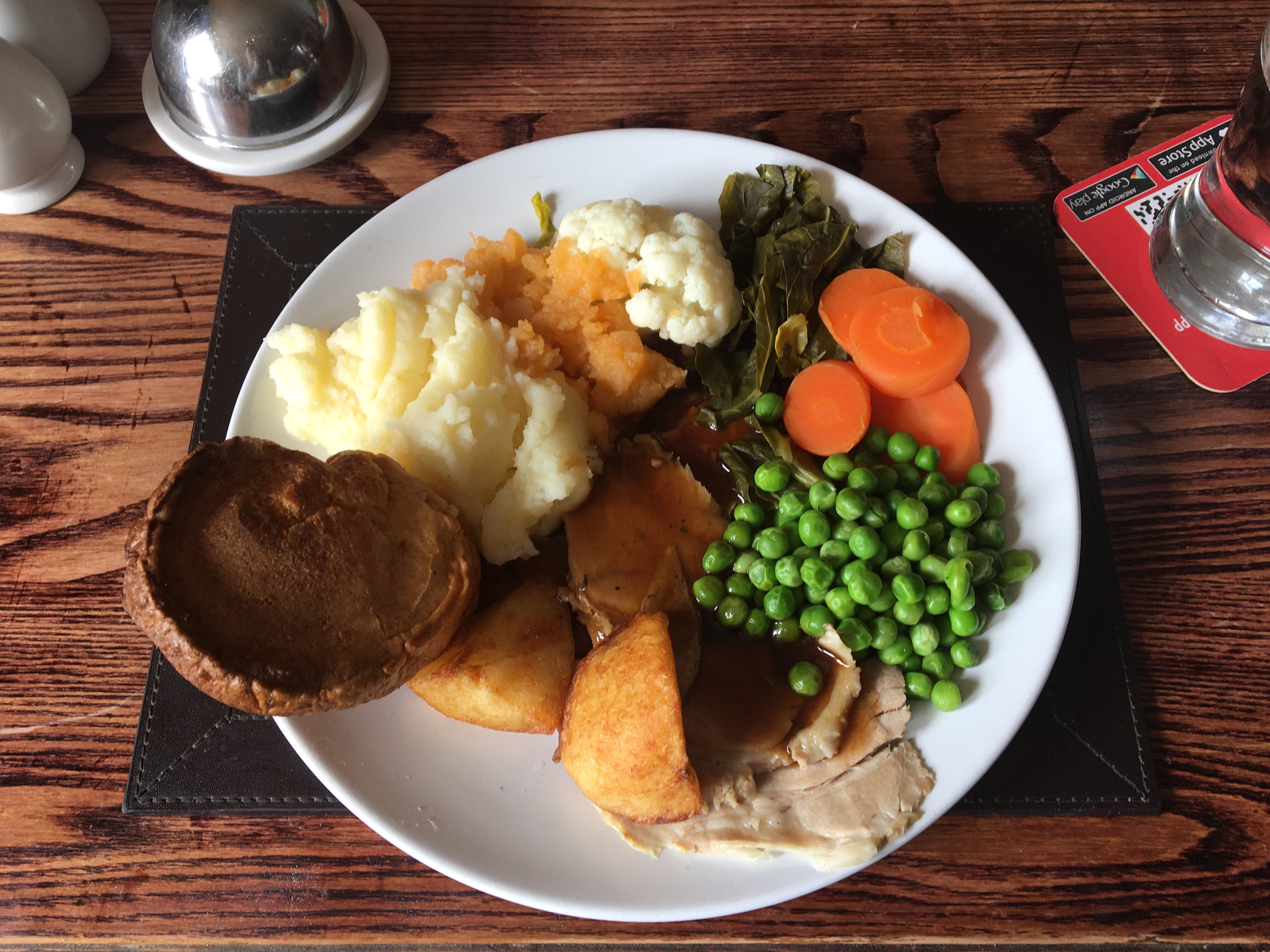 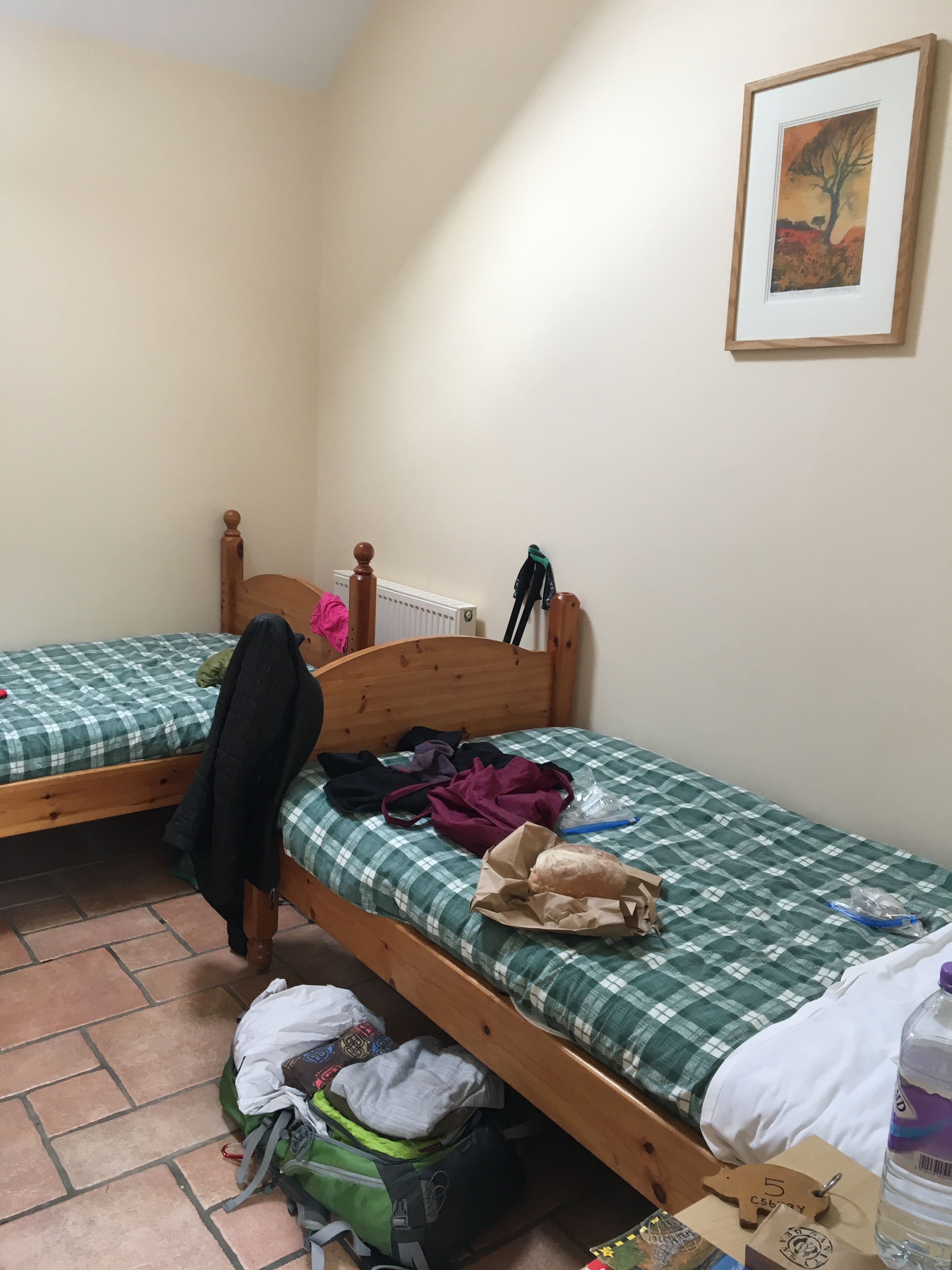 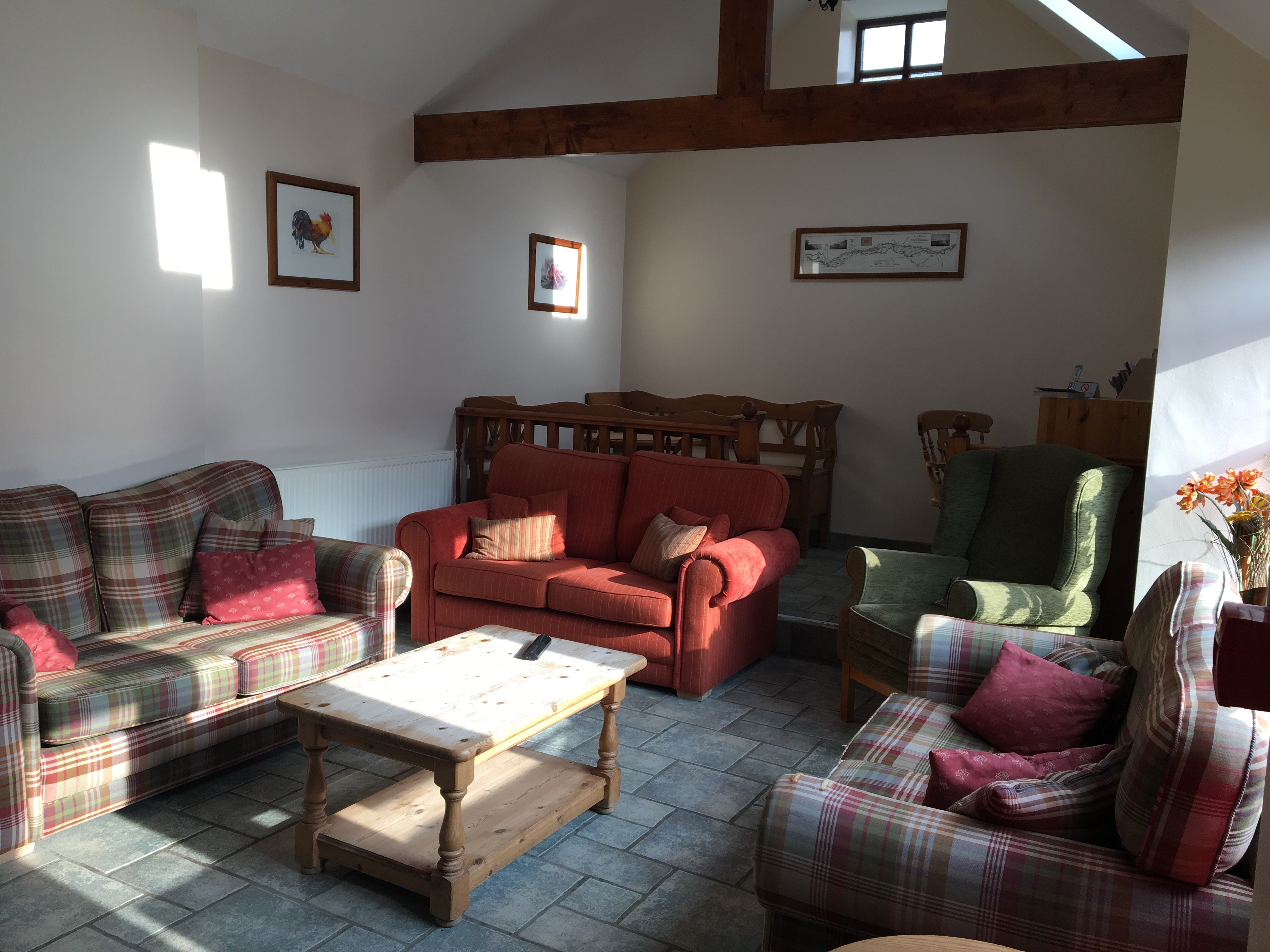 Overall, it was a very satisfying and great start to the journey. By the end of the day, I could feel that I was back in the walking groove, and it was a good thing, too. Because the next day, we’d be tackling a 23-mile/35km stage! 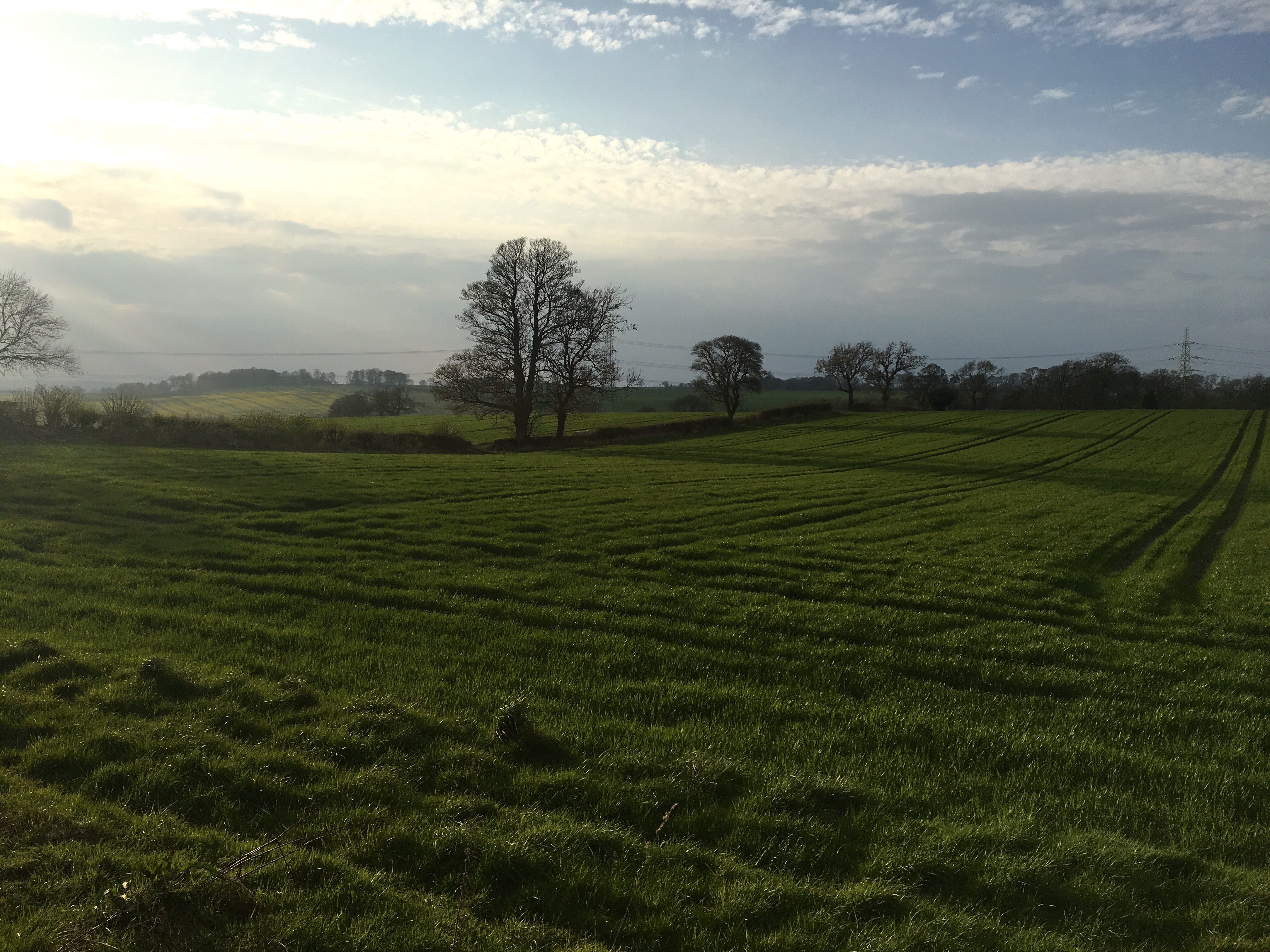