Last week, I discovered a secret passageway in my park.

Well, that’s not exactly true, this “secret passageway” was actually just a short stretch of trail that led off of the main trail that I was already on. But it felt like a secret. 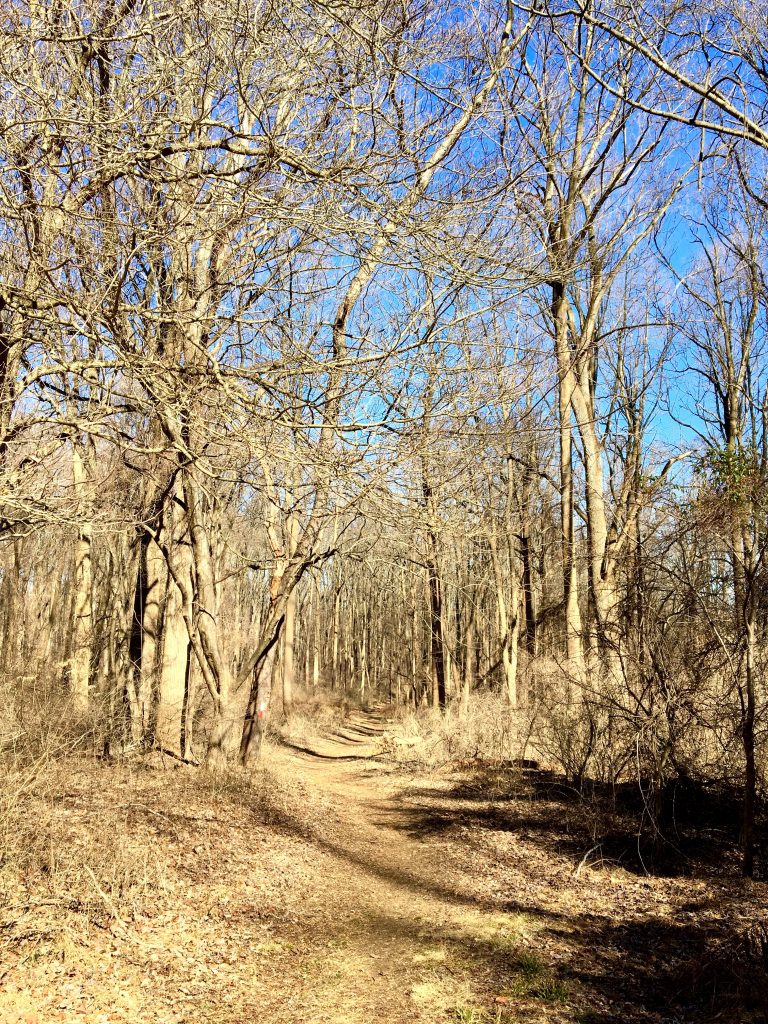 Had it always been there? Probably. I’ve been hiking in Ridley Creek State Park for a solid three years now, ever since I was preparing for my first Camino. I hiked in the park before that, too, but not as consistently. I love that I have a park only 20 minutes from where I live that offers up a nice selection of wooded trails. I can mix and match them so that I’m often walking a slightly different variation than my last hike. There are some hills, there are flat stretches, there’s a creek, there are lots of deer and sometimes I even see fox cubs (well, that only happened once, but it was great).

Lately though, something has been happening on my hikes: I’m getting a little bored. It was bound to happen after three years of steady hiking. I know the park like the back of my hand, I know where I am at any given moment, and I often help people who are stopped on the trail with their heads bent over a map. I like that my hikes are known and predictable, that I can glide along and let my mind wander without worrying that I’m getting off course.

But that feeling of curiosity and exploration has been lacking for awhile now. Often, I’ll be about halfway through my hike and mentally run through the rest of the trail, trying to guess how long it will take me until I arrive back at my car. My eyes aren’t picking up on all of the details because I’ve been walking on the same path a hundred times, maybe more. I’m starting to feel like I’m on auto-pilot when I hike. 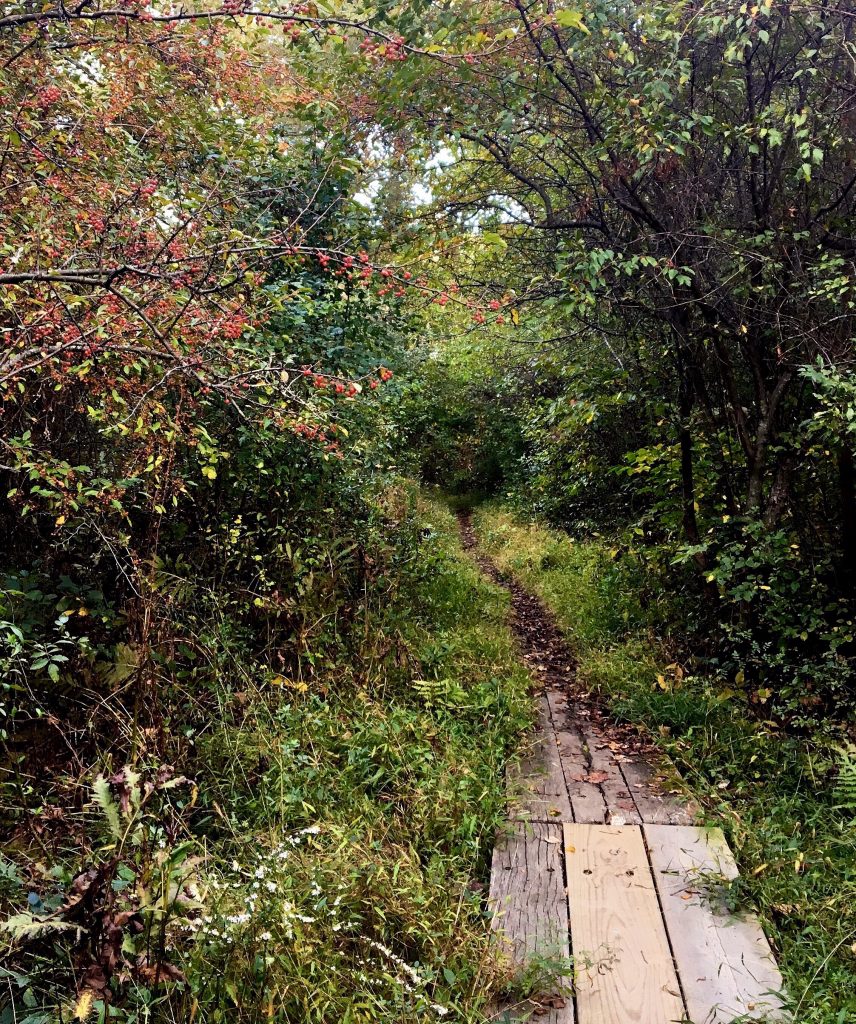 This isn’t a problem, exactly, and hiking is still one of my favorite things to do, even if it’s on a trail that I could hike in my sleep. But this is precisely the wrong time to be getting a little bored with my hikes, because I need to get out to that park now more than ever.

And that’s because I’m in training mode again, for a quick springtime trip to England! I’ll be walking along Hadrian’s Wall, an 84-mile trail that runs from the east coast of England across to the west coast. (Something that delighted me about walking the Camino de Santiago was that I could say I walked across an entire country. If I complete Hadrian’s Way, I’ll be able to say it again).

I’ll write more about this trip in upcoming posts- and certainly when I’m on the trip or just after I return- but for now I just have to say that I’m excited. I really went back and forth over whether I wanted to plan a trip like this: squeeze a walk across a country into my spring break week, at a time of the year when the north of England has lots of potential for cold temperatures and constant rain.

But flight deals were good and one of the deciding factors was that a friend of mine was interested in joining me. This makes it a different kind of experience for me- to not be entirely on my own- but it has its benefits. My friend is an experienced hiker and she mentioned that she likes walking alone, so it’s possible that we might be a good match for something like this.

We’re going to try to fit the walk into 5-days, which should be doable but I suspect that I might go into this thing a little out of shape. The winter hasn’t been a hard one, but I always slow down when the days are short and cold, and I just haven’t been getting outside much.

And this brings us back to hiking in my park, and the secret passageway I discovered last week.

It was a brilliantly warm and sunny day. Everyone had the same idea: to soak up the good weather and go out for a hike. I don’t think I’ve ever seen the trails as crowded as I did last weekend, and I was missing the normal solitude and quiet of my hikes through Ridley Creek. I was walking along on the yellow trail when I turned a corner and saw a family of four ahead of me on the path: parents and two young children and they were laughing and squealing and running around and waving sticks.

“I wish I could put a little distance between us,” I thought to myself.

I slowed down, debating on whether to walk quickly to overtake them, or to stop for a break and let them move ahead. And this was when I glanced down and saw the secret path.

It was clearly a path- small and narrow but leading sharply to the right, away from the yellow trail.

“Maybe I’ll just take this to see where it goes,” I said. I thought that maybe I’d seen this side trail before, but I always figured that it didn’t really lead anywhere. I was in an area of the park that was right at the edge of the trail map, right at the edge of Ridley Creek State Park. There wasn’t supposed to be anything much beyond the boundary of the yellow trail, right?

The side trail was short, maybe only 30 feet, but as soon I cleared a few tall trees I was spit out onto another trail that ran parallel to the one I had just been on. Cleanly painted red and white blazes marked the trees, and the path was wide and well-maintained. 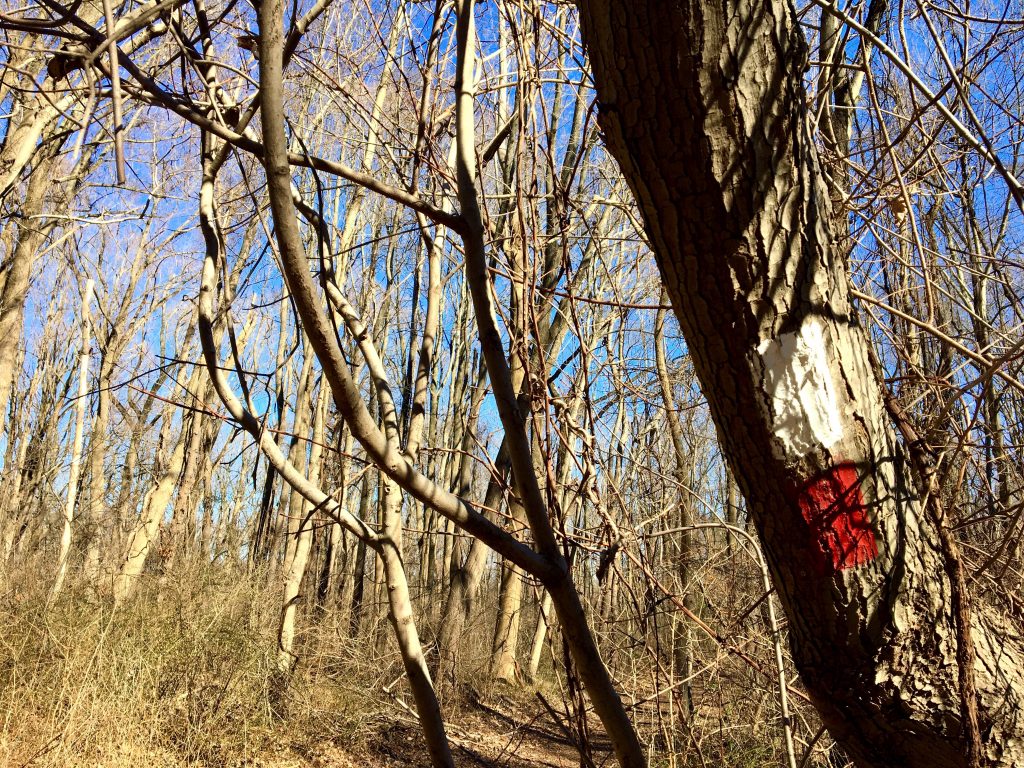 What had I stumbled into? It was like another world over there, some kind of fantasy: a secret garden, a door at the back of a wardrobe that opens onto a magical land.

I wandered down the quiet trail, not another person in sight, and soon the trail split and I saw blue blazes, orange blazes.

For a few minutes I did wonder if I might be going a little crazy, if this alternate-park really did, in fact, exist, if I hadn’t just conjured it up. But then I passed a woman with a dog, and a little white later I saw a faded sign that told me I was hiking on the trails in Tyler Arboretum.

Ahh. The Arboretum has 650-acres of grounds that includes- unbeknownst to me until that day- a network of hiking trails. I’d known that the Arboretum was close to the park, but I never realized that I could get from one into the other. I’m still not sure that I’m supposed to be crossing over to the Arboretum from the park (there’s a fee to get into the grounds of the Arboretum, but I should probably hike down to the Visitor’s Center to find out more), and I’m still learning the lay of the land, how many trails there are, how they all connect. 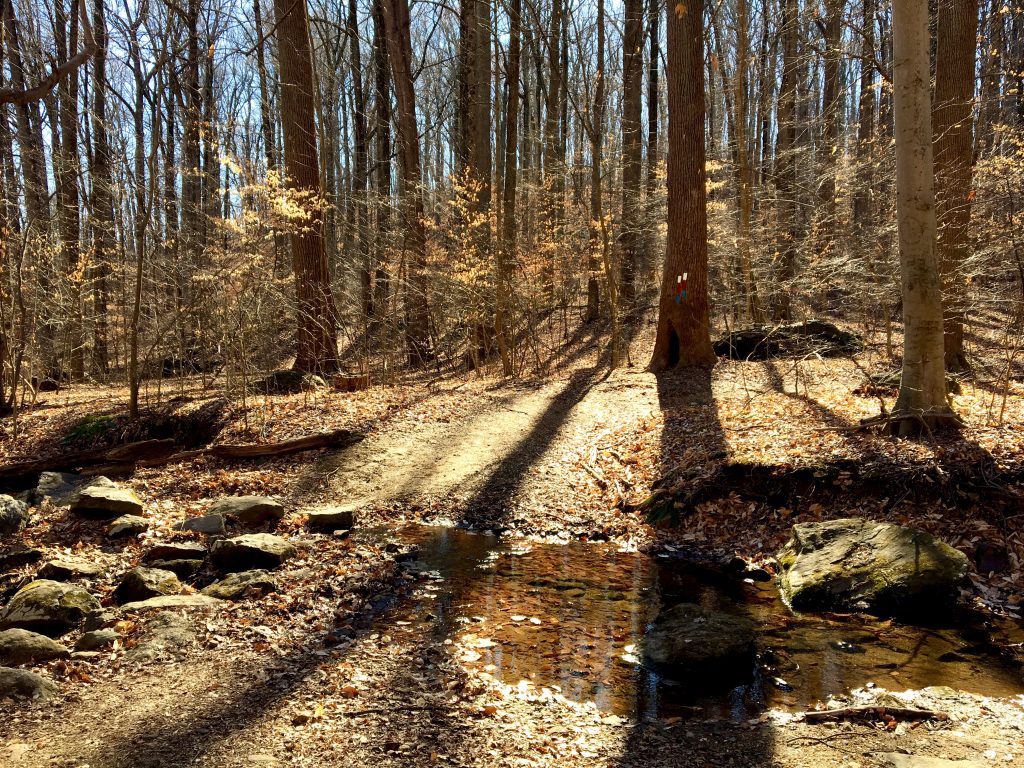 But I have to tell you, discovering this passageway was just what I needed. It’s new and unknown and there’s so much to see and explore. One of the trails is 8-miles long, twice the length of the longest in Ridley Creek, so this is the perfect spot to do some training for my upcoming trip. I have renewed excitement about going out for a hike, it’s a reminder of how important it is to go to new places, discover new paths.

Oh, I can’t wait to discover new paths. Paths close to home, and paths further from home. I have a feeling that this year will be full of them. 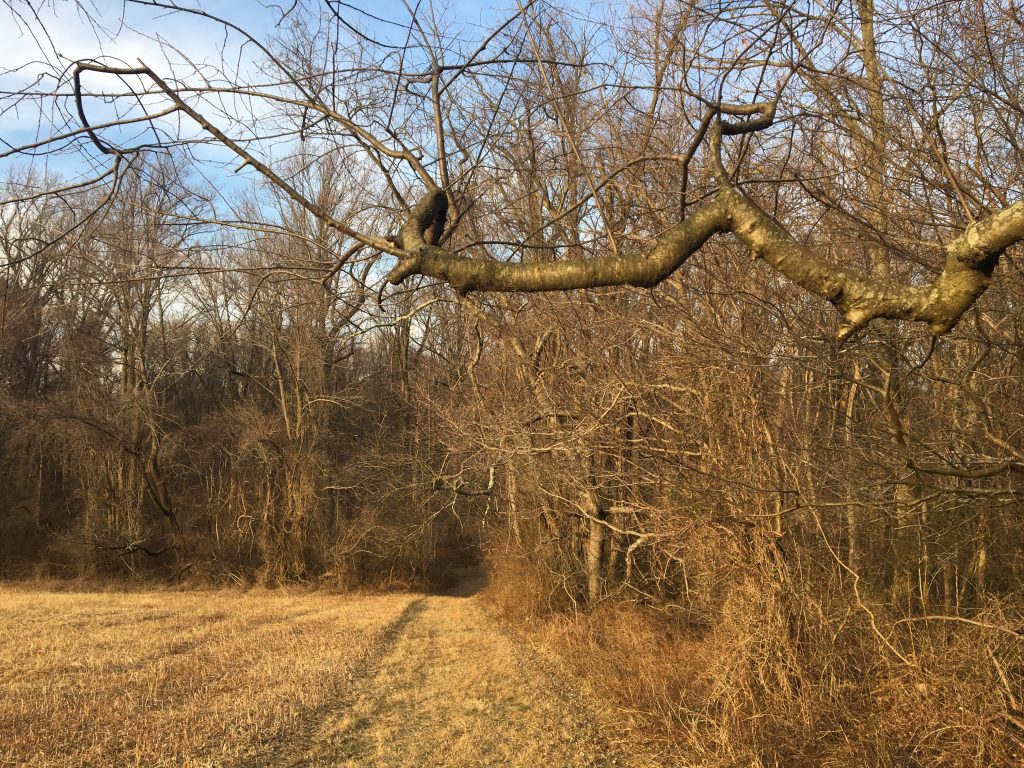 Warning: Illegal string offset 'count' in /home/nadinewa/public_html/wp-content/plugins/instagram-slider-widget/includes/class-wis_instagram_slider.php on line 781
No images found!
Try some other hashtag or username