This is going to be a post entirely about photography. I suppose it’s been a long time coming; even though the whole idea behind this blog was to write, I have always considered the photographs I include here to be a big part of the stories I tell.

I walk, a lot. I also take a lot of photos. And this blog gets all the best photographs. Well, it gets a few of the not-so-great ones as well, but I’m careful to pick my favorites to showcase here. And picking the favorites means sorting through dozens and dozens of not-so-great photos. For every one great photo, there are probably 50 mediocre ones behind it. And this is how I take photos as I travel, as I walk across Spain:  dozens of okay shots, and then one that’s a cut above the rest. 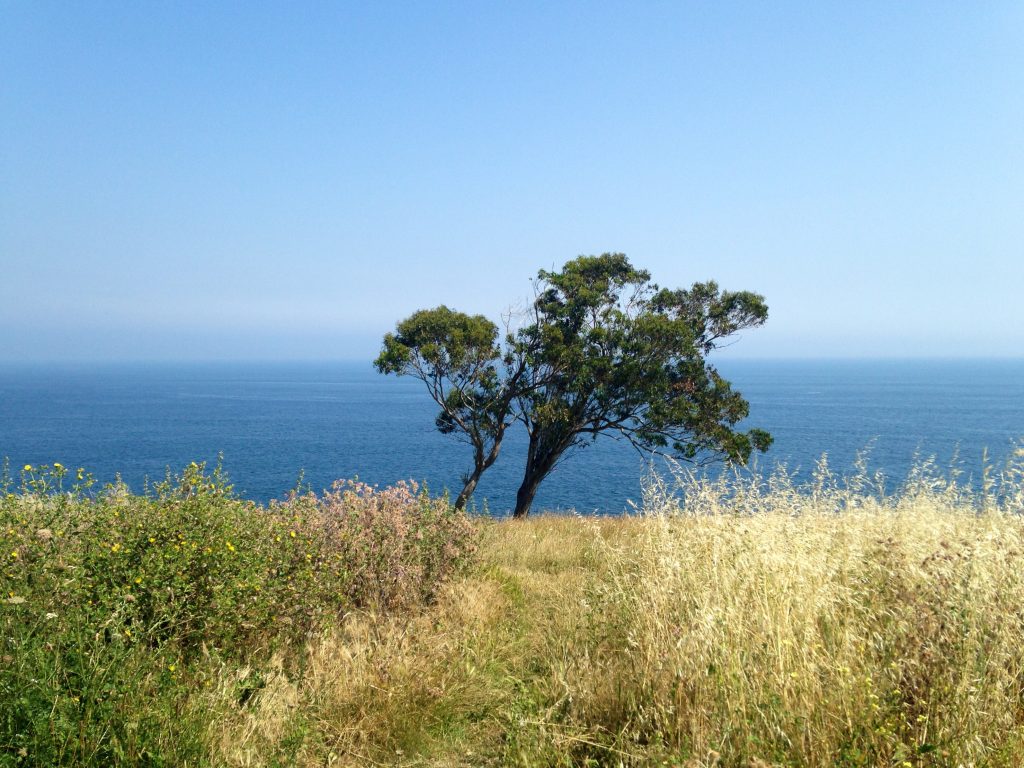 But I love taking the photos, the good ones and the bad ones. Pictures are so much a part of the routine of my travels, and a lot of the time, they are such a big part of the routine of my life. I’ve been holding a camera in my hands for a steady 20 years now, and somewhere along the way, I developed a photographer’s eye. This can mean a lot of things to a lot of different people but here’s what it means to me: dozens of times a day (every single day), I will pause for a fraction of a second and say to myself- “Snap.” I take mental pictures all day long, as if I were holding a camera up to my eye. I sit in an office and talk to teenagers and sometimes I notice the way they are leaning on the arm of a couch and how a gray light is coming in through the window and touching the sleeve of their shirt and the tips of their ears and I think, “Oh, this would be a beautiful photograph.”

I do this all the time. My eyes have become trained to see photographs in the world around me, I see these photographs automatically. I notice light and shade and lines and perspective and shadow and color. 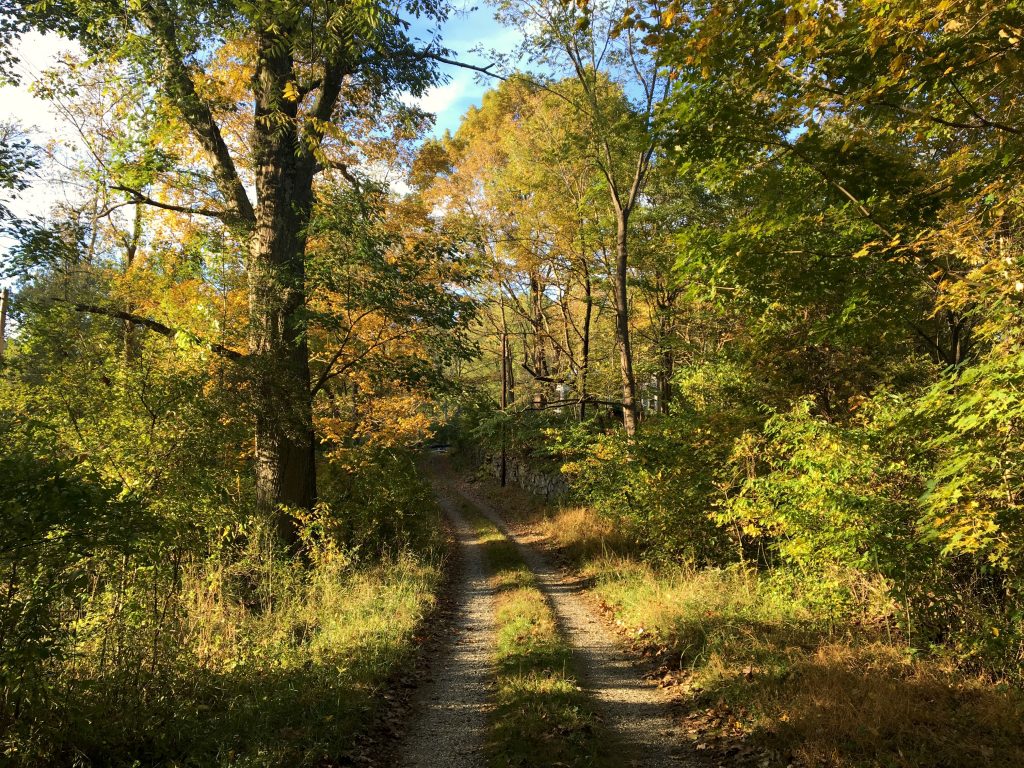 So on all these travels I’ve been doing lately, I have the freedom to whip out a camera whenever I see one of these “mental” pictures. The photos move out of my mind and onto the lens of my camera and I can capture them, just about whenever I want. And how lucky to be walking through some very beautiful places, too! If a day’s walk has taken me longer than it normally does, it is probably not because of a blister or tired legs; more than not, it is because I’ve stopped to take so many photographs.

Walking a Camino in Spain or trekking through Scotland on the West Highland Way means, of course, that I’m carrying all of my things on my back. As I was planning for my first Camino, I seriously considered lugging along my old Pentax SLR and taking dozens of rolls of black and white shots along the way. I love that camera, I’ve had it since I was 15 and it was probably the most difficult packing decision I had to make, to decide to leave it behind.

That’s me, taking photos in France!

What did I bring instead? My iPhone. On the Camino Frances and the Camino del Norte, I also brought along a small digital point-and-shoot that a friend let me borrow, but I rarely used it. The iPhone was just too convenient; it sat in my pocket all day long, and I could easily pull it out, swipe the screen and snap a photo all with one hand. Sometimes I didn’t even need to break my stride!

So the majority of the photos you’ve seen on this blog have been taken with an iPhone, and so far, it’s worked really well for me. But every year as I plan a new trip, I dream about the camera equipment that could be part of my pack. What if I did bring along that old SLR? What if I bought myself a brand new DSLR? What if I researched one of the mirrorless cameras I’ve been hearing so much about? And then, there’s this: cutting-edge technology that’s creating DSLR-like images from a camera the size of a small point-and-shoot. The very best of both worlds!

The camera I’m talking about comes from a company called Light, and if you’re at all interested in photography it’s worth checking out their site. This post I’m writing now, in fact, is part of their #VantagePoint project, where bloggers talk about their favorite locations to shoot and the steps they take to create their best photographs from those locations.

I have to say, I jumped at the chance to write about how I take photographs, and more than bringing awareness to the L16 camera that Light is developing (though I’m always a fan of spreading information that I care about), I’m excited to share some tips with you guys, my readers.

I thought about my favorite places to take photographs and of course my summer treks through Spain were the first things to come to mind. And more specifically, I thought about how I’ve tried to capture shots of ‘the path’. Here is one of my very favorite photos: 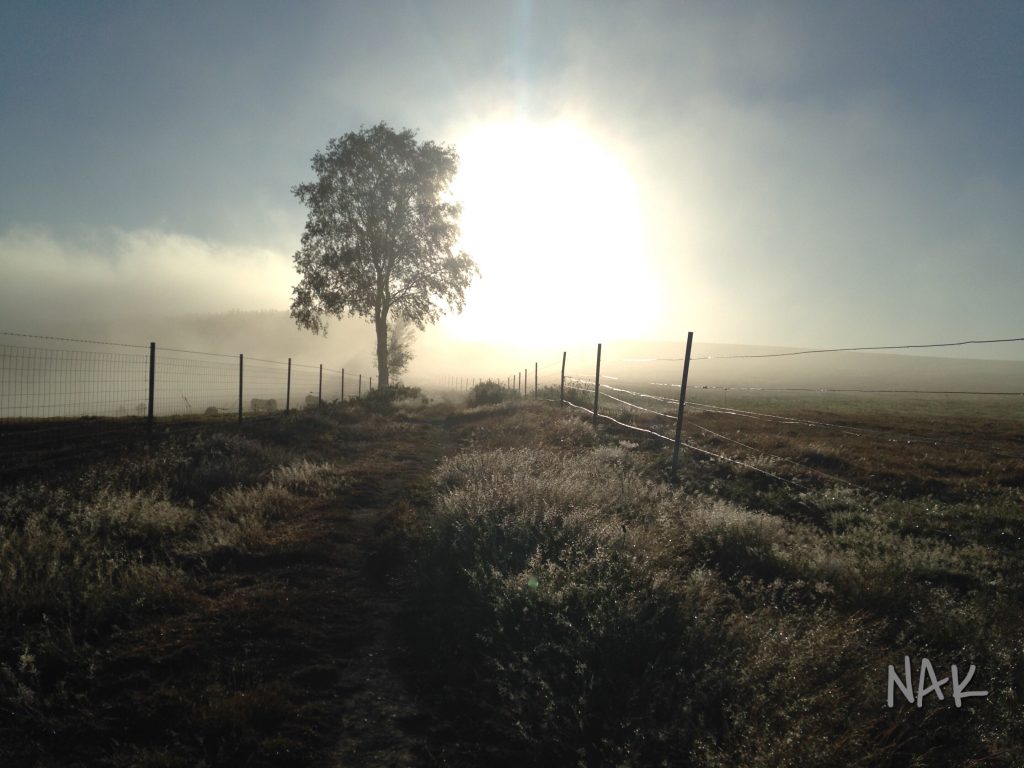 I adore this photo. And I never would have captured it if I didn’t take the time to stop walking, turn around, and look behind me. So this is one of my best tips, actually, when taking photographs: don’t forget to look behind you. Don’t forget to look up or down, either, swing to your right and to your left, turn in circles and keep your eyes opened.

On this particular morning, I was walking through the mountains on the Camino Primitivo, a route that runs through the north of Spain. The morning was a little misty and foggy, a thin layer of dew coated the grass. The air was soft and cool but I could feel the rising sun warming my back and I think it was when I could feel the sun’s warmth that I decided to turn around. The sun was like a fireball in the sky, a giant orb that glowed and burned. I’m sure this was the effect of the clouds and the fog, maybe how the sun was rising over the top of a mountain in the distance. But whatever was happening seemed magical.

I didn’t know if I would be able to get a good photo of it all, however. You know how sometimes you see a beautiful moon in the sky, or a rainbow, or an incredible sunset and you know that no matter what you do, the photo won’t be as good as what you’re seeing with your eye? I worried that this was the case.

I took a string of photographs anyway, to see what I could do. It’s tricky, shooting into the sun, but in this case the fog and the tree were obscuring the sunlight enough that it worked. And lets talk about that tree. I moved down the path, away from the tree, until it was positioned just right in my frame. I took a few steps to the side and then I crouched down until the tree was in the distance, the lines of the fence glinted in the light and I had just enough blue sky for balance. I didn’t want the tree in the exact center of the frame although I suppose that could have worked; but instead, I used both the tree and the glowing sun as my center point.

This was my #VantagePoint. The steps to getting this photograph were, all in all, fairly simple. Keep your eyes open. Turn around and look behind you. Try out different angles and positions. Take several photographs until you get one that works.

I can’t wait to keep traveling and to keep taking photographs. On one of these trips, I may add a new camera and see if I can get even better shots (I have so much to learn) or maybe I’ll just keep using an iPhone but in either case, I know that I’ll continue to take pictures. Lots and lots of pictures.

What kind of camera do you use on your travels? Would you add the L16 to your wishlist? Do you have a favorite place to take photographs?