Scotland- the land of kilts, whiskey, ruddy-faced men and a dish called haggis. Clichés? Sure. But to tell you the truth, I didn’t know much about Scotland before my 5-day walk on the West Highland Way, and I only learned about haggis when I was planning my trip. Vague images from the movie Braveheart swirled through my mind, and I always meant to do research about this place that I was headed to, to at least read up on a little history, a little about the cuisine and the culture and the landmarks, but I didn’t have time. Or maybe I didn’t want to make the time.

One thing I love about traveling is that I’m exploring something that is, to me, completely unknown. And the less I know about a place I’m going to, the more open I am to whatever awaits me. So I think there was part of me that just wanted to arrive in Scotland and… see. Just see what was there, let my experience be my teacher.

What do I know about Scotland, now that I’ve walked about 100 miles through its hills and mountains and moors? Whatever I know, it’s hard to put into words.

Maybe that’s why it’s been taking me so long to write these posts. I left Scotland (and Europe) to fly home on August 20th, a full month ago. I keep thinking about writing, and sometimes I craft my blog posts as I’m out on a hike, thinking that I’ll come straight home and write, but I never do.

It felt easier to write about the Camino, maybe because I’ve done it before. I was never writing about Spain, not really, though parts of the culture and the countryside did seep into my words. But on the Camino I was always writing about the journey- there was always a bigger story that I was telling.

On the West Highland Way? I was walking. I was on a vacation. I was on an adventure. I was alone. I liked being alone. I liked haggis- no, actually, I loved haggis. I had no expectations. I wasn’t really walking towards anything, even if I had an end point. I was happy. I didn’t overthink things. Things were easy. Things were hard. I felt like I belonged there.

I’m sure there’s a story in there, somewhere, and I’m sure I’ll find it as I write about my trek. But while the Camino felt like a pilgrimage, while it’s always felt like a pilgrimage, the West Highland Way felt like a long walk in a beautiful place. I thought that maybe my days in Scotland would be like a continuation of my Spanish Camino, but that wasn’t the case. I was just out for a walk. An incredible, challenging, beautiful walk. 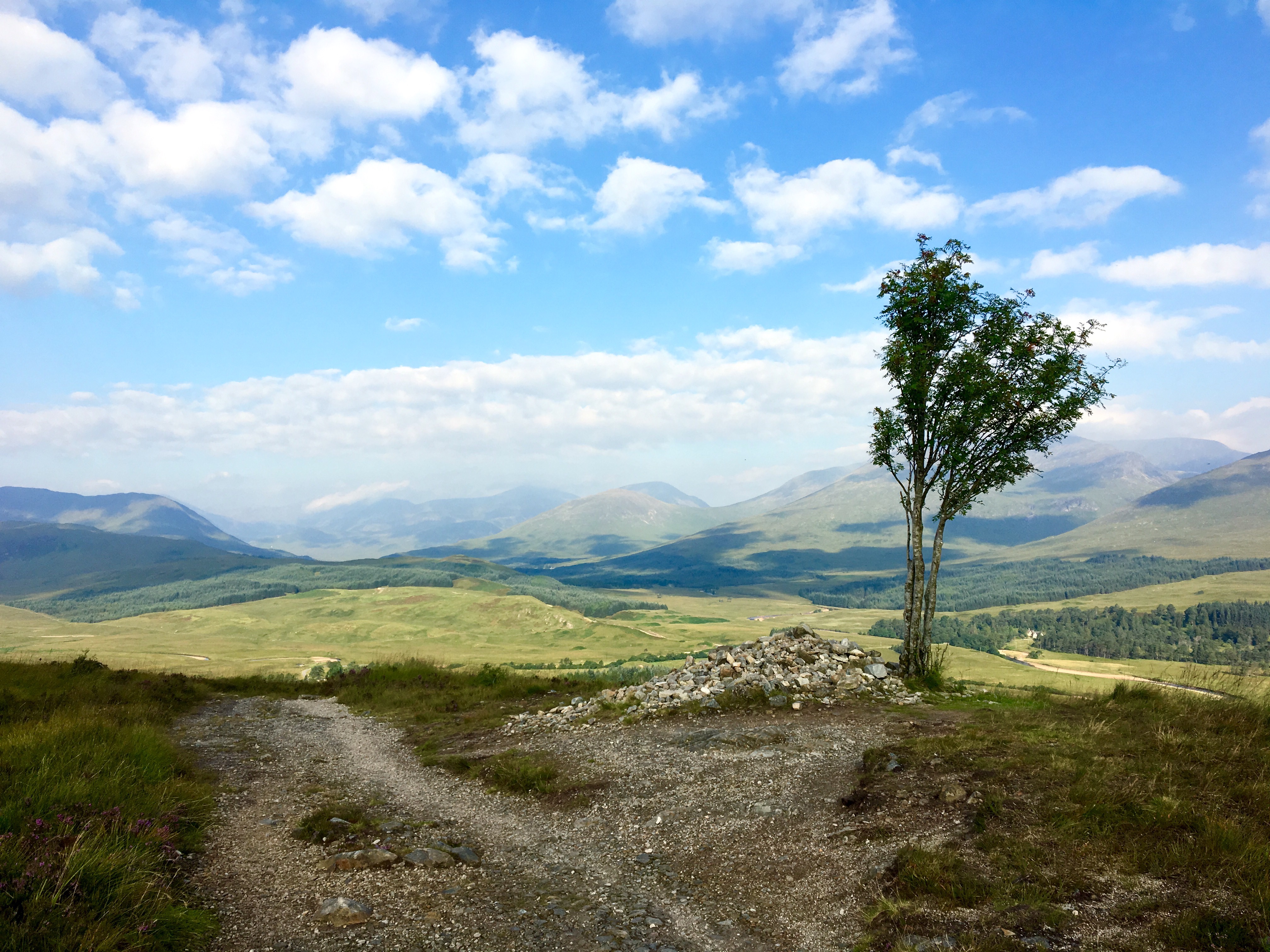 But when I started, I didn’t know what I heading into. All I knew is what I had just finished. My final day in Spain was spent in Santiago: the morning was full of errands: printing out boarding passes and picking up my extra luggage and finding souvenirs and remembering where my favorite corners of the city were. I always meant to write an entire post about this day but that’s going to wait for another time, maybe (most likely) a time that will never come; in any case, the day in Santiago was relaxed and easy and perfect. I retired early to my private room and, with a package of cookies and my West Highland Way guidebook, I crawled into bed.

I spent about an hour reading through the guide, really studying the first two days of the trek. I pulled out a pen and made some notes in the margins- places where I could stop to eat, a good lookout that I didn’t want to miss. But as I continued reading, studying the same words over and over, I began to get a little nervous. It seemed as though on every other page, there was a warning: Do Not Underestimate How Long It Will Take You To Walk. I flipped back, studied the maps, looked at the elevation profiles, and chose to mostly ignore those words. I was an experienced walker, after all. I’d always been fast on the Camino, why would it be any different on a path in Scotland?

But in the back of my mind I knew that I had no idea what I would be walking into. The West Highland Way is not the Camino, and I could feel a tremor of nervousness as I wondered how difficult the terrain would be, what the weather would be like, if I would get lost on the trail.

I flew first to London, then to Scotland the next morning. During the first flight I had an easy and fun two-hour conversation with the pilgrim seated next to me, and as we were about to part ways in the airport in London (where I had a long layover), he gave me a big hug and wished me luck. It felt like a good omen, and one final, last-minute Camino friend.

But when I arrived in Glasgow, I was greeted with gray skies and a steady rain. The tremor of nervousness was back, a little stronger this time. I wasn’t happy walking in the rain for the ten minutes between the train station and my hostel; what was I going to do if I had days of weather like this?

I found my room and my bed (top bunk) and began to arrange my things for the next day. The room was mostly empty, except for two girls sitting together on one of the bunks, their heads bent low over an open book. I moved through the room quietly, trying not to make too much noise, but then I happened to glance out the window and I couldn’t help but gasp.

We were up on the 9th floor, and the large windows of our room overlooked parts of the city and the River Clyde. When I’d arrived at the hostel the view was nothing but gray with wet splashes of rain on the glass, but all at once there were gaps in the clouds and the sun burst through and a strong and solid rainbow was pouring from the sky and landing somewhere that felt just out of reach. 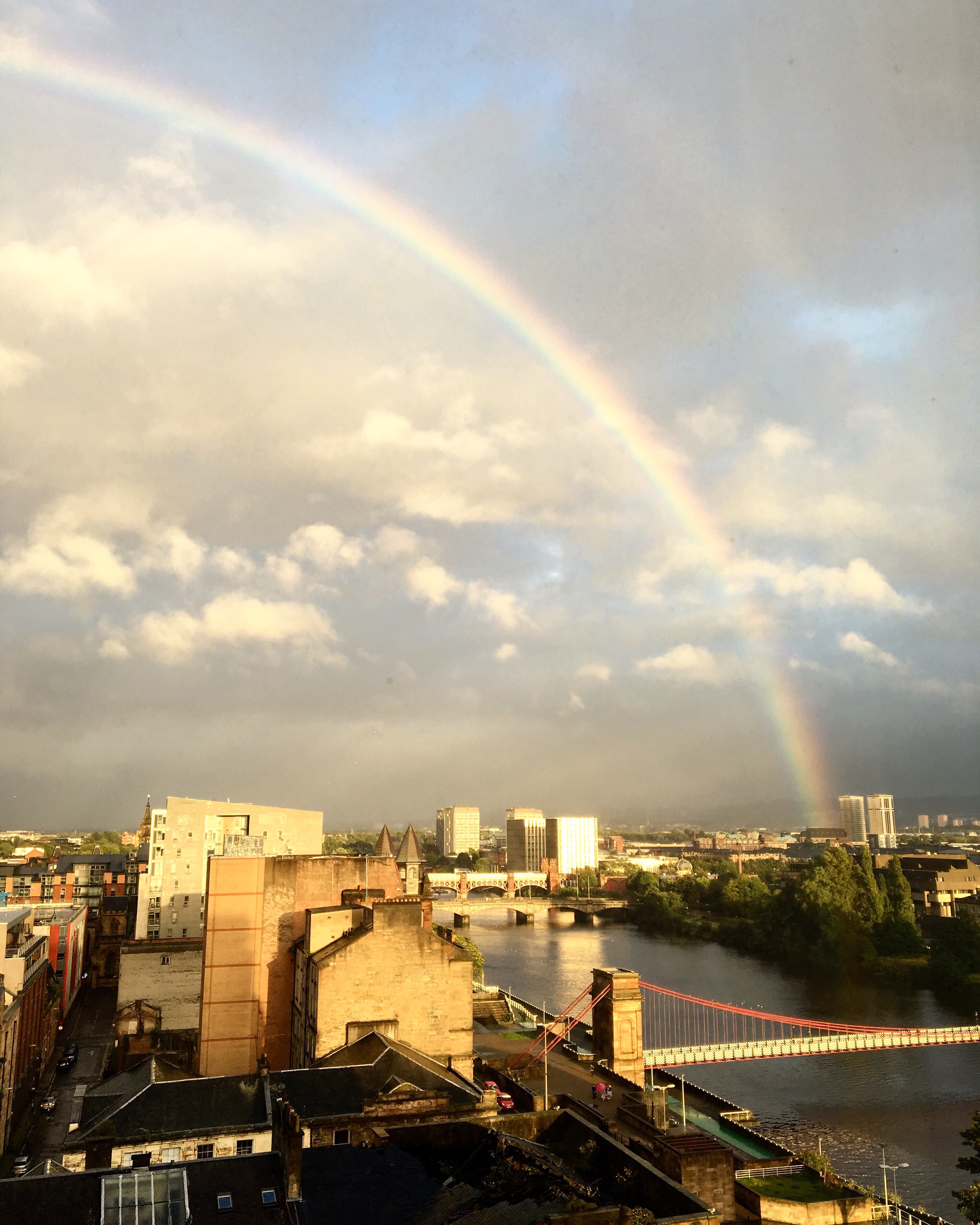 “It’s a rainbow!” I exclaimed, looking over to the two girls. Other than a smile when I had first arrived, we hadn’t said anything to each other. The girls exchanged glances and slowly came over to the window. I was grinning like an idiot because things like this make me happy, it felt like a really good omen for the days ahead.

And when the girls saw the rainbow, all shyness and coolness dropped and the three of us were exclaiming over the views, and crowding around the window to snap photos. Then we started talking, and I found out that they were also planning to walk the West Highland Way. We didn’t move for at least 20 minutes- standing there in front of the window as the rainbow slowly faded, but talking non-stop about the walk and our plans and what to expect.

Their names were Claire and Josephine, they were from the Netherlands and had walked Hadrian’s Wall the year before. “We loved it,” Claire said, “It was hard but we wanted to do something like it again. We’re taking 8 days to walk, how about you?”

I hesitated. When I told them I was going to walk in 5 days, their eyes opened wide and they poured over their guidebook. “But, like, that means that the end of your day 2 is the end of our day 4! Whoooooa.”

The tremor of nervousness roared its ugly head and I can’t really call it a tremor anymore. Was I crazy to be walking the route this fast? The distances were big: 30km, 32km, 31km, 35km, 24km, but when I planned the walk I reasoned that it wasn’t something I hadn’t done before. And after hiking in France and spending two weeks on a Camino, wouldn’t I be in fairly good shape?

But part of my nerves were due to the fact that I was locked in. The 96-mile route is, overall, much more isolated than 100-mile sections on the Camino Frances or the Camino del Norte. There are places to stay in every town that you pass through, but you don’t pass through a dozen in a day. And sometimes the only option in a given town or village is a pricey room in a bed and breakfast or an inn. Plus, because August was peak season for walkers on the West Highland Way, I’d needed to make all my reservations well in advance. My beds were booked; if I wanted to slow down because of fatigue or bad weather, it wasn’t really an option. If I was going to walk the entire route, it was going to have to be in 5 days.

“Good for you,” the girls said. “I think it’s amazing you’re going to walk it that fast.”

I laughed, but the laugh was shaky and thin. “Well, it’s only going to be amazing if I actually do it.”

I went to bed just after the sun went down, tucked under a sheet and a blanket, high up on a top floor of a tall building in the center of Glasgow. My phone was tucked under my pillow, the alarm was set for an early hour. I closed my eyes and shut out all the questions and the worries about what I was about to do, and instead only focused on the good things: I was in a brand new place. I was about to set out on another adventure. Even if was only fleeting, I’d made a few new friends that day. There had been a rainbow. A beautiful rainbow. One way or another, I would be okay.