Have you ever had one of those days, a day that just goes so well that you think you must have been hit with a great big stroke of luck? I’ve had a few of these days, and whenever I find myself in one, I always think of that moment in Harry Potter when he drinks the potion Felix Felicis (otherwise known as ‘Liquid Luck’). Basically, the magical potion makes him lucky and successful in whatever he does. Not just a lucky moment, but an entire lucky day.

My second day on Cumberland Island felt like it was under the magic spell of Felix Felicis. It started with that beautiful sunrise: I’d stumbled out of my tent a little after seven and hoped that I hadn’t missed the sunrise. I walked quickly out to the beach, wandered down to the ocean, and looked up at the horizon. Within seconds, the first sliver of sun appeared. “What good timing!” I thought to myself.

This wasn’t the only good timing of the day, but that comes later. First, I made myself a cup of coffee, ate a pop-tart, loaded up my pack and then set out for an all-day hike of the island. I headed north, starting out on the Parallel Trail (a quiet path under the oaks that runs parallel to the main road) but at the first dune crossing moved over to the beach, where I walked for a mile or two. All along my beach walk, I was keeping my eyes peeled for sea glass (something I’ve been collecting since I was a kid). Somewhere I’d read that fabulous sea glass can be found on the island, but after a few miles of close and careful searching, nothing came up. And I’m a champion sea glass finder! I saw just about everything else- beautiful shells, star fish, what I believe was a washed-up hammerhead shark (!!), and more sand dollars than I could count. 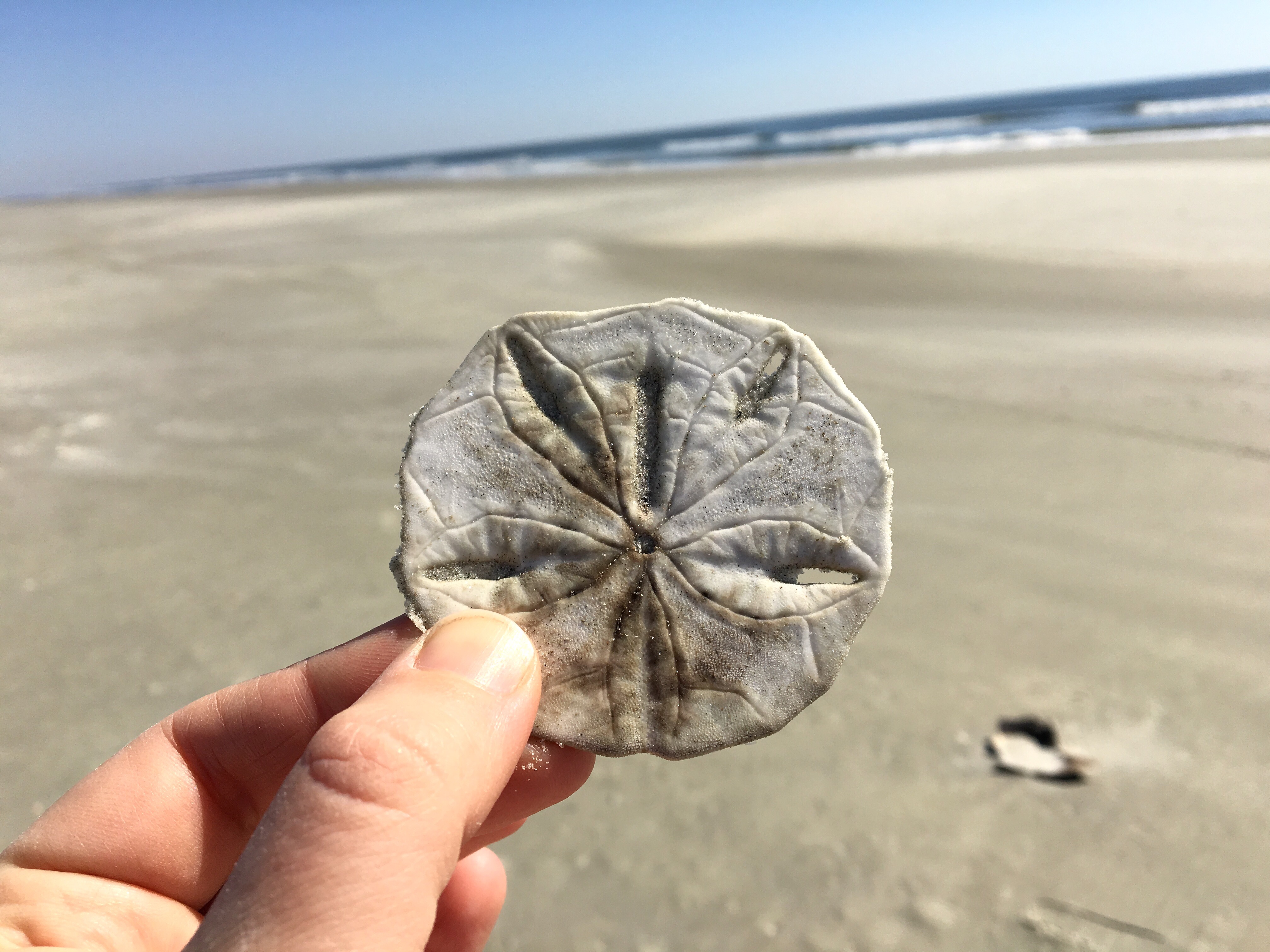 When I finally gave up on my hunt for sea glass, I headed back across the dunes and onto Willow Pond Trail, where I walked east to west across the island. It was somewhere on this trail, in a bright patch of sunlight, when I saw something long and black move quickly in the tall grass. My eyes darted to the movement and the black thing slithered away. I tried to convince myself that it was a big lizard but the shape wasn’t right, the movement wasn’t right. It could only be a snake.

My mind began to play tricks on me as I continued to walk, and I jumped every time the wind blew. There may not be any bears on the island, but there were certainly snakes, and crocodiles, too (the park ranger pointed out a trail that led to a lake where I might be able to spot one, and I gave a fast “no thank you”). But that brief and harmless snake sighting proved to be the most nerve-racking experience during my time on the island; all things considered, that’s not too bad considering it was three days spent in the great wide open. 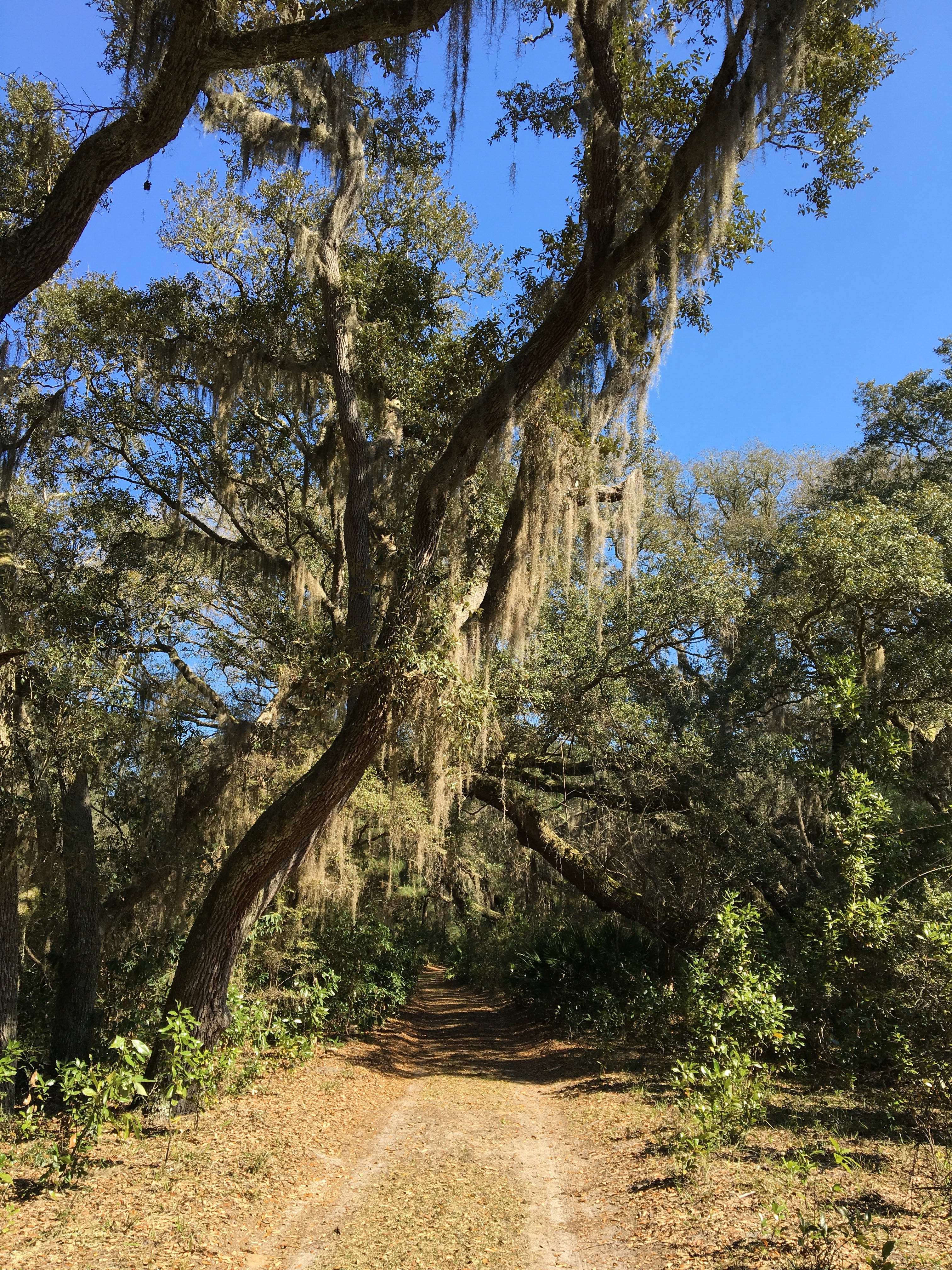 I continued on a network of trails, weaving across and up the island, my destination was Plum Orchard, one of the existing estates that Lucy Carnegie had built for one of her sons. And just before I reached Plum Orchard- when I was still on the trail but felt like I was miles away from anything- I heard another sound, saw something moving, but this time it wasn’t a snake. It was an elderly man on a motorized cart, wearing a wide brimmed hat and a light green polo shirt. I scooted off to the side of the trail to let him pass, but he stopped the cart and began to talk to me.

He seemed happy to learn that I was here for more than a day trip and that I was camping on the island. And then he seemed thrilled to hear that I was from Philadelphia.

“Philadelphia!” his voice lifted. “How in the world did you hear about us?”

We talked for a few more minutes, then I hesitantly asked, “Do you live on the island?”

He smiled before he replied. “No, but I’m part of the family who originally owned the island- the Carnegies- so I come here for a few weeks of the year with my kids and grandkids.”

It was now my turn to be thrilled. He told me that these were the 5 most beautiful days of the year in Georgia, that Plum Orchard was just up the road and I might be able to catch a tour of the property.

He gave me a firm handshake and then motored off down the tail, while I continued to walk. And within a few minutes, Plum Orchard came into view and, in yet another stroke of luck, as I walked up to the sprawling porch I saw that a group had gathered and a tour was just beginning. 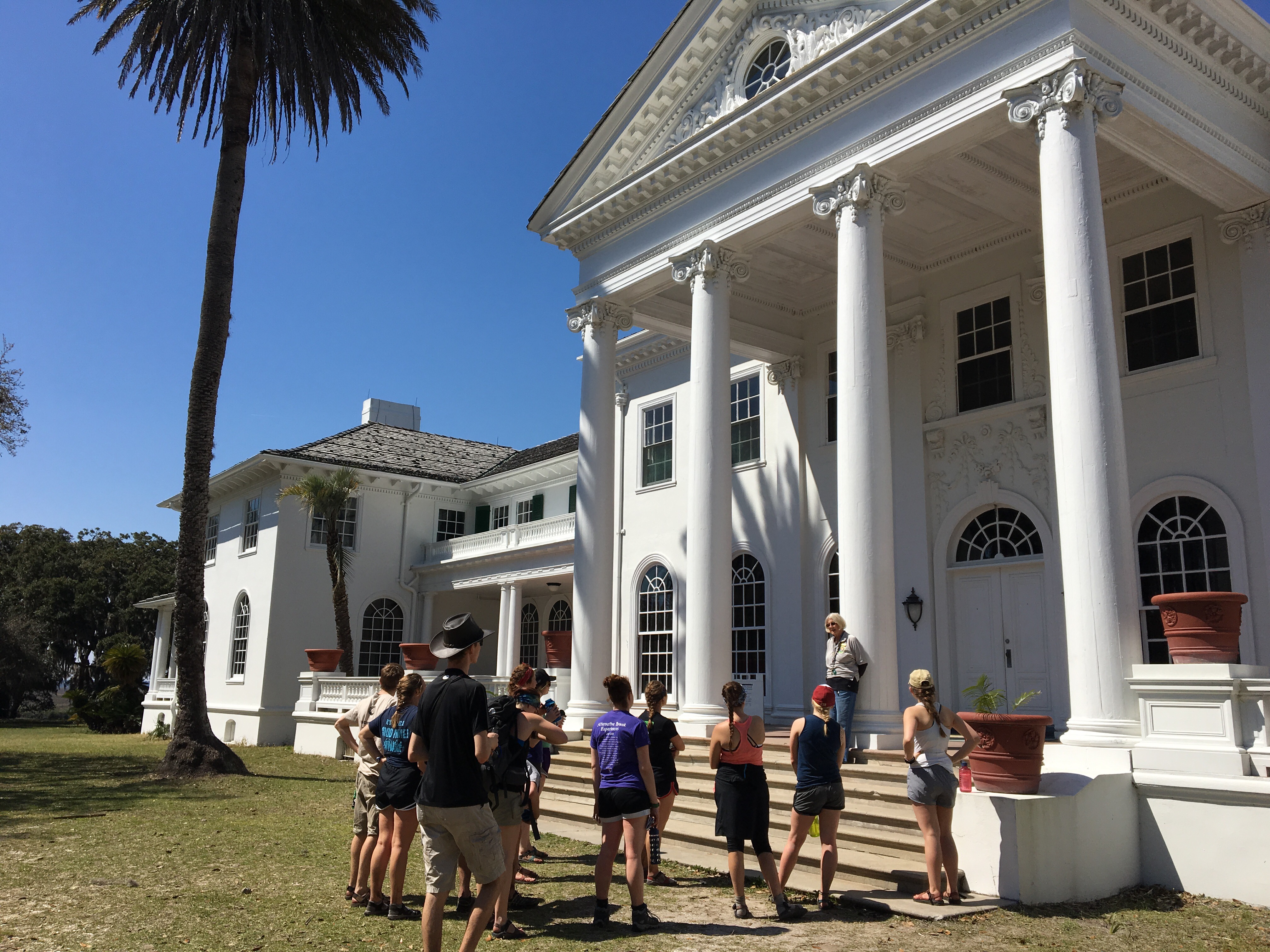 The day had been about as perfect as you could get, but somehow- after breaks on the beach, hunting for sea glass, the tour of Plum Orchard, lunch at a picnic table in the shade- it was 3:30 and I still had to walk back to my campground. Supposedly, Plum Orchard was only 7 miles from SeaCamp, but I nearly doubled that distance with the winding, topsy-turvy route I’d taken on the way up. So I chose a more direct path on the way back, walking mostly on the Main Road (one more bit of almost incredible luck: just as I was wishing that there could be a side trail to take that would split up my time on the main road, a side trail appeared. What are the odds? I think it was called the Old River Trail, but it wasn’t on either of my maps, and by the look of the signposts, it seemed rather new. So I took it and it while it may have added just a bit of distance, it ran mostly parallel to the main road and was beautiful). 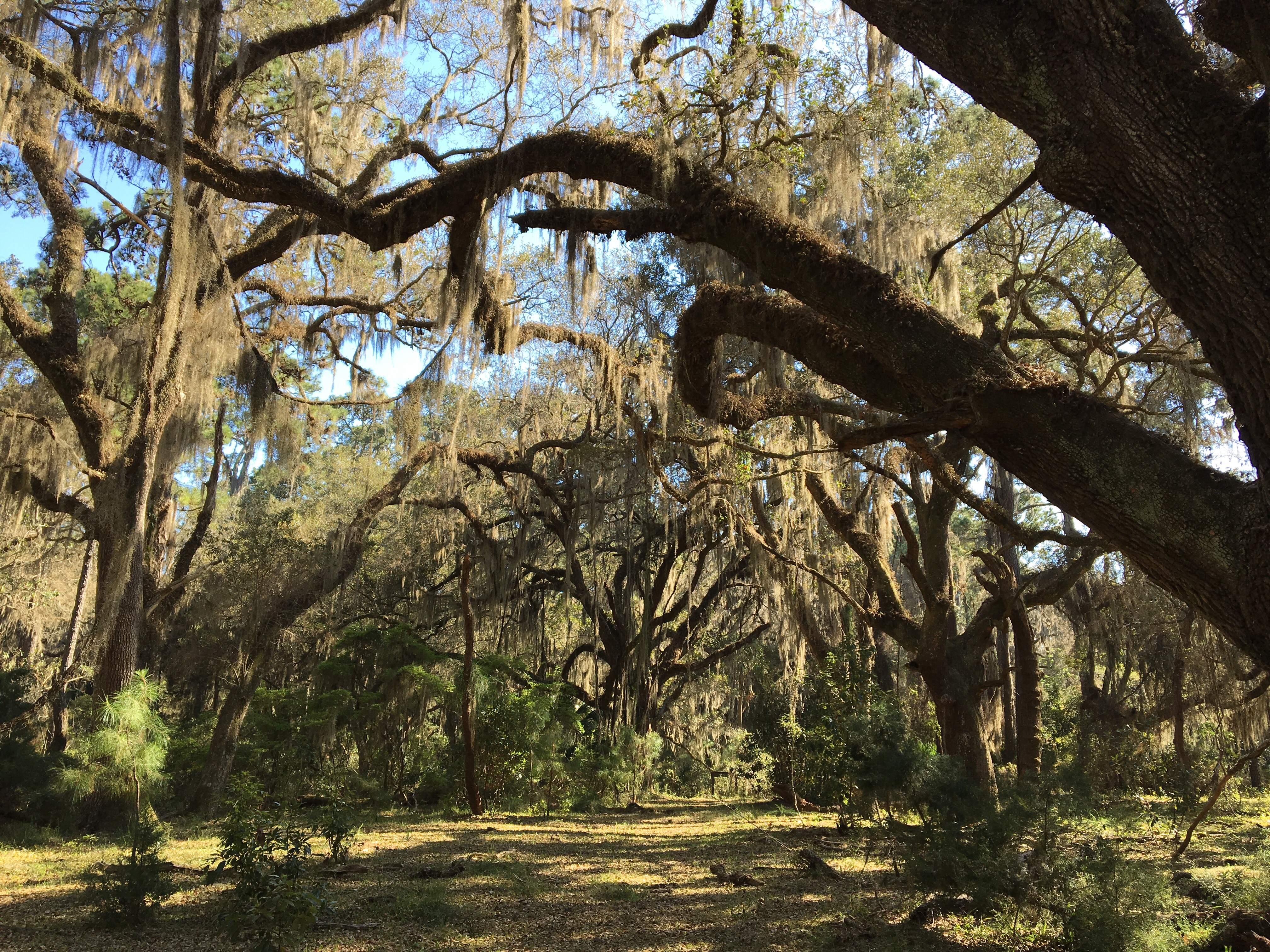 Despite the island being almost totally flat, the last few miles of my walk were exhausting. By the end of the day my phone was reporting that I had walked 28 miles. 28 miles!! When had that happened? I stumbled into my camp and nixed my plans of going back to the dock to watch the sunset. I ate dinner, crawled into my tent, read for a bit and was out by 9pm. And, thanks to the hours of fresh air and walking, I slept like a log- totally undisturbed by the lumpy ground or the rustling in the palmettos.

What a fine and lucky day.