I’m still sitting here in this bar in Santillana del Mar, finishing a beer (what?? Not wine? Maybe I had my fill yesterday, and needed a change. But this, too, has been something that’s a bit different for me on this Camino: normally I don’t really choose beer if wine is available, and last year I think I had one glass of beer on my entire Camino. Not the case this year).

Anyway, this town is amazing, but also super, super touristy. I arrived here with Jenna and Guillemette and we stood around, trying to find the albergue, and two women came over and asked if they could take out picture. “Pilgrims, they’re real pilgrims!” I sort of felt like I was part of the tourist attraction: this is a medieval village with cobblestoned streets, narrow and winding. Even though I’m a modern-day pilgrim, people stared at me like I was from another world (but there was part of me that liked this. This pilgrimage to Santiago IS medieval, it’s modern but it’s also from another time, and I kind of felt like I represented that. In some ways, I feel like I belong in this town more than the tourists do, even though that’s probably not true at all).

I said goodbye to Nicole this morning, and it wasn’t easy. Nicole had planned to walk the Norte in April but broke her foot just before, so she delayed her pilgrimage by a few months. She knew that the decision to walk was a bit risky and that she might not be able to make it all the way to Santiago, and for the past couple of days her foot started to hurt. Last night she told me that she needed to stop walking, and she was pretty upset about it (but also handled it beautifully). In any case, even though I felt like we’d only really become close in the last few days (and even though I only met her a week ago), she already feels like a close friend. It doesn’t seen right that I’m continuing to Santiago and she’s not. And it reminded me a little of saying goodbye to Mirra, last year: a strong hug in the morning, holding back a few tears, wishing that my Camino friend could continue all the way to Santiago with me.

But I walked on, because that’s the Camino: you make these beautiful connections, and then you walk away. Or they walk away. Sometimes you see people again, sometimes you never see them again. I had a lot of practice with this last year but I have to say- it doesn’t get easier. I still wish that I could take all the people I’ve met on these journeys and carry them with me to Santiago, I wish I could fill the cathedral with all of them, to sit at the end with them. Them, and maybe everyone I’ve ever known and loved in my life. Saying goodbye, losing people, it’s hard. I still wish that I could hold on.

The walk today wasn’t great- there has been a lot of pavement walking in the past few days, and an entire day of it today. I walked a lot of the morning with Jenna (from New York), and together we navigated the short cuts explained to us by Nieves last night.

We had a decision to make at the train tracks over a bridge: hop on the train in Boo and take it to Mogro (the safer option), or risk walking on the narrow footpath next to the tracks. This option was explained to us multiple times: in Guemes, in Santa Cruz, by a local just before the bridge. Everyone said this: there is plenty of room to walk, and it is safe if you are not foolish.

I don’t really like walking along train tracks, and I don’t like risk, at all. If I had been alone today, I would have taken the train. But I approached the bridge with Jenna, and a German man was just ahead of us. And as we looked at the bridge and debated crossing it, a train appeared in the distance. We let it pass by, and knew that we had 30 minutes until the next train would arrive. Crossing the bridge took about 2 or 3 minutes, and I wasn’t worried for a second (well, maybe just a bit. I walked fast and was kind of relieved when I made it to the other end).

So that was the adventure of the day: as Christine and I have been saying, everyday brings something new.

After the excitement of the bridge crossing, the day was just tough. And I continue to think: this is definitely a different kind of Camino for me. The actual walking wasn’t hard- it was all on pavement but mostly flat. What got us today was the heat. It’s been hot here, but today was something different. I don’t know the exact temperature, but it was stifling by 9:30. After stopping for a coke with Jenna and running into Guillemette and Carlos, we all walked for about 5 kilometers and stopped at the first bar we came across. We all sort of dragged ourselves in and got bottles of water, and let me say- that cold water was the best thing I’d ever tasted. We continued on and I wasn’t having any fun, just walking until I could get to my destination.

But I’m here and before finding an albergue, Jenna, Carlos, Guillemette and I had a long lunch in a shaded courtyard. We found an “albergue” (it has a couple rooms for pilgrims and then rooms for everyone else), there are 4 of us in the room right now and it only sleeps 6. We have our own bathroom and a little terrace and wi-fi so it sort of feels luxurious. I met two more Austrians out on the terrace (Austrians are quickly becoming my favorite pilgrims on this Camino!), and I spent an hour wandering through the town, taking photos.

Carlos, Guillemette and I had a small dinner together- just bread, wine and a cheese plate- and we talked about the Camino and what brings us here, who we were before and who we might hope to be after. We stayed outside late and if it had been a clear night I might have been able to see the stars. 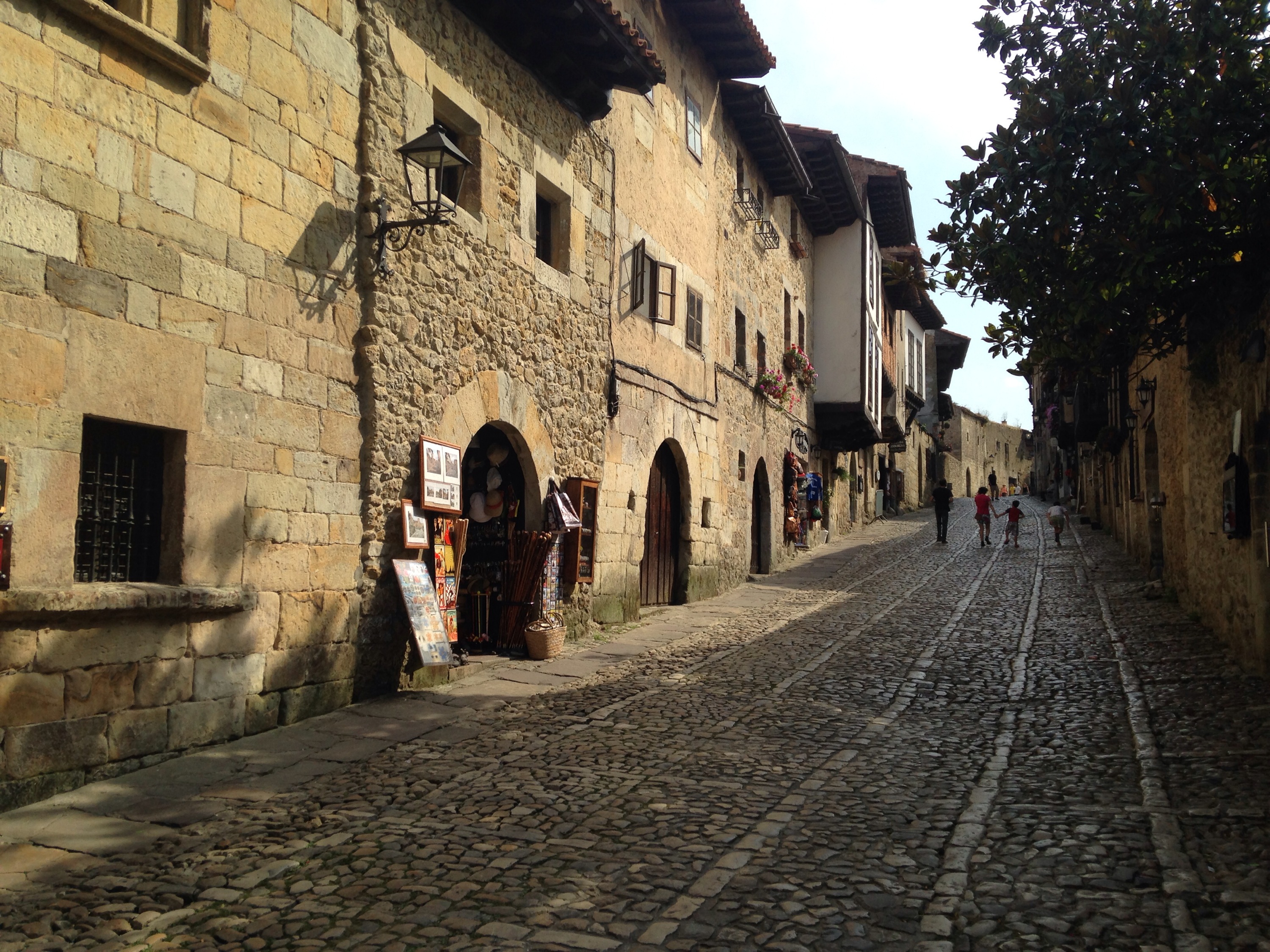