This trip feels surreal. It’s like I’ve been suddenly plucked out of normal life and placed into an alternate reality. I’ve been walking for three days- so this is still, supposedly, new- but it feels natural. A different place and different people and different things, but I feel like it fits.

I think it might be hard to articulate this Camino experience. I’ve read so many accounts of others who have walked, I’ve talked to friends who have done this, I’ve heard how incredible it is. But I didn’t expect that after three days, I’d be sitting in a beautiful cafe in Pamplona, eating tapas and drinking wine with three new friends: another American, a guy from the Basque region of Spain, a guy from South Korea. Or that before going out in Pamplona, I’d wander into the courtyard of the albergue to look for Mira, and then be drinking a beer with a guy from New Zealand, who it turns out is one of a duo who did the first day of the Camino barefoot. And then I met his mom and his 12 year old brother; they’re doing the Camino as a family.

So far, I’m liking the Camino. My feet are feeling good, my legs are feeling good, though I was definitely more tired than the past few days, but I think’s more from lack of sleep than anything else. My hair, on the other hand, feels disgusting. Washing it with a bar of soap isn’t fun. And I sort of wish I had brought a shirt to change into at night, or maybe something separate to sleep in. But those are small complaints. Everything else- the important stuff- is good.

I wrote a long blog post last night but I lost it, and so far the wi-fi hasn’t been great. But I’ve been wanting to write about and capture this experience as much as I can… while also going out and experiencing everything this Camino has to offer. And trying to get enough sleep. But mostly, I’m focused on enjoying the experience.

It’s almost 11pm and that’s late for a Camino night, but I was out with Ibai and Ji-Woo walking around Pamplona, taking in the pre-running of the bulls festivities. We’re staying in a large albergue, this building was a church, and there are long rows of bunk beds running down the sides of the building. There are six beds in my cluster- I walked into Pamplona with Ibai and he got the bottom bunk, but was very kind and offered it to me. Between the other four occupants of the beds: right now one is listening to music that we can all hear, a father and daughter are loudly whispering to each other, and a man occasionally snores loudly. There are footsteps above and voices echoing and cell phones beeping and hall lights on… here’s hoping for at least three hours of sleep tonight.

I slept pretty well last night- I was in a municipal albergue in Zubiri, pretty bare bones, rickety bunk beds (top bunk), but no snorers. I’d also had a few glasses of wine and maybe that helped; after dinner with Mira and an Australian and Texan (who’d met last month on an archaeological dig in Jordan, people here have such great stories),I went over to a bar to find Steve and Peg and watch some of the World Cup match. I’d met Steve and Peg on the first day in Bayonne, waiting for the second bus (and, as it turns out, most of the people I’ve gotten to know are the ones who didn’t push their way onto the first bus). As I talked to them last night, I found out that they have four kids around my age, and that Peg also does school counseling. After the game and before I walked back to my albergue, Peg gave me a big hug and said, “Thank you so much for finding us tonight, being with you reminded me of home.” I had to assure them three times that I could make it to my albergue okay, but it was nice to know that there were people looking out for me.

The people I’ve met have been great, but I’m here to walk, and that’s been incredible. I’ve only walked three days so maybe it’s too early to say how much I love this… but I do. I love waking up and loading my pack and setting off for who knows where. I glance at the guidebook and maps, but all I really know for sure is that I’m headed west, to Santiago. It’s easy to just follow the arrows and go, not worry about where you are because it’s hard to lose your way. There is purpose and direction in the walking, and all along are beautiful sites and small villages and dogs and horses and sheep and kittens.

Uploading photos has been hard, and I already have hundreds. Maybe this time I’ll be able to share a few… 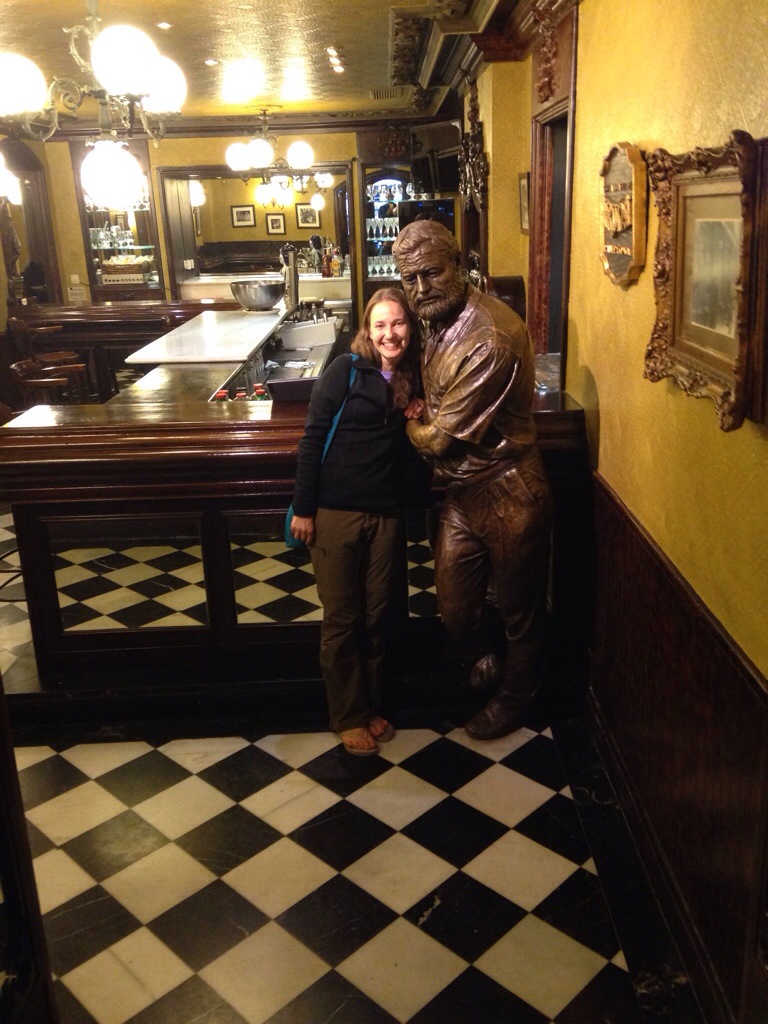 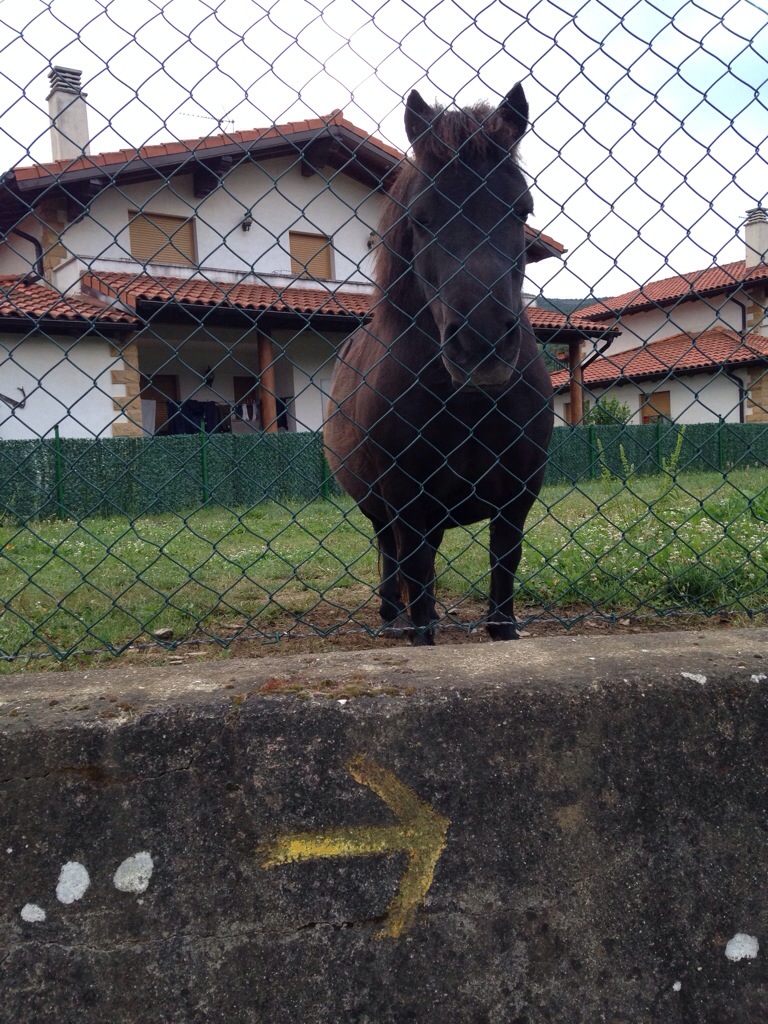 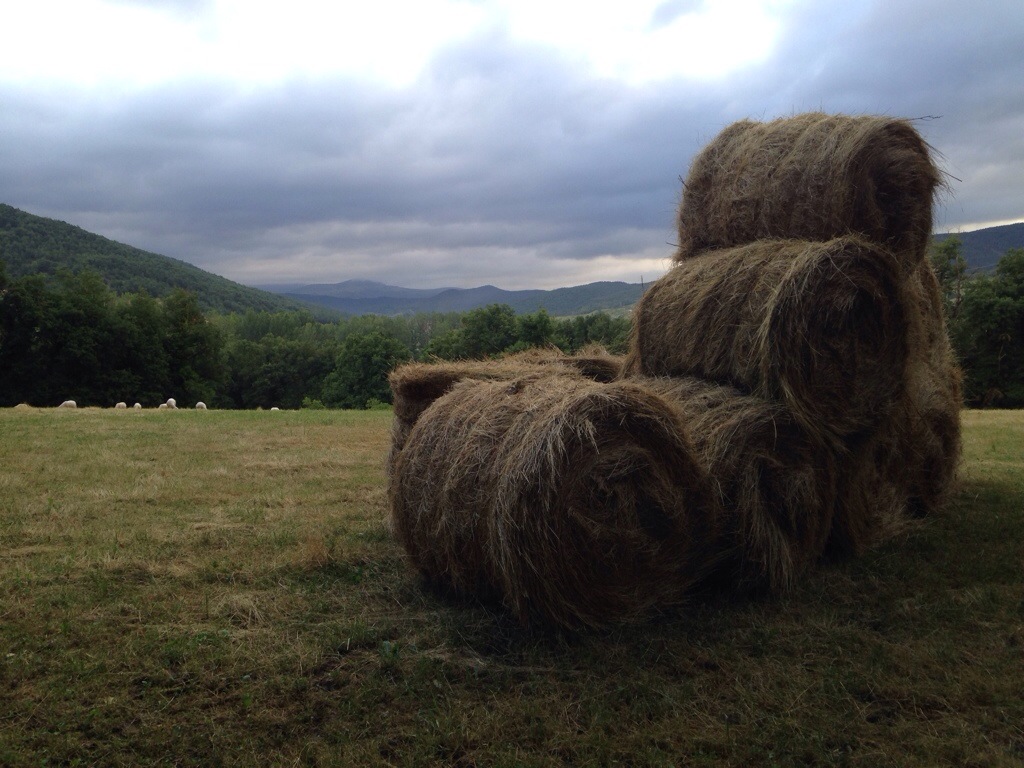