Once again I’m not sure exactly where I am. Somewhere in Galicia now, about 4km before Triacastela. Not having a guidebook, a friend or group to always walk with, or any set plans can be a wonderful thing: I usually start my day with a general idea of where I might end up (I have an outline of stages that Mirra tore out of her guidebook to give me before she left, and sometimes I ask to look at guidebooks that others carry, to give me an idea of what the next few days will be like). But the beauty of not having a set plan is that I can go wherever I want, whenever I want. I wanted to do a few short days, and thought I would stop in a town about 3km back, but when I passed the albergue I saw a group of about 40 teenagers talking and laughing in the courtyard, and I didn’t even break my stride; I walked right past and decided to head to Triacastela, where most of my friends are.

But I’m here instead, in a small village, sitting at a table outside the bar, in a little grassy area with chickens running around and a dog sleeping under a chair, a small apple tree to my right and a mountain view directly ahead. When I saw this space I doubled back to the albergue and checked-in. I’ll catch up to my friends eventually, maybe even tomorrow. For now, like I did a few days ago, I’m craving peace and quiet.

I am constantly thinking about the balance between time that I need for myself, and time that I want and need to spend with others. Three days ago I was feeling a bit down, and just a bit lonely. I’d chosen to go off on my own and separate myself from most of the people that I knew, and I think that experience was good for me, despite feeling lonely.

But all at once, things changed (and this is one of the greatest things about the Camino). I’d written my last blog post when I was in Rabanal, where I thought I didn’t know a soul. I went to hear the monks sing a vespers service in the village’s small church, and when I came out of the church I felt relaxed and settled. As I walked into my albergue I saw a group of people eating at a picnic table, and a girl looked over to me. It was Saskia, an American who I’d met at some point during my first week here, and continued to see every 3-4 days throughout the walk. The people she was with offered me the leftovers of their pasta dinner, and then I made some lentils and opened the small bottle of wine I’d found in the supermercado (along with the wine, I’d found earbuds for 2 euro, which was perfect since I’d lost mine a few days before. The small shop in Rabanal came through in a big way!).

So I had a simple, delicious dinner that night, and a good, long heart to heart with Saskia.

And I felt revived heading into the next day. More calm and settled about the time I spend alone, but also more aware of the time when I want to be with others.

Maybe at some point I’ll catch up and share more stories. But for now, I want to share my nearly perfect Camino morning, and what was overall a really great Camino day.

I woke up this morning at 5:45, after a solid 8 hours of sleep. This has never, ever happened on my Camino, and poor sleeping has left me pretty exhausted. But last night was wonderful, I was in a small, quiet albergue, on a bottom bunk with no one above me and no snorers in the room.

I packed my things and left while everyone else continued to sleep, and as I made my way out of the village I ran into John, a Scottish man in his 60’s. I’d met him a few days before, and we spoke for a minute about the 8km climb we had ahead of us, and then I moved on ahead (later, I saw Joe and Adele, who told me they’d run into John later in the day, and he called me a ‘greyhound’ because of how fast I started climbing up the mountain. I certainly wouldn’t call myself a greyhound, but I DO walk fast, and probably faster after a good night’s sleep).

I climbed 4km and after yesterday’s extremely challenging climb (along with 6 other pilgrims took an alternate route called Dragonte which involved three mountains; we were the only 7 pilgrims on the route that day), I was able to climb fairly easily. Just as I was really tiring, I reached a town and, like a mirage, I saw an open bar (at 7:20am!). So I sat and enjoyed a cafe con leche and a croissant, and then climbed the next 4km to O’Cebreiro and I felt like I was flying.

It helps that I wasn’t carrying any food in my pack. Often I have at least one can of tuna (and at some point on this Camino I was walking around for 4 days with three cans of tuna fish), but I usually have more. The other day I was noticing how heavy my pack felt, and I mentally scrolled through what I had shoved into my bag that morning: half a baguette, a big chunk of cheese, a hard boiled egg, two peaches, an apple, a bunch of cherries, a tomato, two cans of tuna, and a bag of candy. Way too much, and I’m amazed I could fit it all into my pack. But at this point on my Camino, walking for over three weeks, I can handle carrying a lot.

But this morning I felt light, and it was probably because I didn’t have an extra 5 pounds of food in my bag. On the way to O’Cebreiro I passed a small town where I saw the Italian group outside having breakfast. They cheered when they saw me and Carol stood up to give me a hug. Laura, the 12 year old, asked where I was staying that night, and said she hoped it was the same town where she would be.

I continued my walk, meeting a man from Chile who was walking very slowly, but smiling constantly. I made it to O’Cebreiro, stopped for another cafe con leche and tortilla, then ran into Ibai on my way out of town. We accidentally walked a kilometer or two on the main road, realized we went the wrong way, then doubled back to find the natural track.

Today’s walk was breathtaking. I crossed into Galicia, and I’ve heard that this is the nicest part of the Camino, and from today, I can believe it. The weather was beautiful, there were near constant mountain and valley views, there were cows and chickens and horses and dogs everywhere. Quaint villages, so much green, and as the day progressed I had a lot of time to walk alone.

But I also met several new people today and had some great conversations, and it reminds me of how incredible this experience is. Geraldine and David have been walking since St Jean but today was the first day I encountered them; Anti started her Camino today and I met her minutes into her walk.

I walked with and passed by friends I’ve gotten to know over the last several weeks, I’ve had moments of connections with people I’d only just met, and I had time to myself to enjoy the beauty of where I am and how magical this experience has been.

And now I’m in this tiny town with a cold drink and the sun slowly setting into the mountains. I’ll have dinner soon with some new friends, and tomorrow I’ll wake up and walk… somewhere. About 6 days until I reach Santiago, and I’m trying to soak up as much of this experience as I can. 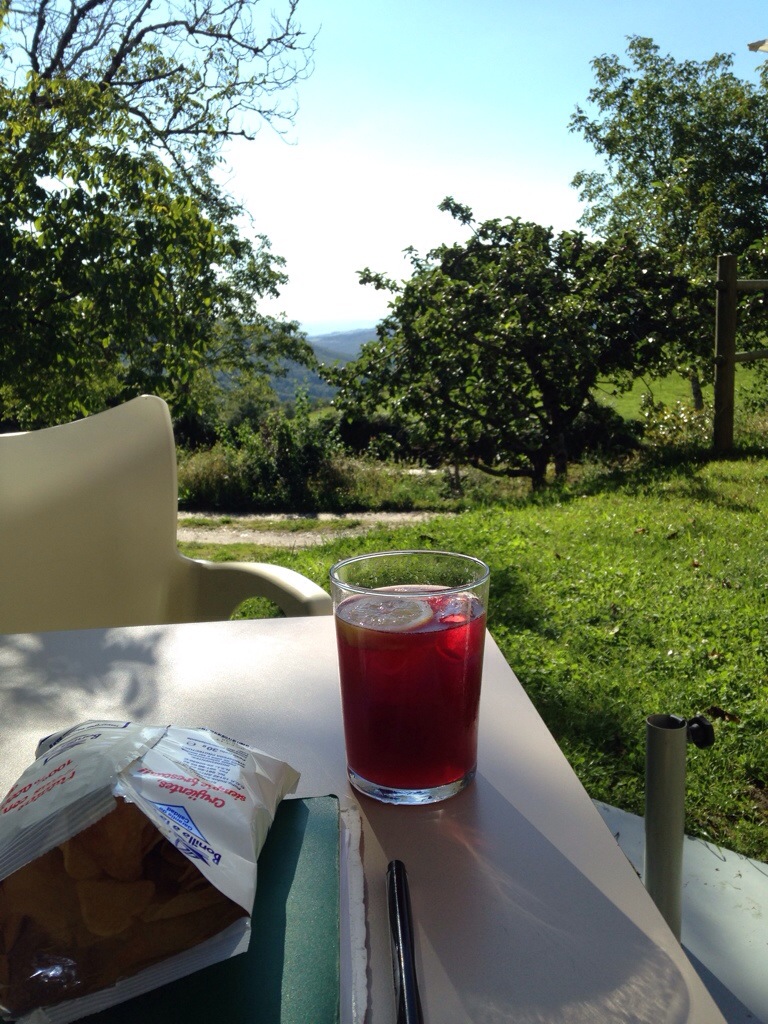 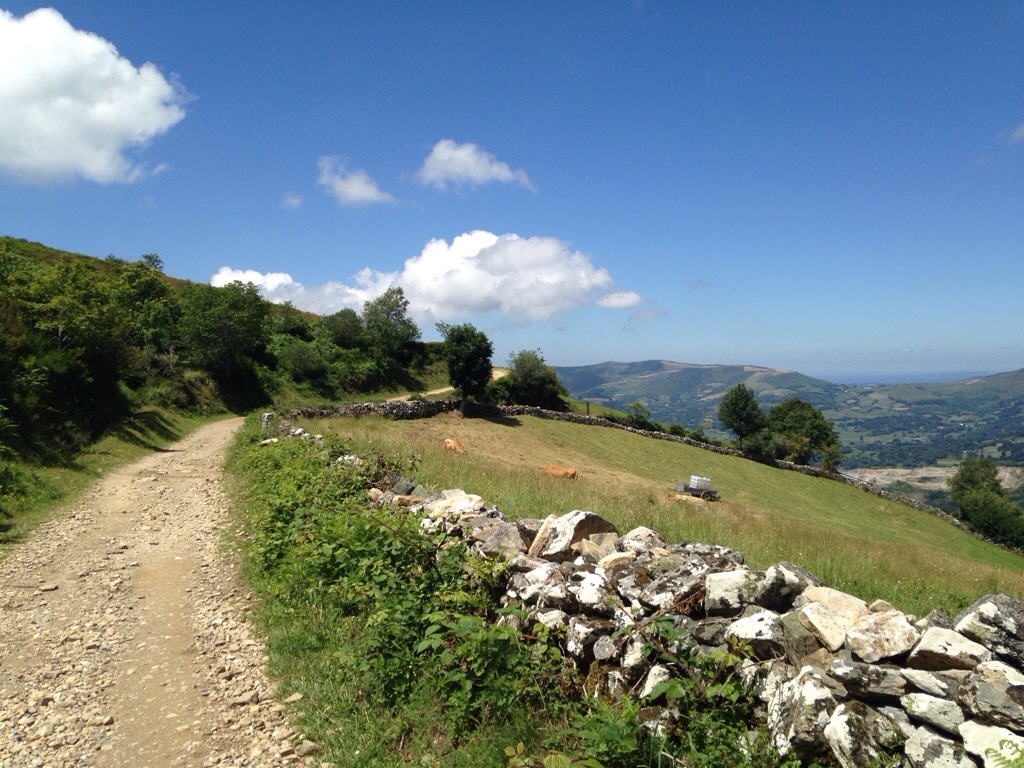